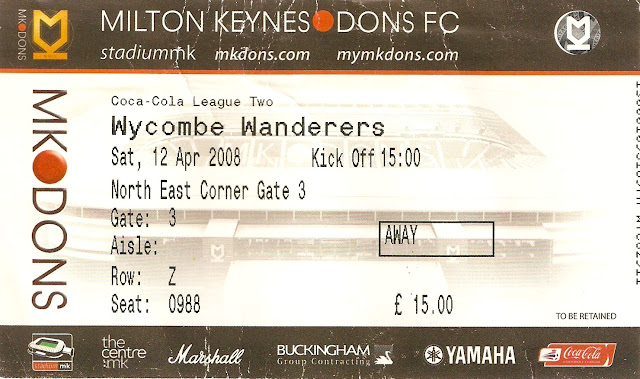 The stadium was opened in July 2007 when a young Chelsea side were the opponents for a friendly. At that point, the stadium only had its lower-tier built with the upper added at a later date. This extra capacity was mainly built for the 2015 Rugby World Cup, the stadiums biggest attendance was for the Fiji v Uruguay game in that competition that attracted a crowd of 30,048. The stadium has also hosted the party for Milton Keynes 40th anniversary, the Collectomania fair and various Jehovah's Witness conventions. The record attendance for football is 28,127 which saw Milton Keynes 5-1 defeat to Chelsea in the FA Cup.

The club had remained in League 1 for the vast majority of their stay at the ground, though 2015/16 saw a 23rd place finish and instant relegation. Last season saw them finish 23rd in League 1 and suffer relegation to League 2 where they sit in the playoff positions at the time of this blog update (March 2019). A record run in the FA Cup saw Milton Keynes reach the FA Cup 5th Round in 2012/13 when they beat Cambridge City, AFC Wimbledon, Sheffield Wednesday and QPR prior to a 3-1 home defeat to Barnsley. The 2014/15 season saw a memorable League Cup runs as they beat rivals AFC Wimbledon 3-1, Manchester United 4-0 and Bradford City 2-0 prior to a 4th Round 2-1 defeat to Sheffield United.

Wycombe were robbed of 3 points in the game billed as "The Big Bucks Derby" as they drew 2-2 with Milton Keynes. I've made my feelings clear on the Franchise issue before, but have to concede that Milton Keynes FC (or whatever they choose to call themselves) has potential. If only they had done it the right way by working their way up honestly then I'd have more respect for them. Wycombe started brightly and could have been ahead when Oakes's free-kick was saved well by MK keeper Willy Gueret on 33 minutes. A few minutes later and Wycombe took a deserved lead, Scott McGleish heading in from around 6 yards. Another free kick from Oakes led to another good effort but it was Wycombe who were good value for their 1-0 lead at half time. Wycombe made the mistake of defending too deep as the second half commenced. Time and again we put undue pressure on ourselves by getting the whole team playing in the last third of the pitch. As a consequence, we have no one to play the ball to and allow the other team to pressurise us. Wycombe should have had a penalty on 68 minutes when McGleish was fouled by MK keeper Gueret. He needed treatment for his injuries, but the referee merely waved our appeals away. Milton Keynes got their equaliser shortly after, but there was more than a suspicion of offside as Aaron Wilbraham netted. Their joy was short lived however, as a fantastic volley from Scott McGleish scored from a wonderful volley. Delroy Facey should have really wrapped the game up minutes later but he was foiled by the keeper. Another good contribution from the big man though, hopefully with some match fitness he will put chances like that away in future. The 4th official signalled 5 minutes of injury time but Wycombe were still looking comfortable. But on 94 minutes a corner was met by the head of big defender Sean O'Hanlon amid appeals by Wycombe players for a push in the box. 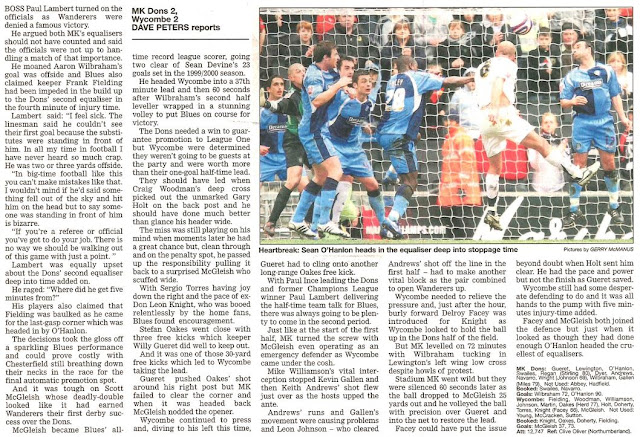 Looking back, I regret going and giving them full-pricer admission, but I was going to every single Wycombe game home and away back then and had not yet discovered the joys of groundhopping. I'd been the previous month to see the reserves play in the Berks & Bucks Cup Semi-Final and paid a nominal £3 entrance fee. I just wish I'd got out of the habit of going to Wycombe home and away earlier than the following August when I broke a seven-year run. Anyway, back to that County Cup tie, Wycombe won with ease, running out 3-0 victors thanks to goals from George Daly, Dan Fitchett and Matt Phillips. Wycombe reached the final, but put out the youth team and lost 3-0 at Chesham United. It's extremely unlikely that I will return due to the way the club was established. 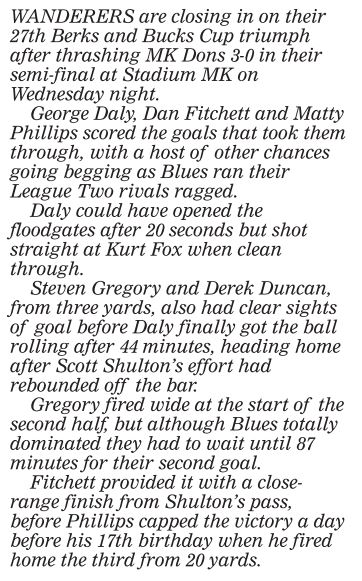 STADIUM MK is a smart and modern stadium, though it is currently too big for its club's needs. At a cost of £50m, the 30,500 capacity was originally smaller but since my visits, seats have been added in the upper tier. These seats are very high-spec and are padded like those at the Emirates. There's plenty of empty ones too, with the average attendance being a touch over 7,000. I'm unsure of food and drink options and most pubs near the ground do not admit away fans. There are various chains on the adjacent retail park including TGI Fridays, Frankie & Benny's Nandos and Pizza Express as well as an Ikea. Otherwise, it's Fenny Stratford (a mile) and Bletchley (just under two miles) that have the nearest options. 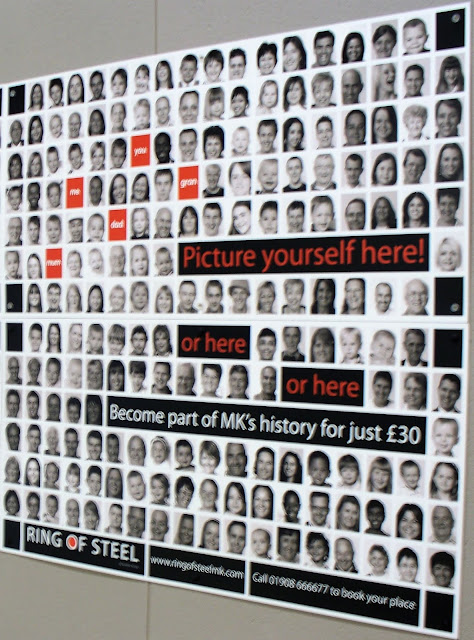 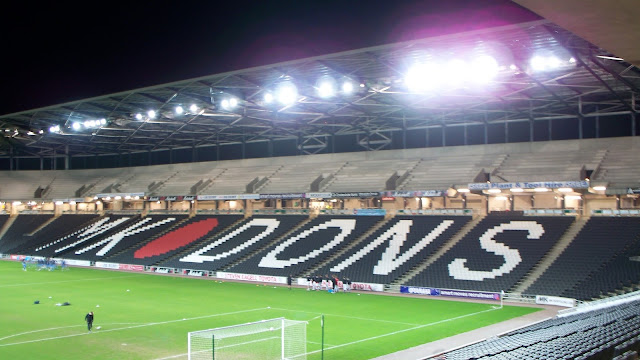 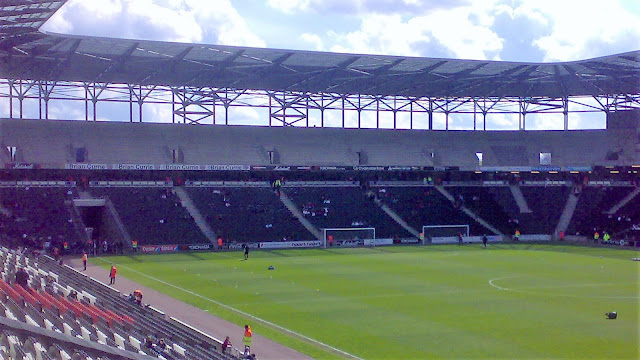 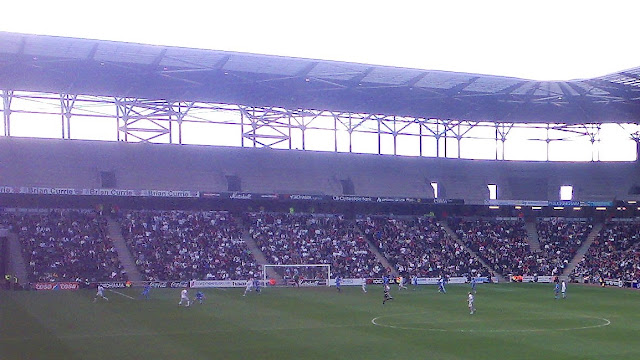 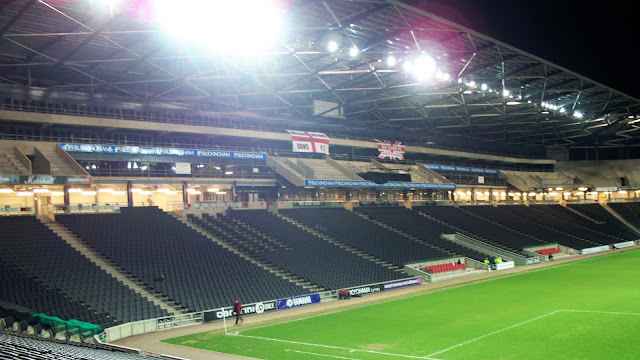 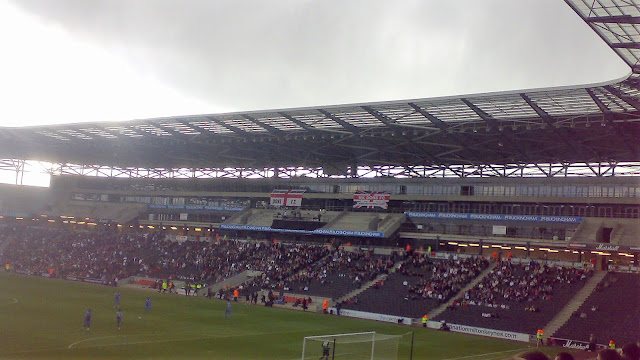 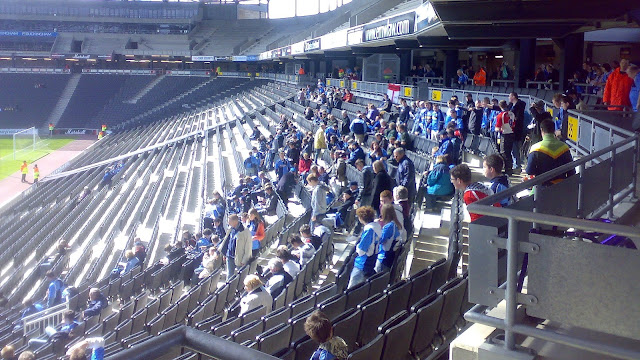