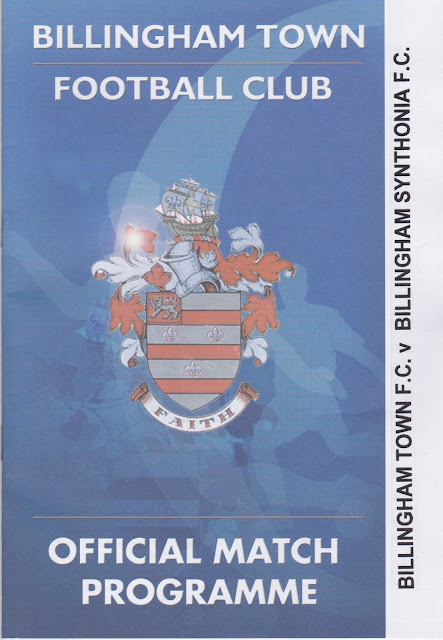 Billingham Town FC was formed in 1967 under the name Billingham Social, but it wasn't until 1982 that they joined the Northern League and change their name to the present day one. They have been in both Division 2 and Division 1 of the Northern League, spending the bulk of their time in the higher league. Until their inevitable relegation at the end of the season, they have spent since 1997 in  Division 1, finishing a record high of 3rd in 2003. In the FA Cup, they made it all the way to the 4th Qualifying Round before losing to current Conference playoff chasers, Gateshead. That same season also saw their record run in the FA Vase, reaching the 4th Round. The most famous player to play for the club was Gary Pallister, prior to his move to Middlesbrough.

Billingham Synthonia were doing quite a lot better than their local rivals, sitting in 10th at the start of play. They got their name from a fertiliser made by the local chemicals firm ICI. They were formed in 1923 and in 1950 went an entire season without conceding a league goal at home after a last day penalty save kept their record intact. The most famous player to appear for the club was the legendary Brian Clough, while Aidan Davidson (who went on to play for Bolton) Craig Hignett, Curtis Fleming & Bernie Slaven (all Middlesbrough) have also played for the team. They have spent the whole of their history in the Northern League, winning it on multiple occasions, the latest being in 1990. They have made the FA Cup 1st Round on a few occasions, most recently in the 1950s when they faced Carlisle, while in the FA Vase they got to the semi-final in 2007, before losing out to AFC Totton on penalties. They even made the FA Trophy Quarter Final in 1993/94, losing out to Conference side Woking after a replay.

Billingham is a small town in the North East, close to it's more well-known neighbour, Middlesbrough. The company that sponsored Middlesbrough FC during the 1990s was based in the town up until that time and provided work for many people in that area. The company also lent its name to the visiting team today, but more of that later. Quite a few famous people were born in Billingham - mainly footballers, most notably Gary Pallister who was an integral part of Alex Ferguson's early league winning teams at Manchester United. More notably from a Wycombe perspective, Tommy Mooney who spent a couple of seasons with us when John Gorman and Paul Lambert were in change and who was a real fans favourite. 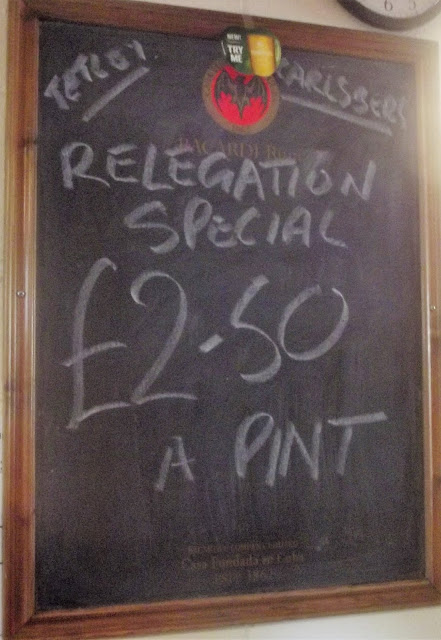 
As I had been to Spennymoor (the 3PM game on the hop) I was looking for an alternative game and had chosen Blyth Spartans v Whitby in the NPL Premier. But time would be quite tight getting from the hop's Bishop Auckland game to Blyth. So when I saw that fellow hopper Anders was going to Billingham for the town's local derby between Town and Synthonia and that it was kicking off an hour earlier at 11am, I jumped at the chance to go. For the third and final day of my groundhop, I woke early just before 7. After checking Facebook and watching some videos on YouTube I had a bath and cleaned my teeth before leaving for my first game at Billingham at 8.50. I stopped at ASDA in Stockton on the way as I needed to get some petrol for the journey home I then popped across the road getting some diet Irn Bru and a dark Toblerone for the game, as well as some aftershave and deodorant to take home. I arrived at the ground just after 10 and after checking Facebook and listening to the radio for a bit, I went into the ground, paying £7 for entry and a programme. I got some pictures of the ground and a Bovril before having a chat with a couple of hoppers, John and Anders. For the game, I chose to sit in the stand for a change, as it was elevated and had a great view. 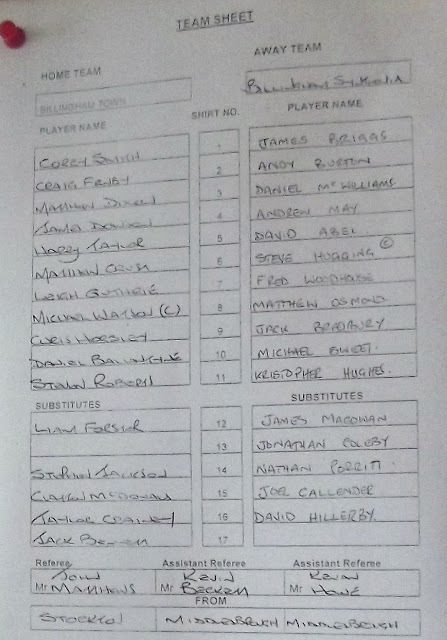 Billingham Town have had a dire season, setting all kinds of unwanted records and have conceded over 200 goals this season. So maybe it wasn't surprising at all when Synthonia opened the scoring after just 5 minutes after the home keeper misjudged a cross and Michael Sweet's shot went in off a Town defender. They had chances to further extend their lead, hitting a post and having a goal disallowed for offside on 16 minutes. Fred Woodhouse did get their second on 19 minutes and it looked like being a bleak afternoon for the hosts. Their misery was at least put on hold for a while as that was how it stayed at the break. At half time I saw that another hopper, Splodge, had an absolutely delicious looking pie, he was at Bishop Auckland. I looked on my sat nav as I fancied a slice, but it was 35 minutes away and then I would be tight getting to Blyth so I decided to give it a miss. A nice little bonus was that I got to draw the half time raffle. OK, so it was only a strip of raffle tickets out a Tesco carrier bag, but it's another experience to add to the list. The guy who sold the raffle tickets complained to the tannoy man that he didn't get a mention in comparison to the girls. So the announcement came 'The big ugly git who sells the raffle has the result' He had been on form all afternoon, warning Synthonia that he 'knew where they lived' as a joke. The home side managed to stem the tide until 68 minutes when Michael Sweet got his second and Billingham's third when he slotted past the keeper from inside the area. Town had been unlucky not to get one of their own a minute later when the Synthonia keeper made a good save. But straight up the other end, it went and an even better save from the home keeper prevented an own goal. Town were even more unlucky when they had a shot that hit the underside of the bar and then got cleared off the line. In the end, it stayed at 3-0 and was a good start to my third day of hopping.

BEDFORD TERRACE is a great ground for the level the club are at. Pride of place goes to a stand seating around 200, plus room for standing behind. This offers a great view of the action and has no pillars. Opposite is a covered terrace, again holding around 200. The rest of the ground is open, including a small terrace behind the goal. The bar and the tea bar are pretty decent, though I only sampled a Bovril. They have badges, stickers and mugs on sale from both. Overall, I'd recommend a visit here, the ground has character and the club is welcoming and friendly. 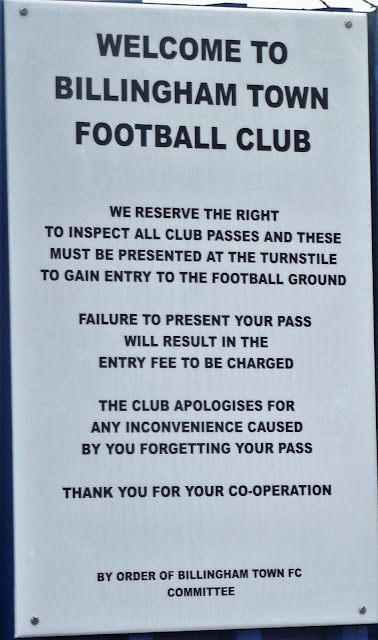 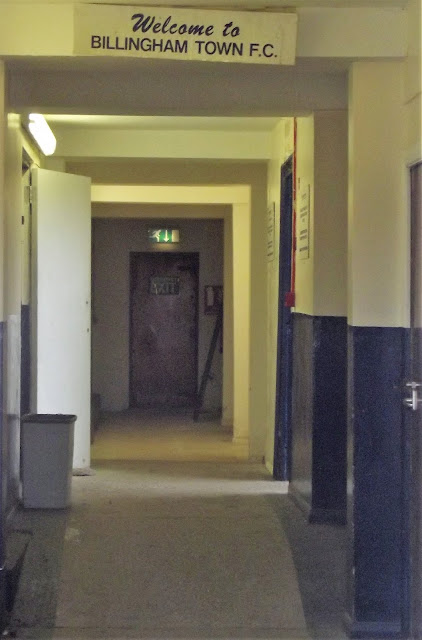 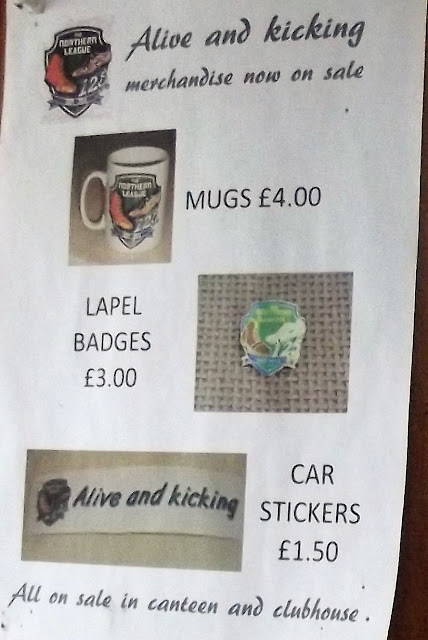 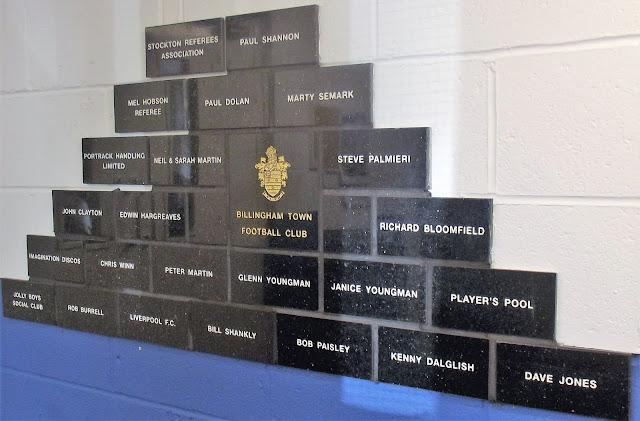 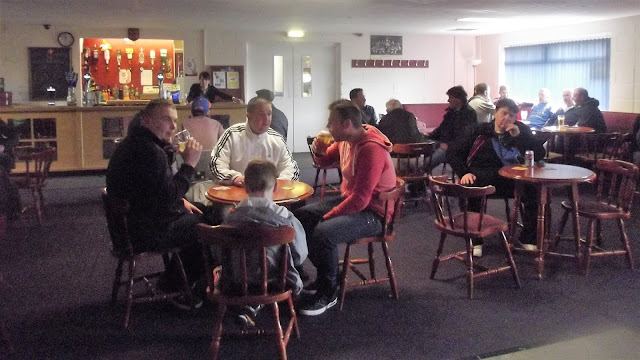 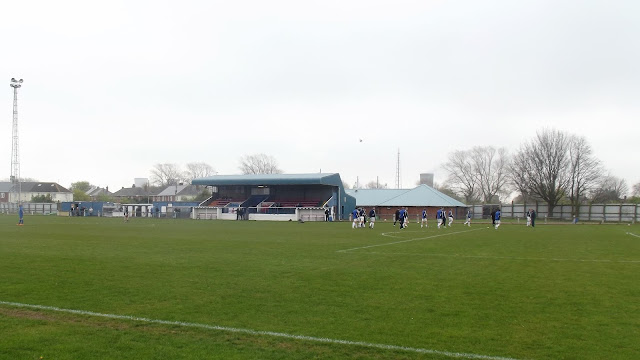 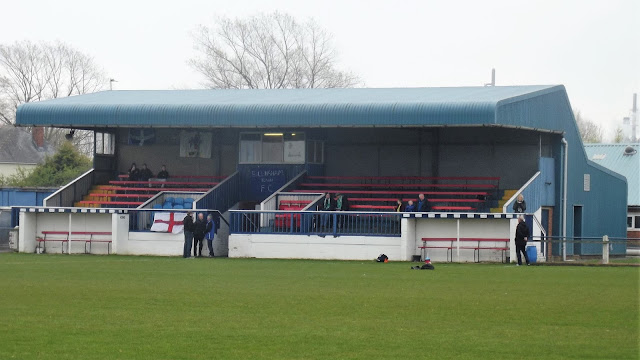 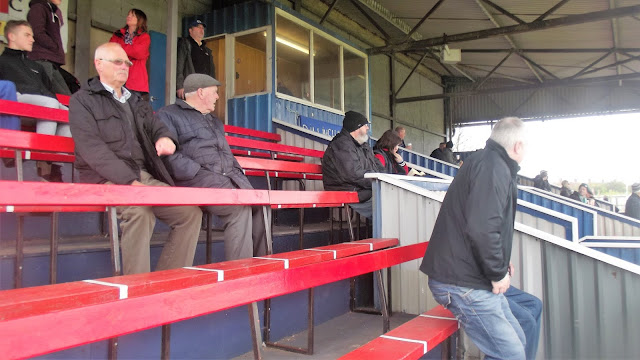 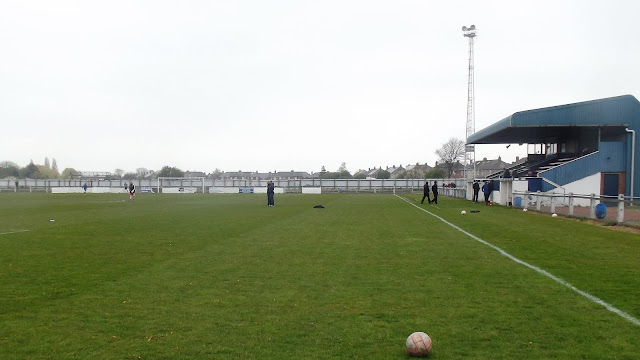 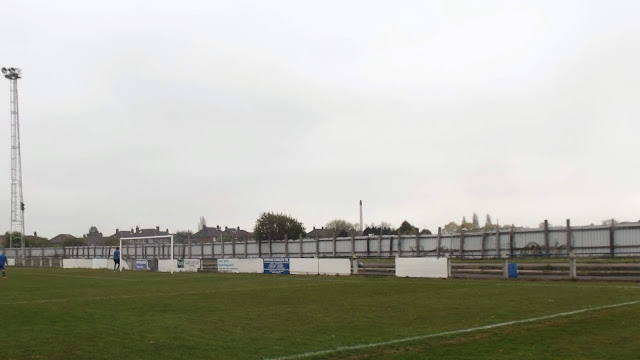 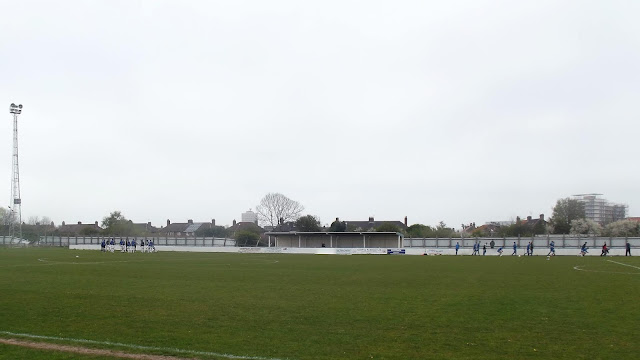 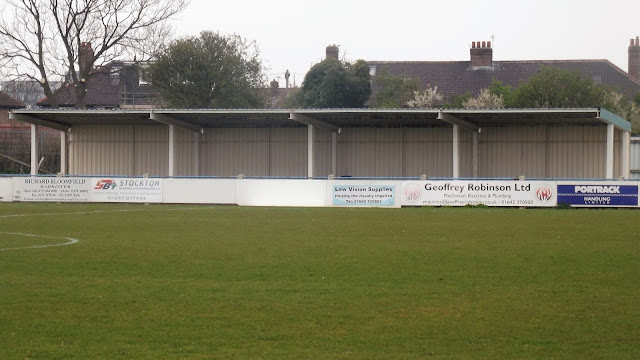 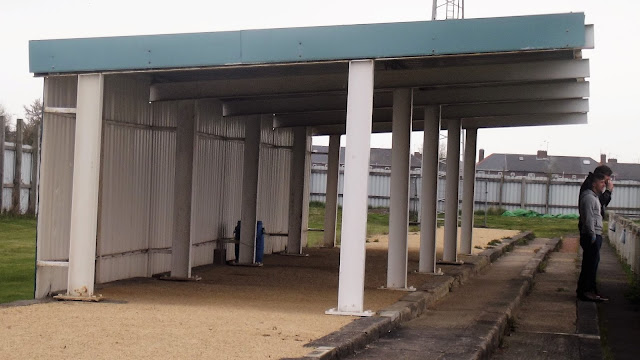 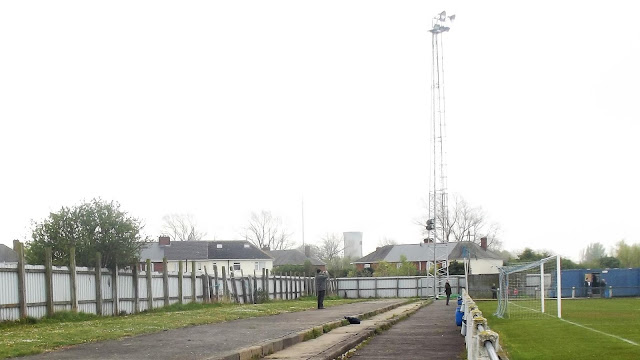 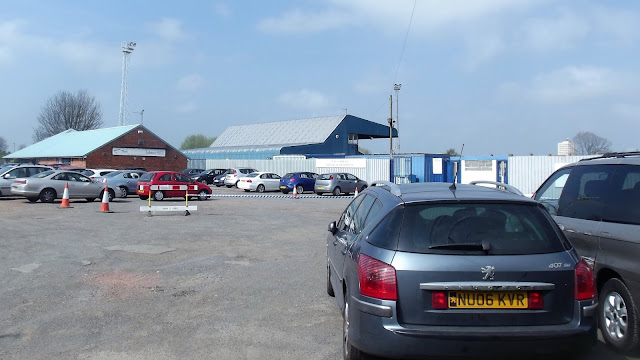 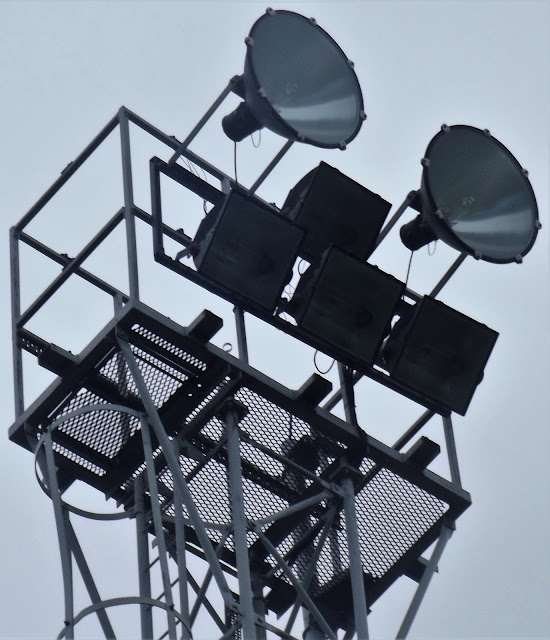