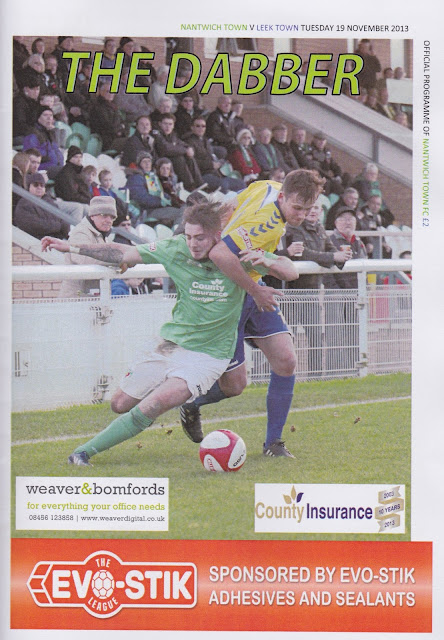 After a great couple of weeks holiday and football trips, it was back to reality. Firstly on the football front, swapping the good company of Grimsby fans for the good company of my usual Wycombe friends. It was the same old story on the pitch too, as Wycombe's woeful home form and performances continued. It's now been over a month since we last won at home in the league, and even that was a fortuitous win against a poor Torquay side. After playing well and knocking the ball quite nicely against Crewe in the FA Cup the previous week, it was normal service resumed as we looked really scruffy and edgy all over the pitch. And a complete lack of conviction in the final third meant that we had hardly any chances, while Cheltenham Town could and should have had more, had it not been for the brilliance of goalkeeper Matt Ingram.

I had always been planning to do a groundhop this game, and with Anwar watching England v Germany at Wembley I thought why not give some Wycombe mates a lift up to Crewe and do a game up there. I immediately spotted Nantwich which was only 5 miles away from Crewe and fortunately it was still on after the weekend's fixtures when FA Trophy replays could have seen it moved. I still had a number of backups though, should the weather not play ball, and of course had Crewe v Wycombe to fall back on, but I had been there so many times and I wanted to try something new. I'd been to both grounds before but had never seen either team play as far as I could remember. We were on the way back from somewhere, Macclesfield possibly and luckily enough Nantwich's ground was open for a wedding reception, which I accidentally walked in on, then beat a hasty retreat before anyone noticed. I then found my way down the tunnel and onto the pitch for a sneaky couple of pictures. The stadium looked really smart with an impressive main stand and I was looking forward to returning for a game. 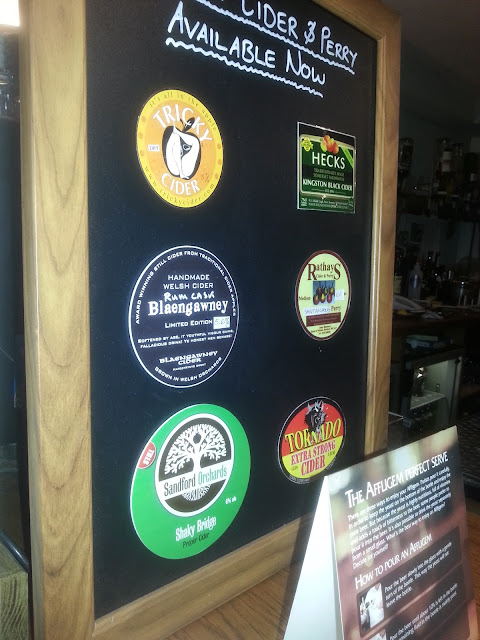 On the day we were planning to go to Birmingham shopping on the way up to Crewe. We did so, leaving Wycombe at 10.30 and getting to Birmingham just after 12. In between the shopping we went for lunch at Pizza Hut and took advantage of the all you can eat buffet for £7. We then went to ASDA Supercentre in Tipton and I had done a large chunk of my Christmas Shopping with my staff discount. I was in a pretty good mood, though something did sour it. Some dopey Brummie smashed into the back of me, and although there looked no damage at the time, to the extent that we went off without exchanging details - big mistake on my part, I was later to learn that it had taken some of my lights out. The boot also felt different when you opened and closed it, but still worked thankfully. It wasn't a very nice thing to experience either as it was at a busy junction. We got to Crewe about 5.30 and after dropping off people at Crewe I realised I had a fair wait till I got to Nantwich. I remembered last time I went to an excellent place called the Hops Belgian Bar where I tried some new ciders. I am happy to report that it is even better now, and I had a couple of halves of the weakest ciders that I had not tried. Firstly a Blaengawny Rum Cask cider from Wales, and then a pint of Rathay's Perry. I met some people from the Wycombe Wanderers Independent Supporters Club who loved the place as much as I did and who were on the ale trail. As I was driving I had to be careful and so waited for a bit before setting off again and also had some food and plenty of Irn Bru. I felt perfectly fine, but you never can be too careful as my license is invaluable. 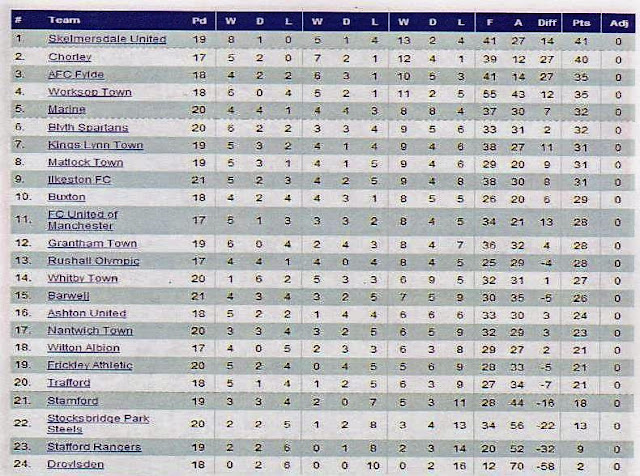 I got to Nantwich about 7.20, with it being just 15 minutes down the road from Crewe. I feared the worst when I saw a load of cars heading out of the car park and thought the game had been called off due to a frozen pitch. But whatever they were escaping from, it wasn't the football as someone confirmed to me that it was still on, and I could see the players warming up through the gap in the fence. First port of call was the club shop, where I got the nights programme for £2 and a book called ' Get Those Sheep Off My Pitch' for £3. I might have got something else, but it was a bit expensive and I didn't have a huge amount of cash on me. The entrance charge was £9, quite expensive for the Doodson Cup where a lot of reserve players get their chance. As soon as I got in the ground I got some chips for £1.70 which were freshly cooked and very nice. I went around the ground getting some pictures before settling on a seat at the back of the neat stand. I later discovered that Wycombe took 81 fans to Crewe and that including me there were 82 at tonight's Nantwich game. So me coming here instead really made the difference. 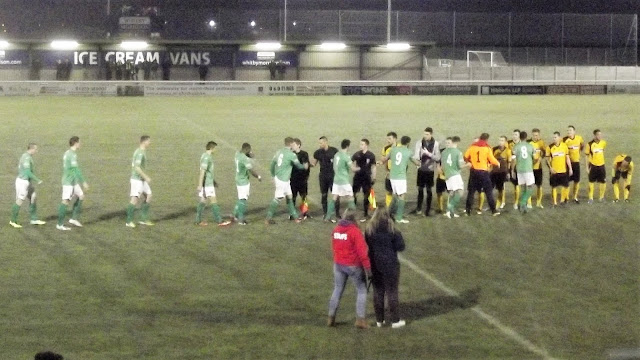 Despite being a chance for some of the squad players to get an outing, it was still a decent game. The home side was 17th in the Premier Division of the Evostik League, whilst despite being a league lower, Leek Town were flying at the top of the table in the 1st Division South. So it seemed quite an even pairing. It was certainly a level opening 15 minutes with Leek having the first chance to the game through Neil Maguire. Moments later it was 1-0 to Nantwich when Ben Deegan fired into the bottom right-hand corner. It was really all one-way traffic from then, aside from the occasional Leek attack. It was no surprise when Nantwich extended their lead on 35 minutes with a great curling shot from a free kick by Andy White.  That was how it stayed at halftime, so I popped into the bar and watched some of the England game. True to form our overrated and overhyped flops flattered to deceive and I saw Per Matersacker's header give Germany's second string a win over pretty much the first choice England team. I saw that Wycombe were drawing 0-0 up at Crewe but were well on top. The game out on the pitch continued in much the same vein. Leek's Andy Bratt lived up to his name when he was sent off for pushing a Nantwich player in the chest. 3 further goals in the second half put the icing on the cake for the home side. They probably saved the best till last when a great free kick hit the left-hand post and was followed up by Harry Clatton to complete the rout. 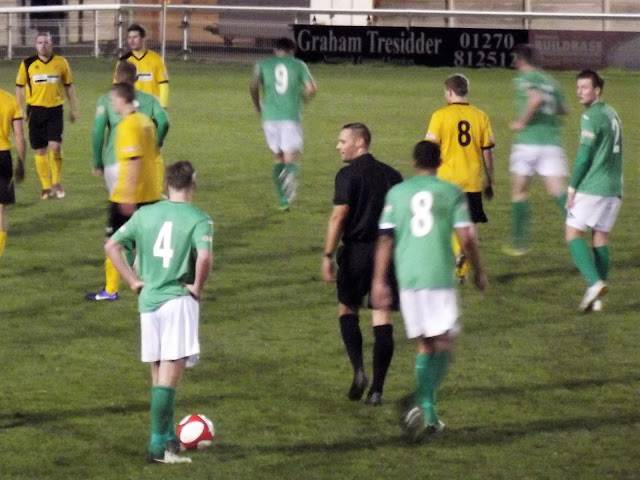 Wycombe won 2-0 at Crewe with goals by Steven Craig and Gary Doherty. Crewe sounded awful despite being a league higher than the Chairboys and the dying embers of the game made good listening, as did the depressing calls from Crewe fans who phoned and emailed after. I got back to Crewe really quick, in around 10 minutes and had to wait while Paul got his food. We eventually got out of Crewe just before 10 and someone signalled that my back lights were out, pretty much certainly due to the earlier knock. We pulled over at Keele Services and I checked all the lights. It was just the main lights that were out, so I had to drive all the way home with the fog lights on so people could see me. I had a few clever clogs flashing me to let me know that my fog lights were on, which of course I already knew. We eventually got back into Wycombe at 12.30am, and I arrived home 15 minutes later. I stayed up for just over an hour but couldn't really get any proper sleep and I was pretty tired the next morning. At least I got my lights sorted the next day, it turned out to be nothing more than blown bulbs, which my regular garage replaced for free - the real benefit of being a good customer. The back still wasn't right - though there was no visible damage the boot required a firm shut to close, although as I didn't swap details, there isn't much that I could do about it. A lesson learned there, even if everything seems OK, still err on the side of caution in case something else crops up.

THE WEAVER STADIUM is a smart and modern ground that has been home to it's town's team for around 10 years. The main feature of the ground is the main stand which holds around 400. Opposite that is some cover for around 500, while the rest of the ground is open. There is a club shop outside which has a small range of stuff at varying prices. The tea bar is very good judging by the chips that I had. The bar is up the top of the stand and is pretty much as you would expect. It certainly provided a warm haven for me at halftime tonight. 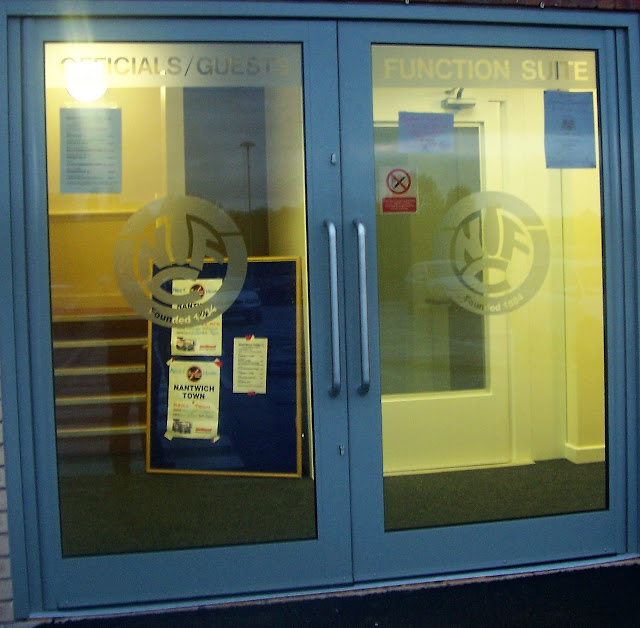 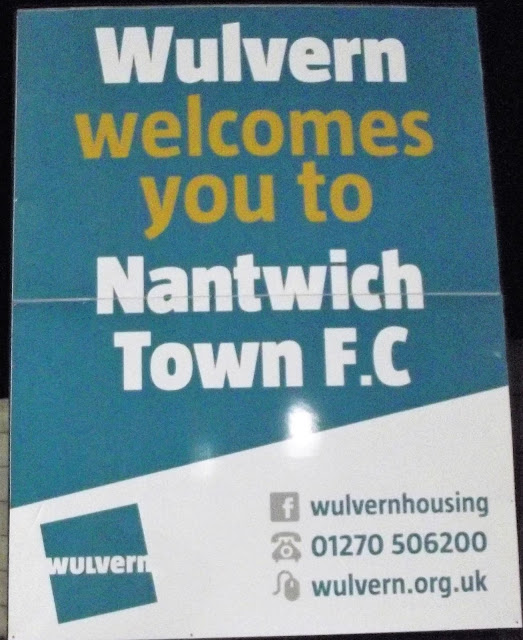 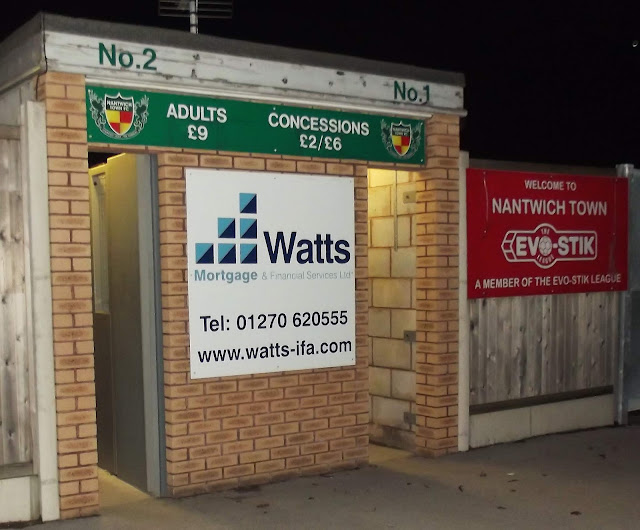 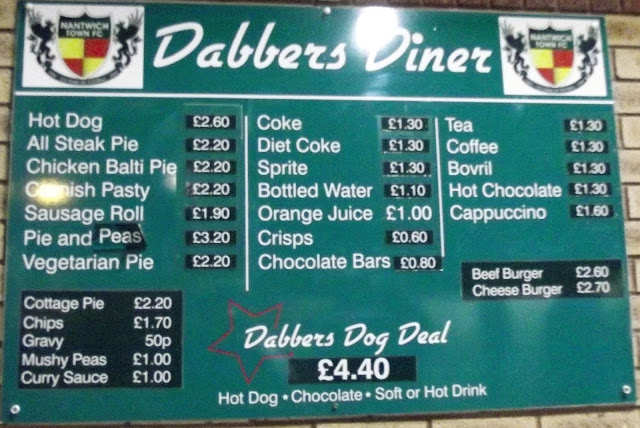 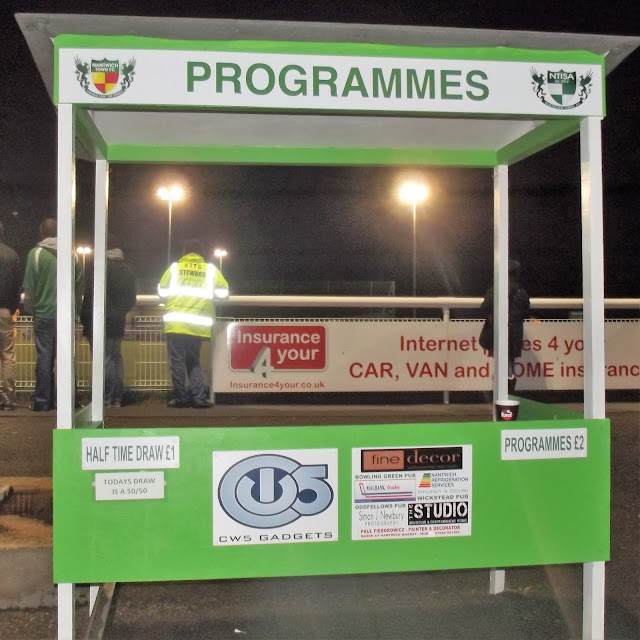 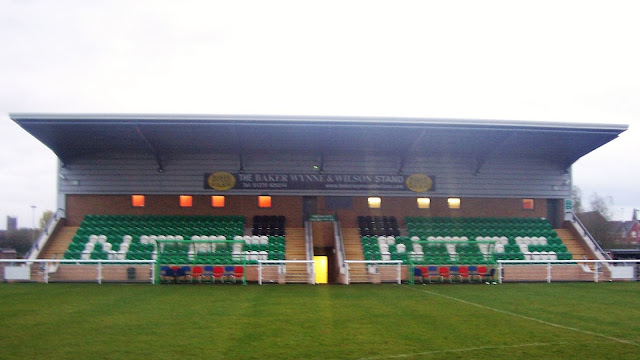 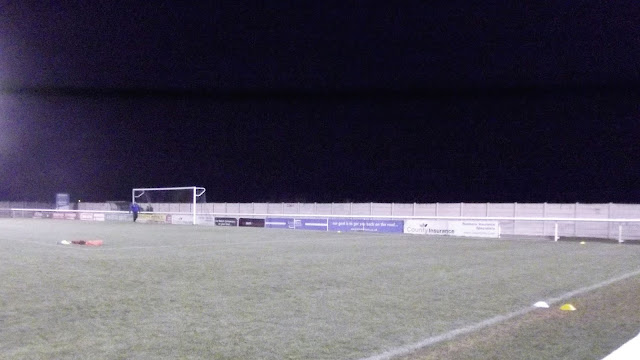 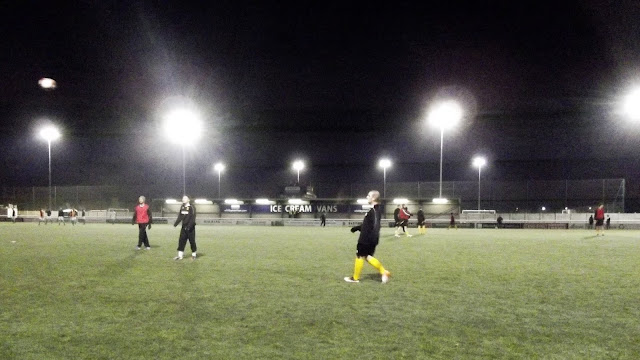 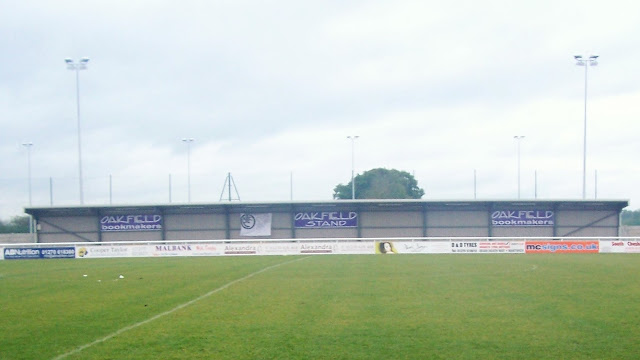 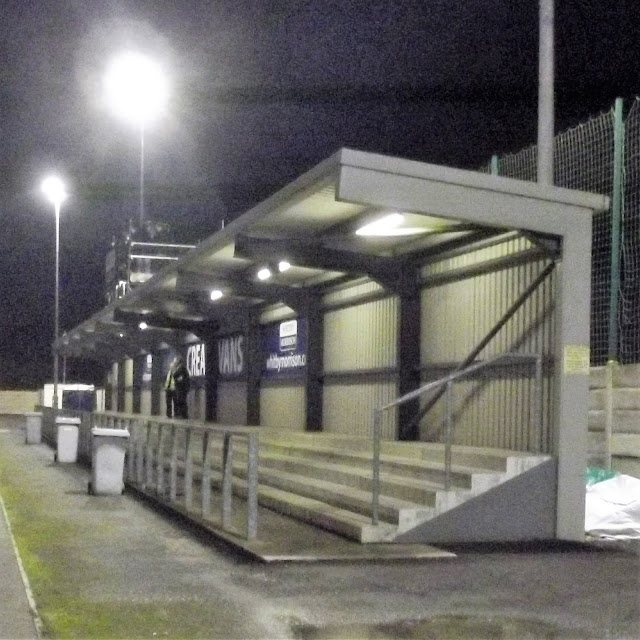 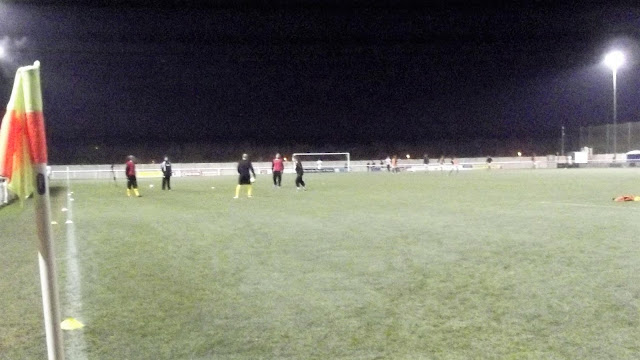