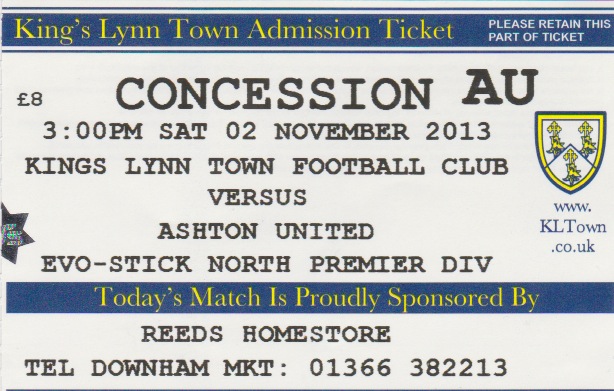 MY SEASON SO FAR

I thought I'd take some time to reflect on my statistics so far for this season, and indeed for all time, this being before today's game.

I've got a couple of expensive games coming up in Atletico Madrid and a few days up north again but I am pleased to be sticking to my budget per game (£17.50) so far, even if I have been to a few more games than I thought I would. I initially estimated 100 but maybe I will do more now the rate I am going.

Wycombe were up at Accrington Stanley on the day of this game, and I was never planning on going to that. The performance at home to Bury last Saturday was awful and did nothing to change my mind. The club hadn't covered itself in glory in the week either - moving the Boxing Day fixture against Newport County to a 12.30 kick off without consulting any of the fans. I am a great fan of the supporters' trust and fully behind them, but surely the whole point of being run by the fans is getting them involved and they certainly hadn't on this occasion. Also, the £15 minimum price for the FA Cup game against Crewe was a bit much, the opponents hardly likely to set the pulse racing and we had played them at this stage of the competition last season too. I just hope that we put in a better performance than last time - the 4-1 drubbing at Gresty Road was one of the lowlights of Gareth Ainsworth's spell as manager. 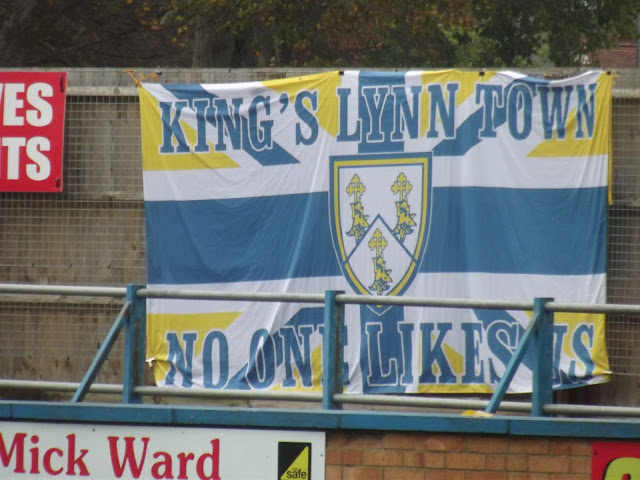 The trip to King's Lynn came about when I presented Anwar with a list of games I fancied, and he picked that one. It was a wise choice. A long-distance trip on a Saturday, plus there were lots of grounds I could visit along the way to get pictures. That would have been impossible on a midweek with the nights drawing in. Plus there was a beer and cider warehouse place that I could visit and stock up on goodies without paying the postage in Kings Lynn. The ground was only minutes from the town too, with some decent shops, though sadly no pubs to write home about, cider wise at least. I left quite early on the day, around 8am as the journey was going to be broken up by going to 6 football grounds. My Sat Nav helped even more than usual - I was able to put all the destinations in and I wouldn't have to touch it till I got to Kings Lynn as once I had been to the ground it would automatically go to the next stop. I picked Anwar up just after 8.30 and we were on our way.

The first stop was CRANFIELD UNITED. It was near Bedford and till recently they were in the Spartan South Midlands League. However financial constraints led to them withdrawing from that league and taking the place of there reserve team in the Bedfordshire County League. This ground was fairly basic and not looking it's best due to stuff all over the pitch for the nights firework display. 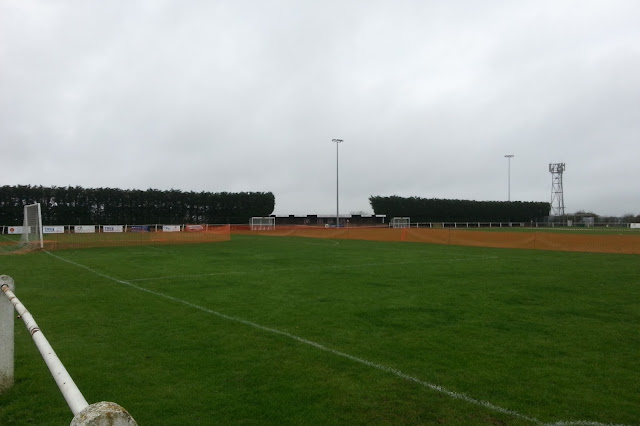 Next up was AFC KEMPSTON ROVERS. Not a great start as the club person who approached me when I got out the car was very rude and abrupt. If I wasn't such a peaceful person I would have chinned the twat. He kept going on about image rights and that I would have to write to the club in advance. He said it might upset the sponsors if I took pictures of the ground. After I had told him I had never had a problem before he relented and let me in to take pics and was quite friendly towards the end. Anyway, they were from the United Counties League and had a very impressive set up for this level. One decent sized stand with other facilities too, and well kept too. 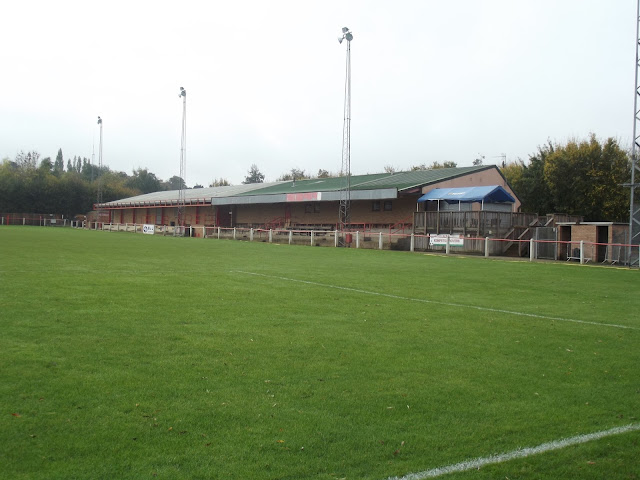 Third in line was EYNESBURY ROVERS, a very neat ground and worthy of a higher placed club. Another from the United Counties League, this was again well kept and had a stand and another small area of cover too. 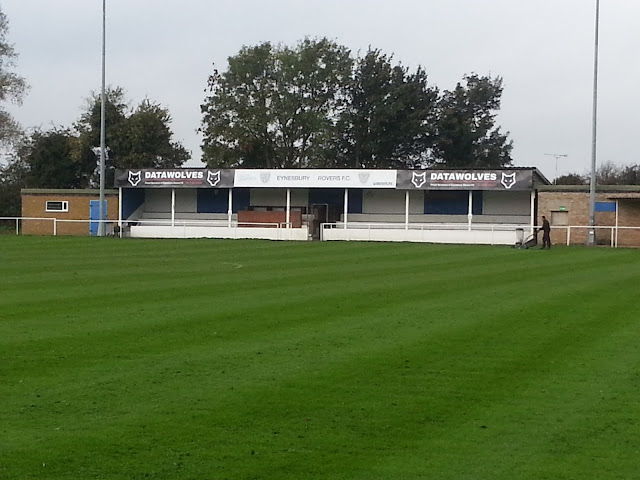 Moving on was GODMANCHESTER ROVERS, this time from the Eastern Counties League. My Sat Nav's POI was a bit out for this one, taking me to a random sports centre instead of their ground. Once I had popped the postcode in off their site though it was fine and turned out to be another decent ground. The people there were really friendly too and had a lovely dog. It was similar to the previous ground, though the stands were of the prefabricated type rather than properly built. But it won back points for the outside of the dressing rooms and clubhouse which were painted in club colours. 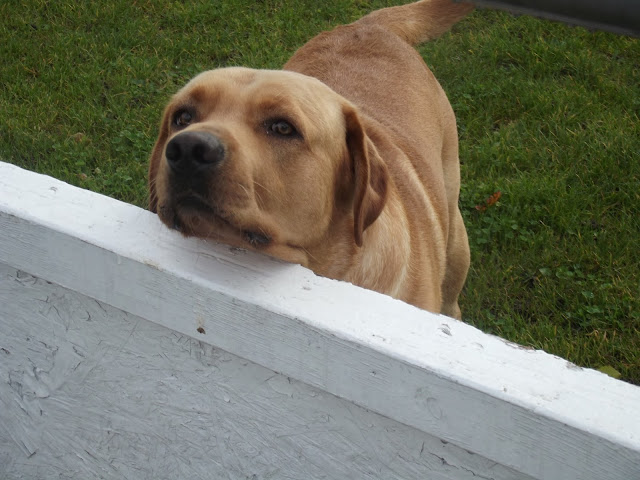 The penultimate one was nearby HUNTINGDON TOWN of the United Counties League, quite similar to the last one again. This had 2 small seated stands and a covered standing area. Not as colourful as the last one, and no dog sadly. Though the toilet proved handy. 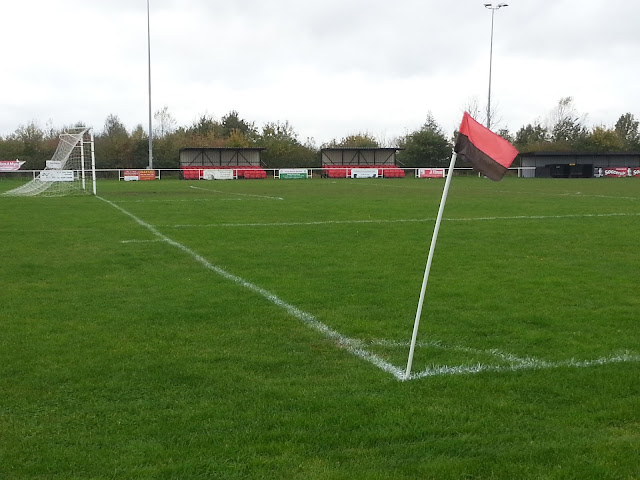 Finally, it was the turn of MARCH TOWN UNITED, back in the Eastern Counties League again, and one that I had been looking forward to since I had seen pictures of it earlier in the week on another blog. It is what purists would call 'ground porn' and had a great big wooden stand the type of which are pretty rare now. The back of it was painted nice too. Next to it was a single executive box which was really unusual in the fact that it stood on it's own. Opposite, was a standing area, covered that ran pretty much the full length of the pitch. This is one that I fancy visiting for a game, and another one where the people were friendly - we saw their team setting off for an away game as we arrived. 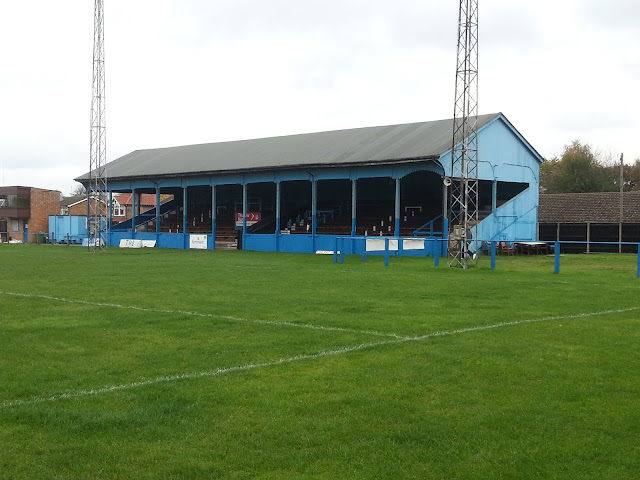 I had the beer shop in mind and was planning to go on the way to the ground. But in the end, I decided to do it after the game so we could have more time in town. It turned out to be a wise move as the town was excellent, big and lots to do. The first priority was lunch, we fancied a sit-down meal and so I suggested Wetherspoons, in this case, called The Lattice House. I was pretty satisfied with the deal of the Gourmet Chilli Hot Dog, served with chips and onion rings. It came with a pint of Thatchers Gold and was only £6.89 - bargain! I was even happier when I found out they did a proper cider that I hadn't had before - Farmer Jim's. It was lovely and an unexpected bonus. The food turned out to be just as good as it sounded too, and a nice portion that filled me up - which if you know me, is very rare! Anwar also enjoyed his fish and chips, so it was smiles all round 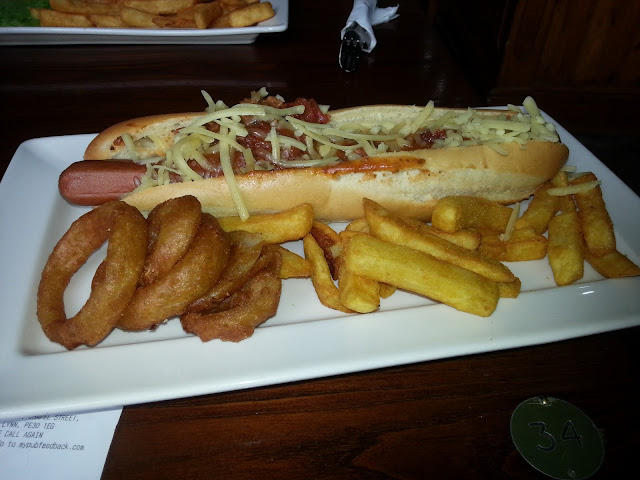 Next up it was time to hit the shops, tight git style. First up we went to CEX where I would have bought a couple of games, but the queue was about 15 deep despite the shop not being that busy. They are always so painfully slow at serving in there - a couple of people in front usually means a 10-minute wait, and Anwar was left waiting for 45 minutes in the Aylesbury one last week. I've always had to wait for ages to get served in there and it makes me wonder how they keep their customers. Next up was Cash Converters which yielded nothing. Success at last at UK Bargains where I got some toiletries and drinks for the footy. Then next door to Poundland which was very good. I got Terry Christian's book ' My Word' which I had been after for a while. A football book too and a couple of DVD's as well as some chocolate bars which are usually twice the price in other shops. We then went to the ground, putting our stuff in the car and getting to the ground about 2.50. If anything we could have done with more time in town, an extra 90 minutes would have allowed for another pint and a more leisurely stroll around the shops. We got into the ground and went and had a look in the club shop. I bought a pen for £1 to add to my ever-growing collection. We then went and chose a spot for the first half, standing under the covered standing side of the ground. For the second half, we went and sat in the stand, and both views were very good. A match report from the non-league paper is below. 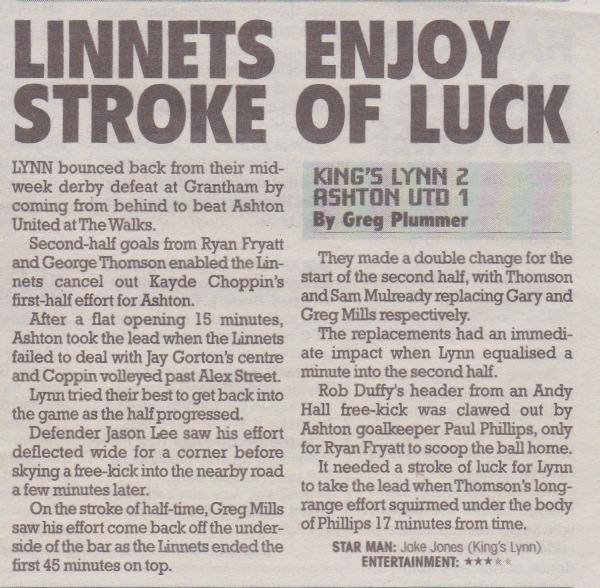 After the game we left the ground, having enjoyed a good day. I stopped at the Beers of Europe shop and picked up my order, they had a fantastic selection and it was a great opportunity to save on postage. On the way home, we listened to the Arsenal v Liverpool game on the radio and Anwar was delighted when his team Arsenal won. It was a slow journey home as it was all along single roads, and if one dawdler decided to go slow, everyone had to. After the game we listened to the phone in on Radio 5, as usual, it had some 'interesting' callers. One saying that Brendan Rogers should go after the defeat to Arsenal, despite Liverpool being in their best league position for donkey's years. Another was moaning about Man City, the very day that they thumped Norwich 7-0. Eventually, we got back to Aylesbury at 7.45 and I was back home at 8.10. I chatted on the internet for a bit and enjoyed a couple of my ciders with Match Of The Day. Firstly Yarde Cider, a dry one which was very nice and a good change from the sweet one I had with lunch. Secondly was one from Latvia, called Lucky Dog cider. This wasn't so good and tasted more like an alcopop, though I am still glad that I tried it. I fell asleep pretty quickly after all that, and went to bed happy, knowing that I only had to do one more day at work before getting two weeks off. 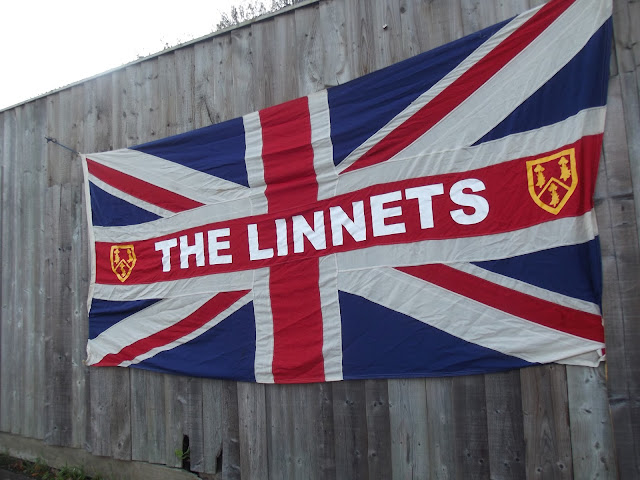 THE WALKS STADIUM is a brilliant ground for this level. The main stand must be one of the bigger ones in non-league, holding around 1200. It's raised well above pitch level, so the view is great, despite posts that get in your sightline. There is a small amount of terracing in front of this and that is replicated behind both goals. Though the terracing behind both goals is uncovered, the stand roof is so long that it covers the terracing in front too. The one remaining side is a large covered terrace, holding around 2000.

There is a club shop with a large range of merchandise and a limited selection of old programmes. This is actually in the 'Community Hub' which also has a bar and a cafe, none of which I tried. The town is a short walk away, over the road and through a nice park. The Wetherspoons there is the best one I have ever been to, and there are lots of other places too. Overall it's an excellent day out and should be on any serious groundhoppers 'to do' list. 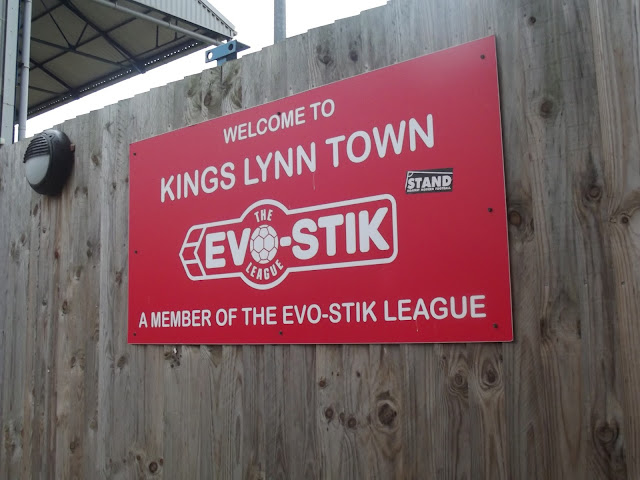 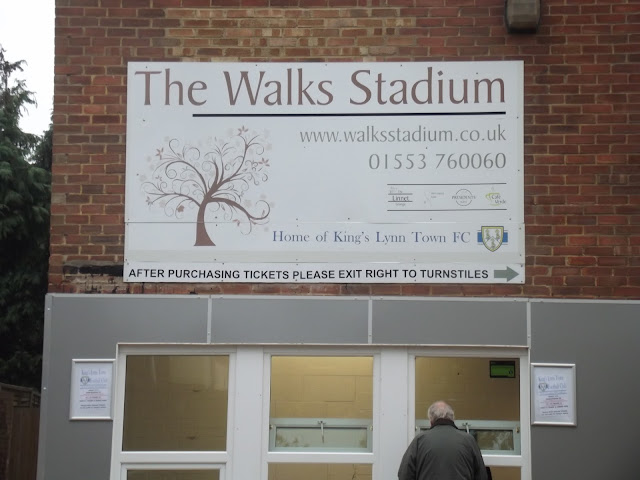 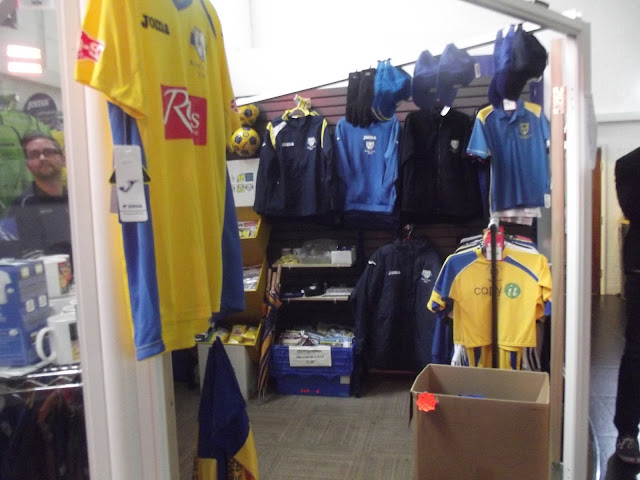 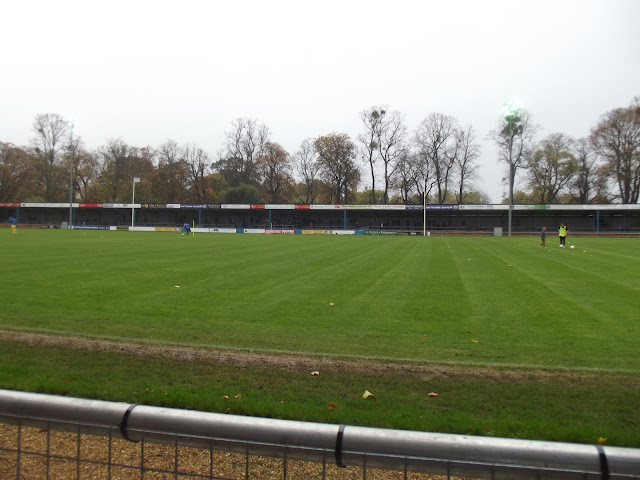 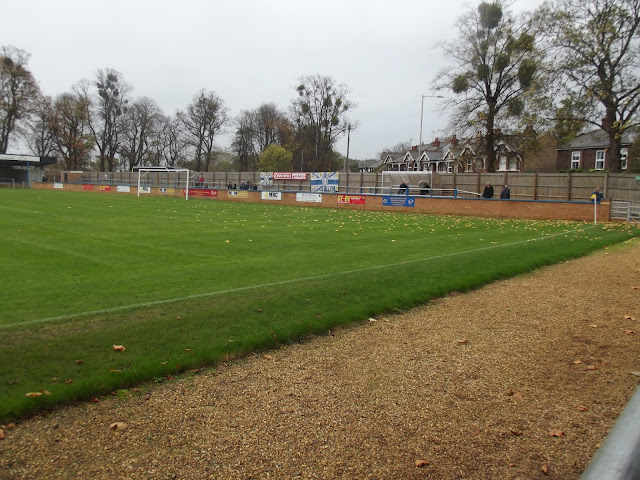 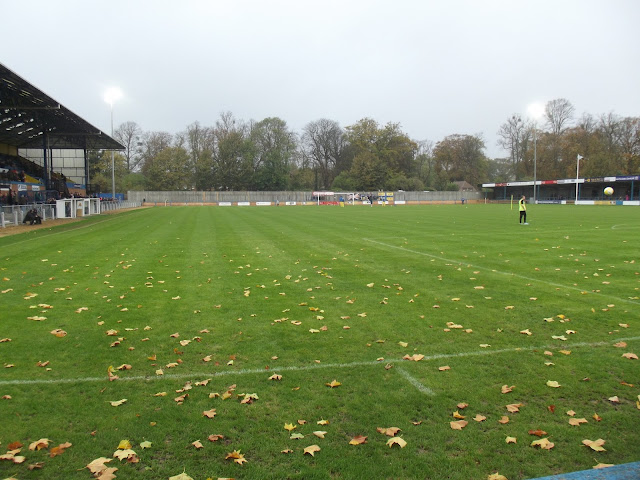 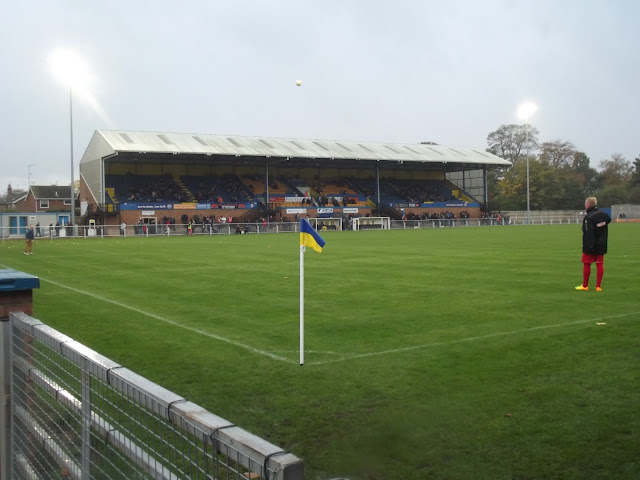 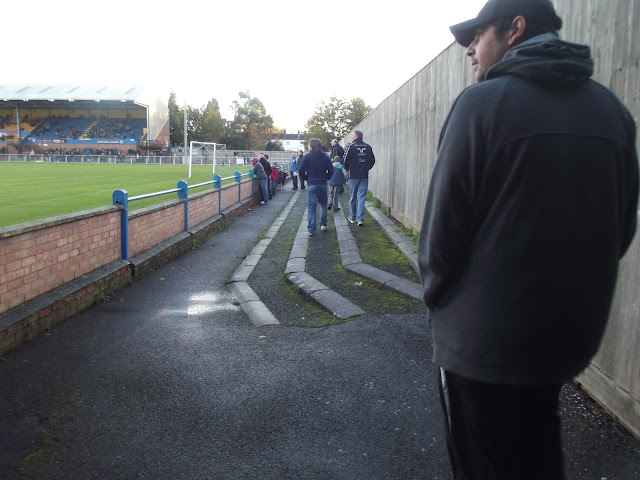 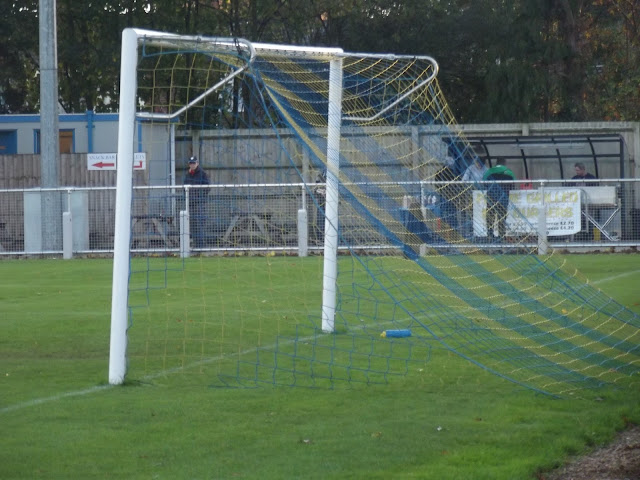 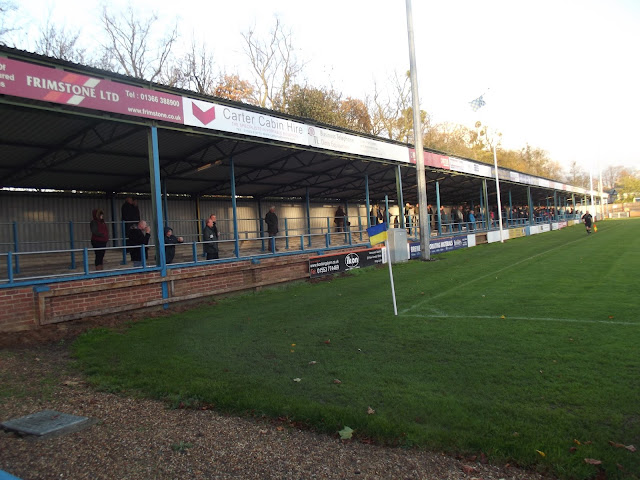 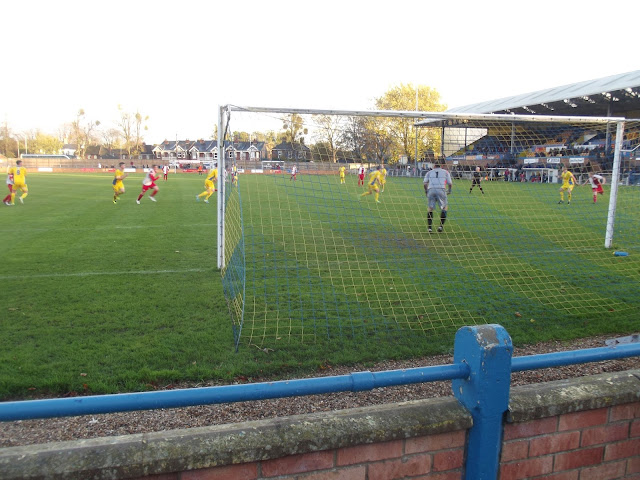 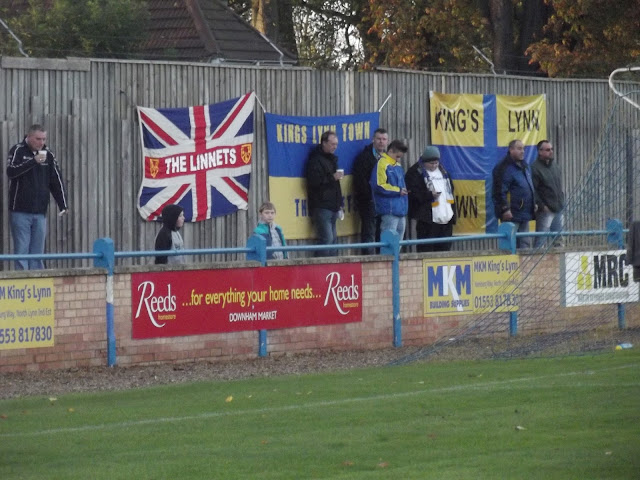