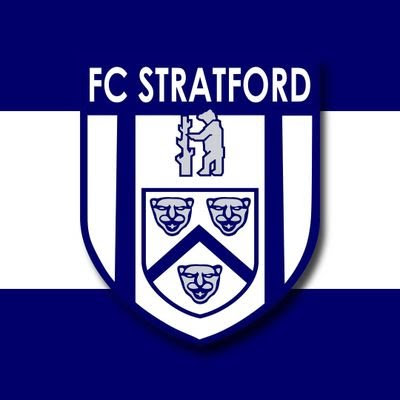 FC Stratford
Home Guard Club
Main Street
Stratford-upon-Avon
Warwickshire
CV37 7AY
Official Website
Twitter
Ground Number: 1066
Saturday 16th April 2022
FC Stratford 1-4 Milton United
Hellenic D1
FC STRATFORD - A BRIEF HISTORY
The club was established in 2007 and was originally set up as a reserve side of Stratford Town FC. They joined the Midland Combination Division 3 in 2009, finishing 5th in their first season before the league was disbanded and all clubs moved to Division 2 in 2011. The same year, the club broke away and became FC Stratford. The new club had a few unremarkable seasons in Division 2 before more reorganisation saw the team placed in the Midland League Division 3 in 2014. They would remain there until 2018 when a 3rd place finish behind GNP Sports and Boldmere Sports & Social saw them promoted to Division 2. The team found things tough in their first season at the higher level but their performance over the two curtailed seasons was good enough for them to be elevated to step 6. Following geographical considerations, FC Stratford was placed in the Hellenic League Division 1 where they are currently prospering.
Though they have not yet competed in the FA Cup, three seasons have been spent in the FA Vase. Their best run came in 2019 when they beat Chelmsley Town 3-2 before a 2-2 draw against GNP Sports in the 2nd Qualifying Round before they lost 4-3 on penalties. In local cup competitions, FC Stratford won the Midland Combination Challenge Urn in 2011 as they beat Aston on penalties following a 2-2 draw. The club shares the town of Stratford Upon Avon, a population of around 30,000 with Stratford Town. The town is a popular tourist destination owing to its status as the birthplace and gravesite of playwright and poet William Shakespeare and receives approximately 2.7 million visitors a year. Other famous people with links to the town include actor Simon Pegg, TV chef Gordon Ramsay, politician John Profumo, footballer Dion Dublin and actor Daniel Brocklebank who plays Billy Mayhew in Coronation Street. 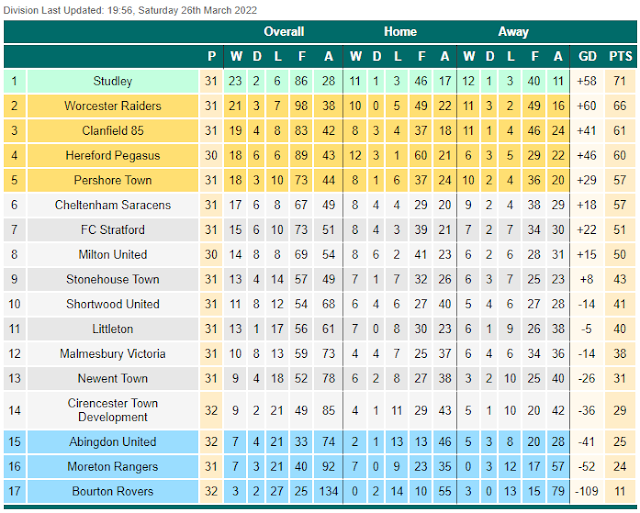 MY VISIT
Although the North West Counties hop had worked out well for me, the Hellenic Hop was a different story. There wasn't much I needed to do in the top two leagues and those that came up were on the days that I was busy. There was Hereford Lads Club on Friday (although strangely not Hereford Pegasus) and a rebuilt ground at Studley on Monday as well as New Dales Vale in the lower tier on Monday. However, I had Wycombe Wanderers commitments on those days. I was left with the crumbs of FC Stratford on Saturday and I was always going to do that with them departing the Home Guard Club soon. Originally, it was my plan to do the game on the train and make a day of it. However, Richard, who I obtained a lift from last week was happy to take me and that was a whole lot less hassle and much cheaper. It would mean a revisit to Littleton but even so, it still worked out cheaper and with the bonus of an extra game. Following my game on Tuesday, there was still a couple of days more work before I got my five day weekend. I'd booked this well in advance, having wanted to go to both the Plymouth home game and AFC Wimbledon away, which would complete the 92. Getting it in early meant that I sneaked in under the radar and got a much-coveted break during the Easter Holidays. I'd not intended to drink on Thursday but I had a few to help me chill. Friday was a similarly boozy day with me having a couple of games. First Wycombe Wanderers earned a glorious 2-0 win over Plymouth Argyle, dominating against a side whose fans have had plenty to say about Wycombe's style of play in the past. It was the first time I'd really enjoyed a Wycombe game since we beat Oxford United on 14th January. It was whilst at that game that Colin spotted that Penn & Tylers Green were at home to Amersham in a local derby. After checking that the kickoff time was correct, I decided to go for it. I needed a bus to help me get there but was rewarded with an excellent game with Penn winning 3-2 in a right battle. I walked home and ended up covering 12 miles, undoing a lot of the damage caused by an unhealthy diet. 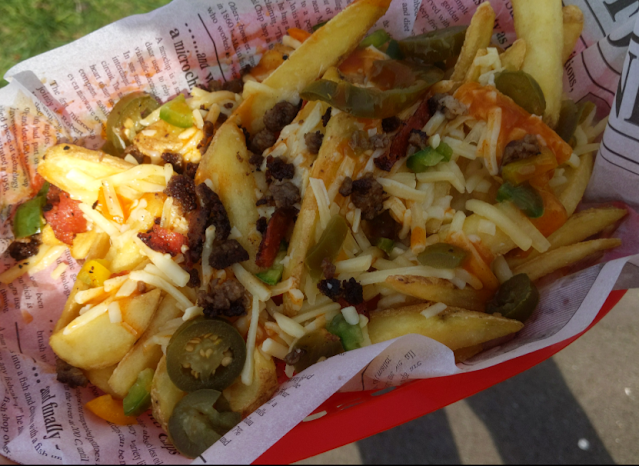 The day of the game came and I had another poor night's sleep. Again though, I felt OK and after a bath and breakfast, I went out for a quick walk. I was back at 10 and spent half an hour at home before leaving at 10.30. Colin had got a lift off another hopper to Wem Town tomorrow but I turned down the chance to join him as I fancied a rest. Maybe if it was local I'd have gone but this Sunday was even more pitiful than a normal one for game choice. I was at our meeting point at 10.50, twenty minutes ahead of the revised 11.10 meeting time. Not wanting any needless contact with the general public, I stayed in the car until 11.05. He was there soon after and we were on our way. We made good progress, even though we had to divert off the M40 for a bit due to an accident. We avoided the delay but it was clogged up going south due to degenerate rubber-neckers, a perverse mentality that I've never understood. We were at the ground by 1.10 and as I needed cash, I walked to the local Spar. It was a pretty nice area but not much in the way of takeaways that were open. I was back at the ground for 1.30 and paid £5 to get in, plus £1 for a programme. I headed to the bar and got some loaded Spicy meat fries for £6 and a pint of Kingston Press for £4.30. It was a really nice bar and I met up with a fair few hoppers in there. The food service was absolutely atrocious, for a simple order of loaded fries, it took 70 minutes. They were nice though, but I wish I hadn't bothered. 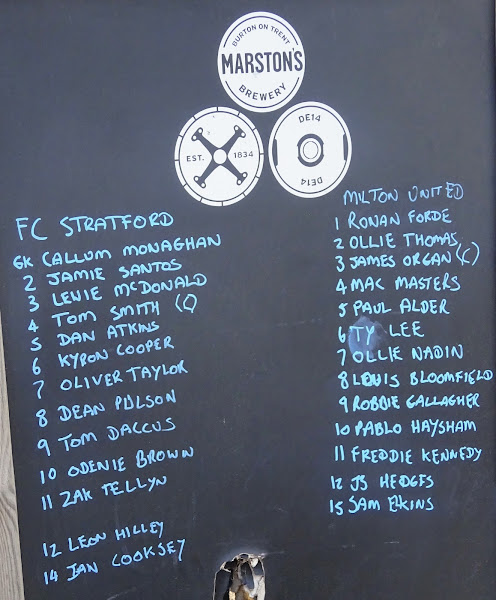 FC Stratford were having an excellent season and sat 7th in the table. They were in mixed form but had won 3-1 at Shortwood in their latest game. They'd also beaten Cirencester Town Development 5-1. They'd drawn 1-1 with Worcester Raiders but lost 2-0 to Cheltenham Saracens, 4-2 at Malmesbury Victoria and 3-0 at Studley. Milton United were a place below in 8th. They were in disappointing form, having lost their last game 4-3 at Newent Town. They'd also lost 4-0 at Stonehouse Town, 2-0 to Pershore Town and 5-1 at Hereford Pegasus. They'd won 1-0 at Cheltenham Saracens and drawn 0-0 with Stonehouse Town. FC Stratford took the lead on 18 minutes, Zak Tellyn's shot squirming through the visiting keepers' grasp. The game took a while to get going and it wouldn't be until twenty minutes from time that Milton United equalised. Mac Masters diagonal shot from the edge of the area might have been deflected home by #4 for an own goal though. A brilliant free-kick by Ollie Thomas gave Milton United the lead on 79 minutes before a well-taken penalty by youngster Gallagher put some daylight between the two sides on 85 minutes. The result was put beyond doubt in the last minute, captain James Organ showing great persistence to poke the ball home from close range following a good run.

FC Stratford 1-3 Milton United with less than ten minutes to go. This decent free kick made it 1-2. pic.twitter.com/sqT1843h0h

Milton United deserved the win although the attendance of 204 was lower than expected, the same for the next game at Littleton where there were 185. It was 25 minutes to the ground, a revisit for me. Whilst there, I got myself a can of Strongbow for £3 and a mini fish and chips for £6. The service was much better here and the wait was only around 10 minutes due to the smaller menu. It was very nice too, not too greasy and freshly cooked. As for the game, Littleton raced into a 3-0 lead and looked home and hosed. However, Shortwood United pulled it back to 3-2 to make it interesting but then Littleton restored the two-goal lead. Any chance of a comeback was lessened by Shortwood having a man sent off for a second booking but they still staged a late rally. There was even a booking after the final whistle for something said to the referee. We left around 7.30 with the journey home beset by another problem on the M40 where someone's car had caught fire. Another diversion was needed and it added a fair bit onto the journey which really seemed to drag. We were back at ASDA at 9.30 with me getting home around 20 minutes later where I had a couple of drinks whilst typing my blog. 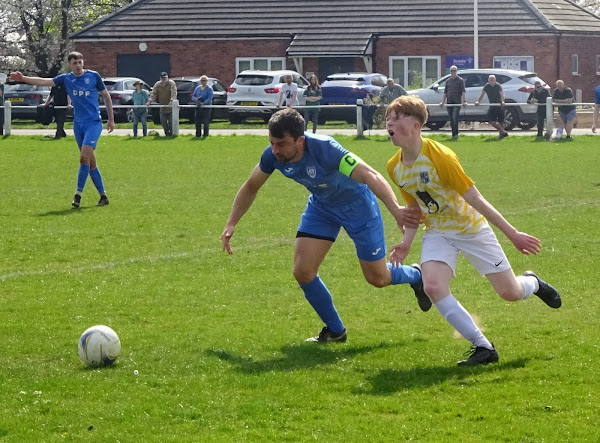 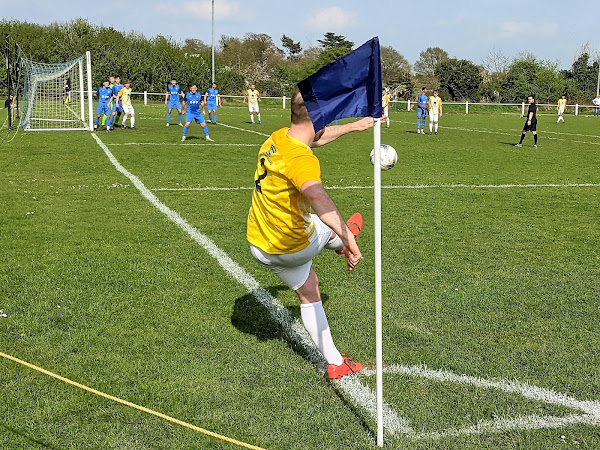 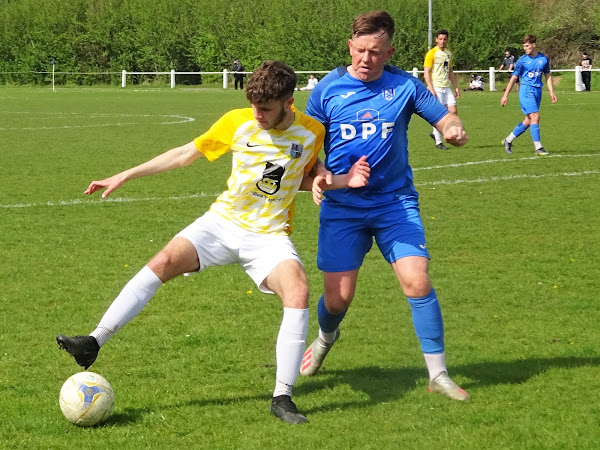 THE GROUND
THE HOME GUARD CLUB is a decent setup for a step 7 side. However, its lack of a seated stand means that they were only given a temporary reprieve at step 6. Both sides are railed whilst the ends just have a rope. The imposing clubhouse offers an interesting backup and a bit of cover. The clubhouse itself is very smart and has Sports TV. There's a reasonable range of drinks, these are slightly more than I'm used to paying, although not outrageous. The food was the same and service was very slow at first although I gather they sped up later after clearing a backlog caused by opening too late. There is a cash machine, Spar and post office nearby. There's plenty of parking plus more on the street and regular buses too. 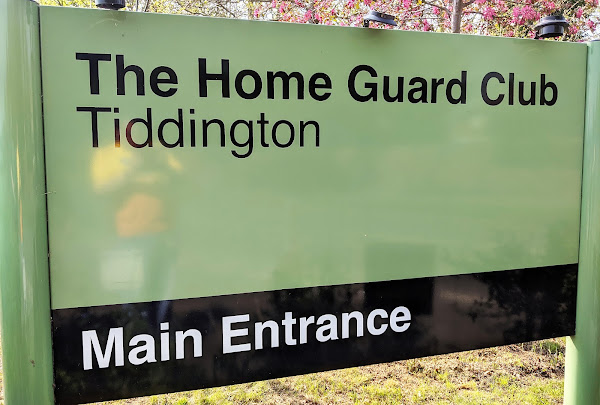 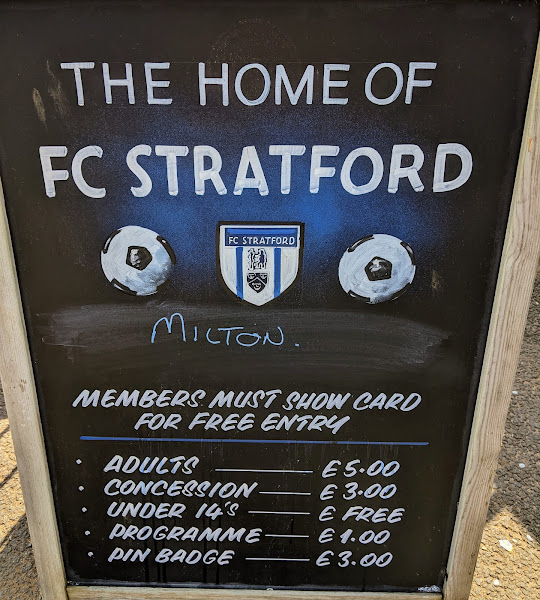 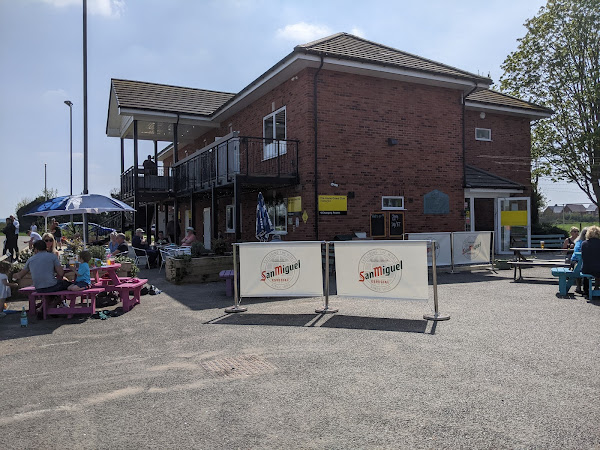 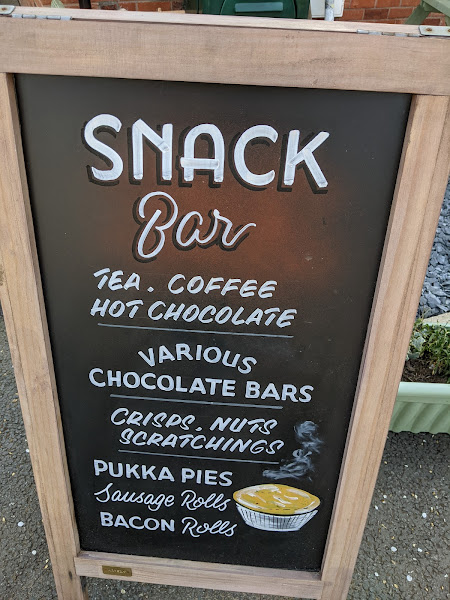 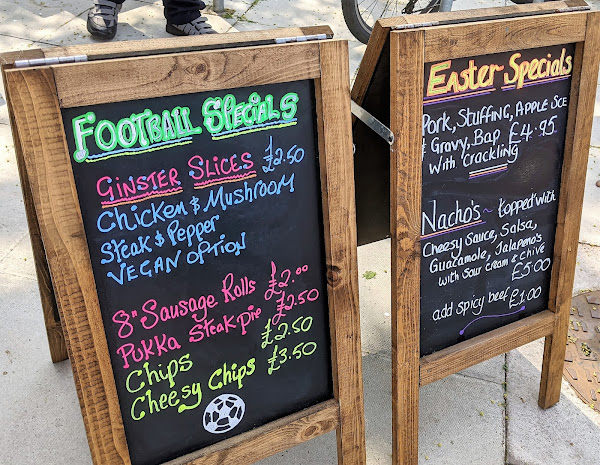 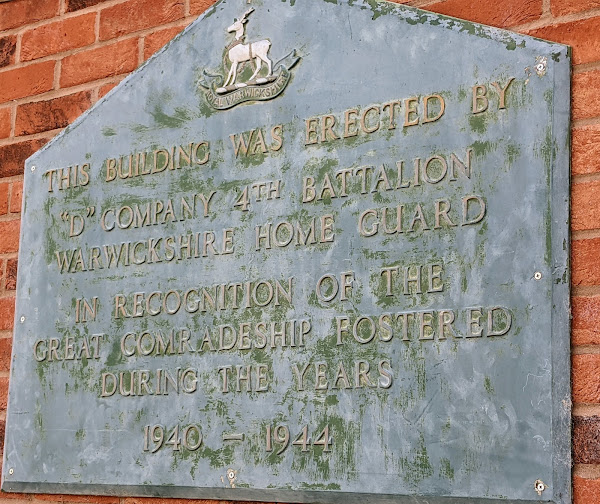 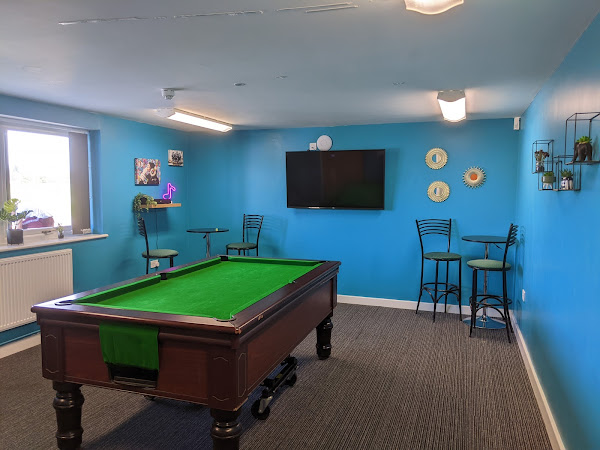 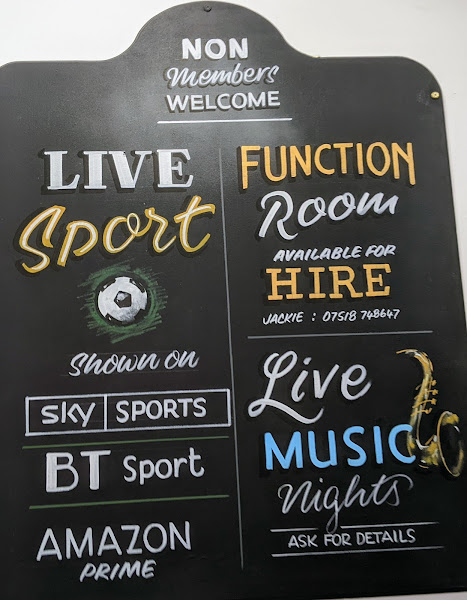 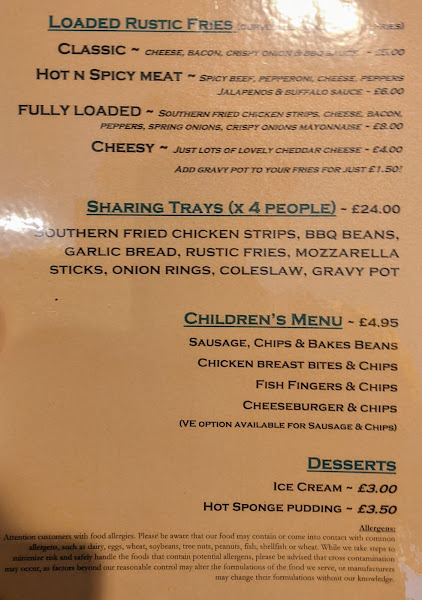 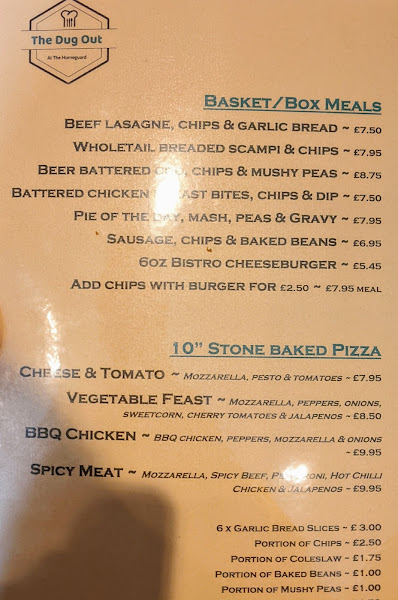 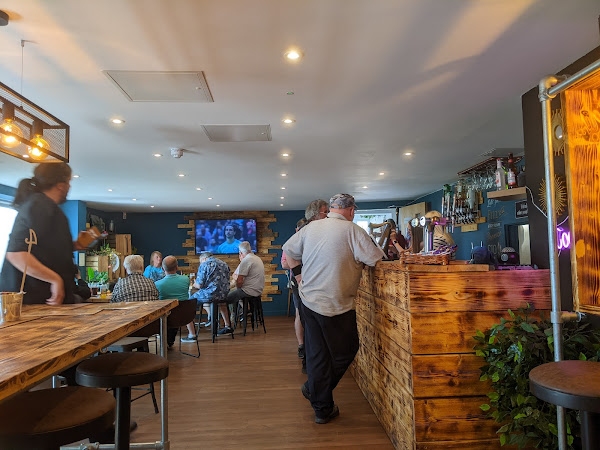 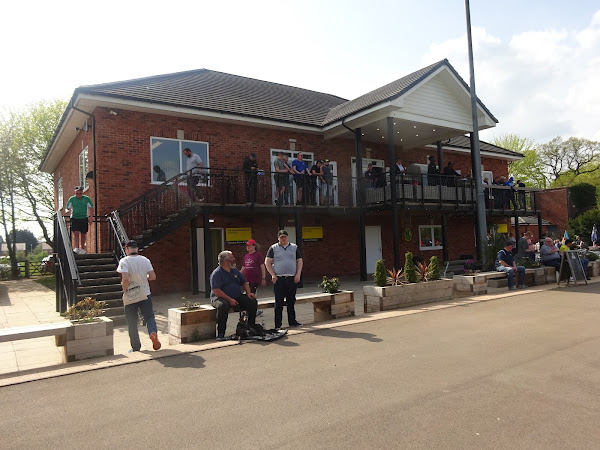 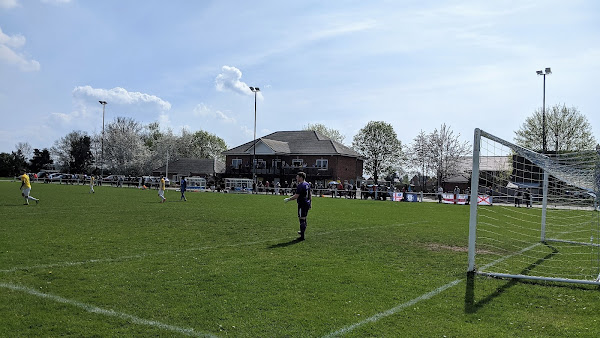 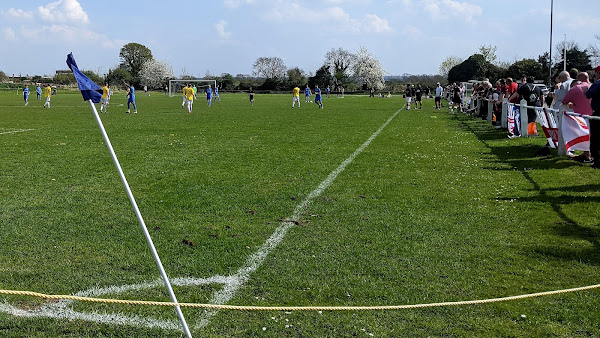 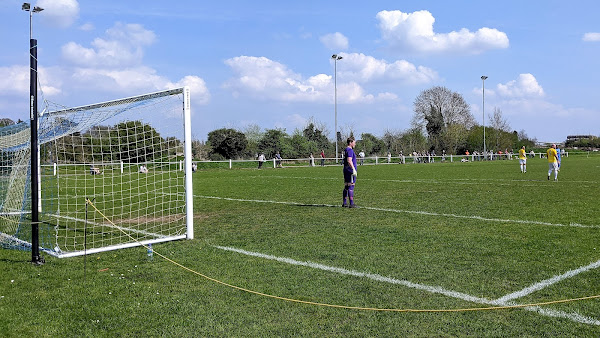 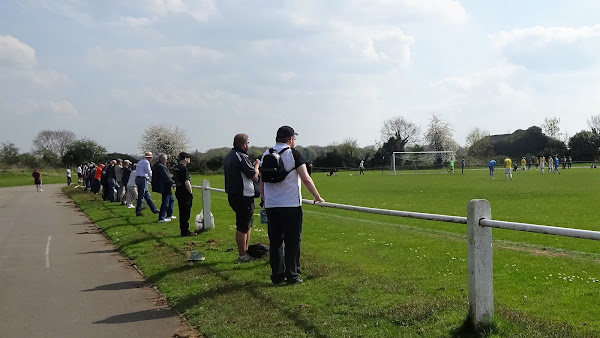 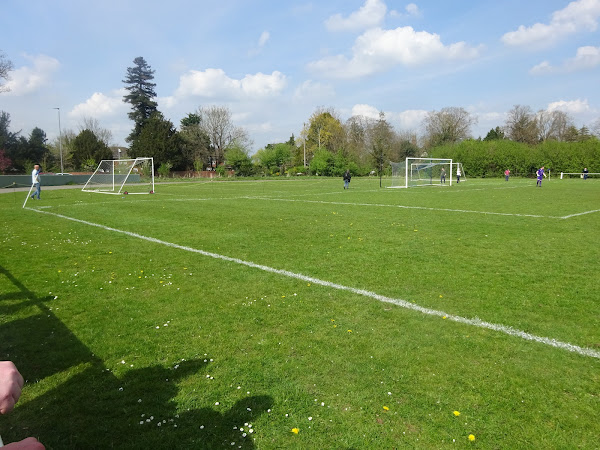