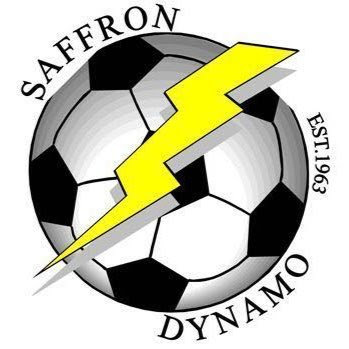 Saffron Dynamo FC
Kings Park
Cambridge Road
Cosby
Leicester
Leicestershire
LE9 1SJ
Official Website
Twitter
Ground Number: 1032
Tuesday 18th January 2022
Saffron Dynamo 0-2 Clifton All Whites
United Counties D1
SAFFRON DYNAMO FC - A BRIEF HISTORY
The club was established in 1963 by a group of friends. They played friendlies at first, using Saffron Recreation Field as their home venue, hence the club's name. They moved on to local leagues before joining the Leicestershire Senior League in 1994. Starting out in Division 1, they would remain here until 2007 when they finished 3rd behind Anstey Town and Sileby Town to win promotion to the Premier Division. They would remain here until 2019 when they finished as runners-up behind Rugby Borough. This won them promotion to the United Counties Division 1. The last two seasons were not completed but Saffron Dynamo were in respectable positions of 12th and 8th when the plug was pulled.
Saffron Dynamo have not yet entered the FA Cup but they have played in the FA Vase. The 2018/19 season saw their best run as they reached the 2nd Round. A 4-0 win against Heath Hayes was their first-ever in the competition. They then drew 3-3 at home to Bottesford Town before triumphing 3-2 in the replay. Their fun came to an end with a 3-0 defeat at local rivals  Leicester Nirvana. In terms of local cups, they won the Leicestershire Senior League Beacon Bitter Trophy in 2000  and 2007. The club is based in Cosby, a village in Lincolnshire with a population of 3,500. In 2009, Sir Garfield Sobers came to the village at a special evening when he talked about his cricket career. The former West Indies captain returned a few days later to join members who had successfully bid to play a round of golf with him. His visits came during a busy spell for Cosby when they hosted the County Championship at the end of June of that year. There is another football team in the village, Cosby United who play a few hundred yards away and compete in the Leicester and District League. 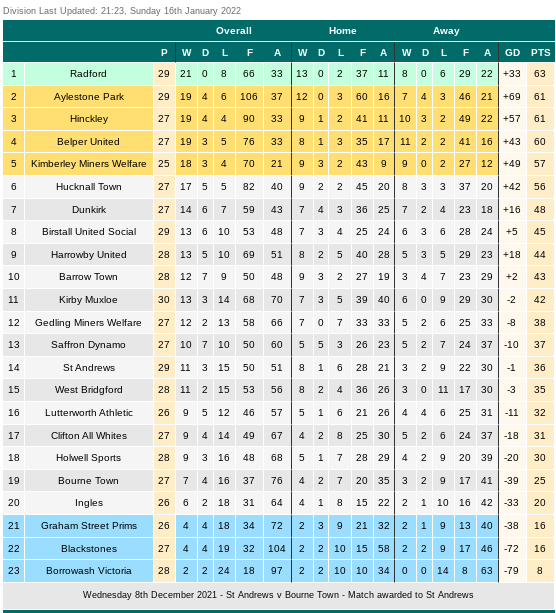 MY VISIT
Saffron Dynamo was one of Anwar and I's nearest unticked grounds, so it was inevitable that we would go there sooner than later. We had stopped for a quick look on the way up to Glapwell last spring and although it was a fairly basic setup, we got a nice welcome from the guy on at the ground and promised we would be back for a game in the future. That was supposed to be on 28th December but typically, after researching the club history and putting plans in place, the game was postponed in the morning. The festive and new year period was a disappointing and fallow period for getting to football games - what with the weather and bank holidays ruining things. It hadn't really picked up in the new year either, with limited choice and plenty of postponements. At least there were a few more choices this week with Devizes Town and a couple in the north midlands as options. Saffron Dynamo was always going to be favourite with it being nearest. When I checked on Sunday, there was no rain forecast and the temperature was set to be around 4 degrees. However, I wasn't going to count my chickens yet as the signs had looked good last time. Just as they had last Tuesday when I was heading for Stone Old Alleynians only for it to be called off, meaning I had to divert to Irlam. 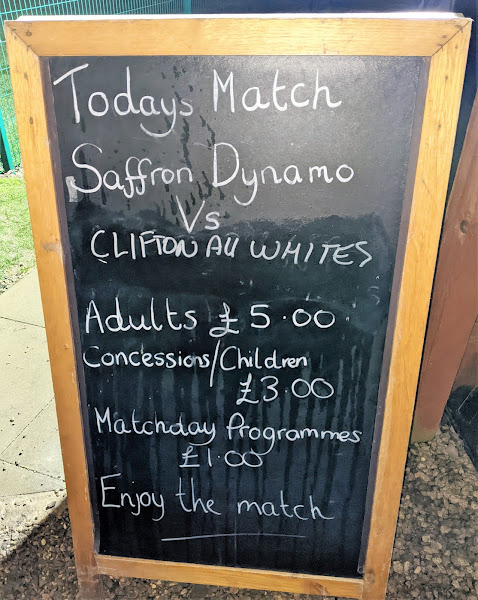 Since that game, I'd been beset by more pitch problems. I'd been planning on a revisit to Holmer Green on Friday night, only for the game to be called off twenty minutes before kickoff due to a frozen pitch. At least I'd got a nice walk in though. Saturday made a mockery of my new year intention to eat and drink healthier with my booziest day of the year so far and plenty of junk food. On the plus side though, it was a great day football-wise with Wycombe Wanderers gaining a comfortable 2-0 win over Oxford United. A good day out was had. I like to have a day out of Wycombe home games, walking to and from the ground and going to the pub. All in all, I spent ten hours out of the house enjoying life, though I'm looking forward to a groundhop next week. Sunday bought about its usual trials and tribulations at work and Monday was another long day, so I was glad of my day off on Tuesday. I kept myself busy, walking to town and back to get some shopping. I also had to send a couple of parcels of stuff that I'd sold on eBay. 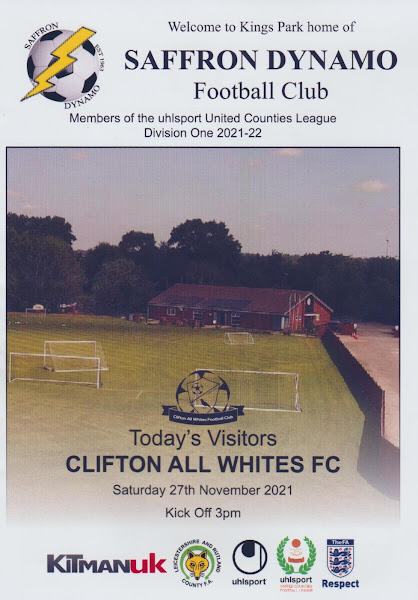 I left a little early as I had another parcel to drop off but had seen nothing to suggest that there would be any issues with the pitch. I picked Anwar up at 4.50 and we were soon on our way. After stopping for petrol in Milton Keynes, we were near the ground by 6.40. I'd planned in a stop at Flames takeaway near the ground. We stayed in the car for five minutes longer to listen to the Wycombe chairman Rob Couhig on Radio Derby about our legal claim against them. Personally, I think it is 100% down to the incompetence of the EFL who failed to apply their own rules and have seen so many clubs have financial issues. I ordered Chicken Quesadilla and fries for £9 and Anwar got some cheesy chips. Mine was all very decent and something different to what I usually have. Though it was a bit messy, especially with eating it in the car and the steering wheel getting in the way. From there we drove to the ground, getting there at 7.30. We paid £5 to get in, plus there was a free programme from the original November fixture. We took shelter from the cold in the bar for five minutes before going out to watch the game. 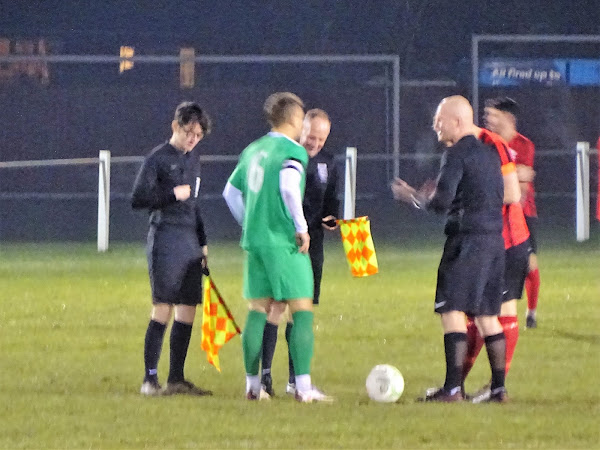 Saffron Dynamo were in mixed form and were sitting 13th in the table. In their last six, they had beaten Dunkirk 2-0 and Barrow Town 2-1, drawn 3-3 with Aylestone Park and lost 6-2 at Gedling Miners Welfare, 3-0 at Blackstone and 3-1 at Belper United. Clifton All Whites were in 17th and despite this, since I'd seen them beat Ingles 2-0 in mid-November, they'd been in reasonable form. They'd won 4-2 at West Bridgford in their latest game and had also won 3-0 at St Andrews. They'd drawn 3-3 against Blackstones and 1-1 against Harrowby United but had lost 2-1 to Dunkirk and 2-1 to Kimberley Miners Welfare. Clifton All Whites started on top and they had the lead after ten minutes. Calrick Dunkley put in a cross from the right and the ball was deflected into the net from a few yards out by a home defender. Three minutes later, Saffron Dynamo came close to equalising when Clifton keeper Beau Watson flapped at a corner but it came to nothing. The visitors could have doubled their lead on 17 minutes, but the corner was narrowly headed wide. They also clipped the bar from close range a minute later. On 25 minutes, the Clifton keeper made a smart double save to prevent an equaliser. On 42 minutes, the lead was doubled, Kieran Cummins with an excellent lob from around 20 yards which caught the home keeper out. Chances died down in the second half but Saffron Dynamo's Khyle Bennett was yellow carded for lashing out after he was the victim of a robust challenge. Clifton had been the better side, but it might have been a different story if the hosts had taken one of their chances earlier on. 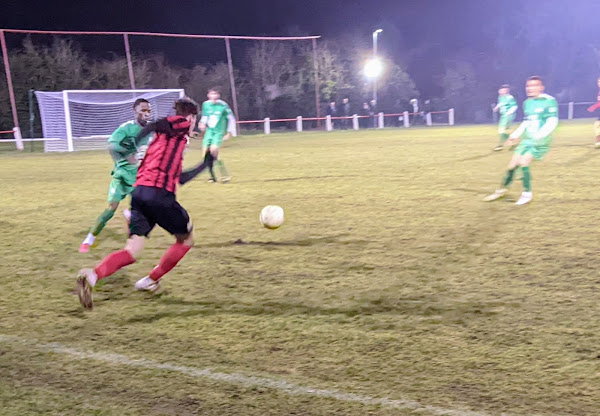 All of this was for nothing though, as much to the bemusement of the 40 in attendance. The referee had a brief word with the visiting bench, although they later claimed on Twitter that he had not entered into any discussion and simply abandoned the match. Both sets of players wanted to carry on apparently, but the referee was having none of it, consulting no one and calling the match off. His decision has to be respected at the end of the day but the pitch did not look frozen, nor did the grass surrounding the pitch feel frozen. The referee had claimed that players were complaining of slipping over, but that was apparently fiction. I've seen matches completed in far worse conditions this season, so the whole thing is a mystery. We left at 9.30 and had to cope with a closure on the M1 for a few junctions but other than that, it was a good journey. I dropped Anwar off just before 11.10 and got home myself at 11.30. I stayed up for around an hour before going to sleep so was pretty sleepy the next morning. Next up for me will be a game on Friday, most probably Downton v Laverstock & Ford but as ever, I expect that weather may play a part in my choice of game. 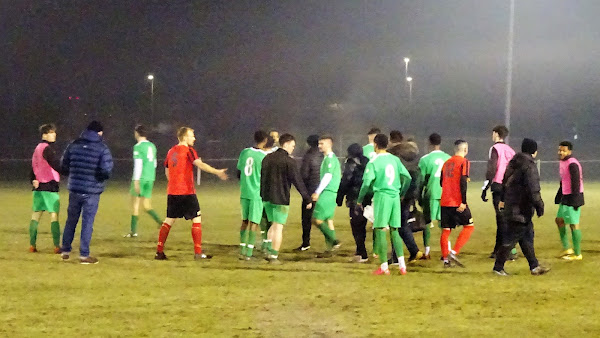 THE GROUND
KINGS PARK is a typical new venue at step 6. Both of the covered areas are of the metal variety and hold around 50 each, one standing, one seated. Only two sides of the ground are accessible to spectators, but the place is well kept. The bar is a few hundred yards from the pitch but has Sports TV and a reasonable range of drinks at good prices. There's also food available. There's also plenty of parking at the ground. Nearby is a decent takeaway called Flames, half a mile from the ground which has its menu on Just Eat. In the opposite direction are more takeaways, including a chippy. 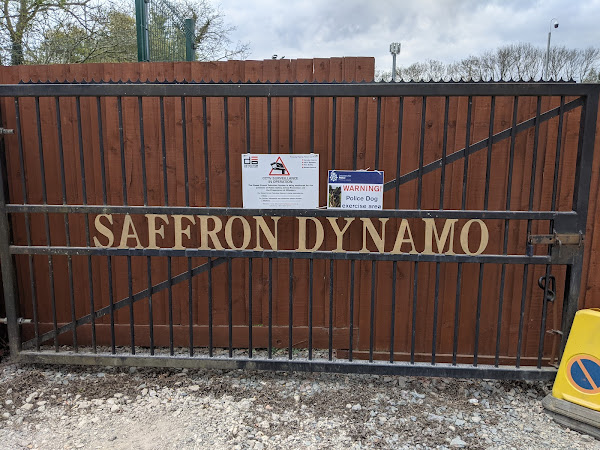 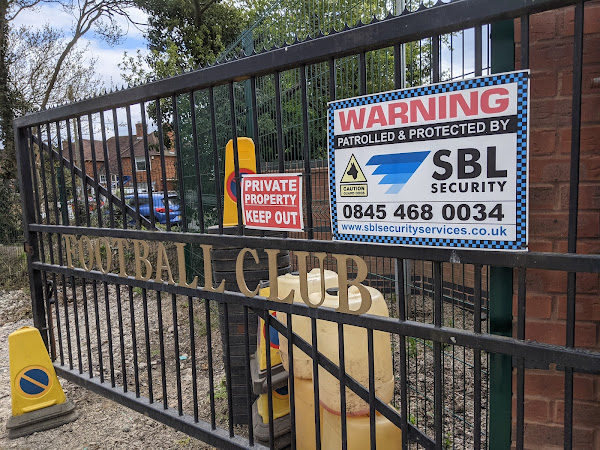 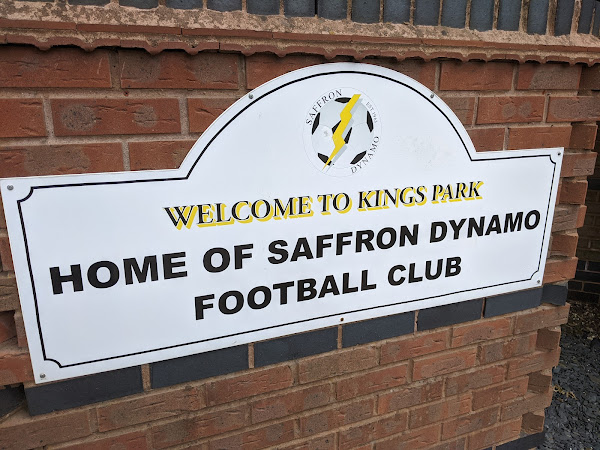 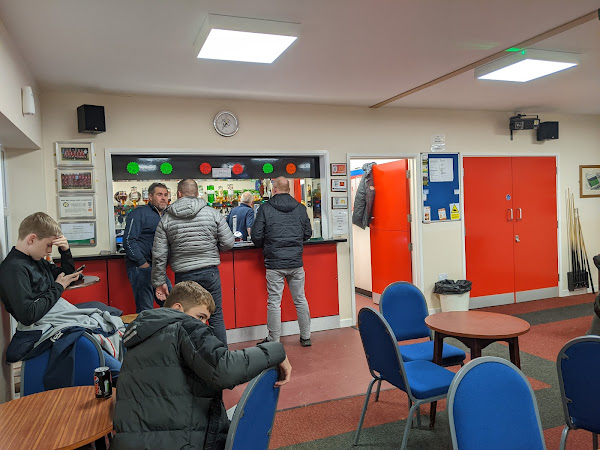 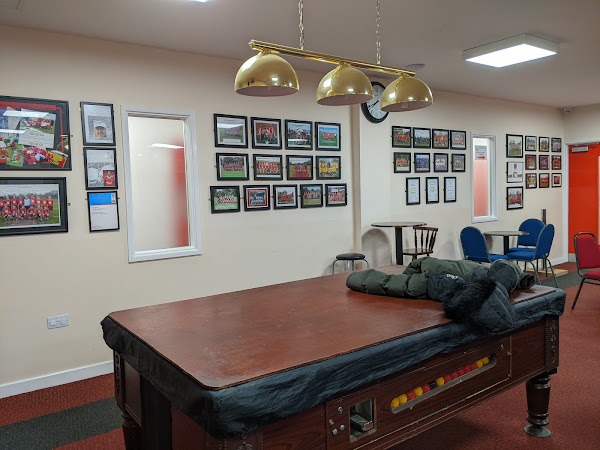 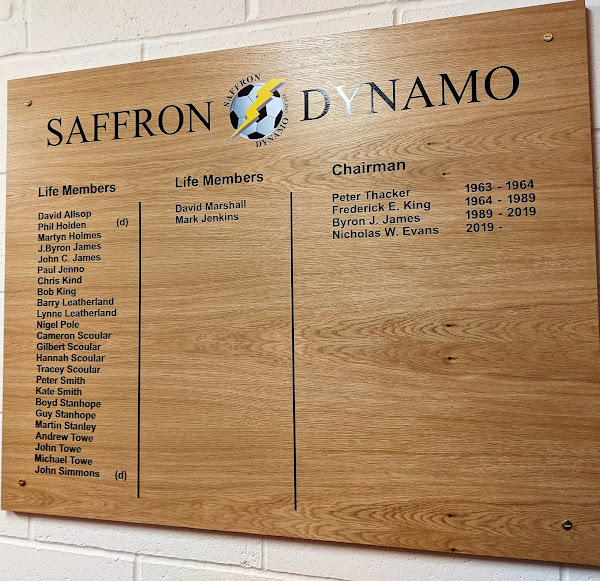 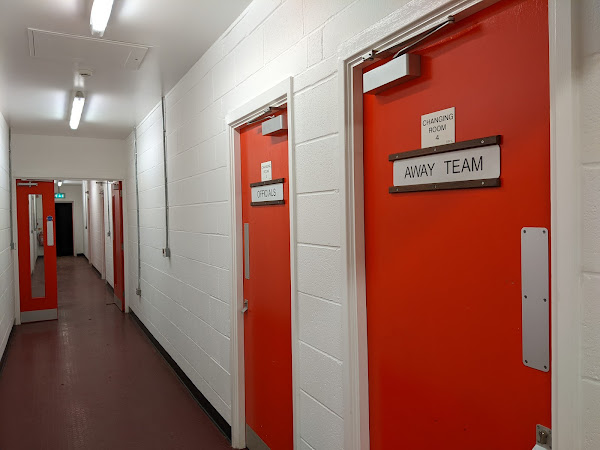 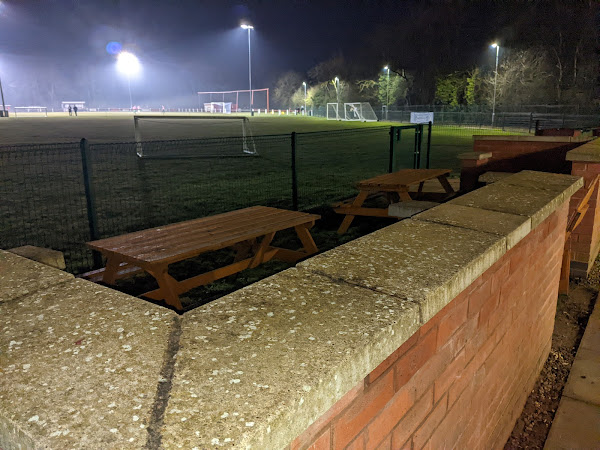 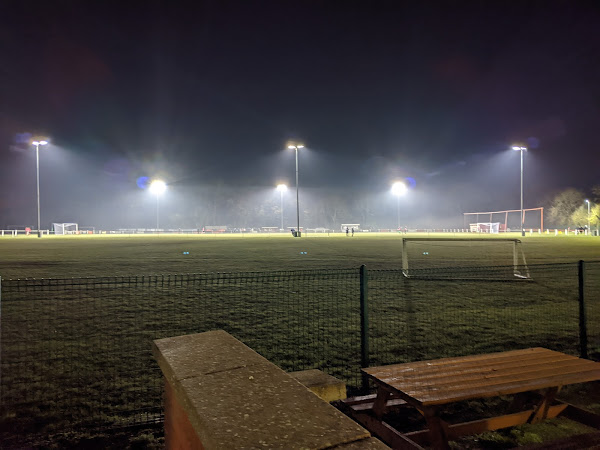 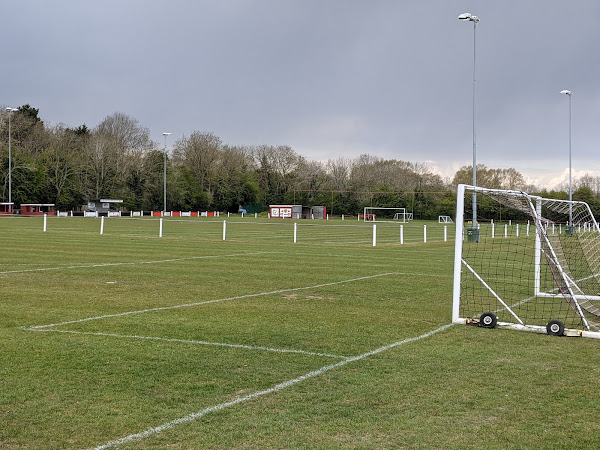 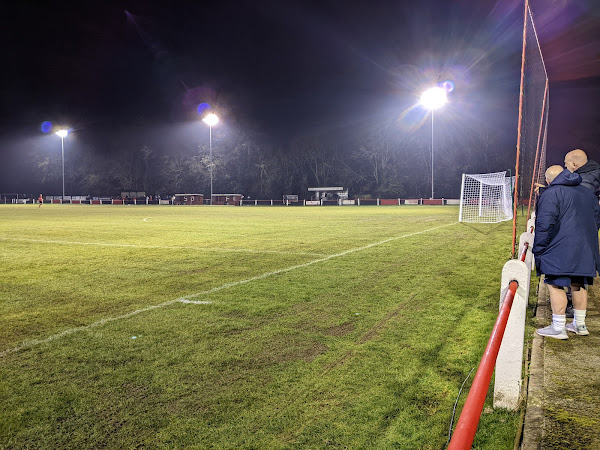 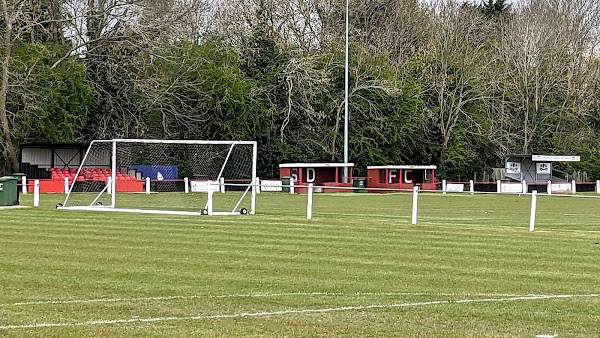 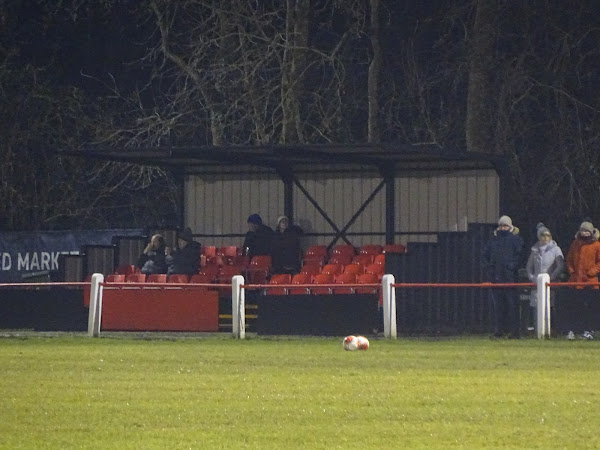 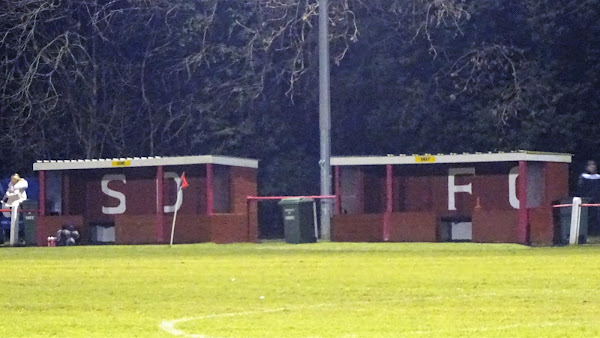 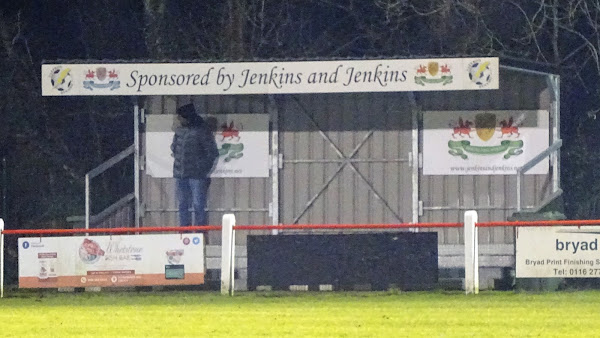 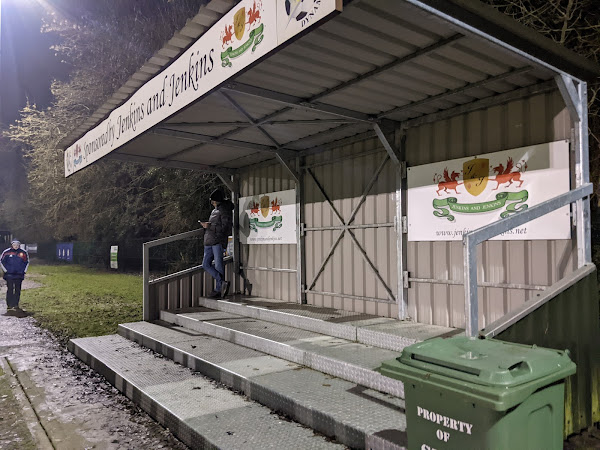 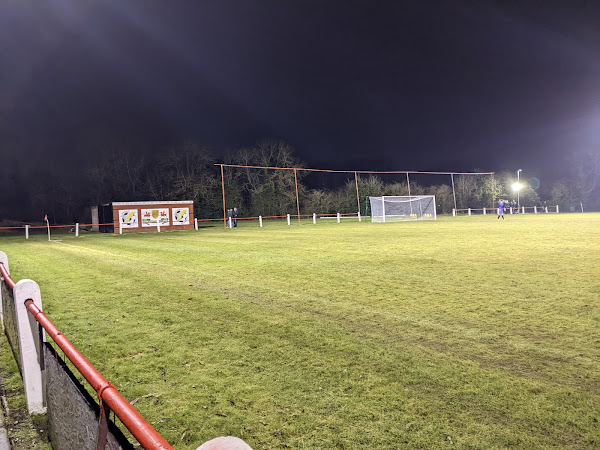 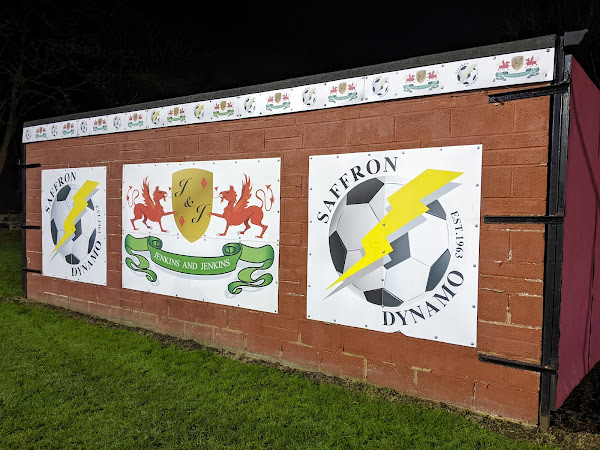 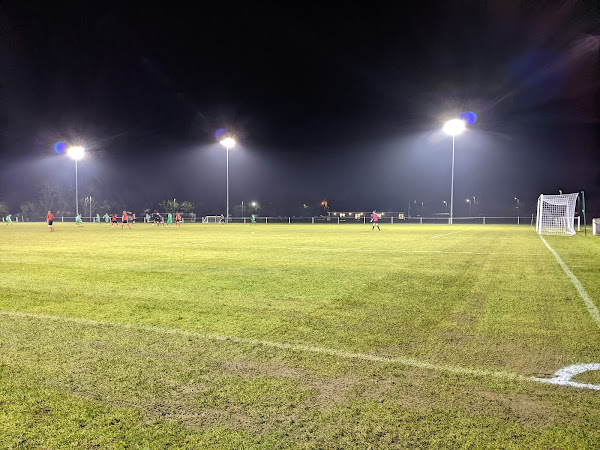 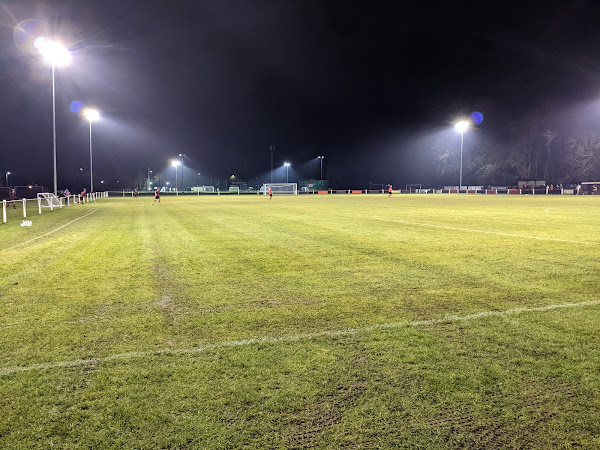