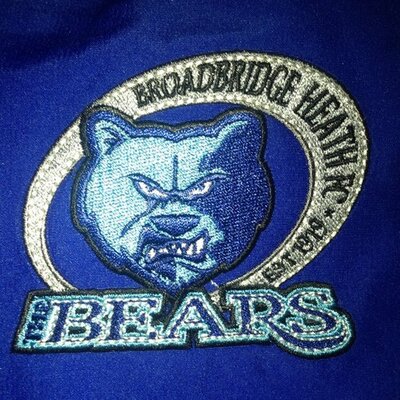 The club was established in 1919 by demobilised soldiers from the First World War. They joined the Horsham & District League upon formation, winning the league and the league cup in their first season. The club would remain here for some time, right up until 1970 when the competition was absorbed into the West Sussex League. Starting in Division 3, Broadbridge Heath won promotion in their second season as well as winning the Charity Cup the season before. They won another promotion to Division 1 in 1976 but two years later left to join the Southern Counties Combination League. In 1983 this was merged into the Sussex County League. Broadbridge Heath started out in Division 3 and remained there until 1988 when a third-place finish behind Ifield and Midway was good enough for promotion. Despite struggling for a lot of their first spell in Division 2, they won promotion after a 3rd place finish behind East Preston & Eastbourne United in 1998. They'd only last the one season in Division 1 with the team winning just 4 games all season and finishing rock-bottom. Aside from a couple of good seasons, Broadbridge Heath continued to struggle and would be relegated back to Division 3 in 2008. a 5th place finish in 2012 was deemed good enough for promotion back to Division 2. This time they would fare a lot better in Division 2 and in 2014 would finish as runners-up to Eastbourne United to seal promotion to the top tier. The club has remained there ever since, though the league has been renamed the Southern Combination. In 2018-19 Broadbridge Heath enjoyed their best-ever finish in their history as they finished 6th in the Premier Division They were 16th last March when the season was abandoned and this time out they sit a place lower at the time of the game.

Broadbridge Heath have a disappointing record in the FA Cup not yet progressed beyond the Preliminary Round. They were due to play Haywards Heath this season but the game was forfeited due to Covid regulations. Their record in the FA Vase is not much better though, in 2017-8, they did reach the 2nd Round. After beating Southwick, AFC Croydon Athletic and Kensington Borough they travelled to the eventual winners Thatcham Town and found themselves on the end of an 8-2 defeat. In local cups, they won the West Sussex League Division 3 Charity Cup in 1971. The village of Broadbridge Heath has a population of around 3,000 and is located a couple of miles from Horsham. 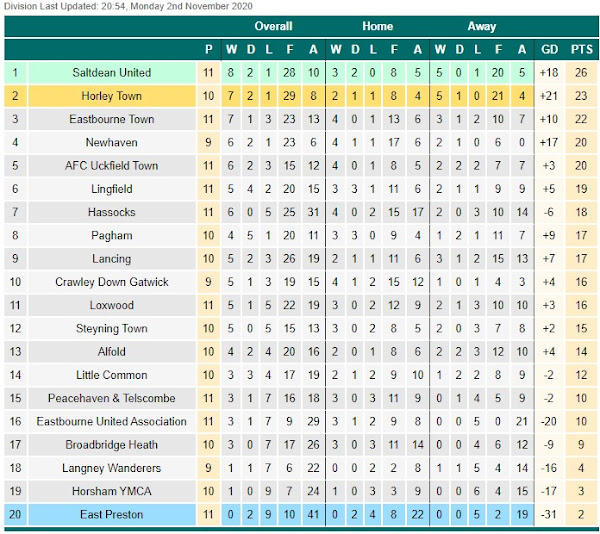 Sadly, a  second national 'lockdown' had been announced on Saturday evening and so, this was all set to be my last game for at least a month. Well, a lockdown of sorts, unlike last time the schools will be open - despite this being where the vast majority of infections occur outside of care and medical situations. The message seemed to be - no restrictions on working (unless you can work from home) but huge implications on your personal freedom. All par for the course with the worst government in my working lifetime and the opposition is as bad, if not worse as they are supposed to offer hope, yet bar Andy Burnham, the Mayor of Manchester, none of them are talking any sense. I was going to enjoy life while it lasted, but sadly I was unable to find a Monday game despite being happy to travel pretty much anywhere as long as it was in the 'medium' Covid tier and a new ground. The options on Tuesday were limited too, but fellow hopper Anwar was keen to come. Games at Wednesfield, Heath Hayes and Shirebrook Town were ruled out due to them being in the 'high' Covid tier - no point taking a risk when you don't need to. That left us with options at Holwell Sports, Stowmarket Town, Cribbs, Chipping Sodbury and Amesbury Town. Anwar chose the first option and that was fine by me, for once there looked to be no issues with the weather but it was going to be a chilly one. I've let my dislike for Sundays known on this blog many times, but this week was one of the worst. News of the lockdown caused panic buying, despite the supermarkets remaining open for the duration. Then there was the usual lack of social distancing and people not wearing masks properly or at all. Add to that, double-figure groups meeting and treating the shop like a social club and parents treating the place like a creche and letting their offspring run amok, scream the place down and get under your feet, it was a day from hell and due to the extra work, I was there for twelve and a half hours. The government must take the bulk of the blame for their handling of this pandemic, but a minority of the public has not helped and Sunday always seems to attract the dregs of society. 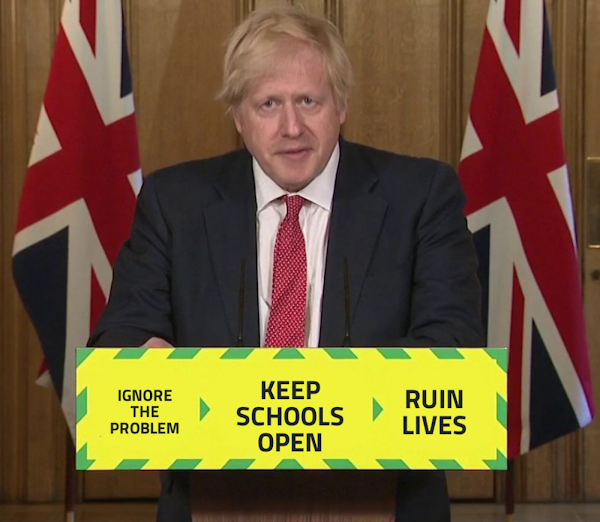 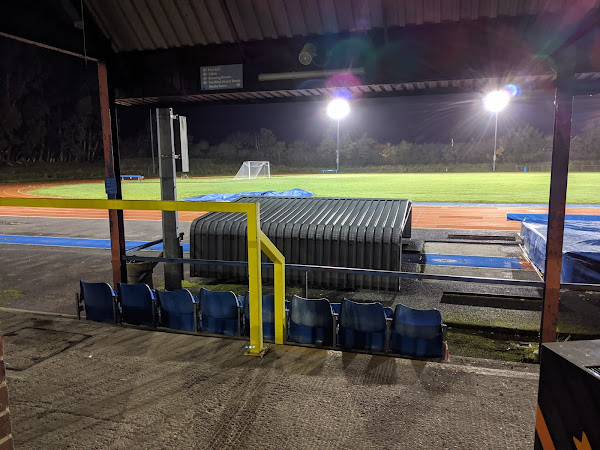 Thankfully, Monday was a far happier day with my shift lasting half as long and me leaving work in a far happier mood with the prospect of a day off the following day. I finalised my plans on Monday afternoon and picked a couple of potential places for dinner as well as researching the club history and team's form. I was really looking forward to my last game in a while, but others would not be so lucky with Covid calling some games off and the Southern League encouraging teams to postpone - madness when it is still legal and there will be a limited time to complete fixtures. The news that everyone was expecting came on Monday afternoon with the ruling that there would be no 'non-elite' football played during the lockdown. I had my usual early night on Monday and woke up at 7.30 on Tuesday to the disappointing news that my game had been called off. It was disappointing and another club history added to the 'draft' section of my blog, but it was the correct decision with a couple of the hosts' clubs players awaiting test results. I needed an alternative and with Anwar opting to go for a revisit at Risborough Rangers, I needed an alternative plan. Lots of options had already fallen but with me choosing to head south, a lot more opened up. I went for the Oakwood v Lancing Sussex Cup tie over options at Chipping Sodbury, Amesbury, Hamble Club, Hythe & Dibden & Broadbridge Heath. Yet another spanner was thrown in the works with a pitch inspection scheduled for the afternoon and with the pitch inspection failed, I decided to head for Broadbridge Heath which had the bonus of a 7.15 kick-off. I walked down town and stocked up with a few bits around lunchtime, before getting a lift home. I did more research in the afternoon, before leaving around 4.30. The journey was a mixed bad, the M25 providing 40-minutes delay, but I've had worse. My Salt & Chilli chip tour continued at Mandarin House in Horsham. Though they were pricey for the portion at £3.70, they were excellent and service was good. From there, it was ten minutes to the ground and I got there at 6.45, stopping for petrol at the local Tesco before parking up. I went past the old stadium which was still intact football-wise but being used for athletics. I was given a friendly welcome, paying £7 for entry and £1 for a programme. 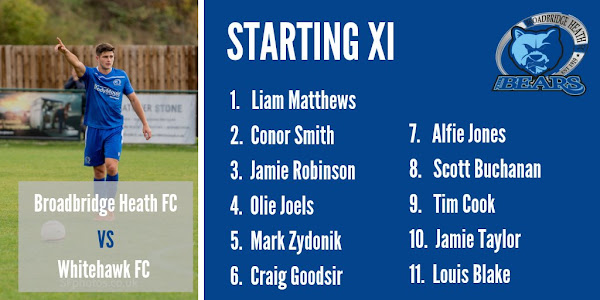 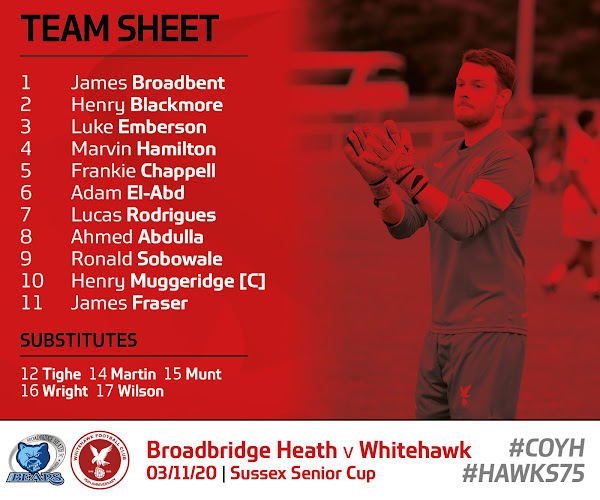 Broadbridge Heath had enjoyed mixed fortunes in their last six games with three victories over Langney Wanderers (2-0), Hassocks (1-0) and AFC Uckfield Town (4-1). They'd suffered three defeats against Lancing (3-4), Saltdean United (1-2) and Alfold (4-5). Whithawk meanwhile sat in 16th in the Isthmian D1 South East and were in disappointing form. They'd beaten Phoenix Sports 2-0 and Barton Rovers 2-1, drawn 1-1 with Faversham but lost 3-0 to Cray Wanderers, 2-1 at Hastings United and 3-1 at Herne Bay. There was a notable name in the visitors line up, former Wycombe defender Adam El-Abd. He looked solid all night, a wise old head but wasn't really troubled. The exchanges were fairly equal early on, but gradually, they asserted their authority. They took the lead on 20 minutes, a header from a corner which was credited by the Whitehawk Twitter as an own goal. They doubled their lead on 40 minutes, James Fraser netting following a goalmouth scramble. They hit the bar too a few minutes later and were well in control at half time. I managed to get both goals on camera too, more by luck than judgement. The hosts started the second half brightly and had a few half-chances which came to nothing. Whitehawk sealed the game with a couple of goals around the hour mark. Firstly Robert Sobowale tapped home a low cross and then Lucas Rodrigues completed a fine run by cutting in from the right and curling a shot home. The rest of the game saw decent spells for both, the visitors looking the most likely to score but there were no further goals in this entertaining game. I left at 9.10, listening to Manchester City's game against Olympiakos on Radio 5 before getting in at 10.25. I was in bed shortly after 11 after finishing this blog. Tomorrow will be my last day of freedom, the plan is a couple of pints in town before coming home for the Birmingham v Wycombe game. That said, this lockdown is bodged, the figures week on week see a 10% reduction in cases, no coincidence that last week was half term, but I'm guessing there is no reasoning with the idiot decision-makers.

The Countryside Stadium is a smart but basic setup, but more than good for the level. There are two covered areas - one standing and one seated, holding around 50 each. The rest of the ground is open. There's a nice bar with Appleshed Cider a real ale and sports TV. The tea bar is quite basic with hot and cold drinks, snacks and Hot Dogs for hot food. There's also a Tesco nearby and plenty of parking, though if you park in Tesco, there's a time limit. The programme is £1 and is excellent value, having some decent content in it. 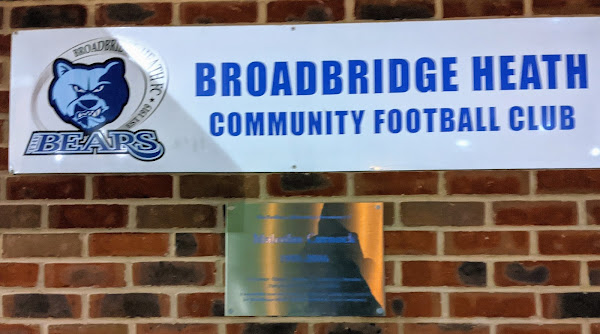 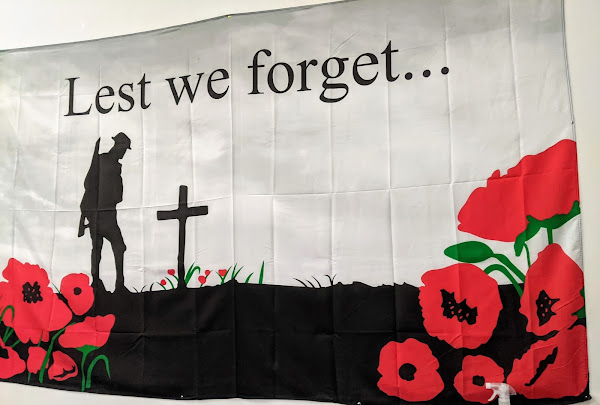 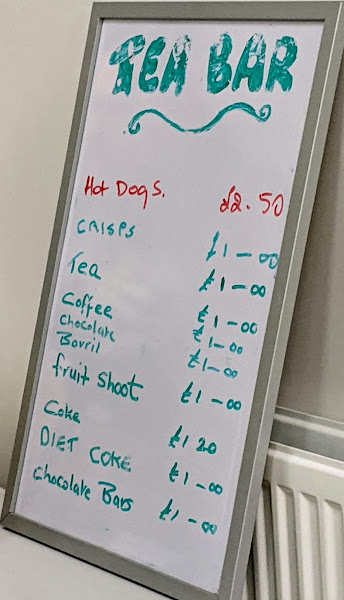 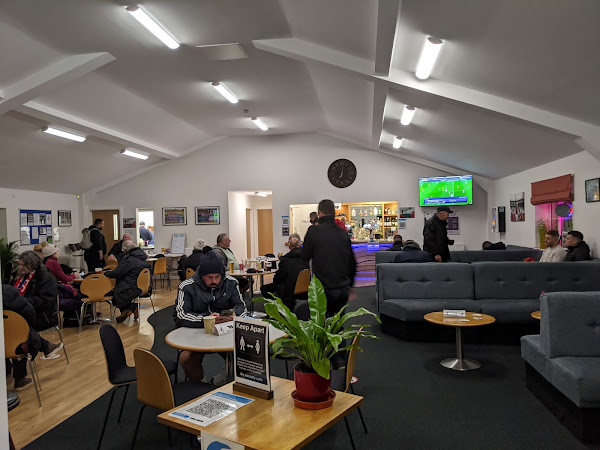 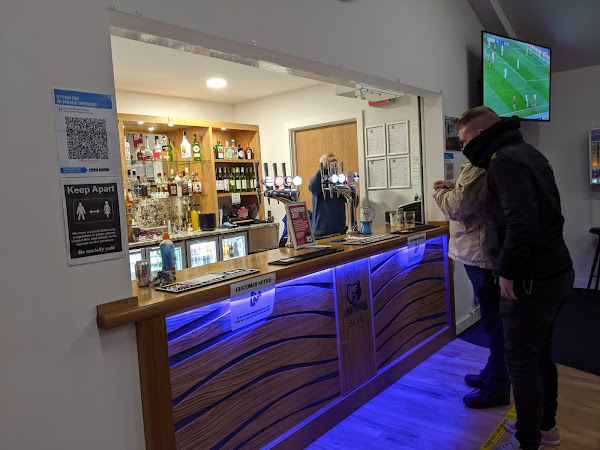 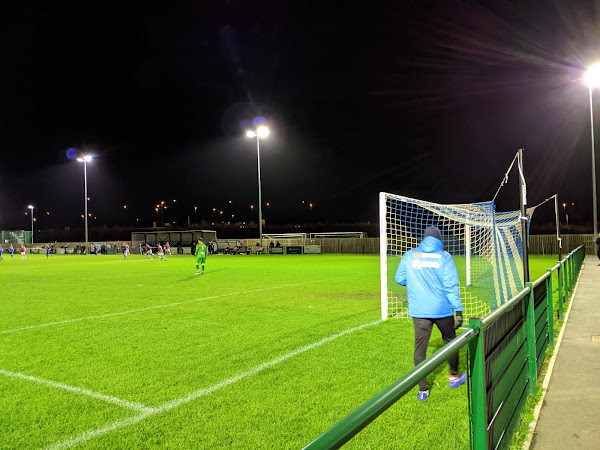 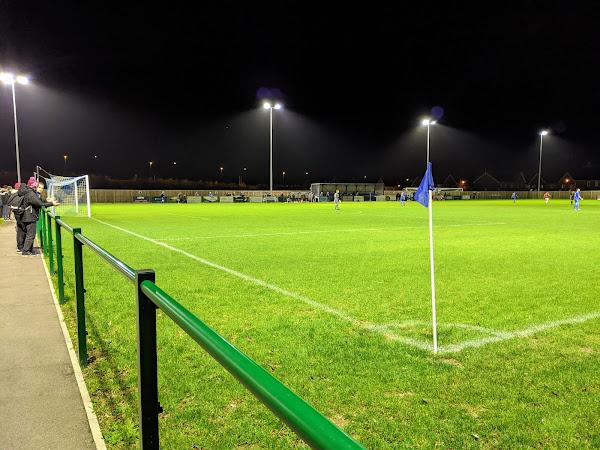 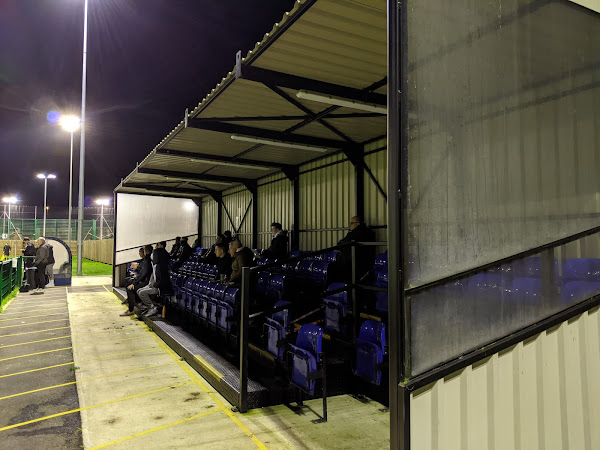 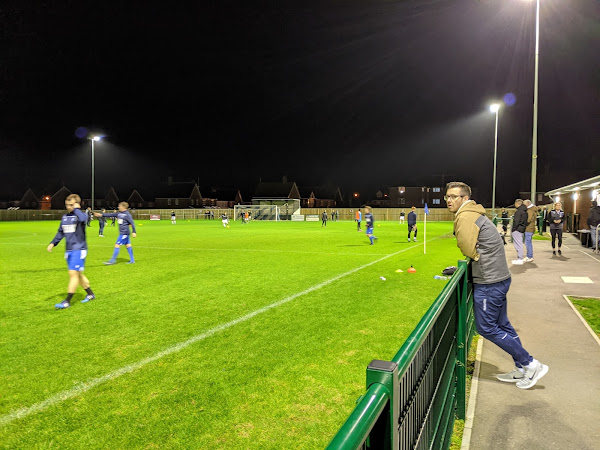 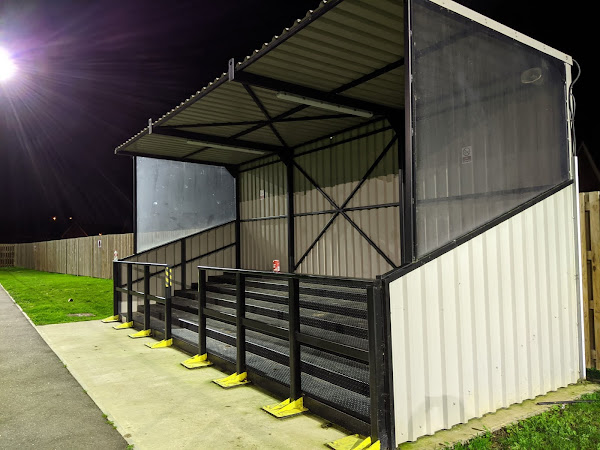 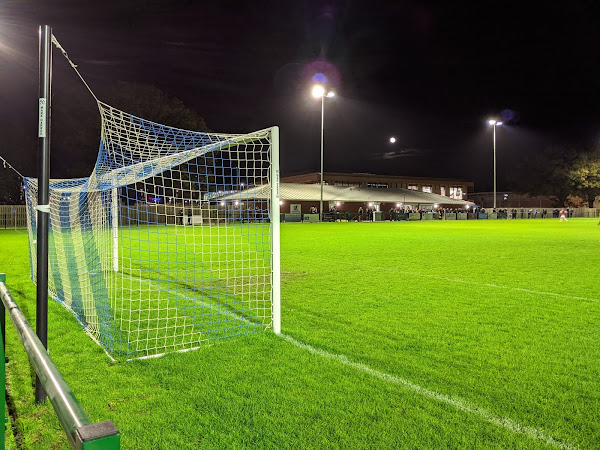 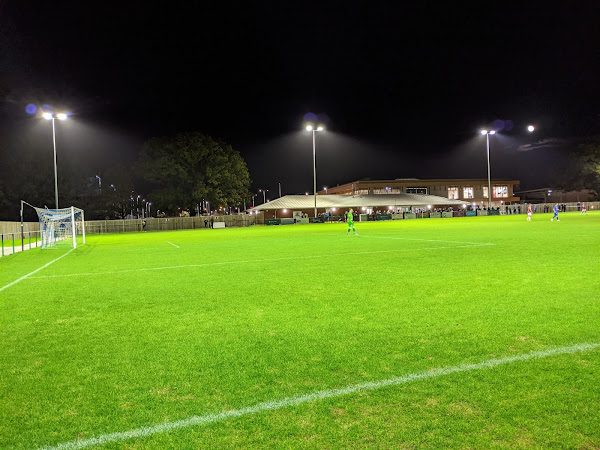 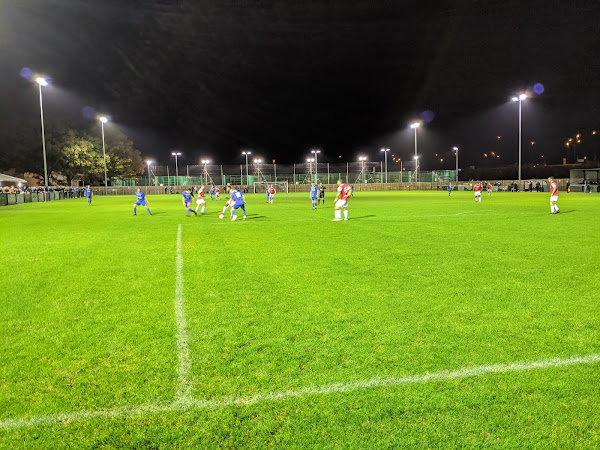 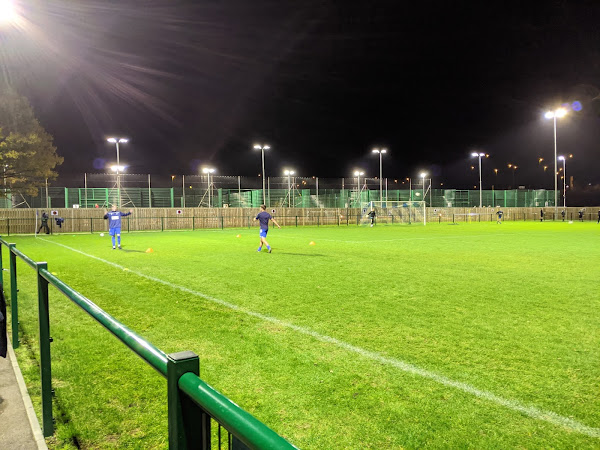 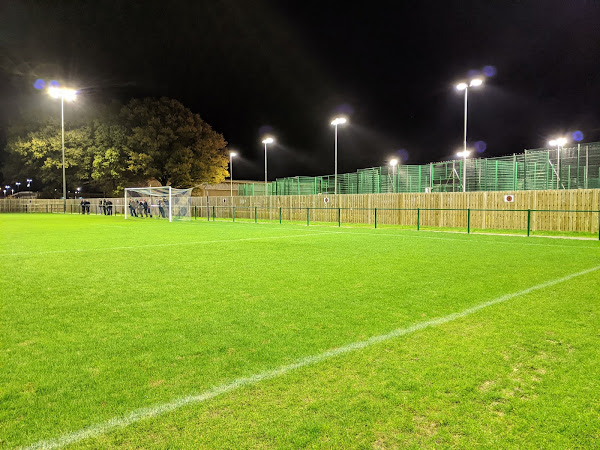