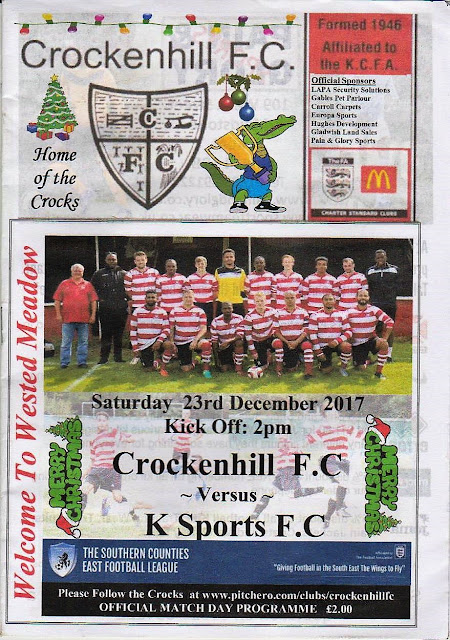 The club was formed in 1946 and was the result of a merger between two local clubs - Crockenhill Youth and Mudhole Dynamo. They spent their early years in the Kent County Amateur League, winning a number of titles and promotions. Spells in the Aetolian League, which became the Greater London League followed, before Crockenhill switched to the Kent League in 1968. They were champions in 1983 - at the time, this league sat at step 5 of the non-league pyramid and remains the best season in the club's history to date. They remained here until 1999 when a lack of floodlights forced them to drop down to the Kent County League. This prompted a lean spell for the club and they dropped as low as Division 1 West, finishing bottom of the step 8 league in 2011. The formation of the Kent Invicta League in that year allowed Crockenhill to make the jump up to step 6, with them being less fussy about floodlights. They've generally struggled since joining, the best finish since joining being 13th out of 16 teams in 2013. They currently sit bottom of the league and it's unclear whether relegation will be enforced as it depends on whether there are any suitable step 7 applicants willing to make the step up.

Crockenhill's lack of floodlights has prevented them entering the FA's competitions in recent times, but they did enter the FA Cup for 5 seasons in the latter half of the 1980's. Their sole win came in 1987 as they travelled to Flackwell Heath and came away 3-0 victors, though they lost 3-1 at Harefield United in the 1st Qualifying Round. Appearances in the FA Vase have been less sporadic and the club has had a couple of notable runs. They've reached the 4th twice - losing 2-0 at home to Molesey in 1975 and 3-1 at Buckingham Town in 1984. Local cup honours include the Kent Senior Trophy in 1981 and the Sevenoaks Charity Cup in 1949. The most famous player to play for the club is former Republic of Ireland international Tony Cascarino who they didn't want a transfer fee for when he signed for Gillingham in 1981. Instead, the Gills donated some tracksuits and training equipment to the club. The small village of Crockenhill has a population of 1,336 and the land the club plays on is owned by a local farmer. According to a 2013 article, the landlord is only willing to allow the club to erect floodlights if they increase their rent from £4,000 to £18,000 a year and is only willing to give them a year to year lease, despite football being played on the site since 1908. 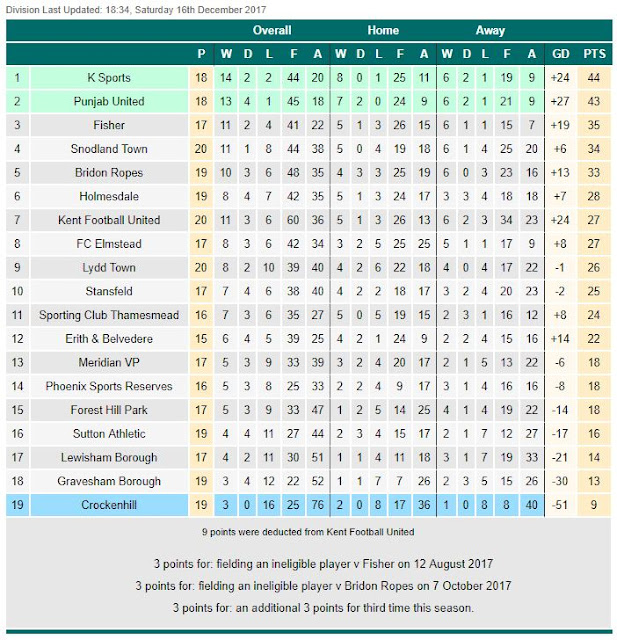 Originally on this day, I'd been hoping to revisit Kidderminster Harriers for their game against Nuneaton Town. It was a ground that I'd been looking to revisit for a number of years and this was one of the few Saturdays that they were at home and that I could make it. However, owing to the unpredictable weather and having to leave at a ridiculous hour to get a cheap train, I decided against it. Instead, it would be another trip to London - something that I fancied with it being near Christmas. New ground options were thin on the ground, however, with all games kicking off at 2PM due to lack of lights. It was something that I'd have to put up with though, even if it meant a truncated pre-match, thanks to the ground being right on the outskirts of the TFL network. At least I'd be able to go to Borough Market beforehand and have a couple of pints beforehand. My research told me the pubs were very poor in Swanley, where I'd be getting the train to, not so much as a Wetherspoons for a pre-match meal. There were takeaways, but the choice was limited and they would mean a small detour before a half hour walk to Crockenhill. 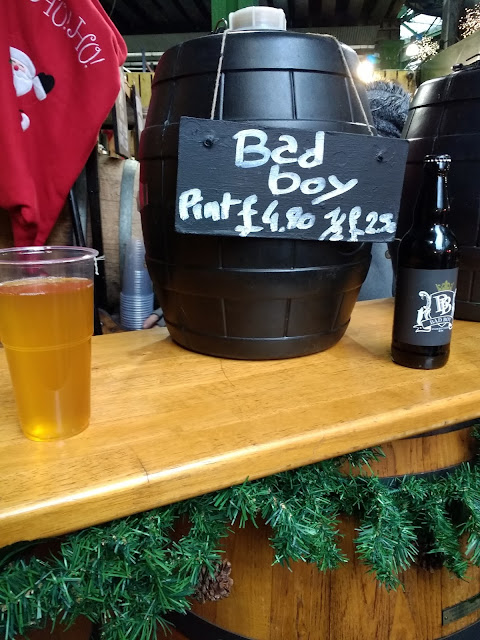 On the day of the game, I woke fairly early, just before 7. It had been a late one the night before and I’d not got to bed until around 2. Even though I’d had less than 5 hours sleep, I felt fine. After a chicken burger for breakfast, I watched last night’s Coronation Street and a few other things. I then got freshened up and dressed, before leaving at 9.15. After parking up, I got to the station in the nick of time, buying a Daily Star before getting the 9.39 Chiltern Railways train. After changes at Harrow on the Hill and Finchley Road, I got to London Bridge around 10.45. It was a short walk to the cider stall at Borough Market where I had 3 new ciders. I left at 11.40 and after various changes found myself at Victoria for the final leg of my journey. It was annoying to have a 35-minute wait for my train, so I got myself a chicken burger and chips for under £3 to pass the time. I’d have preferred something fancy at the market, but the times didn’t work out for me. I finally got the 12.37 to Ramsgate, which got to Swanley just after 1.30 but decided not to let me out, closing the doors on me before I could get out. The Uber from Farningham Road cancelled on me, so I had to get the train back and hope for the best. This involved on travelling on a backwater service, so I had another half hour wait for the train. Luckily I arrived back at Swanley just in time, and apart from having to pay £6 for a taxi to the ground, the damage was minimal. 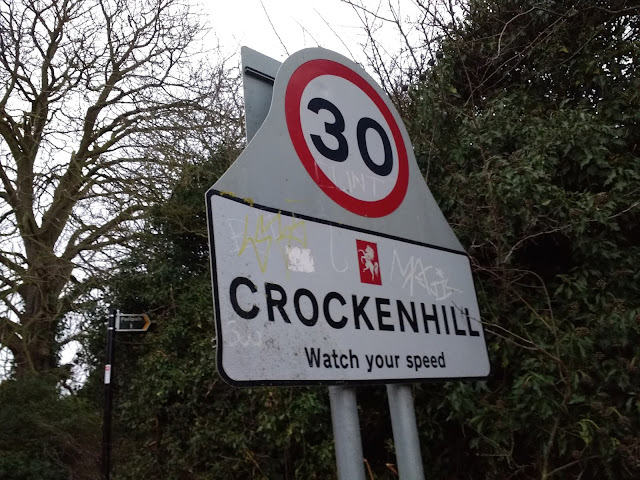 The hosts had a tough task ahead of them, sitting bottom of the table and with just three league wins and no draws all season. They came fresh off the back of a 4-0 defeat to fellow strugglers Lewisham Borough and had lost 9-1 at Kent Football United just a few games ago. They did have an exciting home game last time out as they lost 4-3 to mid-table FC Elmstead. Their last victory had come at the start of November with a 3-1 win over 5th placed Bridon Ropes which completed the double over the Charlton based side, as they won 2-1 there in late August. The other win was a 3-1 victory over Lewisham Borough the previous week. K Sports would provide a stiff challenge, sitting a point clear at the top of the league and fresh off the back of a 1-0 win over Holmesdale, one of 3 victories in their last 5 games. Previous meetings between the sides included a 6-1 victory for K Sports in the League Cup in October and although the corresponding fixture last season had seen a 3-3 draw, K Sports had won the return 6-3 on their own patch. 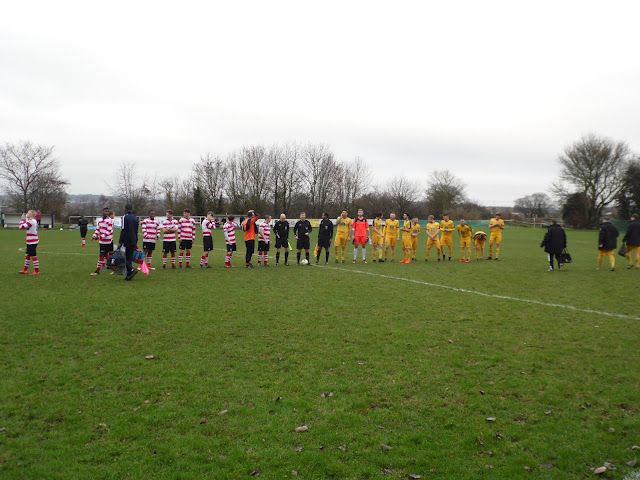 I got to the ground at 1.50, paying £6 to get in. There was no programme yet, owing to an issue with the printer. Apparently, the editor had gone home to print them. The programmes eventually arrived 20 minutes into the second half, I was happy to pay a quid for a copy. I was hoping for a performance of note from Crockenhill but was left disappointed. K Sports were ahead within 5 minutes when Matt Gething fired home a low shot from just inside the area. Caine Smith added a second for the visitors on 13 minutes when a looping cross was headed in. It was 3-0 on 20 minutes, Gething getting his second of the game as he poked home a close-range effort following hesitancy in the home defence. With the visitors firmly in control, there was little chance of the 20 football fans seeing a second-half comeback, instead, it got much worse. A looping shot from Smith made it 4-0 after 48 minutes before the home keeper made a cracking double save to keep the score at four. It was a brief respite though, as, from the corner, Gething completed his hat-trick with a header on 58 minutes. Another header from a cross made it 6-0 three minutes later, this time it was Smith completing his hat-trick. More poor defending saw Smith poke home his 4th on 81 minutes. The scoring was finally complete minutes later and they saved the best until last. Richard Butler lobbed home from distance to make it 8-0 and a complete rout for the visitors. I'd expected a K Sports victory, but not by this margin. Crockenhill offered little, save for a couple of chances on the break, a real shame for a decent club. 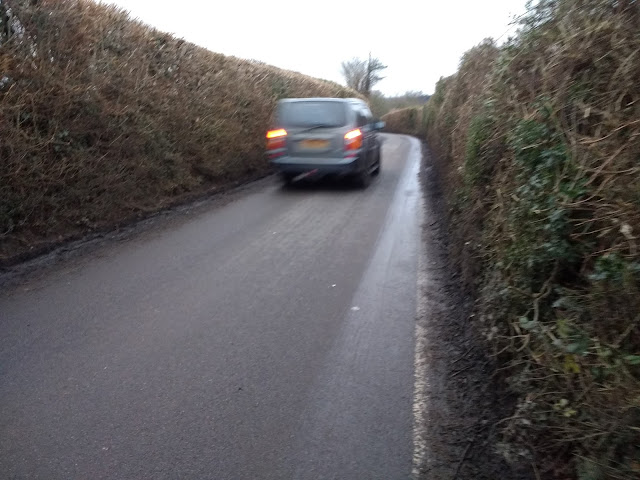 It was a comprehensive away win and could have easily been 2 or 3 times as bad for the hapless hosts. After the game, I walked the 2 miles back to Swanley. The start wasn’t great, down a narrow road with no pavement and some cars being too close for comfort. Eventually, I got back to town around 4.30. As I was hungry, I went in search of food, getting some chicken, Irn Bru and some crisps from Asda. It was still a fair walk to the station and so it wasn’t until just after 5 that I got there. Luckily, my train was there waiting for me, so I got straight on that and went back to Waterloo. It took ages for the train to make the last stop, but at least I had the whole carriage to myself. Whereas my first train was deserted, once I got on the underground it was very busy. I got the Jubilee line to Wembley Park, changing at Harrow On The Hill to try and get back quicker. It turned out to be worthwhile, little more than 5 minutes later, I was heading for Amersham. I got back to the station, walking back to my car and driving home. I got back at 7.30 and watched the Leicester City v Manchester United game on TV, as well as Match Of The Day later on. It was nice for once, not having to worry about being up on Sunday, as I had a rare Sunday off for Christmas. 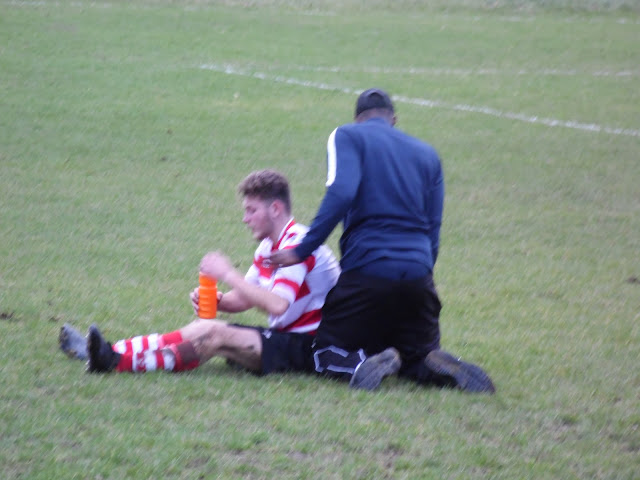 WESTED MEADOW is a groundhoppers favourite and rightly so as it’s delightfully ramshackle. There’s the main stand that holds around 150 at a push, plus a couple of covered areas holding around the same again.  There’s a basic tea bar, plus a great clubhouse. Though the drinks range is limited, the walls are plastered with newspaper cuttings related to the club. There’s not much around the ground, a local shop and a pub, as well as an Indian Takeaway in the evening. The nearest place for a larger range of facilities is Swanley, 2 miles away, although it is on a bus route.

1: Ground facilities & condition (for the level)
Has everything that’s needed for this level, bar lights. Delightfully ramshackle (7)

2: Area around the ground (parking, food/drink, public transport)
Out in the sticks, village is limited but pleasant (4)

4: Value for money
Average for the level (6)

6: Programme
Decent effort, with a festive touch. Extra point for the effort from the editor to get it out. (8) 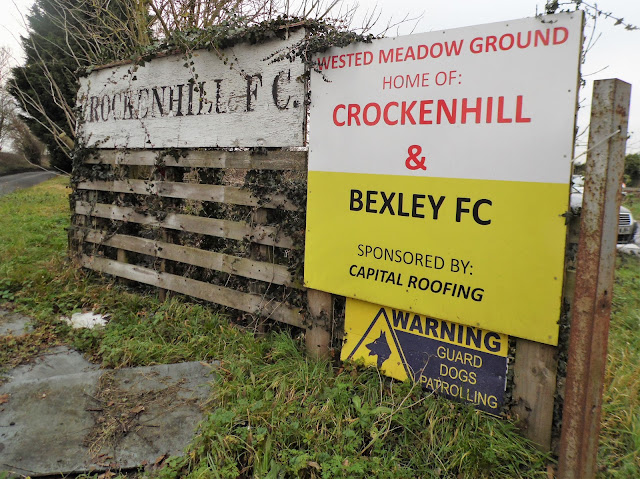 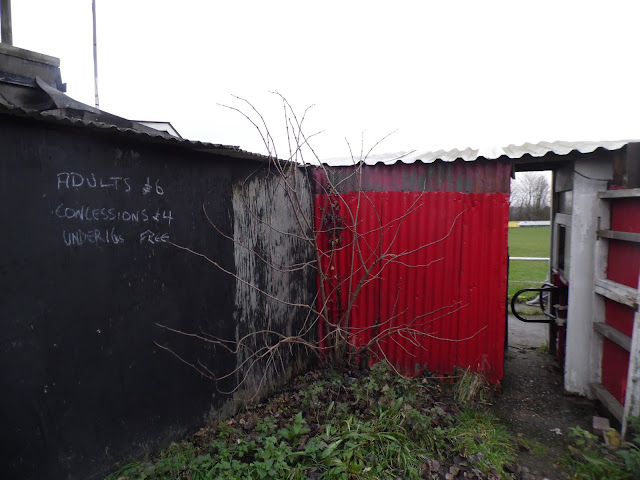 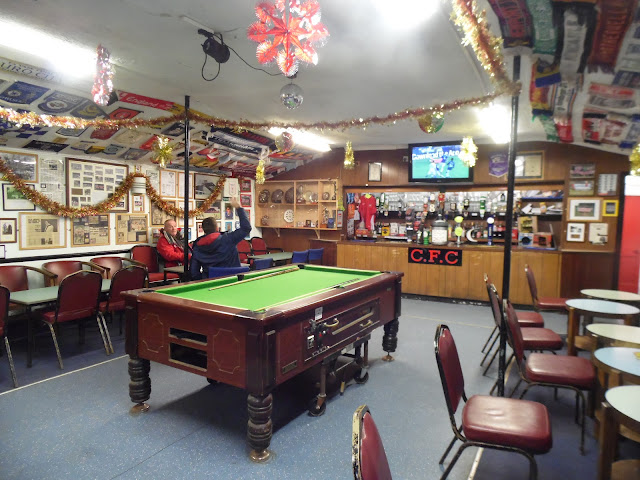 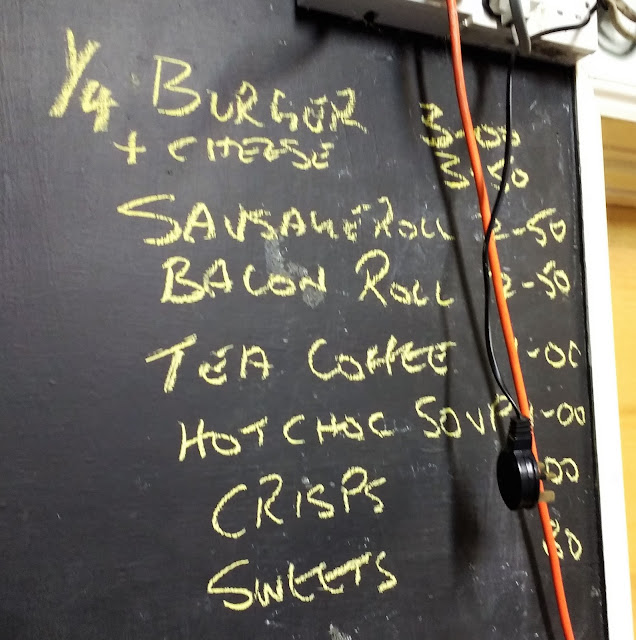 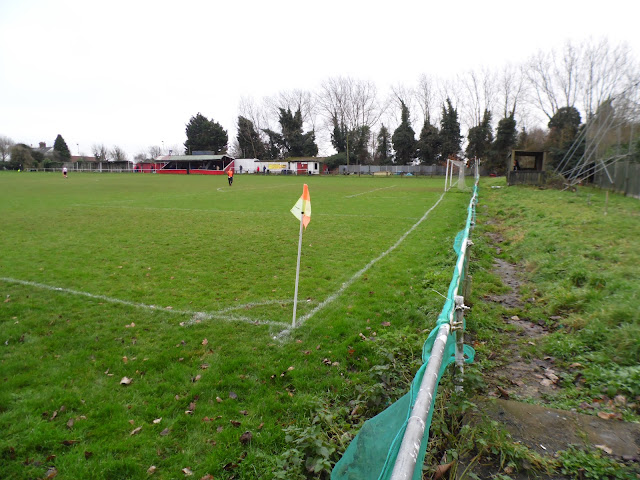 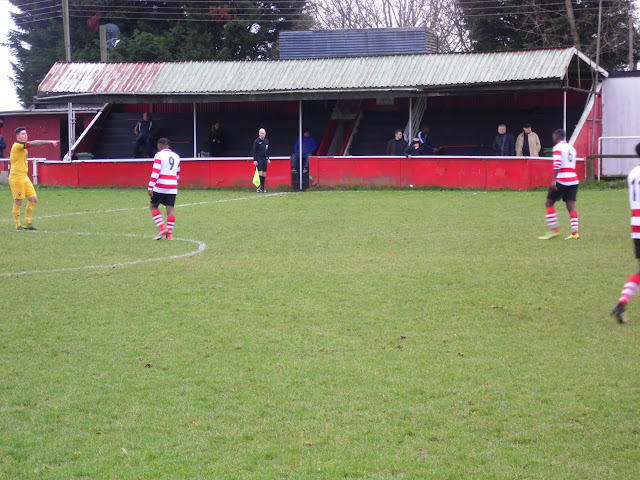 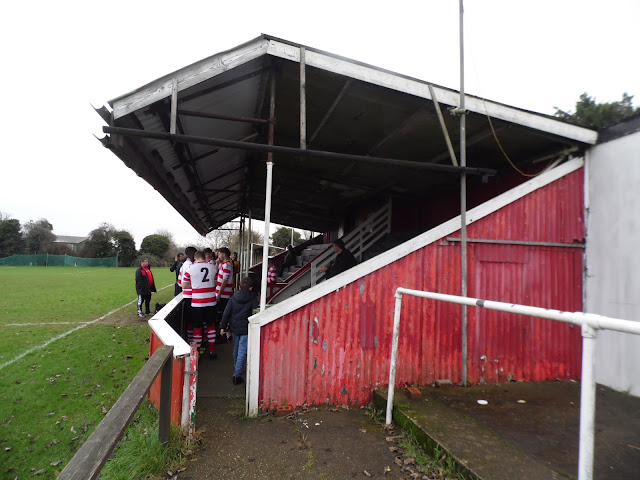 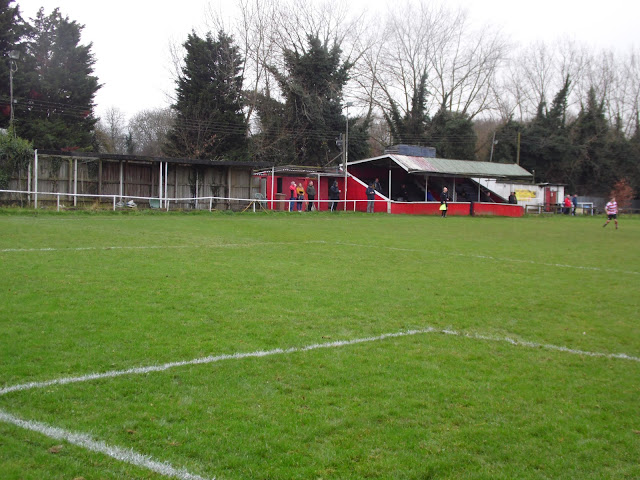 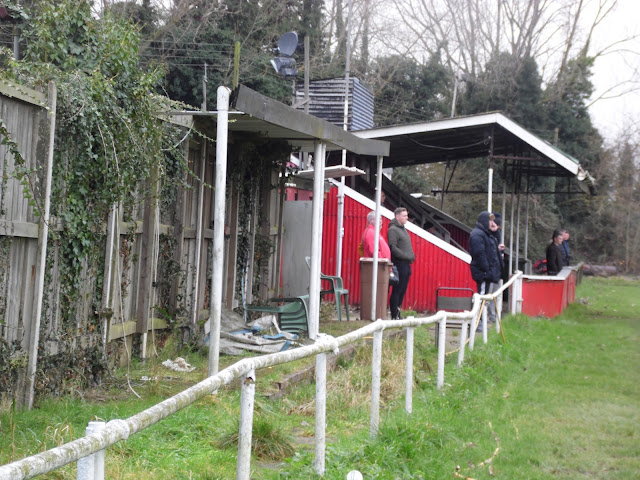 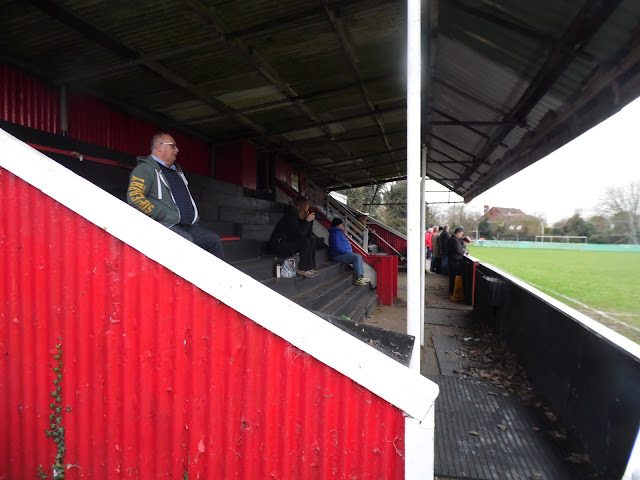 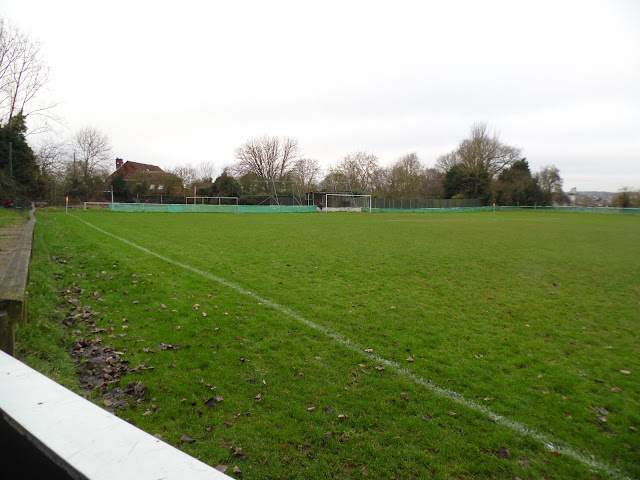 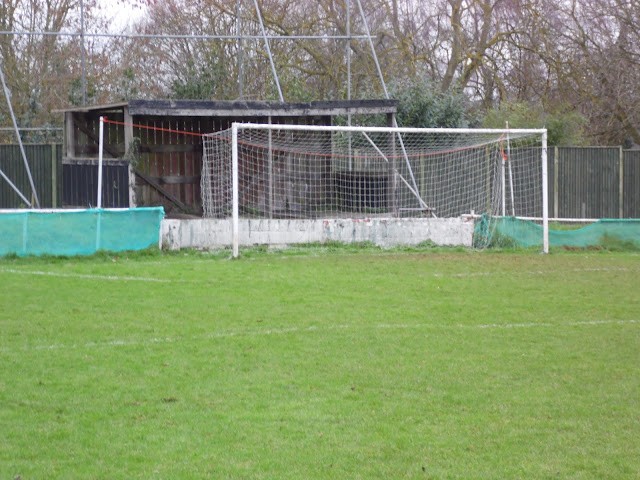 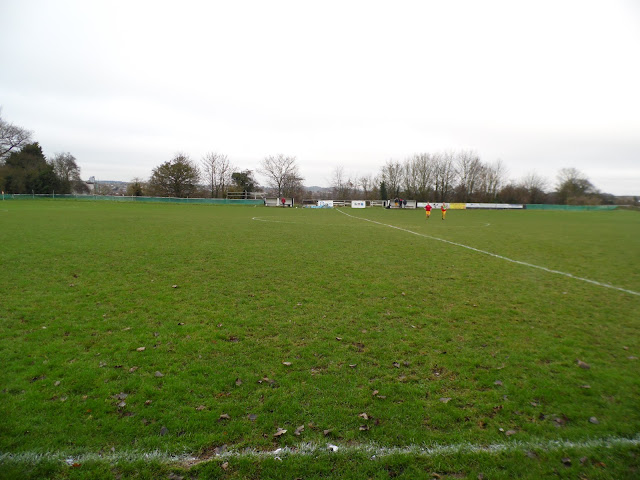 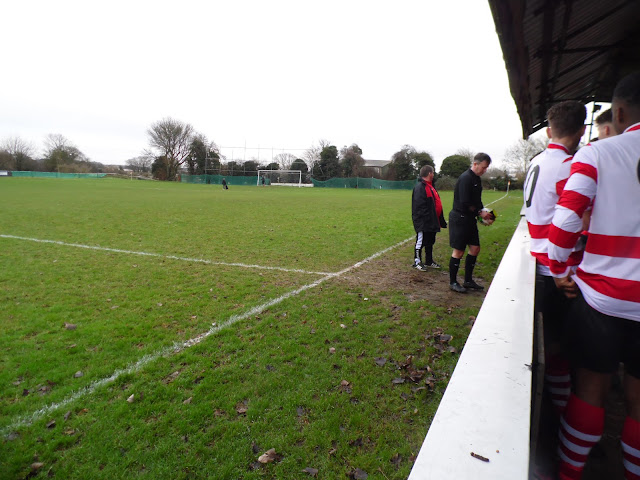 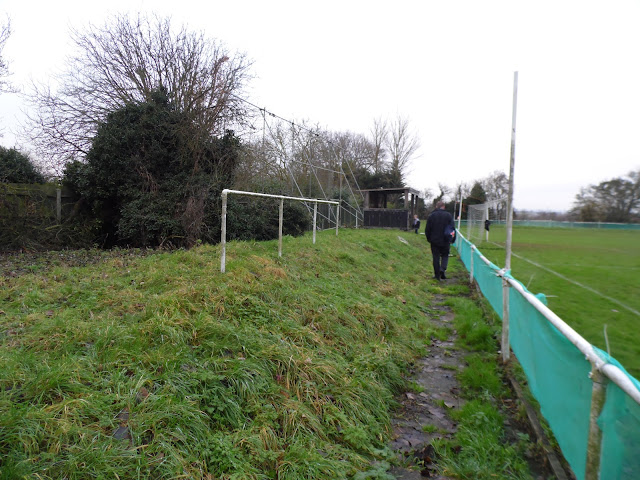 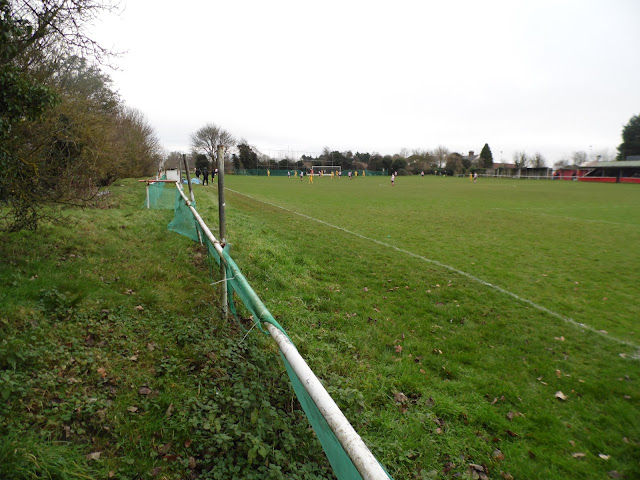