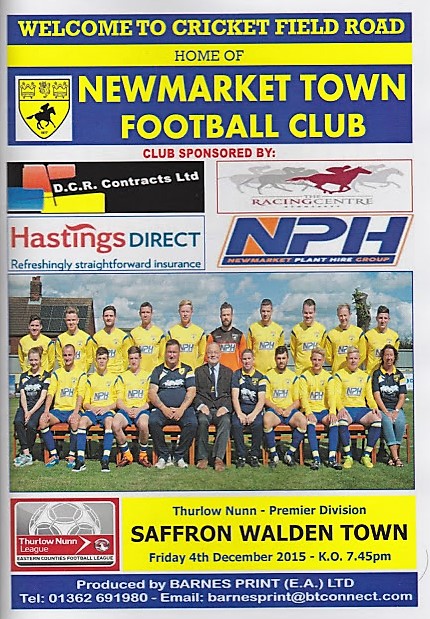 NEWMARKET TOWN FC was formed in 1877, making them one of the oldest clubs in Suffolk, and indeed the country. In terms of well-recognised leagues, they have never ventured anywhere other than the Eastern Counties, firstly in 1937 and right up until the current day although there have been a couple of breaks in between.  They've been ever-present since 1959 and since the league became a 2 tier system they have remained in the higher league in all but 2 seasons. On each occasion, they bounced back straight away.  In terms of best ever finish they had a couple of 3rd places finishes in the early '90s, plus the runners-up spot in 1967. This season they were doing very well, sitting in 5th place and with a chance of getting 2nd behind runaway leaders Norwich United, should a run of good results occur.

In the FA Cup, the 4th Qualifying Round was reached in the 1992-93 season. Victories over Langford, Tilbury, Baldock Town and Grays Athletic set up a 4th Qualifying Round game against Hayes. The prize would have been a trip to the Goldstone Ground to play Brighton & Hove Albion in the 1st Round, but Newmarket went down 2-0. In the FA Trophy, they reached the 2nd Qualifying Round in their only season in the competition. The Quarter Final of the FA Vase was reached in 2006 where they lost to Cammell Laird. In terms of local cup wins, there have been a fair few, most recently the Eastern Counties League Cup in 2014. The town itself is most famous for its part in horse racing with 2 racecourses and is home to the National Horse Racing Museum as well as being residence to famous jockey Frankie Dettori. These give rise to the club's nickname of the Jockeys. 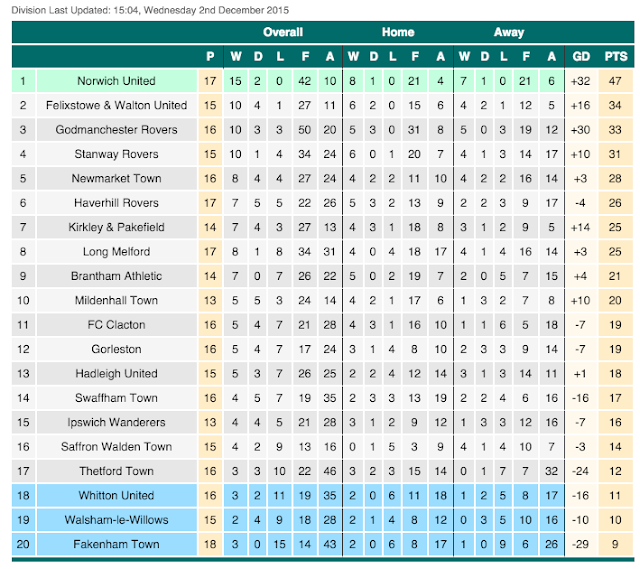 As I've said before on this blog, I love a bit of Friday night football. This was even more so when I knew I'd be drinking a few on Saturday, as I would be for Millwall v Wycombe Wanderers and a day in London less than 24 hours. I wasn't sure if Anwar would be coming with me, but even if he wasn't it was under 90 miles each way, which is manageable, cost wise on my own. It would also give me a chance to tick off the town's Wetherspoons for dinner and previous games in the Eastern Counties League had been of a good standard. It was just a shame that the league's attitude towards other organised groundhops left a lot to be desired. Two seasons in a row they had scheduled their hops against the long-established North Berkshire Hop, creating a lot of bad feeling and leaving hoppers with a sometimes difficult choice to make. 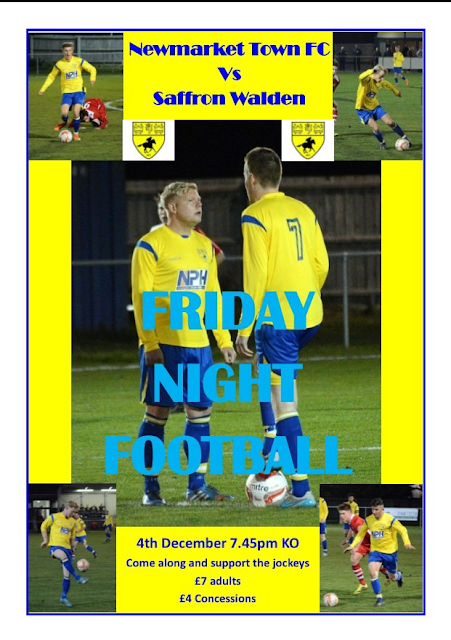 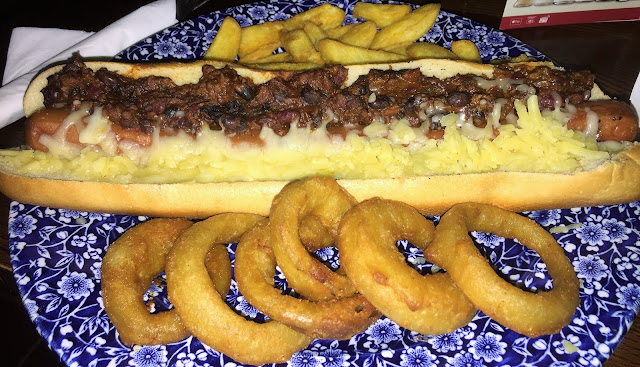 I’d not had the greatest nights sleep the day before and so I was pretty tired when I went to work at 4am in the morning. Luckily this Friday was not so brutal and I was out by 1PM. I spent the early afternoon at home, leaving at 4PM. The journey started slowly, having to queue for 15 minutes at Amersham roundabout when I normally have less than a minutes wait. I hoped this was not a sign of things to come. It didn't, at least not on the single carriageways leading up to the M25. There was more misery on the motorway with slow and stopped traffic for ages after I got on. It was only once I got to St Albans that things got moving but from then on it was plain sailing with me getting to Newmarket at 6.20. Before I went into town I popped inside the ground and secured a programme which was included in the £7 entry. I then walked into town to the Wetherspoons, The Golden Lion. They had boxed ciders- Old Rosie and Westons Country Perry but in the end, I opted for one of the house drinks, Thatchers Gold. This was one that was included with my meal, a gigantic Chilli Hot Dog with all the trimmings (OK- chips and onion rings) for £7.15. I've got a huge appetite but even this filled me up. I left the pub at 7.05, making my way back to the ground. I got there at 7.20, settling up with my entry and getting some pictures before the game started. I'd forgotten to check my wallet before I came back but luckily I just about scraped together the £7 I needed. 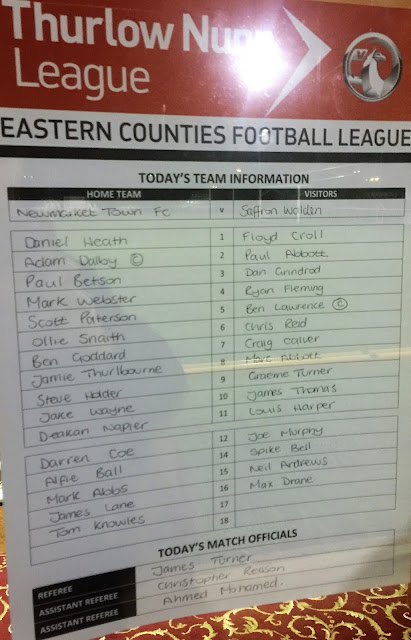 Both sides had chances but the first real one came on 15 minutes. The hosts thought they'd opened the scoring with a volley on the turn, but it was ruled offside. It was Saffron Walden who opened the scoring just over 5 minutes later when a great cross was nodded into the net by James Thomas. Newmarket got their equaliser on the half-hour mark - slack defending from the visitors allowing Steve Holder to finish from close range. Saffron Walden had bought a sizeable support and they were delighted when they took the lead on 62 minutes, Thomas following up for his second after the home keeper fumbled the initial shot. That was how it stayed with only half chances before the referee blew for full time. I went and got a few more pictures of the ground before leaving. I was glad I'd parked outside as those in the car park still hadn't been let out when I left. I stopped at the local Asda on the way out of Newmarket but it was only a crappy little one and they didn't have the cans of Diet Irn Bru I wanted for football tomorrow. The journey home was decent, listening to Absolute 80s on the radio. I got in at 11.30, watching TV and going to bed just before 1am. 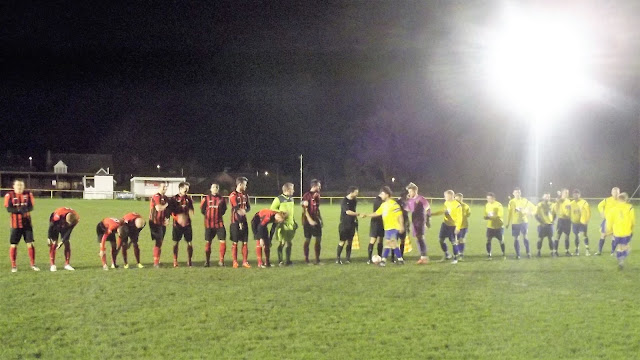 CRICKET FIELD ROAD is a very nice ground to visit, with plenty of ramshackle features and barely a straight line anywhere. One thing that is fairly new is the main stand, which looked like it had been built sometime in the 1990s and holds around 200. There are a couple of small dugouts in front of this, but these are unused. Also on this side is the clubhouse with a fairly limited range of drinks and a tea bar with a great range of items. Furthermore there is more cover, mainly standing but there are also a few random chairs dotted around. On the other side is a strange wooden structure that has seen better days, but I like it, even if it didn't seem too steady in the strong winds. The rest of the ground is open hard standing.

The town centre is a mile away, an easy 20-minute walk. There are a number of outlets there including a Wetherspoons that is well above average for food but a tad disappointing for drinks on that particular pub chain's scale. The matchday programme is very good considering it's included with entry and everyone I encountered was very friendly, making them well worth a visit. 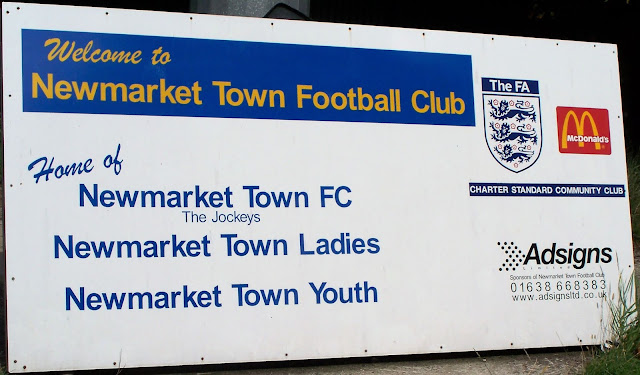 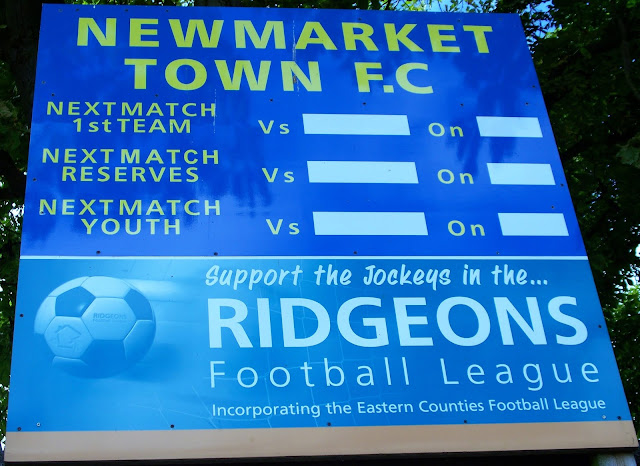 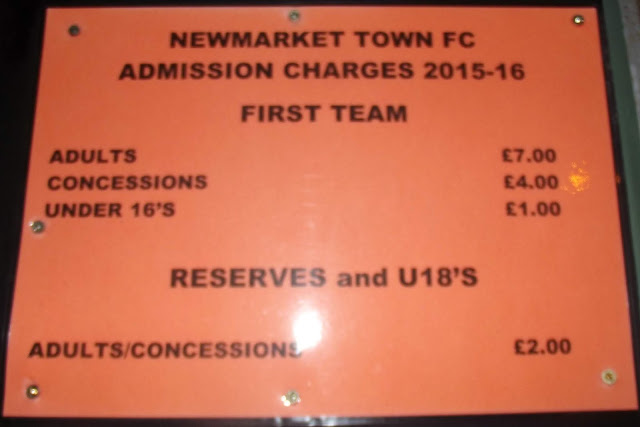 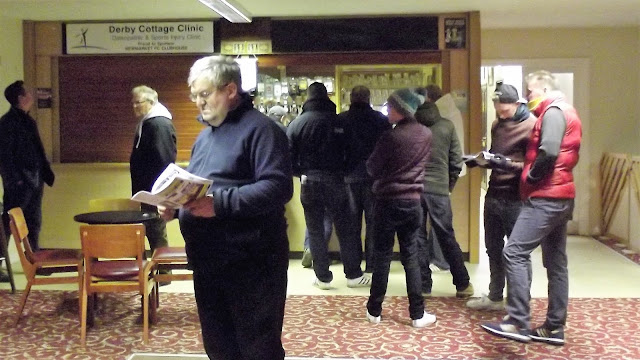 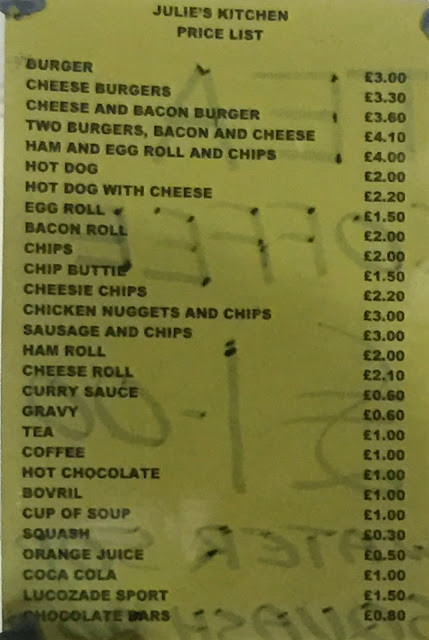 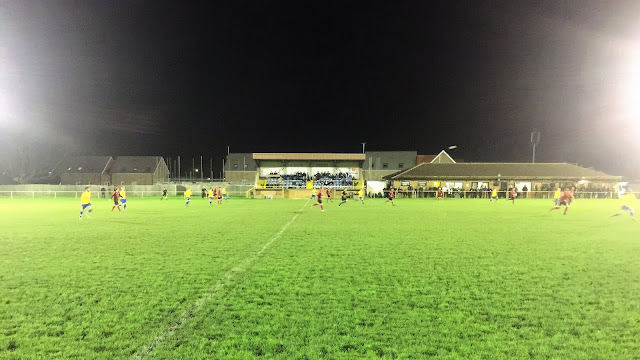 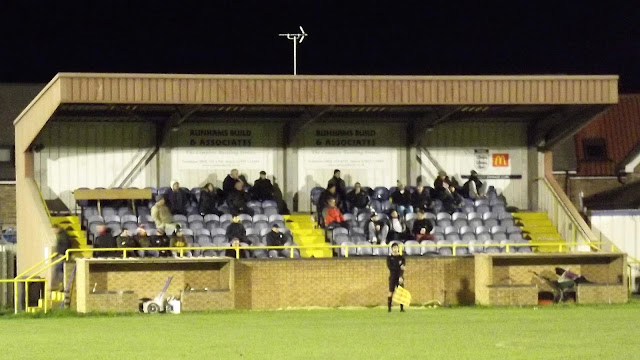 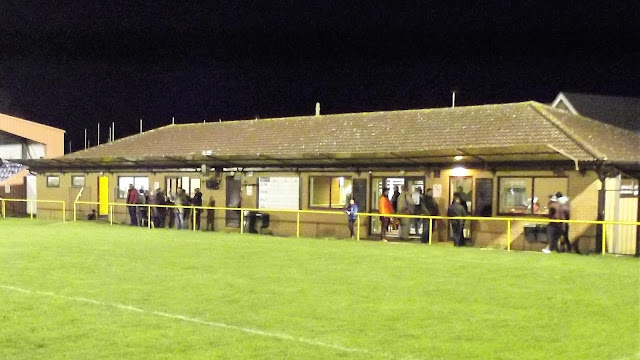 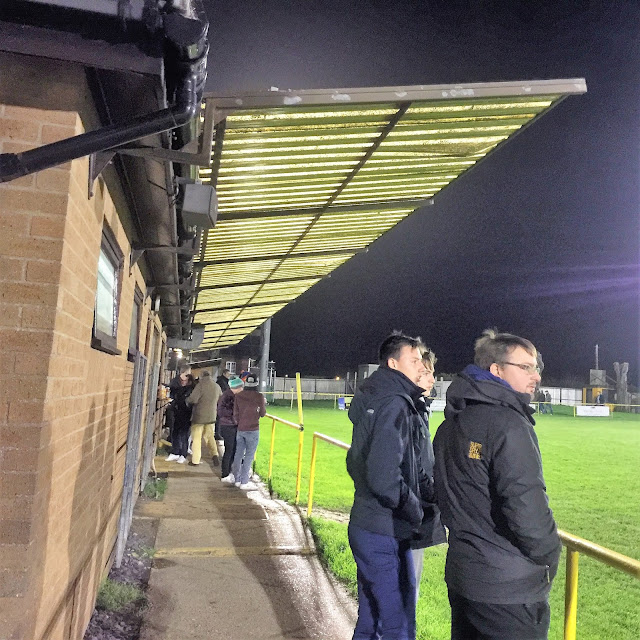 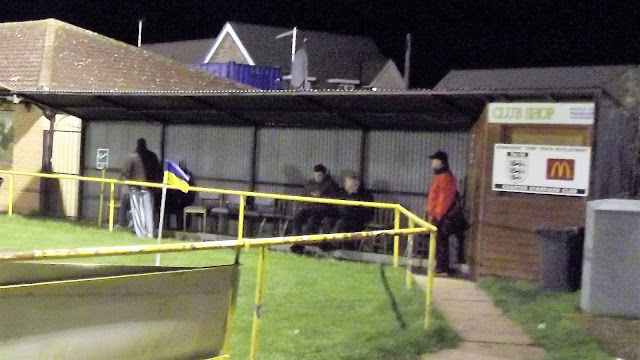 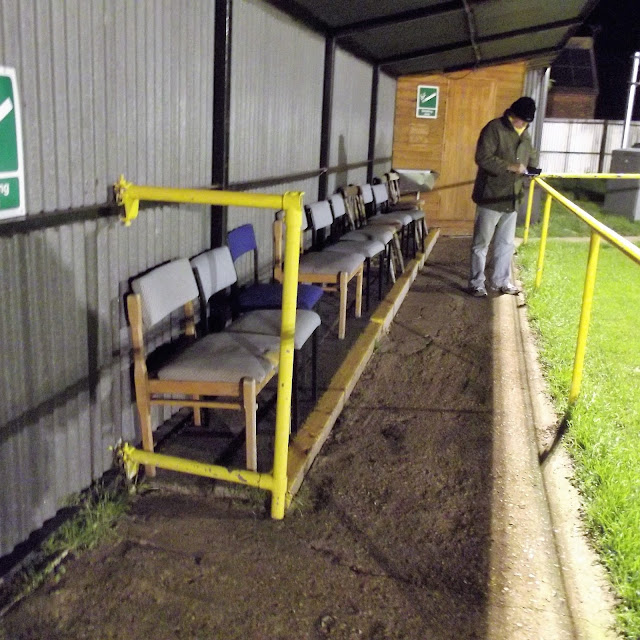 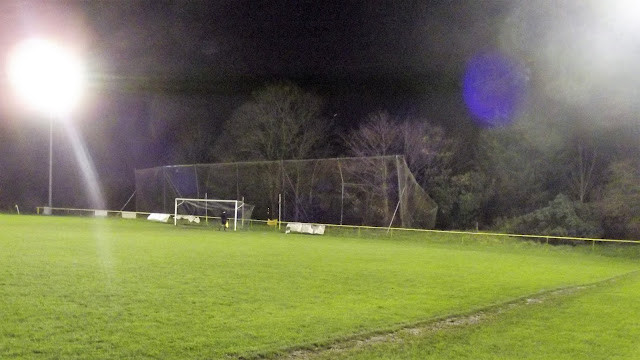 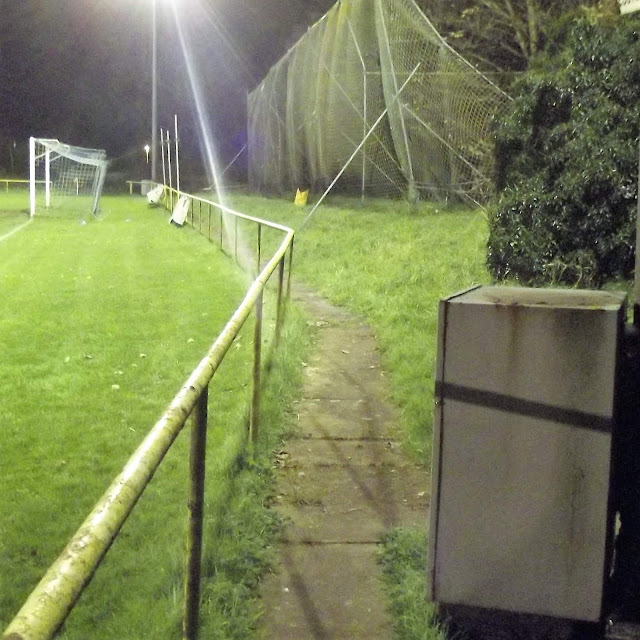 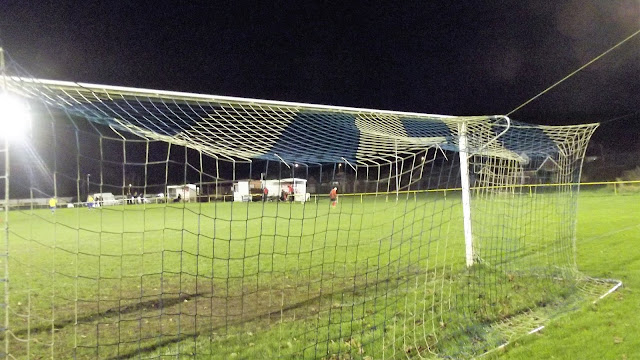 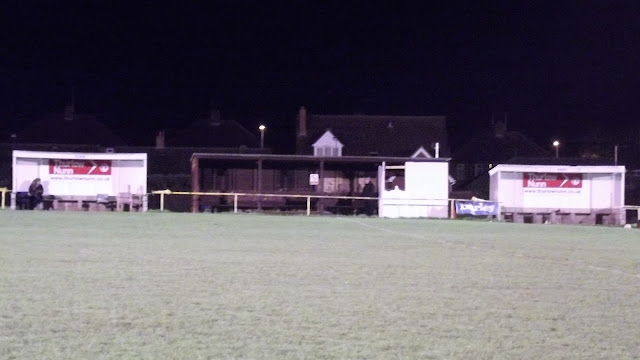 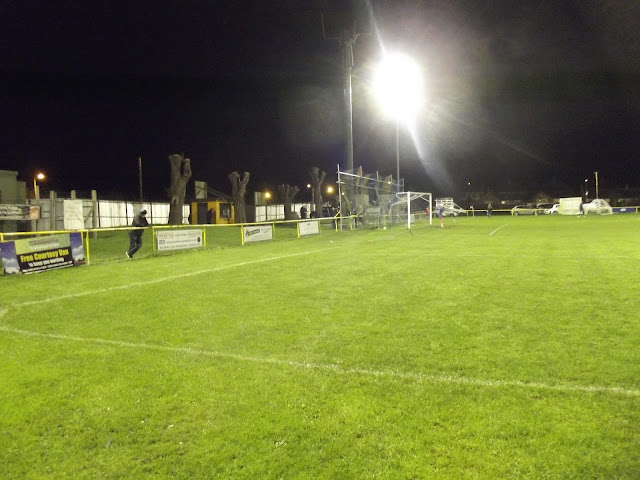