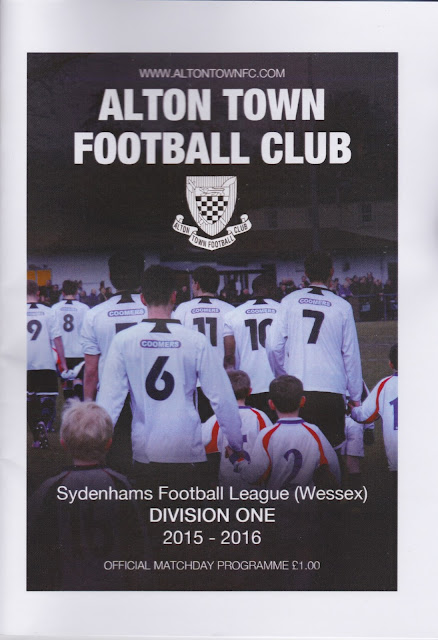 Initially the plan on this Tuesday the plan was to go to Mangotsfield United v Bristol Rovers in the Gloucestershire Senior Cup with Anwar. However we kept an open mind and so on Sunday I presented him with a list of nearly 50 possibilities. However, the following day he let me know that he wouldn't be able to do a game, as it was a couple of expensive weekends for him either side. So I'd have to be paying the full amount of fuel costs on my own, though at least I'd get free reign of where to go. I'd heard on the grapevine that Alton Town would be moving ground soon, and so  wanted to tick it whilst I could. Luckily it was also one of the closest at 55 miles away. A look at their excellent website confirmed that they were playing Fleet Spurs, weather permitting of course. I noticed a fair few other hoppers had this game on the radar, what with the ground not having long left. 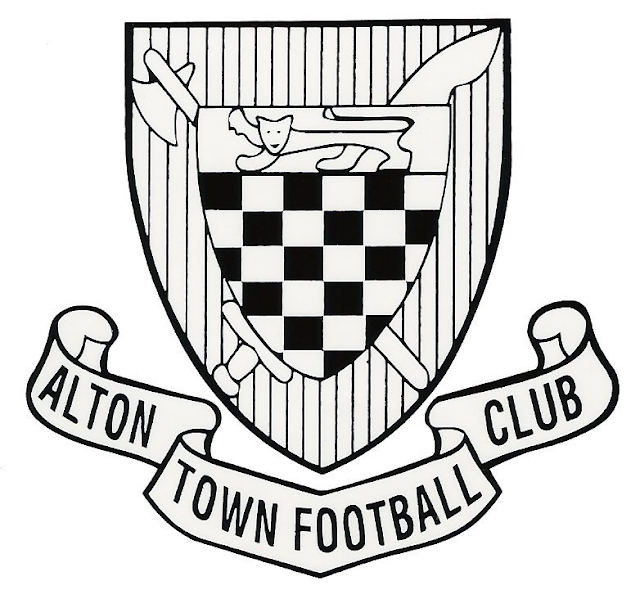 ALTON TOWN were formed in 1991, following the merger of Alton Town with Bass Alton, a team sponsored by a local brewery and who owned the ground that the team would eventually move in to. They started in the Hampshire League and stayed there until 2002 when they were Champions of the league for the second time. However, unlike 1998, they now had the ground in place to make the step up to the Wessex League. Despite being placed in the Premier Division upon reorganisation, most of their time at the higher tier was a struggle and the highest placing they ever finished was 10th in the 2011/12 season. In 2013 they were transferred to the Combined Counties League Premier due to the geographical boundaries changing. Their first season in their new surroundings ended in relegation, with only Chessington & Hook keeping them off the foot of the table. Last season they didn't fare much better, finishing 13th out of 16 teams in the CCL Division 1. This year has seen a return to the Wessex League, and ai improvement in form, with them sitting 9th at the start of the game.

In the FA Cup, the old Alton Town had reached the 1st Round in the 1970s where they lost to Newport County. Since the merger 2010/11 proved their best season. Chichester City and Merstham were beaten, before a notable victory over Conference South side and renowned giantkillers Sutton United. Their run ended in the 2nd Qualifying Round, going out to Southern Leaguers Cinderford Town after a replay. The following season saw them have their best FA Vase run of recent times, reaching the 2nd Round before losing to Wantage Town. 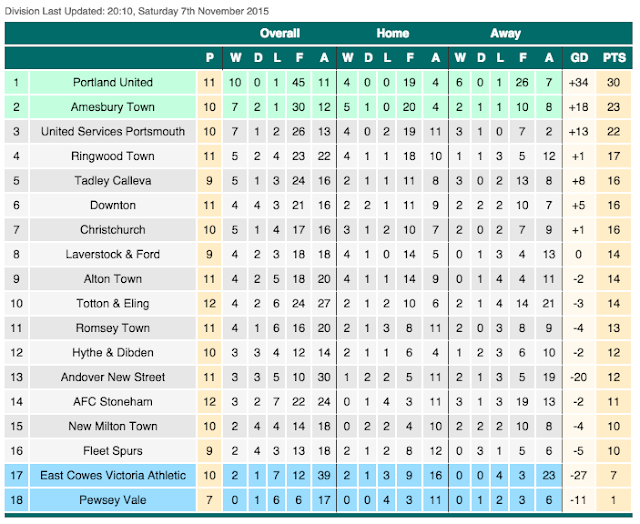 On the Monday night before the game I watched the FA Cup draw. I was hoping that we'd get Salford away, or failing that a meet up with good friends at the likes of Grimsby or Doncaster. There was huge disappointment for me when we are drawn away at Millwall, a tricky tie and hardly the most welcoming of venues. I guess I'll see how much they want for tickets and what other options there are before making a final decision. Ironically if I follow the chain all the way back I find myself at the very first FA Cup game of the season I went to - Coleshill Town's 11-0 hammering of Ellesmere Rangers.

It was my day off work on the day of the game, and after I'd been to the doctors for a flu jab, I did my usual drill of a 4 mile walk into town. I picked up a few bits before getting a lift home with my dad. After coming home I spent the afternoon relaxing and doing some research for this blog. I also ordered my ticket for the Wycombe Wanderers v Leeds United game on Friday night. There were a couple of decent looking pubs in Alton, including a Wetherspoons which I would have visited had I had people coming with me. However as I was on my own and bearing the cost of fuel alone, I decided to have dinner at home and leave just before 5.30PM. I’d noticed that an ever increasing number of hoppers would be attending, and I wanted to boost my chances of getting a programme on the night. 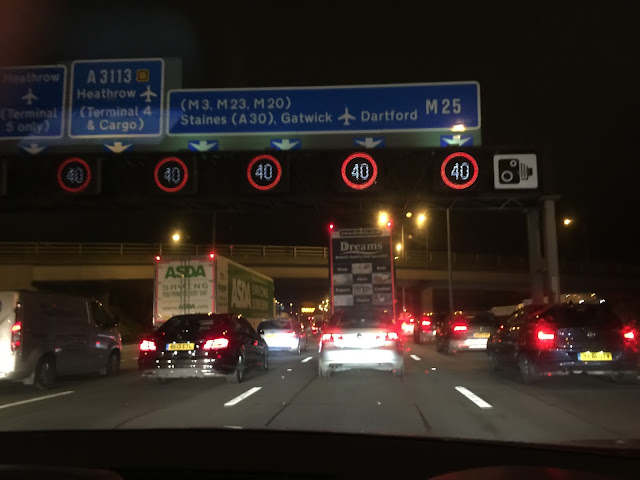 It was the usual poor quality M25 around Heathrow and I was delayed around 20 minutes. The M3 wasn't great either with a 50mph limit and roadworks for it's entirety. Once I got on the A Roads it was a lot better and I got to the ground at 6.50. After grabbing one of the last spaces in the car park I received a friendly welcome. Sadly there was no programme on the night so after paying £6 to get in I went in the bar to see if I could track an old one down. I met up with another groundhopper Andy and we procured a few old ones. Later on we gave the club a pound and our address and they promised to send us one from today's game when they were printed. We also met a number of other hoppers - Mishi from Dulwich and Jack from Lowestoft and we had a good catch up. We all went out just before kick off, with me choosing to stand on the halfway line. 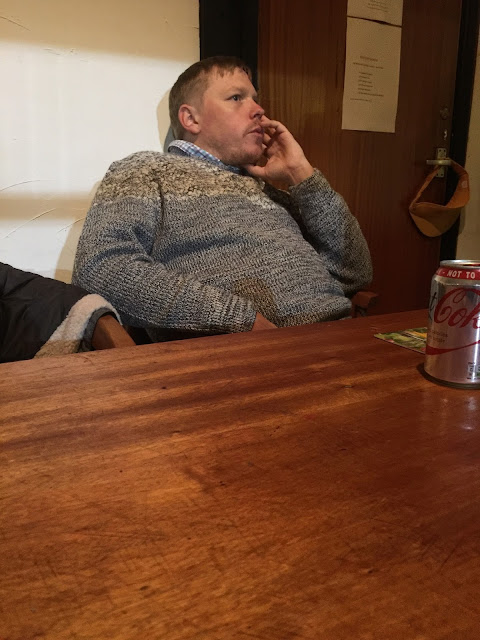 Looking at the table, I was guessing that Alton Town would be firm favourites for the game. They were much higher in the table and had a great home record. with Fleet Spurs yet to win on their travels. The way the game started backed these facts up with the hosts having the better of the game. It was a good full blooded contest, not dirty but with firm commitment from both sides. 15 minutes in, Fleet had their first chance of the game. A free kick was awarded on the edge of the area and the decent effort was tipped wide by the keeper. Straight away the hosts went up the other end on the counter and the number 10 forced a great save out of the visiting keeper. Alton thought they'd taken the lead in the 38th minute, but the close range finish was ruled out for offside.

Though it had been goalless at half time it had been a good contest. The second half started in much the same way with the home side edging it. However it was Fleet Spurs who took the lead with 2 quickfire goals around 10 minutes into the second period. Both were scored by Sam Knowles - the first a tap in and the second a smart lob over the keeper. From there on they did a good job of taking the sting out of the game and in the end won comfortably, even though there were chances for both sides. 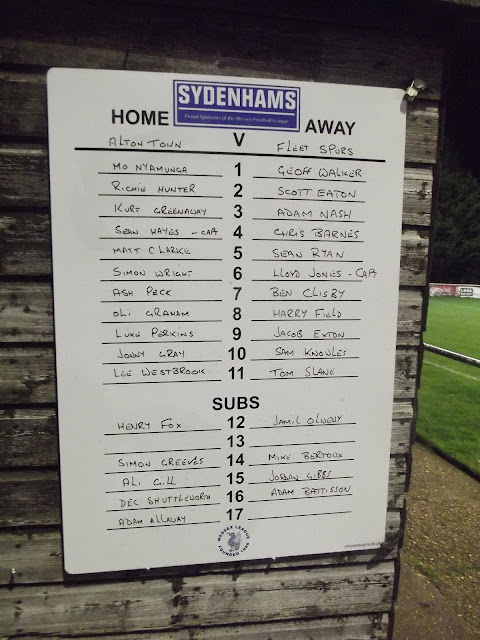 It had been a good evening meeting up with a few familiar faces and had been a decent game of football too. The hosts had been very welcoming and friendly but on the playing side they would have been disappointed not to get at least a point from the game. I made great progress on the first leg of my journey but then some plank decided to close part of the M3. While the diversion was well signposted for once, right in the middle of it there was a set of roadworks with traffic lights and single file traffic. This resulted in a 20 minute delay with me getting in at 11. I watched TV for a bit before going to sleep around midnight. 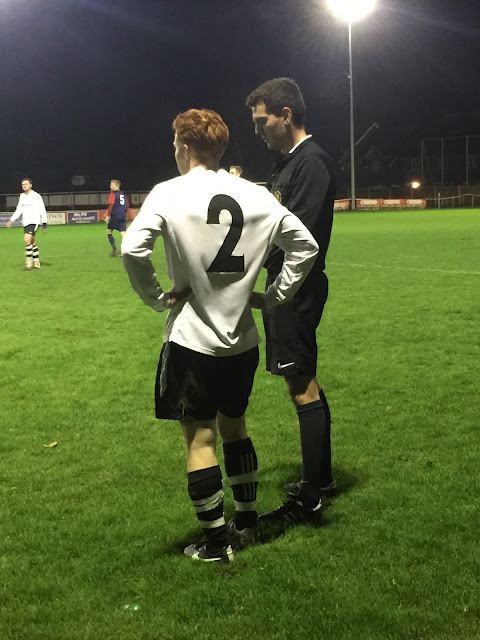 BASS SPORTS GROUND will be going within the next sad weeks and will be a sad loss. Though the vast majority of it us open standing, it's all painted in the club colours of black and white which adds to the character of the place. There is an old main stand, obviously there for a long while that seats around 150 and it's a refreshing change from the metal flat pack stands that a lot of grounds have now. The bar and tea bar are pretty much standard fare, though I didn't indulge on the night. The town looks nice and is not far away if you are happy to walk. 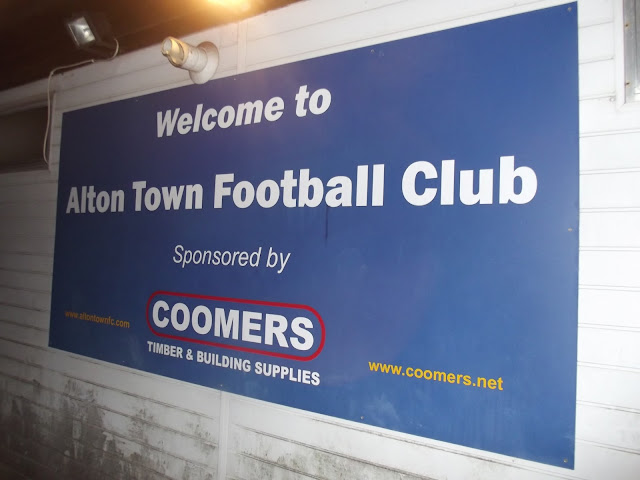 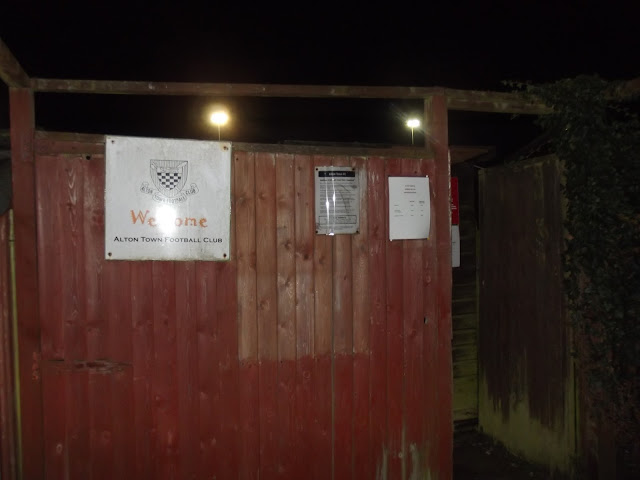 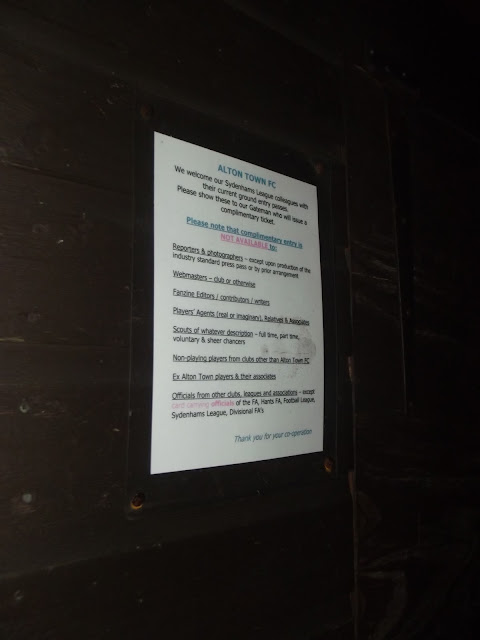 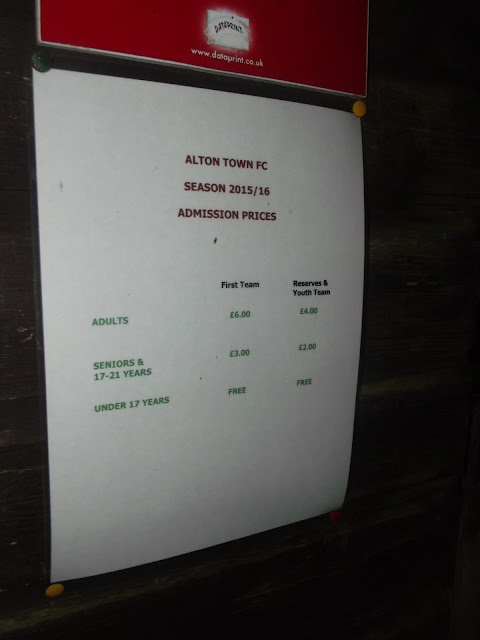 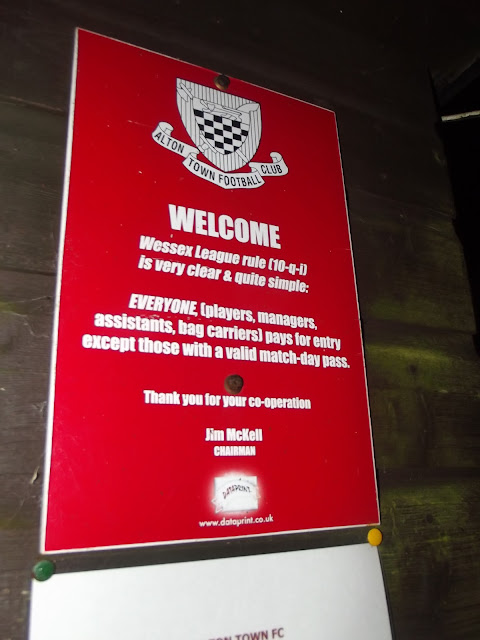 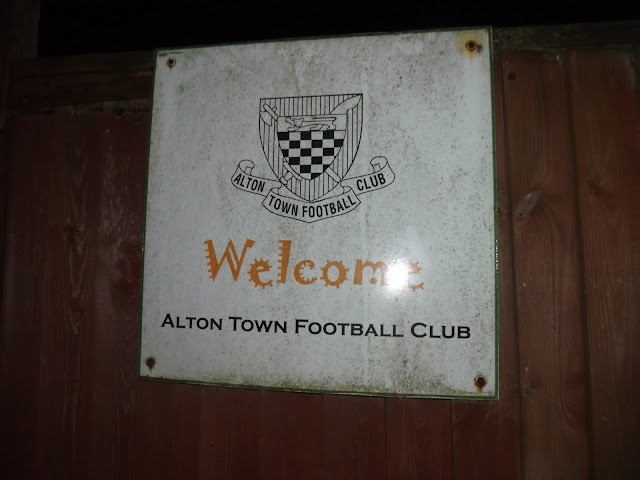 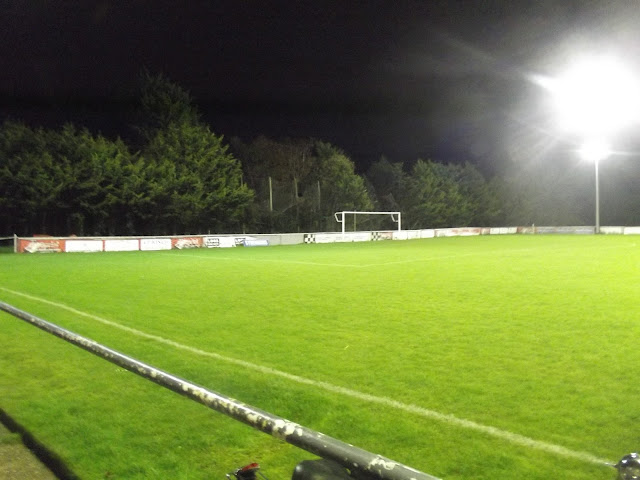 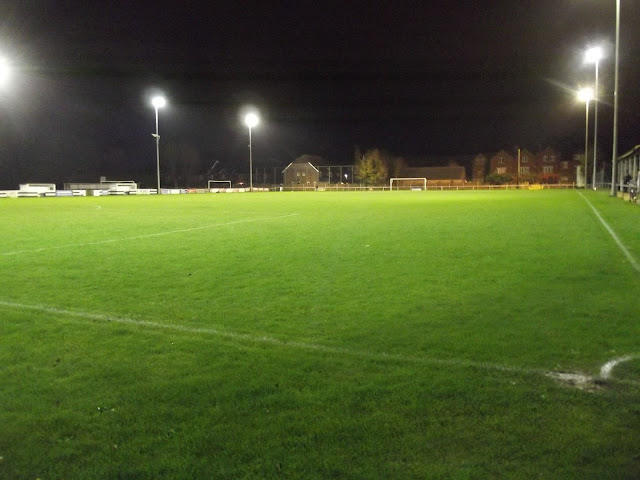 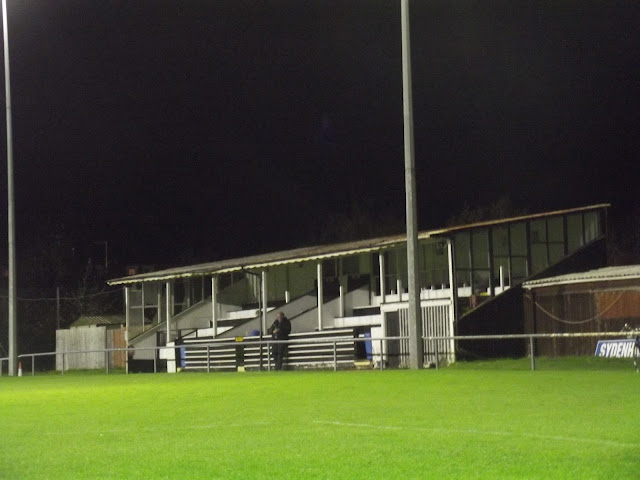 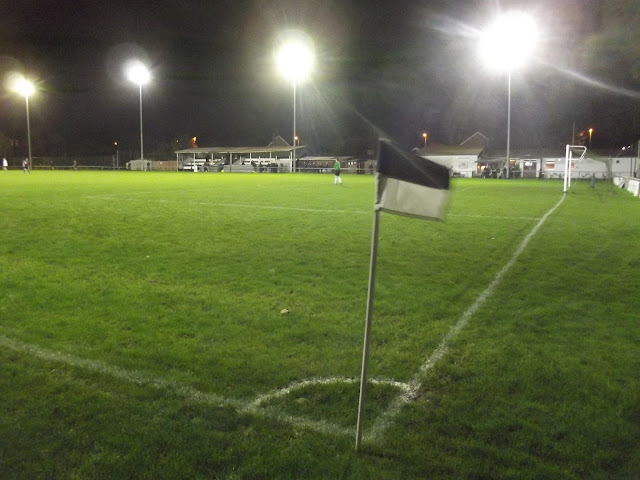 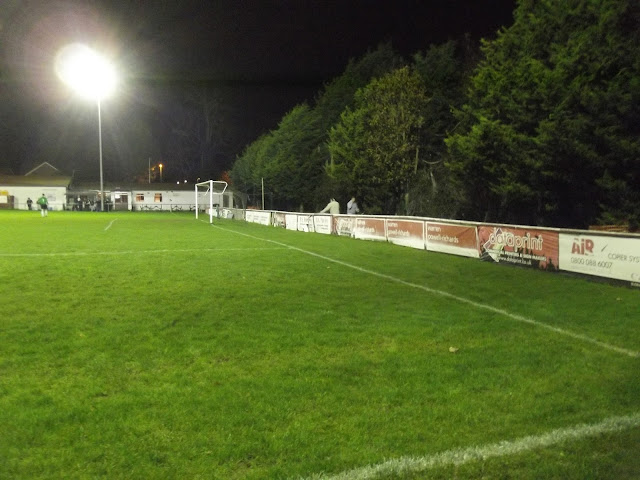 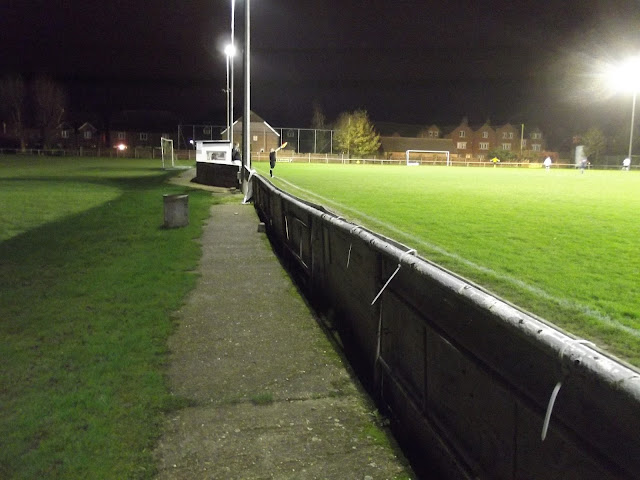 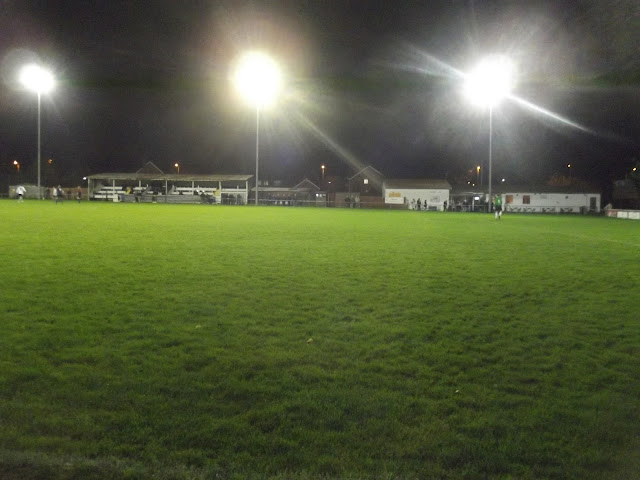 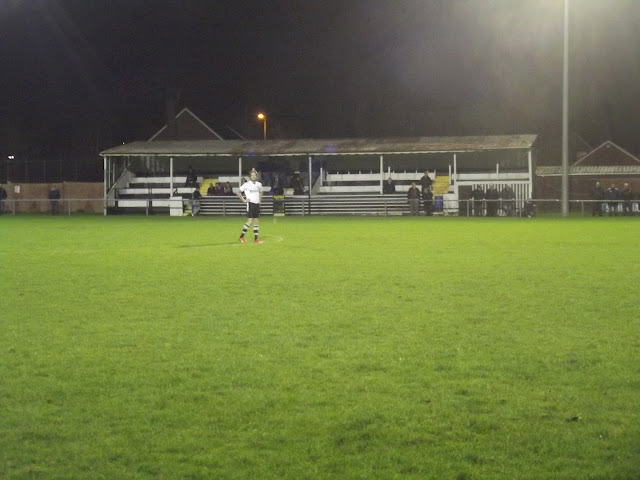 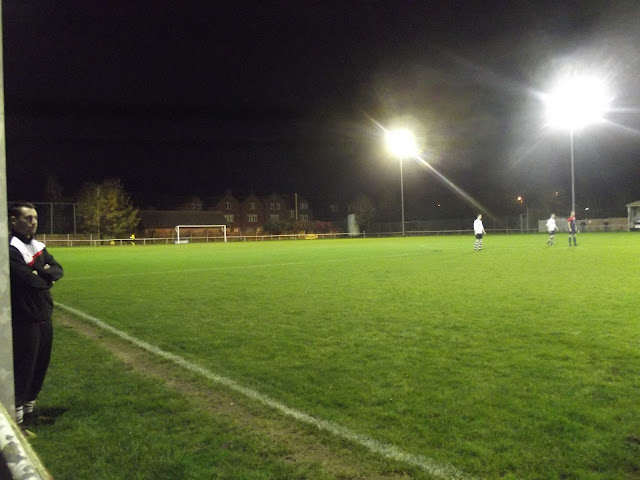 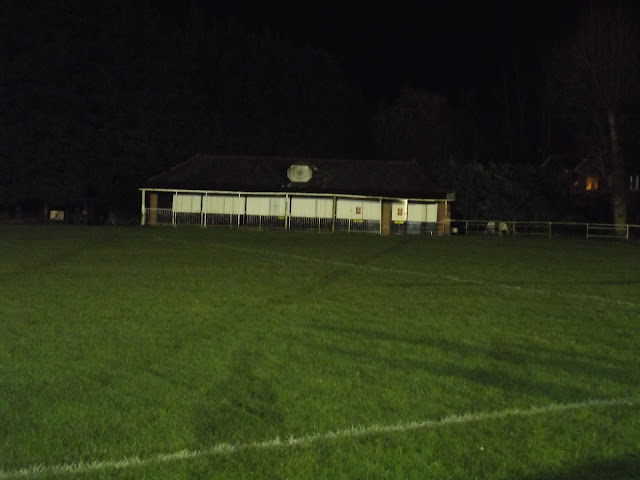 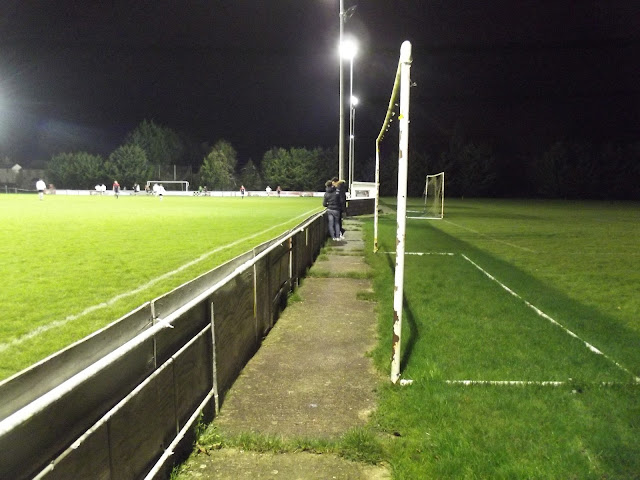 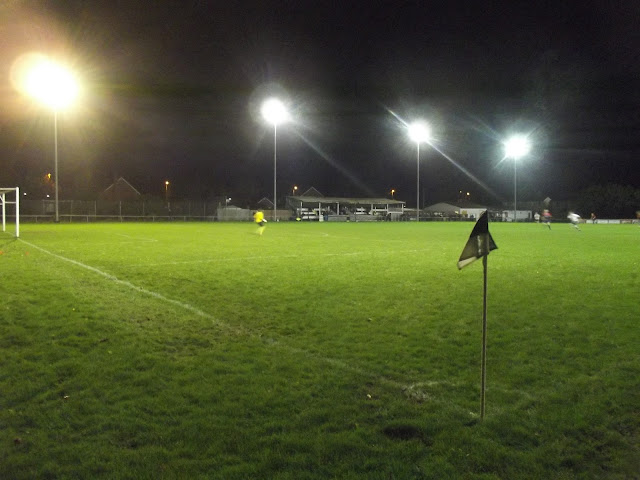 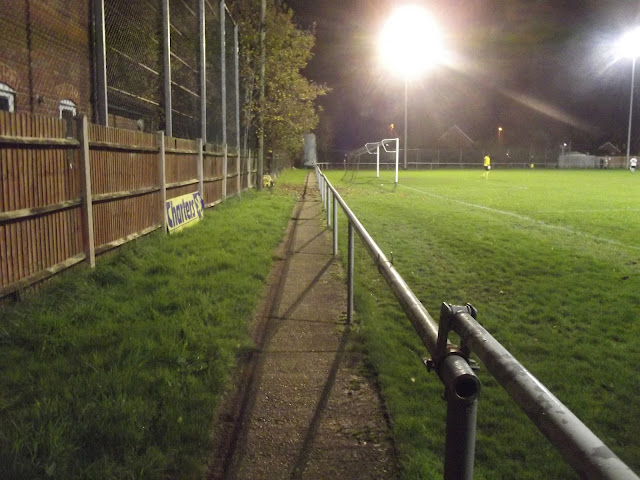 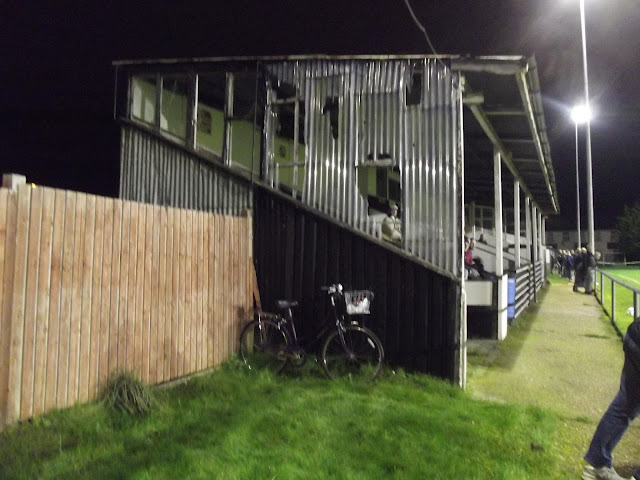 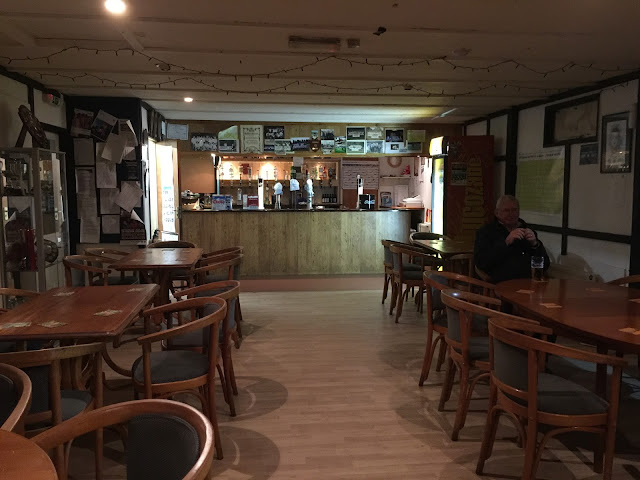 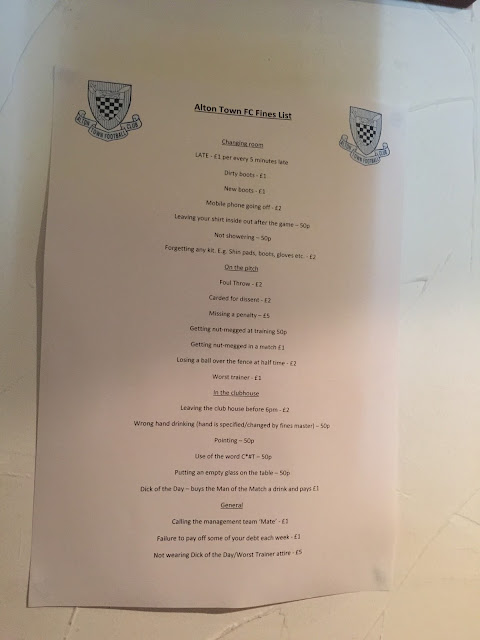 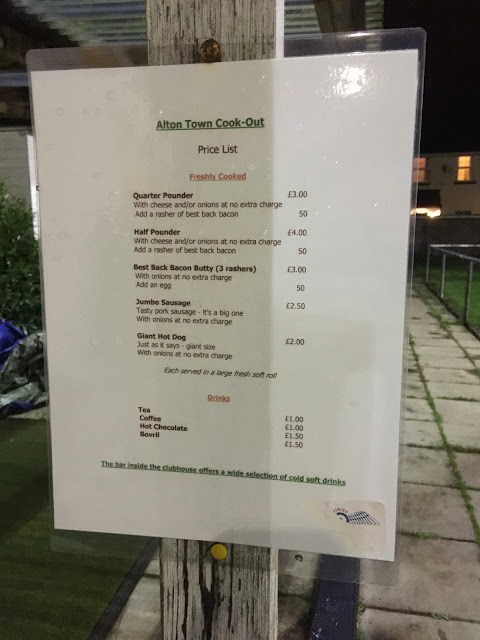