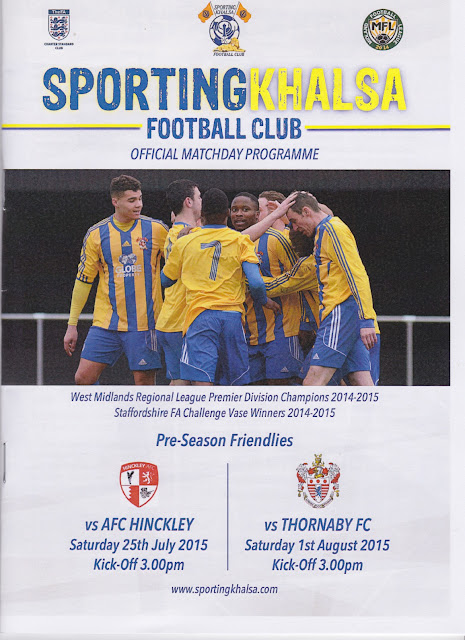 SPORTING KHALSA was formed in 1991 and have since become the only Asian team in the English leagues to own their own ground. Located in Willenhall, Noose Lane was originally the home of Willenhall Town, but Khalsa bought it off of them in 2010. Footballing wise, they joined the West Midlands Regional League on a permanent basis in 2004 after spending one unsuccessful season there during 1996-97. Starting in Division 2, they won promotion at the first attempt. Despite struggling at first at the higher level, they had a big turnaround in the 2010/11, finishing 3rd and winning promotion to the Premier Division. After finishing 14th, 11th and 6th they were Champions last season and won promotion to step 5 of the non-league pyramid. For the coming season, they will take their place in the Midland League, alongside Phoenix club Hereford FC.

Success in the FA Competitions has been limited. It wasn't until last season that they won an FA Vase game, after 7 defeats. They beat Wolverhampton Casuals 4-0 before going out to North West Counties League side Hanley Town in a 2nd Qualifying Round replay. They've also reached the Preliminary Round of the FA Cup on 2 occasions, taking Nuneaton Griff to a replay in 2012/13, their debut season in the competition. 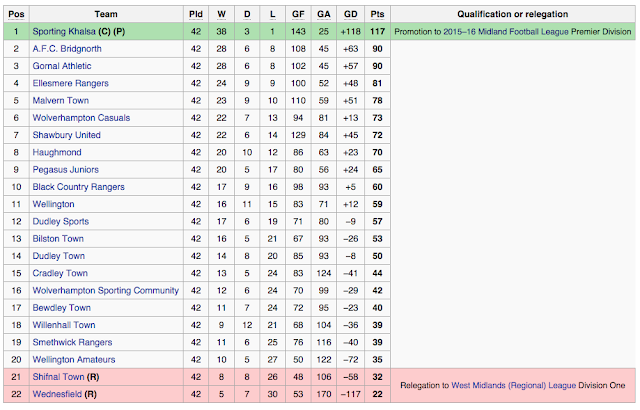 With my 500th ground being next up after this one, I was not too fussy about where I groundhopped, so much so that I had 40 options to choose from. As Anwar was coming with me, I passed the list on to him and he whittled the list down further to 5 or 6 choices. Ideally, I'd have wanted one near at Wetherspoons as it was the last weekend of the cider festival. In the midweek before the game, I had sampled 27 of the 30 ciders on offer, thanks to previous tries. I knew that the last 3 would be tricky to find and so I wanted to spread my net as wide as possible. I found one that had been on our 'to do' for a while. Sporting Khalsa had an excellent looking bar that did a nice selection of curry and other spicy food, and all at very good prices. So their game v Hinckley was chosen as our match for the day. There was a Wetherspoons a mile walk away, but it would depend on how much time we had as to whether I would pay a visit. The weekend started off with a big disappointment. On Friday I was hoping to walk to and from town. I always enjoy a good bit of exercise and there would have been a good reward in the middle what with the cider festival. Instead, I had to sit in while it rained heavily morning, noon and night. I had a few bottles that I had got for my birthday and went to bed quite early. I took the liberty of texting Anwar to tell him to get ready half an hour early so we would have time to walk into town as I'd not managed to get down to Wycombe. On the day of the game, I'd had quite a good night's sleep beforehand and woke up about 9 feeling nice and fresh. I had a bath and got ready, leaving at 9.40. After I had stopped at B&M Bargains and got some Irn Bru and Crunchies I made my way to Anwar's and we were on our way by 10.40. What with all the holiday traffic, there was around 20 minutes delay on the M42 and M6 and we were parked up at Sporting Khalsa by 12.40. 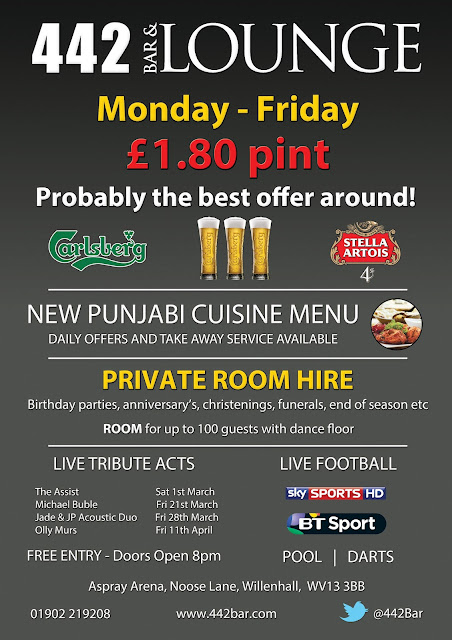 We took a walk into town, though thanks to Google Maps getting its knickers in the twist, we had to walk an extra half mile. But eventually, I got to my target, the Malthouse. It was the most deadbeat welcome I'd ever had to a Wetherspoons, with drug deals openly going on outside, people swigging from Special Brew cans and if I'm not very much mistaken, a container of white spirit. It looked very much like the Dog and Gun pub in Corrie and I was half expecting Callum to turn up. Luckily inside was a lot nicer and it presented 2 new ciders - namely Dorset Dabinett and Sandford Orchards The General. As I was drinking in thirds, I also had a retry of another one which was also nice. It didn't take me long to drink and so after 15 minutes, I met up with Anwar who had completed his walk around town and wasn't impressed. Though after what I'd seen outside the pub, it looked like the garden party at Buckingham Palace when we walked back. We got back to the ground at 1.50, starving and really looking forward to a curry or another spicy treat. But despite the kitchen being advertised as being open from 12, the chef had still not reported for work. We asked at the bar and they said 'he will be here within 4 hours'. As we had seen nothing near the ground, and town was a mile away, we asked at the turnstile if there was food in the ground, and assured there was, we paid a fiver to get in. But despite assurances to the contrary, there was no tea bar open and the programmes had not arrived yet. I was beginning to get annoyed. The only option was to drive somewhere, luckily I had only had one pint, and that was an hour ago so I was fine. The turnstile operator was fine with letting us back in and so we put the town centre in the sat nav and drove. With no visible takeaways open, I got chicken, bread and a Belgian Bun from Lidl and made my way back to the ground. The chef had still not turned up and considering the food was the sole reason I had chosen Sporting Khalsa as today's game, I wasn't in the best of moods as I had a chat with Hinckley fan 'Kirby Knitter' who I had met a couple of times before. 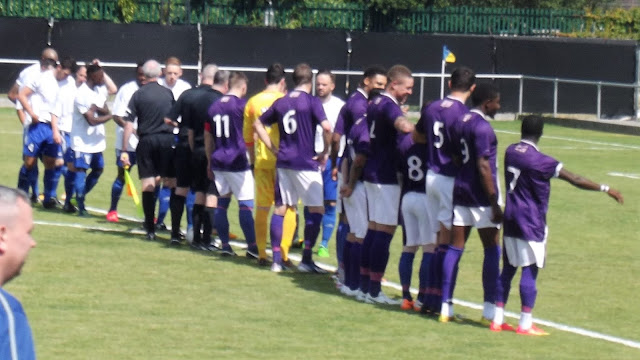 There was slight redemption when we went in the ground and nabbed the last 2 programmes, and I felt a bit better after eating my lunch. The tea bar was just opening as we got back and there was some nice stuff like Samosas and Chicken Tikka wraps, but I was already full. For the game, we decided to stand on the halfway line and got chatting to a father and son who were Retford United fans. They were good company and had lovely Yorkshire accents and the Dad sounded a bit like Neil Warnock. As for the game, the first half was a decent affair and Hinckley were unlucky not to take the lead when a neat lob was fractionally over the bar. Sporting Khalsa soon took control however and they took the lead on 6 minutes when a player had a simple finish from a very good cross. It was a good low shot on 15 minutes that doubled the advantage and it was only a great performance from the Hinckley keeper that kept the score down. With Sporting Khalsa well on top, it didn't look as if things were gonna change. However, with the second half starting at a slower pace, they pulled one back on 55 minutes with a low piledriver and the goal of the game. Chances came and went for both sides, with efforts being cleared off the line at both ends, but there were no further goals. After a bad start, it had been a good day. The journey home was much better and apart from some slow drivers on small roads, it was plain sailing. I dropped Anwar off at 6.40, getting home myself at 7. I typed this blog and later on watched Man U v Barcelona on my Raspberry Pi before going to bed at 11.

ASPRAY ARENA is a much smarter venue than when Willenhall Town owned it. It's been completely refurbished and done out in Khalsa club colours. With seating for 500 and cover for another 250, it should be good enough for step 3 football. The rest of the ground is open hard standing. The tea bar in the ground looked decent and they hope to have more merchandise once the season starts. The bar has a nice selection of drinks and the only thing that let it down was a lazy chef. I'd recommend doing a midweek visit as the menu looked very promising, and it was well priced too. The matchday programme was also an excellent effort and well worth the quid I paid for it. 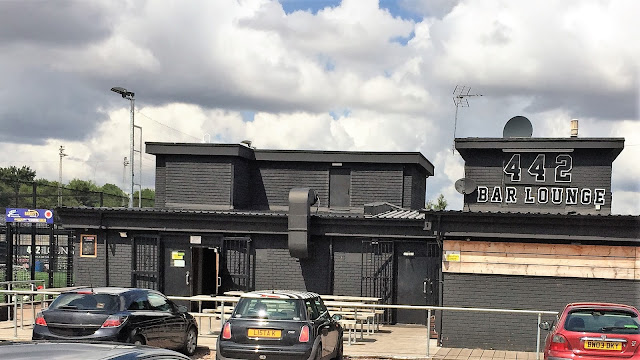 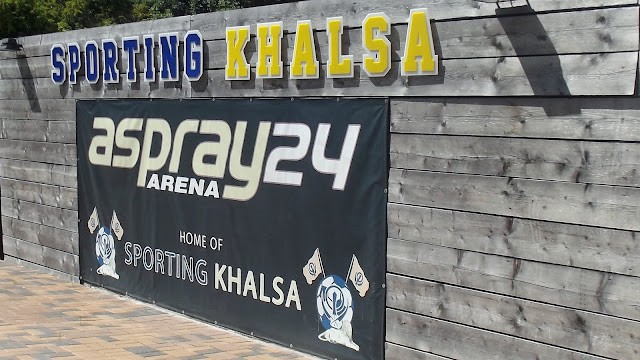 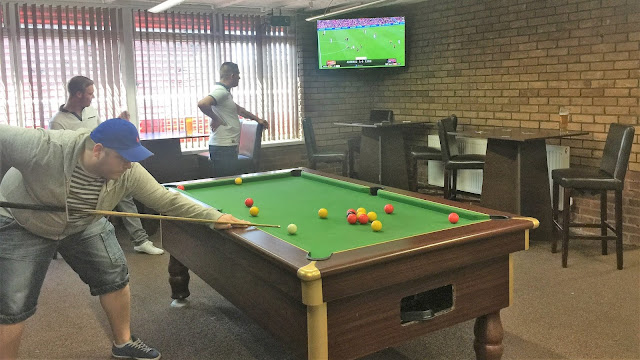 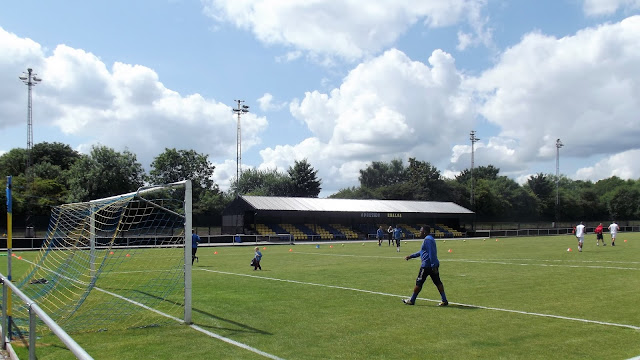 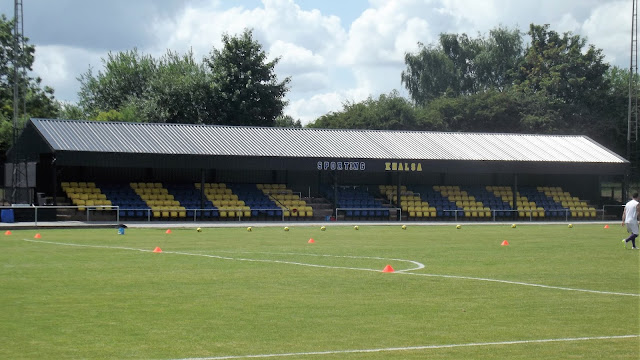 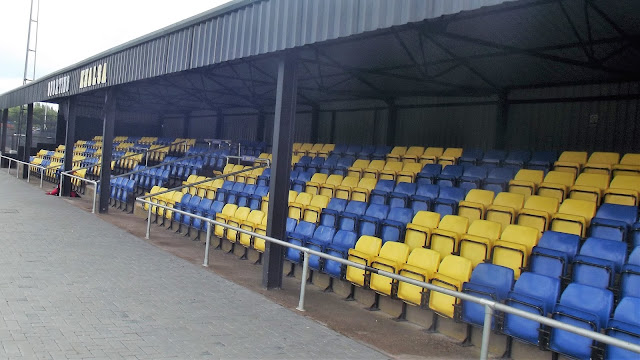 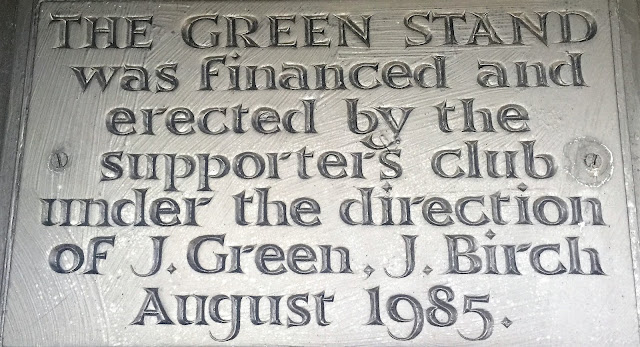 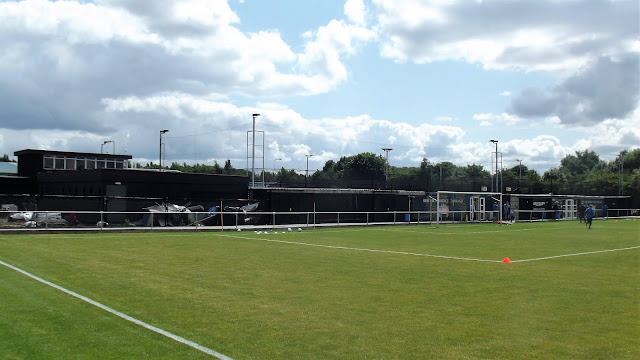 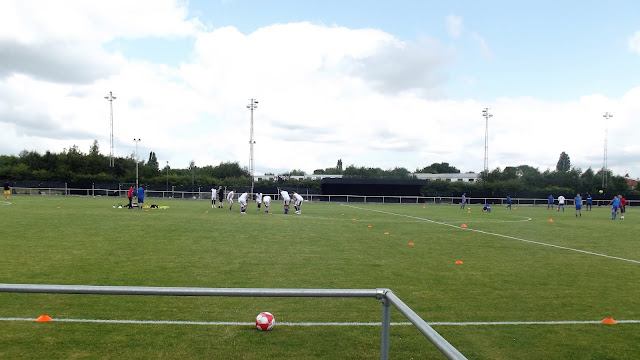 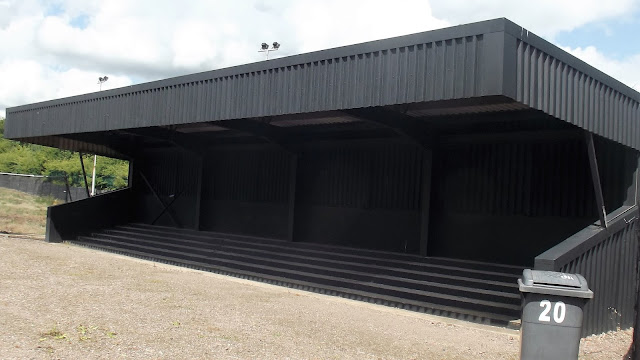 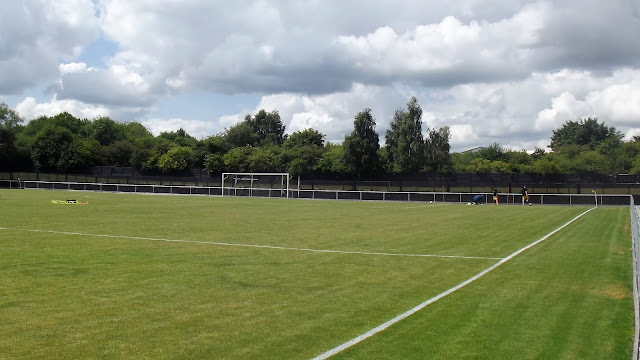 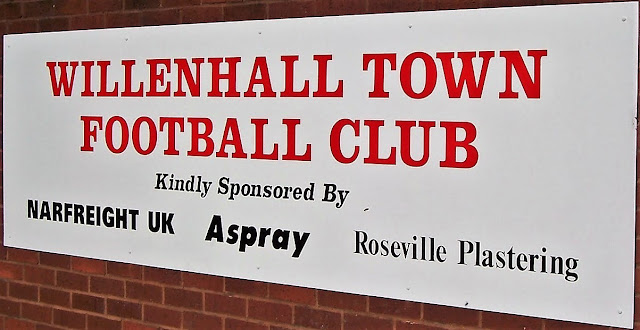 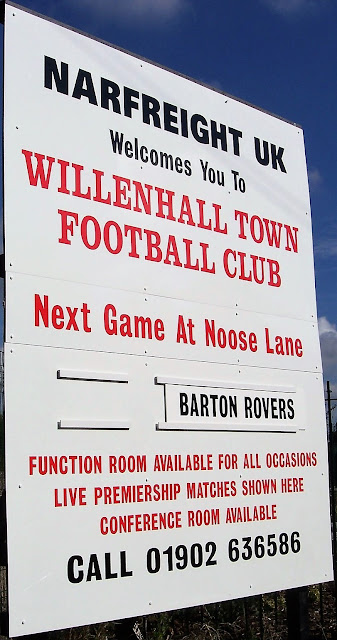 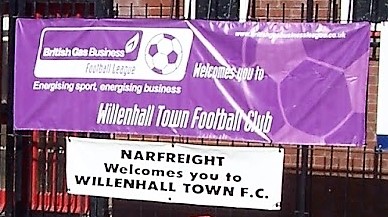 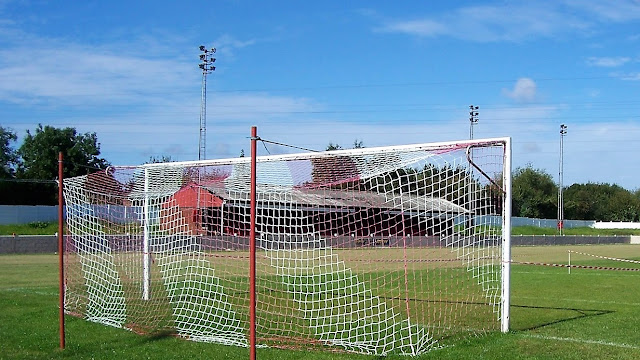 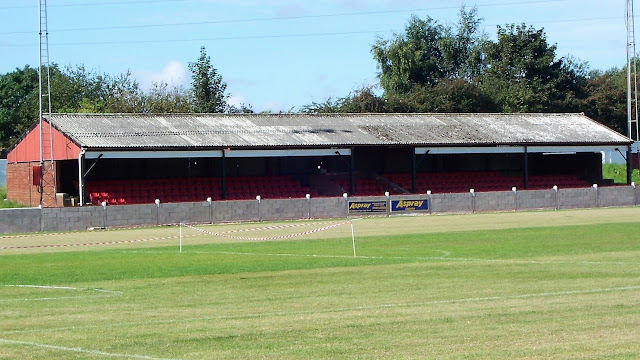 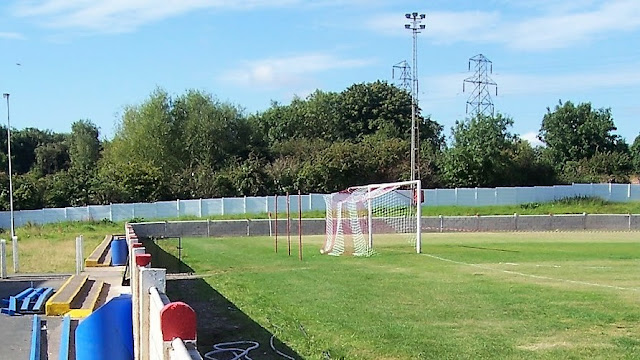 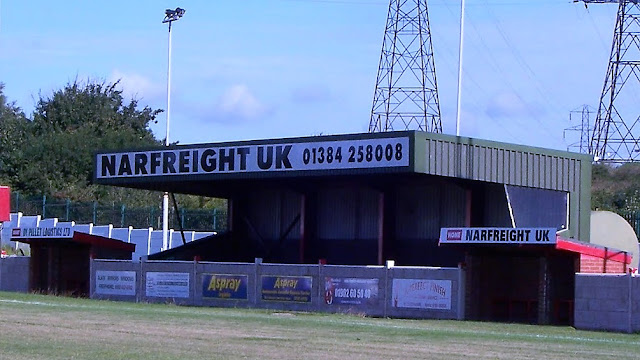