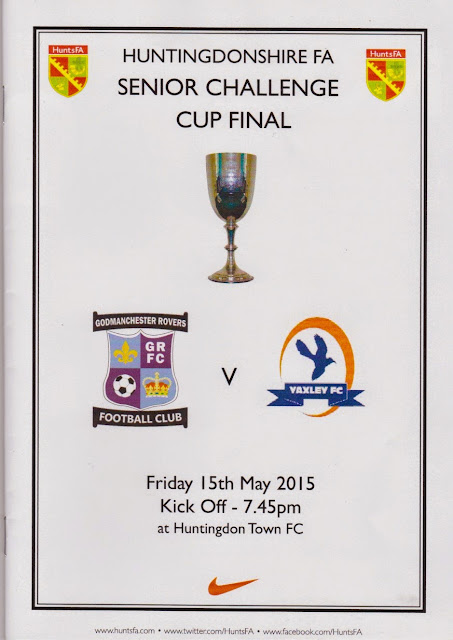 The host club, Huntingdon Town were formed in 1980, despite a previous club going by that name in the town. Originally known as Montagu and then Sun FC they played in the Cambridgeshire and West Anglian leagues. Changing their name in 1996 to the current moniker, they moved to current home Jubilee Park in 2003 which allowed them to join the United Counties League. They struggled at first in Division 1 but gradually improved. In 2012 they were Champions, earning a place in the Premier Division for the following season. a 4th placed finish was an excellent debut season and they followed that up last season with the runners up spot. Sadly for them, this season saw a drop in fortunes with them finishing in 16th, but they did at least finish well clear of relegation. They didn't have much of a history in the FA competitions, their most notable achievement on this score is reaching the FA Cup 1st Qualifying Round. The last of these was the most interesting - in a game against Sleaford Town, the game was abandoned due to a huge punch up and both teams were thrown out of the competition. The towns most famous resident is Himesh Patel, who plays Tamwar Masood in BBC soap Eastenders. 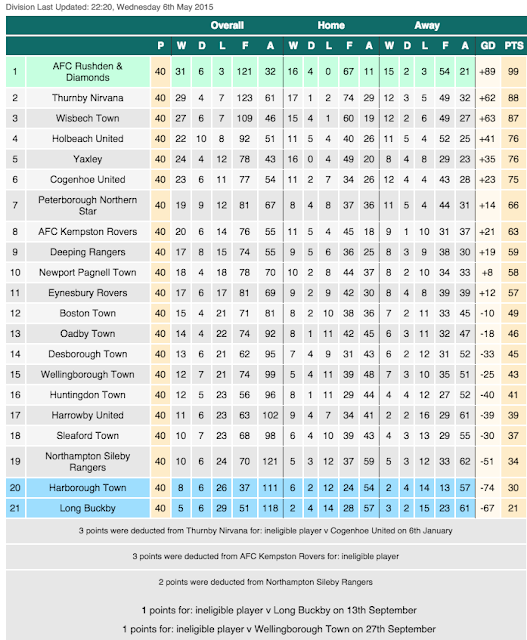 Despite finishing a massive 26 points behind title winners Norwich United, Godmanchester Rovers had enjoyed an excellent season in the Eastern Counties League, sealing runners up spot on the final day. They had already won in this competition in the first round, smashing Huntingdon Town 7-2. They received a bye in the semi final. Even more bizarrely Yaxley had not even had to play a game to get to the final, but they had also enjoyed a good season, finishing 5th in the United Counties Premier. I had seen them as part of the UCL Hop back in August as they defeated league whipping boys Long Buckby 3-1 at Leading Drove. 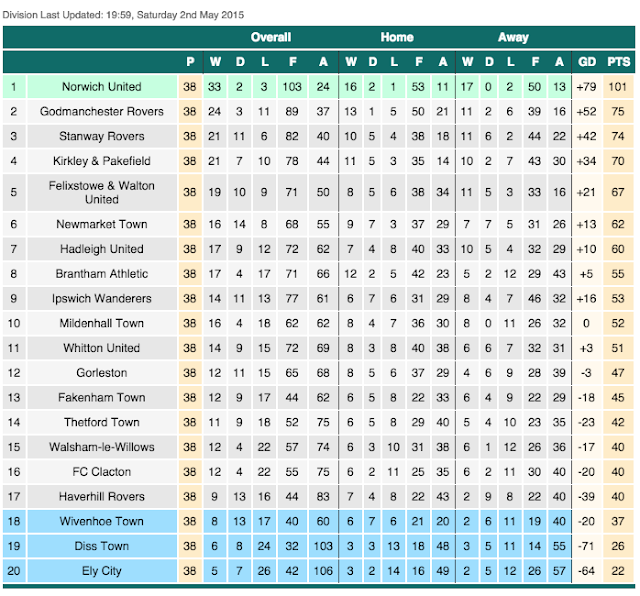 
It was coming to the end of the season, and I was looking to complete as many games as possible before the boring summer break came along. Friday night was as good as any, and with my options scarce, I opted for the Hunts FA Cup Final between Godmanchester Rovers and Yaxley. It was not the most inspiring of venues, but it did at least have a decent choice of pubs, albeit with some of them being over 2 miles walk away, but with me not being bothered about a walk and needing to burn off the cider anyway as I was driving, it seemed as good a reason as any to leave early and avoid the rush hour traffic. A decision would be made on the day, depending on how I felt, but I was going to enjoy it nonetheless. It would be a bit more expensive than usual for fuel - my car was in for repair for a few days after a deer had run into the side of it. I was given a replacement - a huge and uneconomical Vauxhall Mokka, but with the season coming to an end, I was just going to have to bear the cost. On the day of the game, I was at work as per usual. Luckily it was a middling day in terms of business and so I was out and home before 1. That meant I had a couple of hours to spare and I spent it having a bath, having lunch and doing various other bits. I left around 10 minutes later than I'd have liked and although there were not any major traffic jams, there were the usual dawdlers who put 20 minutes on my journey. I was at Huntingdon Town FC at 5.15 which was the time I hoped to be in the pub by. I got myself in gear and with half jogging and half walking, I halved my journey, getting to the pub at 5.35. 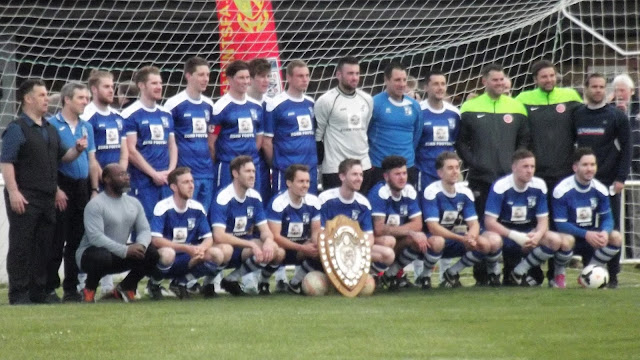 After 2 and a half miles through parks, I was looking forward to having something nice. The Falcon came up trumps with about 10 ciders, and short of doing food, it was perfect. First up was a half of Lilley's Lemon and lime cider, which was very refreshing and a great one to have with me driving later, with it only being 4%. For my second, it was a pint of an old favourite, Gwynt y Ddraig Fiery Fox. Anything from my favourite brewery I will not complain about having again. That was my lot for the night and so I went in search of food. There was not much choice and I ended up going to a place called Bunters as I couldn't see much else. The Chicken wrap meal deal at £3.80 sounded good in essence, but it wasn't on reality. The only drink was coke (which I don't like) and they ended up ruining my chicken wrap by putting mayo on it without consulting me. I ended up picking the Chicken out and binning the rest. It was then a slightly slower walk back to the ground with me being fuller and checking Facebook on the way back. I got back to the ground at 7.15, paying an above average £8 for entry, though it did at least include a programme. I was trialling filming the game on my new camera, picked up for the princely sum of £25 off of eBay in the week. I don't think I will be doing every game but may stick to the FA Cup ones that I go to. The whole operation was very amateur but I did at least capture all 3 goals.  It was a convincing victory for Godmanchester Rovers as they easily beat Yaxley, with a Tom Meecham hat trick doing the damage. The video is below. After the game I watched the trophy being presented before leaving at 10. It was a much quicker journey home and I was back home by 11.15. I went on the internet for a bit and was wide awake, despite getting up at 4am after only a few hours sleep last night. I must have been up until about 3am, passing the time watching TV and stuff on Youtube.

JUBILEE PARK is a basic but well-kept venue which is around a couple of miles out of town. All the covered accommodation is on one side and is of the metal prefabricated variety. Just under 100 seats are supplemented by around the same in terracing. The ground has an official capacity of 1000, but could probably take more if needed. The town is walkable if you have a good pair of legs - if not, there's not much near the ground but there is a bar and food on site. 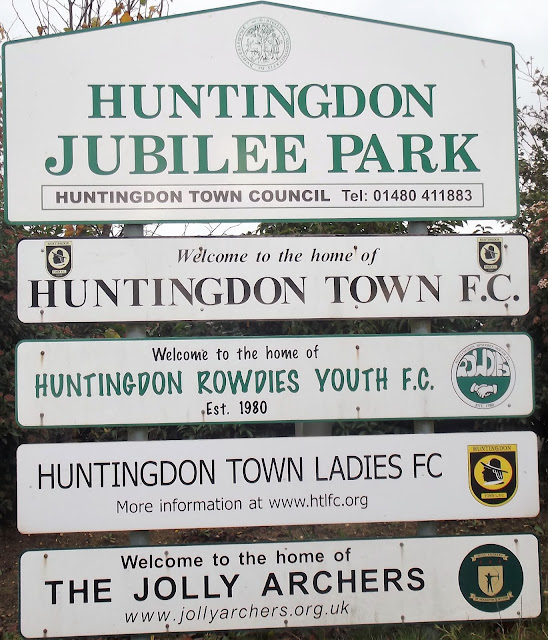 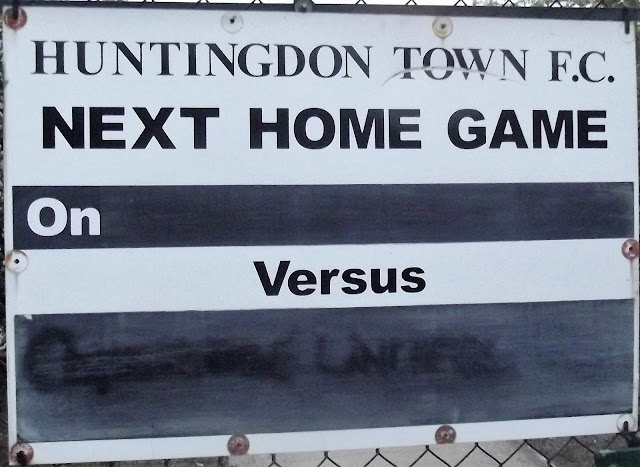 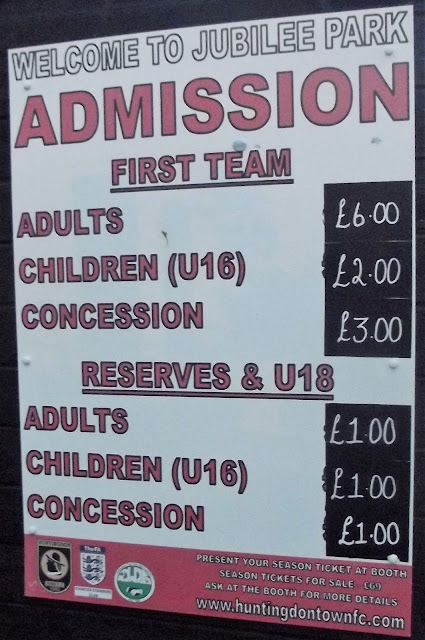 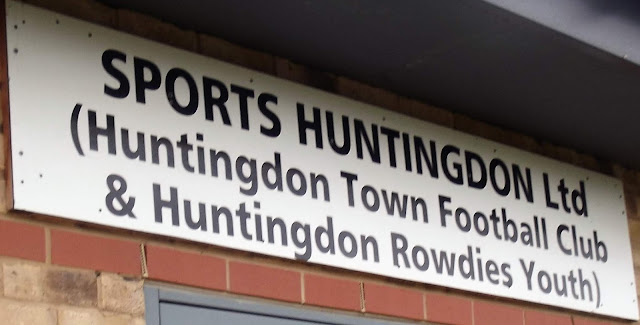 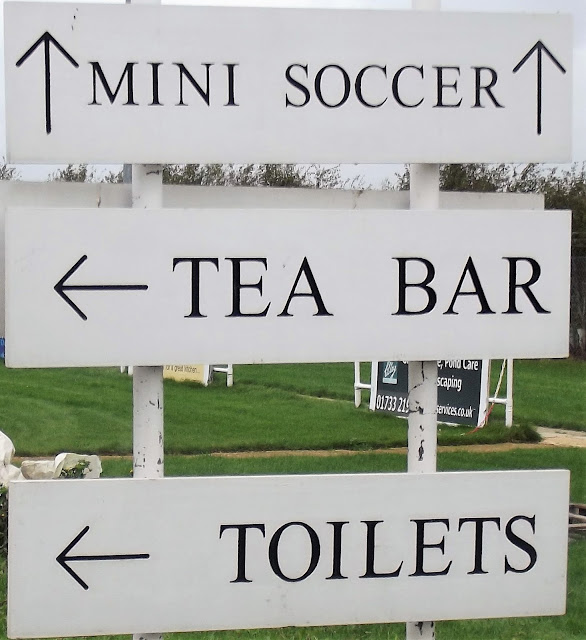 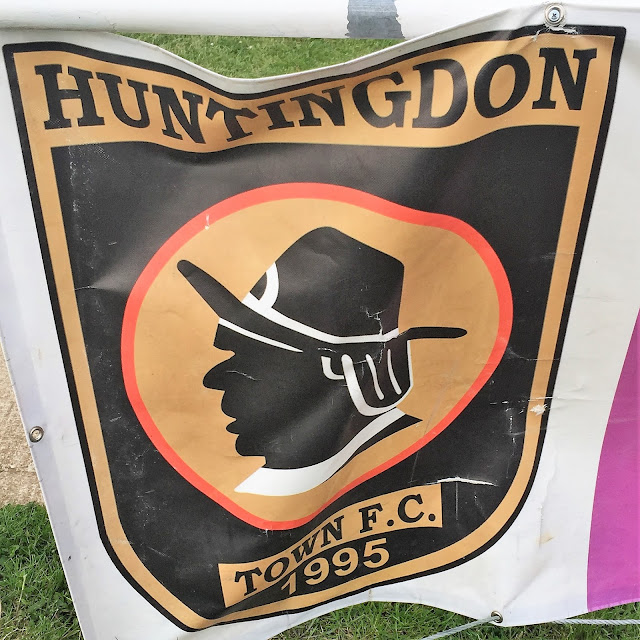 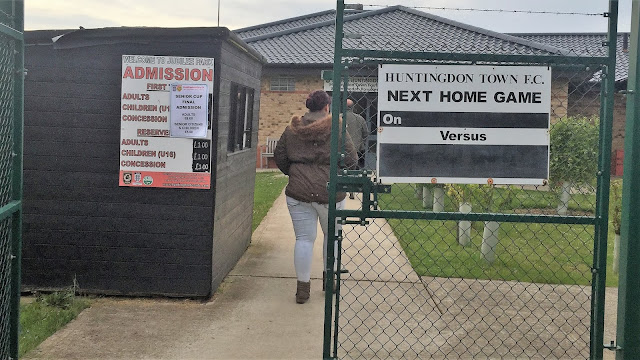 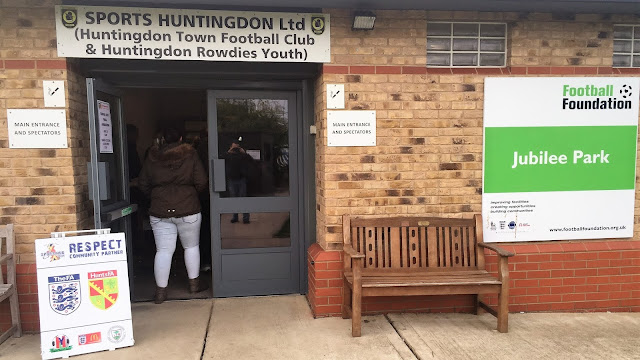 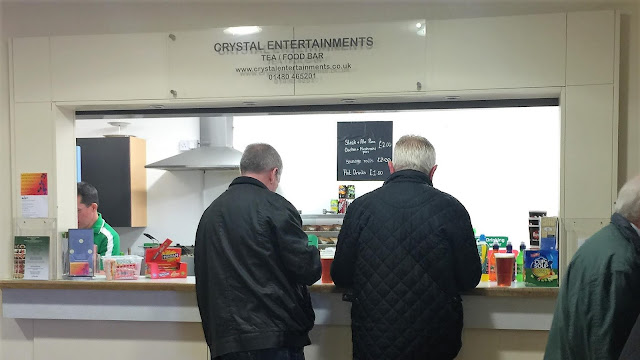 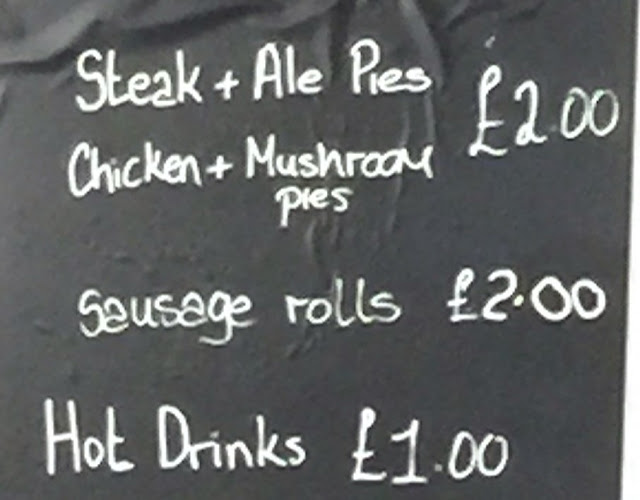 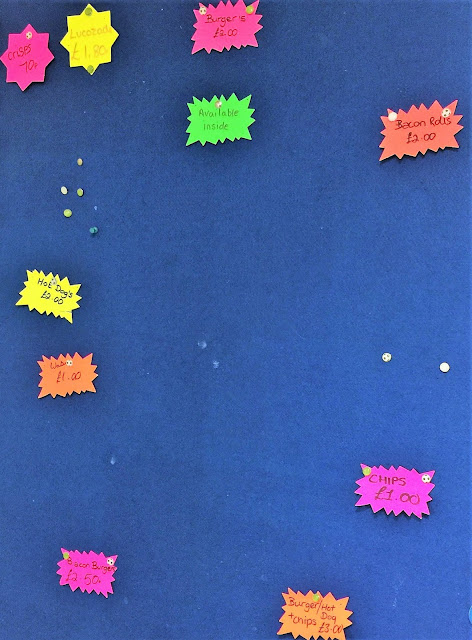 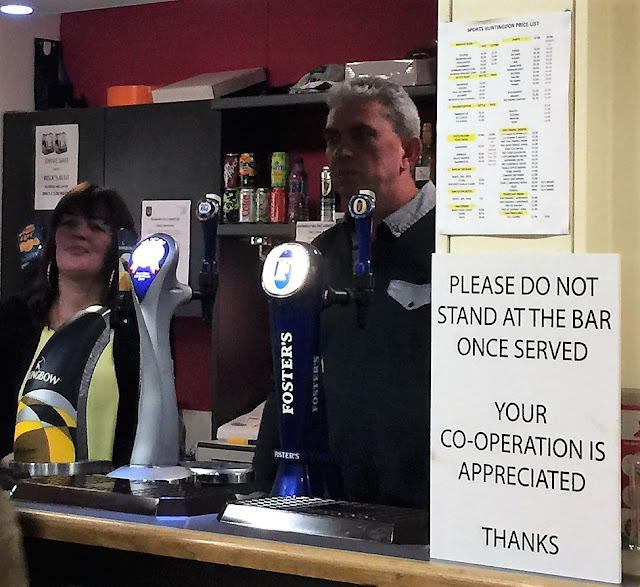 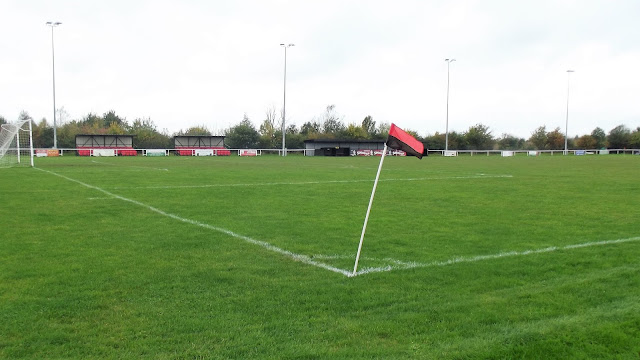 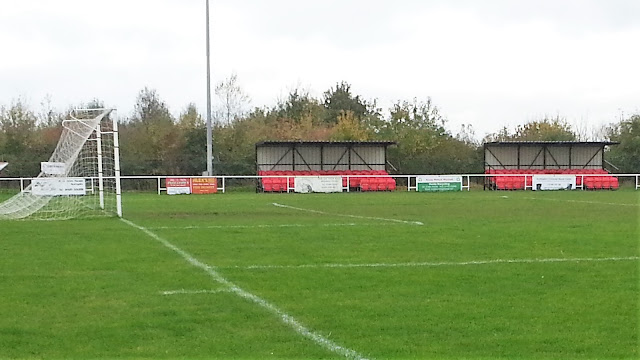 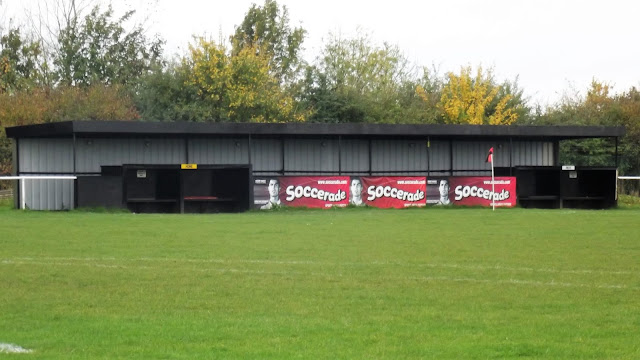 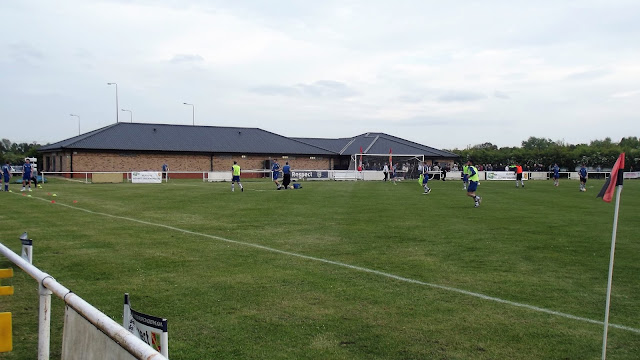 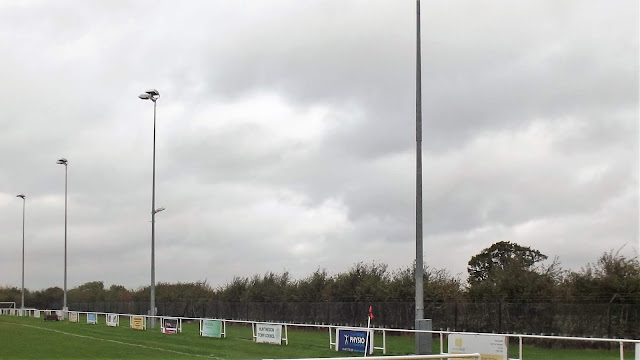 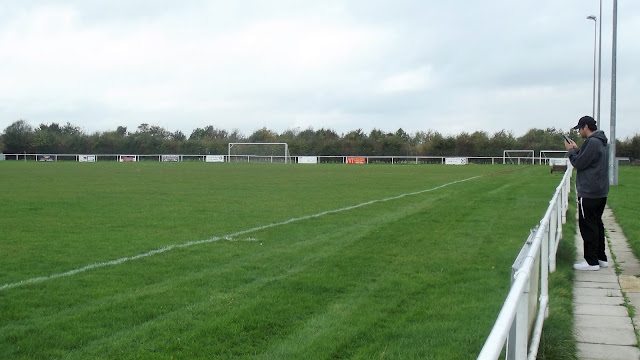