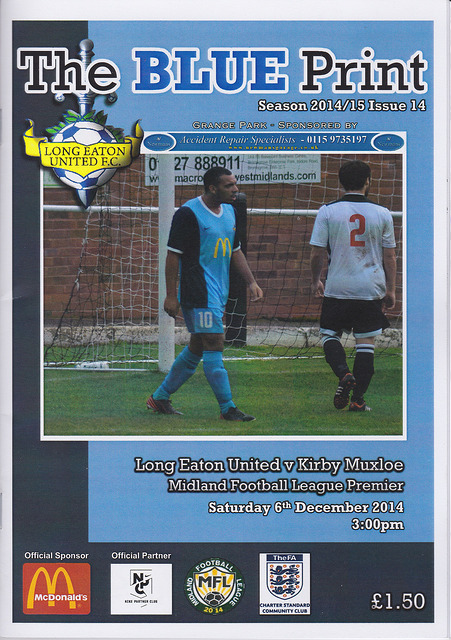 LONG EATON UNITED FC was formed in 1956 and started off in the Midland League. They stayed there until they became founder members of the Northern Counties League East in 1982 where they stayed until 1989, joining the Central Midlands League. They rejoined the NCEL in 2002 initially at Division 1 level, but they won promotion to the Premier within a couple of seasons. They had their best ever league finish when they grabbed the runners-up spot. At the start of this season, they transferred over to the Midland League due to geographical reorganisation and were making a good fist of it, battling out for top spot with local rivals Basford United. Should they win this battle it would be only the second league championship in their history, and from what I saw of the ground when I stopped for pictures on the way to another game, they have everything in place to make the step up to the next level.

The club has reached the FA Cup 3rd Qualifying Round on a few occasions, though not for a long while. The FA Vase has provided moderate success with the 3rd Round last being reached in 2012. They have also won the NCEL League Cup and Derbyshire Senior Cup, to add to their NCEL Division 1 South title from 1985. 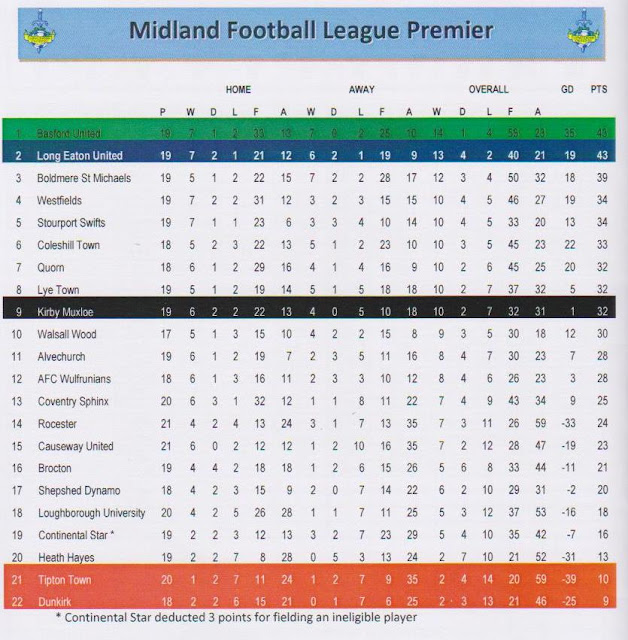 Like last Saturday I was dropping Anwar and some others off at a football league ground. Ideally, I wanted to do an FA Vase game as I had been to every round so far this season. However there was no viable way of getting both boxes ticked, so instead, I started looking to see what was near Nottingham Forest, the nearest Football League one that he needed to do. I was pleased to see that there was a decent amount of options. Rainworth Miners Welfare v Coalville Town was one of the final 2 options but I plumped for Long Eaton United v Kirby Muxloe in the Midland Football League Premier Division, the same league that I had watched Coventry Sphinx in last week. Long Eaton had been on my target list for a while now, partly thanks to their spell in the Northern Counties East League (my favourite step 5 league) but mainly due to the town which had a number of decent pubs, shops and other places to spend time before the game. 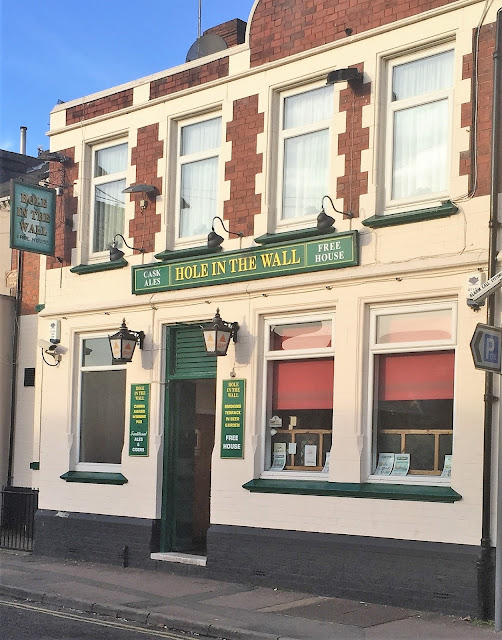 I woke up quite early on the day and so watched TV, went online and had a bath until I left at 10am. I met Anwar and his daughter Aisha at 10.30 and soon we were on our way. It was actually a decent journey for once apart from the roadworks on the M1 and we were at Nottingham Forest by 12.30. The 8 miles to Long Eaton was a bit slower and took 40 minutes, what with having to keep stopping for traffic lights all the time. By 1.10 I was parked up at Long Eaton United and as I was hungry I headed to the local Wetherspoons where I had a double BBQ Hog burger and all the trimmings, along with a pint of Thatchers Gold for little over £8. The burger was huge and I needed another pint to soak it up, so I went to the Hole In The Wall pub for a pint of Scrummage cider before going back to the ground. I was disappointed that the Wetherspoons only did Thatchers Gold, which although nice, is what I have every single week at Wycombe. The Scrummage was a lot nicer, and to make things even better, there was a nice friendly dog in the pub. 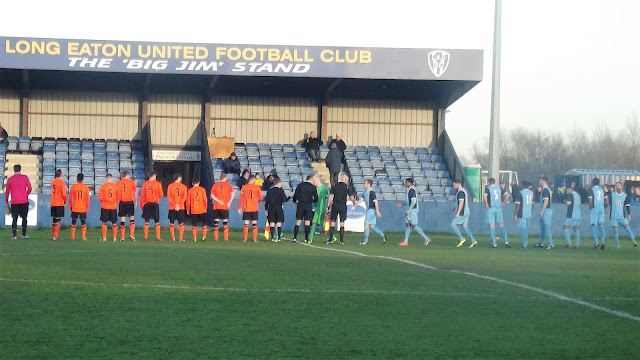 I started my walk back to the ground at 2.25, getting my bag out of the car on the way. I was in by 2.40, paying £5 for entry and £1.50 for a programme. I went around taking pictures of the ground and chose to sit on the far side first half, as the sun was in my eyes in the big stand. At halftime I went into the bar to keep warm and check the halftime scores, I was shocked to see that Arsenal were 3-0 down at Stoke. But with no Wycombe game until tomorrow and very few interesting cup ties, there wasn't much I cared about. Long Eaton completely dominated the first half of the game, but it was the Kirby Muxloe that went into the halftime break ahead after a mix up on the halfway line allowed them to score a breakaway goal. The home side soon equalised in the second half with a shot from just inside the area that flew in. It looked like it wasn't going to be their day as they lost their keeper to injury on 55 minutes, meaning a striker had to go in goal. Then Kirby Muxloe were awarded a penalty, but they missed, putting it wide. Long Eaton got the late winner a few minutes from time. This sent them to the summit of the table, as the leaders before the game on goal difference, Basford United, had no game today.

After the game, I drove straight over to Nottingham Forest to pick up Anwar and his daughter Aisha. They had had an enjoyable day at the City Ground as the home side drew 1-1 with Charlton. It only took 25 minutes to get there this time as the traffic was not as bad, meaning I got there at 5.30. The City of Nottingham appeared to have monopolised the traffic come judging by my experience, there was millions of the bleeders, and it wasn't exactly easy on the eye. The journey was not bad, once we had got out of Nottingham we made swift progress with me dropping Anwar off in Aylesbury at 7.50 and getting home myself 20 minutes later. 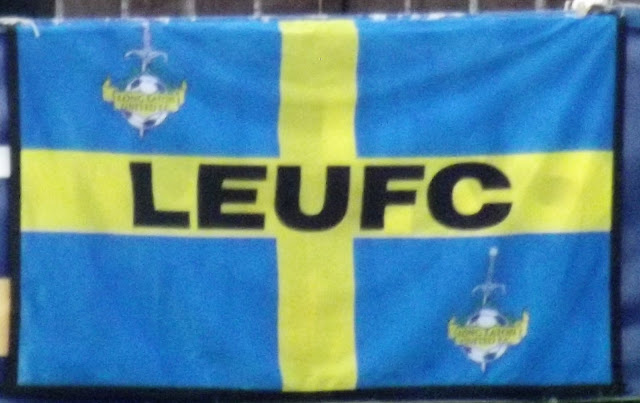 GRANGE PARK is one of the best grounds at step 5 and is probably good enough for step 3. On the side where you come in, there is a decent sized seated stand, holding around 250. Next to that there was an area of cover for around 100. Opposite was another seated stand with space for around 120 people, while the rest of the ground was open hard standing.

I didn't use the tea bar or clubhouse, but they looked to be doing a brisk trade and the clubhouse was smart and modern inside. The town is close by anyway, and I can recommend 'The Hole In The Wall' for drinks. Wetherspoons was decent enough for food, but not as good as some of their other branches for drinks, at least on the cider front. Overall though, a great day out with it being so close to the town and being a great ground for this level. 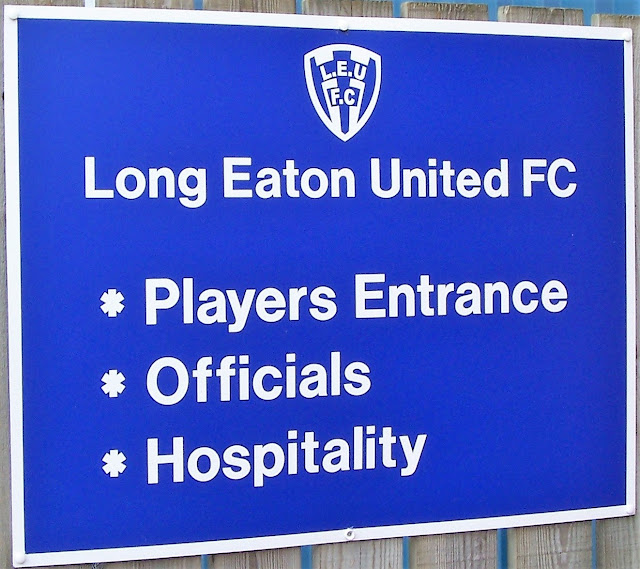 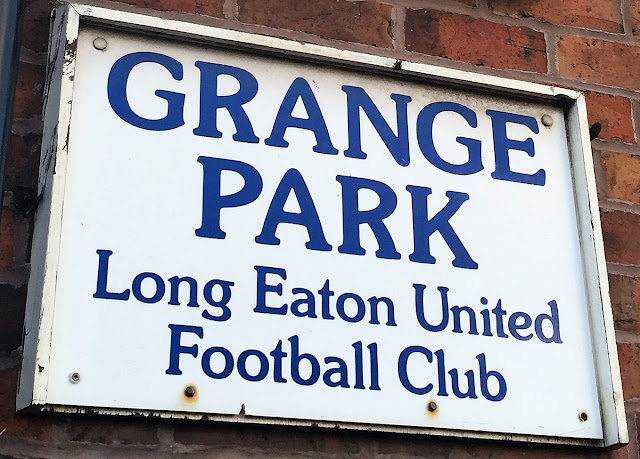 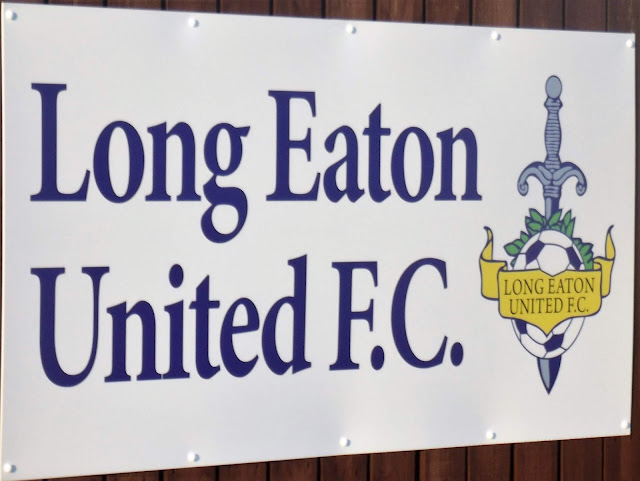 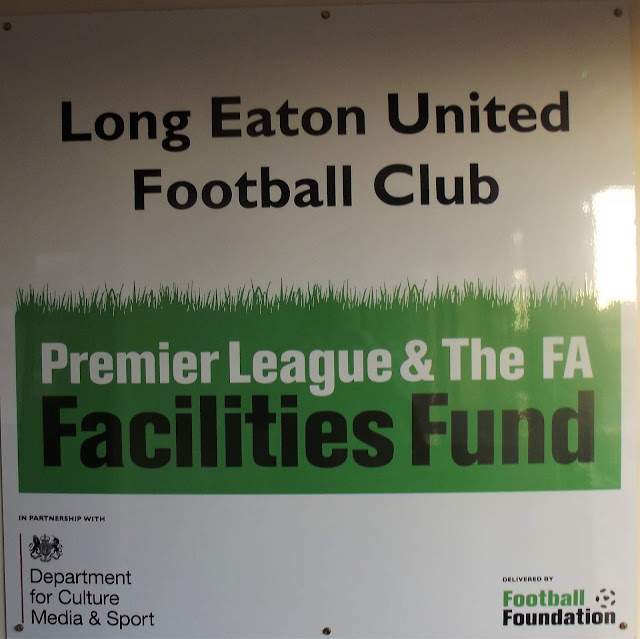 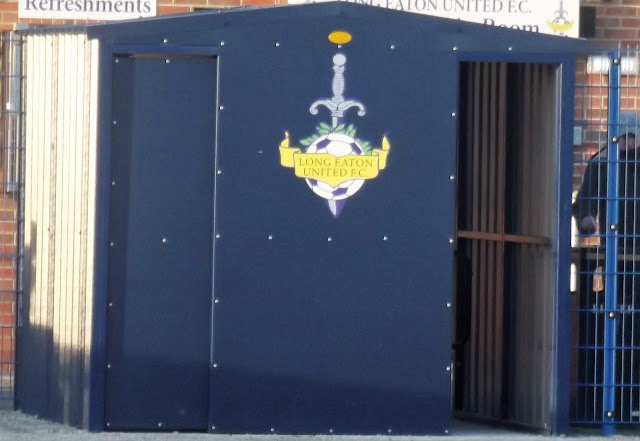 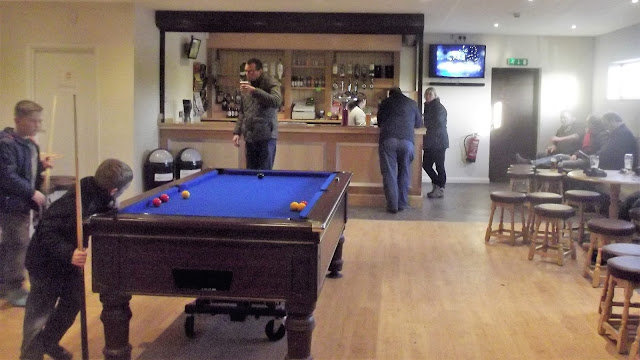 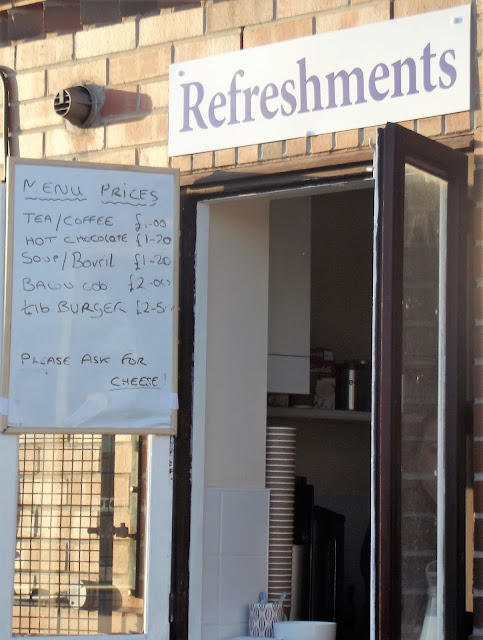 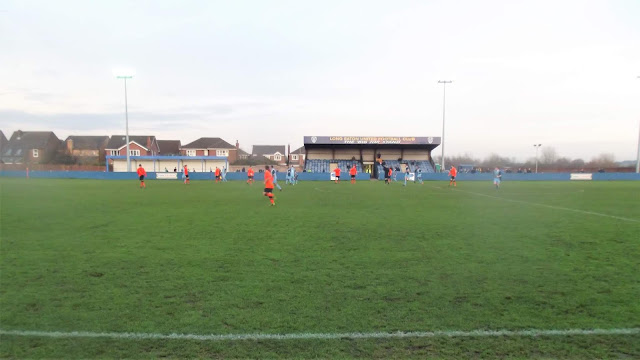 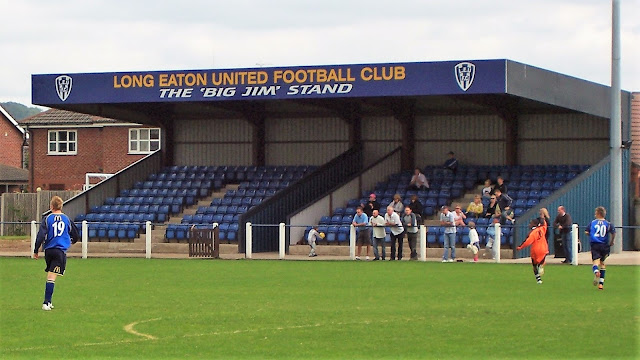 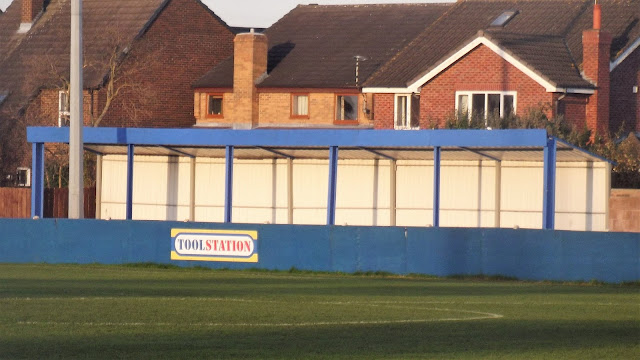 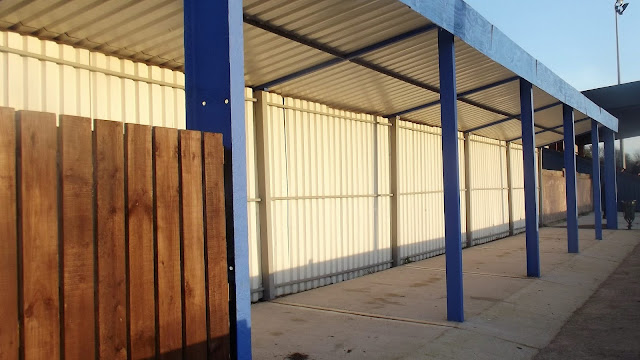 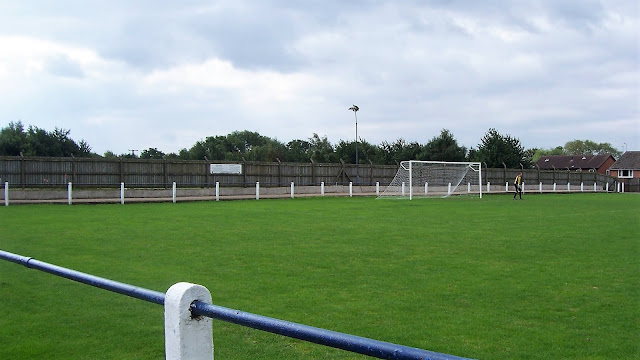 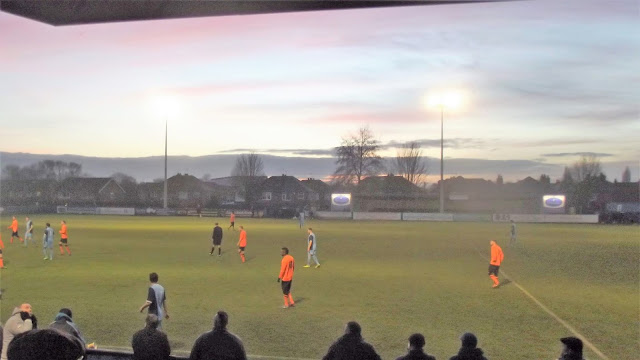 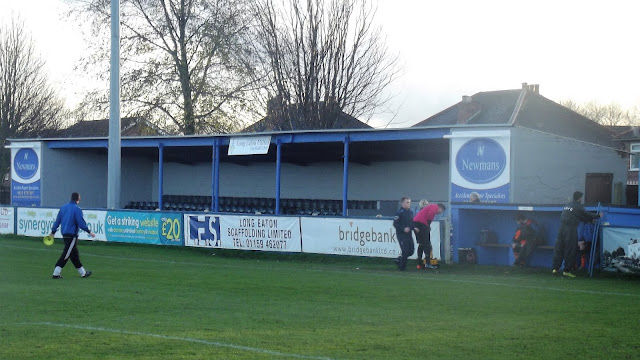 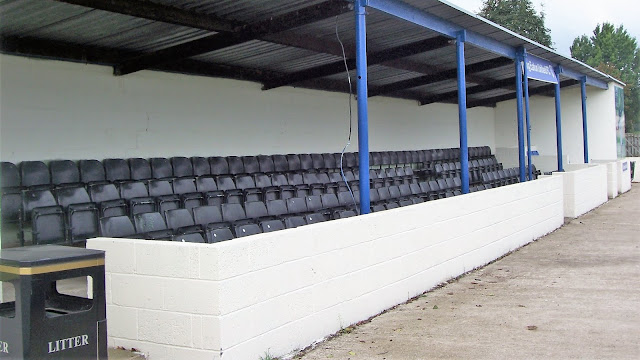 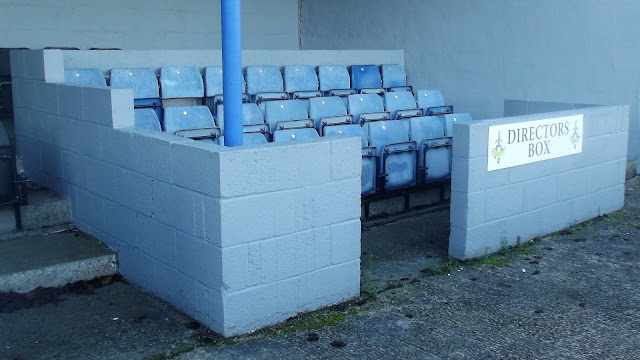 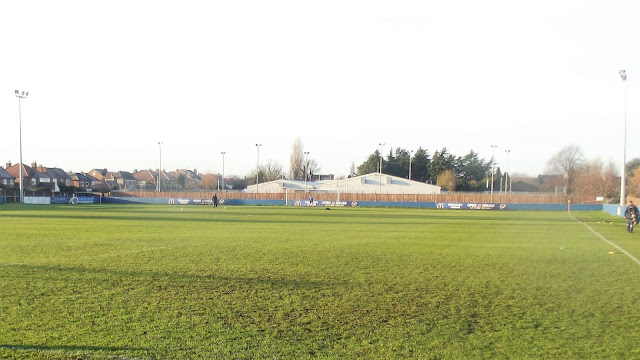 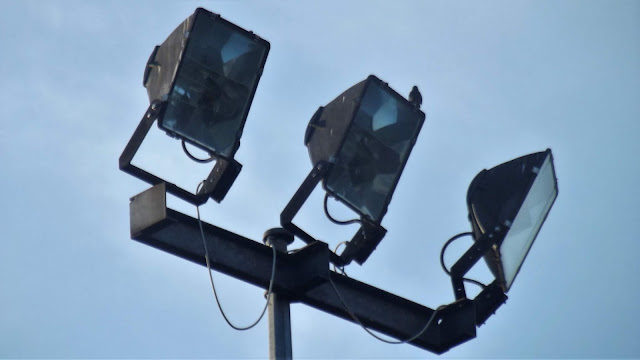