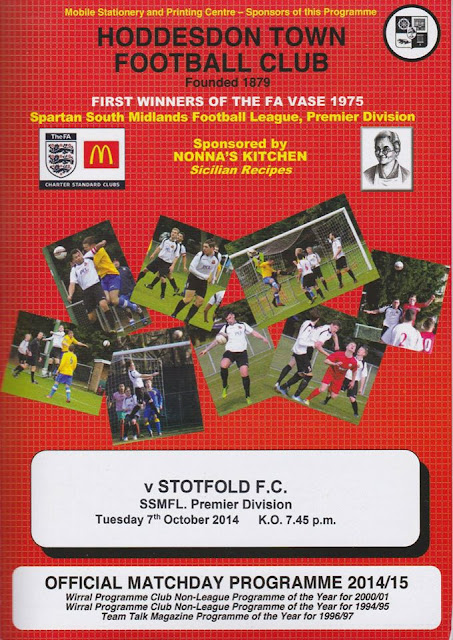 Hoddesdon Town FC was founded in 1879 and as a consequence are the 3rd oldest club in Hertfordshire. They were the first ever winners of the FA Vase when in 1975 they beat Epsom & Ewell in the final at Wembley Stadium. They have reached the 5th Round of that competition since, in 1993 when they lost to Bilston Town, but apart from that have never come close to repeating their feat. They have also not had a good run in the FA Cup for a while, their best ever run coming in 1969 when they lost to Braintree & Crittall Athletic in the 3rd Qualifying Round. They have played in various leagues over the years, joining the South Midlands League in 1984 where they have remained ever since. In 1997 it joined forces with the Spartan League to become the Spartan South Midlands League. They were also in the Spartan League previously and were champions in 1971 during the clubs most successful period. They have mainly been in the Premier Division, but from 2005-2013 they were in Divison 1. Last season was their first season back at the higher level and they did very well, finishing 6th. At the start of play, they were 13th. 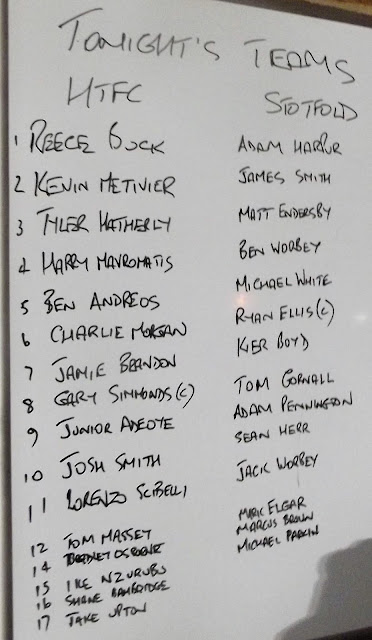 After all the recent long trips, I was looking to stay a bit more local. It was also good to welcome fellow hopper Anwar back to do a game, as it would give me company and also help out with fuel costs. As I was only 3 grounds away from completing the Spartan South Midlands Premier, I decided to try and find something there. The only one of the 3 I required at home was Hoddesdon Town who were playing Stotfold in a league game. Initially, I was going to Hoddesdon Town v Arsenal Veterans the previous Sunday, but a combination of things changed that and I ended up heading north to 1874 Northwich v Wigan Robin Park in the FA Vase. It was my usual Tuesday off on the day of the game and for once I declined to go down town with my Dad. Normally I would get some diet Irn Bru which doesn't normally help me getting to sleep and the chocolate bars that I usually have are not exactly healthy. Besides that, I had Sunday's blog to catch up on, plus I wanted to start tonights one too. It's surprising how long one takes, especially with all the distractions you get looking at club histories and other stuff. I spent the rest of the day on Facebook and planning some future games and had dinner of Roast Pork Shanks in Pepper Sauce before leaving at around 5.15. While I was looking at my records I noticed that the last time I had seen a game on this day, it had been Wycombe's 7-0 defeat to Shrewsbury Town in the Johnstone's Paint Trophy. Oh dear. I left just after 5.20 in the end. Traffic was quite busy and I got to Anwar's just after 5.50. We were soon on our way and got to the ground at 7.10 after a couple of small delays. There was no parking at the ground and so we parked in a nearby side street, before making our way to the ground. 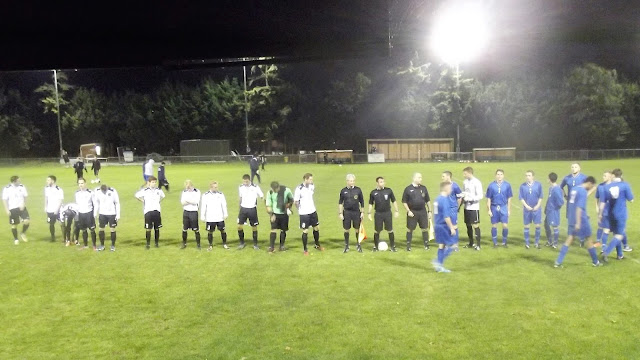 It was £6 entry and £2 for a monster of a programme which will have huge amounts to read. Before the game, I checked Facebook and typed my blog before going around and taking pictures of the ground. They had a good selection of 80s music on the tannoy pre-match. During the game we chatted to a groundhopper who had done over 4200 grounds, which makes my count, a tenth of that, seem rather feeble. It wasn't up to the usual Spartan South Midlands League standard sadly. I have been used to some right end to end encounters with entertainment galore in every game I have seen. This one was a bit limited in goalmouth action. Hoddesdon took the lead with a penalty in the first half but it was Stotfold who edged it. The visitors got their equaliser 5 minutes from time with a diving header and in the end, a draw was a fair result. After the game, it was an easy drive home and we were back in Aylesbury by 10.30. I was back home myself by 10.55. On the way home I was most delighted to hear that AFC Wimbledon had won 3-2 at Milton Keynes. I checked Facebook, typed my blog and watched some YouTube videos before going to bed at around half past midnight. I had to be up at 4am but this was more sleep than I usually get on a Tuesday night.

LOWFIELDS is a smart and tidy setup. Pride of place goes to a neat stand that holds around 150 fans. Opposite is another area of cover, this time standing, holding around the same number. The rest of the ground is open and space is very tight at each end. It is all very well kept though, unlike a lot of grounds at this level. The tea bar and looked above average for this level, though I didn't try anything. The town is close by anyway, should you fancy a wider choice. Pride of place goes to the programme which is huge, more like a book and easily the biggest I have seen, with plenty to read in it. 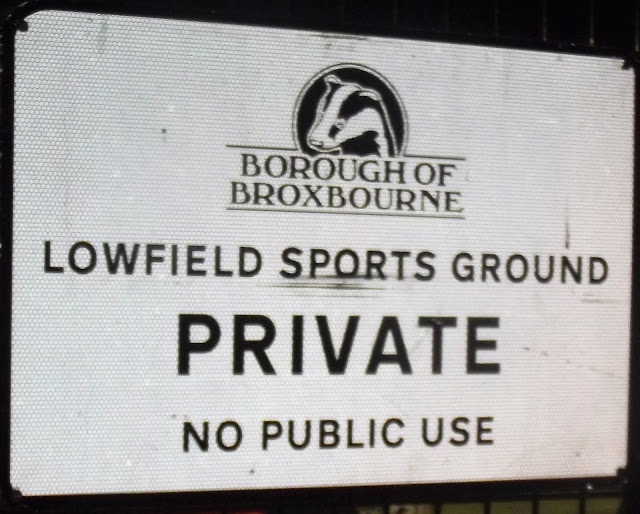 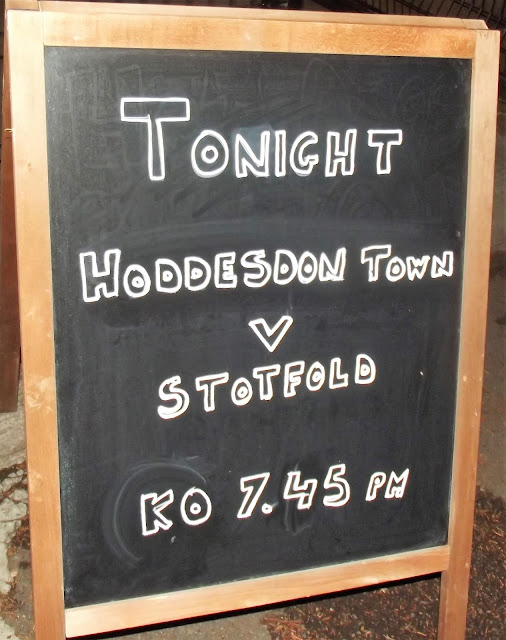 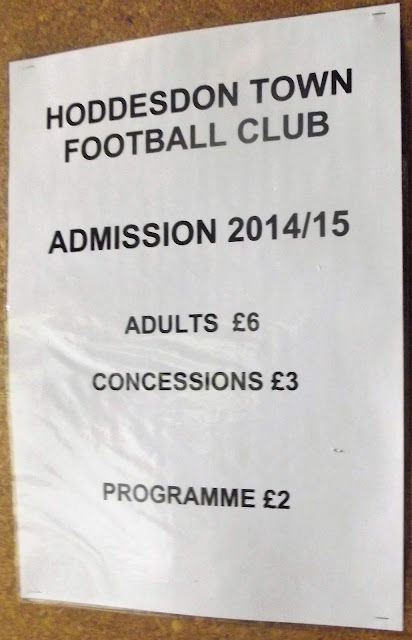 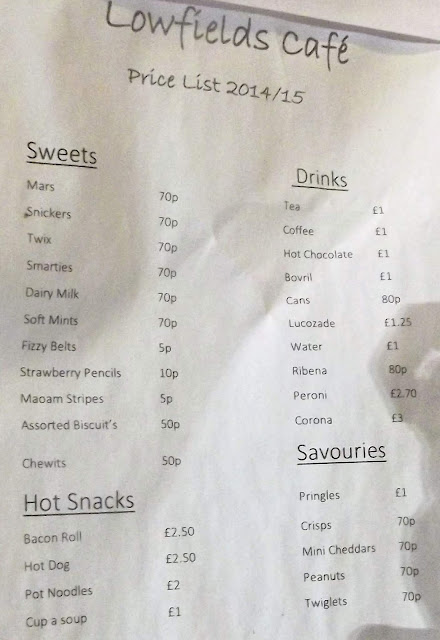 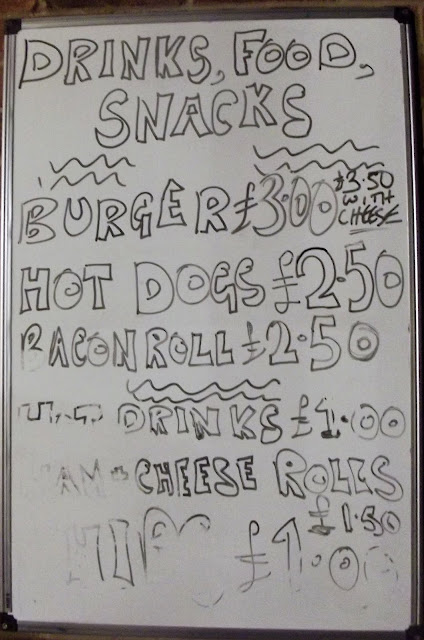 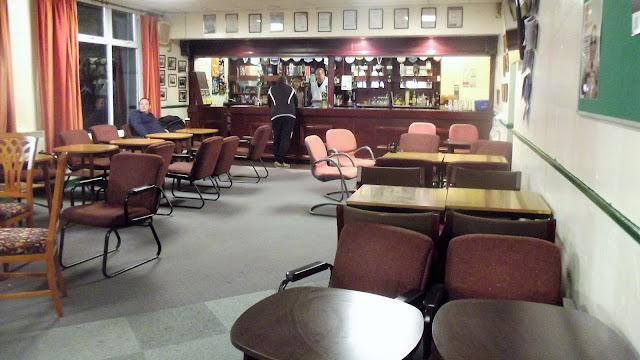 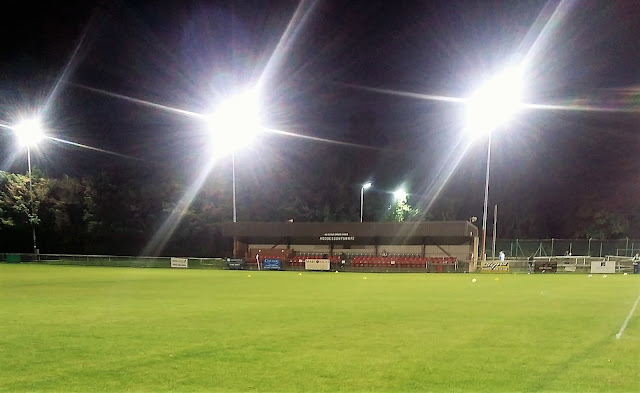 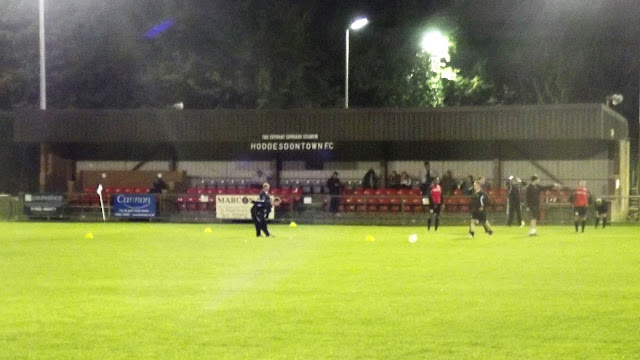 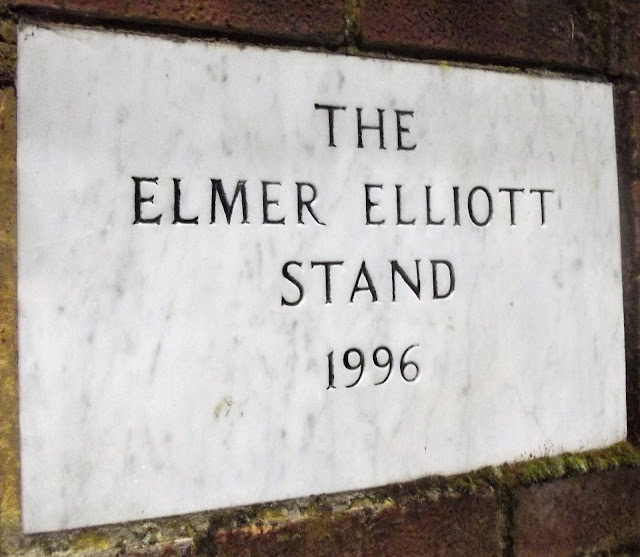 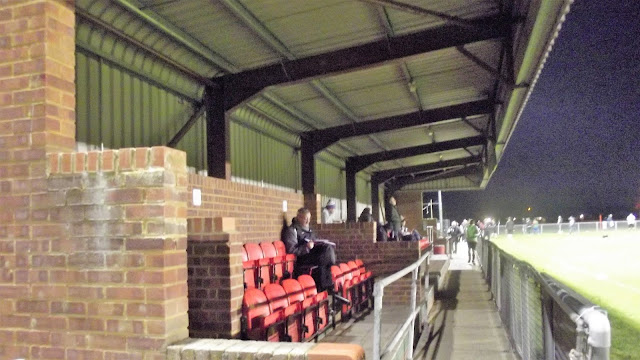 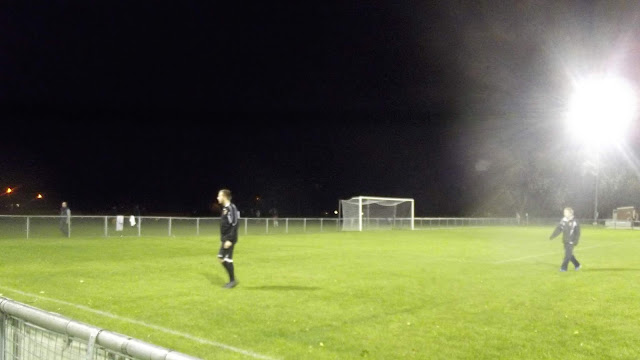 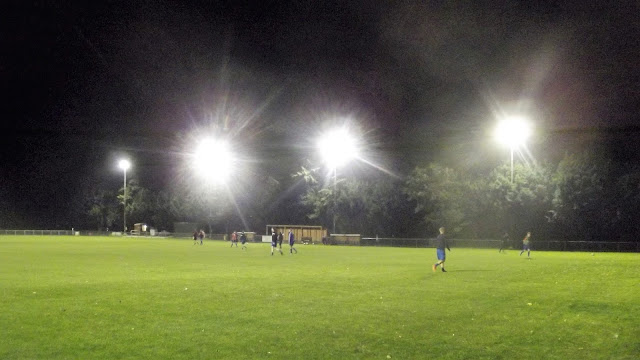 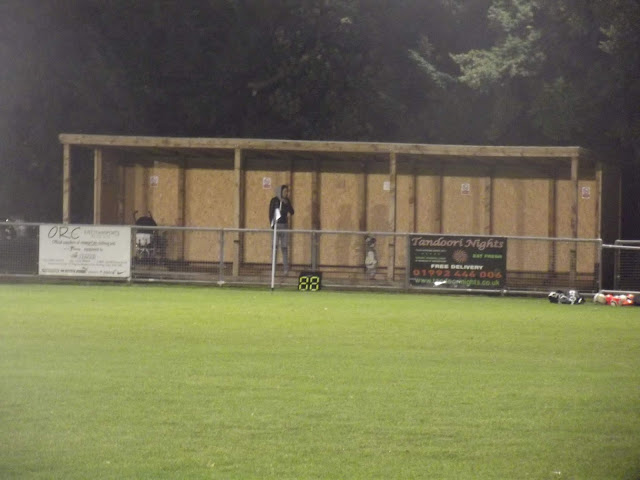 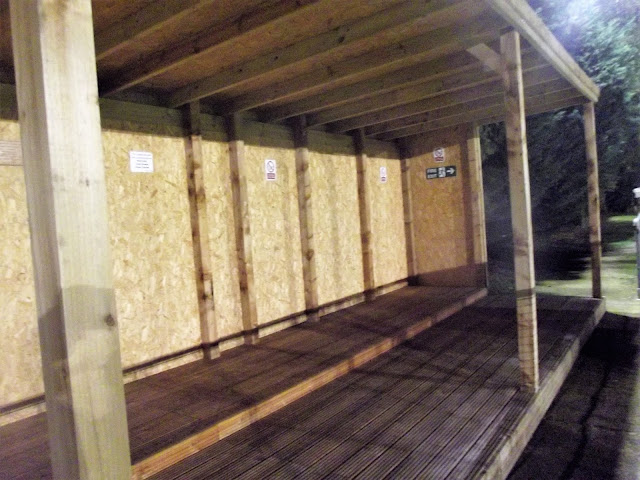 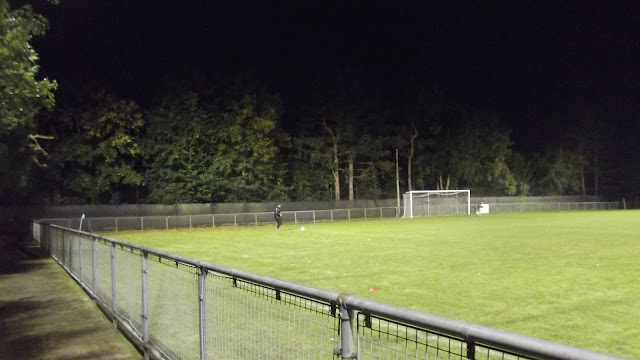 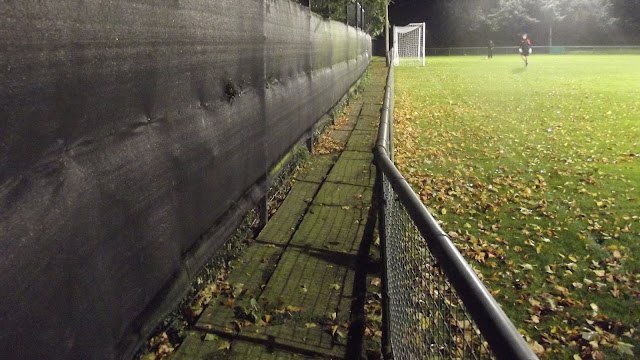