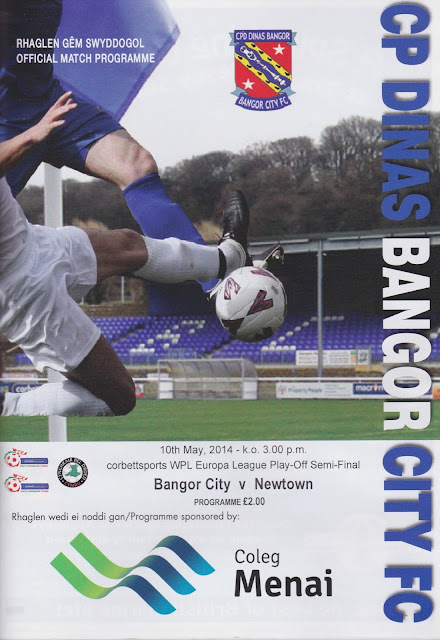 Bangor City FC was formed in 1876. After playing in local Welsh and English Leagues for the first part of their history, the joined the English Northern Premier League in 1968. They were generally very successful in this and this led to them spending 4 seasons in what is now the Conference with their best ever finish coming in their debut season of 1979-80 when they finished in 9th place. Eventually though, they were relegated back to the NPL and that was where they stayed, up until they joined the League Of Wales (later to become the Welsh Premier League) Whilst in the English Leagues they had some good runs in the FA Cup, the best being in 1983-84 when they got to the second round before losing to Blackpool in the 2nd Round.  That season saw them reach the final of the FA Trophy where they lost in a replay to Northwich Victoria. In Wales, they have won the Welsh Premier League 3 times and the Welsh FA Cup 8 times (though 3 of those victories came whilst still in the English Leagues. Like most Welsh clubs, Europe has proved tough for them, but there have been some high points. In 1962 they drew over 2 legs to Italian giants Napoli but lost out in a replay played at Arsenal's Highbury stadium. In 1985 they beat Norwegian side Fredrikstad on the away goals rule before going on to lose 3-0 to Atletico Madrid over 2 legs. Since being in the Welsh Leagues their only victory came when they beat Finnish side Honka 3-2 over 2 legs in 2010 which was a sweet victory as they lost to them the season before. They went on to play Maritimo of Portugal, losing 10-3 on aggregate. 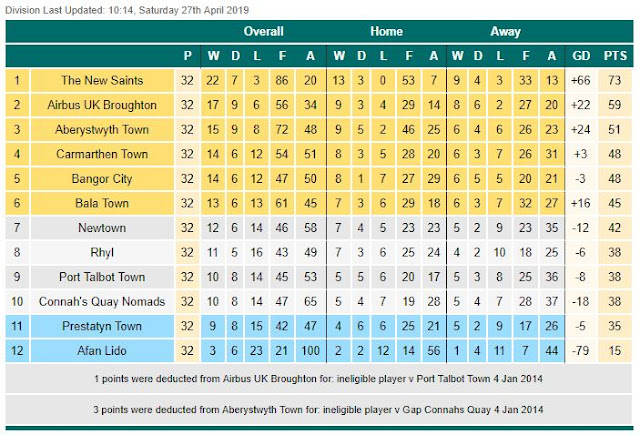 
The end of the season was fast approaching and I was looking for games to go to. Pretty much all of step 1-6 in English Non-League Football had packed up, bar the odd cup final. So I started looking further afield. Last season my final game of the season was the Welsh Premier League promotion playoff between Port Talbot Town and Bala Town. Anwar my usual travelling companion and I had a great time, so as soon as these fixtures were announced in January and they were after the normal English season had ended, we made formative plans to go to them again. One big bonus was that I could stock up with my favourite Welsh Cider 'Gwynt y Ddraig' which is virtually impossible to get in the shops in England. You are even doing well if you can get it in the pub and I knew for a fact you could get it in Wetherspoons near their ground which would go down nicely with my lunch. Initially I had been planning on going to Carmarthen Town on this day, however, due to some unknown reason, they moved it over to Port Talbot, which obviously I had already done. It was only by pure chance that Anwar saw it, so although it was probably an extra 150 miles round trip to change the destination, at least it saved a wasted journey. 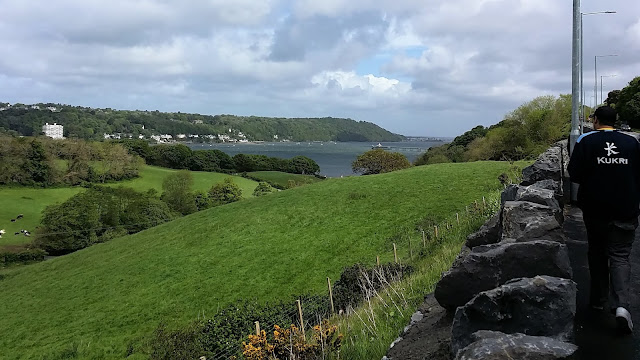 It was an early start for me on Saturday morning, waking up at 7, having a wash and getting dressed before leaving home at 7.30. I picked Anwar up at 8 and although getting out of Aylesbury and onto the. M40 was slow, we made good progress onto the M42 and M6 before getting on the M54 towards Telford. It started off well enough on the A5 but then slowed to a dawdle, as people drove well below the speed limit. It also had lots of bends, which made overtaking difficult. To compensate there was plenty of beautiful scenery. Even if all the Welsh places and signs looked like they had been decided by a drunk bloke picking out random Scrabble tiles. We got to the ground around 12 and walked the 25 minutes into town. First stop was The Black Bull, the Wetherspoons in town. I had Peri Peri Chicken and Chips, plus a pint of Strongbow for £7. I then had a pint of Black Dragon from my favourite Welsh cider maker before heading off to a bakery for pudding and walking back to the ground. We got there about 2 and after paying £8 to get in plus £2 for a bulky programme, I went and had a look at the club shop. There was nothing there I fancied but the bloke in there was really friendly. We learned that the Carmarthen game had been moved as their own ground was susceptible to flooding. I then walked around the ground and got some pictures before taking a seat in the stand for the game. Before it started I went and got some chips and a Bovril from the tea bar. Whilst I was down there I got talking to a Leeds fan who lived in Bangor and who had done the 92 English league grounds including Wycombe. We had a good chat before the game started. 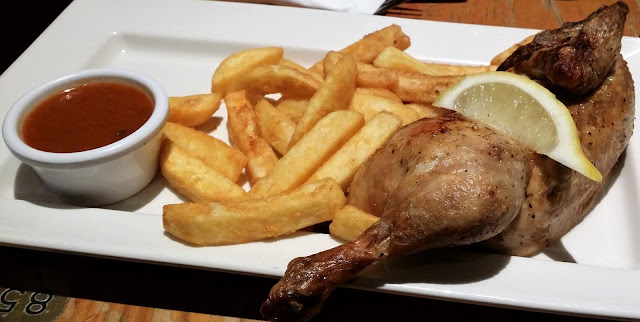 The game started off at a fairly slow pace but with the home side on top. It continued that way until half time but with Newtown having a couple of good chances towards the end of the half. At half time I noticed my feet were damp and decided that I would stop off at Tescos on the way home. I needed some Welsh Cider anyway and my black shoes for work were showing their age so I thought I'd get myself a pair of black trainers or shoes. The teams came out for the second half just after 4pm and I was hoping for a better half than the first. It started off slowly again but on 59 minutes the referee played a good advantage. One striker back-heeled it, played it into the path of his partner who finished well. That was 1-0 to Bangor and they continued to pressurise with them hitting the woodwork and coming close on a few occasions. Newtown had the occasional breakaway but their cause was not helped when they had a player sent off for a second bookable offence on 85 minutes. So that was how it ended with Bangor having home advantage next Saturday against Rhyl. Their fellow north Wales side triumphed at Port Talbot, where Carmarthen had moved their home game to. The winner gains a place in next seasons Europa League qualifiers and is probably worth a 6 figure sum, which is a hell of a lot of money to clubs at this level. After the game, we went to Tesco. I picked up some Welsh cider, though I was disappointed that there was only one box left and I had to dig to the back for that. I also picked up another wonderful Welsh creation from the hot counter. The lamb and mint slice was delicious and perked me up for a journey home. The first part of the journey was a right pain, 60 miles on a single carriageway with some inconsiderate people driving at less than half the limit. There was also practically no radio signal which made it even more boring. It took 1 hour 40 to do the 60 miles. From then on it was a lot better, completing the remaining 160 miles in under 2 and a half hours. I dropped Anwar in Aylesbury at 9.30 before encountering one last Captain Slow on my way home. I got back around 5 minutes later than expected at 10pm and after looking on the internet and watching TV, I went to bed just before midnight. 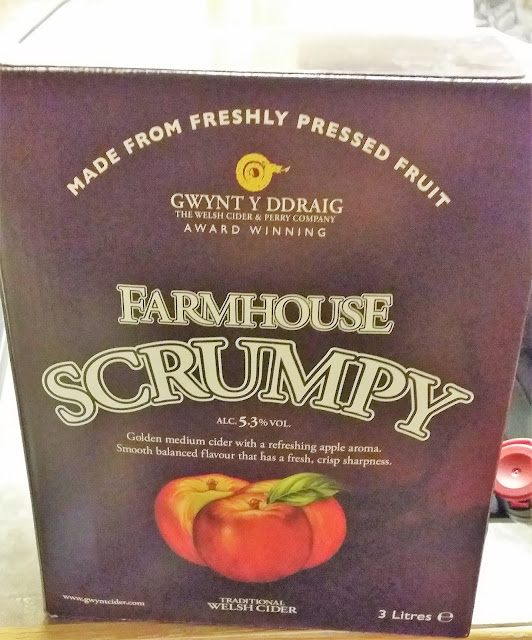 NANTPORTH STADIUM is the newest ground in the Welsh Premier League. To comply with regulations that allow them to host European games they have 1300 seats, the bulk of which are in the excellent main stand. It's elevated so it offers a great view of the action. On the other side, alongside the TV gantry are 2 smaller metal type stands, which are also covered. The rest of the ground is open with a few steps of terracing. Though they were raising funds to build a covered terrace behind one of the goals, which when completed will make the ground better than some in the English Conference. The tea bar was very good, with wallet-friendly prices and good choice. Though I didn't buy anything from the club shop, there was a decent range of items, with old programmes too. I didn't check out the clubhouse. The town is around a 20-minute walk away and offers a wide range of places to eat and drink. 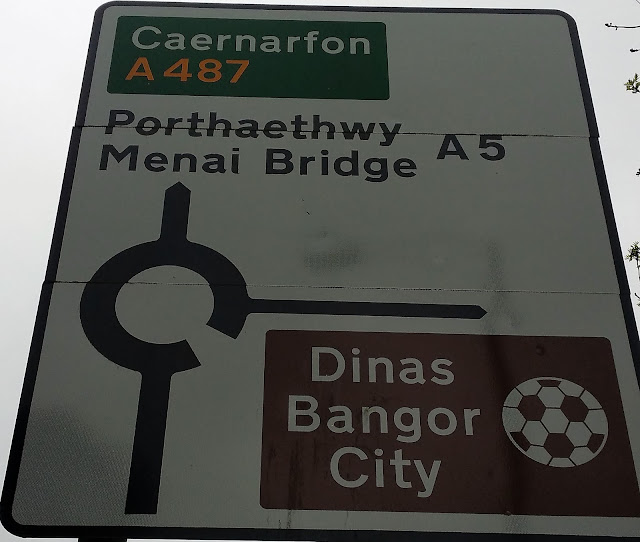 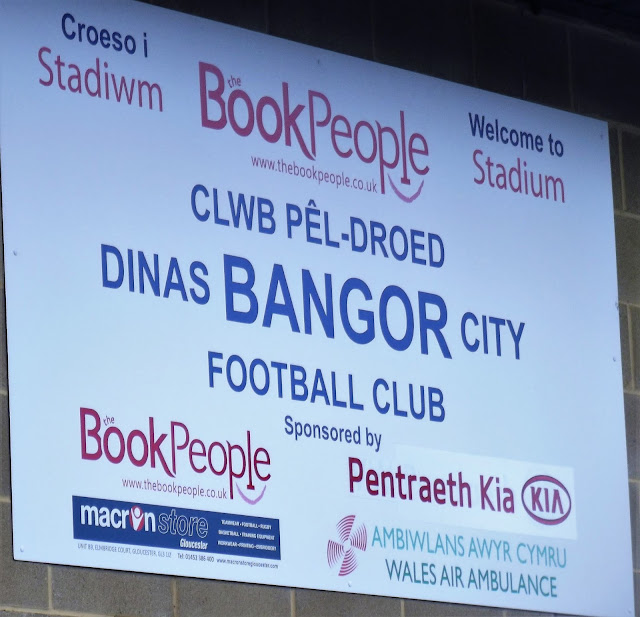 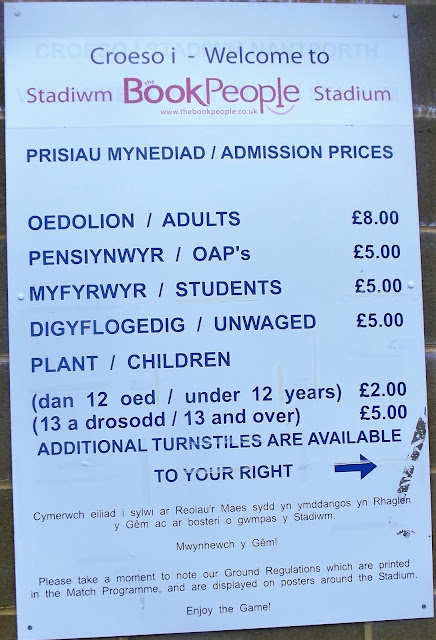 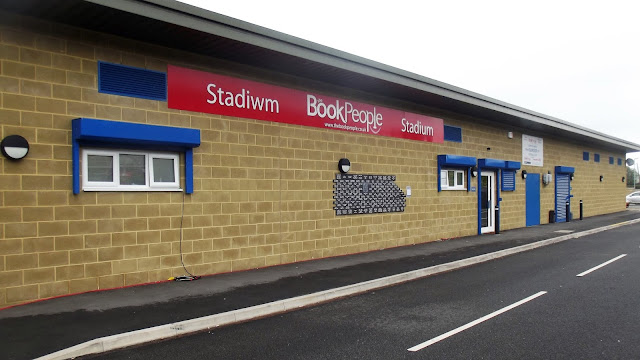 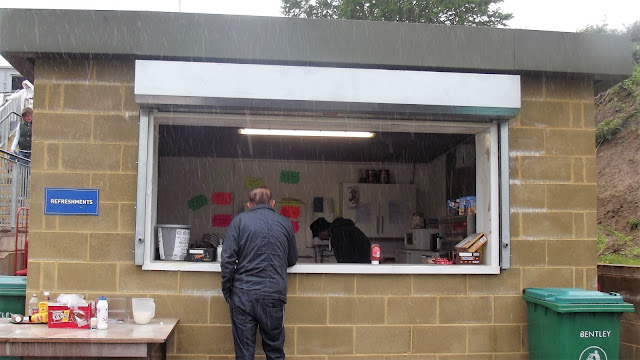 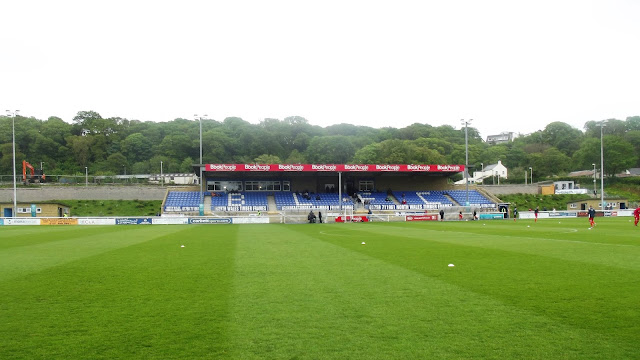 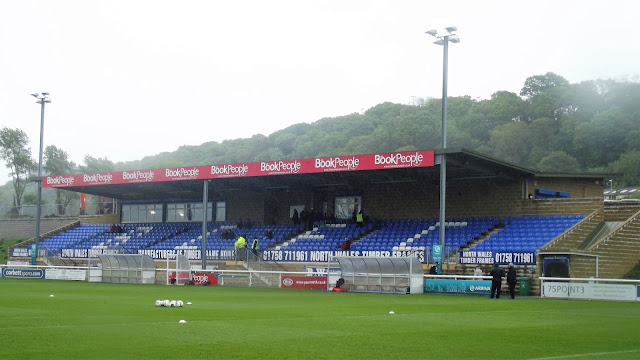 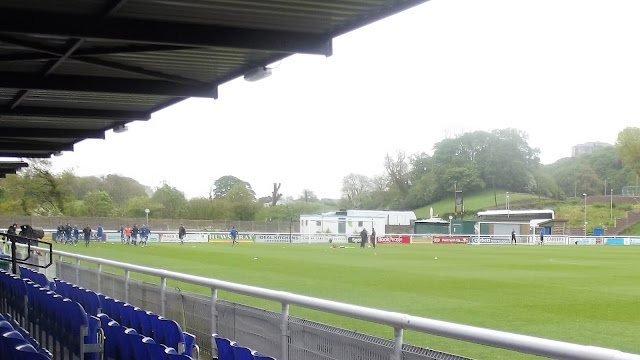 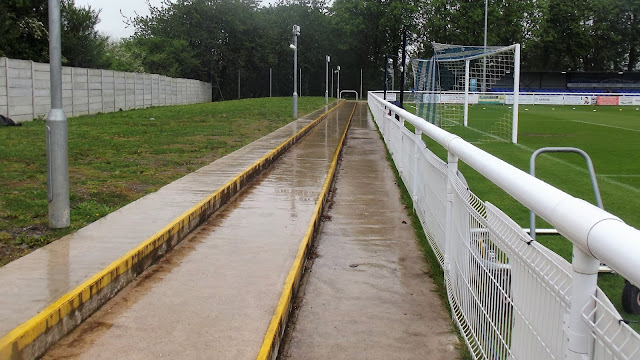 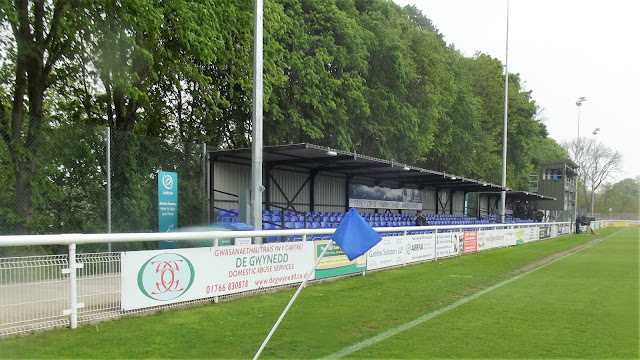 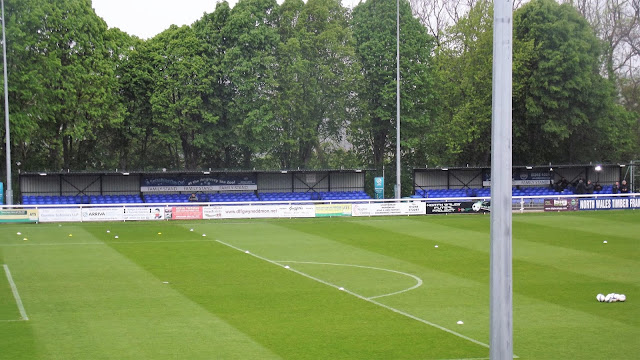 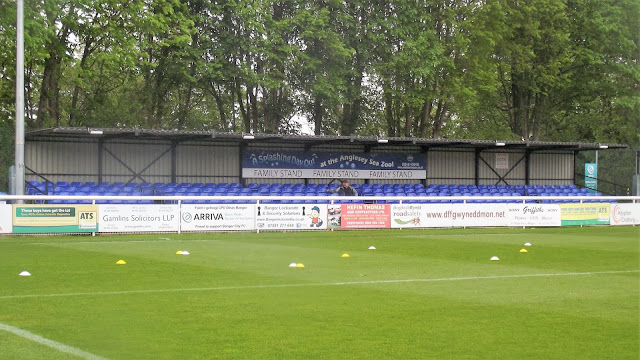 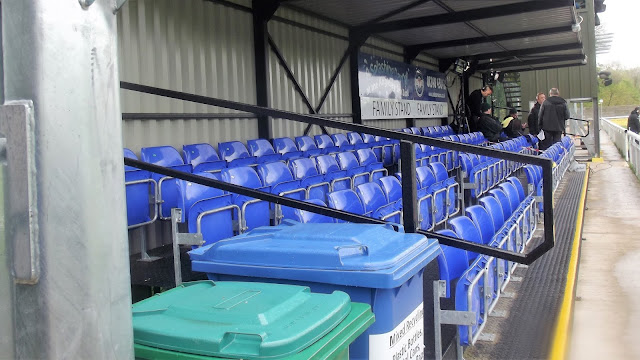 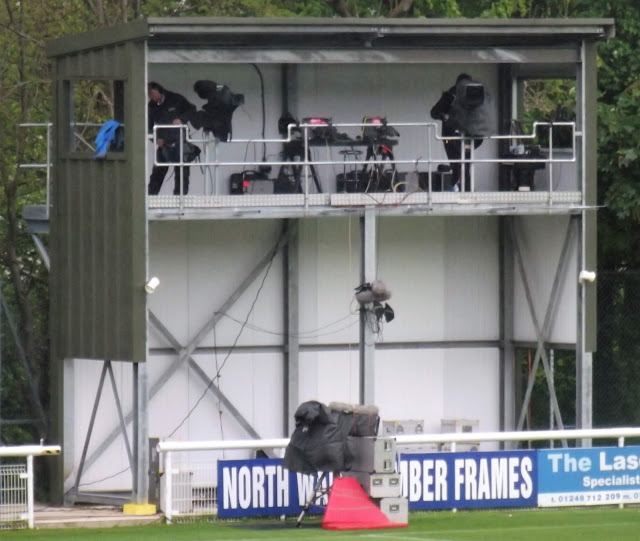 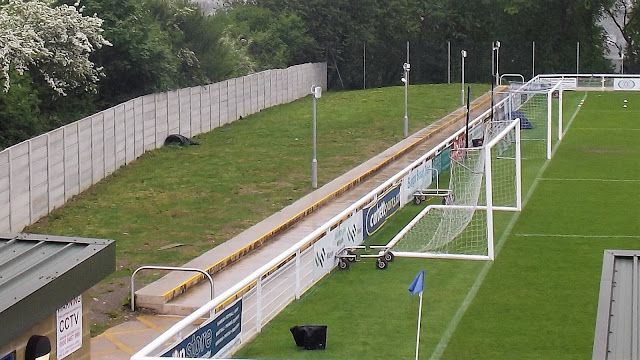