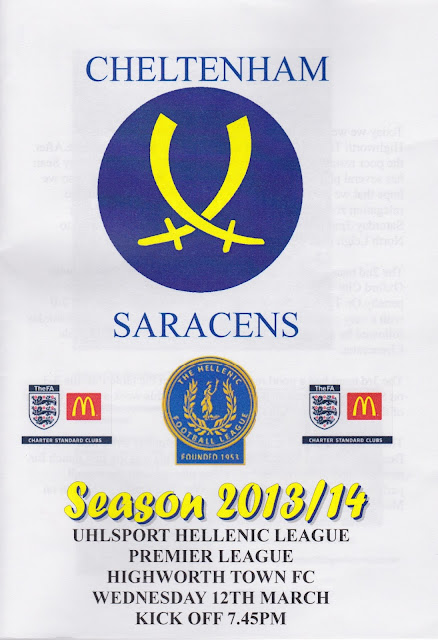 Cheltenham Saracens sounds more like a rugby team than anything else and indeed they are. In fact, the sports club oversee a whole range of sports including football and cricket, covering all age groups. Unlike their more illustrious neighbours Cheltenham Town, the Saracens have not hit any huge heights in their relatively short history, Founded in 1964, they made good progress through the Cheltenham League's 5 divisions, eventually joining the Hellenic League in 1986. They were placed in Division 1, eventually winning promotion in 2000. They only lasted 2 seasons at the higher level before going back down, but they regrouped and rebuilt and came back up in 2011. They finished a very credible 11th last season, well clear of relegation trouble. They entered the FA Cup for the first time this season, beating Slimbridge after a replay. Sadly for them, despite taking fellow Hellenic League side Holyport to a replay in the next round, they ended up losing 7-1. They have only ever reached the 1st round of the FA Vase but they have won a few local cups over the years. They were 15th in the League after the previous Saturday's fixtures and would be hard pushed to improve on last season's placing, but they were at least well clear of relegation. The most famous face to play for the club was Steve Cotterill, the Bristol City manager. I can't find any definite information, but it appears he played for the club as a youngster. 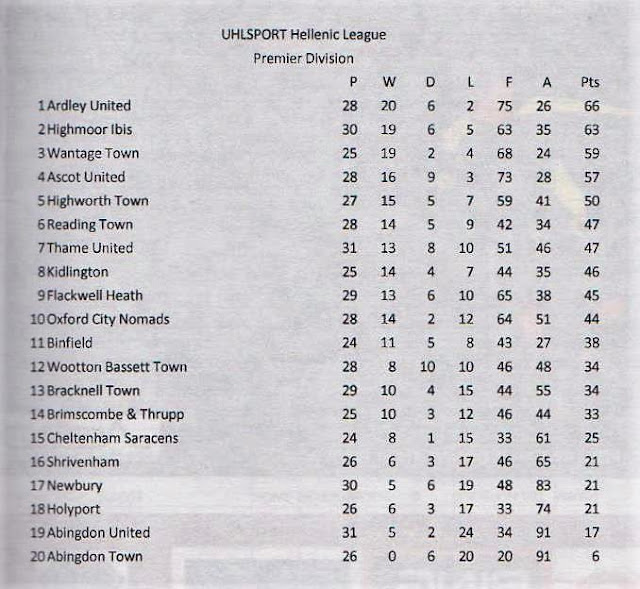 I didn't plan to go to this fixture until a few days before. But then I won an auction on eBay and had to pick up the item from Kidlington. It was a great deal actually. I like my retro games and have the original Xbox already. But I was fed up of going into shops and seeing stacks and stacks of PlayStation 2 games for next to nothing and then the same few xBox games that I already own or don't want. So I remedied that situation on impulse by looking on eBay. I got the PS2 slim version as I don't like too much clutter. I also got in the package: A steering wheel, a memory card, 4 controllers and 28 games for the princely sum of £20. It meant that I would have to drive to Oxfordshire to pick it up but it was a decent deal, and I was hoping to sell a lot of the stuff myself and recoup most of the money back. The trip to Cheltenham would also give me the opportunity to visit an excellent off license in Cheltenham called 'Favourite Beers'. I had been there on my way to a game at Bishops Cleeve last September and had been very impressed with the list of 120 ciders. I always like trying something new and had picked up a decent selection that time but there was still enough to make another visit worthwhile. Apart from a place I went to in Kings Lynn, this was the biggest selection for bottles that I know in the country, so there was already two extra reasons to make the trip worthwhile. And with regards to the shop, there was also another bonus - they said on the website that there is a shop dog, Being a dog lover this would be a nice little bonus as it wasn't there last time. 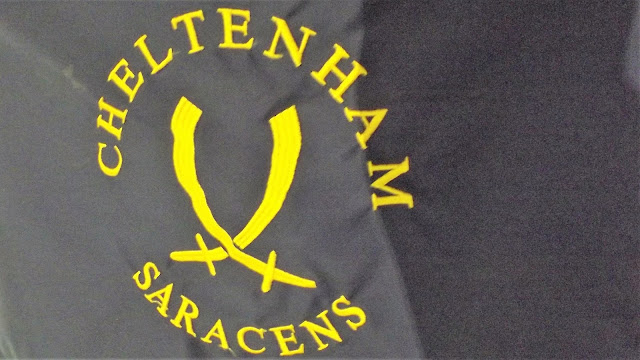 Luckily for me, it was a fairly easy day at work and I was out by 11am. Lately, I had been doing a few hours overtime and fancied a bit of an easy day. It was also nice to go and say goodbye to my Mum and Dad before they left to the airport to go on holiday. I had a dentist appointment too at 2, so I had time to grab a bath before walking up there. I came back home, had lunch and then set off to pick up the PS2 that I had bought on eBay, which was located in a place called Islip, near Kidlington, my destination for my last midweek trip. The area was really nice, right out in the sticks and just the sort of place that I would love to live, albeit in a location more suited to my football trips. The stuff was all in immaculate condition, not like the bashed up games you see in the likes of Cash Converters. I just hoped that it would all work when I got home, though the seller had 100% feedback so there should be no worries there. From then I made my way to Cheltenham, hitting a bit of traffic on the way. I stopped at the excellent off license mentioned above and stocked up on 8 bottles of cider for the weekend that I had not tried before. The place was great, having completely new stock from the last time I visited and I was spoilt for choice. I then tried to go to a nearby pub that I fancied for a swift pint, but the traffic was awful thanks to the Cheltenham Festival so in the end I just headed off to the ground. I got there around 6.45 and feeling a bit peckish walked back to a chip shop called 'Cod Almighty' that I had seen when driving to the ground. The portion of chips was very generous for the £1.40 standard portion and the mind boggles as to how big the large portion is. Anyway, they went down very nicely as I walked back to the ground and so with nothing better to do I went into the ground. Entry was a very reasonable £5 with a free programme which is really decent as most clubs charge £6 then extra for the programme. I certainly think a fiver is a fair price - it saves messing around with coins as well. I spent my time before the match checking out Facebook and typing my blog. I was pretty sure that the same tubby linesman who had officiated at last weeks game at Kidlington was on duty. 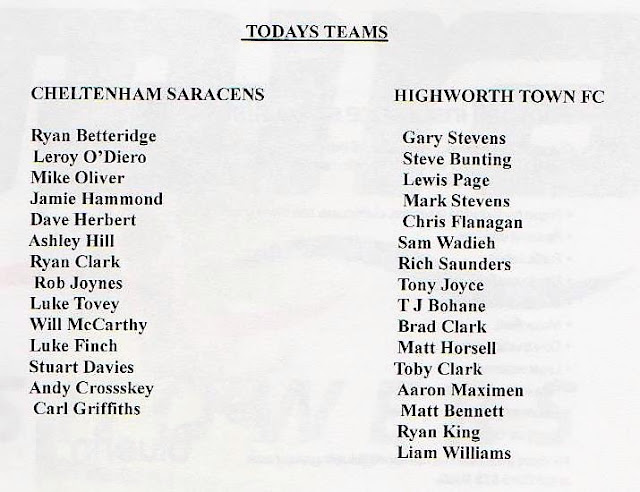 The game started at a frenetic pace and Highworth had good claims for a penalty turned down in the opening minutes. The referee copped some stick from Highworth's number 8 for his perceived dithering. Their number 11 was then booked for a heavy tackle and the referee was getting stick from the crowd for his handling of a tricky game. Then against the run of play, the home side won a free kick. Saracens number 2 looped in a cross-shot and it sailed over the Highworth keepers head who really should have done better. So 20 minutes gone and advantage to the hosts. It was all square on 27 minutes as the visitors continued to have the better of the game and the number 11 finished from close range as he was presented with a good ball into the box. But Highworth went straight up the other end and scored, their number 9 breaking away from the defence and finishing with a low shot into the bottom right-hand corner. Saracens started to come into it more with the goal giving them confidence, but it was Highworth who were the stronger as an entertaining game broke for half time. The second half started a bit slower and there were quite a few niggly fouls as the game failed to live up to the tempo of the first half. Highworth edged a half of few chances and had one cleared off the line towards the end.'Concentration and discipline' the Saracens captain bellowed out with minutes to go as Highworth rallied. The home keeper flapped at a shot but the rebound was screwed wide and then moments later a chance was fired over as it really looked it wasn't going to be their night. The game had been an enjoyable one, Cheltenham Saracens belied their lowly league position but Highworth will feel hard done by. After the game I made my way home, progressing slightly slower than I would have liked due to slow moving lorries. It was also really foggy. But I was back in by 11.10 and had one of my ciders that I had bought. I also tested my PS2 which as promised worked fine. Finally, I watched Coronation Street and a few YouTube videos before going to bed shortly after midnight. 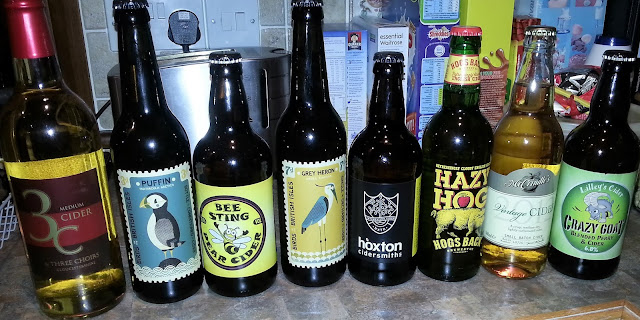 I first visited PETERSFIELD PARK back in September on the way to my game at Bishops Cleeve. I was very impressed with what I saw and the ground looked very good for the Hellenic League level. Though the stands are of the flatpack metal variety, the ground is in a nice leafy location and is all neat and tidy. Though the ground was all prefabricated stands, it did at least have some nice touches. The railings were in the club colours and there were paintings all around the ground that were presumably done by local schoolchildren with art including the badge and the kits. These were 2 seated stands, one along the side and one behind the goal with some additional standing cover in the far corner. A Portakabin served as a tea hut and you could also get a basic range of alcohol there from what I could guess. Food range was basic too, with crisps, sweets and drinks, although to their credit they did do pepper with the Bovril which improves it. There are a few shops nearby including a chippy, so that is the place to go if you are hungry before the game. 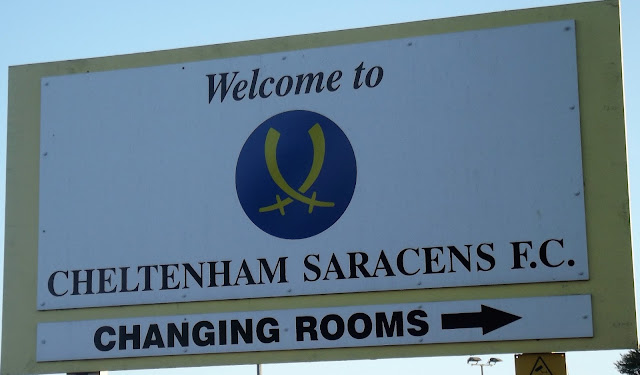 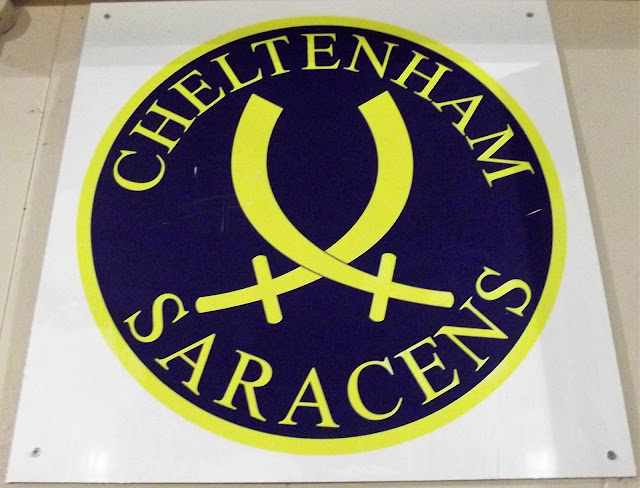 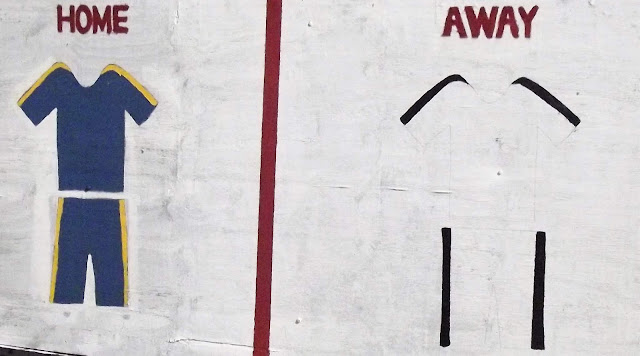 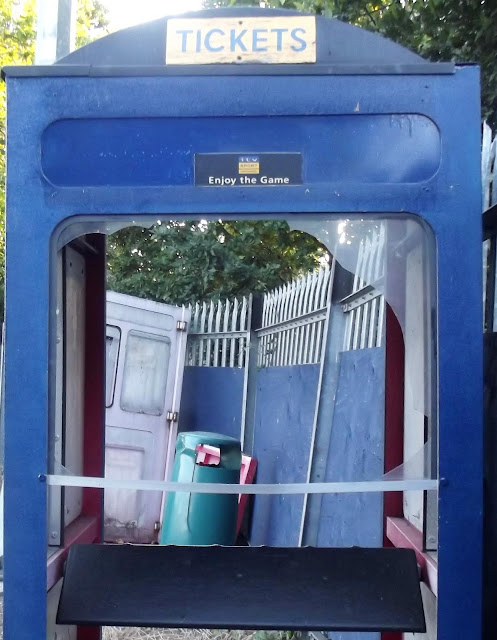 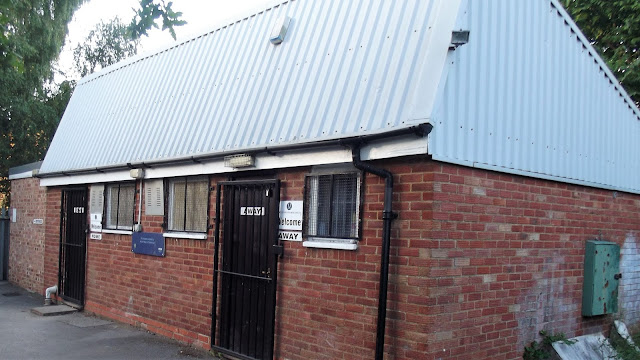 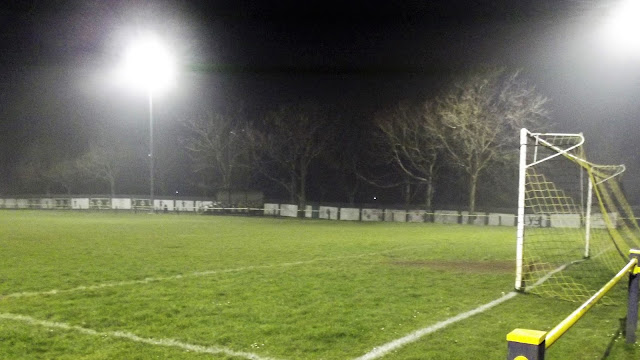 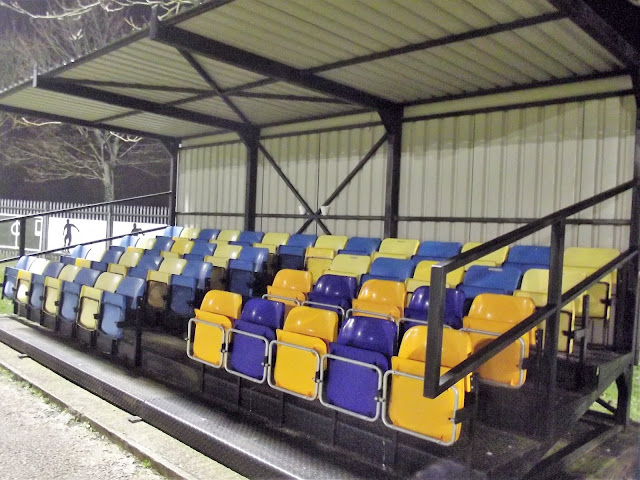 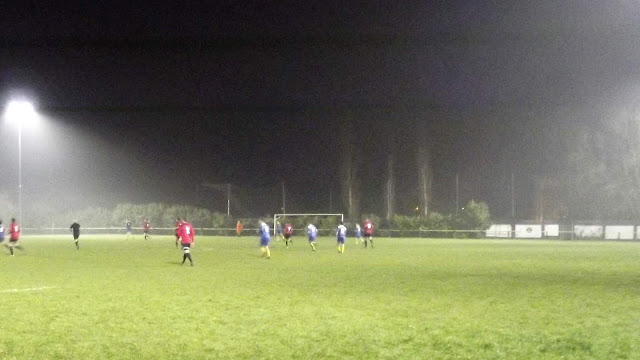 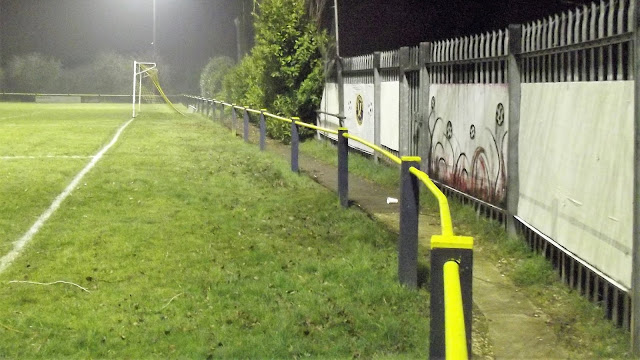 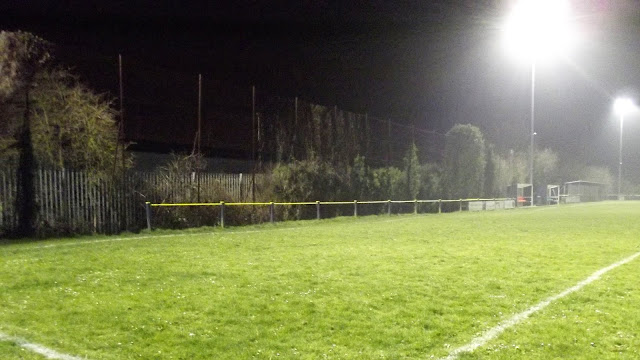 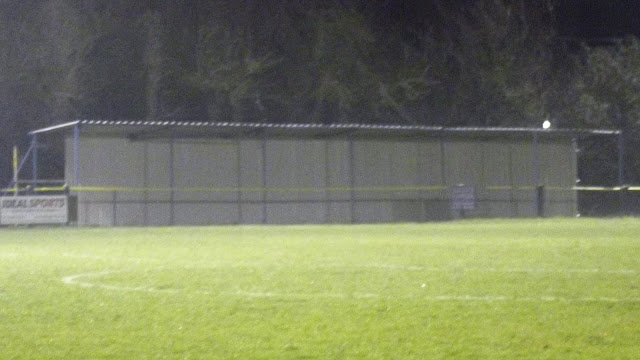 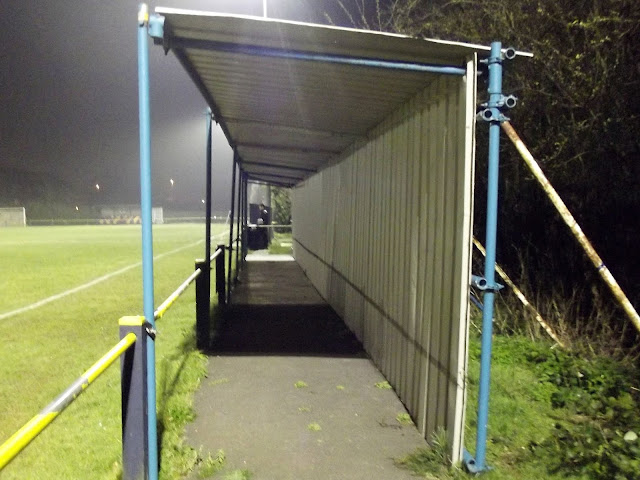 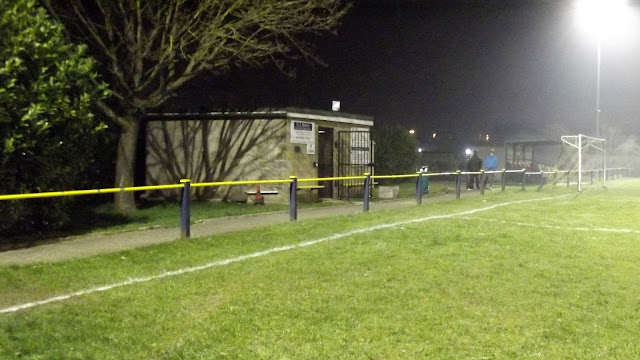 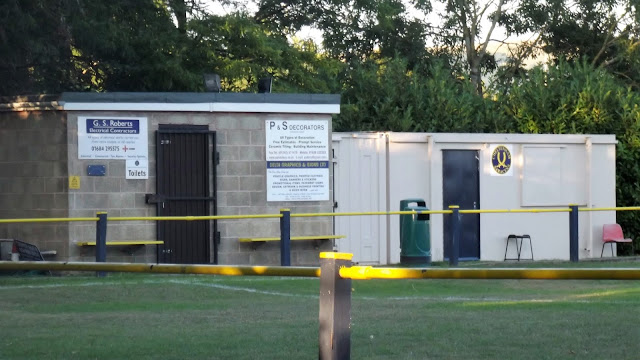 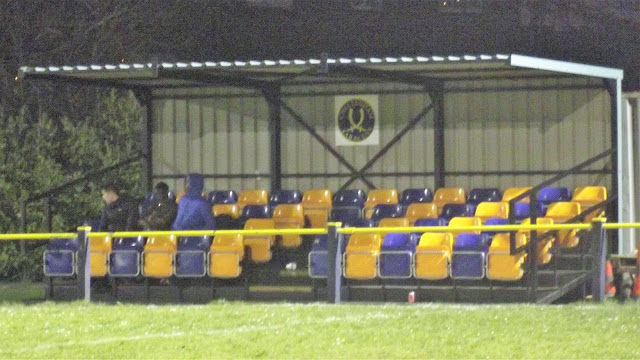