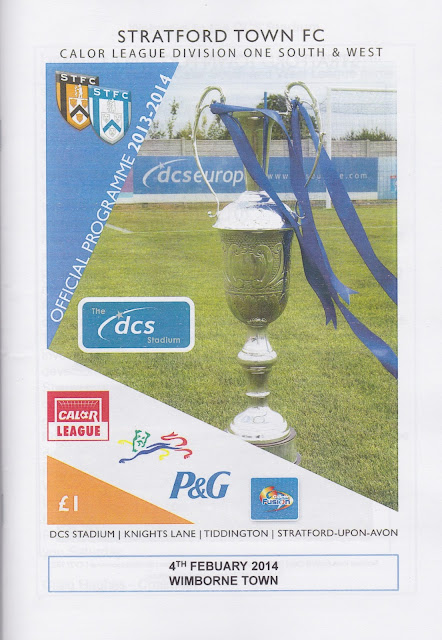 Stratford came into this game on the back of a 4-1 win at Didcot Town on January 18th. They found themselves in mid-table in 13th position.  Not a bad record when you consider they only came up from the Midland Alliance at the end of last season. Their famous former players include Dennis Bailey who was the least opposition player to score a hat trick at Old Trafford when QPR beat Manchester United 4-1 back in 1992. He spent the tail end of his career with the club between 2004 and 2006. You'd not bet against him losing his record soon, however, with David Moyes in charge at the Red Devils! A player who played as a youngster for Stratford is Matty Blair who has gone onto play in the football league with York City, Fleetwood Town and Northampton Town.

Visitors Wimborne Town were 3 points and 3 places above their opponents in 10th place. Following their 6-2 win at Evesham on December 28th they didn't play a game for the whole of January. They were actually on my list of games I was considering going to on Saturday but the fact that it had no fallback games put me off. In any case, they lost 2-1 at home to Bishops Cleeve. Remarkably in their first season in the FA Cup in 1982/83 they reached the first round proper, beating Bridport, Falmouth Town, St Blazey, Bath City and Merthyr Tydfil before losing 4-0 to Football League side Aldershot. They won the FA Vase in 1992, beating Guiseley 2-1. Their joint manager that day was Alex Pike, who is currently eyeing another trip to Wembley as boss of FA Trophy semi-finalists Gosport Borough. After years of ground grading issues, they finally made the step up to the Southern League in 2010 after finishing 2nd to Champions Poole Town in the Wessex League Premier Division. Their famous former players include Steve Walsh and Luther Blissett as well as former AFC Bournemouth players Mark Ovendale and David Town. 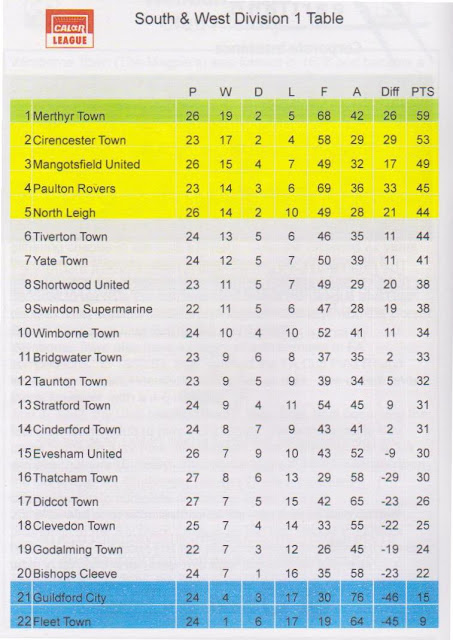 After the expensive trip to Stafford on Saturday, I looked at my football costs for the season. Considering it had cost me over £50 I was pleasantly surprised that I had spent £1384.85 on football this season on 76 games - an average of £18.09 a game. Though it was still a substantial sum, it was less than I was expecting. This sum includes tickets, programmes, travel, food and drink. I have kept costs down by taking my good friend Anwar to games (who is addicted to footy as I am) and a couple of times where I have done jobs on the way to the game and got money back that way. I was targeting a £1750 spend at the start of the season (100 games at £17.50 each) but that had gone out the window, purely due to the fact that I was expecting to do well over 100 this season. Still, I enjoy it, so it's not too much of a problem. I had the day off as per usual for a Tuesday and spent the day chilling and deciding what game to go to. For the first time in months, it was a case of a few games being off rather than the whole lot. Anwar had given his preferences as Stratford Town and VCD Athletic, and as the latter meant playing the M25 lottery in the rush hour I opted for Stratford Town v Wimborne Town. I left home at 3.20, planning on stopping in Aylesbury on the way to get some diet Irn-Bru to take to the game. Once I had done that I made my way over to Anwar's, leaving his at 4.45. For once the traffic was kind to us. We were both keen to save money so we eat at Morrisons Cafe in Stratford. I had Chicken Tikka Masala, rice and naan for £4.50. Though not up to the standard of an Indian restaurant it was still very nice and piping hot unlike the last time I went in there. We made our way to the ground and as the turnstiles were not open went and sat in the warm bar for a bit. 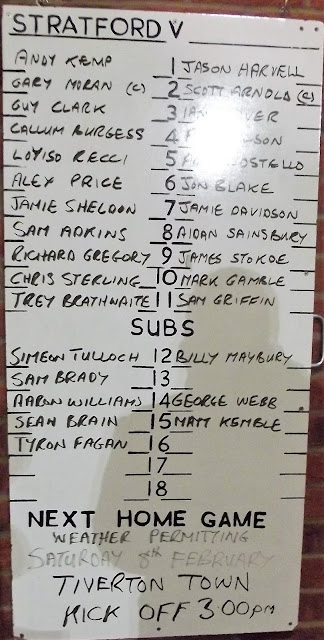 We went into the ground at 7.15 and chatted to a couple of friendly people before buying a programme. The club shop was pretty good with the usual merchandise alongside a good selection of old programmes. Sadly none that I needed, nor pens although it was a commendable effort. I went around the ground and got some pictures also checking Facebook while I waited for kick off. It was cold wet and very windy by now so I got myself a Bovril. It was hot but not boiling so I drank it quickly. We chose a seat at the back of the stand as the wind was blowing the rain in. The first half was decent with chances at both ends. It was the visitors who drew first blood, a 14th-minute finish from close range. Stratford equalised from a Richard Gregory penalty after a player was fouled in the box and that's how it stood at the break. At half time I went back into the bar to warm up, putting my bag in my car before I went back in, to save carrying it around. Just as I came in for the second half I bumped into Twitter user Oxo Baggie who I had a brief chat to. It was his tweet to say that he was coming that was one of the reasons why I chose this over VCD Athletic.  The second goal for the visitors was a real beauty. Though it was wind assisted, Ian Oliver's shot flew in from 30 yards, deceiving the home goalkeeper. Jamie Sheldon soon put Stratford back on terms when he scored straight from the corner. Again the wind had a part to play in it but it was still a great delivery and he deservedly won the man of the match. Stratford went ahead in the 70th minute, a great free kick from Gregory flying in the bottom right-hand corner. Having had the lead for the first time in the game, they were not going to let it slip and sealed the game on 88 minutes when the Chris Sterling worked his way into the area before drilling home.


It had been a game played in windy and wet conditions and I had got a bit wet despite being at the back of the stand. The mobile signal had been very poor and the internet slow but it had been a great game at a friendly club. I went into the bar and went to the toilet before driving home. On the way back we listened to BBC Coventry & Warwickshire and I was pleased to hear that Lincoln had lost at home to Nuneaton. They also announced the surprise sacking of Brian Laudrup from Swansea. Later I tuned to TalkSPORT and listened as Sheffield United won at Fulham. The presenters were saying it was the worst game they had ever seen, thankfully not a tag that you could apply to the game we had just watched. I dropped Anwar off at 10.55, getting home myself at 11.20. I checked Facebook and some other stuff on the internet before watching TV and going to bed. Sadly I was wide awake thinking about future trips and only got about an hour and a half's sleep, but I was fine the following morning. 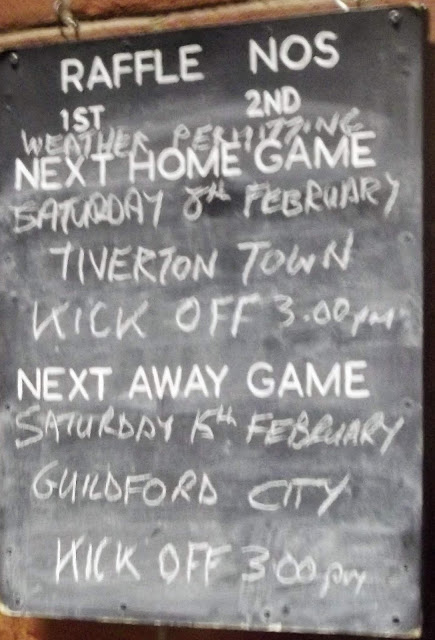 I originally visited the DCS STADIUM on the way to Wycombe's 1-1 at Shrewsbury Town on 19th March 2011. Considering tonight's game would be under lights, I am pleased I went, so as to get some good daylight pictures. I was impressed with the new build, it looks very smart at the time for a step 5 ground. The whole ground was uncovered, apart from a modern seated stand on one side of the pitch.

The tea bar has a decent selection, even if the drinks could do with being a bit hotter. The club shop was a lot better than most at this level. The bar was modern and warm on a cold night and from what I could see had a decent selection, in the case of cider, Thatchers Gold. The town is a few miles away and I couldn't really see anywhere nearby if you were looking for somewhere to walk to. The programme was a good effort, costing just £1, it was well presented and had plenty of stats and info. Everything you needed to know was in there, even if there wasn't a huge amount of reading material. 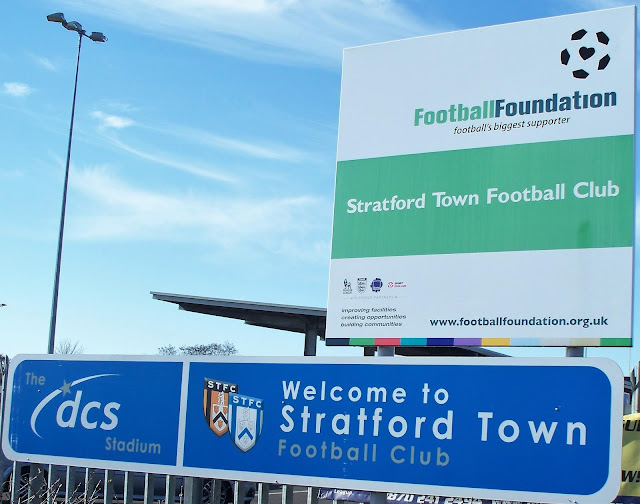 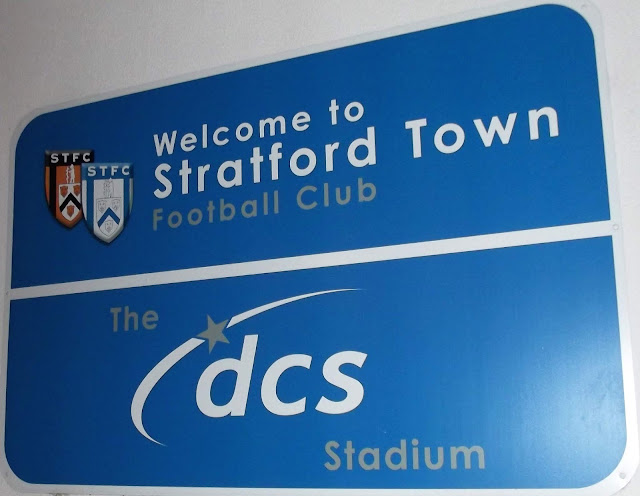 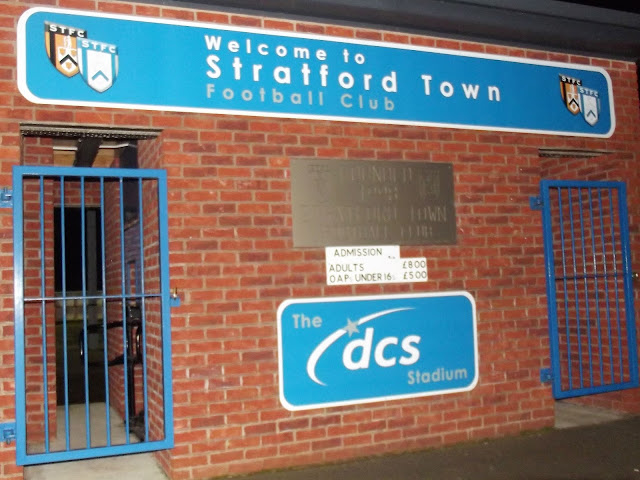 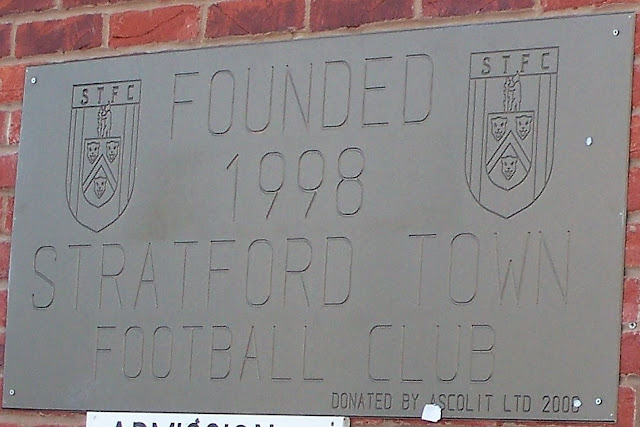 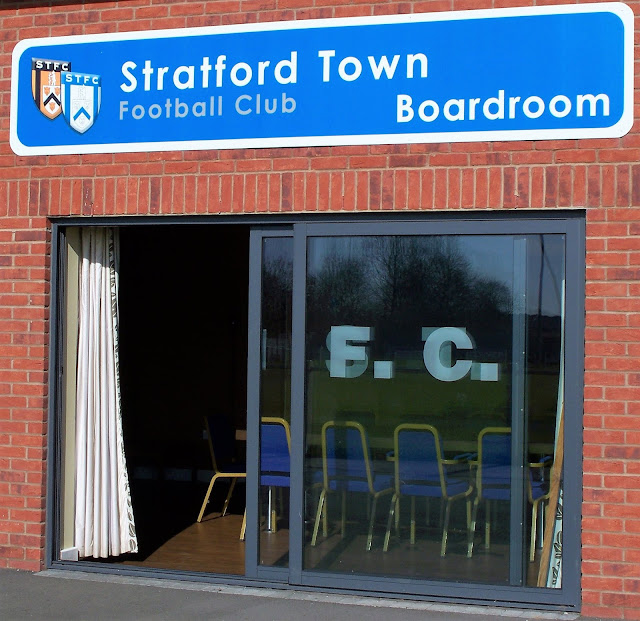 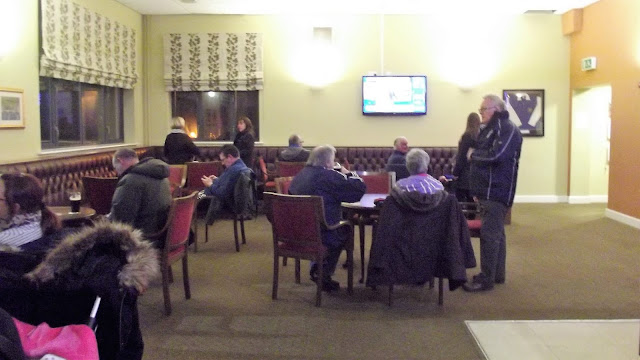 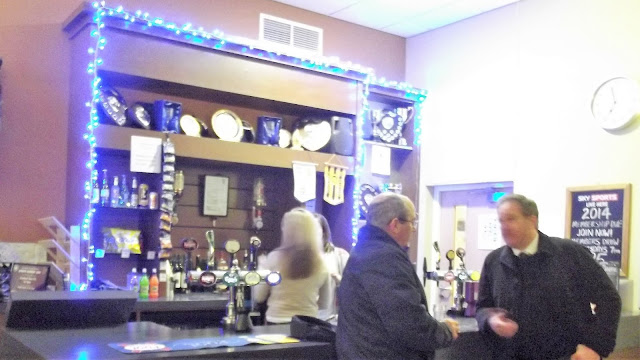 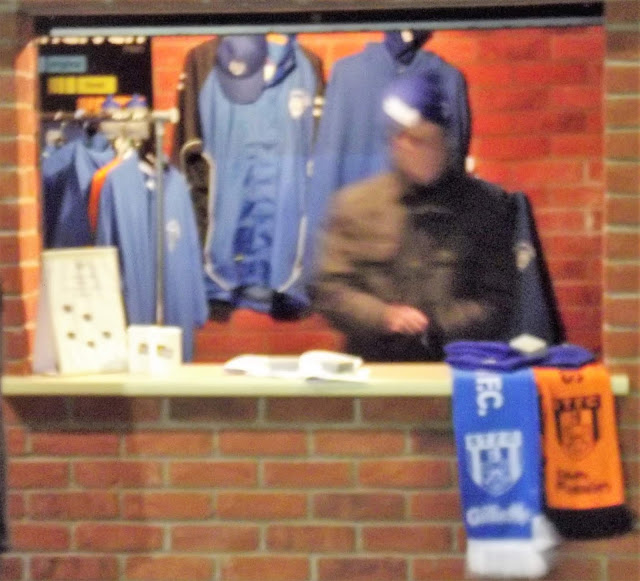 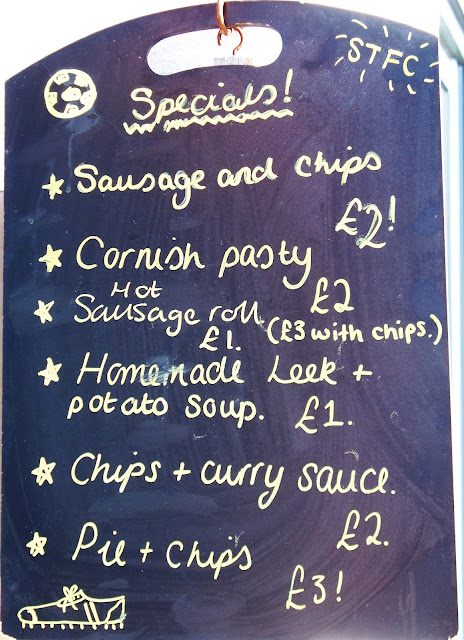 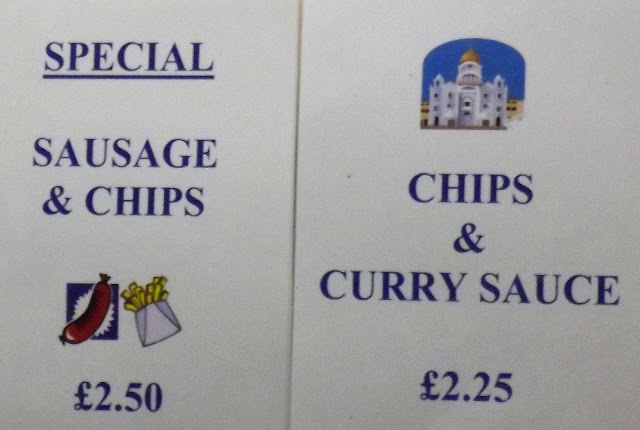 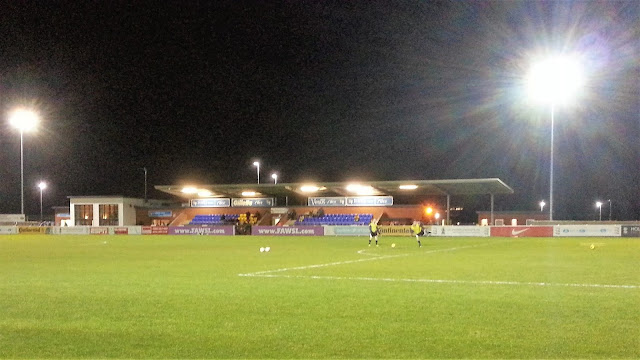 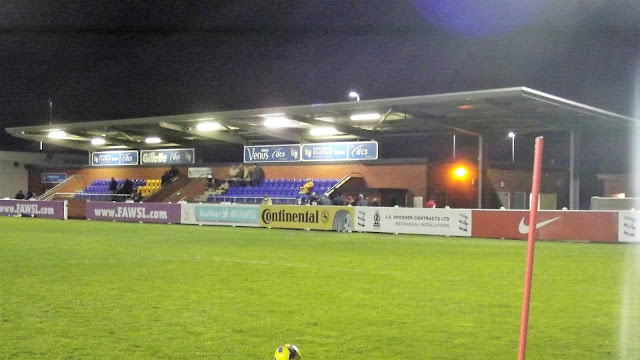 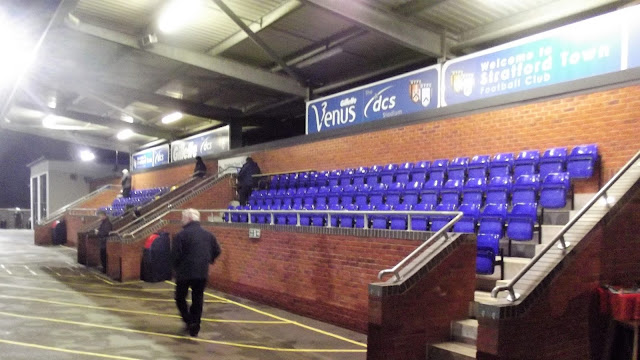 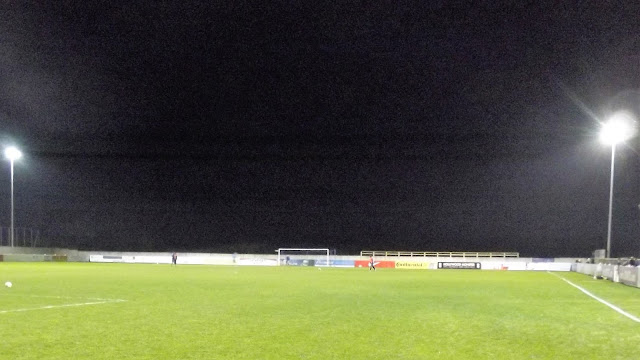 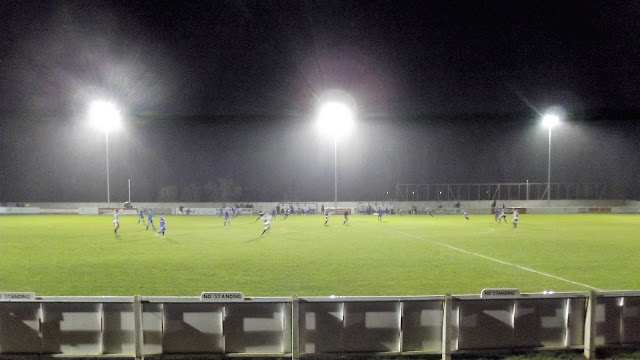 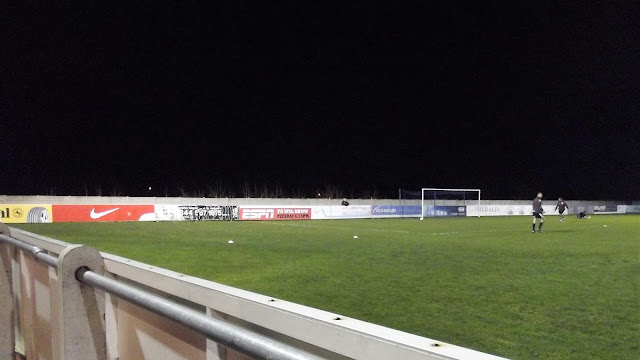 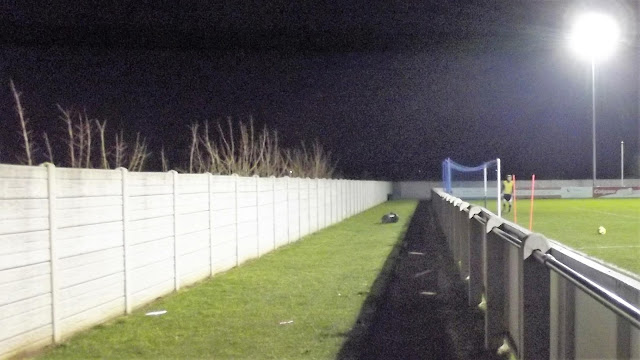