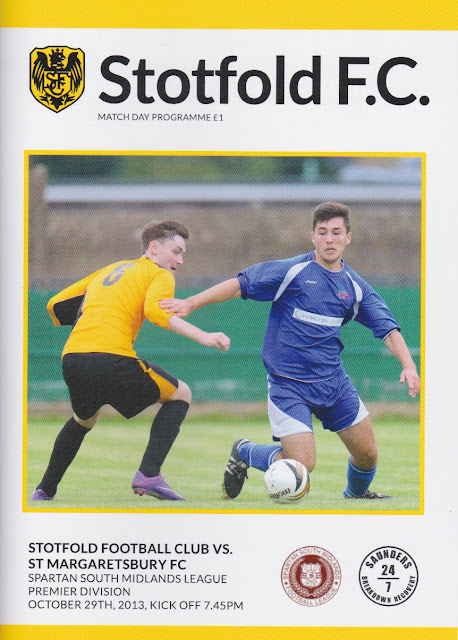 I had been to both these teams before to take pictures. Stotfold listed Holmer Green, the team less than a mile from my home as their longest trip of the season at 48 miles, edging out Harefield United by 1 mile. They had a couple of fairly notable players. Former Manchester United youngster Graeme Tomlinson, but more recently tragic former Stevenage player Mitchell Cole who died of the same heart condition that I have - Hypertrophic Cardiomyopathy, which might get you a good score in Scrabble, but it can prove fatal. Luckily mine is kept well under control with medication and doesn't affect my life in the slightest, save for a yearly checkup at the hospital.

25 miles separated the home team and tonight's opponents St Margaretsbury. I couldn't find any former well-known players for them, but they did have a good FA Cup run on a number of occasions, most notably beating then Ryman Premier side Billericay Town in 2005. And they had the advantage over Stotfold in terms of league positions, sitting safely in mid-table with 17 points from 12 games, leaving them in 12th. The home side were in 20th position, in danger of relegation with just 7 points from their 12 games. Their 2 league victories had come at home to Hillingdon Borough on the opening day and just over a month ago as they triumphed at Hadley.

There was a distinct lack of games at steps 1-4 this week. I was hoping for an FA Cup replay but the only viable one was Poole Town v Staines - and that was a 0-0 draw and not the greatest match at the original game in Middlesex on Saturday. Add the fact that it was 2 and a half hours away on a good day, due to slow roads and lack of motorway for a lot of the journey and I was not keen, considering that I had to be up at 4am on Wednesday. The leagues didn't provide much more inspiration - the only sub-100-mile trip would have meant a trip more than halfway around the unpredictable M25 and a game at VCD Athletic, near Dartford. So I was looking at step 5 and 6 and came up with 3 options. There was Frimley Green v Hanworth Villa in the Combined Counties League, one of the first step 5 leagues I envisage completing. Or there was a game at London Colney, that came in at 10 miles less, around 25 miles. But a meet was what I really fancied, considering I'd be without Anwar again who was going to see his beloved Arsenal play Chelsea in a League Cup game. I spotted Stotfold v St Margaretsbury and remembered a good lad who I chat to on Facebook, a Luton fan called Alex. We get on great and are always chatting about footy, even non-league. He lived near there and confirmed he could make it, and from then on it was game on, that is providing the weather didn't mess it up.

The expected storm did arrive on Monday, and despite causing chaos over the country, near me wasn't affected that much. There was a light breeze when I drove to work at 4.40 in the morning and some drizzle, but no signs of destruction. There was a tree down on the same route when I came back after leaving at lunchtime, a fairly substantial looking one, but apart from having to pause for a few seconds to let some cars through, my journey was just the same as any other day. I was a bit annoyed to find no power when I got home so I couldn't get a decent internet signal, have a bath or watch TV. It was off for 10 hours in all and was one of several homes across the UK that were affected. On the day of the game, I spent most of the day relaxing apart from a quick trip down town with my Dad. I had dinner around 5.30 and left pretty much soon after, just before 6. Annoyingly my phone holder had fallen off the window and was refusing to stick back on. No amount of moisture or cleaning would make it work and so after wasting about 5 minutes trying to sort it out I gave up and put the phone elsewhere, making a mental note to order a new one off of eBay when I got back home later that night. The motorway, yes the M25 again was still buggered from an earlier crash when a lorry driver overturned his lorry and sadly died. Amazingly and luckily no one else was involved or hurt, a surprise given the size of the vehicle. My sat nav estimated that I would be caught in the tail end of it, just missing kick off with a 50-minute delay, but in the end, I got there at 7.20. The only problems I encountered were a slow-moving idiot in a Volkswagen that insisted on driving at well below the speed limit on a single track road where it was too risky to overtake. Also, there was a bit of a queue to get on the A1M, but nothing too serious. I got to the ground, paid money for entry and a programme out of my car window. I checked my phone for Facebook updates while I waited around for Alex who arrived about 5 minutes before kick off. We had a good old chat about football and it was nice to have some company at the game. Some of the classic non-league elements were there - a fat linesman being one of the more amusing ones and tea served in china mugs being a nice one. 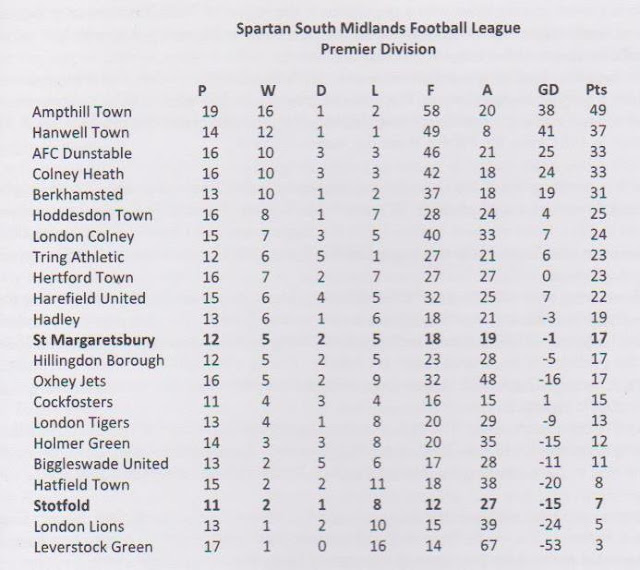 The game started scrappily with neither side being able to retain possession for very long and not many clear-cut chances being created. Stotfold took the lead around 20 minutes into the game. It summed up the game, the visitors' keeper was down injured, causing confusion in the box. The ball was laid across the area for the Stotfold player to score with an easy chance to put the home side 1-0 up. It looked like they may have been on course for an unlikely win as despite having more possession, St Margaretsbury weren't really coming close to scoring. This was to change, however, just before halftime the Stotfold number 4 was sent off for a second bookable offence, but they got to the break with their lead still intact. In the second half, St Margaretsbury started to carve out some chances and they got the equaliser around the hour mark.  It was another scrappy goal, maybe the Stotfold keeper could have done better but it was the visitors number 10, Ricky Light who scored it. It was a deserved goal as they had been the better side for much of the game. Their cause was not helped by their keeper who came flying out of his area and handballed, leaving the referee with no option but to send him off, despite his teammates' protests. That left them with the last 20 minutes to play and it was anyone's game with an outfield player having to go in goal. However 6 minutes later St Margaretsbury scored out what turned out to be the winner when Ryan Wade tapped in from close range to seal the points.

After saying goodbye to Alex I popped into the bar to the toilet while some of the car park cleared. By the time I had got back and set my sat nav for home it was around 9.50. I listened to TalkSport on the way home and there were some pretty decent scores going on in the League Cup. Leicester beat Fulham 4-3 and it was 4-4 between Birmingham and Stoke before the Potters triumphed on penalties. More interestingly to me, there was a great result in the FA Cup as Shortwood United won at Aldershot to set up a home tie with Port Vale. As Wycombe have a fairly dull game at home to Crewe, I will give that tie serious consideration if I can get tickets. Of the other games I was considering going to it was Poole Town 0-1 Staines Town & London Colney 0-0 AFC Dunstable and no mention of the Frimley Green game so it looks like I made the right choice for once, as the game was OK and livened up by the 2 sending offs. There were some right hammerings handed out on the night - Droylesden losing 10-0 at home to AFC Fylde and Chippenham losing 9-0 on their own patch to Stourbridge. After watching a bit of TV I went to sleep, not getting a huge amount which is becoming pretty standard for a Tuesday night, luckily I was fine the next morning.

ROKER PARK has a much more famous namesake as it was Sunderland's old ground, a stadium that I never got the opportunity to visit. The differences between the 2 are huge obviously, but Stotfold have a pretty decent set up for this level. There is a main stand holding just over 100, plus next to it some additional cover, but the rest of the ground is open, as is the norm at this level. The tea bar looked excellent with a decent range of food and there was a bar too which is also hired out for functions to garner the club some extra income on non-matchdays.

The programme was a decent effort. Not huge amount to read, but well designed with most of the info you are likely to need. There was an article from well-known groundhopper Brian Buck in there too. It was my 45th game of the season tonight, well ahead of most of my mates. But Brian was on his 104th game of the season at pretty much the start of October!. He was also coming up to his 11,000th game and had been to 3246 grounds, the latest being the Hive at Barnet. How he can afford it I don't know, but it seems like a whole lot of fun. 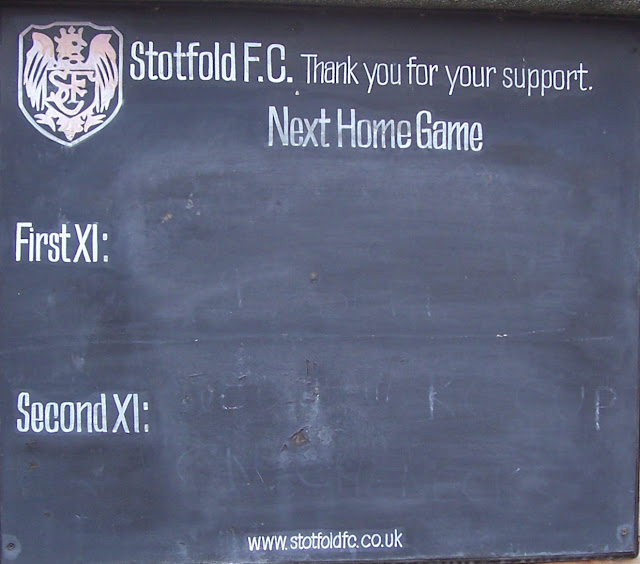 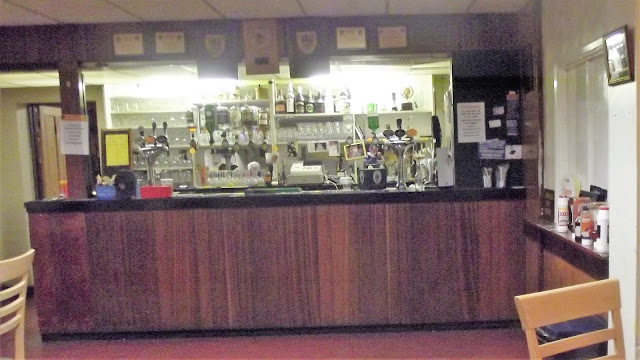 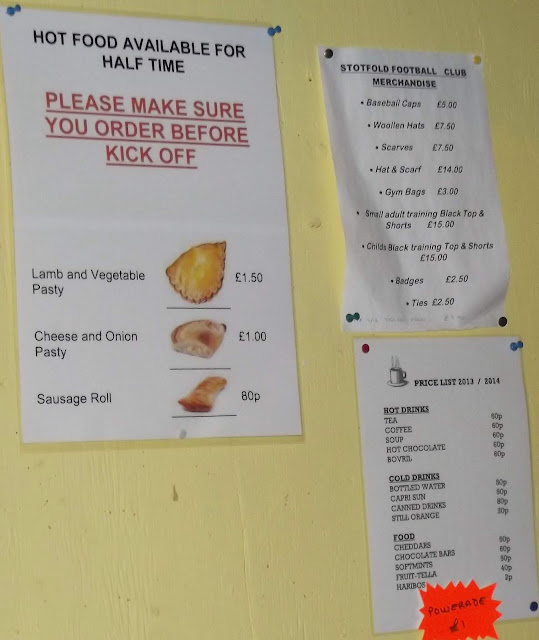 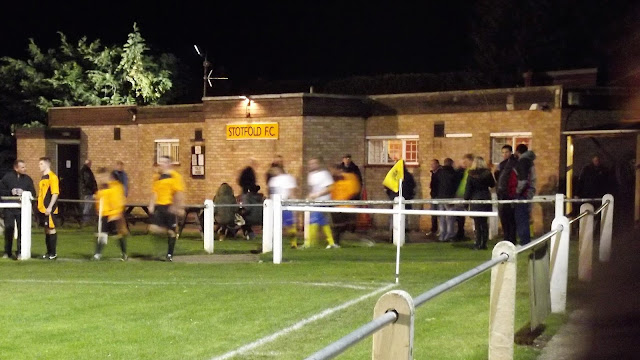 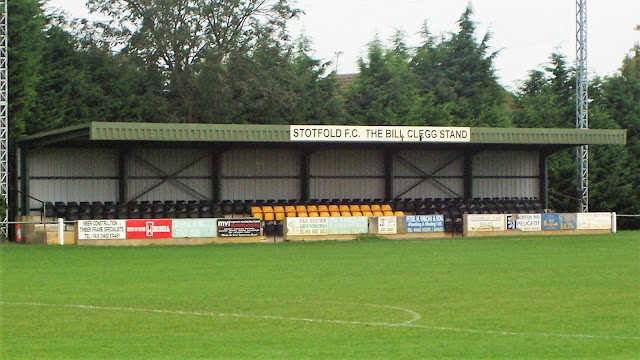 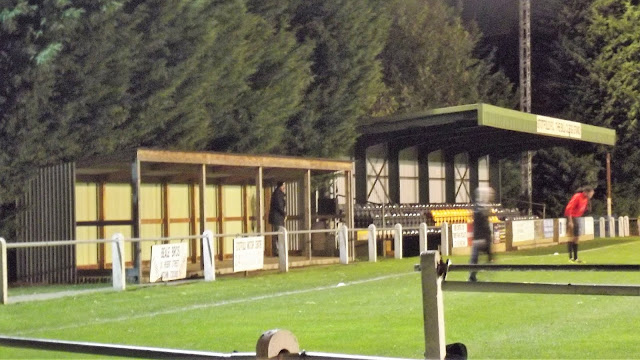 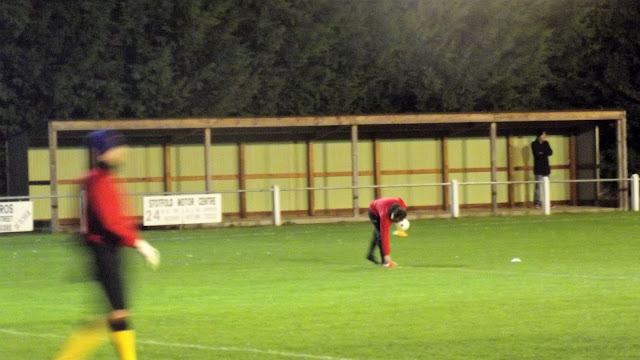 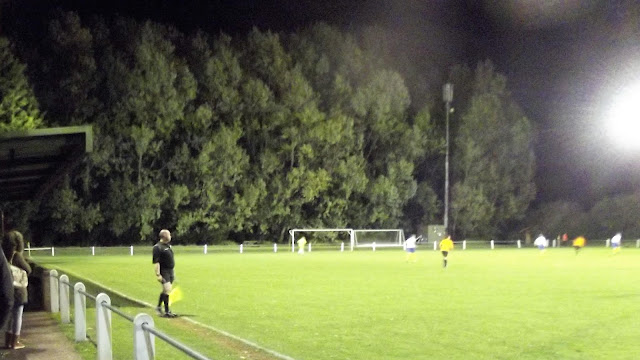 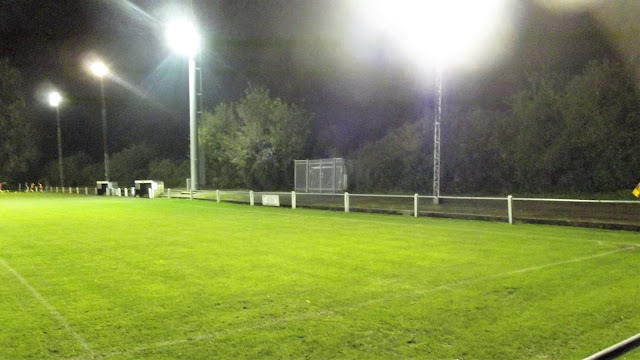 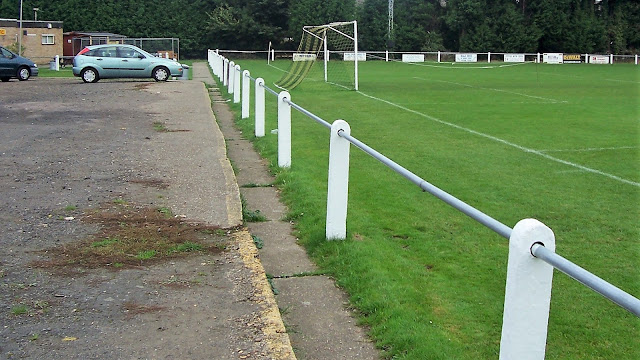 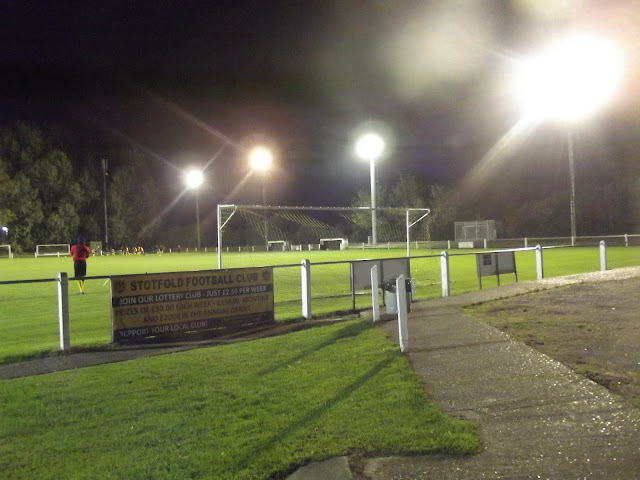