Barrow is a team who I have seen quite a few times in the random matches that I have been to. Firstly in 2008, they strolled to a 4-0 victory at Tamworth, in a FA Cup 4th qualifying round tie. 2 years later I saw them again at Histon, this time winning 3-1. My latest Barrow game came last season when they drew 1-1 at Hayes and Yeading. In fact, I had only seen them lose once, this when I was very young when I saw Wycombe beat them 3-2 in February 1992. But I had never had the pleasure of seeing them play a game on their own patch, though I did visit the ground during a family holiday to the Lake District in 1996. Originally I had been meaning to go to Burnley today, to complete ground 89 of 92, but their game had been called off, due to Huddersfield's involvement in the 5th round of the FA Cup. So I looked for games in the Blue Square Premier, another league I was looking to complete. I was left with 2 choices - Barrow or Hyde. Seeing as I was really far up North anyway and that Hyde, being in Manchester would be a lot easier to go to, I opted for Barrow and their relegation 6 pointer against Nuneaton. I woke up on Saturday morning and after a bath and getting dressed, I was on my way at 9.30. After a pleasant but long drive through some pleasant drive through some nice countryside, I was in Cumbria. I stopped at a supermarket called Booths to get a paper, something to eat and a bottle of Sheppys cider for later. I then stopped to take pictures of Holker Old Boys ground, who play in the North West Counties League, their team were there, getting all the kit and preparing to drive to an away game. I got into Barrow about 11.30, parked up near the ground and walked into town. The town was a lot bigger than I was expecting and so it was 1.30 by the time I was back at the ground. I went for a pint and to watch some of the Luton v Millwall game in what I thought was the club bar, but it turned out to be the social club of the local junior football team. I then went back to my car to get my camera, getting into the ground just after 2.30. After looking around and taking some photos it was time for kick off. 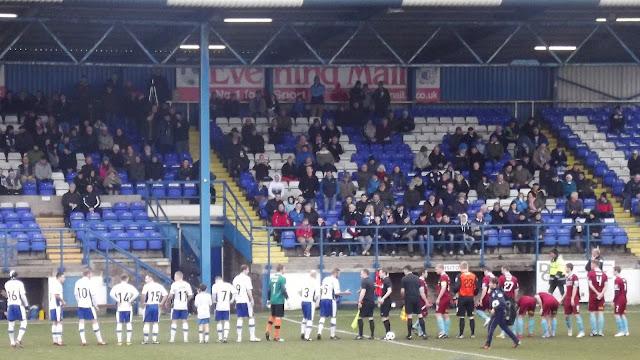 The first half was dominated by Barrow, with the home side creating several chances and being very unlucky to go in only level against a mediocre Nuneaton team. At half time I went out to go into the clubhouse and saw that they had a club shop there as well. I like collecting pennants and picked up a right bargain, a FA Trophy 2010 pennant for just a quid. There was also loads of other cheap stuff in there too and it was a bit flashier than the old programme shop that I had been in earlier. I then went upstairs to the bar, which was really nicely done out. I spent the rest of half time having a pint, in a lot nicer surroundings than I had enjoyed pre-match, and the cider was a lot nicer too, Kingstone Press that I had not had for a while. The second half started in similar fashion to the first and Barrow got their reward on 49 minutes when Adam Boyes opened the scoring. The home team continued to control the game and although they didn't create as many clear cut chances as the first half, they still didn't look like losing. It was only in the final 10 minutes that Nuneaton started to look like scoring. A few minutes from the end, I bumped into some Barrow fans, John and Adam, that I chat to on Facebook. Sadly in between the time that I met them and the end of the game, Barrow conceded 2 late goals to gift Nuneaton the win, one a horrible mistake from the keeper who failed to deal with a cross. We shook hands and said our goodbyes and I left feeling disappointed that a friendly club with good fans had failed to pick up 3 vital points in this relegation battle. After the game, I drove down to Blackburn as I had a ticket to see former TV presenter and radio host Terry Christian at the Thwaites Empire Theatre. It was a bit tricky to find at first, only being a small venue. But the show was entertaining, talking about Christian's early life as a Catholic and subsequent career in the media. After a half hour drive back to my hotel, I got back just in time for the football highlights, watching them with a few ciders before enjoying a long nights sleep. 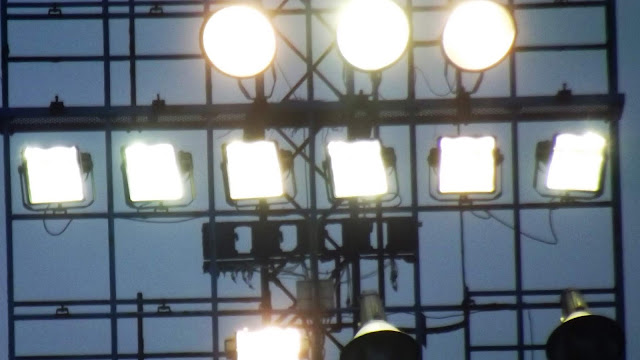 HOLKER STREET is a traditional old non-league ground. At the entrance, where I went in along the side there was a large covered terrace, which continued round to the right, though behind the goal was uncovered. At the other end where the clubhouse is, there was a smaller uncovered terrace. The only modern looking part of the ground is the other side, a new grandstand built in the mid-'90s which holds around 1000. All in all a charming and traditional venue.

As mentioned before the club shop and bar are excellent, in fact, there are 2 shops, one in the ground selling old programmes and another under the bar offering a good range of other merchandise. The bar upstairs is one of the nicer clubhouses I have been in, meaning there is no need to go elsewhere. Food wise, the tea bar looked a bit basic, but I didn't try anything. Overall I enjoyed my visit here, and it was well worth the effort if going, despite it being a long way. 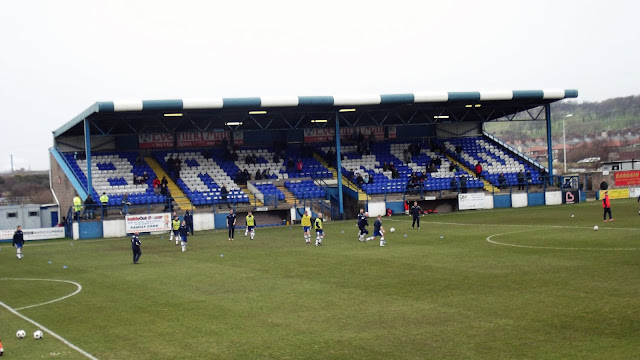 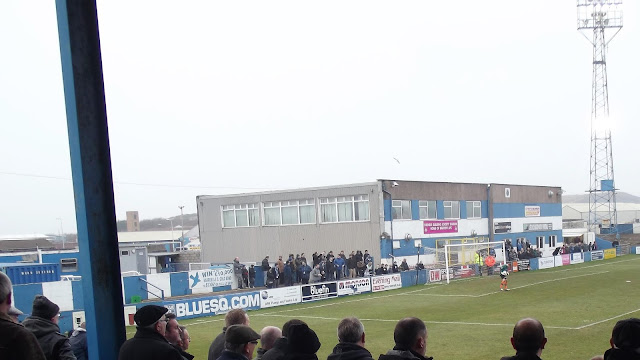 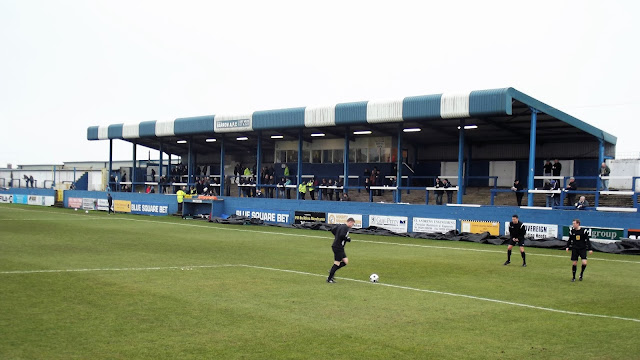 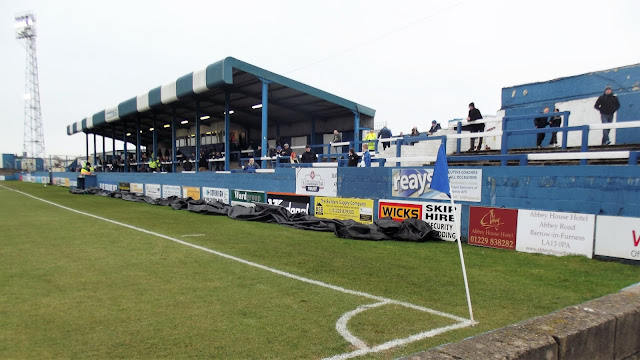 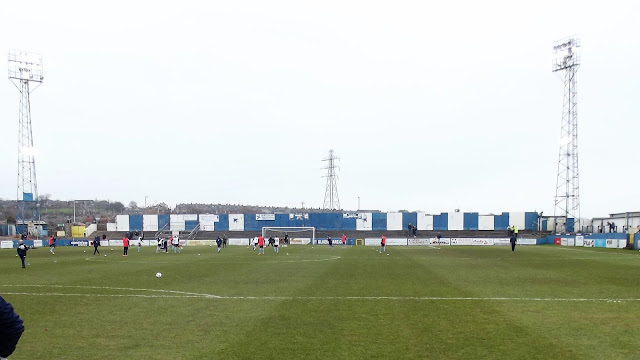 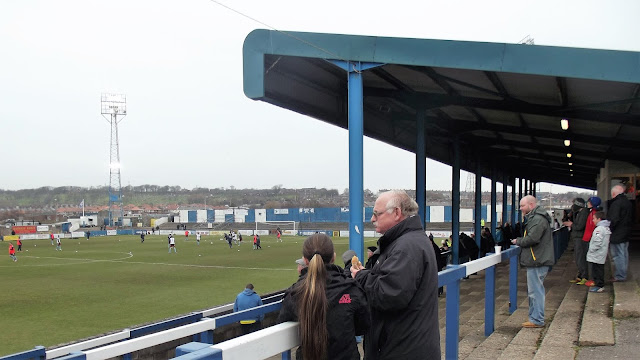