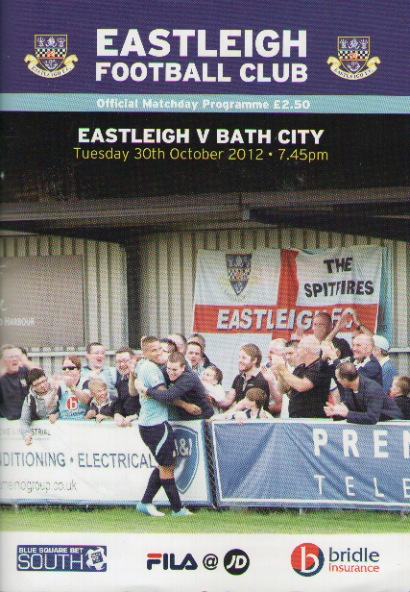 As part of my mission to go to all the grounds in the Blue Square South, I had to visit Eastleigh. This tied in nicely with my plans to meet my Bath supporting mate Louis Mancini, who also has a blog, which you can see here. It was also a chance to see a couple of ex Wycombe players, namely Charlie Griffin and Joe Burnell. Both had solid rather than spectacular careers at Wycombe. Charlie Griffin was a striker who scored 3 goals in 21 appearances for Wycombe, though I remember him being a good player. My main memory of him was sustaining a nasty head injury in a preseason game at Oxford City and having to be taken away in an ambulance. Joe Burnell was a right-back or central midfielder in his injury-ravaged time at Wycombe. He was another player who gave his best and it was appreciated so much that he was even cheered when turning out for rivals Oxford. Given the state of the current team, I reckon that they would walk into the side at the moment. 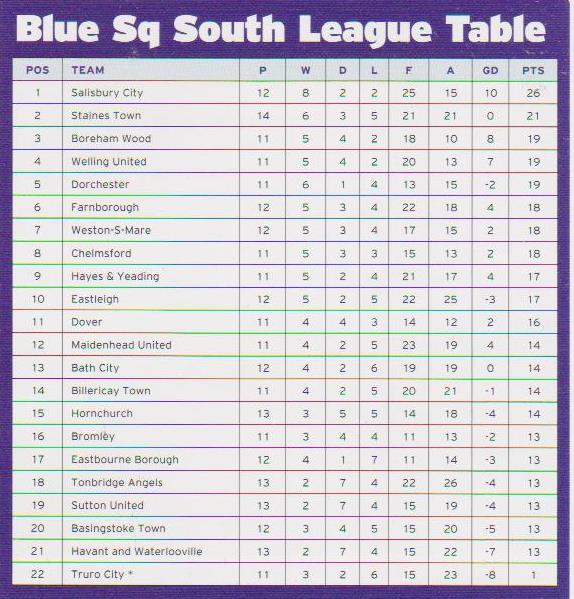 On the day I left home at about 3.20, planning to go into Eastleigh for a short time and check out what the local Cash Converters was like, especially with regard to retro games consoles. But owing to an unusually small delay on the M25 and mainly Eastleigh being full of traffic, I arrived there around 5.20. After a brief look in the laces that were still open, I went and got some chips and nipped into Sainsbury's and got myself some drinks, grapes and chocolate cornflake clusters for the game. It was around 6.50 by the time I returned to my car. By the time I had navigated the short journey to Eastleigh's ground it was just after 7.05. After a quick sort out of my car boot, I went in the ground. My first port of call was the Club Shop, where I was delighted to bump into my mate Louis, recognising him straight away through his distinctive mop. He turned out to be just as great as I'd imagined and we had a good chat throughout the game. The club shop had a small selection of 10p programmes, but nothing that I fancied. And no pennants either sadly. Though given how choc full my wall is, it was a blessing in disguise. After taking some pictures of the ground, I got some chips and took my place behind the goal that Bath were attacking, along with Louis and the other Bath fans, enjoying the delightful west country brogue of some of the fans. The pre-match entertainment was excellent, thanks to a really good matchday announcer, who had enthusiasm for the job that he was doing, played some feelgood music and had some nice features including a quiz between 2 opposing fans which the Eastleigh one won. But the Bath supporter got his score prediction right, backing his team to lose 3-1! The announcer also must have broken the world record for mentioning that their stadium was sponsored by Silverlake, a local car dealership, name dropping them at every opportunity. 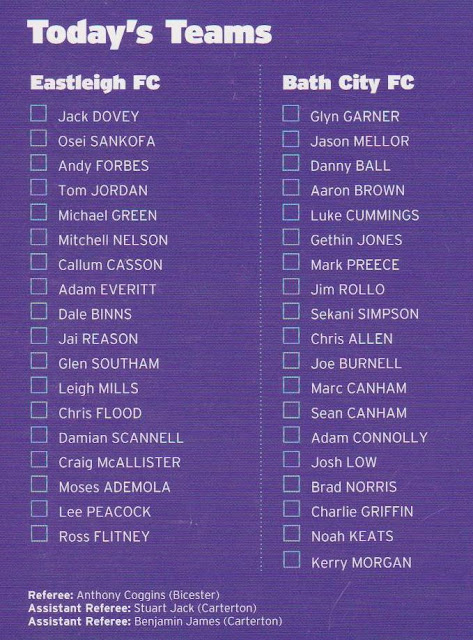 As for the game, it was a fairly one-sided affair. All the goals came in the first half with Damien Scannell opening the scoring on 11 minutes when he got clear of the defence and finishes past Bath keeper Glyn Garner. It was 2-0 on 15 minutes when Craig McAllister followed up past Garner after the keeper had saved an initial shot. Bath City reduced the arrears on 33 minutes when Chris Allen blasted into the roof of the net after the initial shot was saved. Six minutes later Eastleigh restored their two-goal lead when Jai Reason converted a Scannell cross from 8 yards. The rest of the game petered out and although Bath City had a penalty appeal turned down, there was no further goals. In the second half they announced the attendance as 525, though everyone agreed that was rather dubious as there looked to be little over half that in the ground. After the game, I shook hands with Louis and we made concrete plans to meet at the Hayes and Yeading v Bath City game in January, where we would be joined by Hayes fan Corey (who I have met before on several occasions) and Bath fan Andy (who I haven't met yet). I got out of the car park pretty quickly and after programming my Sat Nav, I was on the way home. On the way I put my phone on loudspeaker and had a good long chat with my mate William, who is a Grimsby fan. All manner of subjects were discussed, as long as the topic was football. There was certainly plenty to talk about, what with Arsenal's stunning comeback from 4-0 down to beat Reading 7-5 after extra time. But more pleasingly in my eyes, Bradford City's victory over Wigan in the League Cup. I would know all about great giant killings in this competition having followed Wycombe all the way to the semi-finals in 2007 where they lost to Chelsea. Bradford are now just one game away from matching that, having qualified for the Quarter Final. Although it would make Wycombe's achievement a little less exclusive if they were to match it, or even go one better, I really hope they do it. In these days of over-inflated egos and even more inflated wages, us lower league fans of proper football have got to stick together. Anyway, it was a far easier journey home, and after an hour and a quarter journey, I was back home by 11PM. I stayed up for an hour extra before attempting to sleep, but I hardly got a wink all night, luckily I was fine the next morning though. 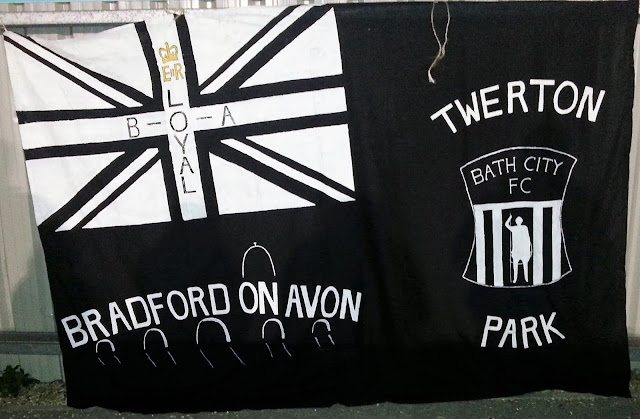 THE SILVERLAKE STADIUM is a smart modern non-league ground. There is flat covered standing along the side of the pitch, though the cover is set back from the pitch, and most people just lean against the pitch surround. Behind one of the goals is seating to meet ground grading requirements, whilst behind the other goal is open standing. However, the most impressive feature is the large main stand. It is elevated and so offers a great view of the action. I don't recall seeing anything near to the ground, as it's a bit out in the middle of nowhere. There is however a nice bar at the ground which has Sky TV and you can also get all the usual grub from the tea bar. As mentioned before, the club shop has a small selection of cheap programmes and also other club merchandise. The pictures in the light are from a previous visit just to take photos when ironically the opponents for the next game are the now-defunct Team Bath, who shared Twerton Park with City during the last few years of their existence. 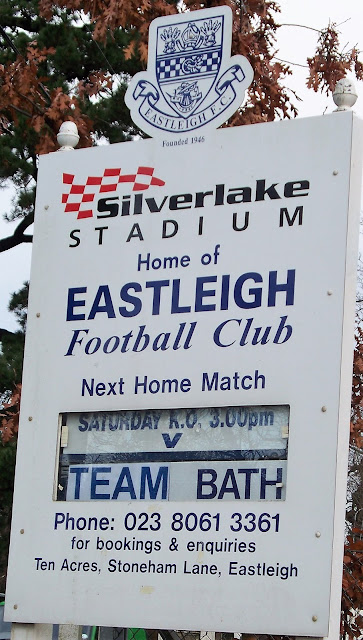 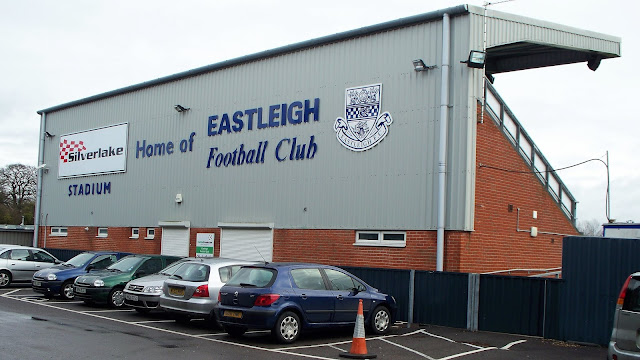 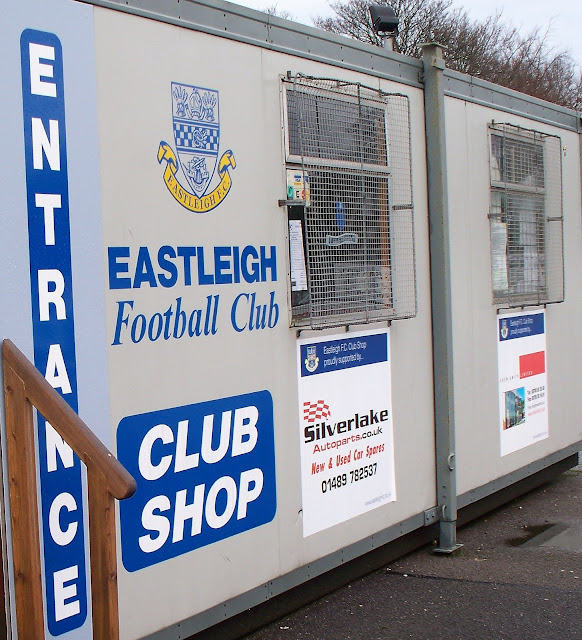 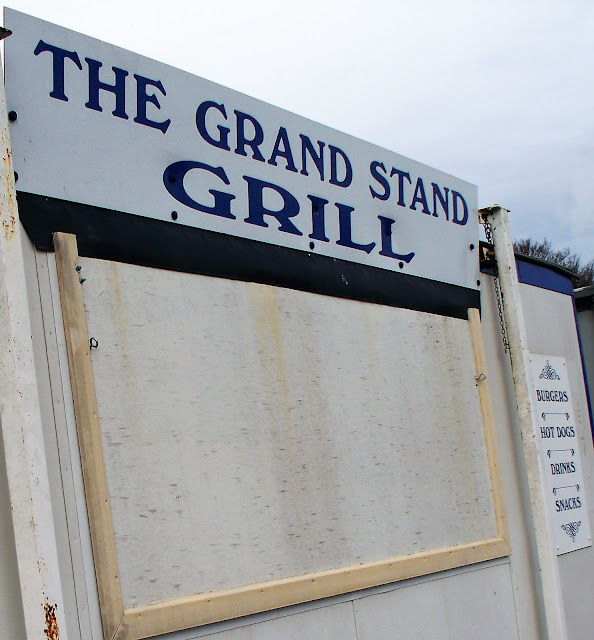 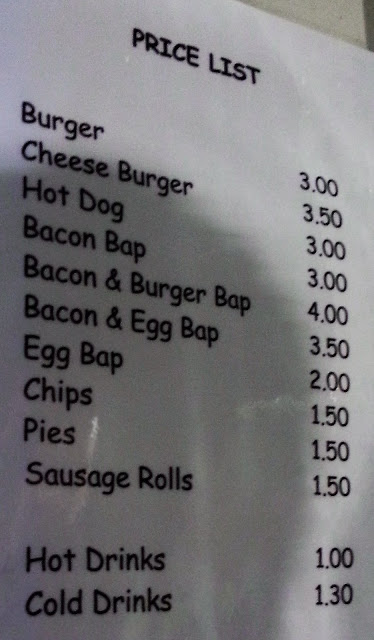 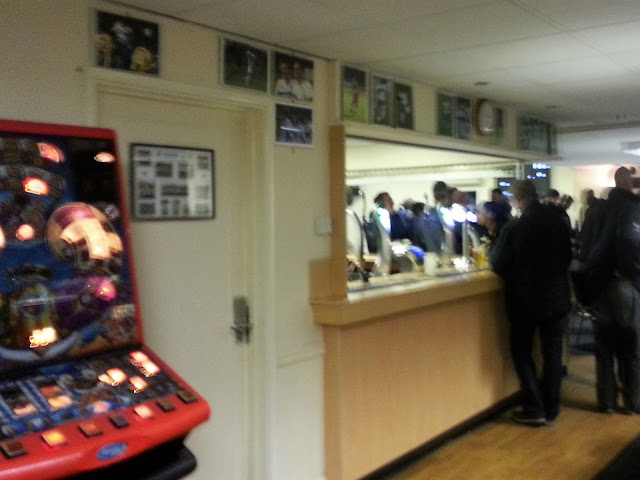 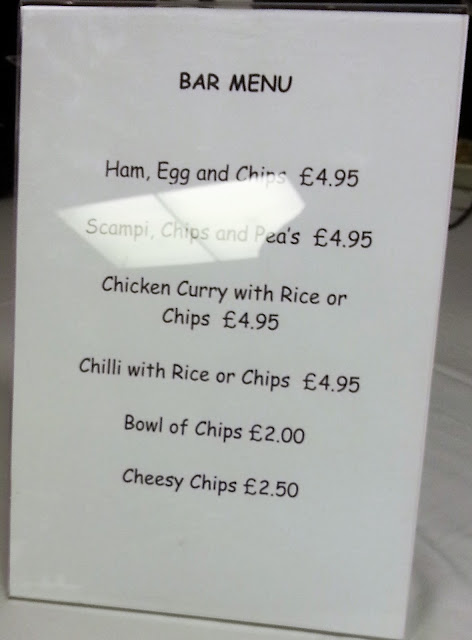 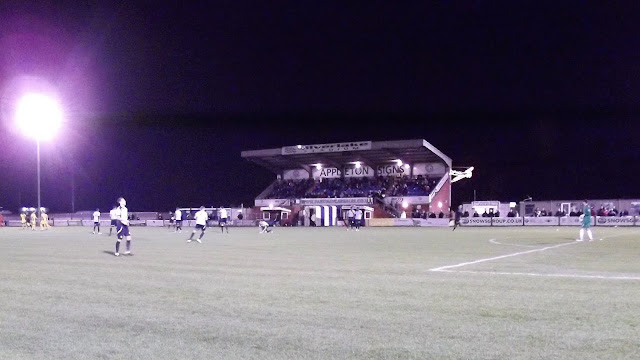 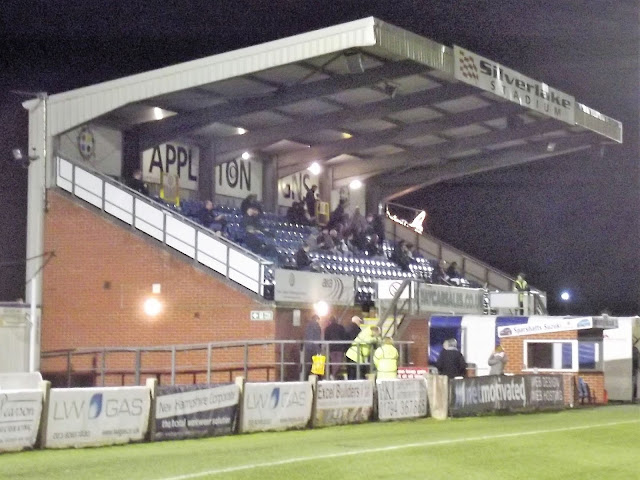 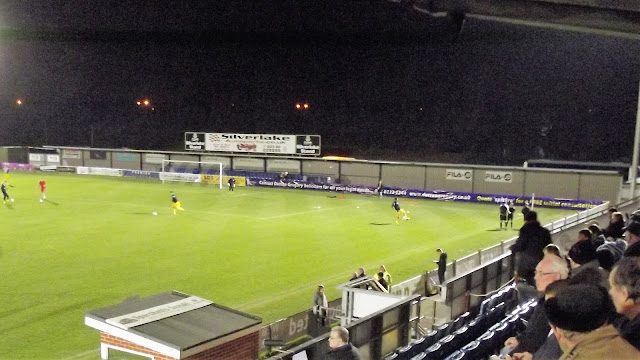 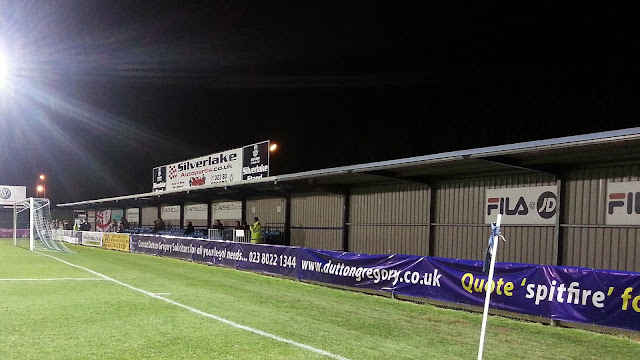 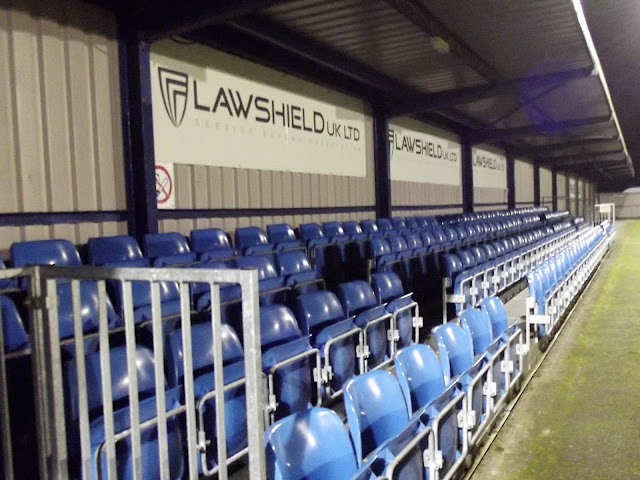 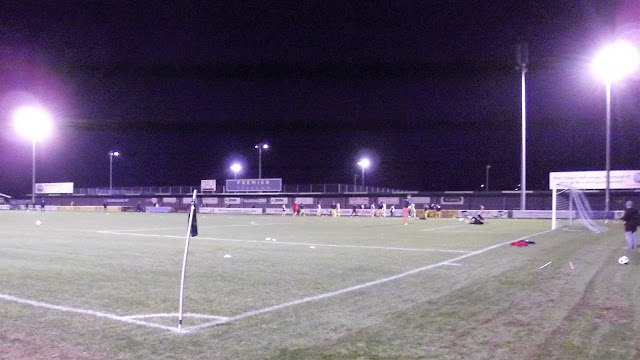 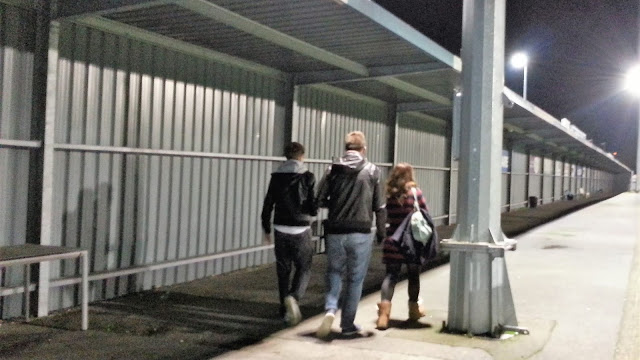 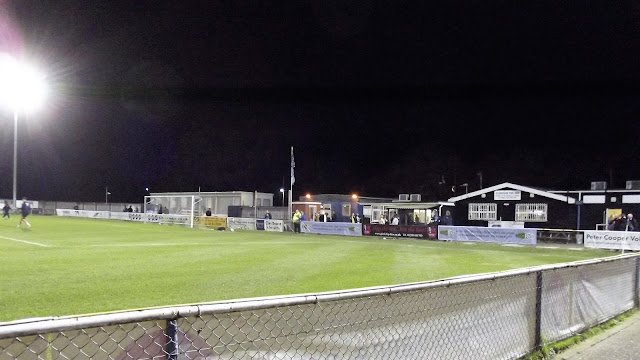