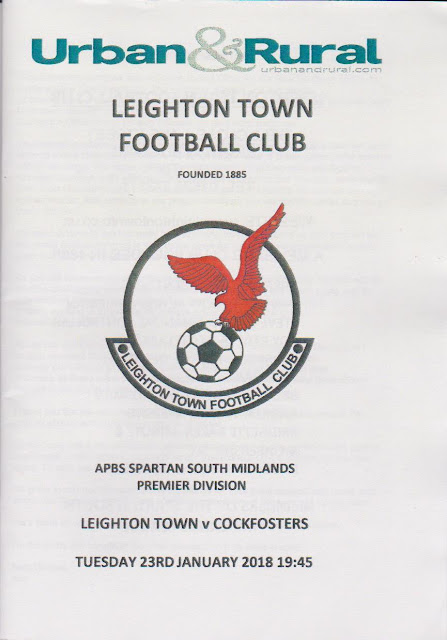 The club was formed in 1885 with their formative years spent in the Leighton & District League, a competition that saw them enjoy great success. They’ve been known as Leighton Town for the most part but changed their name to Leighton United in between 1922 and 1963. They’ve mainly plied their trade in the Spartan South Midlands League (or it’s two forerunners), winning the South Midlands League in 1967 and 1992. Generally, they’ve played in the higher tier and finished no lower than 7th when they have dropped down. Brief spells in the Hellenic and United Counties League saw little success and saw them switch back to their usual home after a couple of seasons. Their most successful spell, league-wise came around the turn of the millennium. Joining the Isthmian League in 1992, Leighton Town spent time in the bottom two tiers, with a best-ever finish there of 10th in Division 2 in 1997. A reorganisation of the Non-League pyramid in 2004 saw them switch to the Southern League. A record finish of 11th in Division 1 Central (step 4) in 2011 was a high point, but it was all downhill from there. After years of struggle, Leighton Town finally succumbed to relegation in 2016, returning to the Spartan South Midlands League. A 16th place finish in the Premier Division has been followed up this year with much better form, the team sitting 4th, prior to the previous weekend’s games. 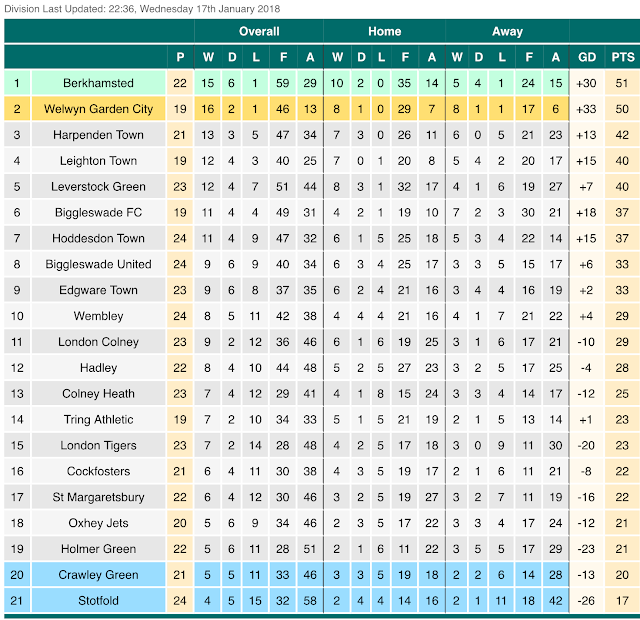 In the FA Cup, the best ever run came during the 2007/08. After beating FC Clacton, Ashford Town, Kirkley & Pakefield and most notably Boreham Wood, they succumbed 3-0 at Havant & Waterlooville in the 4th Qualifying Round. their victors going on to reach the 4th Round and enjoy a match against Liverpool. 2005/06 saw the best ever FA Trophy progress, with Eastleigh amongst their casualties, prior to a 1st Round defeat to Boreham Wood. In the FA Vase, Leighton Town reached the 5th Round in 2004, bowing out to Andover Town. They have the chance to better that this coming weekend, as they face a trip to this year's surprise package, Wolverhampton Sporting. The team represent Leighton Buzzard - home to Kriss Akabusi, Frank Bruno, Darren Gough and Bob Monkhouse at various points. The town has also contributed musically, with groups The Barron Knights and Kajagoogoo formed in Leighton Buzzard. 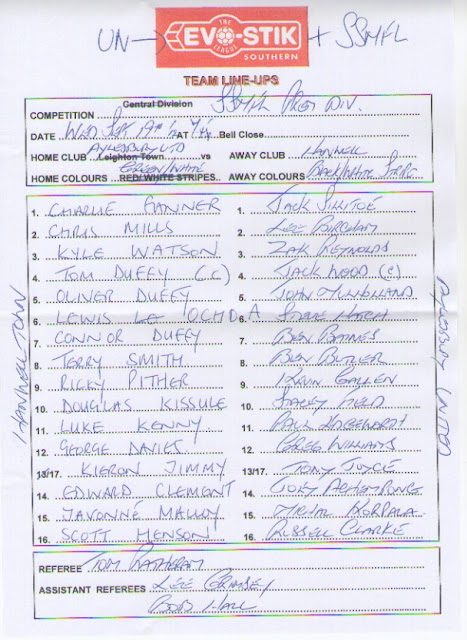 My mate Anwar is a keen football fan and groundhopper like me. Normally we go to most Wycombe games, and always meet up for a chat. However, we like to do others and last week he suggested that we go to an Aylesbury United game as they were playing at Leighton Town and it would be a new ground. I was too tired from working long hours at work. But this week I had a bit more time off and so we decided to go to the game v Hanwell Town.

On the day I left home at 6.15 and got to Anwar's in Aylesbury by 6.50, the only bit of traffic coming near where I picked him up. As well as the social aspect, the fiver he chipped in for fuel was most welcome and helped bring the cost of the day down. After a hassle-free journey, we got to Leighton around 7.20 and after a few quick pictures of outside, we went in. This was where the costs were not so good, £7 was expensive for this level, but it normally included a programme. Not tonight though, owing to a cock-up at the printers. Cheekily, they still charged full whack, but in their defence, I later wangled a team sheet from the boardroom, which although not as good, was at least something.

After a walk around the ground and some more pictures, I got some chips for the wallet-friendly price of £1 and they were pretty decent, even if there wasn't much choice of sauces. It was soon time for kick-off and we picked a place to stand and started discussing grounds we fancied going to. Possibly coming with us in the future is Ryan Eyre, nothing to do with a dodgy airline, but a good lad banned on false accusations from Wycombe. Corby and Nuneaton were suggestions, and surprisingly it wasn't much extra in terms of miles or journey times to go via Aylesbury and pick Anwar up. As for the game, it was a fairly routine 2-0 victory for the hosts. Aylesbury United featured former QPR forward Kevin Gallen in their lineup and they controlled the game throughout. It was Gallen who came closest in the first half with a 25-yard effort that whistled wide, but it was goalless at the break. Stacey Field gave Aylesbury the lead minutes into the second half when he beat the offside trap and finished from close range. Jack Mulholland got the second, heading home powerfully from a corner to seal the win.

Overall, despite the pricey entry, it was a good night. To be honest it felt like an away game for both sides with no Aylesbury signage or presence around the ground. I can only hope that Aylesbury United returns to the town soon, as they would attract excellent support and had a smart facility at their old Buckingham Road ground. And I have a soft spot for the club after doing work experience there in 1996, a very friendly club and my most enjoyable job ever. Anyway, after a nice journey home I was back by 10.30 and after a quick look on the net and watching Corrie, I went to bed as I was up early again. 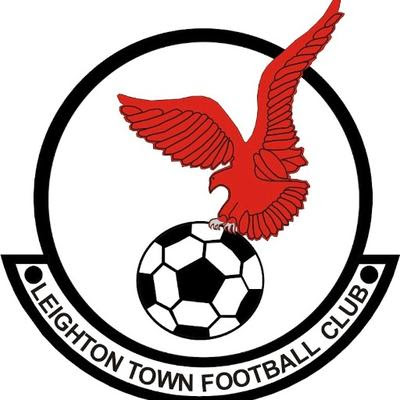 I'd not done a groundhop with Anwar in 6 weeks due to a variety of factors, so one was long overdue. With him going to Arsenal on Wednesday, he didn't want to go far and so it looked like a revisit was on the cards. The three that he suggested to me were Hemel Hempstead v Chelmsford City, Biggleswade Town v Hereford and Leighton Town v Cockfosters. My first choice would have been Hemel, but as it turned out that the ground was closer to me than it was to Anwar. Leighton Town was my next choice and thankfully I passed right through Aylesbury on my way there. Ironically, we'd be returning to the ground that we first did together, way back in September 2012. It would never have happened if Anwar hadn't randomly asked me if I fancied going to Aylesbury United v Hanwell Town, but I'm glad that he did. In the intervening 5 and a bit years, we've racked up 177 grounds with me driving, plus many more where we have met at the game. The grounds were drying up though, and from a best-ever 52 during the 2014/15 season, we'd only managed 12 this season and only 2 in the last few months. With many grounds not hosting games in midweek, due to playing in small leagues, the nearest options were often 100 or so miles away which meant a late and often pricey night for both of us. Add to that the usual miserable weather at this time of year and the choices were even more limited.

The game of the day came and it was my usual day off, with me getting a reasonable night's sleep and waking at around 8am. After having breakfast and getting ready, I walked downtown at 10.30, picking up my train tickets for my upcoming trip to Kidderminster at the weekend. I picked up a few things in town before meeting my Dad. We popped to Lidl where I got some things for lunch as well as a few cans for the weekend. After coming back home and having some lunch, I spent the afternoon at home doing research for this and other blogs. There were plenty of games being called off all over the country, but thankfully with the weather being dry, ours was not one of them. After having a Paella for dinner, I left at 6.15, not best pleased to hear rain outside. Thankfully, it quickly disappeared and despite a slow start, it was a decent journey over to Aylesbury. I picked Anwar up at 6.45, with it taking ages to get out of Aylesbury thanks to some poorly designed junctions. We soon got going though and by 7.20 we were at the ground. The car park at the ground was not great, minuscule spaces and not many of them at that. Thankfully, there was a Morrisons across the road with plenty of space and 3 hours of free parking. Entry was £6, good value and £1 less than I’d paid to see Aylesbury United at the same level 6 years ago. 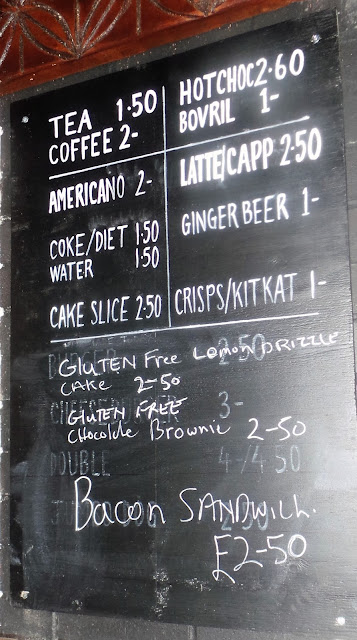 I also picked up a programme as they were only £1. The ground had gone a bit downhill since my last visit, with areas taped off and the range at the tea bar scaled back. The Spartan South Midlands League always provides us with a good game but despite a lot of great crosses being put in by the hosts, the Cockfosters keeper wasn’t really being tested. A heavy pitch didn’t make for ideal conditions, but Leighton Town took the lead just before halftime with a nice ball into the box and a tidy finish from 12 yards by James Hatch. Cockfosters improved slightly in the second half and they got the equaliser on the hour when centre-back and captain Ian Salt headed home from a corner. This led to the visitors having a real spell of dominance, but they failed to capitalise on this. The game soon swung back in favour of Leighton and it was the hosts who got the winner on 70 minutes. Cockfosters failed to clear their lines following a spell of pressure and the ball was poked home from just inside the area by Hatch to complete his brace. There were chances to make it 3-1 to the hosts with the keeper making a good save to tip the ball over the bar and a defender clearing a shot off the line, but it wasn’t to be. In the end, the scoreline was a fair reflection of a decent night’s football in front of an attendance of 93.

It was around 9.45 by the time we got back to the car. The radio brought good news for us with the two teams in and around Wycombe - Notts County and Newport County, losing to Crawley and drawing with Morecambe respectively. As for the other games we were considering Biggleswade v Hereford had been called off earlier that day and Hemel Hempstead beat Chelmsford City 3-1. We'd been happy with our choice and the journey home was a lot better. I dropped Anwar off at 10:05, getting home myself at 10:30. After staying up until midnight, I went to sleep, although with me up for work at 4 am the next morning, a nap was needed the following afternoon. 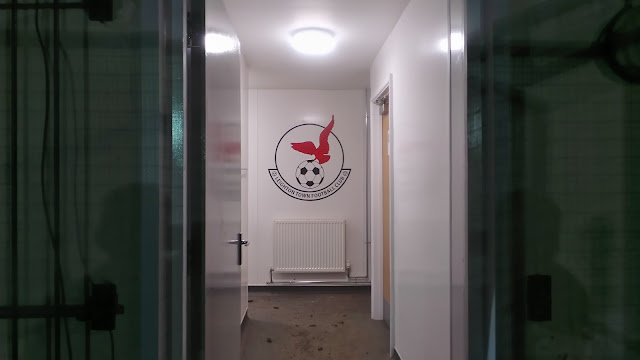 BELL CLOSE is a fairly decent home for Leighton Town, but really doesn't feel like home for Aylesbury United, despite the fact that they have been sharing there. There is a nice club bar which hasn't really got much in the way of real ales or ciders which is a shame. There is no club shop for either club to my knowledge. The tea bar is OK, with Bacon Sarnies, drinks and cakes. The ground is nearby the town, and that is probably your best bet if you want a good drink, there is a Morrisons with a cafe opposite the ground.

As for the main ground, 2 sides are open to the elements. Firstly behind the goal where the bar is. And then part of the side to the left, although most of it is closed due to the local cricket club sharing the ground. The other side has a decent sized seated stand holding around 200, with the rest open standing. At the other end is a fully covered terrace, holding at a guess around 600.

1: Ground facilities & condition (for the level)
Not as good as my first visit, but still decent (6)

7: Game entertainment
A decent night’s football on a tricky pitch (7) 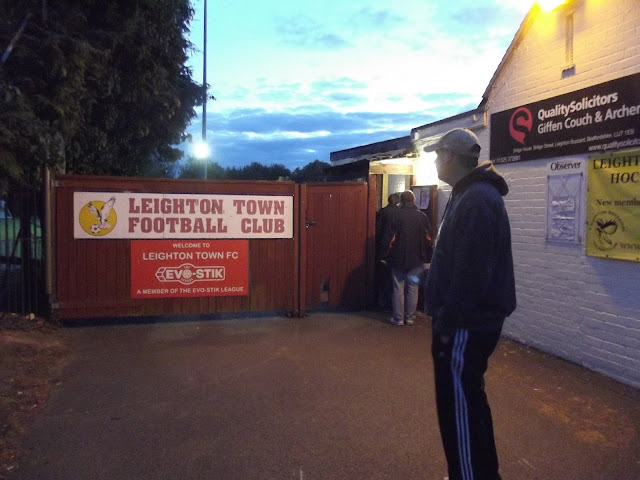 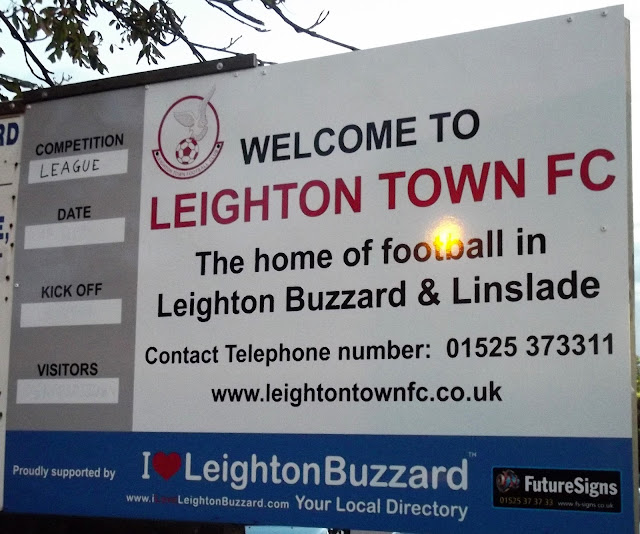 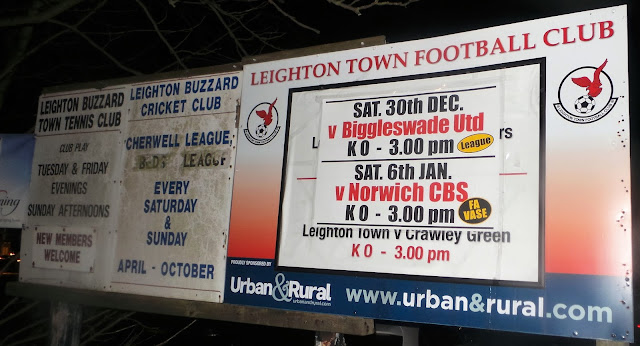 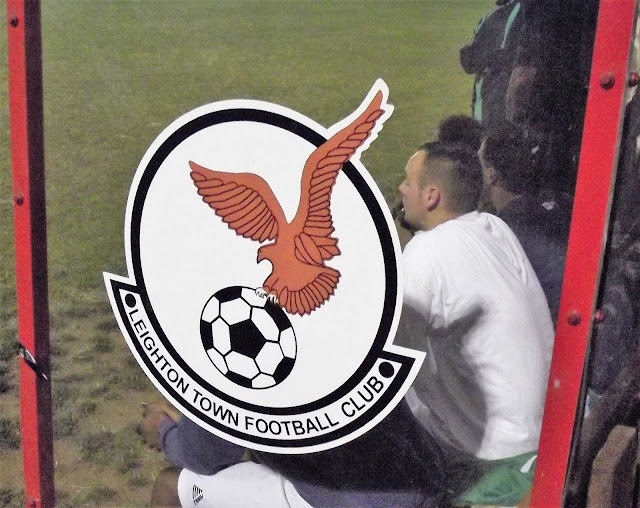 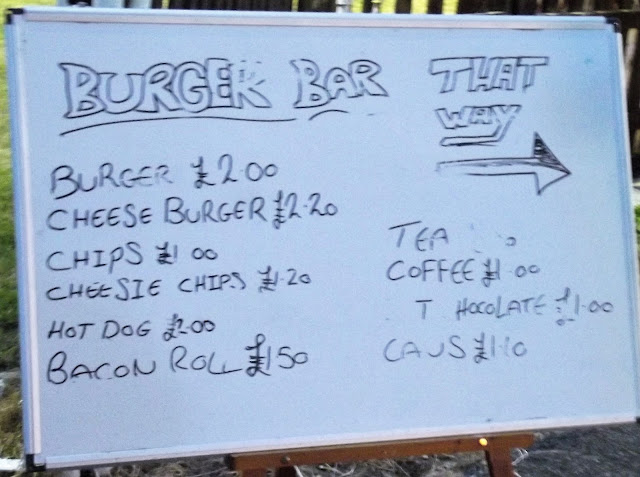 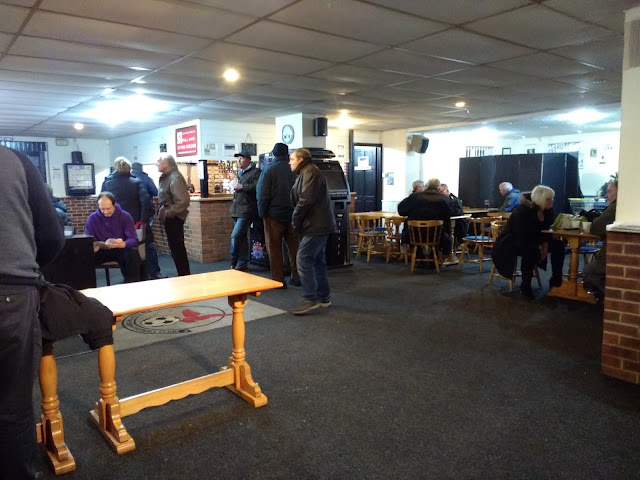 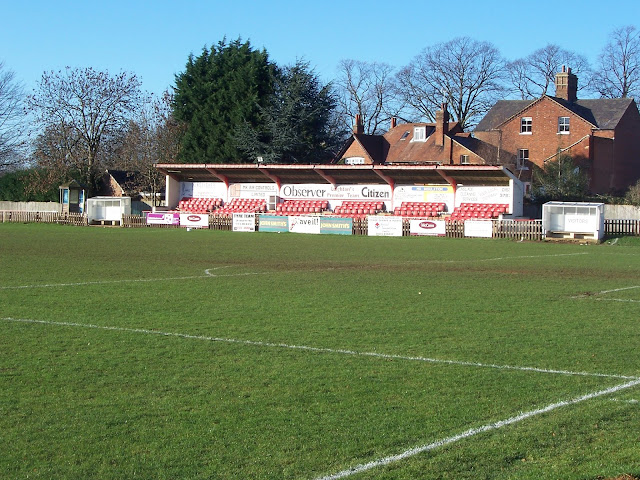 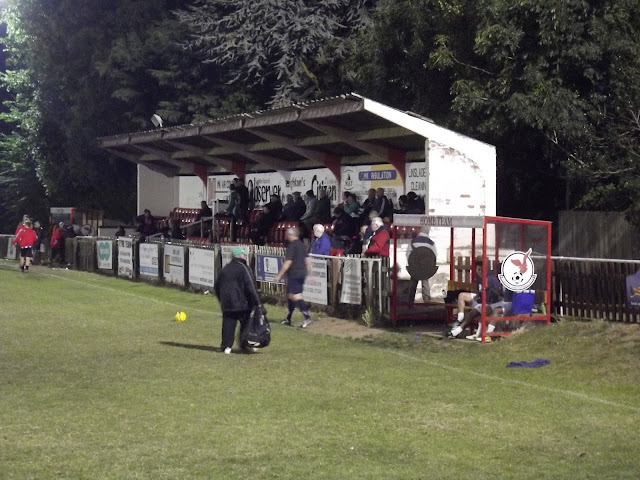 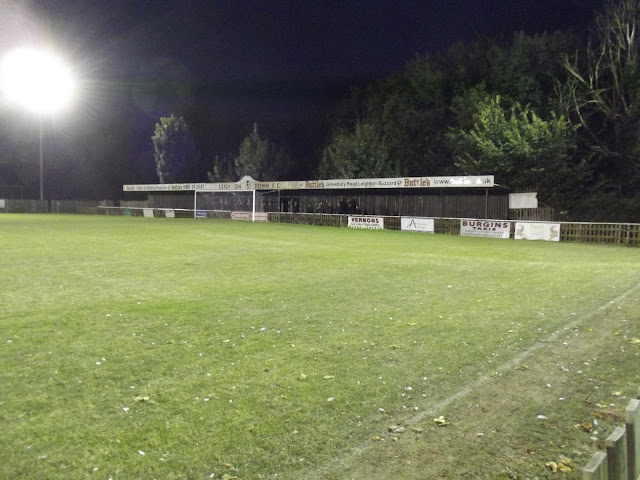 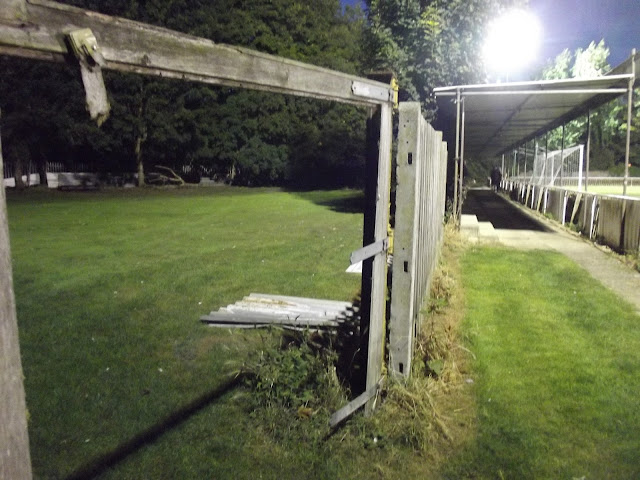 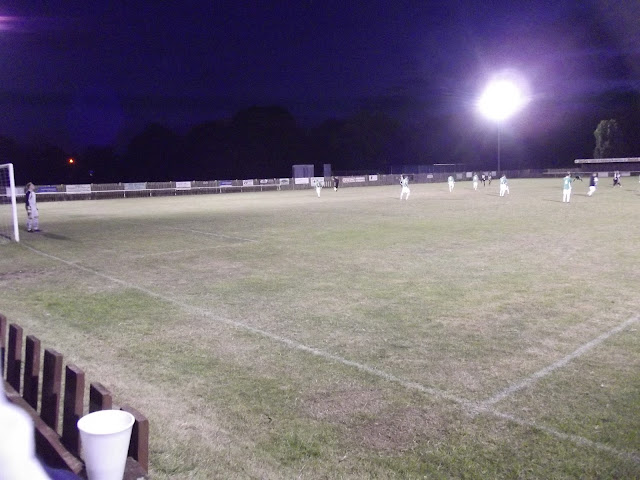 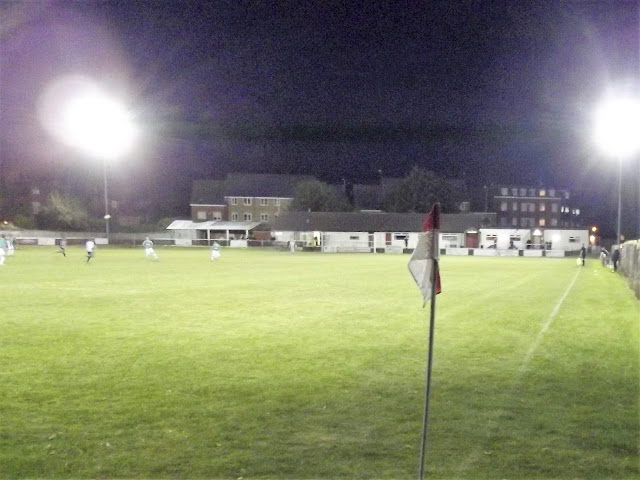 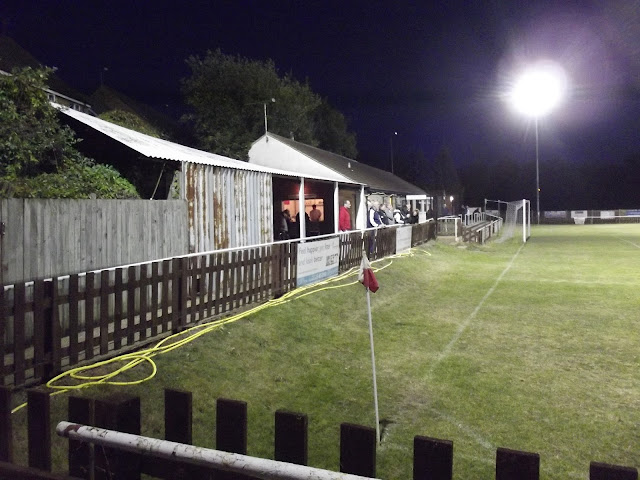 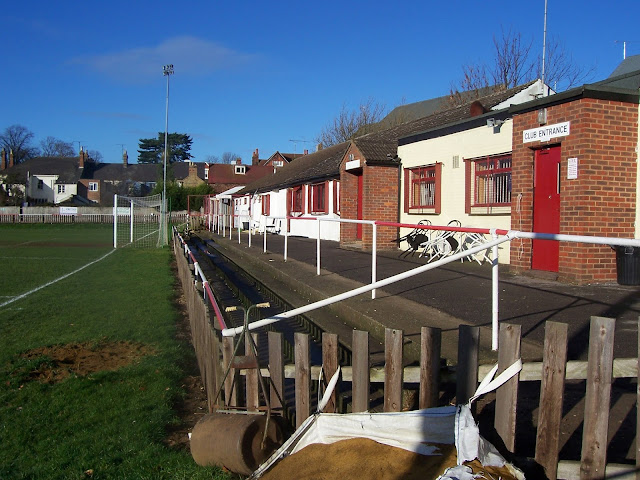