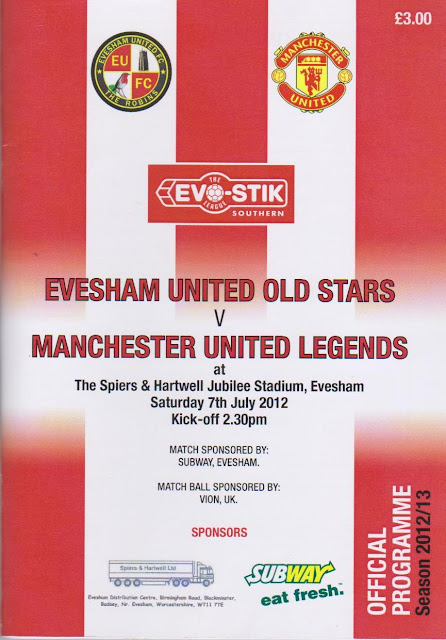 I was initially planning to go to the opening of Maidstone United's new ground next Saturday, but tickets sold out before I even knew about them, leaving me disappointed. But then I saw that Evesham United had a new ground too, and that tickets were available on the day. This was all back in May, not long after last season had finished, and true to form the new season took absolutely ages to come round, in my mind at least. But eventually I got there and it came to the morning of this game. It had rained a hell of a lot over the past few days and I thought I would have to delay the start of my season even longer. I tweeted Evesham United and got a reply that the match was on, so I got on my way. Even then, on my journey I was sceptical, it hammered it down as I was driving through Oxfordshire on the way to the game The trips to Evesham, Hereford and the like are always frustrating, because after getting to Oxford it is single track roads all the way to your destination. And you always get stuck behind some tool that drives at well below the speed limit and leaves a trail of traffic in his or her wake. In the end it took over 2 hours to do 80 miles, despite covering about 35 of them in the first half hour. 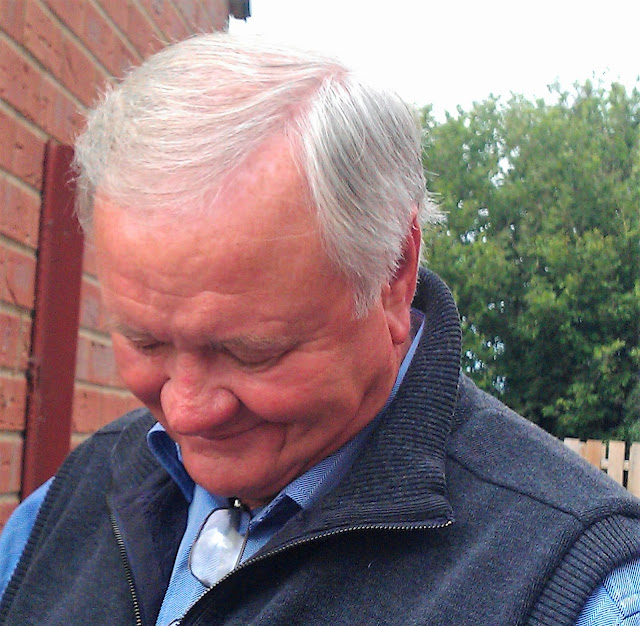 Eventually, I arrived in Evesham to fairly bright sunshine with a couple of spells of light drizzle and was pleased to see no mentions of the game being off on Twitter. I decided to have a look around the town and it was pretty decent, even though my first encounter was with a gipsy trying to force 'lucky heather' on me. I politely told her where to go before carrying on with my day. I didn't buy much, mainly a few drinks for footy, including a 4 pack of pear cider for at the game (well 2 cans anyway) At £2.29 (or £1.15 for the cans I had, it was far cheaper than the bar at the ground and more convenient. I got to the ground around 1.20 and after taking a few pictures of the outside, made my way into the ground. Entry was £10, plus £3 for the programme, which I didn't begrudge paying, seeing as it was a special occasion. Evesham United were returning to the town after spending 6 years in exile at Worcester City, 15 miles down the road. After great work by the committee at the club and staunch loyalty from the fans, their dream is finally realised, and a nice stadium for this level too, but more of that later. When I got into the ground I was greeted by the bloke selling the programmes, he said thanks for coming, which was nice. He knew who I was as I had my Wycombe polo shirt on and had messaged the club a couple of times to find out more about the day. This is what makes non-league football so brilliant in my opinion. I took some more pictures of the inside before getting some chips and settling down at the back of the covered standing with my paper and a couple of cans of cider. By the time I had finished all those, it was time for the teams to be announced. I only recognised one for Evesham - striker Simon Brain who played for Hereford in the early 1990's. Manchester United meanwhile had a side packed full of stars, and although Andy Cole and Bryan Robson didn't make it, there was still the likes of David May, Dennis Irwin, Arthur Albiston and Sammy McIlroy who had served the club well over the years. Add to that a host of players that had done well at other clubs and you had an impressive team. 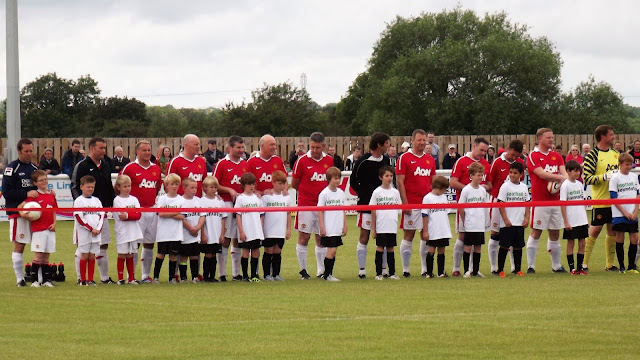 At around 2.25 the two teams were brought out onto the pitch, and after various speeches, it was left to Ron Atkinson to have the final say and officially open the ground. The game itself wasn't great, being a typical pre-season friendly and a far cry from the excellent Wycombe v Reading legends in my last game which ended 8-2 to the Chairboys. For the record, Man U took the lead through 2 quick goals just after the 10-minute mark - Clayton Blackmore and Andy Ritchie with simple finishes. Rob Candy did pull one back for the home side after rounding keeper Frazer Digby, but United scored 2 more through Blackmore again and Deniol Graham. They were good value for their lead and could have had more, but it remained 4-1 as the half time whistle blew. The second half was a bit of a non-event, with no more goals and the game petered out. Although it hadn't been a great game, I enjoyed my day out and it was good to get back to getting out for games again. Getting home was a little bit easier, I shaved half an hour off my journey time as the roads were less busy, getting in just after 6PM. 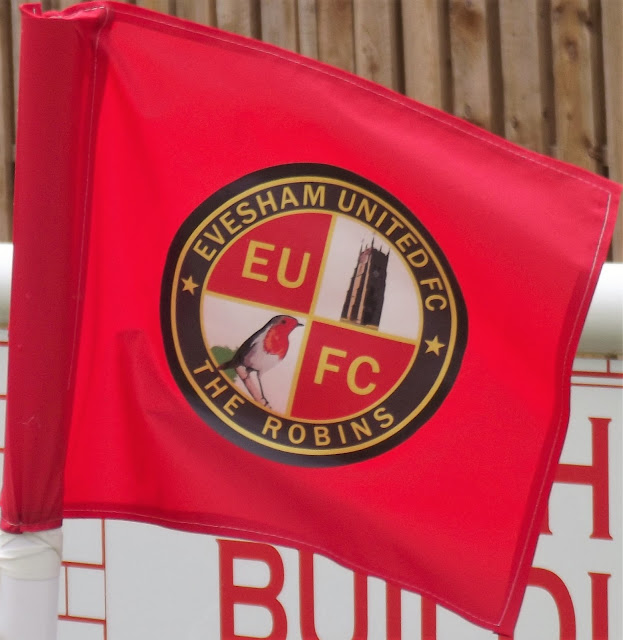 JUBILEE PARK is a smart modern stadium, fit for Evesham's current level at Southern League Division 1 South and West. The stadium was built with the community in mind, with several pitches for the junior teams, although today, these were used as a parking area. There is a smart modern bar and conferencing facilities, all decked out with newspaper cuttings and team photos from down the years. The ground itself boasts an impressive 300 seated (approx) stand, with flat standing all around. There is a decent sized bit of covering behind one goal to protect fans from the rain. There was no club shop to my knowledge, but they did sell pin badges for £3 a pop. The tea bar was as you would expect from a football ground, it was nice to get chips though, as they are not available everywhere. 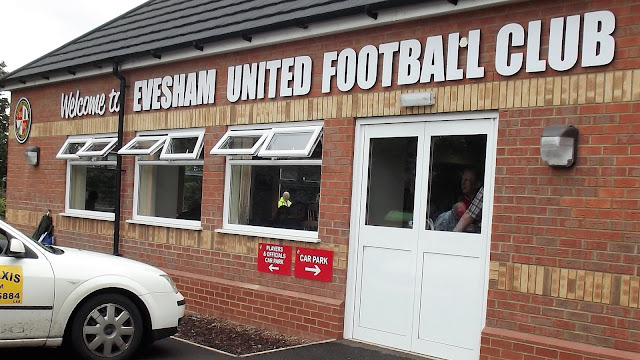 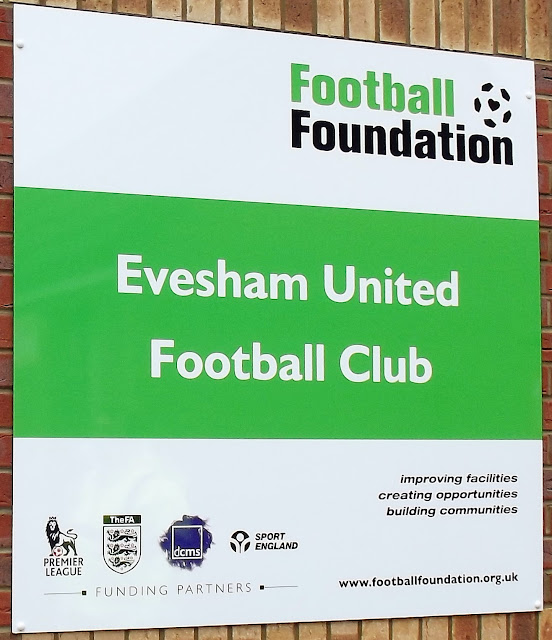 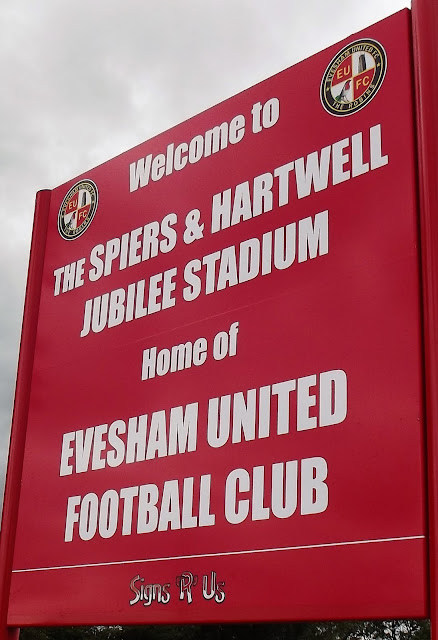 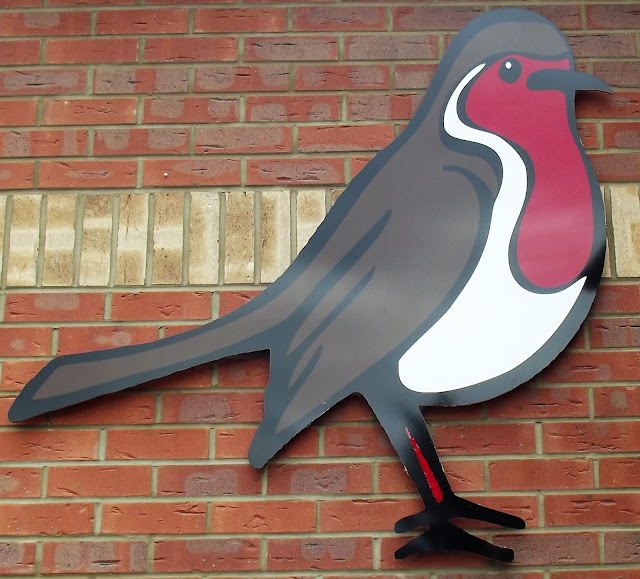 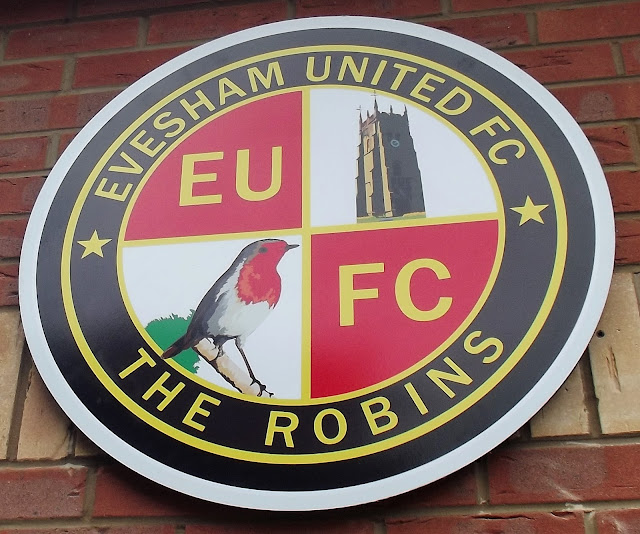 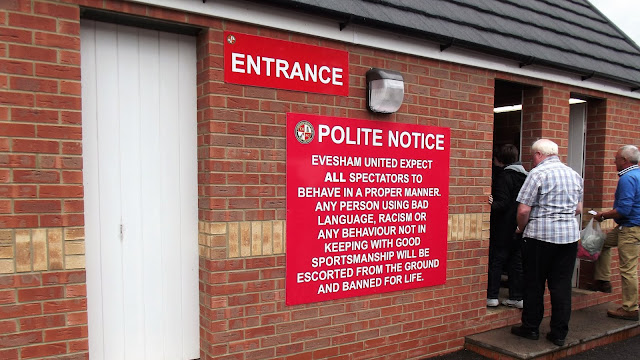 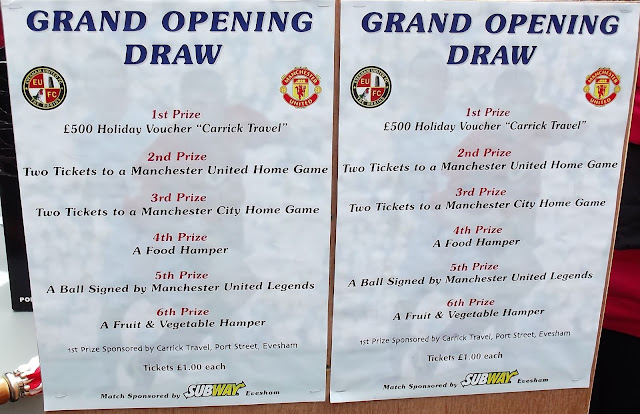 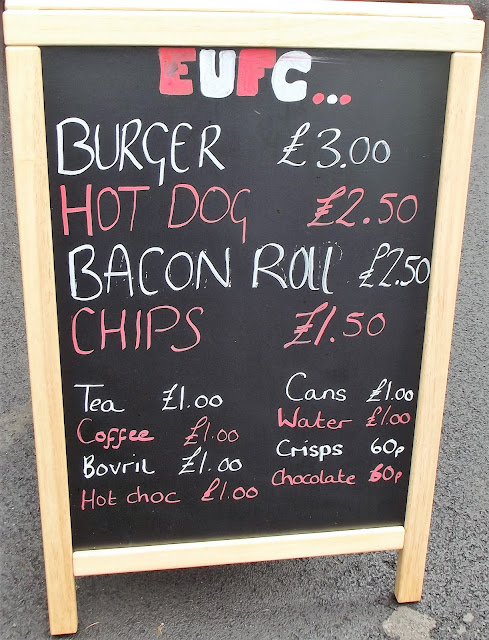 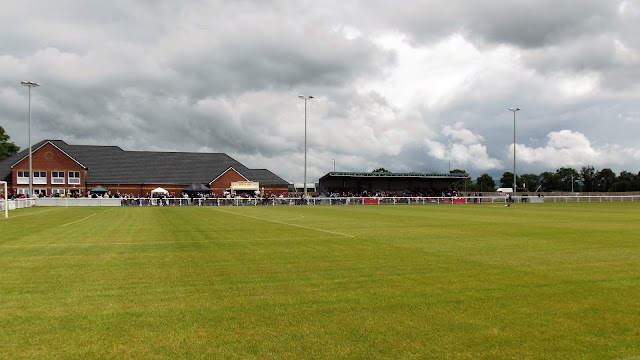 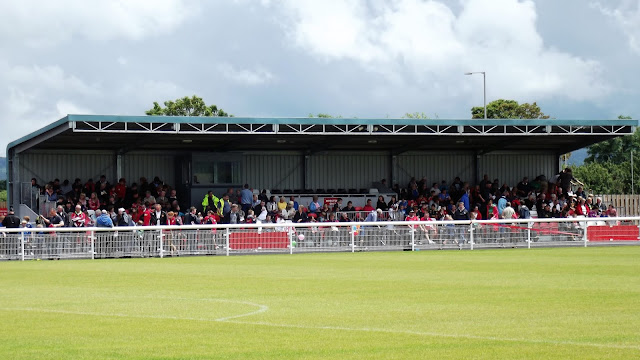 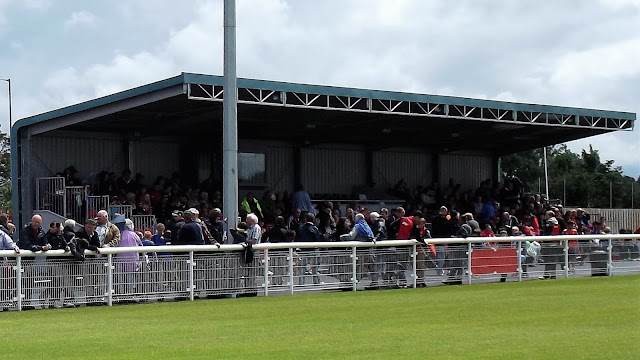 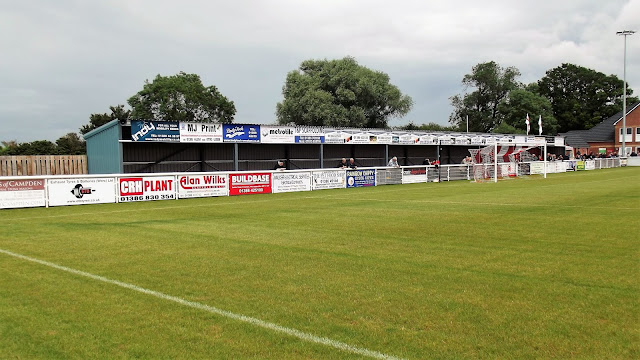 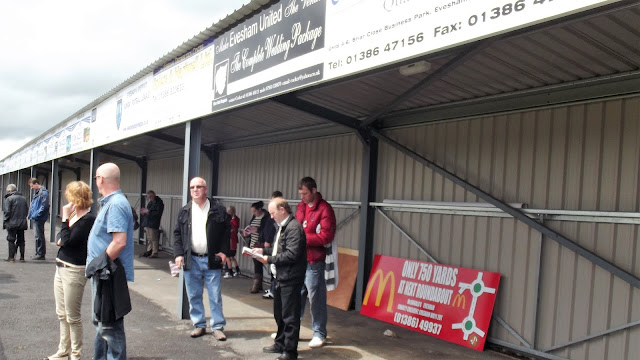 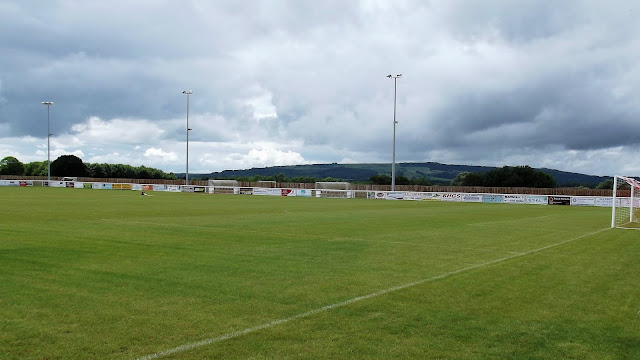 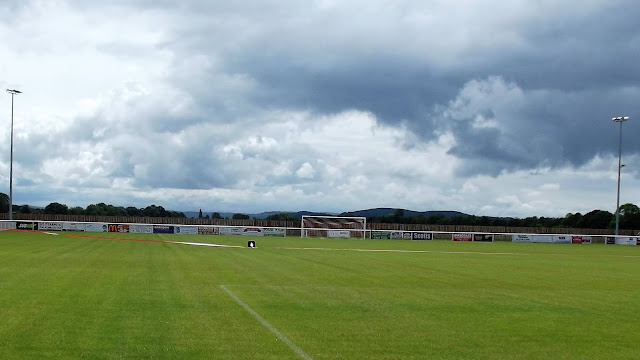 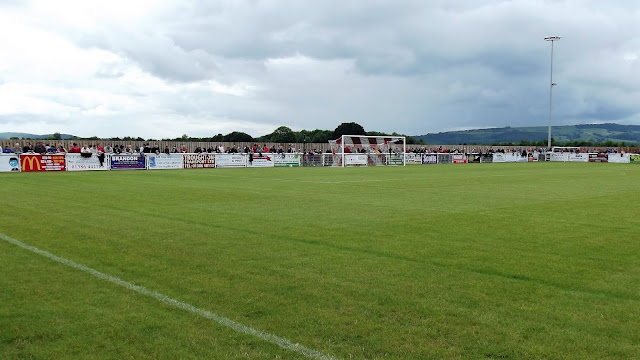