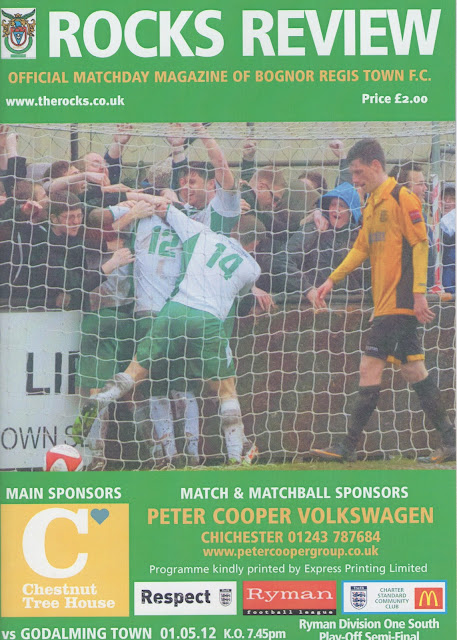 As I had a couple of days off, and the season was quickly coming to an end, I decided to take the opportunity to do a game. Initially, I had a shortlist of 5 - namely Totton, Woodford, Bedworth, Tilbury and Bognor. Eventually, I narrowed it down to 2 games - AFC Totton v Bedford Town and my eventual destination, the game being in the Ryman League Division 1 South Playoff Semi-Final, between 2nd placed Bognor and 5th placed Godalming - the visitors surging into 5th place after a good run of form towards the end of the season. The other semi-final being between Dulwich Hamlet and Folkestone Invicta who finished in 3rd and 4th place respectively. Ironically it was a review of Bognor's ground on Dulwich fan Mishi's blog which made my mind up on where to go.

I had previously gone to see Godalming Town earlier in the season for their 2-1 victory over AFC Wimbledon in a pre season friendly. They included former Wycombe youth player Jamie McClurg in their ranks. As for Bognor, I don't recall ever seeing them play in my 20 plus years of watching football. They did however play a pivotal part in Wycombe's history - Wycombe's win at Bognor sealed the Isthmian League championship in the 1986/87 season in which they finished with a record 101 points from 42 games. This was 5 years before I started watching Wycombe and it was a shame I had to miss out on all the fun. There is a comprehensive report of the game and article of the season at the excellent site Chairboys On The Net Another memory of Bognor is from the TV Sitcom Steptoe and Son where Harold took them on a foreign holiday which proved to be a disaster. Albert who had wanted to stick to their usual holiday kept saying "I told you we should have gone to Bognor!" much to Harold's annoyance. 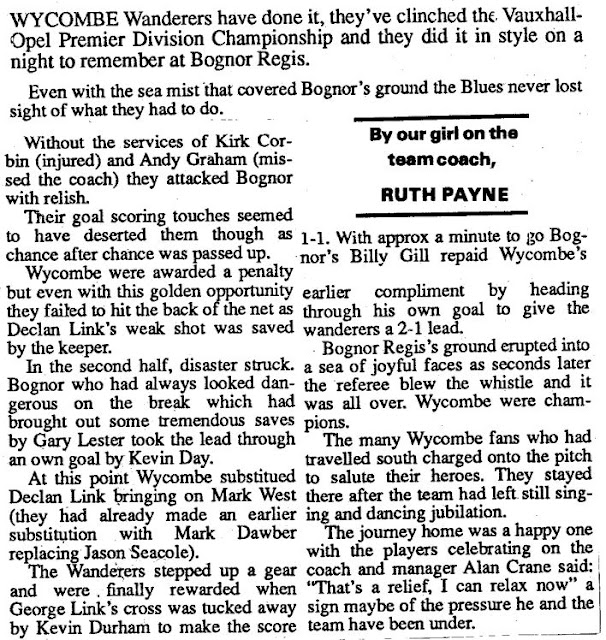 On the day I only decided where I was going around 2.30 in the afternoon and so set off just before 3. I went down to town to have a look around and get some stuff for the game. I left town at 3.45 and made my way to the first stop which was Staines Lammas. Initially, the POI file on my SatNav directed me towards Ashford Town FC and they had previously played their games at Staines Town. However the address on the site was a recreation ground and so I made my way there, It was very basic, little more than a railed off pitch and I'd imagine they would have to use another ground when playing in the FA Cup as opposed to the Combined Counties League. It was pretty well kept to be fair though. Next up was Chichester City of the Sussex League, which was pretty close to the main city centre. This was a better ground than Staines Lammas with a modern looking bar and changing rooms and an older but still decent rest of the ground. Last of all was Pagham, just 4 miles from Bognor Regis. This was probably the best of the 3 grounds, again in the Sussex League, but this time with more standing and seating areas. 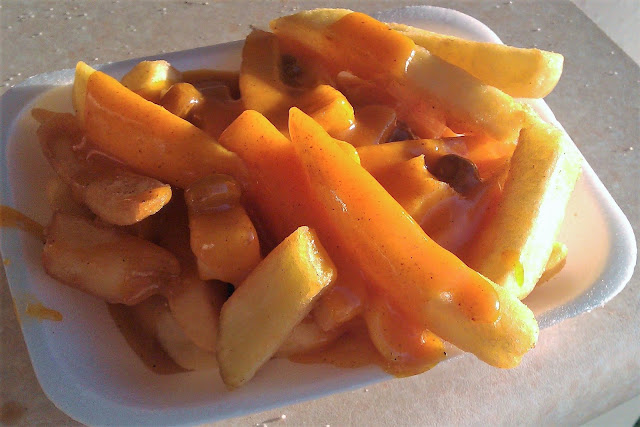 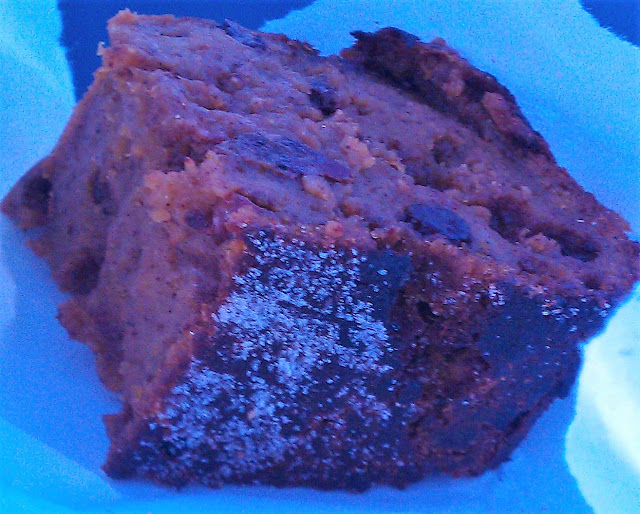 I eventually got to Bognor at 6.45 and after parking up and paying a very reasonable £8 to get in, I made my way to the club shop to see what they did. They had a decent selection of programmes but none that I fancied. I bought a small pennant for £4, a tiny little bit more than my normal cut off point for spending on a pennant (mainly to save space on my wall) but as it was of good quality and the prices elsewhere were a lot cheaper than I had expected, I decided to treat myself. After that I went into the bar and had a couple of pints of cold Thatchers Gold, one of my favourite ciders, and not too expensive at £3.20 a pint. I then went around the ground taking some photos for my collection before getting some chips, keeping in mind that I was going to do a review for the website Non League Chips in the near future. I treated myself to a second piece of bread pudding, something that Bognor have become famous for serving down the years, and rightly so, it was still warm from being cooked and was delicious at only 50p a portion. This has got to be one of the best bargains in football! Also at half time they did a crossbar challenge on the pitch for a chance for a fan to win £50. No one succeeded in hitting the bar from the halfway line though, but it was extra entertainment nonetheless. 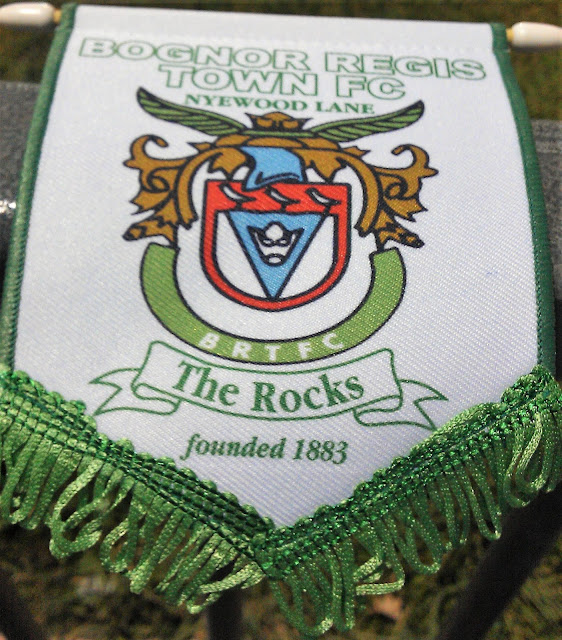 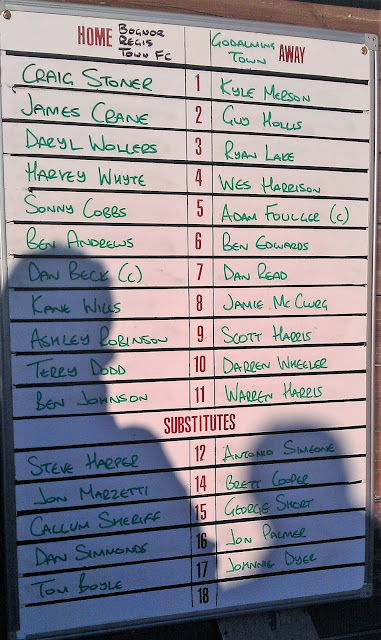 By this time it was nearly kick off time and so I found somewhere with a decent view and settled down for the game. Little did I know then the great game that was going to unfold in front of my very eyes. The game started calmly enough, with the visitors actually having the better of the opening 15 minutes. Eventually, Bognor settled though and started to dominate. They had hit the post already before they took the lead on 33 minutes through Ashley "Rocket" Robinson hitting the ball into the top corner on the half volley to give the home side a deserved lead. It was still 1-0 as the half time whistle blew and although it was no bad game, there was still no sign of the excitement was to follow.  I went to take my place for the second half. The game really came to life on 63 minutes when ex Wanderer Jamie McClurg scrambled the ball over the line for Godalming's equaliser. Then after getting back into the game, they went ahead on 73 minutes, a good goal from Brett Cooper turning the game around. Shockingly the game was turned on it's head again as goals on 75 and 76 minutes from Robinson and Dodd put the home side back ahead. At that point, I was really enjoying the game and praying for a Godalming equaliser to take it to extra time. And I got my wish, on 92 minutes when Godalming's captain Foulker finished neatly to take the game into extra time and penalties. Warren Harris looked to have sealed it for Godalming on 97 minutes when his shot was deflected in. But the same player was to quite literally have a hand in Bognor's equaliser as his handball on the line on 103 minutes got him sent off and Bognor were awarded a penalty. Ashley Robinson kept a cool head to get the equaliser and his hat trick. That was the way it stayed until the end, and a dramatic game was ended with a dramatic penalty shoot out. All kicks were converted until Ben Edwards' penalty for Godalming was excellently saved by Rocks keeper Craig Stoner. In the end, it was down to home player Ben Johnson to calmly step up and put Bognor into Sunday's final against Dulwich Hamlet, who triumphed in the other semi-final, beating Folkestone Invicta 2-1. Sadly my phone battery died filming the penalty shootout, so I didn't get any footage of what was a great game. My batteries certainly weren't drained and I was still buzzing on the 90-minute journey home, eventually getting home at 12.15. 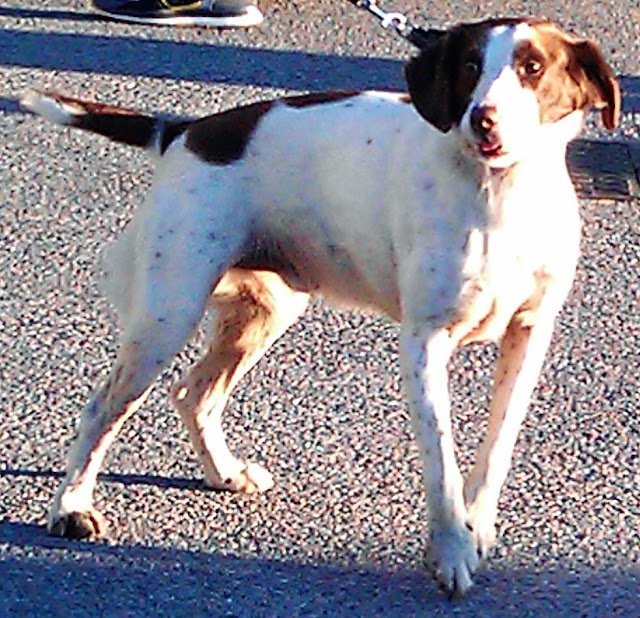 NYEWOOD LANE is a pretty decent Ryman League Ground. With seating for around 300 down one side of the ground, along with some covered terracing, the opposite side and the far goal are also under cover. The only open terracing is at the clubhouse end, and even then it is of a decent height to ensure a good view. If it does rain then there is plenty of cover to accommodate most crowds that they would get. I know that the ground is fit for Conference South football, it was not long ago that they played in that division, winning the "Best canteen in the Blue Square South" award for both the 07/08 and 08/09 season. And indeed it is well deserved, as described earlier. The bar and club shop are also some of the better ones in the game, so I would wholly recommend a visit there if you have not been before. I'd certainly have no issues with going again should the opportunity arise, even though I would prefer a new ground. And if you like 1980's band Wham!, you are bound to enjoy your visit here. The club anthem appears to be "Club Tropicana" and they also play other stuff from the band too. Most of their songs are upbeat, and that was exactly how I felt after my visit here. 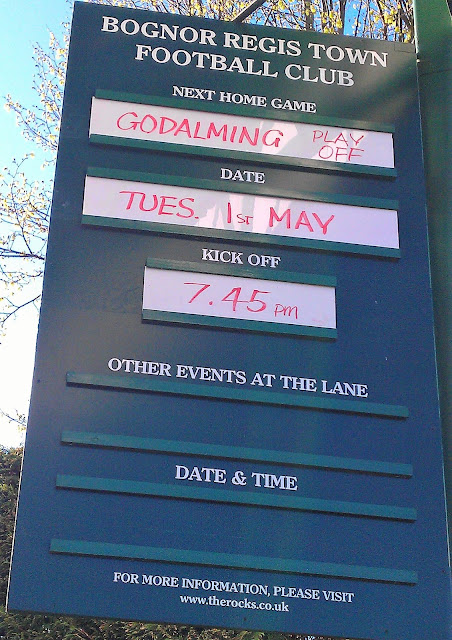 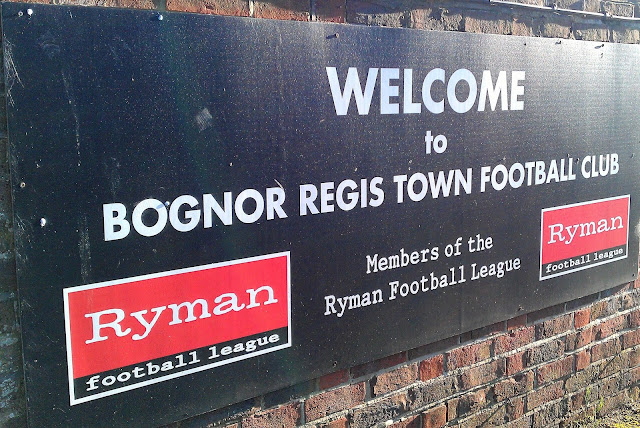 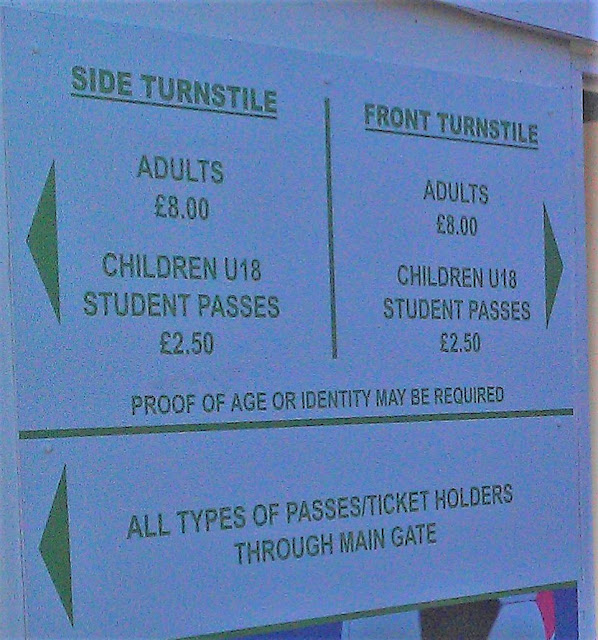 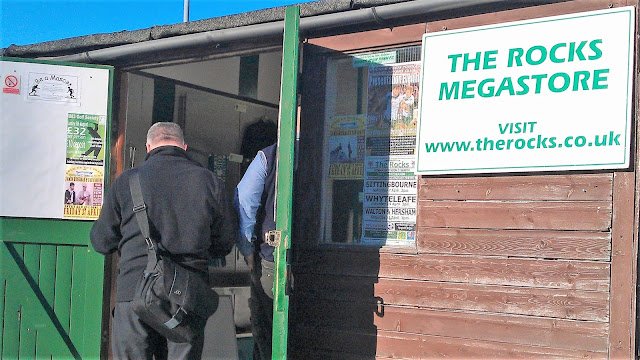 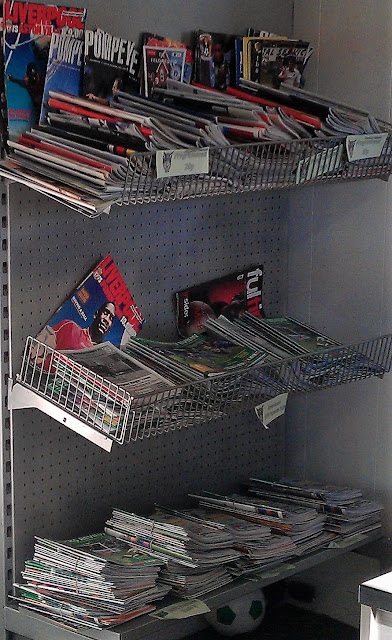 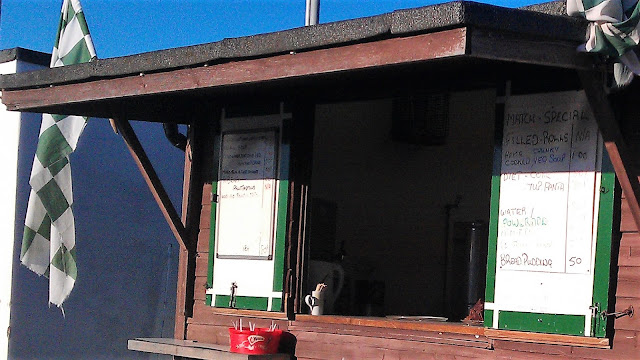 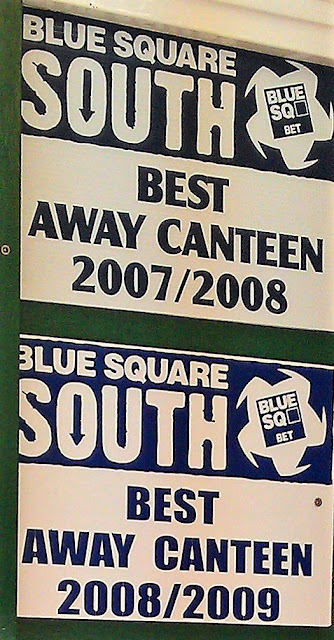 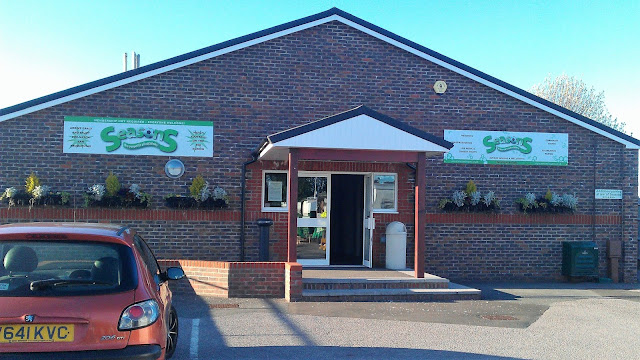 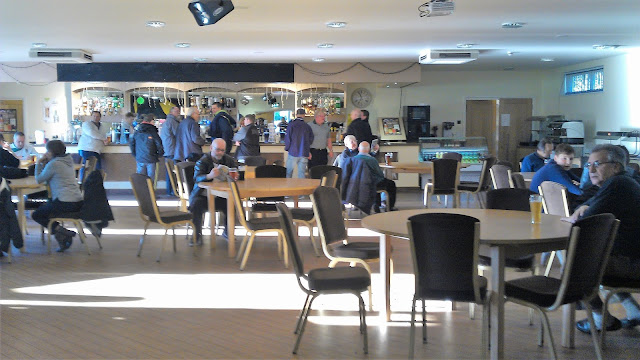 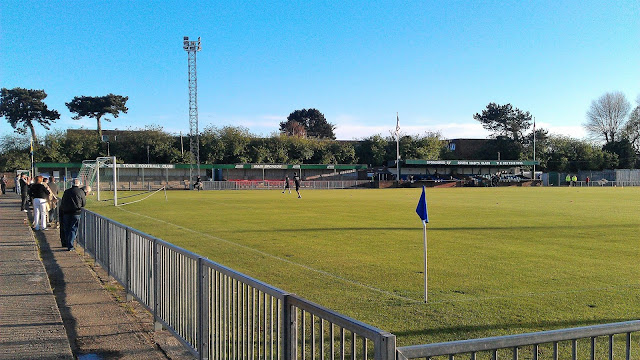 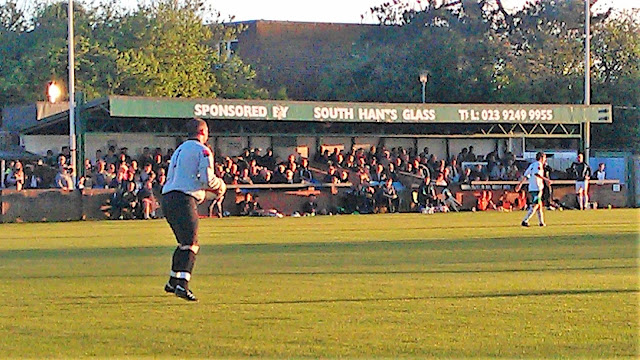 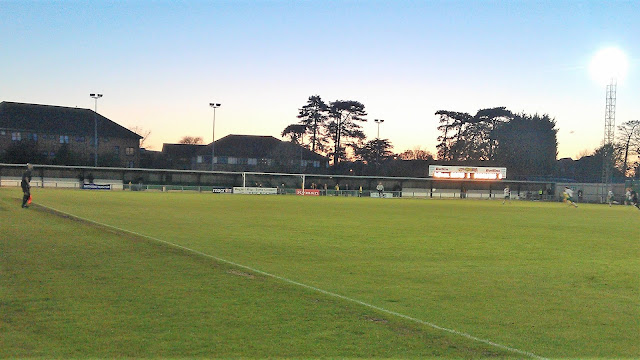 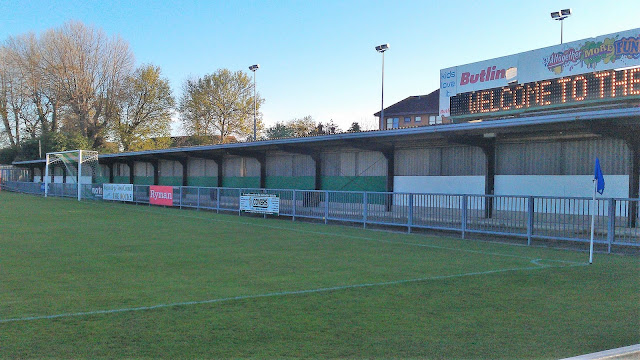 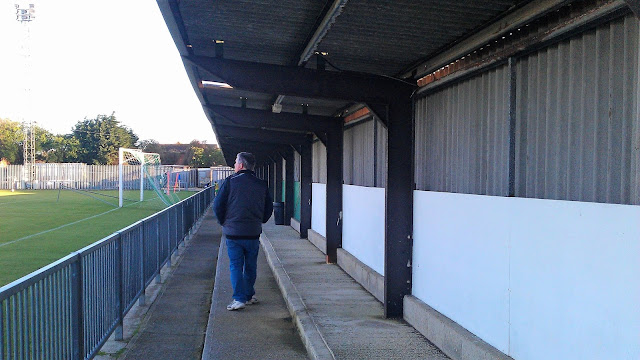 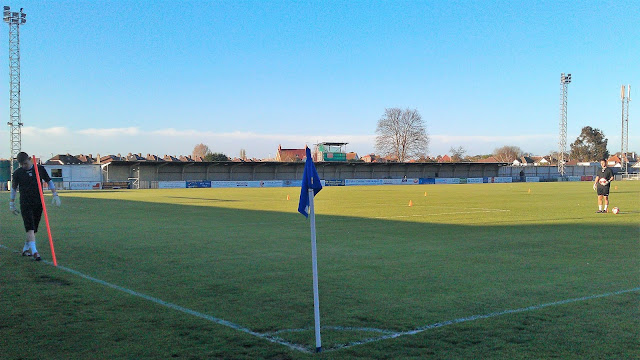 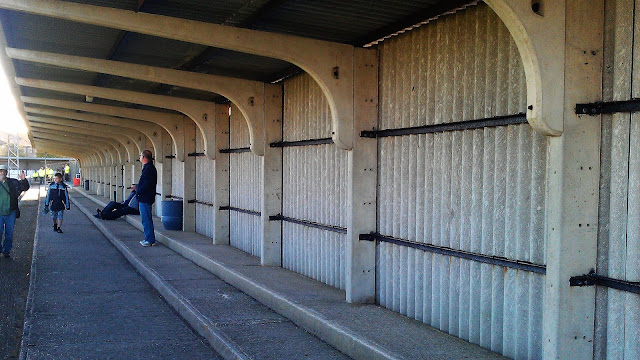 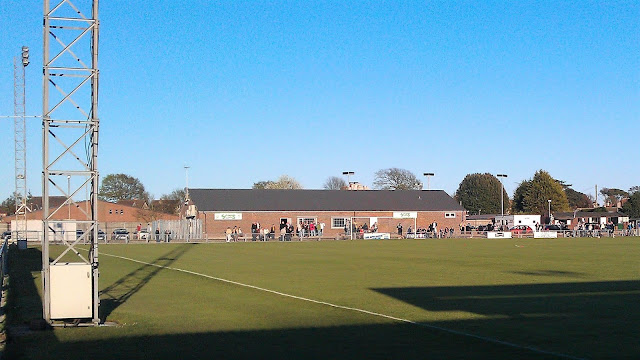 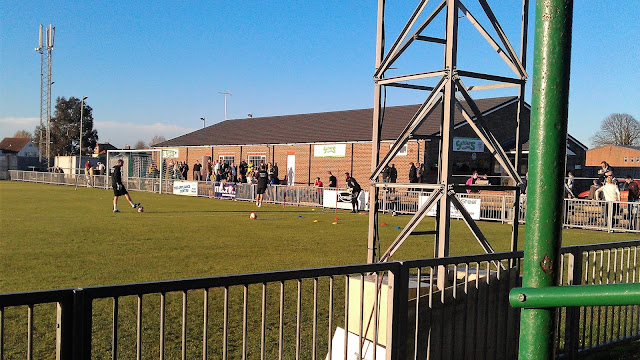 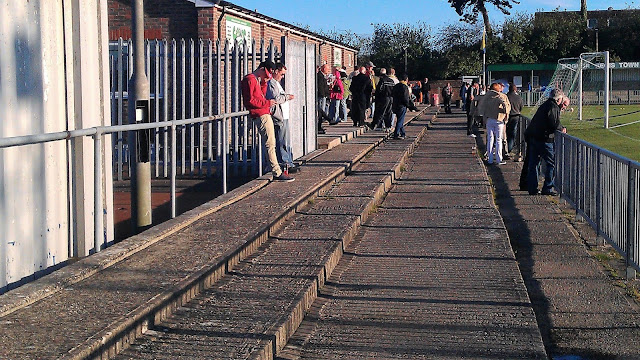