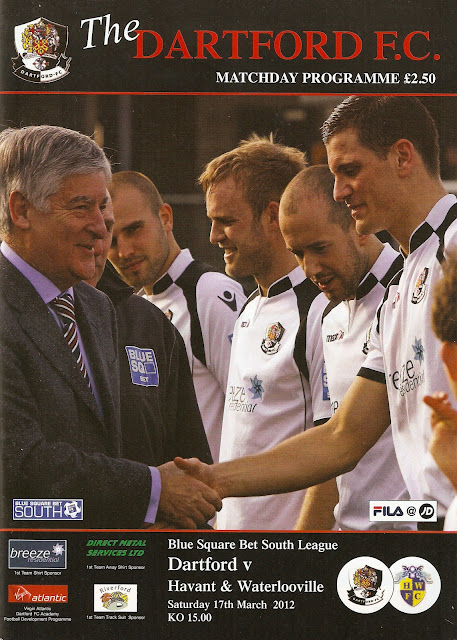 I had been planning to go to Bury v Wycombe on this day. But due to a combination of factors, the main ones being that I would do a lot of travelling over the coming week and also that I couldn't get enough people to make driving up worthwhile. So I had to sort an alternative - a Saturday in the season without going to a game would be shocking. I had a number of options I was considering - from helping out on the turnstiles at Wealdstone's FA Trophy Semi-Final game v Newport County, or going to Brackley Town v Weymouth. But I decided that I wanted to tick off a ground in the Conference South. It was down to Eastleigh v Dover or Dartford v Havant and Waterlooville, both roughly around the same distance away, in the end, it was the programme shop that I had heard about that swung it for Dartford. On the day I decided to leave about 11am and visit a couple of grounds on the way, as well as going into Dartford town centre. So on the way I went to Kings Langley FC near Watford, this season being the clubs first in the FA Cup, hence them only just falling under my radar. And another new ground for this season, Enfield Town, who moved into the Queen Elizabeth II stadium earlier this season. I got to Dartford at around 1PM, parked up and walked the 5-10 minute walk into the town. After getting some chicken for lunch and a huge carrier bag full of grapes for £1.50, I made my way back to the ground, arriving back at 2.15. 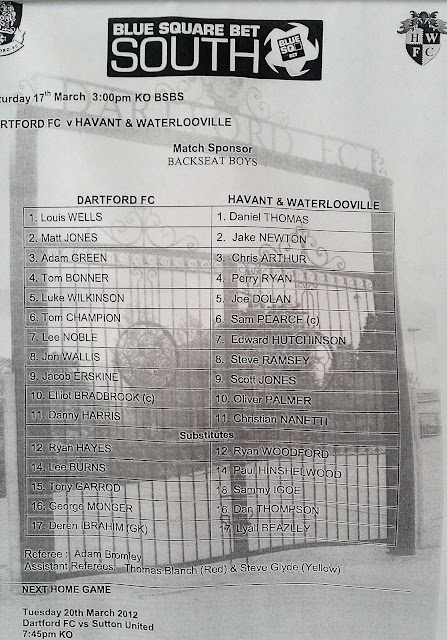 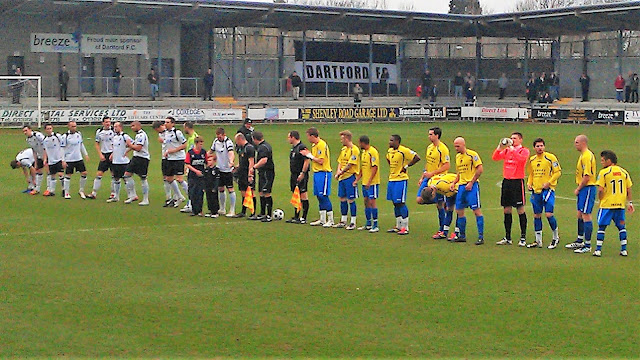 I chucked my stuff in the boot and went in the ground, entry was a reasonable £12 and a decent sized programme was £2.50, with plenty to read, certainly the most impressive one I have seen in Non-League this season. I went to the club shop, which although impressive, didn't have any pennants for me to buy. The real gem was at the other end of the ground, a supporters association shop with an impressive range of programmes, books and fanzines to buy. I bought 5 Dartford fanzines, A "The Worst of Football" book, Dartford v Dorking programme from 2005 (a game I went to but chucked the programme) and a Northern Ventures, Northern Gains magazine all for £2. After a quick walk around the ground to take some pictures it was time for the game. I took a seat in the stand and watched the first half. Havant were the better side in the early periods, taking a deserved lead after 9 minutes through Scott Jones. They should have wrapped up the game minutes later when they were awarded a penalty, but it was wasted, being blazed over the bar by Steve Ramsey. Dartford eventually equalised before half time through Lee Noble, so the sides went in level at the break. The second half was a different affair, whatever was said in the Dartford dressing room at half time worked, as they were a different team second half. It did take until the 79th minute for them to make a breakthrough - Danny Harris the scorer. As Havant went forward in pursuit of an equaliser, they left gaps at the back, this was exploited by Dartford, who scored through Lee Wilkinson. Overall it was a decent game, if not a classic. I made pretty decent time on the way home, getting home around 6.15 after a hassle-free journey. 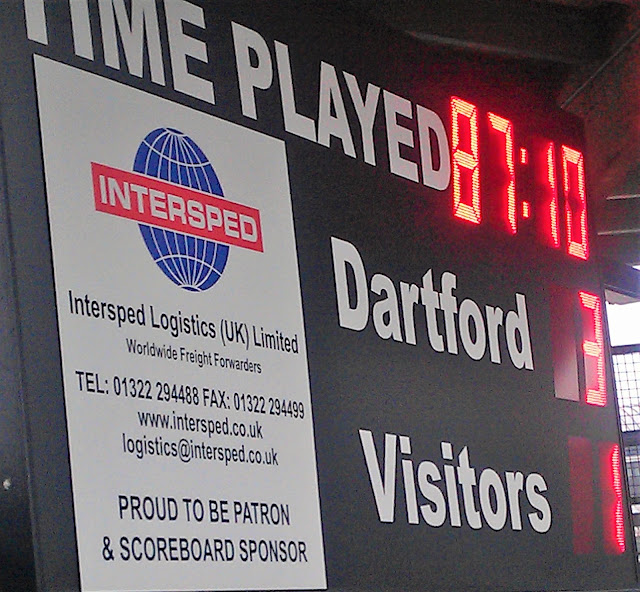 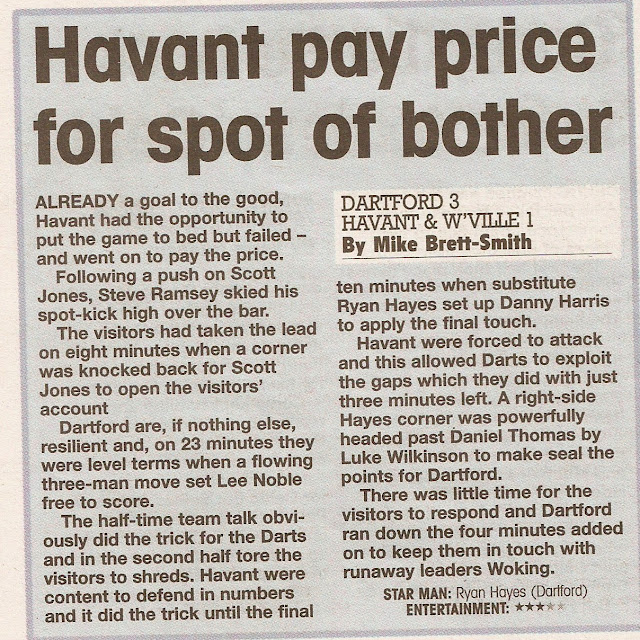 PRINCES PARK was built in 2006 and is one of the best grounds in non-league football. It was designed with the environment in mind, with several "green-friendly" features. The stadium itself is all covered, 3 sides terracing and 1 side seats, in a similar style to Burton Albion's Pirelli Stadium. It has all the advantages that a new stadium brings, as well as being nicely designed and quite unique. There is a bar at the ground, but I didn't go in. The town centre with an abundance of pubs is a short walk away, so you will be spoilt for choice. As I have already mentioned, as well as the club shop, there is an excellent programme shop, with a good range. 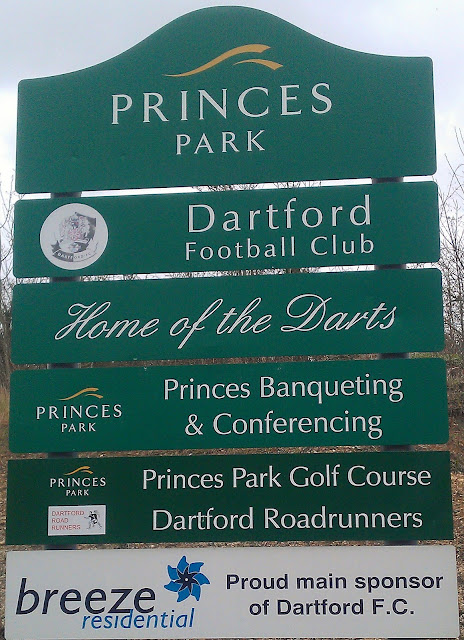 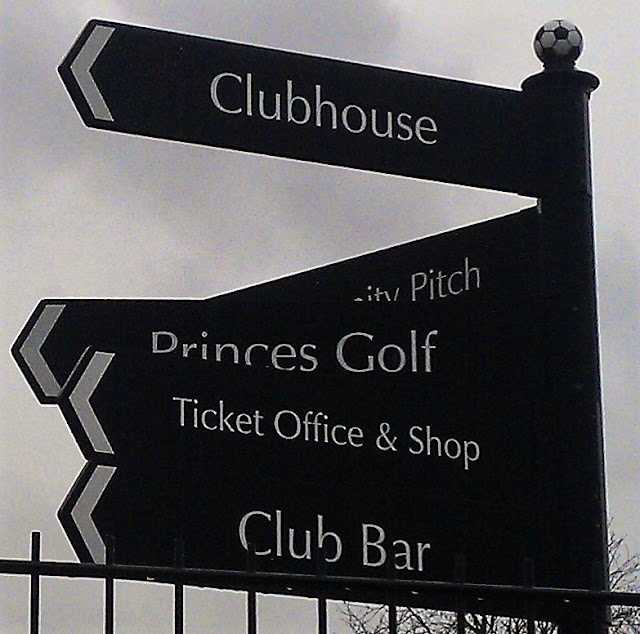 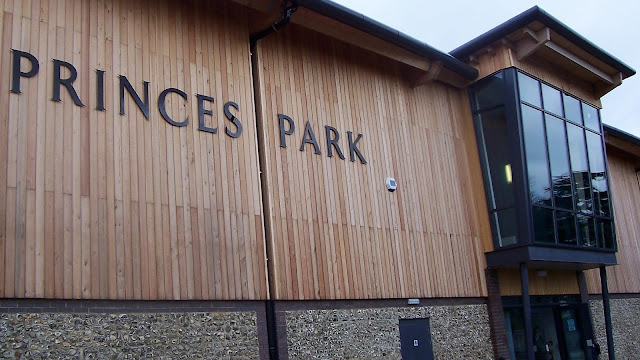 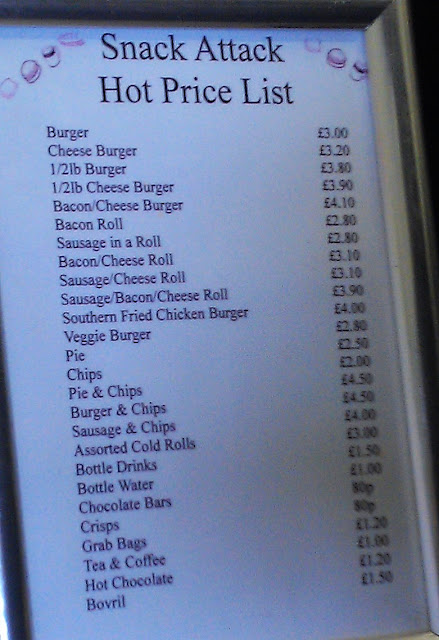 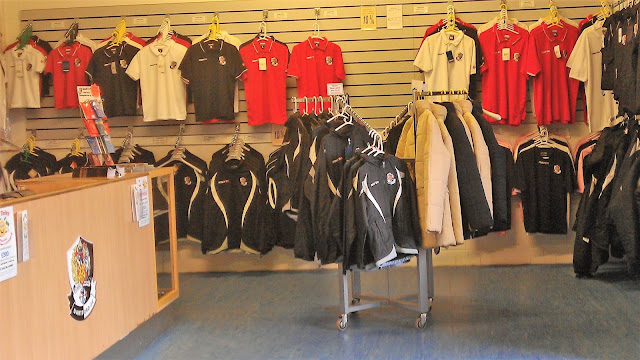 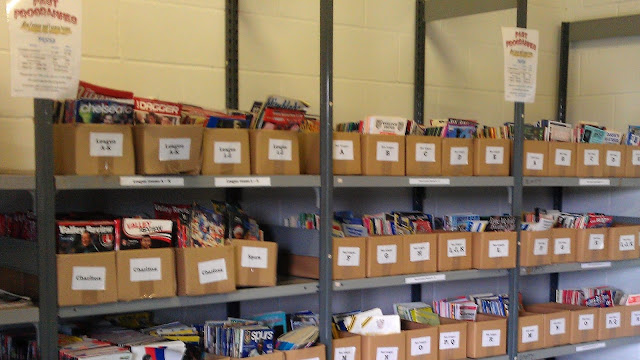 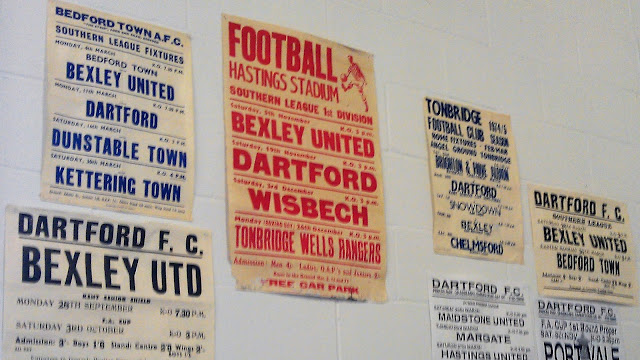 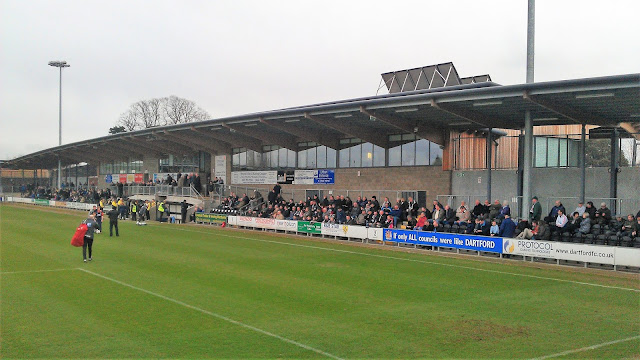 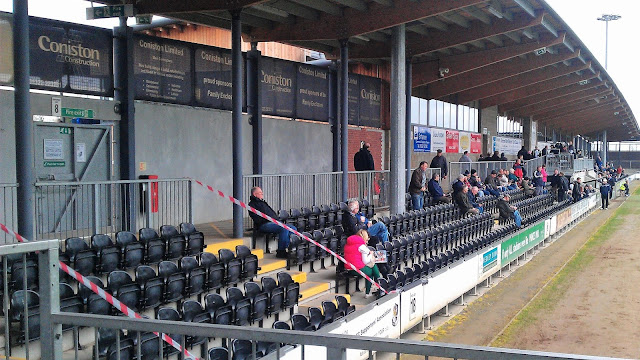 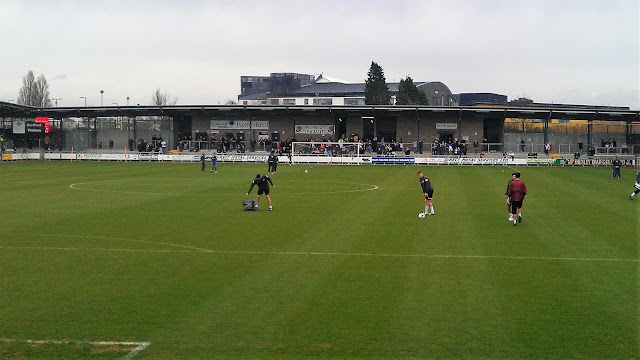 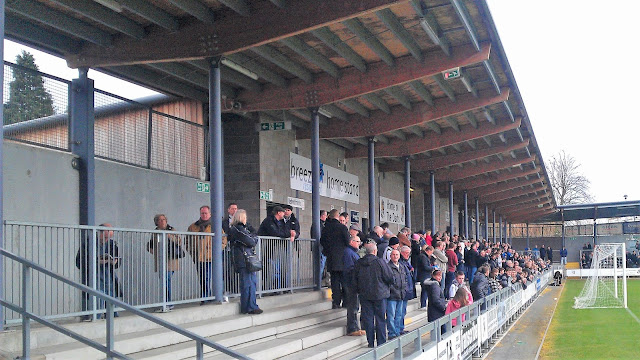 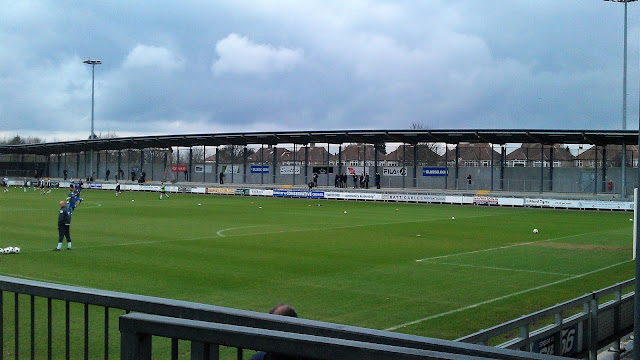 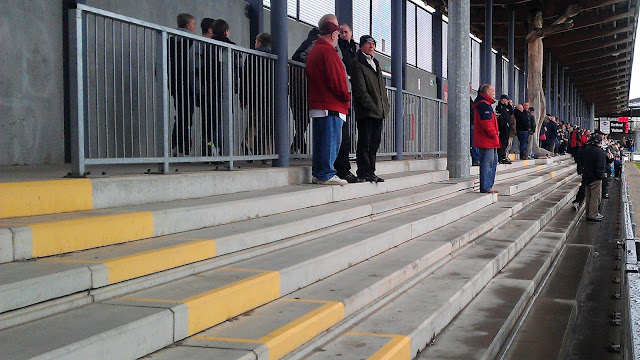 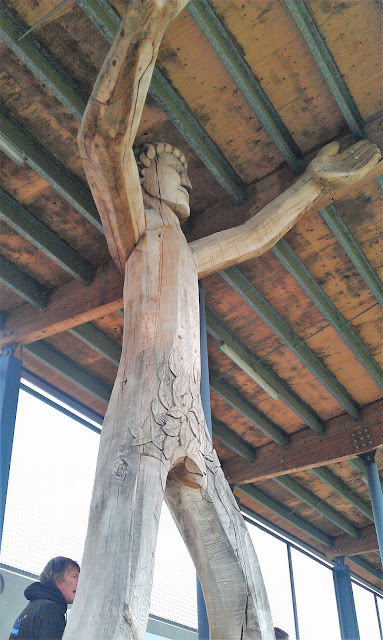 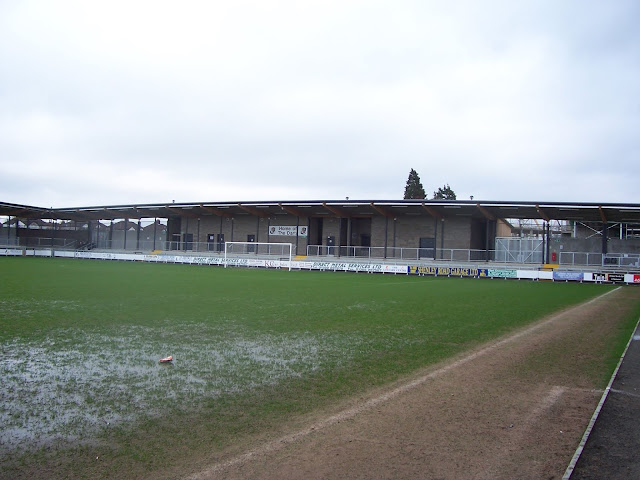 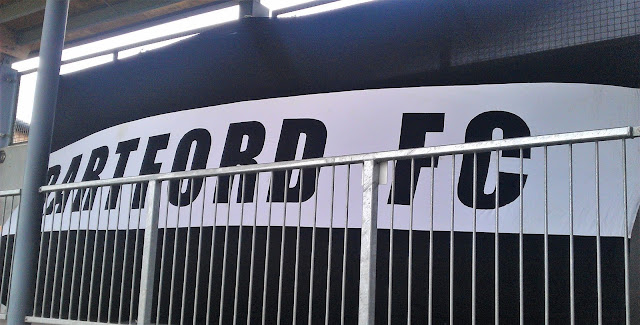