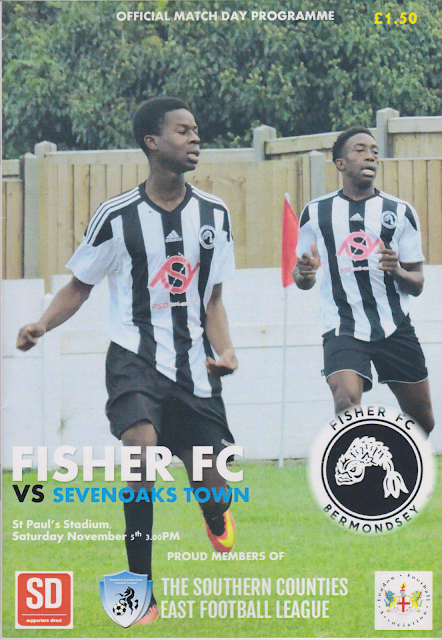 FISHER FC were formed in 2009, following the demise of Fisher Athletic who were playing as high as the Conference at the height of their success in the late 80's and early 90's. The new club took it's place in the Kent League, which was a few levels lower than the Conference South that the previous club left. Initially groundsharing at Dulwich, they've remained at the same level ever since. The league changed it's name in 2013 to Southern Counties East League, but whatever the moniker, Fisher have struggled. Their best finish so far was 10th in the 2011/12 season. This season they moved back to Fisher, but despite a really well-run club, an excellent website and an engaging Twitter, on-field matters are not going to plan, They sit bottom of the league and are yet to win at their new home in the league. 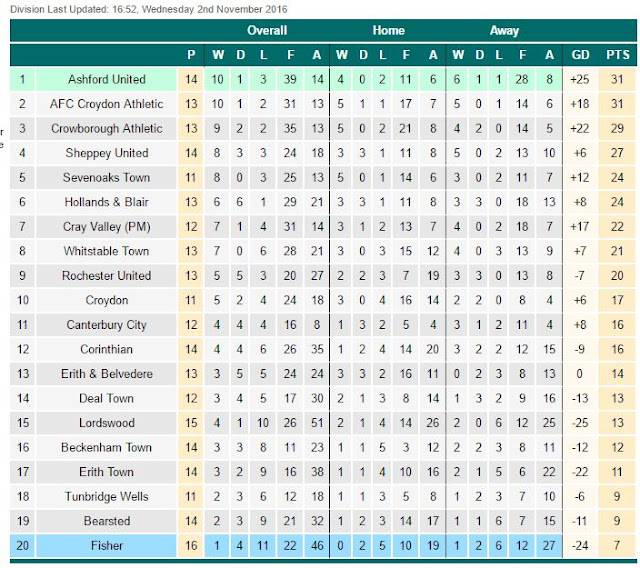 The reformed club have had little success in the cups, with the Preliminary Round of the FA Cup having been reached on 2 occasions. They've reached the 1st Round of the FA Vase on the same number of occasions. Though they are yet to win a competitive game at their new ground, they did defeat Kent County League side Farnborough Old Boys Guild 4-0 in their first ever game at the new stadium. Current manager of the club is Gary Abbott who knows a thing or 2 about succeeding in Kent Football - it was he and Terry Robbins who formed a formidable goalscoring partnership in the Conference at Welling United in the early 1990's.

I was struggling to decide what game to go to on this day, with all my other hopping pals having plans in place. I really wanted an FA Cup game, even considering a revisit to Portsmouth against my own team Wycombe Wanderers. However coach travel would be £20 alone, I'd be tied into going wherever the coach went and I'd not really been enjoying watching Wycombe lately. My initial thoughts were to go to Hadley and complete the Spartan South Midlands League, however I fancied a day out in London on the train. I was fed up after doing a lot of driving in the past week and spending ages when I stopped catching up on social media and writing down notes for my blog in the limited time that I had. Leaving my car would also mean that I'd be able to have a drink. There were a few options available, but I narrowed it down to 2 at Fisher and Croydon Athletic. The former won in the end due to an engaging Twitter and good information provided on their website, I was shocked to see them struggling and yet to register a league win at their new home, however after reluctantly plumping as this for my game, I was really looking forward to it after I did some research. 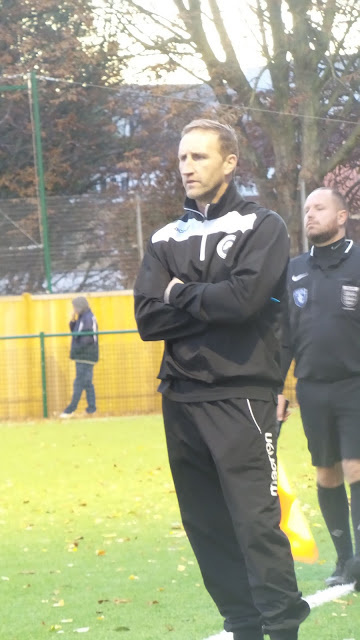 On the day of the game I woke up with a stinking cold, having a lemsip and a bath to try and ward it off. After a cooked breakfast I left just after 10am, getting to Chalfont & Latimer train station. After picking up a paper, I made my way to the platform, not having long to wait before my train arrived. It was a simple first leg of my journey, one train to my first stop at Aldgate where I arrived just before midday. From there it was a 10-minute walk to the Stable cider and pizza bar, my intended pre-match watering hole. There I had a very fresh tasting 'Hells Bells' pizza which was not as spicy as I thought it would be. Also thrown in was a free cider tasting board (5 thirds) thanks to me signing up to their mailing list.  Great value at £11 for the pair, and it set me up nicely for my next leg of the journey. I'd been hoping to see the Merstham v Oxford United game but it was on BT Sport. The FA Cup highlights had also been hidden away, the fact that there was absolutely no Saturday night coverage of the greatest cup competition in the world was a big disappointment. Especially when you consider the utter tripe they pump out on a Saturday evening, bar the football highlights, it's no wonder most choose to get bladdered. 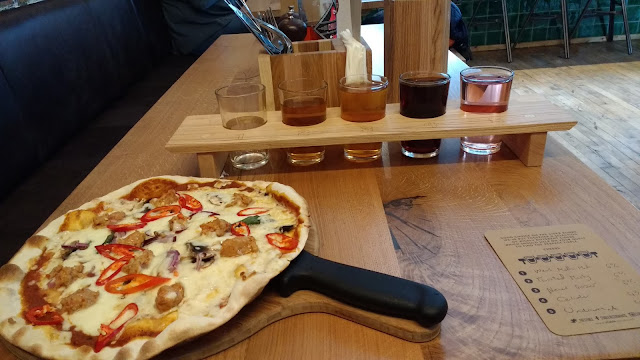 From my lunch stop it was a 3 mile walk over the Thames and via Tower Bridge to get to Fisher. It was a highly pleasant walk with some good photo opportunities. I wasn't expecting the leafy backdrop to the ground, given that Millwall, not far away has a very industrial feel to it. I arrived at the ground at 2.25, paying £7 to get in plus £1.50 for a programme. After a look around I took a place on the far side for the game. 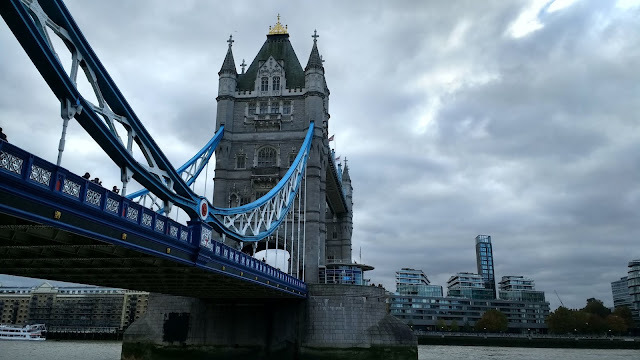 Only 7 minutes had elapsed when the inevitable happened and Sevenoaks went ahead. Sloppy defending allowed Byron Walker to get clear of the defence and he chipped the Fisher keeper to put the visitors ahead. Fisher looked as if they might be overwhelmed in the early stages as they were struggling to get any kind of foothold in the game. However around the 20-minute mark they appeared to grow in confidence after some good play, and dominated the rest of the first half. They were unlucky not to go ahead on a number of occasions, most notably when the visiting keeper tipped a goal bound shot around the post. I was pleased to see Wycombe winning at Portsmouth at half time and were dominating against the high fliers. Not bad for a side that have not won away in 9 months. There was disappointment when Wycombe were pegged back a couple of minutes into the second half and my own game was being closed out by Sevenoaks, with the visitors looking a lot more solid. They grabbed a second on 65 minutes, Harrison Carnegie calmly slotting home from a low cross. This killed the game off for sure and Fisher never really looked like getting a goal back. 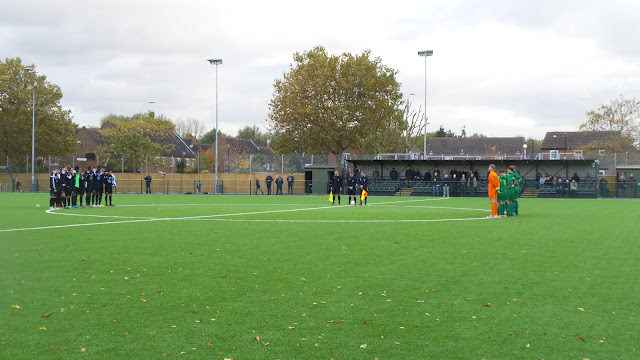 The majority of the 156 people present would have been going home disappointed then, but there was at least one happy person. Wycombe had grabbed a surprise late winner from Adebayo Akinfenwa having spent the second half under a bit of pressure. I listened to the last 5 minutes as I took the 20-minute walk back to Canada Water station. I tried to listen to the after match phone in on the radio but it was underground all the way. Instead I listened to some podcasts and caught up with my blog to pass the time. It was a straightforward journey to Finchley Road where I had a seamless change to get the train to Chalfont,  barely 15 seconds wait between the two.  I got back at 6.40 getting a couple of pints of a new cider to take home, plus a couple of bottles. I got home just after 7, catching up online and completing my blog. The rest of the night was spent watching the football highlights and having a few ciders. It had been a good day, and the football will continue tomorrow as I'm off to St Albans City v Carlisle United in the FA Cup. 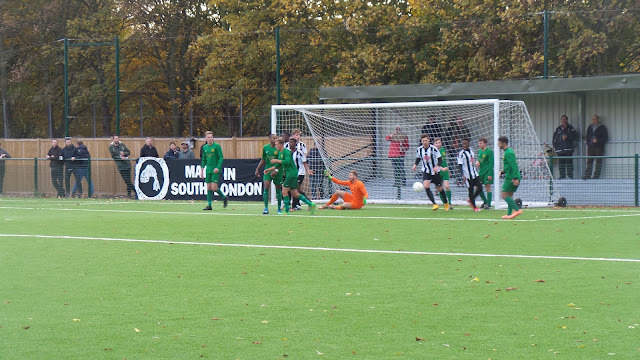 ST PAUL'S SPORTS GROUND is set amongst pleasant greenery despite its close proximity to the centre of London. Its a fairly standard modern non-league ground with the standard metal structure in place. This holds around 150 and there is a similar arrangement for the terrace behind the goal, this holding around 200. The rest of the ground is open flat standing though the outer walls are made of wood which gives it a pleasant surround. The leafy backdrop and Canary Wharf in the background meant that it was a pleasant place to spend an autumn afternoon. Hopefully they will personalise their home more in the future, as like Slough recently, there is very little signage around to say it's their home.


Food and drink at the ground is quite basic, as I only saw snacks. Drinking wise, cans of ale from a local brewery are available, as are Fosters lager and Strongbow cider. Being in London, you are never far away from something that suits your tastes better. There was a pub near the ground, or you could extend your afternoon with a nice walk along the Thames if you fancy something further afield. 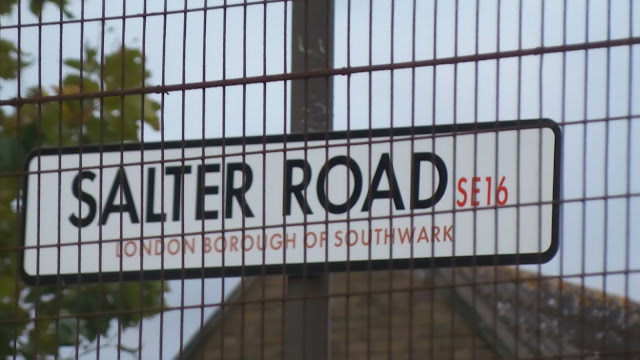 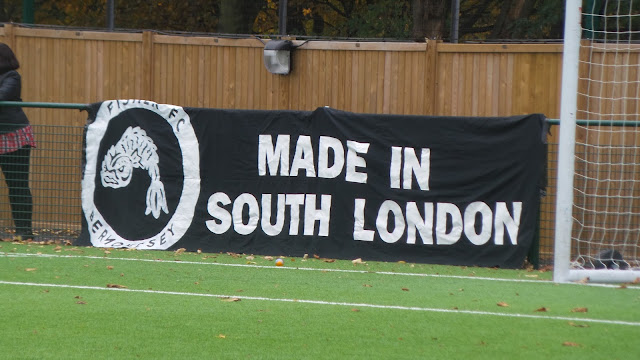 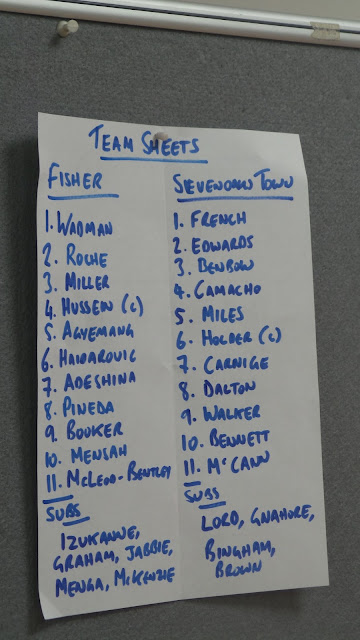 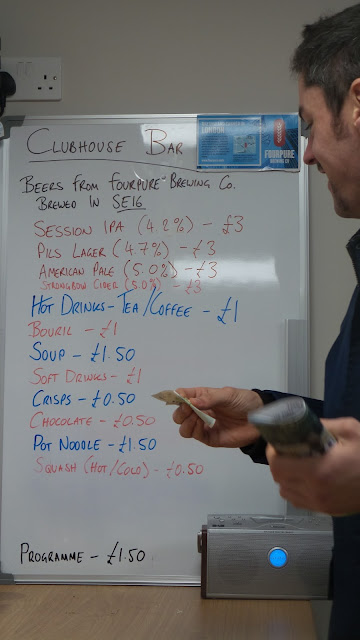 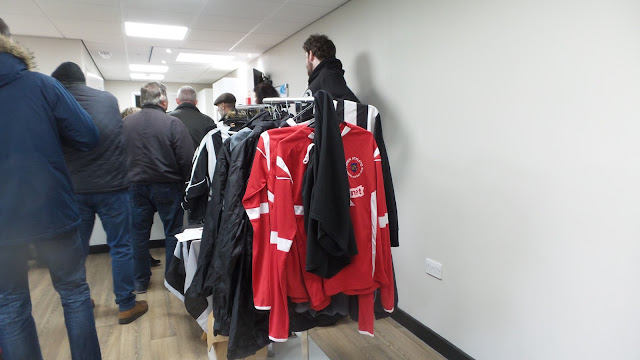 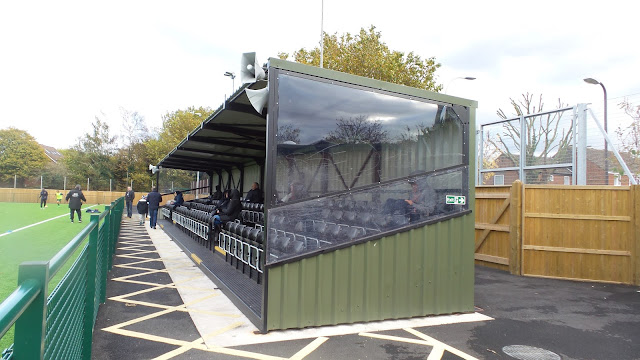 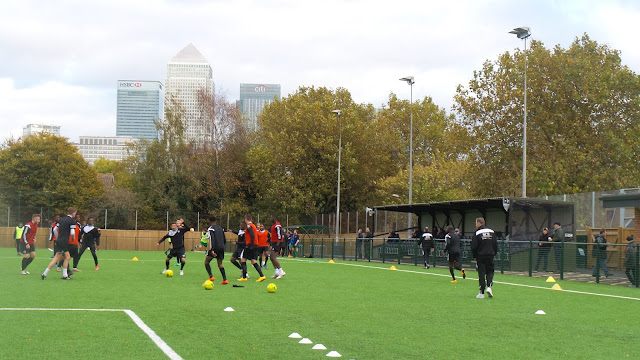 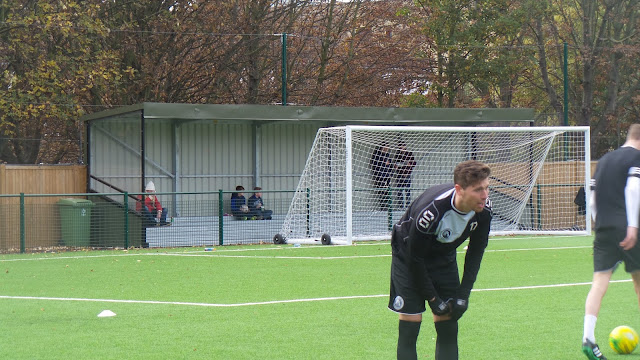 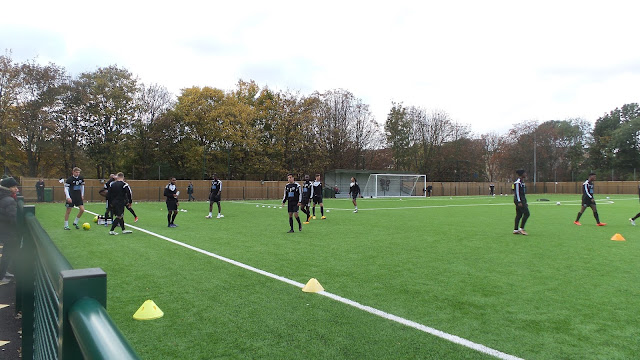 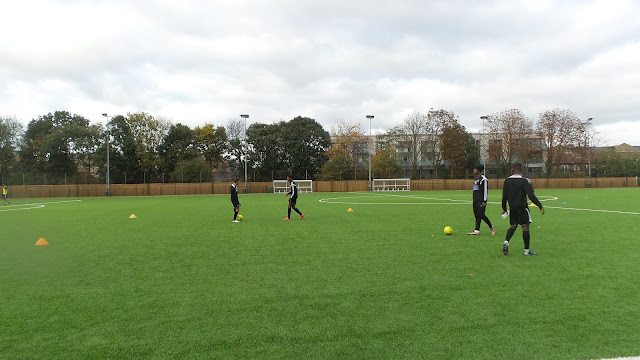 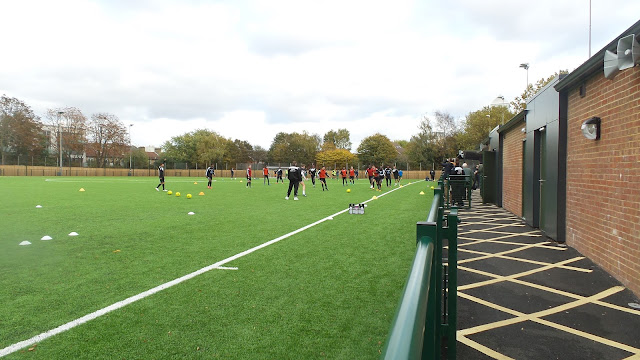 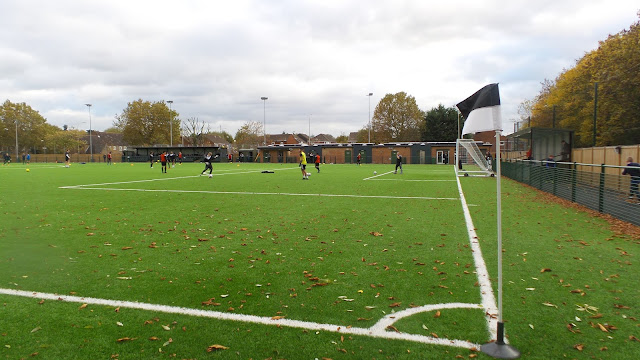