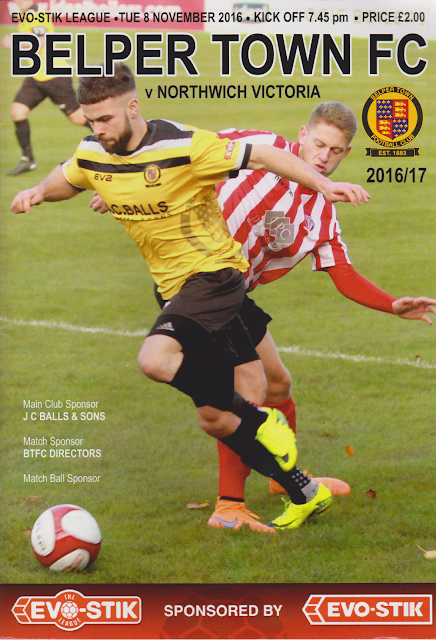 BELPER TOWN were formed in 1883 and were founder members of the Derbyshire Senior League seven years later. Runners-up in 1896, they joined the Notts & Derbyshire League in 1911, but left at the end of that season. The next 50 years or so of their history is unclear due to financial woes, but they did reform in 1951, joining the Central Alliance. Joining the Midland League in 1961, they stayed here for the next 21 seasons, winning the championship in 1980. They were founder members of the Northern Counties East League in 1982. They were champions in 1985 but it wasn't until 1997 that they made the step up to the NPL when they finished runners-up behind Denaby United. They've remained there ever since, remaining in its second tier for all but one season. Following a 4th placed finish in 2013/14 they beat Leek Town and Mickleover Sports in the playoffs to reach the NPL Premier. They finished rock bottom in their only season in the top tier, returning to D1 South last season, finishing 13th. So far this season, it's gone a lot better and they sit in 9th, three points outside the playoffs. Opponents Northwich Victoria sat just below them, 2 points behind in 11th place.

In the FA Cup Belper reached the 1st Round in 1887, before a narrow 3-2 defeat to Sheffield Wednesday. In more modern times, they've reached the 4th Qualifying Round on three occasions, the last of which came in 2008/09. Starting out in the Preliminary Round they beat Glossop North End, Barwell, Redditch United and Prescot Cables before a defeat to Droylesden in a replay. They missed out on potential ties against Darlington and Chesterfield in the process. The FA Trophy has not seen any significant runs, with the 2nd Round being their best progress. The FA Vase has been a much happier hunting ground with the semi-final being reached in the 1994-95 season. Despite a 1-0 win in the first leg against Oxford City, they lost the return in Oxfordshire 3-1 and missed out on a final at Wembley against Arlesey Town. Local cups won include the NCEL Presidents Cup, the NPL Presidents Cup and the Derbyshire Senior Cup, a competition which they have won on 5 occasions.

The club's nickname is the Nailers, owing to the town's history in nail making. Famous people from Belper include Tracy Shaw, who played Maxine Peacock in Coronation Street and former Dery County chairman Jack Kirkland who was disparagingly referred to as 'the big noise from Belper' by a frustrated Brian Clough during his battles with the Derby board. Tim Dalton, who played James Bond for a time was also brought up in the town.

This match was decided as myself and fellow groundhopper Anwar's game on Sunday evening, after I'd returned from a good day out at the St Albans City v Carlisle United FA Cup game. With the onset of the cold weather, the choice was quite limited compared to previous weeks, and so, in the end, we went for one that we'd both wanted to visit for a while in Belper Town. I'd considered going here recently for their FA Youth Cup game against Alfreton Town. I'd opted to go to Holwell Sports instead as it was a first-team game and missed out on an entertaining 5-4 win for the visitors in the process. I'd also fancied an afternoon visit for an NPL Academy game, but on both the Wednesdays on my weeks off they were playing away, so I ended up going elsewhere. At least it would be a decent game against Northwich Victoria, with both teams just outside the playoffs in the NPL D1 South. 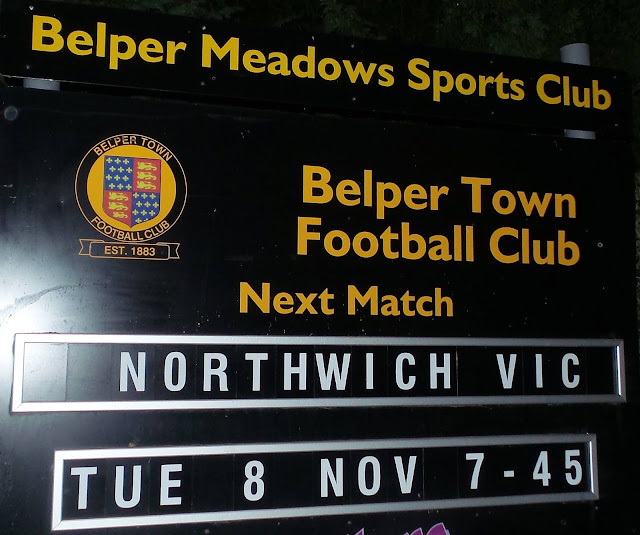 The weather had changed dramatically in the few days before the game, as the mild autumn switched to a freezing winter. Thankfully it didn't appear as if we'd be suffering any frozen pitches just yet as the forecast was three degrees, so not quite a chance of 'When will I see you again' in terms of a revisit after a postponement. There was also rain forecast, but not until 7PM. On the day of the game, it was my usual day off and I walked down town to get some exercise before coming home for lunch. I passed the afternoon away catching up on various things, reading an interesting article on the Guardian website about tonight's visitors Northwich Victoria. In 1986, due to lack of players they had to pick out 3 supporters out of the bar to play. Amazingly they drew 1-1 against the then league leaders, especially given that one of the 'players' had warmed up with a pork pie and a couple of pints! 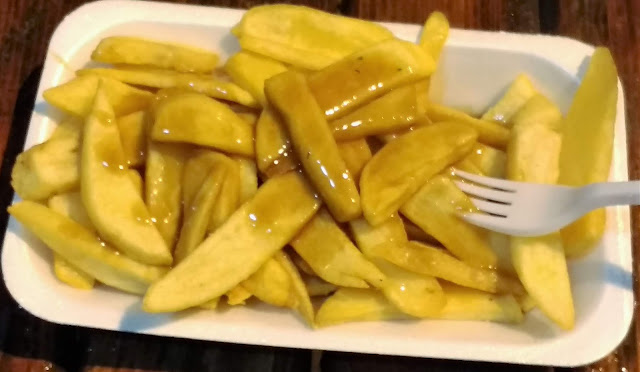 I left a little early as I needed to get fuel and also some stuff for the game. I arrived at Anwar's just after 4 and he was there waiting for me. It was just as well, as the roads were on their usual disgusting form. The worst area was getting on the M1 with delays diverting us once which led to even more delays. The greedy government fleece the motorist in fuel tax to offer tax breaks to their rich mates, whilst the roads remain woefully inadequate. It actually turned out to be an accident a few miles up on another road, though it caused complete chaos and messed up the roundabout getting blocked getting onto the M1. Obviously, I hope they are ok, but when just one person's mistake cause so many people misery, it's very frustrating. Mercifully the rest of the journey was great, even the usually unreliable M1. We still only got to Belper at 7.30 though, meaning any pre-match plans were ruined. I'd been looking forward to a curry all day and hoped that the food in the ground would be good. Thankfully it was. After paying a fairly pricey £9 to get in and £2 for a programme went round to food kiosk and got a nice portion of gravy and chips for £1.60. They were so good I had a second portion at halftime despite the generous portion size. Due to traffic issues elsewhere, the kick off was put back to 8 and this was most welcome as it gave me a chance to wind down, though I could have done with more time. Usually, I'd have a pint to help, but after a week off work where I drank every day, I was giving my body a rest. 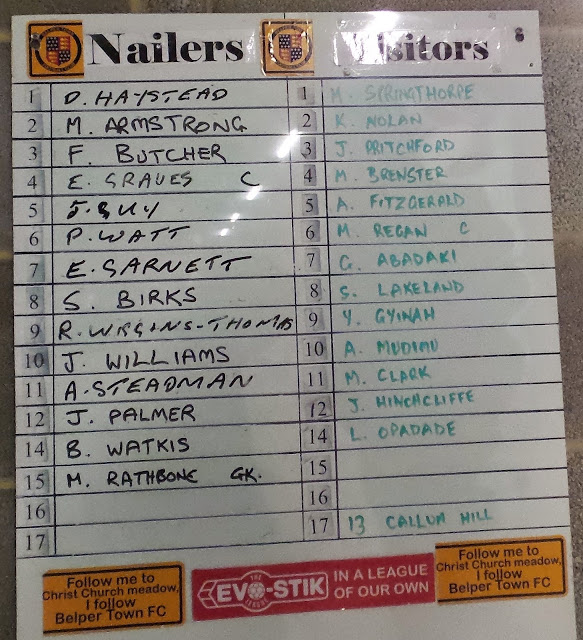 After all the hassle we had on the journey up it was perhaps fate that it was going to be a 0-0, the second Tuesday in a row and 3rd time this season that I'd witnessed a blank scoresheet. This was actually a reasonable game though with some good chances. Northwich Victoria had the best of the first half and Belper keeper Dan Haystead had to be at his best to claw a great Vics free kick out of the top corner. The second half saw Belper get back into the game and they really rallied late on, hitting the underside of the crossbar. Right at the end, Haystead made his second great save as he picked a Northwich shot out of the corner of the net. So not the worst 0-0 I've ever seen and thankfully the journey home was a lot better. Leaving at 9.50, we were back in Aylesbury 2 hours later, with me getting home at 12.15. I couldn't get to sleep for 90 minutes, never good with a 4am start at work and ended up catching up on sleep the following afternoon. 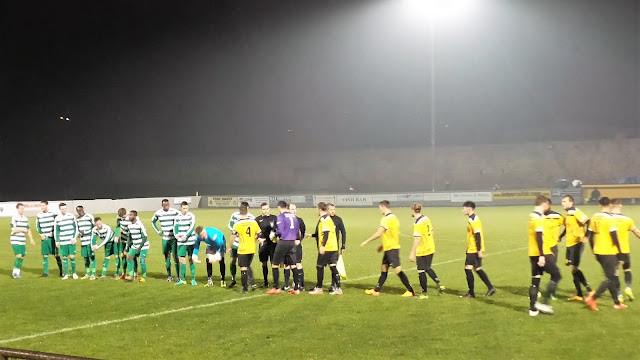 CHRISTCHURCH MEADOW was a ground I had previously visited on Friday 11th February 2011, whilst travelling up to Bradford for the weekend as Wycombe were playing up there. I was impressed with the ground which was in a picturesque and quiet location, yet really close to a decent town centre. The ground was also very impressive, a 500 seater stand with a covered area opposite holding around 200. The rest of the ground was open with the addition of a few steps of terracing behind the goal. I was looking forward to visiting properly for a game and exploring more.

When I did revisit the ground was pretty much the same, though I was annoyed I didn't get to have a look around the town. Thankfully the facilities in the ground are decent, with the tea bar providing good value and choice. The clubhouse looked very smart, warm and modern and the club shop also had a decent range of merchandise. The programme was pretty average in terms of content but nicely presented for the £2 asking price. 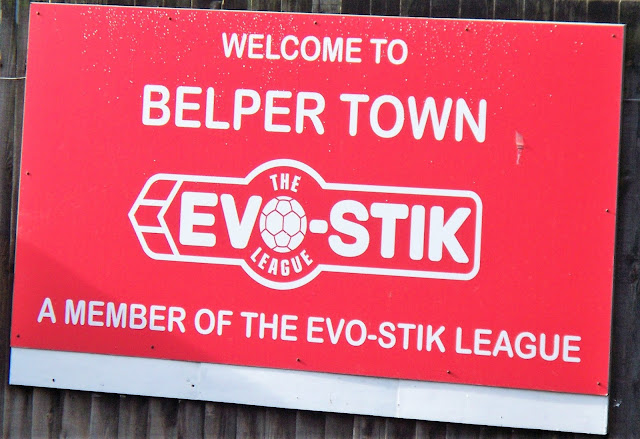 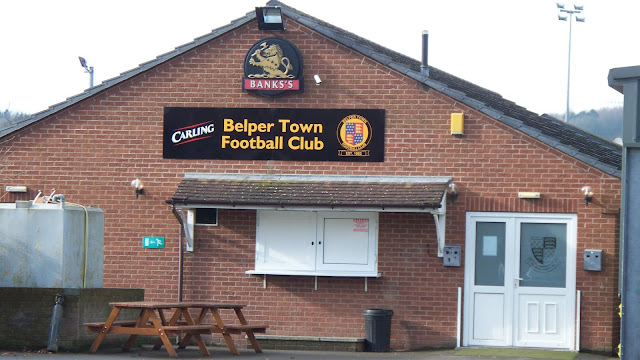 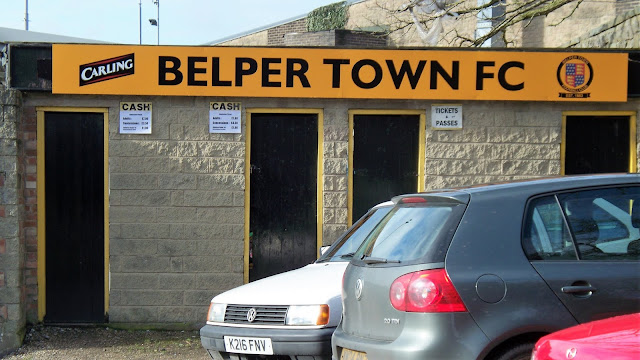 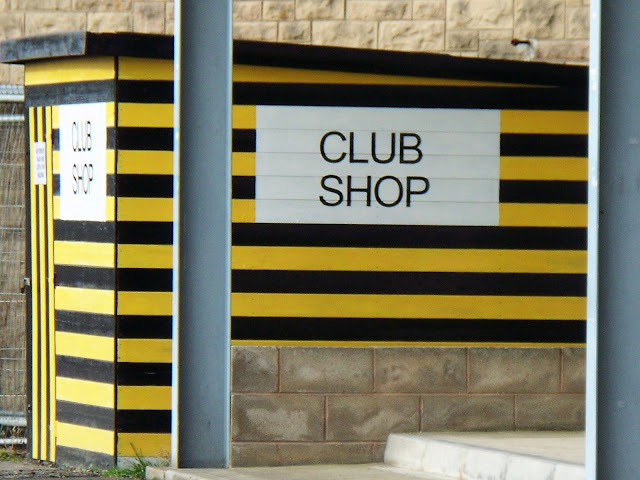 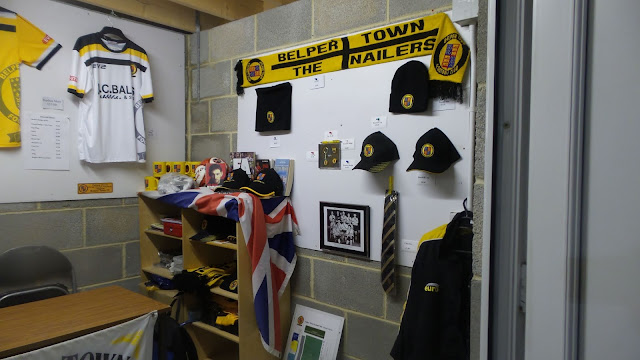 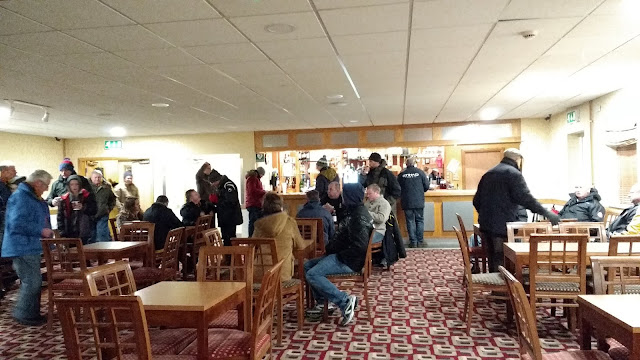 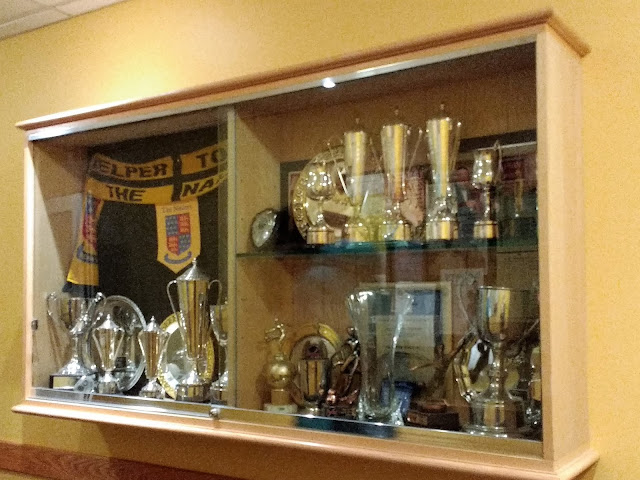 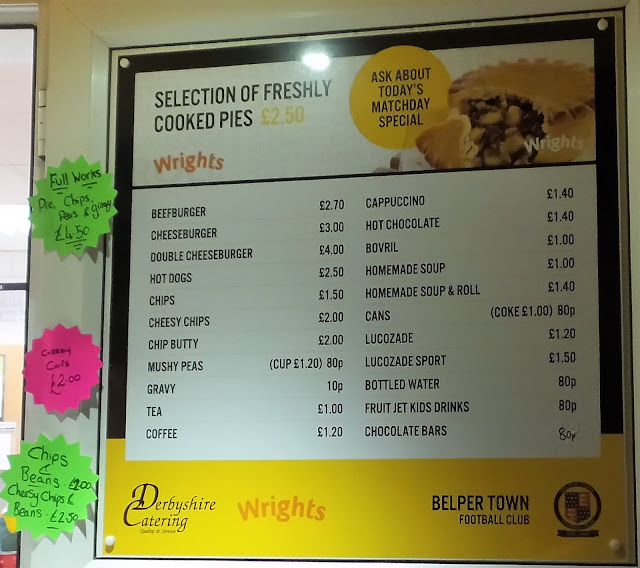 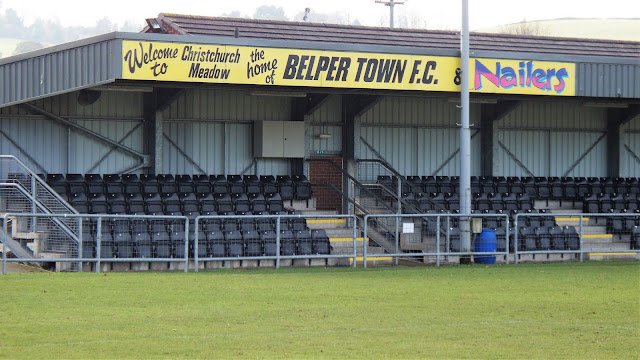 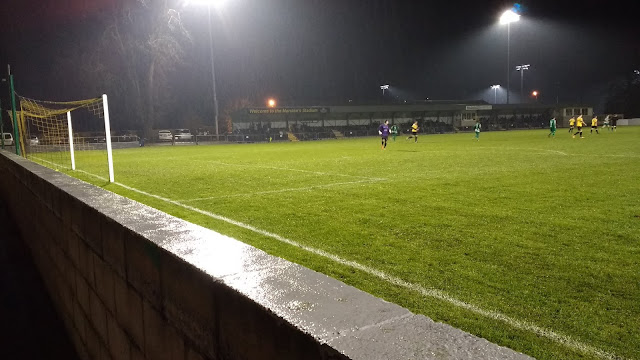 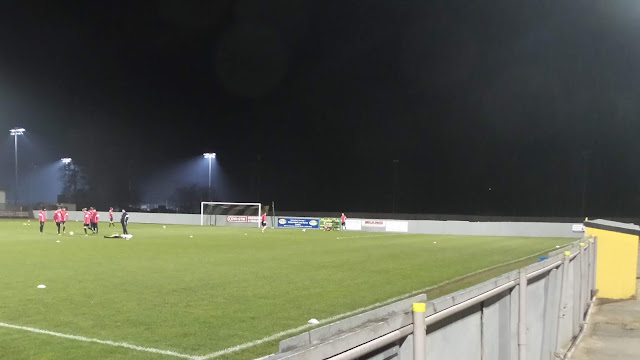 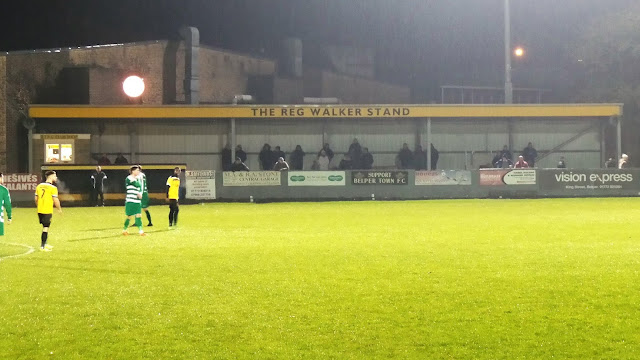 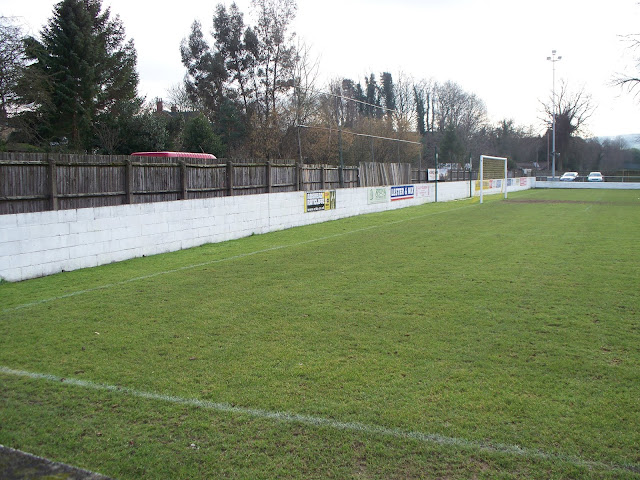 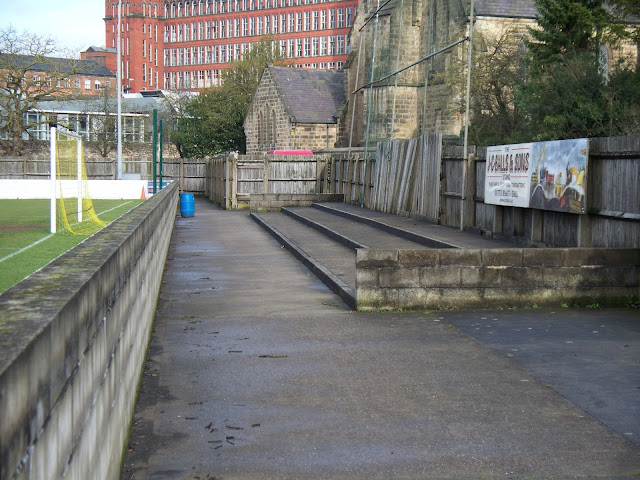 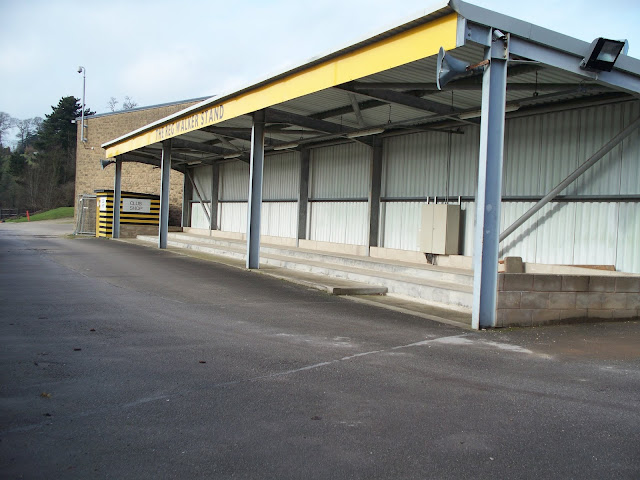 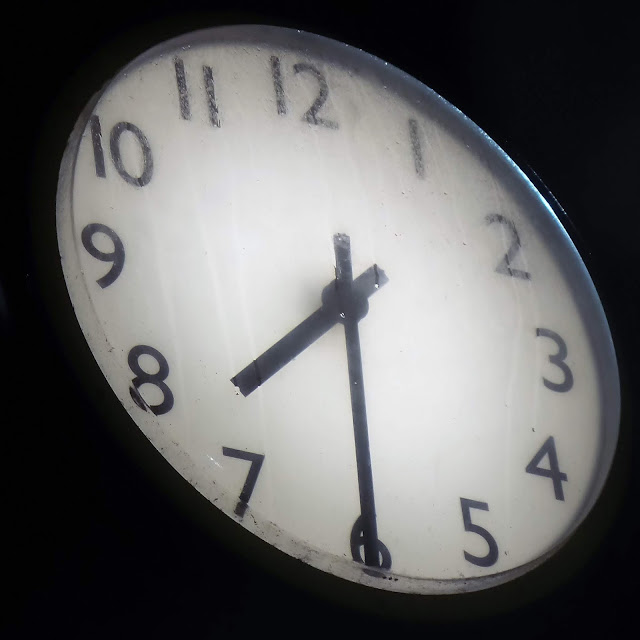