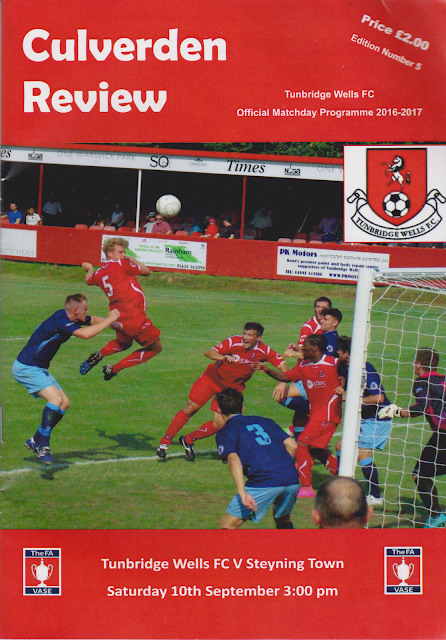 TUNBRIDGE WELLS FC were formed in 1886 and have been known a number of names during their history, including Tunbridge Wells Rangers and Tunbridge Wells United. The club has been in various leagues during its history, including the Isthmian League from 1910 until 1912. The original Rangers club folded in 1967, but since reforming under their current name later that year, they have been a mainstay in the Kent League, which was renamed the Southern Counties East League in 2013. They have an impressive record of never being relegated from here, despite some tough times in the late 1990's - most notably in 1998/99 when they finished bottom, but stayed up thanks to there being no suitable replacements. Generally though they've done pretty well - runners up in only their second season and league champions in 1985. After a good run of top-half finishes, last season's 14th placed finish will have been a disappointment and that hangover has carried on into this season with them second-bottom of the SCEL Premier at kick off. 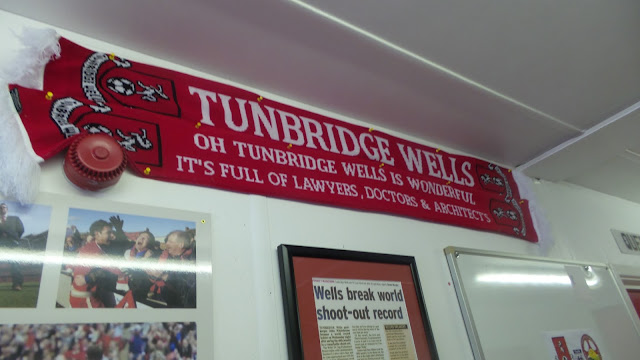 They will be hoping for the FA Vase to provide some much-needed cheer, as it did when it catapulted them to a Wembley appearance in 2013. Wantage Town, Binfield, Dunston UTS, Larkhall Athletic and Hadleigh United were defeated to set up a 2 legged semi-final with Shildon of the Northern League, a competition that has provided so many finalists in recent years. A 2-0 victory at home in Kent meant that not even a 3-2 defeat in the away leg could prevent their dream trip to Wembley from happening. Sadly for them, another Northern League side, Spennymoor Town stood in their way as they narrowly defeated them 2-1 in the final. 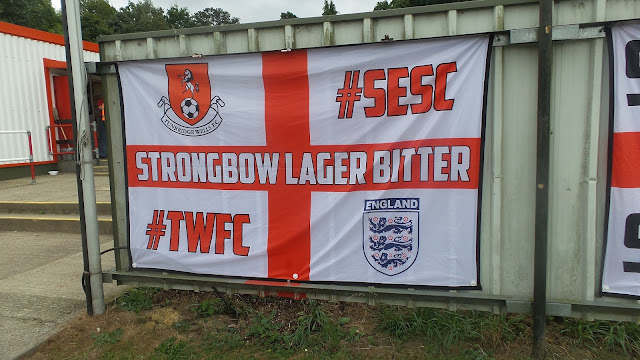 In the FA Cup Tunbridge Wells Rangers reached the FA Cup 2nd Round twice in the 1930s - losing to Carlisle United and Accrington Stanley, while United reached the 1st Round in the 1950's before a 5-0 defeat to Brighton & Hove Albion. The current club have not had so much cheer in the competition, with four 2nd Qualifying Round appearances, the last of which was in 1979. Local Honours include the Kent League Cup on 5 occasions, the Kent Senior Cup 3 times, the Kent Senior Shield twice and the Kent Senior Trophy. The record win of 10-0 at their current stadium came against Deal Town came in the 1985/86 season, whilst the record attendance of  1,754 was for the 2013 FA Vase semi-final game against Shildon.

Jason Bourne is the current club manager, and while sadly for them he is not the famous hero from the film series, he is the record appearance holder for the club, racking up at total of 412 appearances in a Tunbridge Wells shirt. Bob Shankly - brother of the legendary Liverpool manager Bill is otherwise the most well-known name to play for the club. As for Tunbridge Wells itself, famous people have connections with the town include comedienne Jo Brand, cricketer David Gower and perhaps not in keeping with the town's conservative middle-class reputation - musicians Shane McGowan and Sid Vicious. 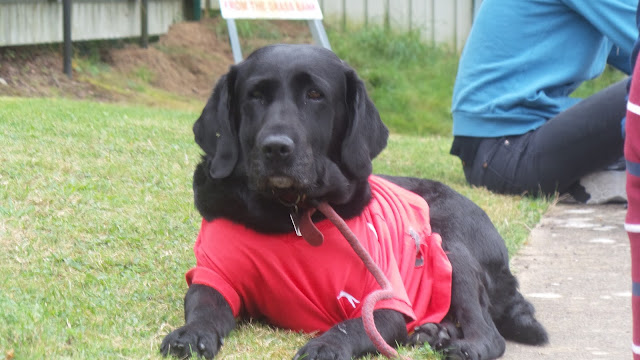 On the day of the game I woke around 8am, having some breakfast and a bath before doing some research for today's blog. As with the last few weekends, a blazing hot week was followed by a rainy Saturday, which didn't put me in the best of moods. Add to that my PC having very slow internet and I was just glad to get out when I left at 11am. At least I had 3 excellent pubs to look forward to, though in reality I'd probably only visit one, due to the fact that I was driving. I made sure I had wet weather gear packed as I'd have to be doing a fair bit of walking once I got to the ground. 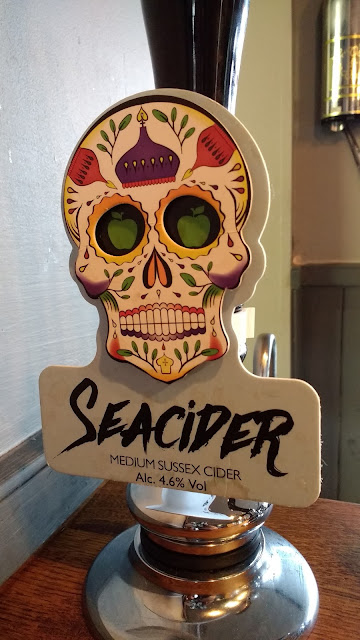 It looked as if plenty of others had the same idea of going out as it took half an hour to reach the motorway which was under 6 miles away. The M40 was fine, but the M25 was it's usual repulsive self, slow as soon as I got on it and miles and miles of crawling traffic. There were a couple more spots of delay, but I got to the ground at 1.30, having factored in an hours delay, and indeed I was spot on. I parked up and grabbed a programme before heading out for the pub. First up was The George where I had a pint of Seacider, refreshing but I'd have preferred something drier. Then onto Sankey's where I had a half  of Thistly Cross Whisky Cask, this was a retry but I'd not had it for ages. I was a bit tight for time but I stopped at a cafe for ham and Cheese panini and fries. 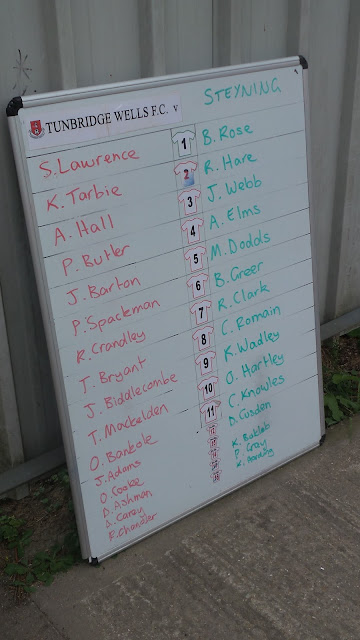 I got to the ground just after 3, and witnessed the Tunbridge Wells fans ripping the visiting keeper for his boy band looks. Their team took the lead on 18 minutes with a finish from 6 yards by Ollie Bankole. Another close-range finish just before half-time made it 2-0 and then Ollie Bankole made it 3-0 on 67 minutes. 10 minutes to go and Perry Spackman made it 4-0 with a header from a corner. Craig Knowles scored a late consolation for Steyning when he curled in the bottom right-hand corner but it was too little, too late. 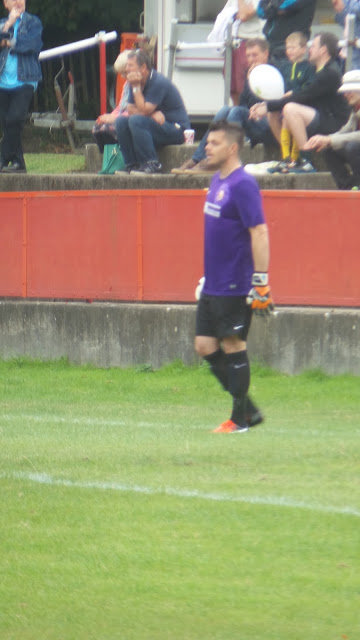 After the game I went back to my car and got ready to drive home. I put my radio on BBC Radio Kent for their great non-league coverage and they mentioned several teams, though not the game I'd been to. I refrained from listening to the Wycombe summary on BBC 3 Counties as it had been yet another defeat, this time at Portsmouth. To be fair, this was always going to happen according to the form book, but it was especially disappointing after leading. I'd initially planned to be going to this game as Portsmouth is one of my favourite away days. However, the recent poor performances dissuaded me against this as it makes no sense spending a lot of money and only getting annoyed and frustrated. There are also some serious splits in the fan camp, with lots of slagging off of various groups of supporters and it wasn't something I wanted to be part of. Even the normally positive Gasroom were calling for the managers head today. There was yet more delay on the way home, another 30 minutes on the charmless M25, so I didn't get in until 7. It had a couple of hours sleep when I got home, ensuring I was refreshed for Match Of The Day, with me being able to have a late night with not being in work tomorrow. 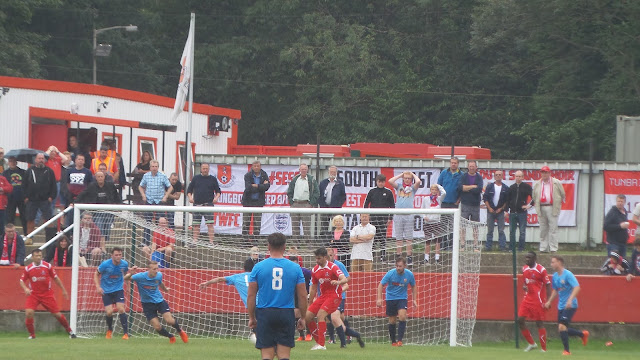 THE CULVERDEN STADIUM is a classic non-league ground and is extremely impressive for step 5 football. One side is covered, and this is a mix of 250 seats and around 600 standing. There is also a large uncovered terrace with around 1200 capacity while the other 2 sides of the ground are flat standing. It's delightfully ramshackle and a great visit for any groundhoppper.

There's a tea bar and a clubhouse at the ground, but I didn't use either. Around 15 minutes walk away there is an area called Mount Ephraim which has 2 decent pubs - the George and Sankey's. The former is probably the best of the 2. Good wise, there are a few takeaways, the majority of which are in the opposite direction to the pubs. Even further afield is the town centre and this has some even better places, but time prevented me from checking these out. 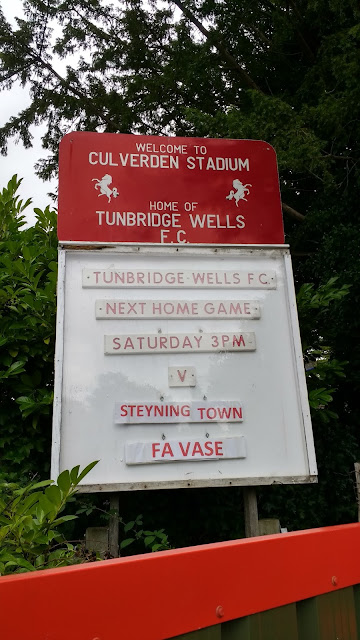 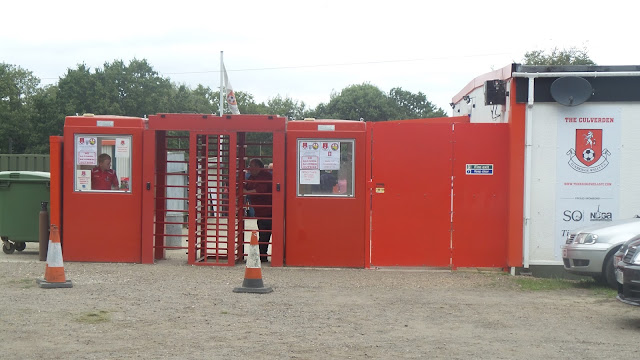 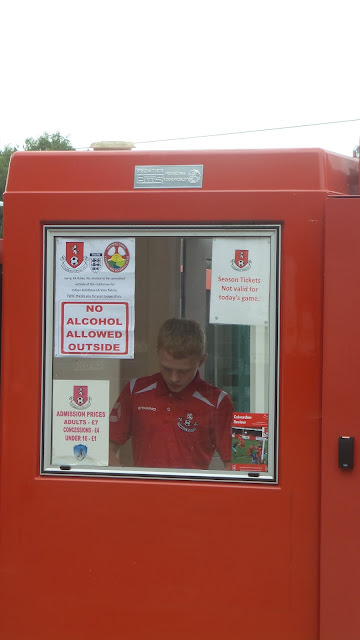 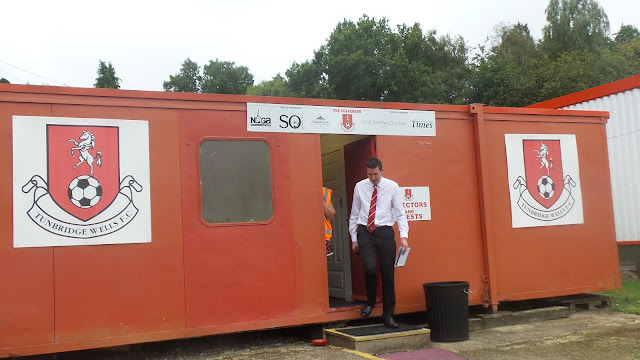 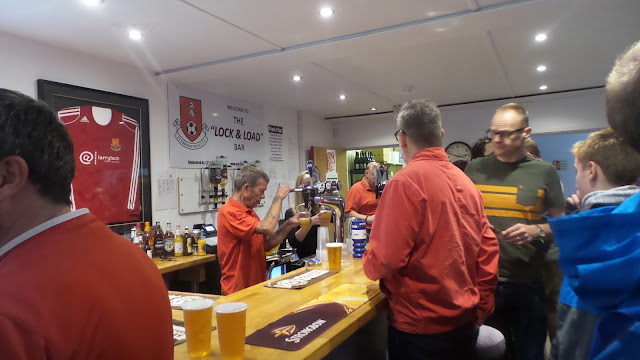 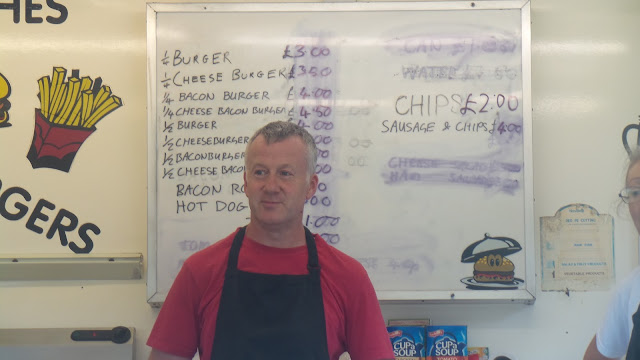 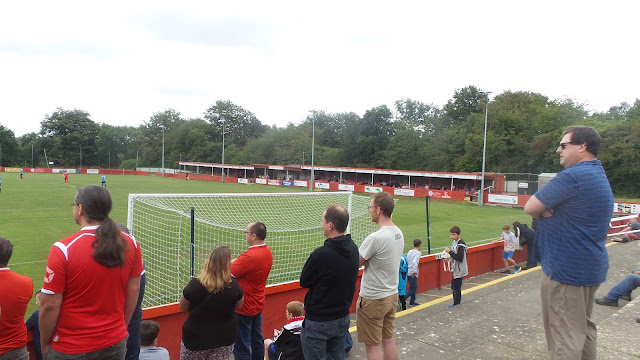 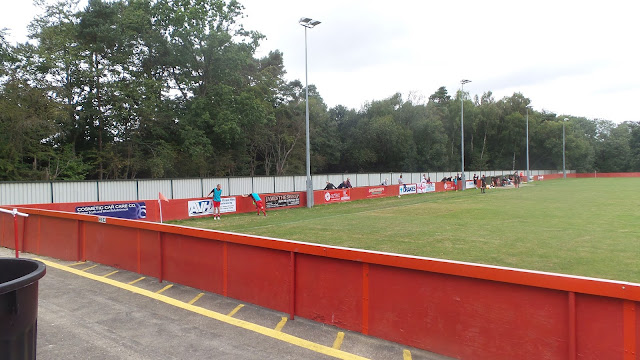 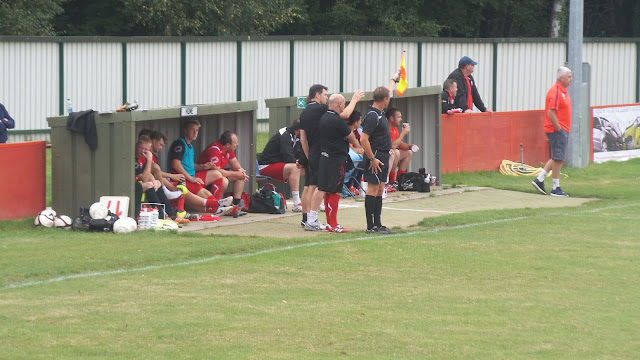 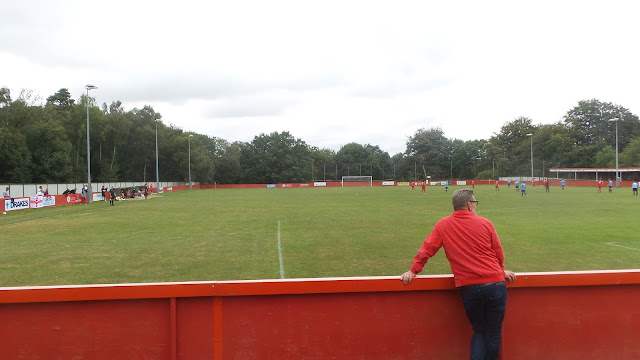 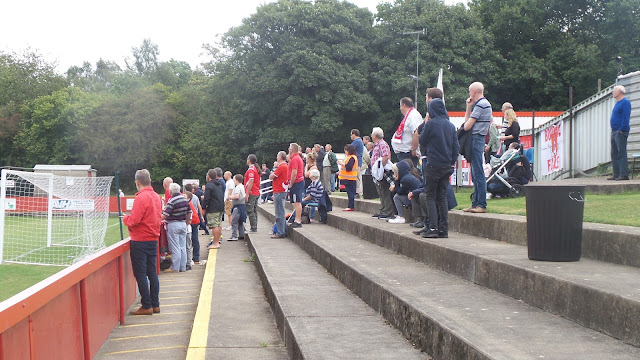 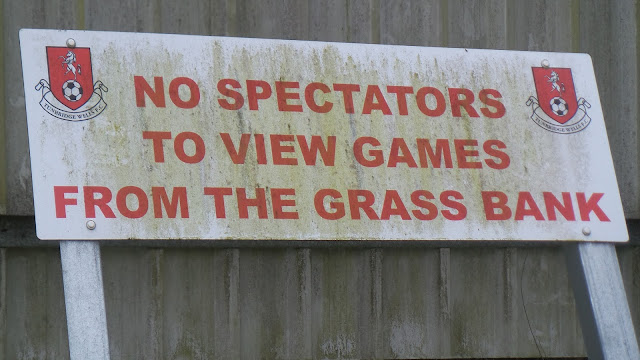 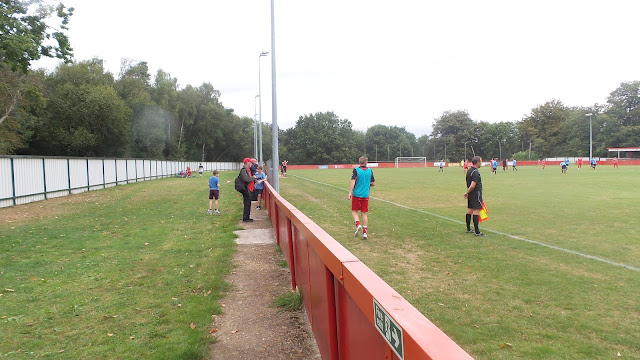 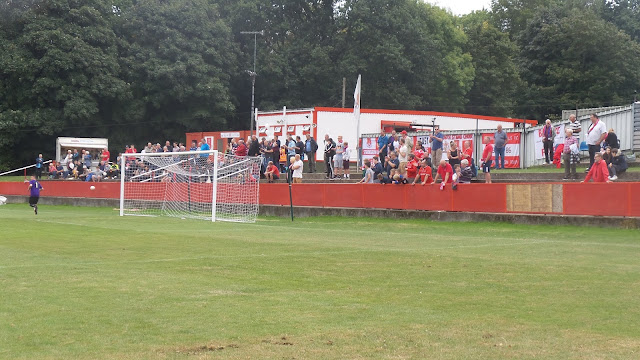 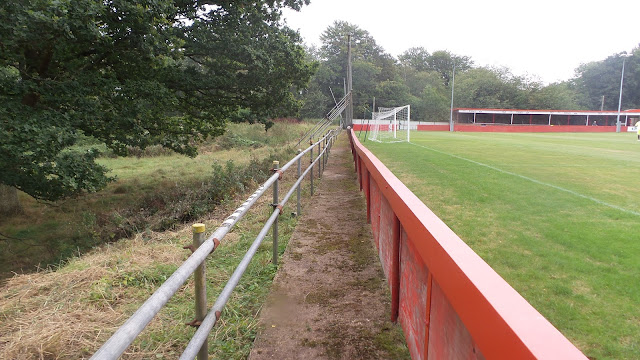 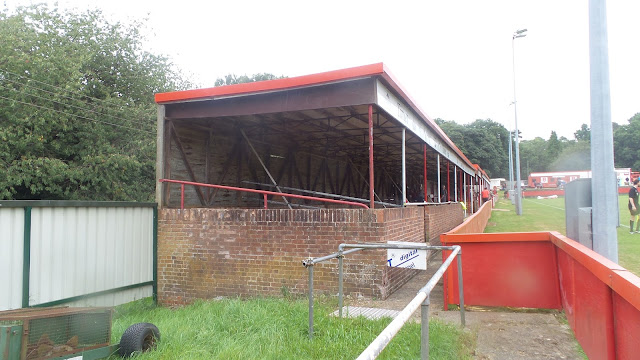 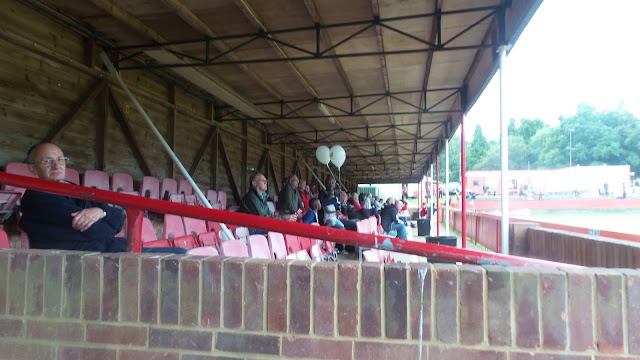 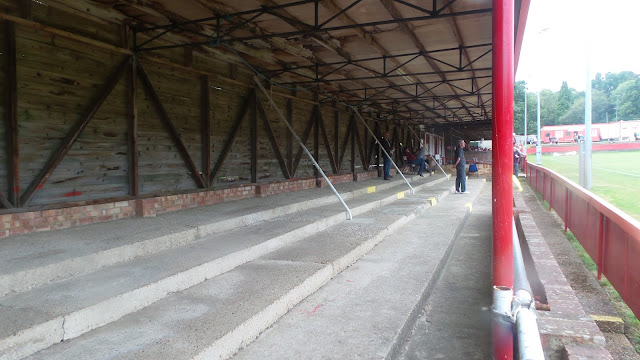