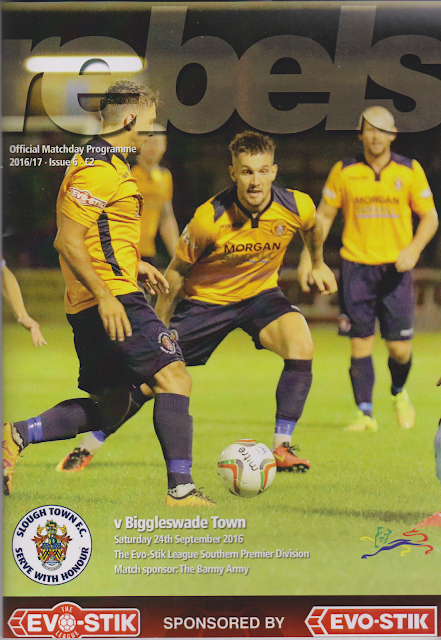 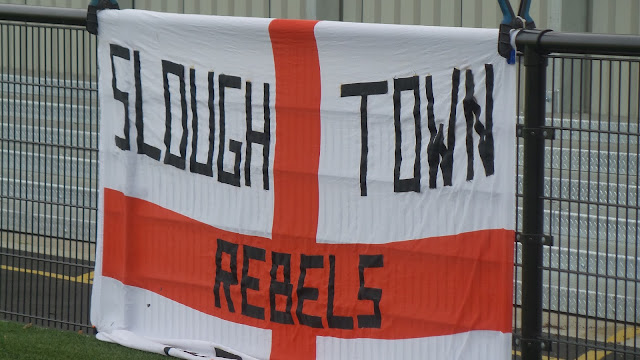 Since leaving Wexham Park in 2003, Slough Town have led a nomadic existence. Initially ground sharing with Windsor & Eton up until 2007, they moved in with Beaconsfield SYCOB for the rest of their exile which was ended in late August this year when they returned to the town for the first time in 13 years, recording a victory over Hayes and Yeading United on their homecoming. Times have been understandably tough during their period of exile and they've flitted between steps 3 & 4 during this period - a far cry from their best days in the Conference. The worst season came in 2007/08 when they were lucky to escape relegation to step 5 after finishing second bottom in the Southern League Division 1 South & West - this despite having 3 internationals - albeit from Anguilla. The previous season had saw their worst ever defeat - crashing 9-0 to AFC Wimbledon. Though performance at step 3 was mediocre during exile, they've been in the Southern Premier since 2014 and currently sit top of the table. Former local rivals of Wycombe or not, I'd love to see them back at the top of the non-league tale, and steps are certainly being made in the right direction at present.

The FA Cup has bought a couple of moments of glory during exile. In 2012 they took football league side Mansfield Town to a replay, taking them to a penalty shoot out before losing 4-1. In 2004/05 they went one better - beating Walsall 2-1 before a disappointing 3-1 defeat to Yeading in the 2nd Round. This saw them lose out on a home tie against Premiership giants Newcastle United. That same season saw another great cup run - reaching the FA Trophy 5th Round before losing to Gravesend & Northfleet. Local honours include the Isthmian League Cup, won in 2005.

Famous people to come from or to have lived in the town of Slough include engineer Isambard Kingdom Brunel, singer Geri Halliwell, comedian Jimmy Carr, politician Alan Johnson, radio host Iain Lee, musician Gary Numan, actress Una Stubbs and footballer Lloyd Owusu. Due to its location close to Heathrow airport, several businesses are based here including Burger King, Blackberry, McAfee and Lego. The town has always been a haven for immigrants, right back to the 1930's when unemployed Welsh migrated here, in more modern times the majority of new arrivals have come from India, Pakistan and Poland, making it one of the most diverse towns in Britain. 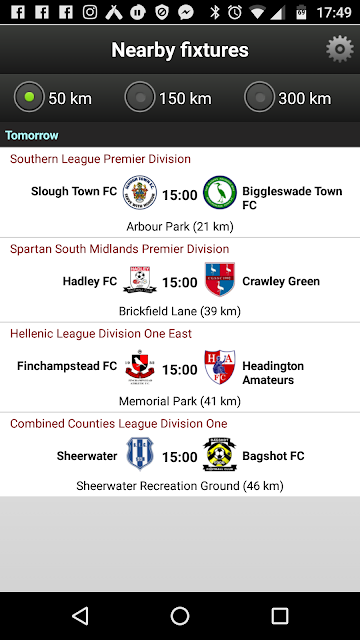 I was on my own this Saturday, so I was looking for something fairly local. An inital search threw up league games at Slough, Finchampstead and Sheerwater as grounds that I had not visited, but I really fancied an FA Vase game. However I changed my mind when I saw that the nearest ones were over 60 miles away and were awkward to tie in with a pub lunch. I'd initially dismissed Slough as I wanted to save them in case of an FA Cup game in later rounds, but with not a lot of choice elsewhere and the ground so close to Slough town centre, I decided that this would be my best option. I'd be able to tick the Slough branch of Wetherspoons and also look around their town centre, which was a pretty decent one from what I remember. In the dim and distant past my own team Wycombe and Slough were big rivals, and although I loved it when we beat them, I felt no malice towards them and always enjoyed my visits to their old ground Wexham Park, even for neutral games. 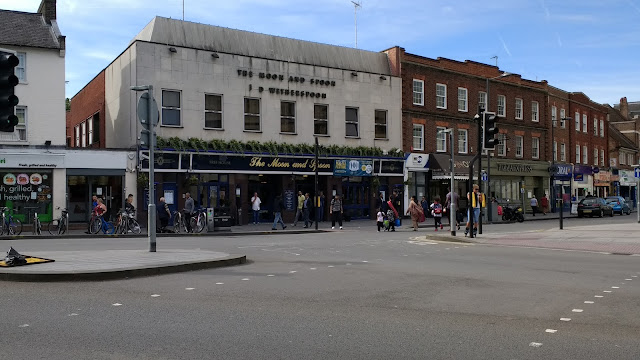 On the day of the game I awoke around 8am and spent the morning relaxing and looking at possible European destinations for my week off in November, without much success. I left home at 11.45 and drove to the ground, parking in a nearby side street and walking into town. After a look around the shops I went to my 110th Wetherspoons, which was called the Moon and Spoon. It was pretty average for the chain, but with the ever friendly pricing that Wetherspoons employ. I had a BBQ Chicken Panini with chips and a bottle of Hazy Hog for a fiver. From there I walked back to the ground, paying £10 to get in and £2 for a programme. I got some pictures of the ground before taking up a spot near the halfway line and waiting for the game to start. The match report from the non-league paper is below. 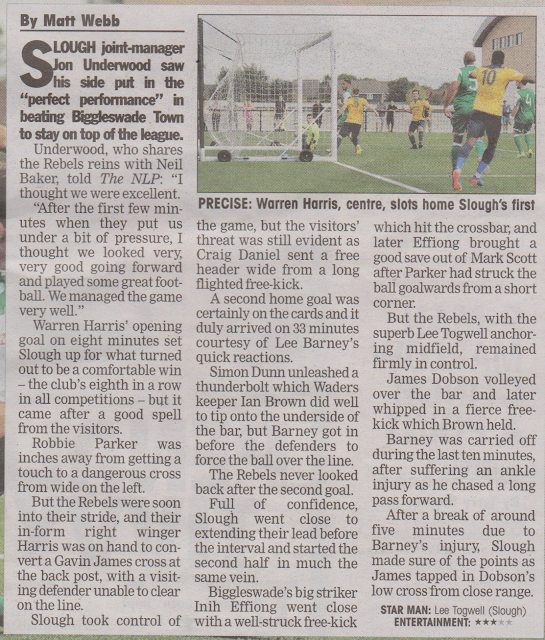 So it had been a good game, with Slough worthy winners and in truth they could have had more. Biggleswade did start brightly for the first 5 minutes and had they stuck an early chance away then it may have been a different story. The only blot on the landscape for Slough was the injury of Lee Barney who left the field on a stretcher. As a result, there was a fair bit of injury time and I didn't get back to my car until nearly 5. I was dismayed to see that both of my bets had lost, as had Wycombe, though in truth we ran Carlisle close up in Cumbria, and 1-0 isn't the end of the world in terms of results. It was a good drive home and I was back by 5.40. I spent the rest of the evening doing my blog and catching up on other things before watching Match Of The Day and going to sleep. 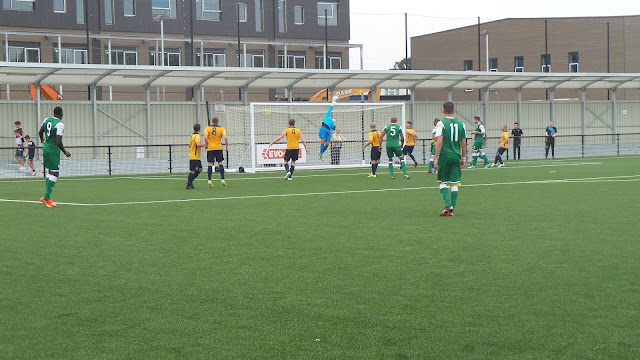 ARBOUR PARK is in a great location around 20 minutes walk away from the town which has a Wetherspoons and loads of other takeaways and pubs. Nearer the ground there are a number of takeaways though I didn't see much in the way of pubs. Back at the ground there is a bottle and can bar as well as a burger van and snack bar though I didn't try either. There's a table selling club merchandise near the entrance. The programme was £2, printed on decent quality paper and had a number of interesting articles in it.


The ground is very much a work in progress. As with so many modern grounds there is little official parking, though this is mainly due to building work in this case. If you are clever though you can use Google Maps to find street parking - in my case I used Myrtle Crescent which was 5 minutes walk away. The ground itself has a narrow terrace at each end of the ground although these stretch the width of the pitch and have around 700 capacity each. There is a smaller seated stand which holds 150-200 though what looks like the main stand is in the process of being built. Overall, it's a good start, but it will be better when the main stand is finished and the club shop is expanded. There was also a lack of signs letting people know whose home it was, and a few of them will make it feel more like home. 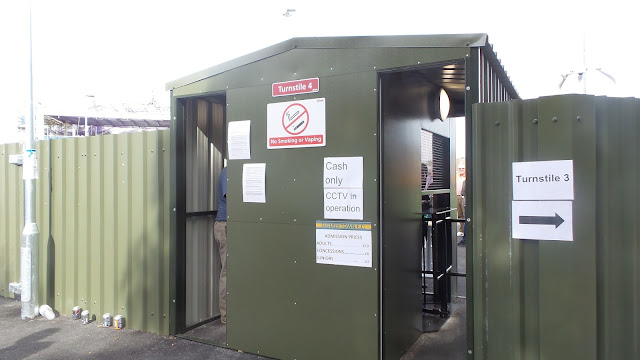 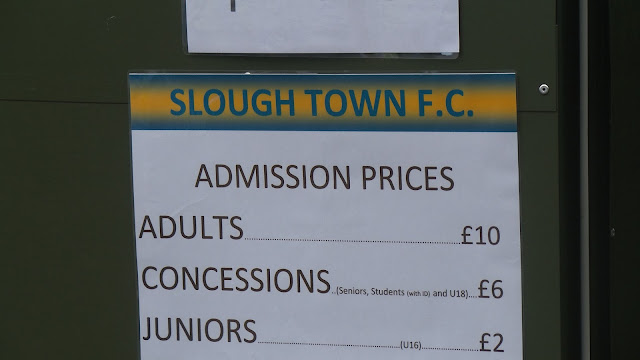 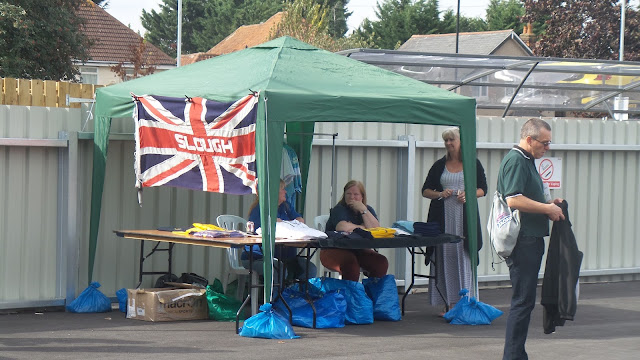 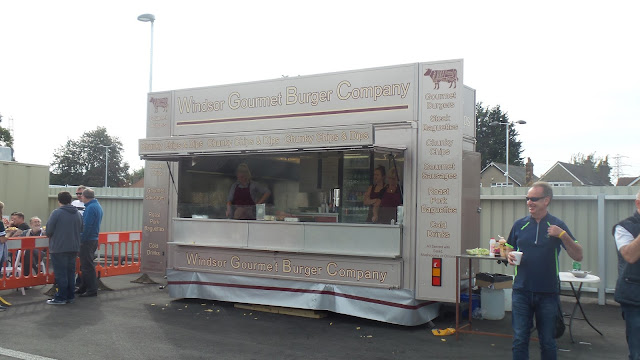 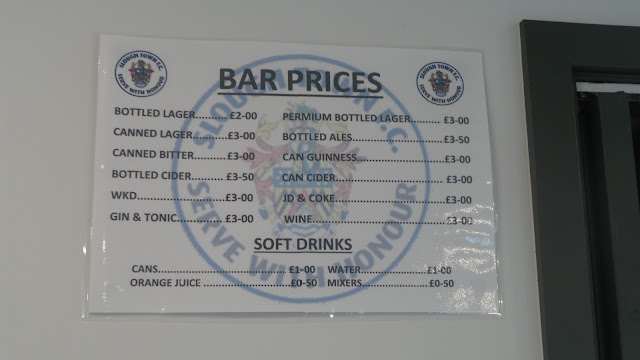 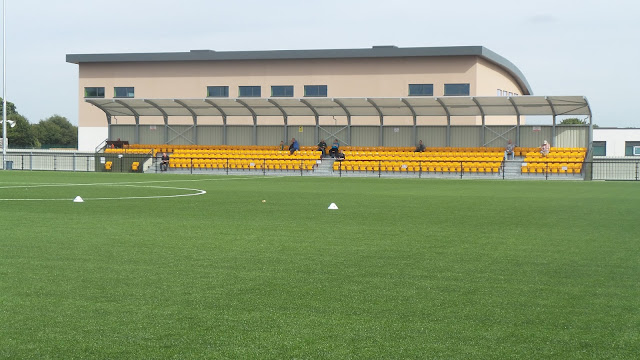 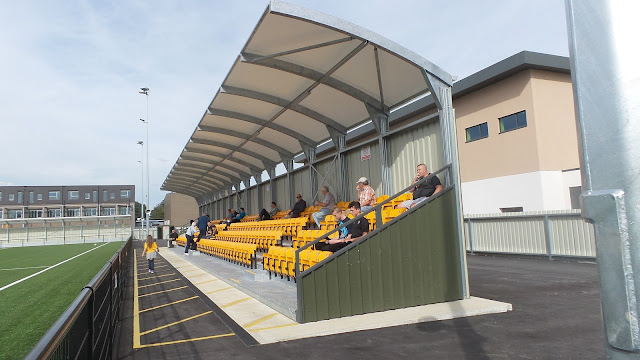 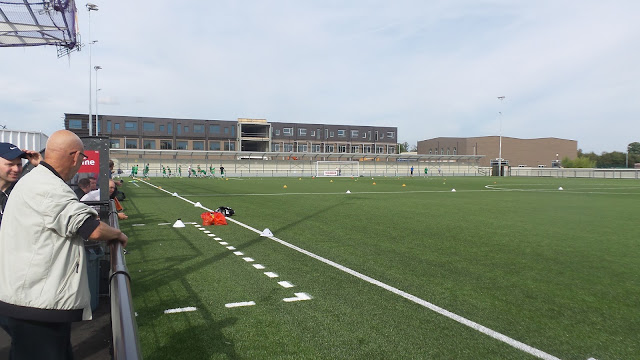 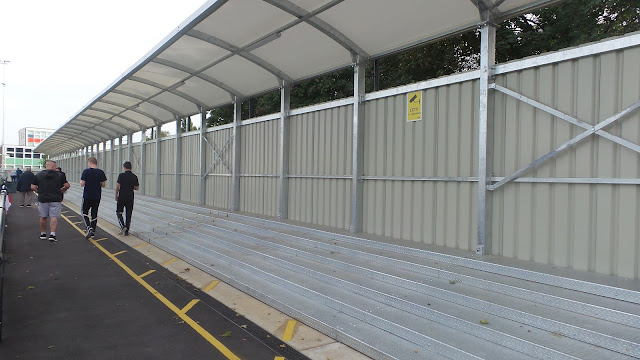 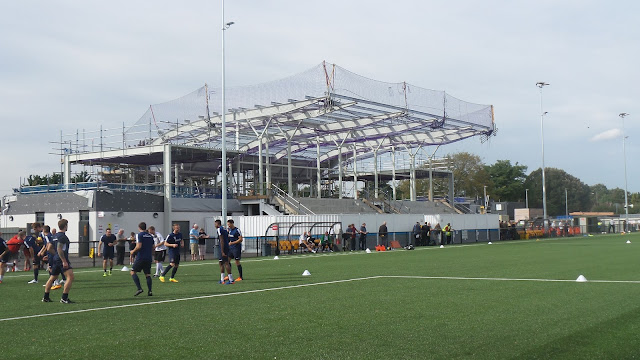 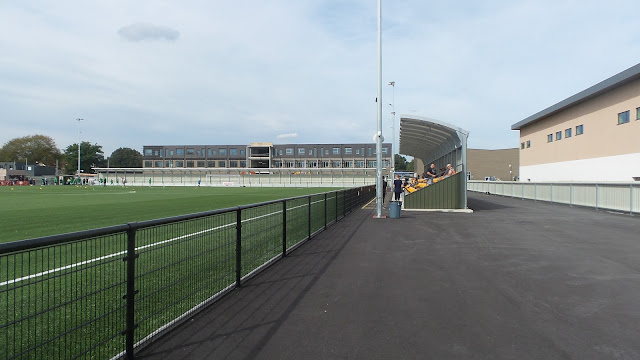 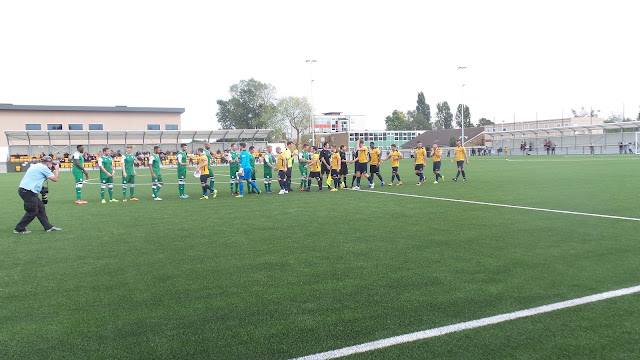