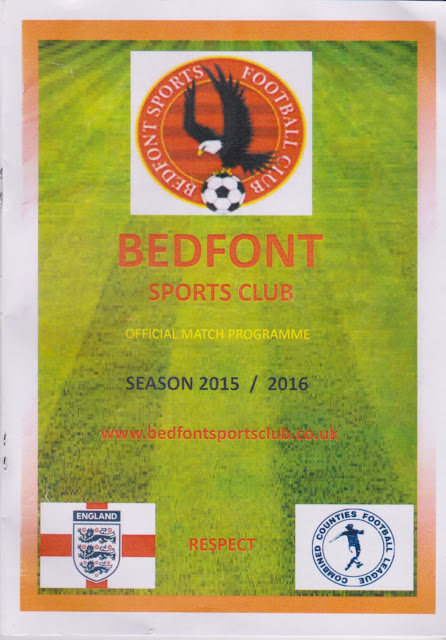 BEDFONT SPORTS are a fairly new club, having been formed in 2002. They joined the Hounslow & District League upon formation, winning it at the first attempt. In 2004 they joined the Middlesex League, having great success during their 5-year tenure there. In 2009 they joined the Combined Counties League at Division 1 level. 3 seasons were spent in the lower tier before a runners-up spot behind Guernsey in 2012 was enough to earn them promotion to the Premier Division. They've been there ever since and although they've never been close to being relegated, they've not managed a top half finish yet either. Last seasons placing of 13th represents their joint best-ever finish. They are currently having an excellent season, sitting in 5th after the weekend fixtures, while opponents AFC Hayes were struggling in 20th place. 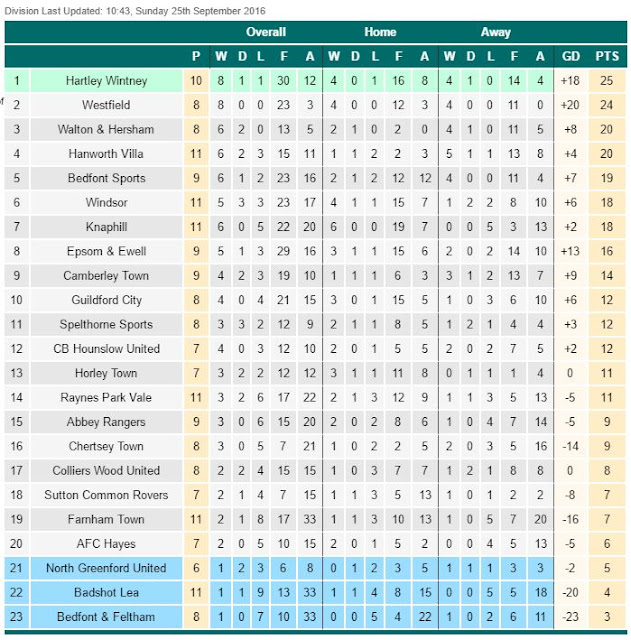 In the FA Cup the record progress has only been the Preliminary Round, a feat that they've achieved on 3 occasions - the latest of which came this season when they lost 3-0 to Slimbridge. It's also a trip of appearances in the FA Vase 1st Round, though they are still in with a chance of matching or bettering that this season as they won 2-0 away at Wellingborough Town in the 2nd Qualifying Round at the weekend. In terms of local cup honours, the Middlesex Premier Cup was won in 2010. 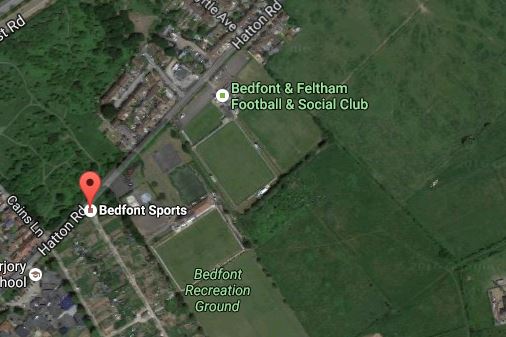 I'd only arranged to go to this clash on the afternoon of the game. I'd searched for local games in my Groundhopper app and it had thrown up Bedfont Sports v AFC Hayes. I'd initially thought they shared at Bedfont FC, but I was wrong as they played next door. It would be a nice reward as I'd had a hard day at work, though the previous nights football had cheered me up. After going on a long run without much success, we absolutely trounced 5th placed Crewe 5-1. It was our best performance and the first time we had scored 5 in a game since the late 1990's. We moved up to 19th place as a result,which emphasises how much of a shock result it was. I'd had to park a while away from my house and so it was 6.10 by the time I left. Amazingly the roads were pretty perfect, even the dreaded M25 and I was there by 6.50. 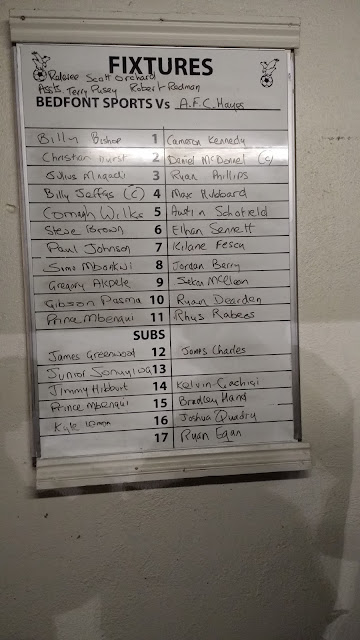 After finding a spot to park I want and waited for the turnstile to open along with a number of other hoppers. I met 'Lesta Blew Hopper' that I know from Twitter and we had a brief chat before going in. Entry was £7 including my programme which was pretty much the standard rate for this level. I got some pictures of the ground and caught up online while I waited for the game to kick off. Bedfont Sports started the strongest but both sides had chances. It was the visitors who took the lead on 25 minutes - a long kick from the keeper found a visiting forward who chipped the home custodian and had the simple job of finishing into an empty net. It was slightly against the run of play but it stayed that way until the interval despite the hosts having a couple cleared off the line. Again they started the second half on the front foot but the visitors extended their lead with a chance on the break, around an hour into the game. It was a lovely strike too,  Jordan Berry's low shot from outside the area clipping the left-hand post on the way in. More often than not Bedfont were found lacking in the final third,  but Paul Johnson did grab a late consolation from close range after a square ball was played across the 6-yard box following a drop ball that had been keenly won on the left. 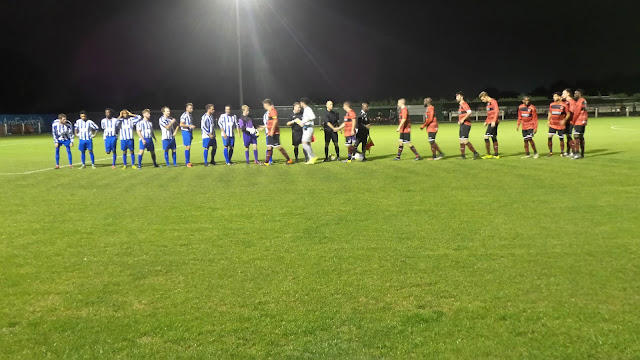 So for the second night in a row, the 5th placed team in the league had gone into the game as clear favourites, but had come out defeated. Though this wasn't as convincing as Wycombe's win over Crewe and Bedfont Sports had had a lot of domination, AFC Hayes had done a good job on the hosts. They'd defended stoutly and their keeper had made several food saves, but they'd also finished very well, especially for their second. It was 9.40 by the time the game had finished and so I made my way home. It was another good journey home and I was back home in 35 minutes. I watched TV for a bit before going to sleep just before midnight. 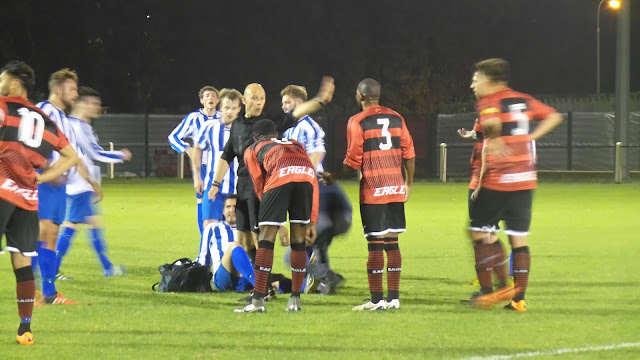 I wasn't expecting much when I made my way out to the ground, as most clubs that have progressed from local leagues have just plonked a metal 'Arena' type stand at the side of the pitch, and no solid structures. Though there was one of those said stands at one end of the pitch, there was also cover on all 4 sides. That metal stand holds just over 100 fans and is the only cover at the left hand end. Opposite is a mixture of seating and standing, with around 70 seats and 200 covered standing. The seats, as with man other clubs around this way have benefited from the closure of a lot of the olympics venues and this stand features seats from the Aquatics centre. Letters saying 'WELCOME TO BEDFONT SPORTS' have been added on the bottom of the seats to add a personal touch. The other goal has covered standing for around another 200 whilst the remaining side is the one that you come in through the turnstiles. This has what looks to be an original seated stand, situated down one end and holding 50 fans. There is also cover via an overhang at the front of the clubhouse, adding another 100 under cover.

The facilities at the ground are pretty good too. The tea bar offers hot food such as burgers and hot dogs at reasonable prices, along with drinks and snacks. The clubhouse was doing a brisk trade when I visited and was showing the live football from Sky. They had a fairly standard range of drinks including Stowford Press though I'm unsure of prices as I didn't indulge. The programme was well priced at £1, but didn't have a lot to read in it. This friendly club is well worth a visit, especially as they have the good sense to play on Wednesday nights, therefore attracting a decent number of hoppers on a fairly quiet night. 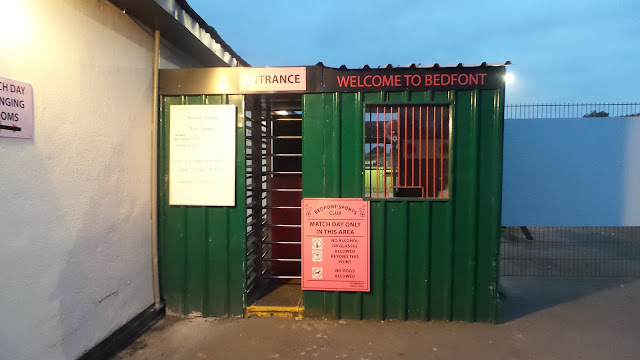 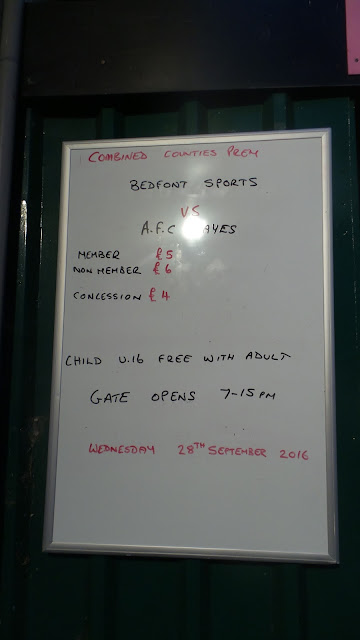 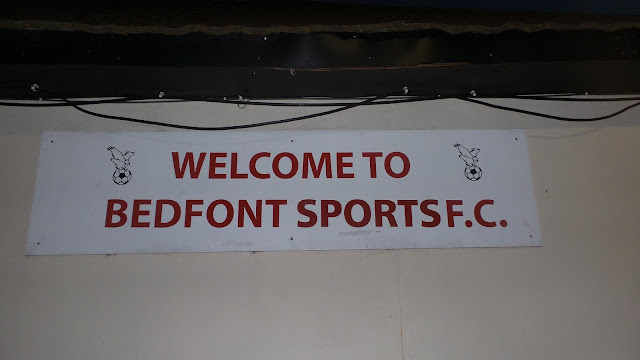 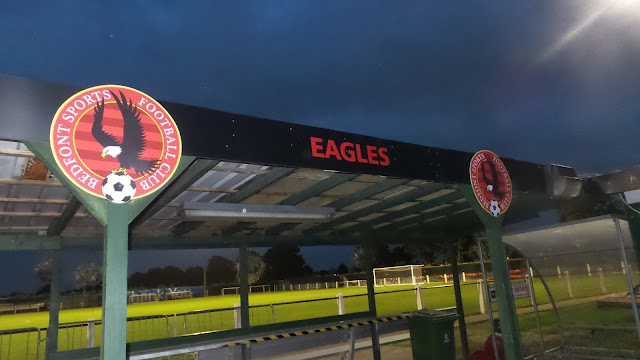 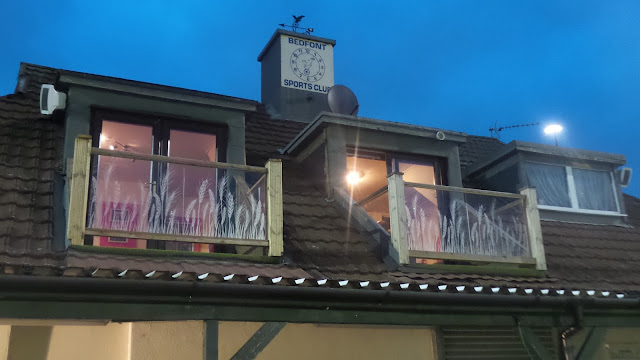 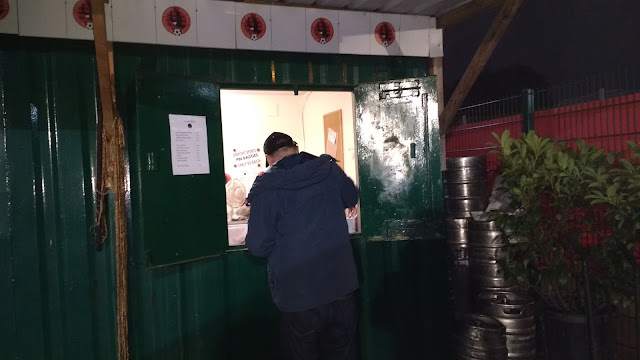 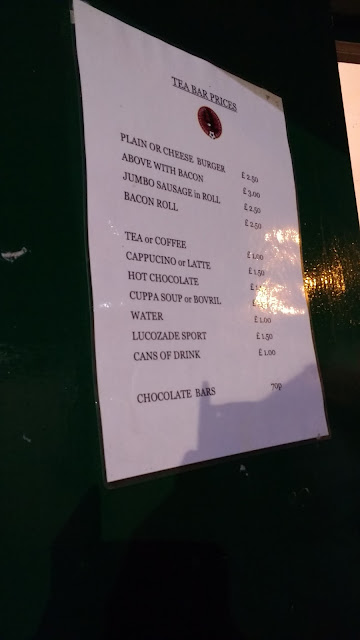 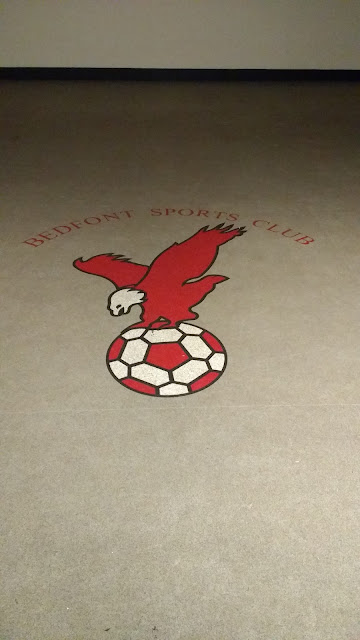 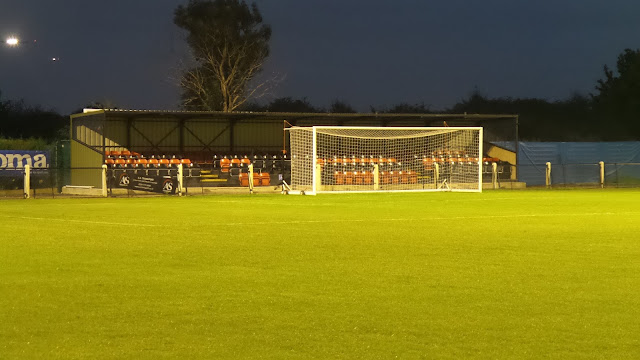 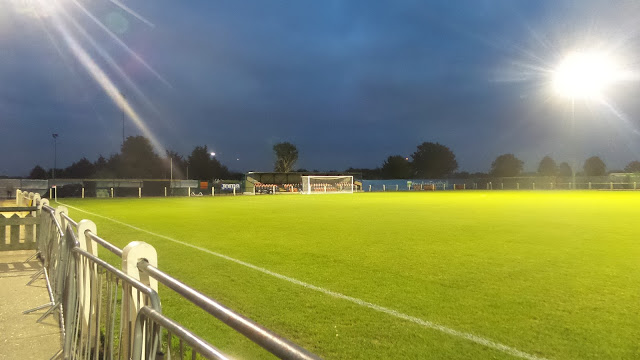 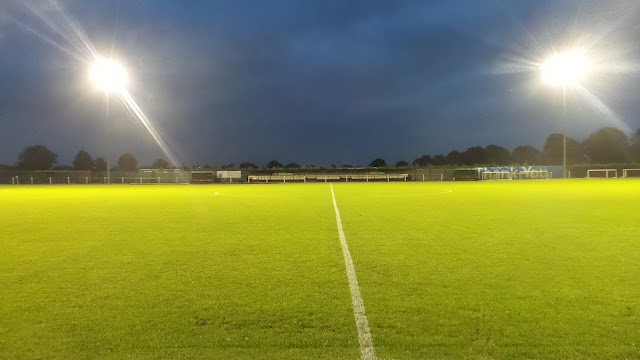 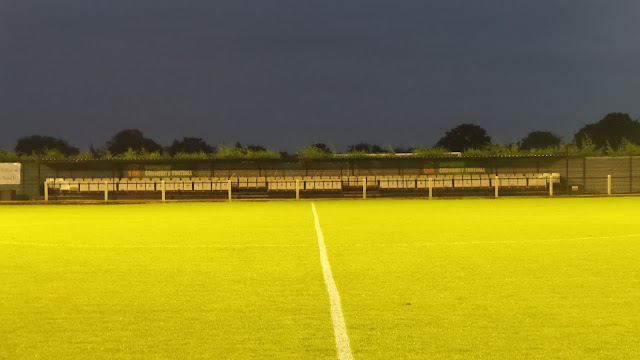 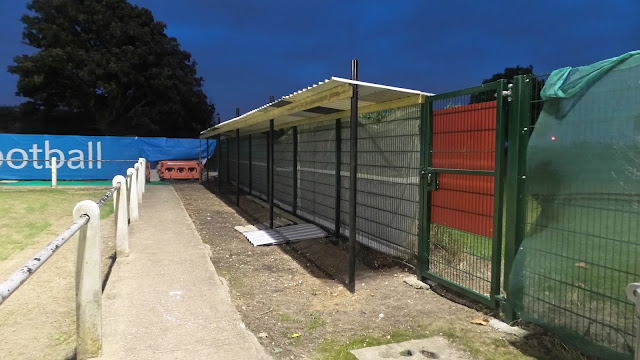 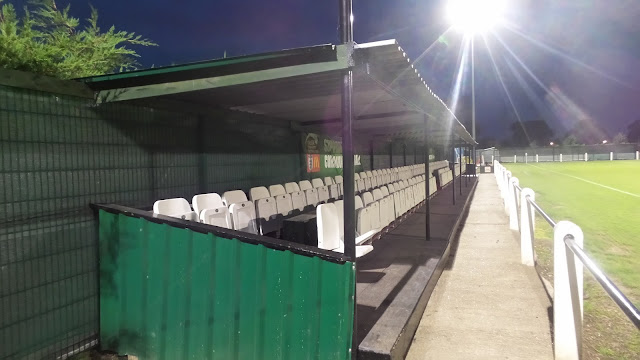 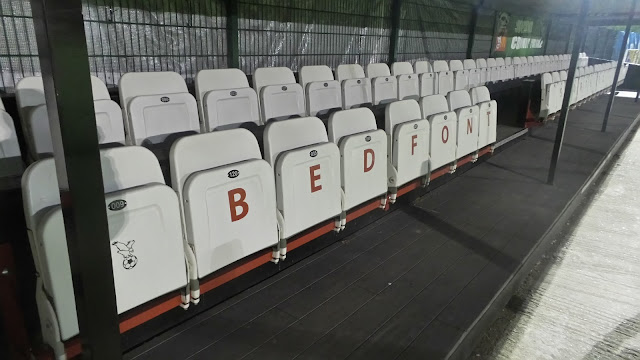 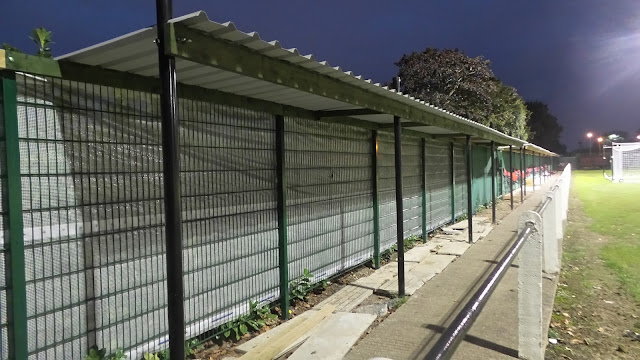 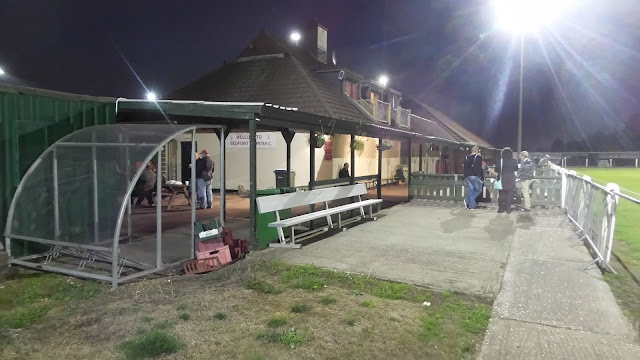 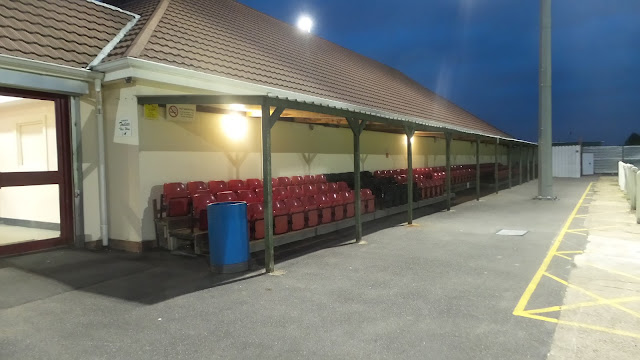