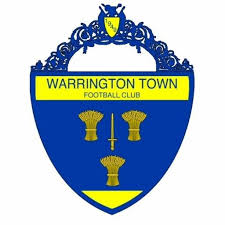 WARRINGTON TOWN FC was formed in 1949 under the name STOCKTON HEATH. Starting in the Mid Cheshire League they were founding members of the North West Counties League in 1982. At the time the league had 3 tiers, with Warrington starting in the bottom division. Runners up to Colne Dyamoes in their debut season earned them promotion to Division 2. After a series of well-placed finishes, they earned promotion again in 1987, this time as runners up to Droylsden. They were champions of Division 1 three years later and this earned them promotion to the NPL Division 1. Though they did well at first, the mid 90's saw a period of struggle which saw them relegated back to the North West Counties League in 1997. Things didn't improve though and they suffered a double relegation. It would be another few years before they recovered but in 2001 they were promoted back to the North West Counties D1. Lessons were learned and a few seasons later Warrington were back in the Northern Premier League, owing to the expansion of non-league following the introduction of the Conference North & South. Since then, their best finish came in 2014 when they finished 3rd, but lost out in the playoffs to Bamber Bridge.

It was the FA Cup where Warrington Town came to the attention of the nation Last season they beat Exeter City live on TV in the FA Cup 1st Round. Though they lost in the 2nd Round to Conference side Gateshead, they can be proud of a run that started in the Preliminary Round back in August, playing 9 games in all. Another memorable cup run in the 1992-93 season saw a run to the FA Trophy quarter-final where a defeat to Sutton United meant they just missed out on meeting the Conference champions Wycombe Wanderers in a 2 legged semi-final. Warrington also reached the FA Vase Final in 1987 where they lost to St Helens Town. There have been multiple wins in local competitions, most recently the NPL Challenge Cup last season.

When planning what week off to take from work, a big part of my decision was based on what I was going to do during the afternoon. Last time I was off during October, I'd gone to see a game in the Northern Premier League Academy League. In a game played at Kidsgrove Athletic, the hosts beat Warrington Town 7-4 despite being 4-1 down at one point. It was a highly entertaining game and a lot better than a lot of the tepid affairs that tended to occur in youth and reserve football. So when I saw there were a full set of fixtures on this particular Wednesday, I booked it off. Originally there were 2 choices - the other being Belper Town. As it turned out, Belper had their game postponed and out of 6 games it was only Warrington and Mossley that managed to get their games on, so luck was on my side for once. Not that something that could be said of today's hosts - despite looking decent when I last saw them, they were rock bottom of the league with no wins prior to today's game. I woke up at 8am having had a good night's sleep and after having a shower and getting dressed tried to find out information on today's game. I assumed that it would be on and would be at their normal home ground. I left Blackpool at 10, getting to Warrington an hour later. As the ground was a fair way from the town I parked in Sainsbury's and walked into town. After a look around various shops, I went to the local Wetherspoons for lunch, having a burrito and Strongbow for lunch. I checked the NPL Academy twitter and it seemed as if Warrington had been the only game that had not fallen victim to the weather. Despite it hammering it down on my way down the M6, there had only been light drizzle in Warrington itself. 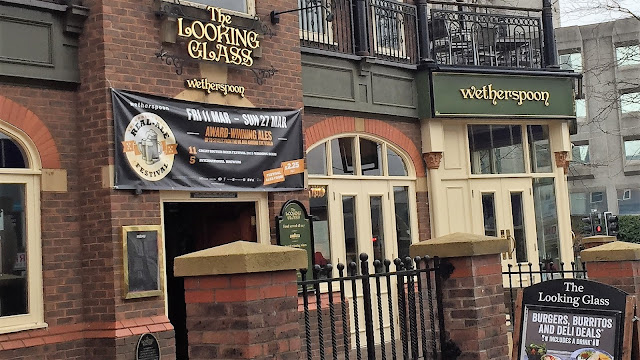 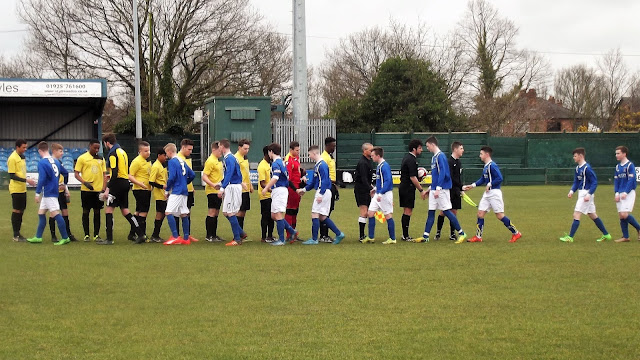 I drove back to the ground, arriving at 12.40. I was reassured when I saw the Sutton Coldfield Town team coach there and got chatting to a friendly Warrington fan who was also a groundhopper and Wetherspoons enthusiast like me. Last time I'd seen the Warrington youngsters was at Kidsgrove when they had lost 7-4 and I was hoping for a similar goalfest this afternoon, though maybe with the score in their favour this time. The groundsman, who had done an excellent job keeping the pitch in top condition given the weather, was not keen for the game to be played. But in the end, he had no choice and thankfully I'd not had a wasted journey. Warrington took the lead early on. 3 minutes in and Josh Brown picked up a loose ball and slotted home from close range. On 32 minutes the lead was doubled - this time Euan Woods' shot into the bottom right-hand corner with the visiting keeper only able to get fingertips on it. They didn't help their cause when the referee forced them to substitute their number 11 after he got involved in a fracas. A couple of minutes before half time it was 3-0 when Aaron Woodward's low shot was fumbled by the visiting keeper following a free-kick routine. The second half started in much the same fashion and on 62 minutes it was 4-0 following Euan Woods' speculative shot that flew in. 70 minutes gone and it was 5-0 when a pass back to the keeper was charged down with the ball ending up in the net, with Woods completing his hat trick. To add to their woes Sutton Coldfield even had a penalty to deny them a consolation with just over 5 minutes to go. It had been another decent contest and best of all it had been free entry too. The result lifted Warrington off the bottom of the league but it left me wondering how it had taken so long to get their first win of the season, especially when they had played teams in the top half of the table both times I had seen them - and played well. I left the game and headed off to what I thought would be an evening game at Hucknall Town, though the weather changed my plans in the end. 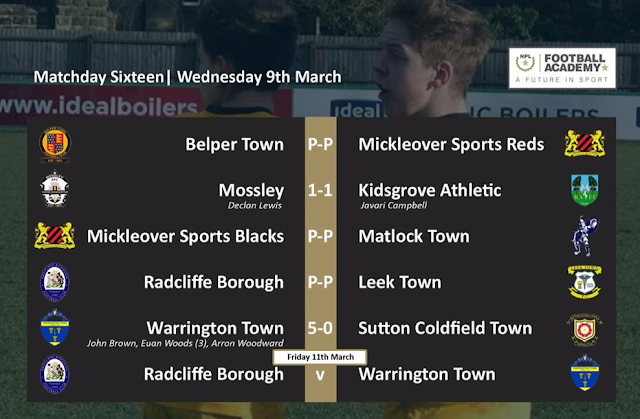 Cantilever Park is a decent ground which almost certainly would be good enough for step 3, if not the Conference North. There is covered seating for around 250, plus about 400 covered standing spaces with the rest of the ground being open. As it was a low key game I didn't get to sample any of the tea bar or clubhouse but the club shop looked decent with lots of old programmes and books on sale. Further afield there is a chippy near the ground and the town is just over a mile walk away. 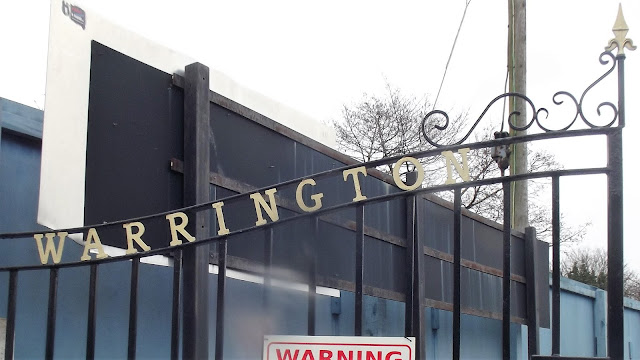 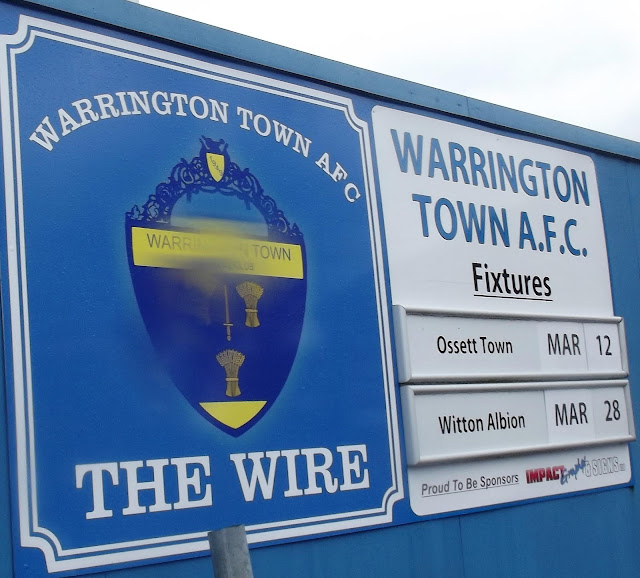 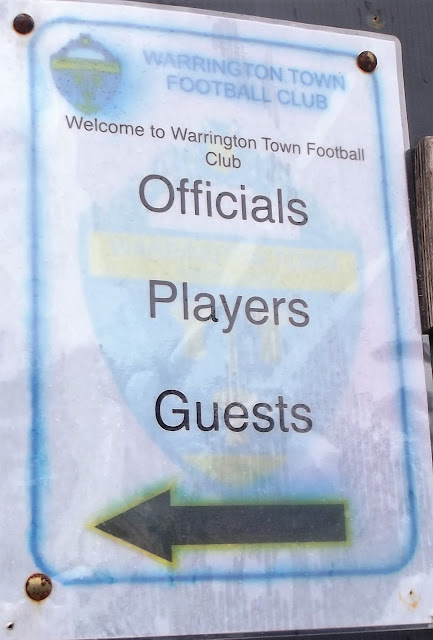 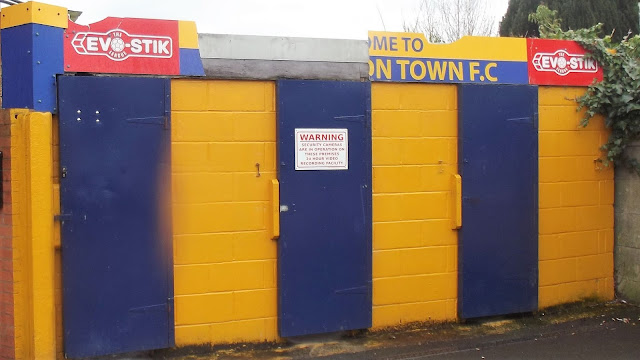 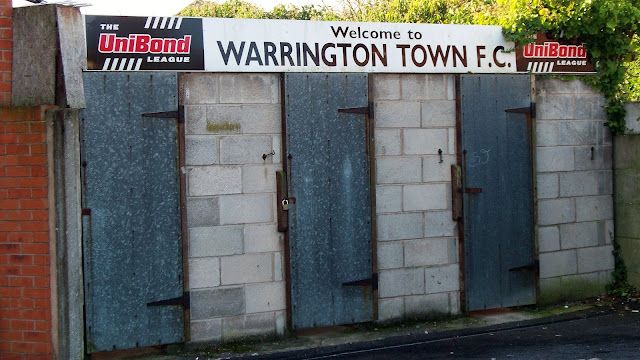 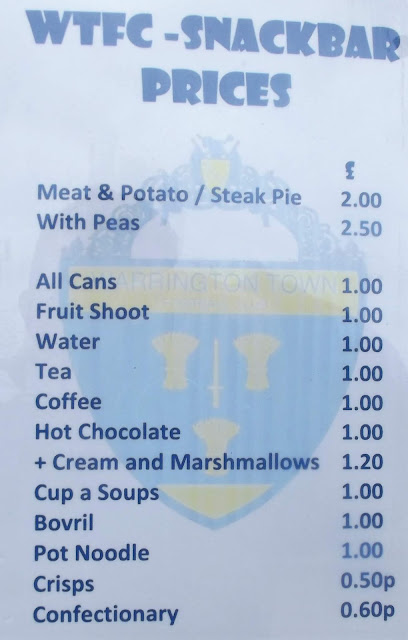 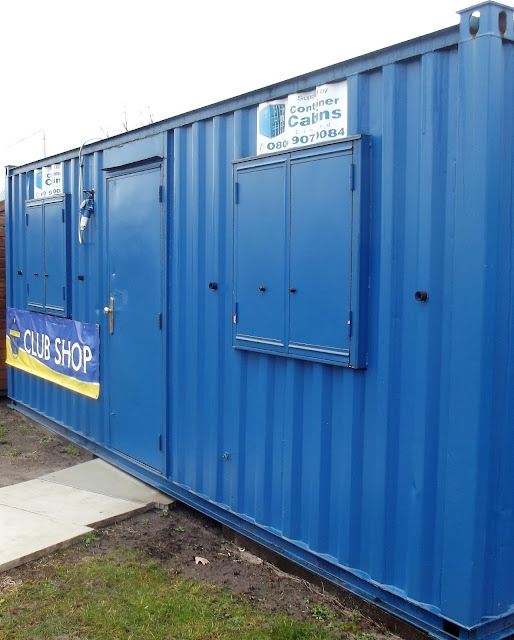 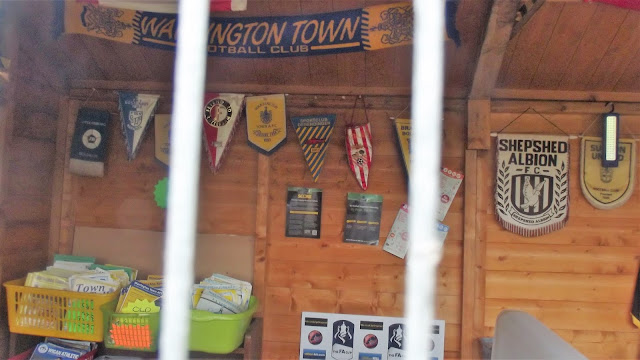 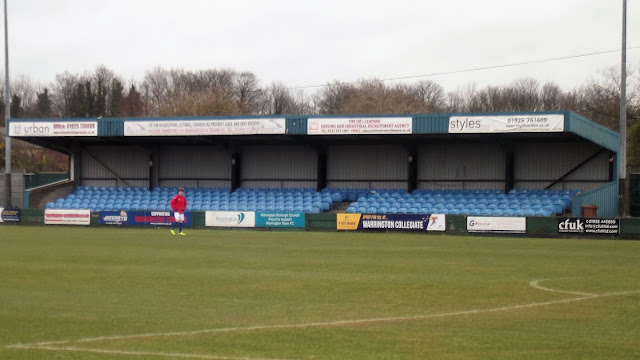 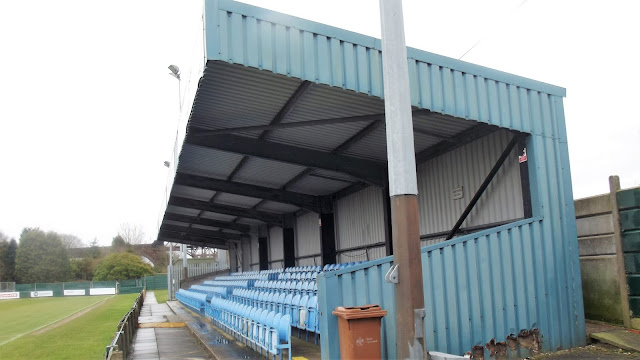 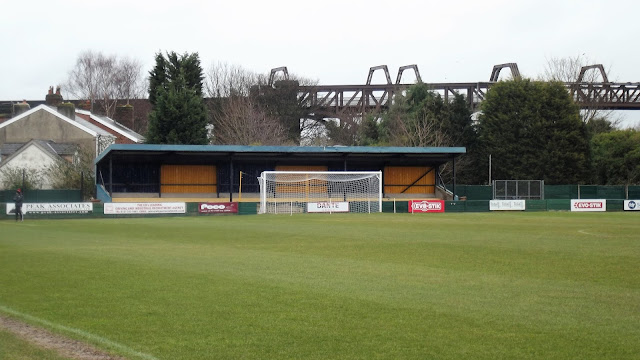 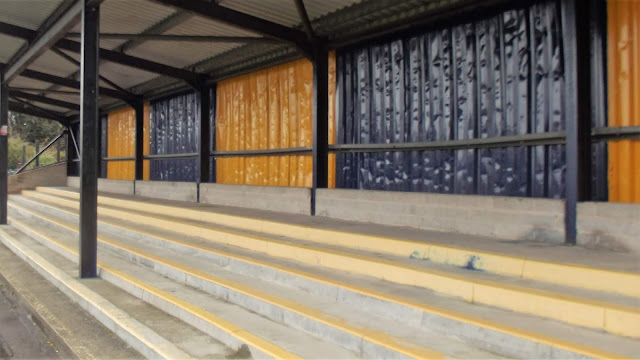 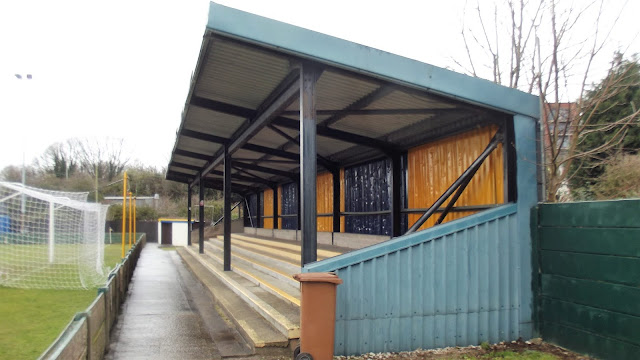 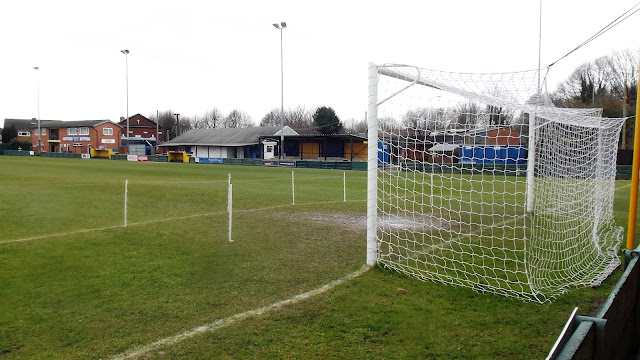 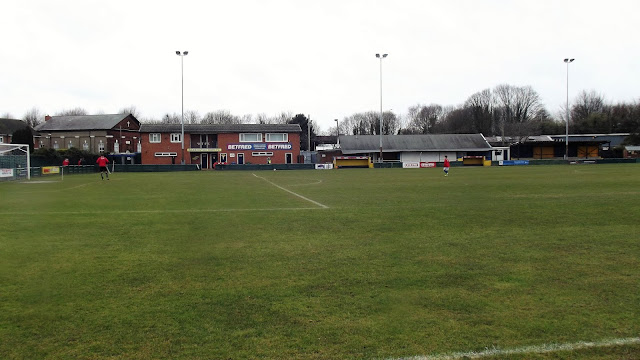 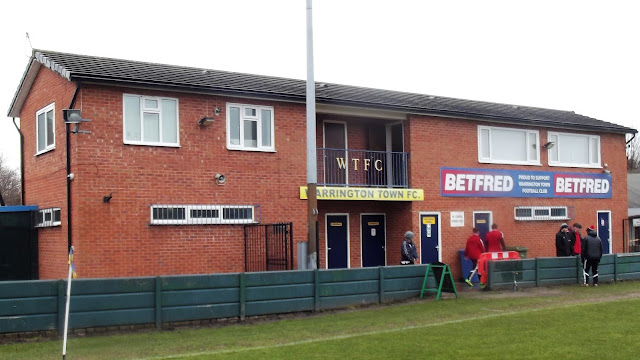 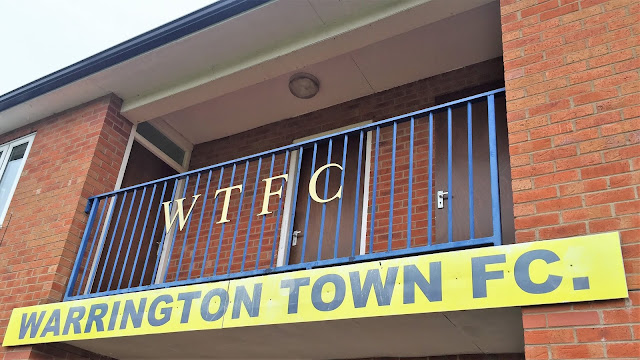 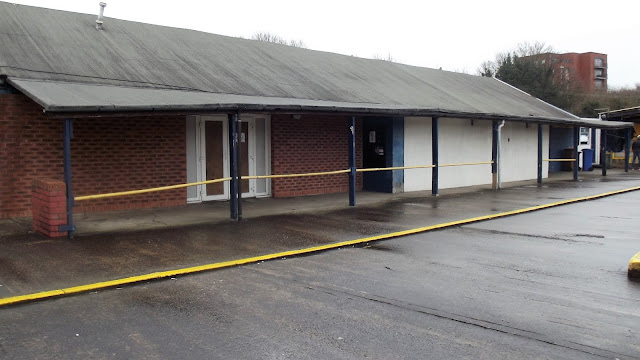 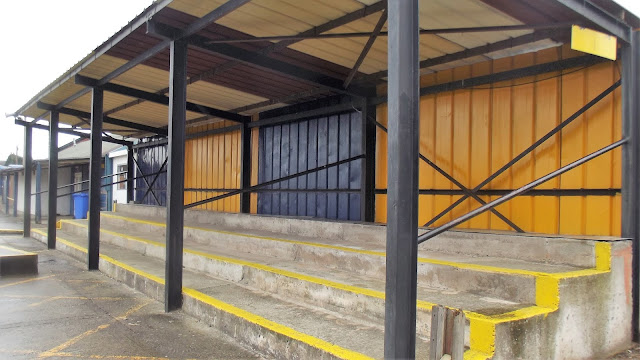 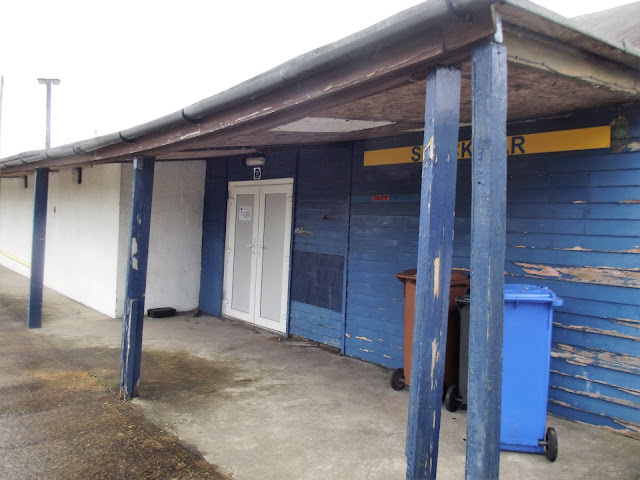 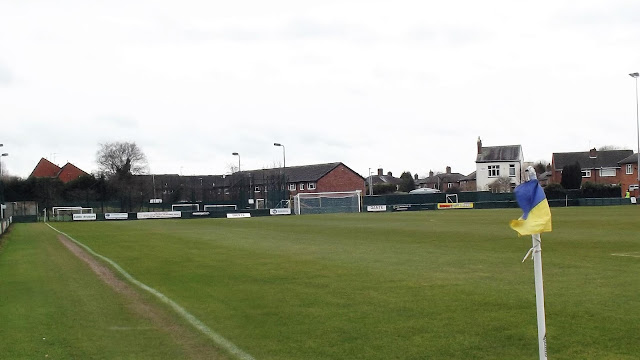 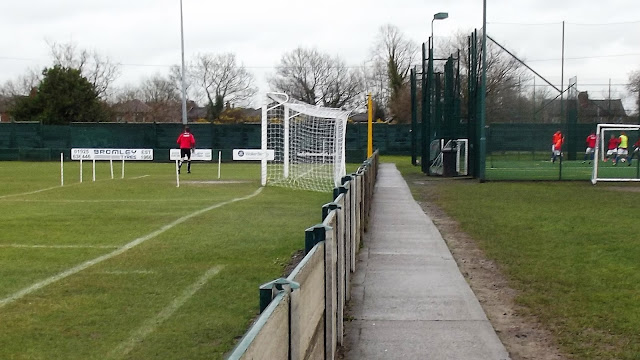