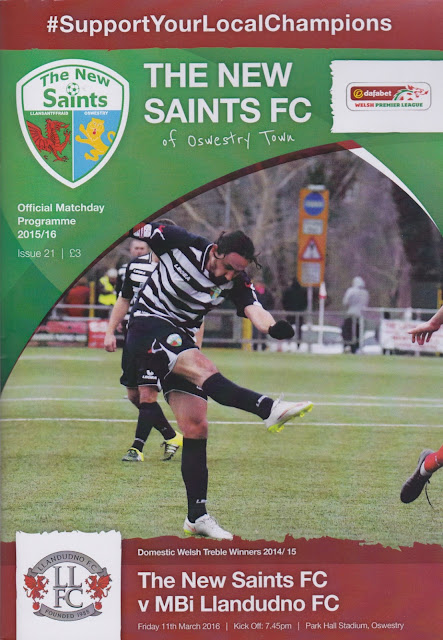 
THE NEW SAINTS - A BRIEF HISTORY

THE NEW SAINTS were founded in 1959 and were initially called LLANSANTFFRAID. They started in the Montgomeryshire Amateur League, a competition that they won 7 times. Promotion to the mid-Wales League came in 1989 and another promotion saw a rapid rise through the Cymru Alliance and into the Welsh Premier League. Changing their name to TOTAL NETWORK SOLUTIONS as part of a sponsorship deal bought in plenty of funds and to date, they have won the Welsh Premier League 9 times, with a 10th likely at the end of this season. Currently sitting in 1st place with a significant lead, they would, however, have some kind of test tonight as they faced 3rd placed RBI Llandudno.

Changing their name to The New Saints in 2006 has not hindered their progress, and they have also been very successful in cup competitions. 5 times winners of the Welsh Cup, 7 times winners of the Welsh League cup, they also have a load of other local honours to their name. Though they have been dominant domestically, Europe has proved a tougher nut to crack. They've only progressed a few times, with the latest season, where they beat B36 Torshavn before narrowly losing to Hungarian side Videoton was probably the highlight, with them gaining a 1-1 draw in Hungary. They've also played Premiership giants Liverpool & Manchester City in recent times. 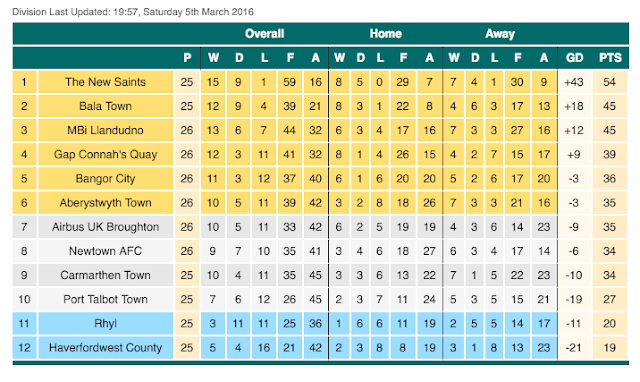 At the end of my week off from work I'd been planning to go to Moneyfields in Portsmouth last night, then Long Melford in Suffolk tonight. However finances dictated that I could only attend one, originally I was erring towards Moneyfields. However, after looking at the fixtures I decided on a different game altogether, namely the Welsh Premier League game between TNS and RBI Llandudno. This was due to fellow groundhopper Chris offering to come and help out with fuel costs, which would be a great help. I'd come close to visiting TNS on a number of occasions, as they played Friday night and I'd also wanted to see them play in Europe but couldn't get tickets, or the venue was switched. I was hoping for better luck car wise than the last time I gave Chris a lift. On the way back from Ollerton a couple of Tuesdays ago a fox badly damaged my car by messing about on a dual carriageway and as a result, I was still using a courtesy car as there had been problems getting parts for the repair. I wasn’t too fussed - a slightly reduced fuel economy was offset that I’d be putting the mileage on a car other than my own. On the day of the game, I spent the morning relaxing at home and getting this blog prepared for tonight. I also ordered PES 2016 for the PS3 for £18.85 as I read that you got the Euro 2016 game for free via a download. I left home at 2.45 and after stopping for petrol I was in Milton Keynes to meet Chris at 3.55. 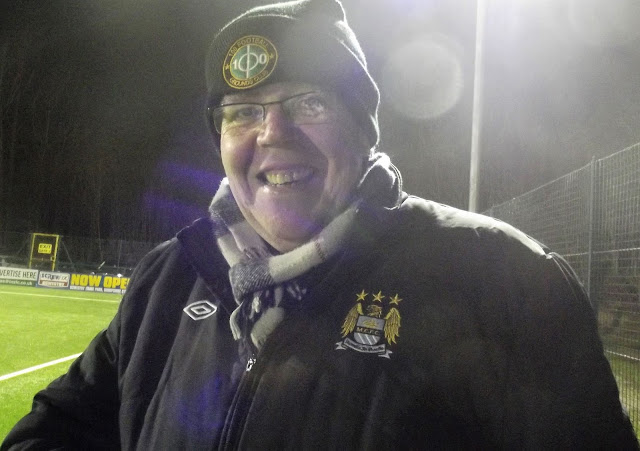 Ten minutes later and we were on our way. I’ve had a bit of luck with traffic recently, but not on this occasion. There were delays on the M1 due to congestion and drivers practising bad habits such as needless braking and slowing down. Then on the M6 near Bedworth & Coventry, there was an ambulance on the hard shoulder and a load of cones closing a small area of lane 1 which caused even more delays. The M54 and most of the A5 were good until we got stuck behind a slow-moving tractor for the final 5 miles. All told we had 1 hour 15 minutes delay, getting there just after 7.15. After parking up we set about finding where the programmes were sold. The set up was very odd with all the facilities being part of the bowling complex, so amongst the football fans, there were kids parties and the like. There was a viewing balcony from the bar but to get into the ground you had to pay at the turnstile. After paying £8 to get in and £3 for a well presented, if a little overpriced programme, we were glad to see we could get up to the bar. The food looked pretty basic down in the ground, so we made our way up to the bar. The menu looked very decent, but after hearing that Man City fanatic Tony had been waiting for 30 minutes and still not got his food, we decided against it, especially with 15 minutes to go until kick off. We did have a pint though and it was a big disappointment on the cider front. Despite Wales making some great cider and the menu promising ‘great local produce’ all they had was Strongbow on tap and Bulmer's blueberry in bottles. The real ale situation was not much better for Chris, though he did at least get a local Shropshire one, albeit in a bottle. The stewards downstairs were pretty friendly and helpful, but upstairs it was a different story for the nosey 'Valley Security' guys. They were strictly enforcing a ‘no drinking within sight of the pitch rule’ and later on they were chattering into their walkie talkies trying to force people who were outside the ground smoking to put out their fags and come inside the ground. Llandudno had bought decent support along with them. In particular, a group of youngsters gave vocal backing to their team from the first whistle to the last. 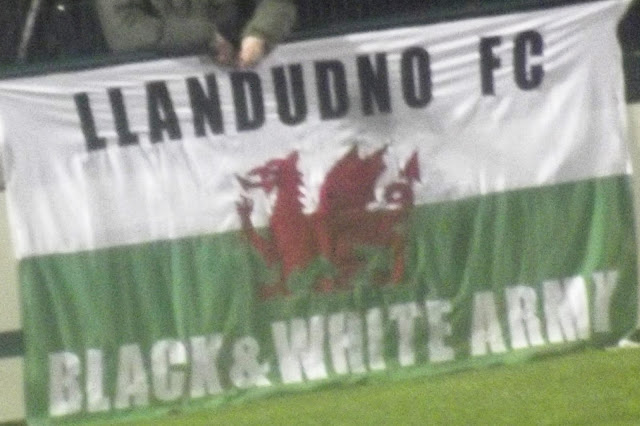 Sadly for them, there was only really one team in it in terms of clear cut chances. Just before half time, Ryan Brobbel set up Jamie Mullan and the winger finished from just inside the area to give his side the lead. The lead was doubled on the hour mark thanks to Polish winger Adrian Cieslewicz whose close-range finish wrapped the game up for the hosts. Llandudno trued their best, but were really restricted to chances on the break as TNS’ impressive unbeaten home record was left intact. Despite the dull fare on the pitch, it had been a good evening chatting to Chris, as well as Tony who had bought his son along. Naturally, it was all football talk and I took great delight in reminding Tony of the time Man City were in the third tier and Wycombe did the double over them in the league. We’d only had a sausage roll during the game, so still hungry I drove to Oswestry to see what was open. There was plenty of choices, but we settled on a Chinese takeaway called ‘Lucky Star” There I had salt and chilli beef & chips while Chris had some kind of chow mein thing. There were more delays on the way home, what with parts of the A5 and M1 closed which added 20 minutes onto the journey. I dropped Chris off at 12.35, getting home myself at 1.15. I was pretty tired by then, so I had a bottle of Franklin’s Fuddle cider while watching Youtube videos before going to bed half an hour later. 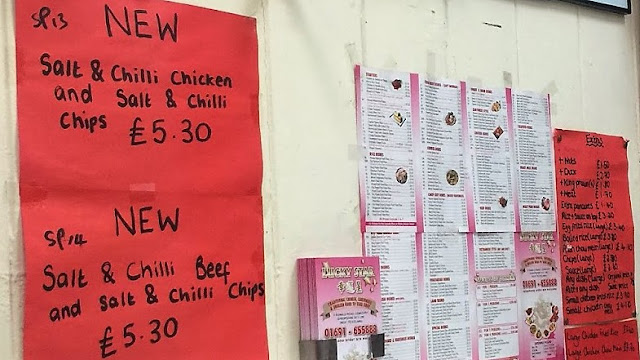 PARK HALL is a bit of a mixed bag as far as grounds go. Like many Welsh grounds, the emphasis on seats shows in the covered accommodation so as to meet the rules for European participation. There are 1000 seats in all, split between 2 temporary stands. The one behind the goal is not bad, with a metal roof and green seats but the one next to it has a canvas roof and red seats. The rest of the ground is open hard standing. There’s an interesting looking TV gantry on the far side, whilst the floodlights are very decent. The balcony offers the best view of the action and is freely accessible to all fans. On the catering and drinking side, it’s all a bit soulless and corporate. Pre-heated burgers and pastries are served from a hot cabinet, though there is better food upstairs. Oswestry has a decent selection of places and is 2 miles away. There wasn’t a club shop that I could see, though there were a few things in a glass cabinet with no idea of pricing. Overall with the 5G pitch you can be sure of the game being on, so a cold evening is an ideal time to visit, so you don’t have a wasted journey. 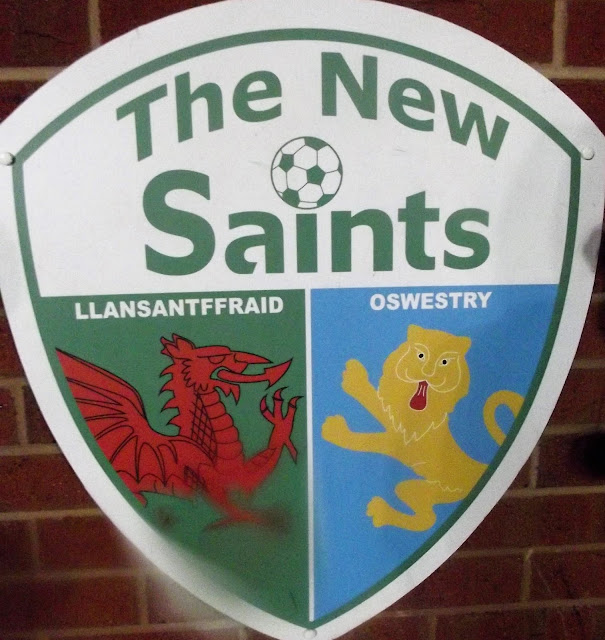 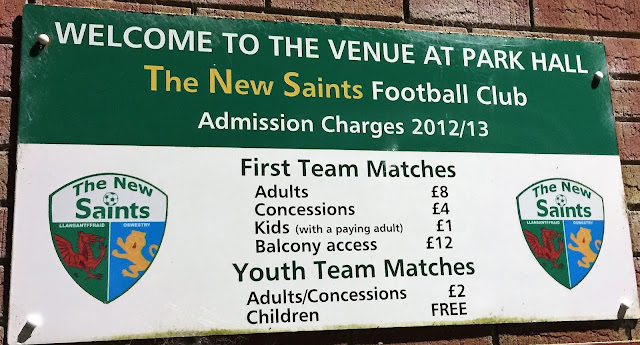 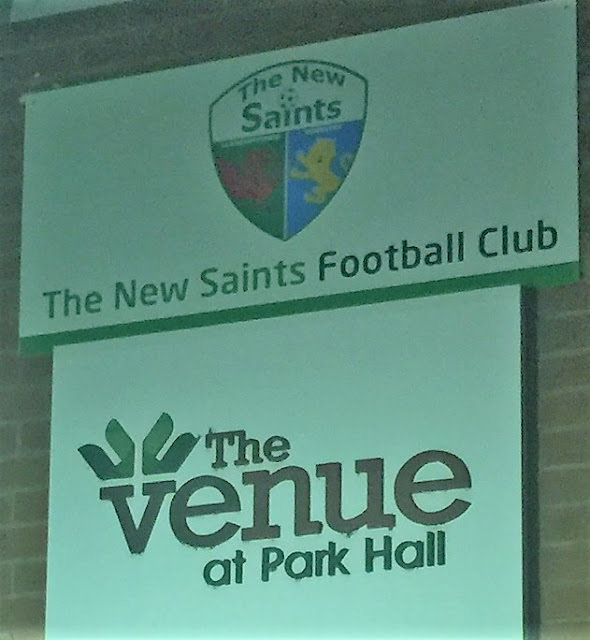 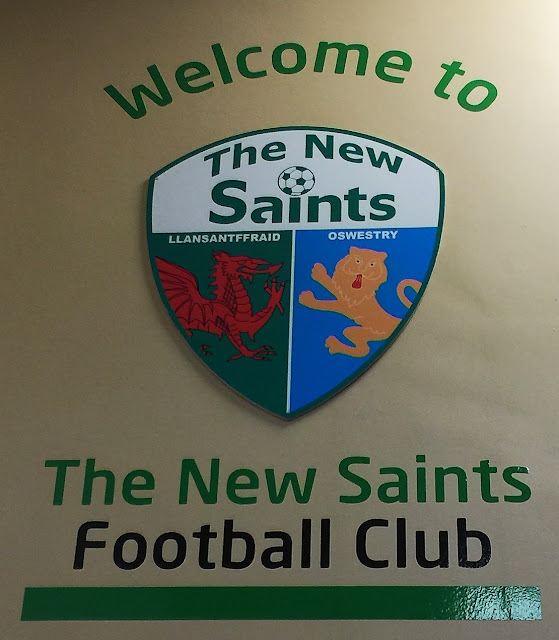 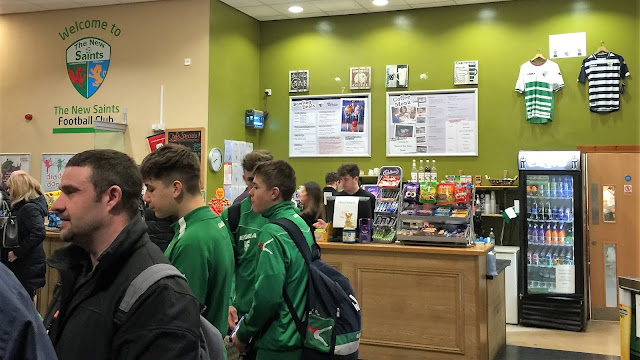 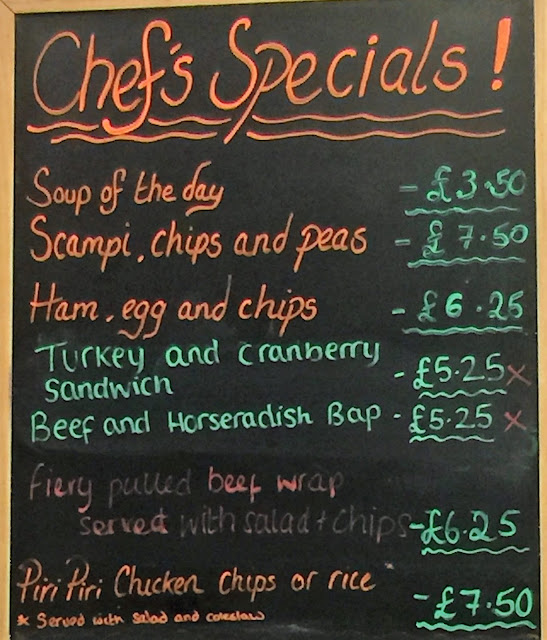 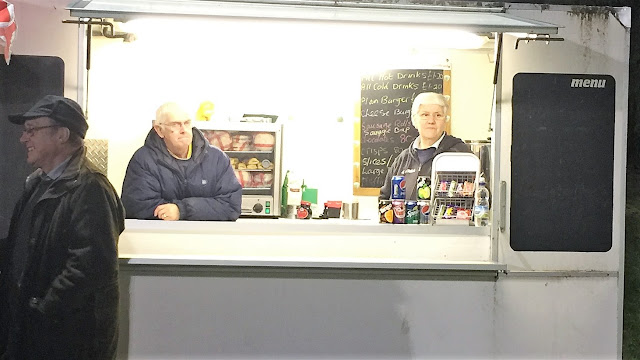 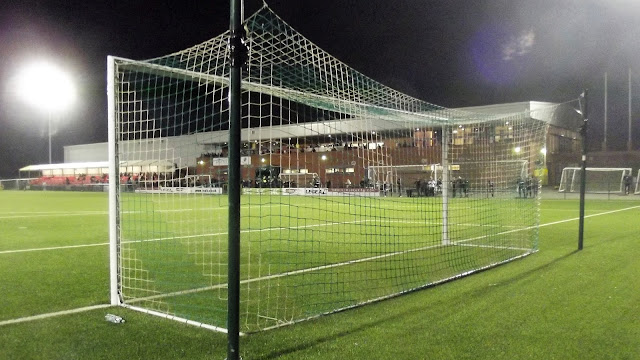 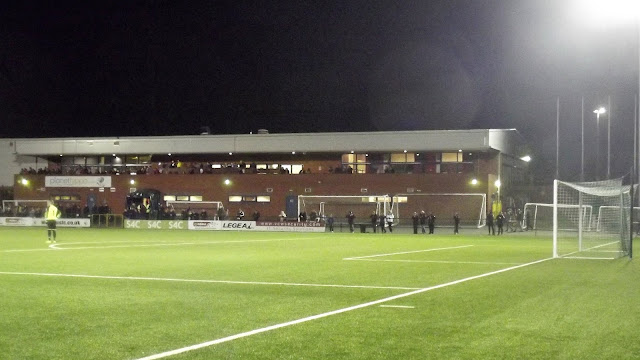 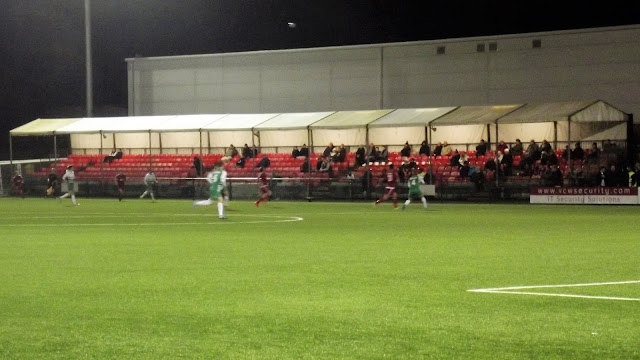 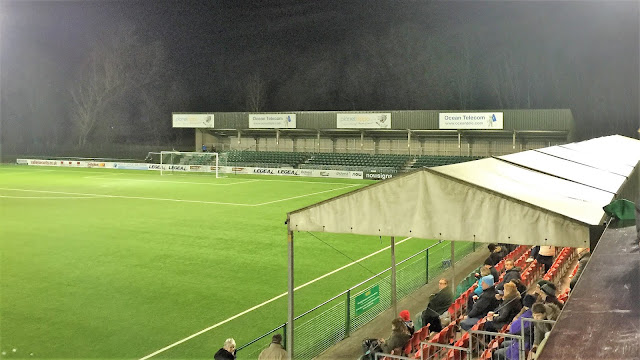 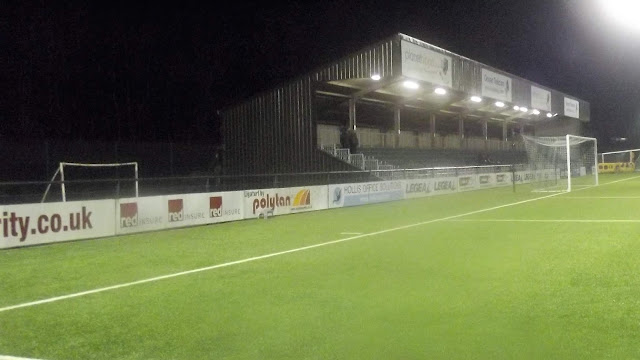 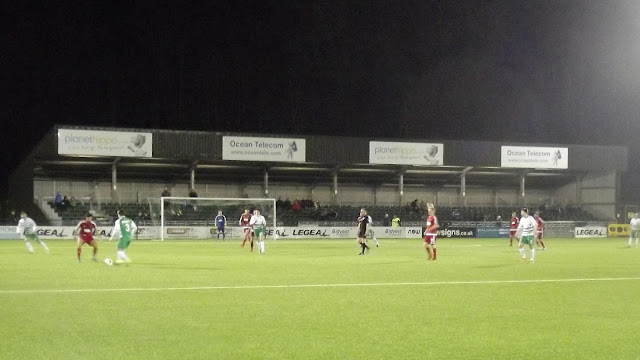 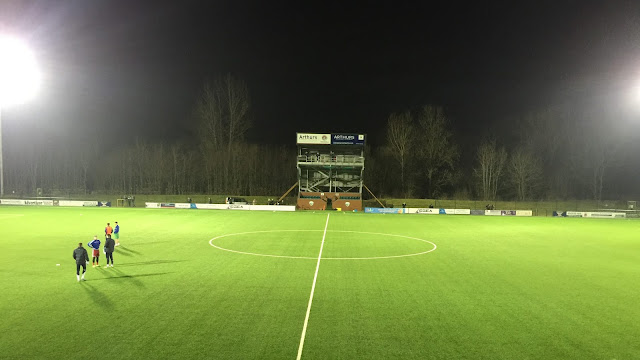 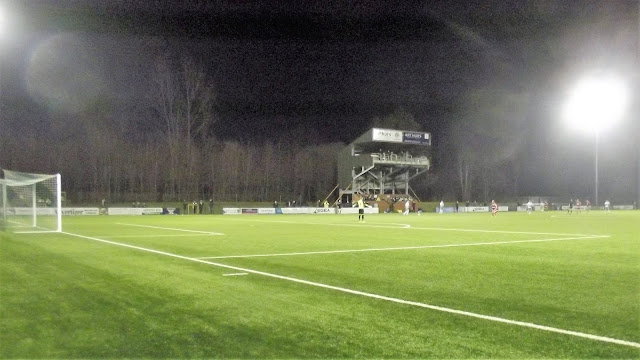 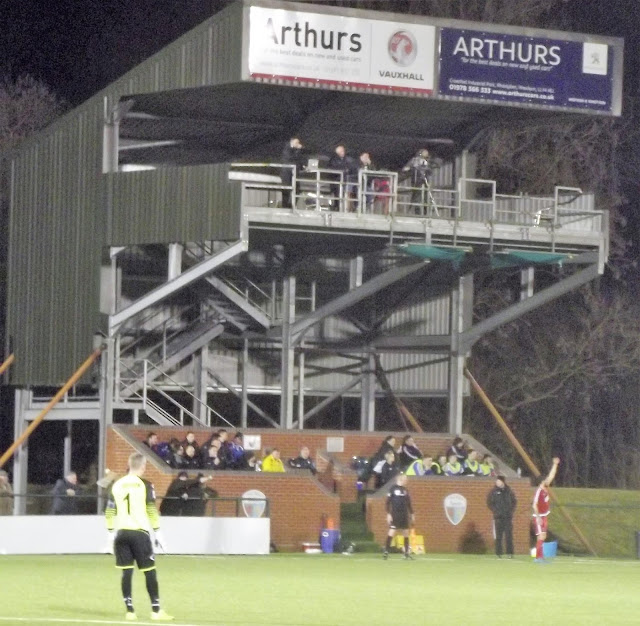 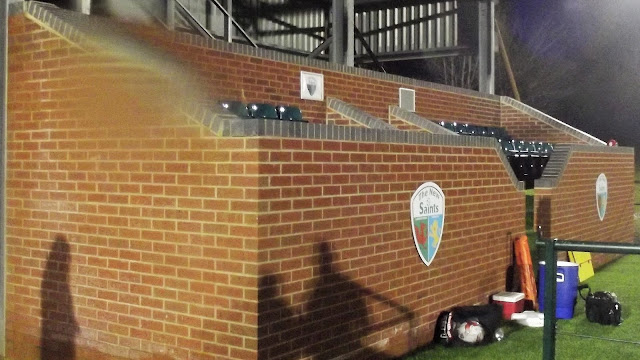 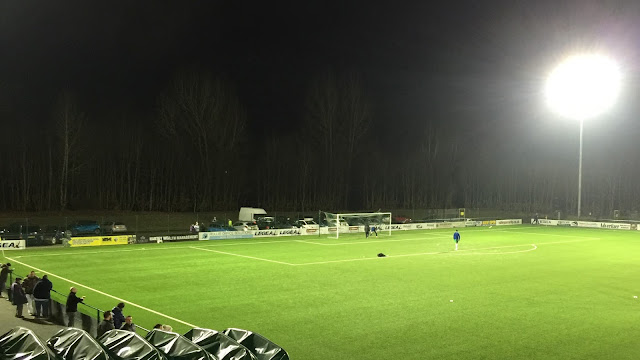 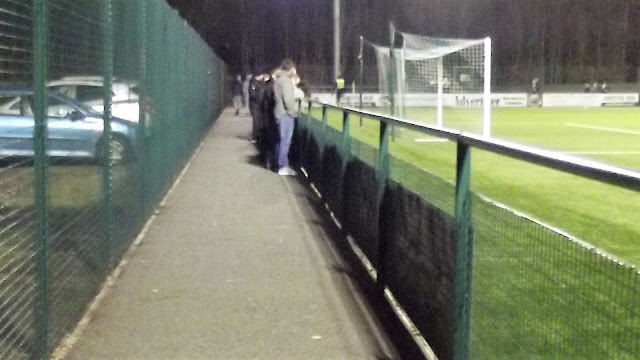