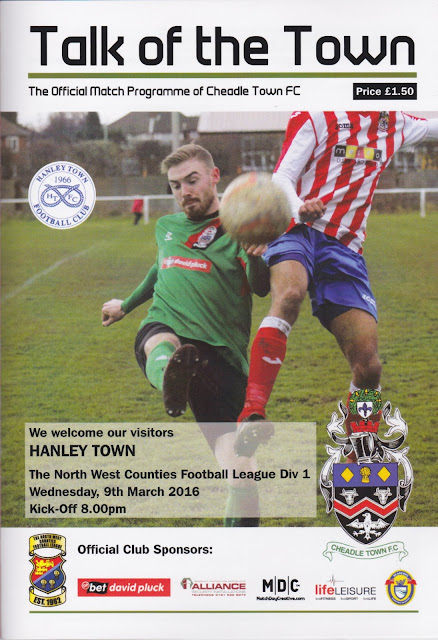 CHEADLE TOWN FC was formed in 1961 under the name GRASMERE ROVERS. Named after the street that the original founders Barrie Dean & Chris Davies lived in, they started out in the Manchester Junior League, which they would eventually win in 1968. They would go on to play in the Manchester League but big change occurred in 1983 when they changed their name to Cheadle Town and joined the North West Counties League. Starting in Division 3, which eventually merged with Division 2, they were promoted to Division 1 in 1997. They struggled with their best ever finish being 17th and by 2001 they went back down again, where they have remained ever since. Division 2 has since been rebranded as Division 1 but Cheadle have never looked like returning to the higher tier Premier Division.

That Dinamo Bucharest game is not the clubs only European match. The following year they played the Russian U19 side and lost 22-0. They remain the only English side to have played the Cuba national side - this was played in 1975 live on TV. Back home the FA Competitions have provided little cheer with the FA Cup 1st Qualifying Round and the FA Vase 3rd Round proving their limits. Locally they have won the Stockport Senior Cup and were the club who Ashley Ward played for in his younger days - he went on to have a prolific goalscoring career with Crewe Alexandra, Norwich City and Blackburn Rovers amongst others.

When selecting my evening game, I wanted something that was fairly near Warrington, where I'd be watching a youth game at in the afternoon. There were around 15 options in all, the favourite being Hucknall Town as it was a bit nearer home. Most of my backup options were in the Midlands and Nottinghamshire area, though my second choice was only discovered on Monday and was further back up towards Warrington. Cheadle Town was a team who I very nearly visited a few years back as they were scheduled to have a rather interesting friendly. In June 2014 they announced a huge friendly against Dinamo Bucharest to be played at their home on a Monday evening in late June. Sadly it never came to fruition as the day before they announced that the game was to be moved to the grounds of the hotel where Dinamo were training, due to their ground not being ready. As well as missing out on a big payday, they lost on the pitch too, with the game ending 5-0 to the Romanians. I left my afternoon game at Warrington fully expecting to go to Hucknall. Checking the weather it seemed the pitch would be in no danger and as someone has told me they are good at getting games on, I carried on down south pretty confident there would be no hitches. However, as I was getting off the M6 I saw a message from Groundhop UK boss and Central Midlands League fixtures secretary Chris Berezai that the game was off. I pulled over and was awaiting news of a pitch inspection at Holbeach but that too fell victim to the weather. I needed to get petrol anyway, so after filling up in Sainsbury's I looked again. Around 20 options had either tweeted bad news or none at all, and I thought that I'd be going home. However Cheadle Town were positive of their chances, and with little else on I headed 35 miles back up north. By strange coincidence, their opponents were Hanley Town, a team based near Stoke. 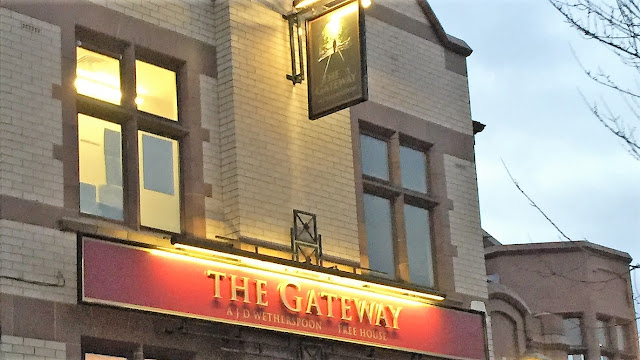 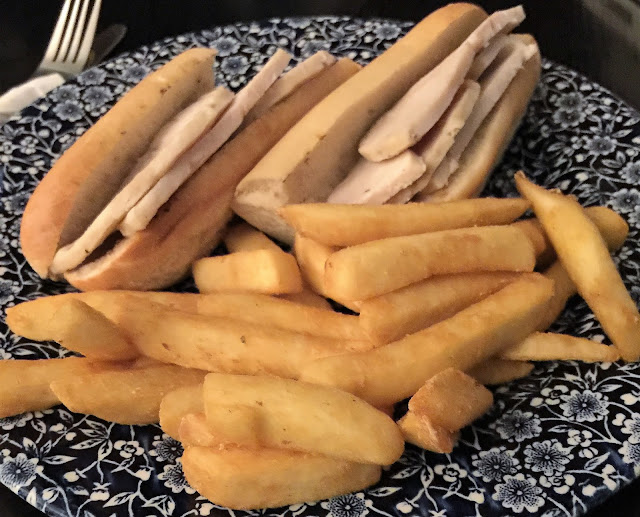 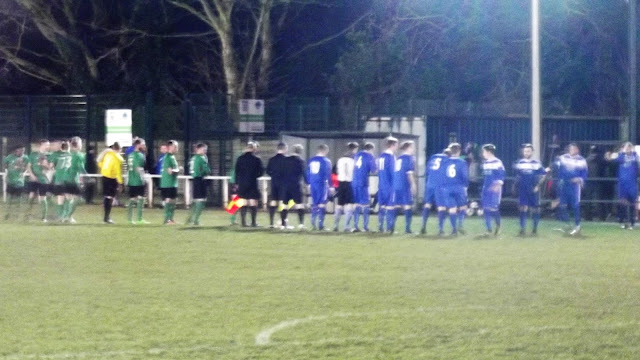 The perils of the rush hour traffic were encountered on the way back up, but overall it was nothing horrific with me parking up near the ground at 5.40. After nipping inside to check that their optimism had not been misfounded, I saw that the pitch was in tip-top condition and so I went in search of dinner. My recent love of Wetherspoons was again heavily influencing my decision and so I took the 1.5-mile walk to Didsbury. There 'The Gateway' was a fine example of the chain and I had Turkey Baguette, chips and a couple of pints of top-notch cider for under £8. All were excellent and one cider was even a new try in Sandford Orchards Devon Scrumpy. By the time I'd finished it was 7.10 and so I started walking back to the ground in preparation for the 8pm kickoff. I got back to the ground at 7.40, paying £5 entry plus £1.50 for a programme. I had a wander around the ground while I was waiting for the game to start. Visitors Hanley Town were league leaders while Cheadle Town were just outside the playoffs. It was pretty close and on 22 minutes Thabiso Magida followed up from close range to give his team the lead. Straight away Hanley came back on the break but the home keeper denied them. Not for long though as the corner was expertly floated in, leaving top scorer Theo Stair with an easy chance to restore parity. From then on the visitors were well on top but it took until 70 minutes for Matt German to scramble in the goal to put them ahead. That was the way it stayed, and you could kind of see why Hanley Town have done so well the season as they kept Cheadle’s chances to a minimum and closed the game out. After the game, I made my way to the local Morrisons to get some cans of drink for the way home. I set up my Sat Nav for the way home, with my expected time of arrival being 1am. On the way home I listened to TalkSPORT with them talking about Chelsea's defeat to PSG in the Champions League. As for my other options on the night, I must have had around 15 but it was only my chosen game at Cheadle that survived. I got home as predicted, watching some TV before going to sleep an hour after getting in. 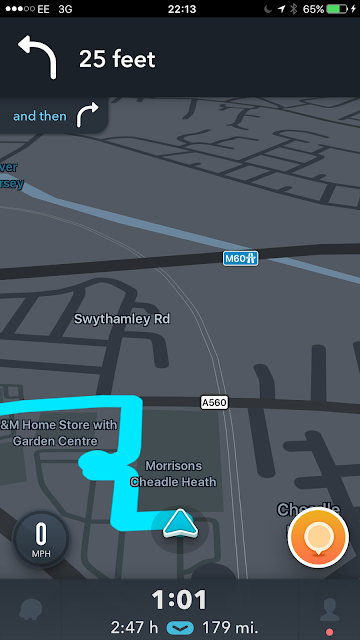 PARK ROAD is a fairly basic ground, but a decent one for step 6. There is just the one stand, but it's a decent one, elevated above pitch level. There are around 150 seats, plus around 200 standing spaces behind it. The rest of the ground is open hard standing. The rest of the facilities are pretty basic, just pies for food and a few cans for booze. The programme is excellent, however, glossy, well presented and a fair bit to read. There is the town of Cheadle not far away and that has a number of places for eating and drinking. I chose to walk the 1.5 miles to Didsbury where there is a decent Wetherspoons with the usual good value food & drink. 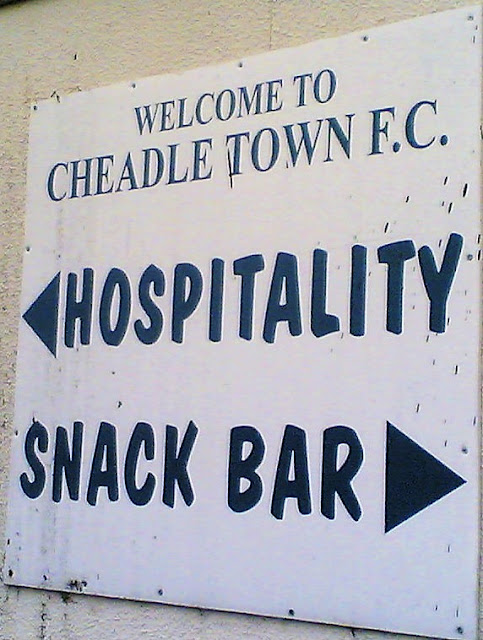 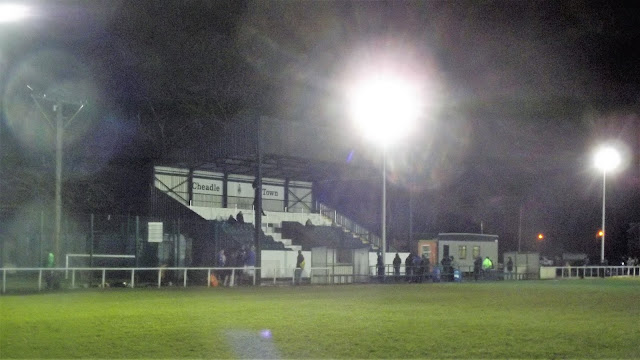 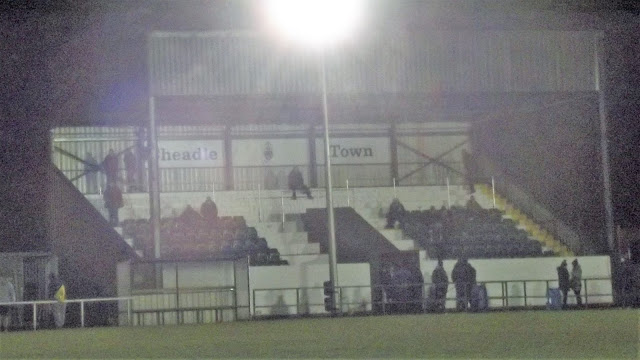 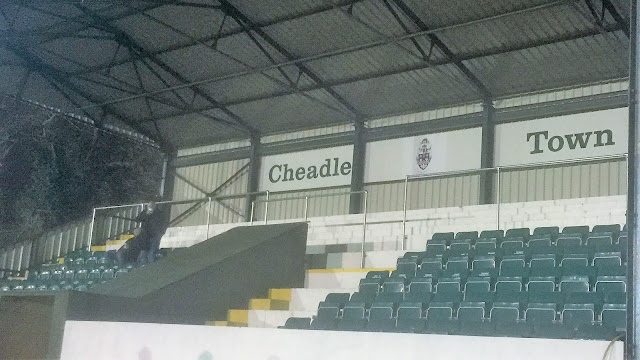 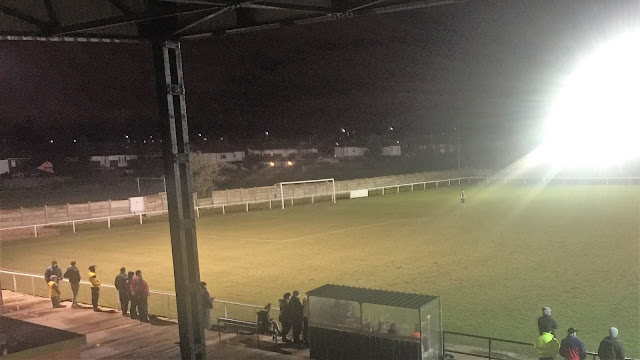 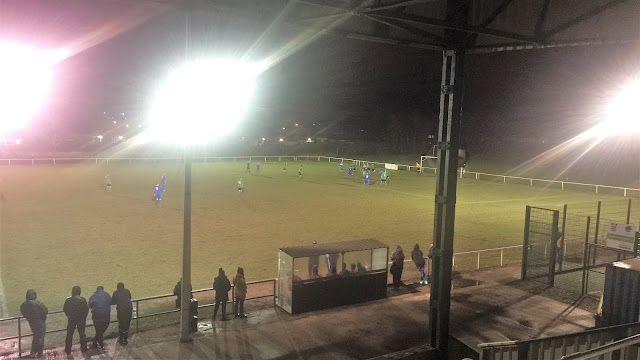 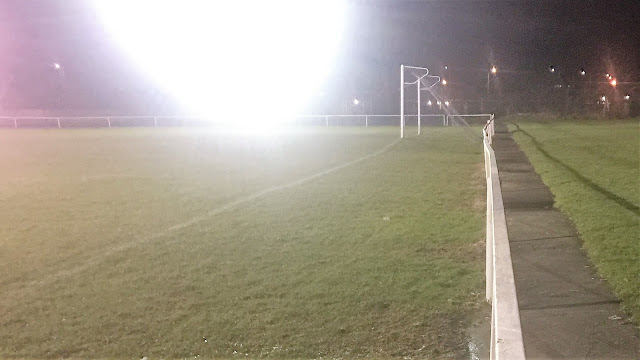 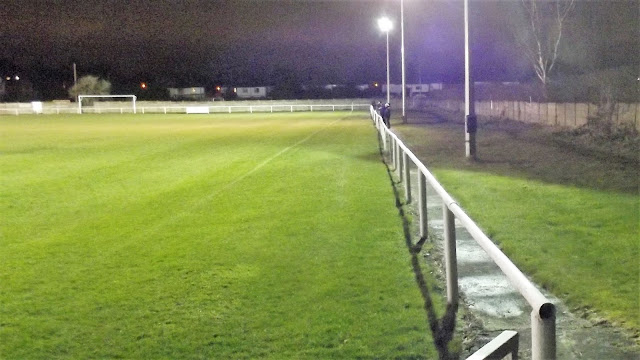