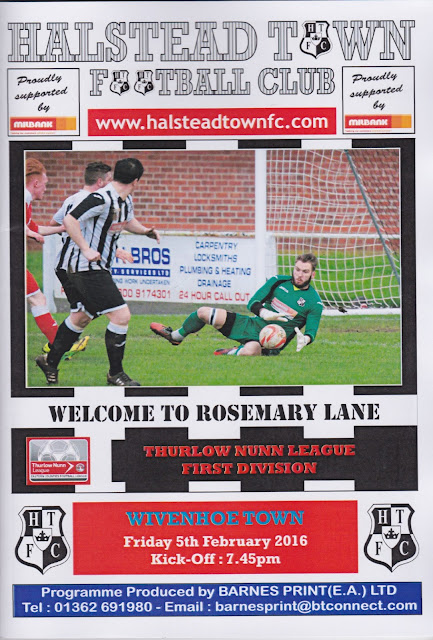 HALSTEAD TOWN FC was formed in 1879. Playing friendlies at first, before switching to local leagues, they joined the Essex Senior League in 1980. They had 8 seasons here, with their best finish being 3rd, which they achieved on 2 occasions. For the 1988-89 seas,on they joined the Eastern Counties League Division 1, finishing 2nd in their first season and winning promotion to the league's Premier Division. Since then they have spent around about the same time at each level with them being Champions of the Premier Division in 1995 and 1996. 2002 saw their most disappointing finish, 13th in Eastern Counties D1, a level which they have been at since 2007. Prior to kick off they were enjoying their best season in a while sitting 5th, whilst visitors Wivenhoe Town were sitting pretty at the top of the league.

The club's best ever run in the FA Cup came in 1998.. They beat Flackwell Heath 3-0 in the Preliminary Round. A trip to Bowers & Pitsea saw them run out 3-1 winners in the 1st Qualifying Round. It was another trip in the following round as they defeated Fisher Athletic 2-1. It was ex Conference side Slough Town that were their opponents in the 3rd Qualifying Round and that was where the run ended with a 3-1 defeat. Halstead Town have reached the FA Vase 4th Round twice - on the first occasion they lost 5-1 to Wimborne despite a notable 5-0 victory over Histon earlier on. Various local cups have been won including the Essex Senior Trophy on 2 occasions whilst the most famous person to come from Halstead is Radio 2 DJ Steve Lamacq who supports Football League side Colchester United. 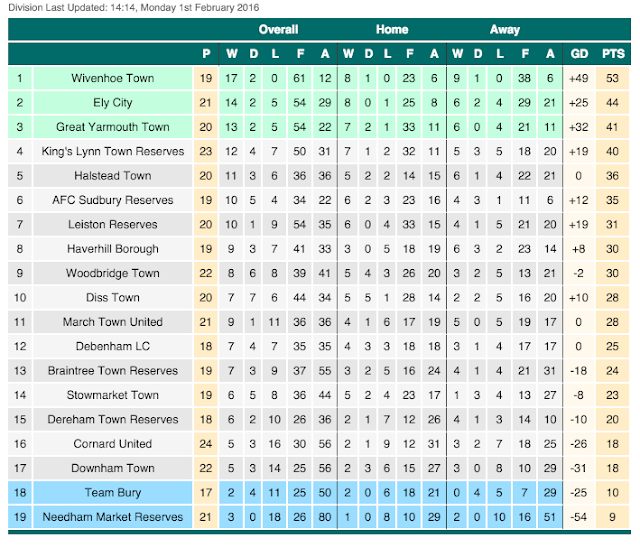 I'd originally been intending to visit Halstead Town at the beginning of November 2015. They were playing a charity game against the Colchester United 91/92 Conference winning team. This held special interest for me - they beat my own team Wycombe Wanderers to the title on goal difference on a season that had many twists and turns. It was my first season watching Wycombe and looking back bought a lot of memories. Added to that I'd be meeting mates from Braintree and Colchester who would be in attendance, meant that I had it planned well in advance. It would rely on me getting out of work a tad early, not usually a problem as Sundays were really quiet at that point. Sadly I'd not factored in a mass 'sickness epidemic' by the lazy sods that I work with, almost certainly caused by an excess of alcohol on Saturday night before. In any case, it meant I was imprisoned at work, and I'm not ashamed to say that I still bear a grudge to those responsible to this day. Happily, the Eastern Counties League are fairly big on Friday night football and so when a batch of said games was released, Halstead Town was the first one on the agenda. After a really busy start of the week at work, I was glad when it settled down towards the end of the week. On Friday I was out of work by 12 and after going home and having lunch I spent a couple of hours at home before leaving at 2.15. The reason for the early departure was that I wanted to go to Taco Bell for dinner. The Mexican fast food joint had only a handful of branches in the UK and one was almost en route to Halstead in Chelmsford. There was also an excellent cider specialist cider shop in the town,  as I’d not got anything decent at home I thought I’d stock up. 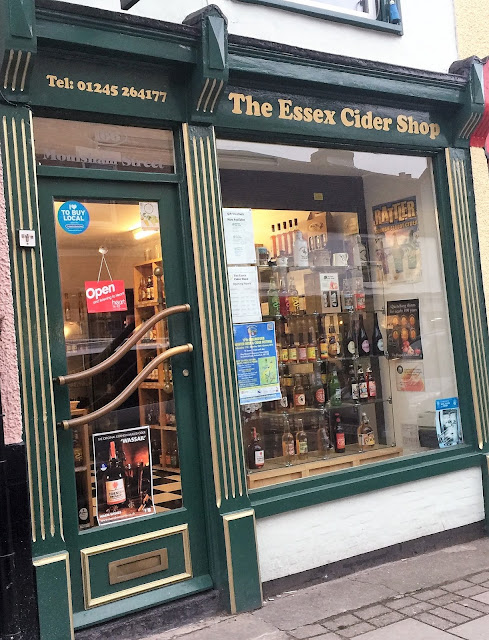 I left at 2.15, getting to Chelmsford an hour later. On the way I was flashed by a speed camera on the M25 but I know I was only going a fraction above the speed limit, certainly below the threshold for prosecution so they will have a battle on their hands if anything comes through the post. Chelmsford was a great town, especially the cider shop which must have had around 150 different ciders, all at reasonable prices. I got 14 bottles for £34 and it was all real stuff, none of your industrial rubbish. I'd parked at Tesco so I fulfilled my obligation of spending £3 in store and took my stuff up to the car. I then went to Taco Bell for dinner, having a volcano burrito and spicy fries with an orange juice for under a fiver. By then it was time to go and meet Daniel and Maurice from Braintree. It was only a short journey so they got my programme in return for petrol, every little helps. We got to the ground at 6.30 and I realised that I didn't have any cash so I had to pop to a local shop to get some out. After paying £6 to get in I went to the bar for a pint of Aspalls which was very nice and cost £3.50. It was turning into a hoppers convention with friends Leicester Alan, Laurence, Simeon and Chris turning up and Essex Footie twitter guy Dan was also in attendance. The club seemed a bit overwhelmed by the influx of hoppers with programmes sold out well before kick off and tea bar service very slow. It was a shame as the chips and programme were both excellent for the asking price of £1. 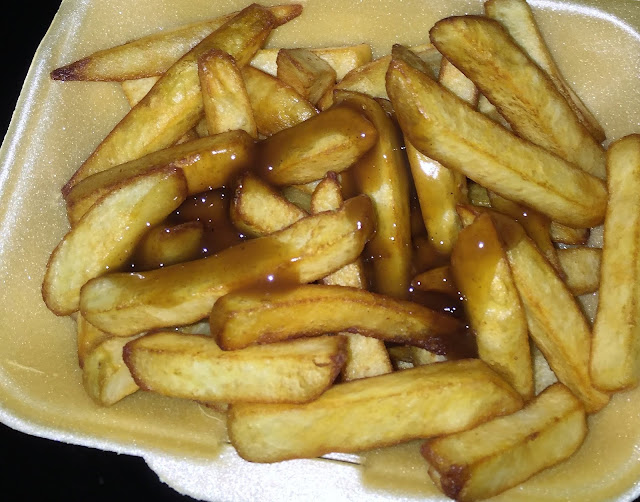 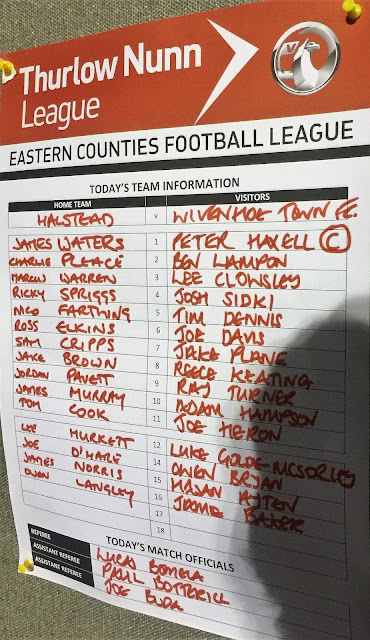 Wivenhoe opened the scoring after 3 minutes with a header at the far post from Reece Keating after a decent delivery from a corner kick. 18 minutes in and it was 2-0, another header, this time from an excellent cross which was scored by the visitors top marksman Ray Turner. Halstead pulled one back on 28 minutes when the visiting keeper's goal kick deflected in off Halstead's winger Tom Cook as he was trying to clear the ball. The score stayed the same at the break but after half time the hosts played like a team possessed and after a series of goal-line clearances Jordan Pavett finally bundled the ball over the line with 55 minutes on the clock for an equaliser. Halstead were the better team at this point but on the break, Wivenhoe regained the lead with a drilled low shot into the bottom left-hand corner from Adam Hampson. This prompted wild celebrations and much confusion for the referee. He handed a second yellow to the Wivenhoe number 7, and therefore a sending off. Only he got confused and he had in fact booked the home and not the visiting player. This was quickly remedied by the official. There were further chances for both sides, but Halstead couldn't get what would have been a deserved equaliser for their hard work. It was another win for a very good Wivenhoe side who extend their lead at the top of the league, which prompted joyous scenes at the final whistle. A few people filmed the goals and I have compiled a highlights package which is viewable below.

The official attendance was announced as 202, though it seemed like there were a few more than that. After the game, I spent a while saying goodbye to the various people I had met. I dropped my two Braintree compatriots back at their respective homes and made my way back home. As with the journey up, I was kept company by The Two Mikes - a podcast of the TalkSPORT overnight show. In my opinion, there is no better show on the radio, even if Mike Parry is a bit around the twist. There was a road closure on the way home but for once my Sat Nav was up to speed and I came off the official diversion, driving past Bishops Stortford, Broxbourne Borough and Cheshunt FC before rejoining the M25. I got home at 11.45, having a couple of ciders and chatting online and watching TV before going to bed at 2.30am. 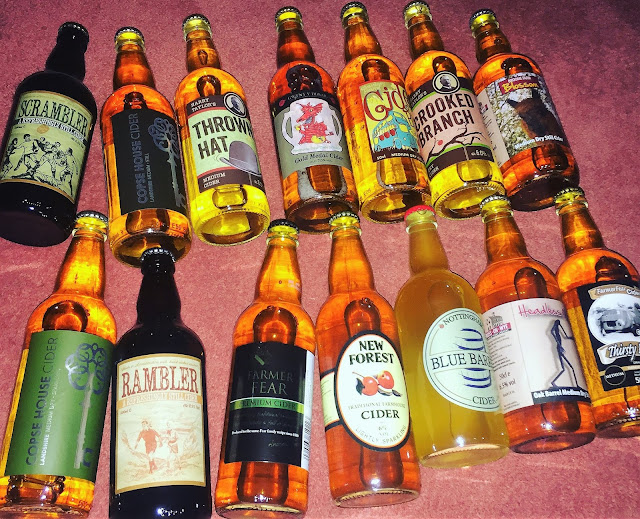 ROSEMARY LANE is a traditional non league ground, the sort of which are being replaced by flat pack constructions at a rapid rate. The focal point and only covered accommodation for fans is the main stand. This holds around 300 fans and despite the supporting posts offers excellent views owing to the steep steps, The rest of the ground is open hard standing. The bar and tea bar are very good for this level and there is also a small range of merchandise available. The town is also nearby with plenty of choices for drinking and eating. 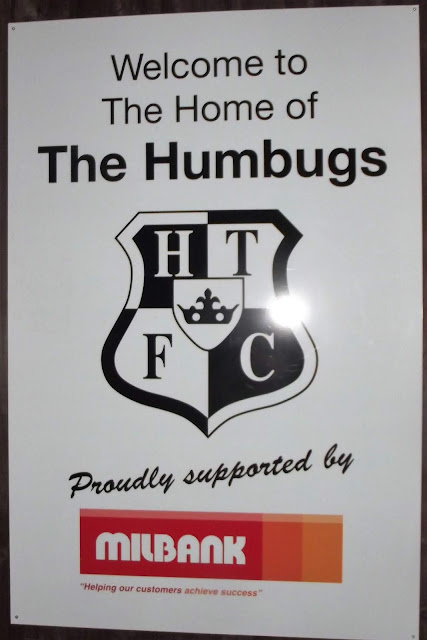 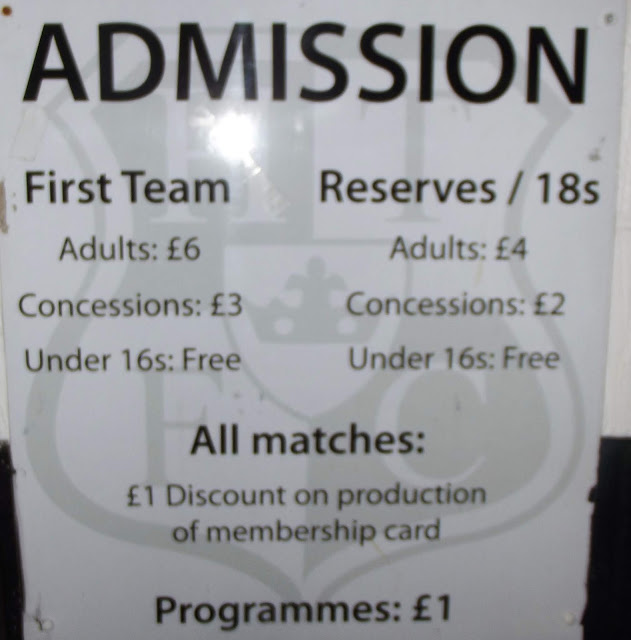 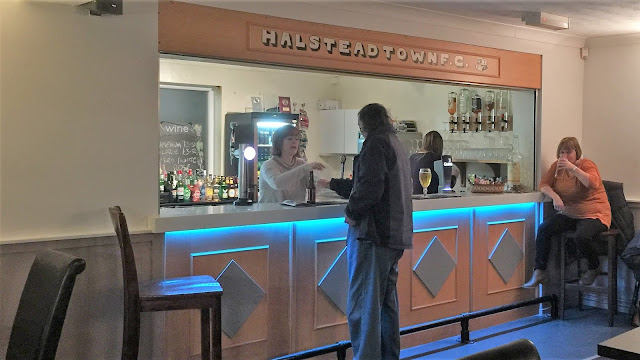 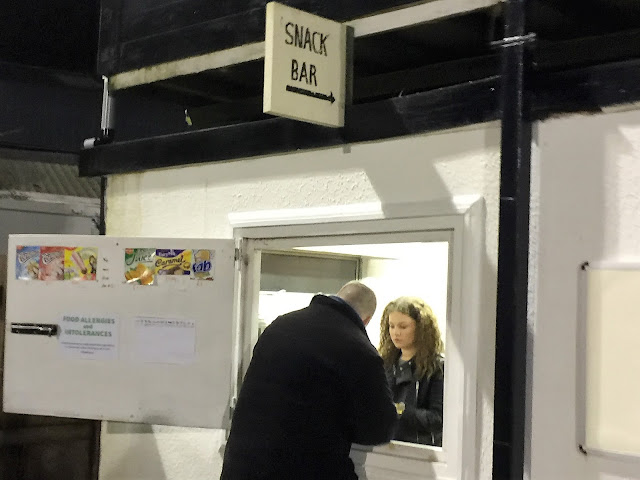 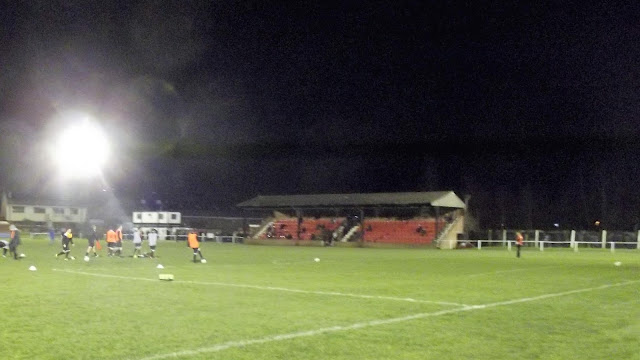 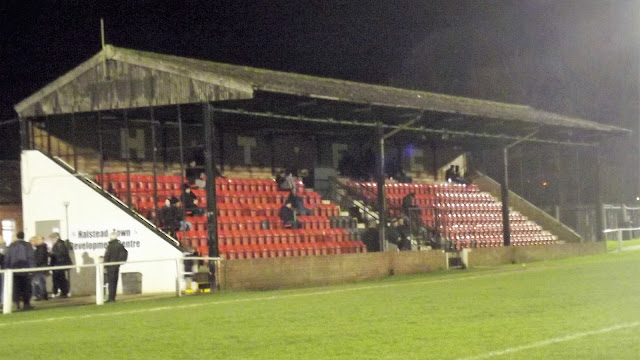 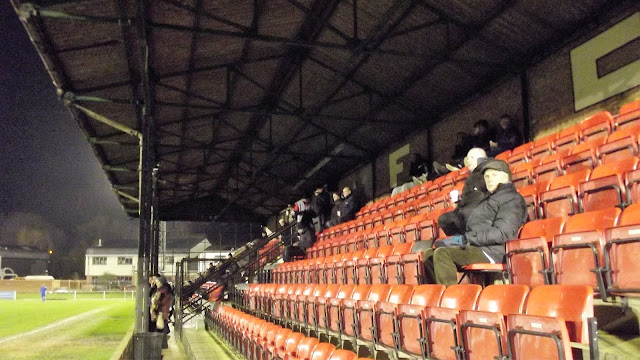 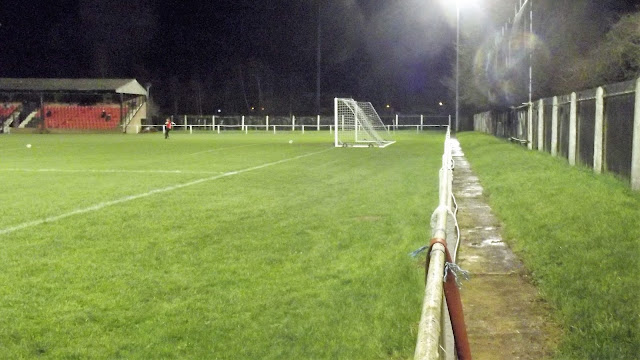 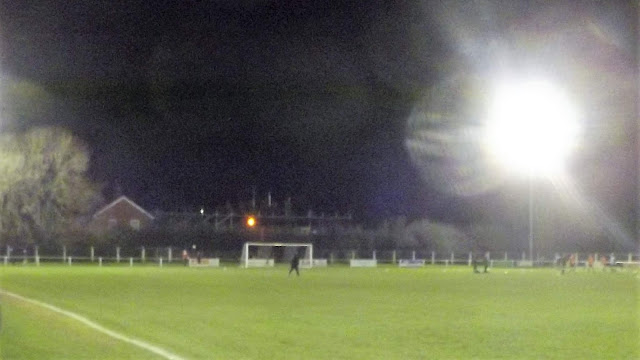 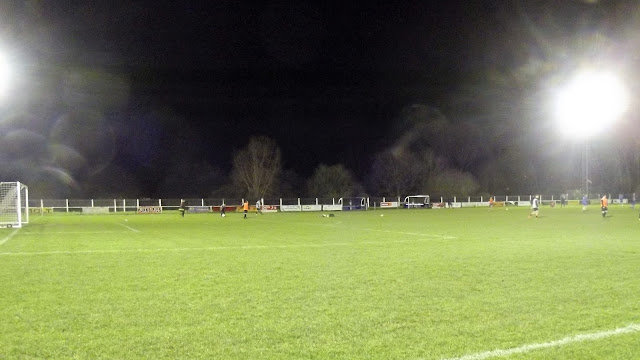 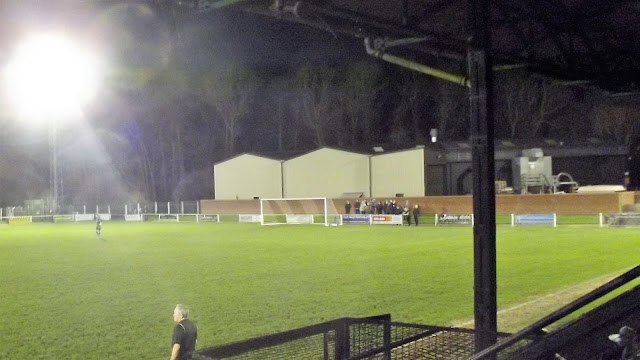