FARNHAM TOWN FC was formed in 1912. They have played in various local leagues in and around the current step 5 level for most of their history. In 1980 they joined the Combined Counties League and barring one season, have remained there ever since. After being champions 2 seasons in a row, the intention was to spend 1992/93 in the Isthmian Division 3, but they resigned before the season had even kicked off. They didn't have things all their own way when the returned to the Combined Counties Premier the following season and in 2006 they were relegated to Division 1. Despite winning the league in their first season, ground grading issues prevented them from claiming their promotion. They'd have to wait until 2011 when a runners-up spot behind Worcester Park was enough to earn promotion back to the Premier. Since returning, things have been steady, and this has continued this season with them sitting in 12th place at the start of the game.

Their best run in the FA Cup came in 1999 when they reached the 2nd Qualifying Round before losing in a second replay to Herne Bay after the original game was declared void. They've not had a huge amount of success recently in the FA Vase but in 1977 they reached the 4th Round before a heavy defeat to Farnborough. The last cup they lifted came in 1996 when they lifted the Combined Counties Challenge Cup. The town's most famous resident was rugby player Johnny Wilkinson who grew up there and Woking FC hero Geoff Chapple lived in Farnham and was chairman of the club at one point. I'd be without my fellow hopper Anwar again for this hop - he was on Arsenal watching duties as they were playing Southampton in the Premiership. Whilst that meant that I'd not be getting help with fuel costs, it did mean that I could have completely free reign as to where to go. There were around 40 options open to me for a new ground, though I straight away whittled these down to 14 in the week before. On the Sunday before the game, after double checking with the non-league paper, I'd narrowed it down to 2. The fact that Farnham Town v Chertsey was a cup game, as well as the fact I'd complete the Combined Counties meant that it beat Barking v FC Romania. I'd actually tried to go to Farnham a couple of times before, but waterlogged pitches meant that I'd had to change plans at the last minute. Thankfully the weather looked fine in the days leading up to the game, with no rain forecast. 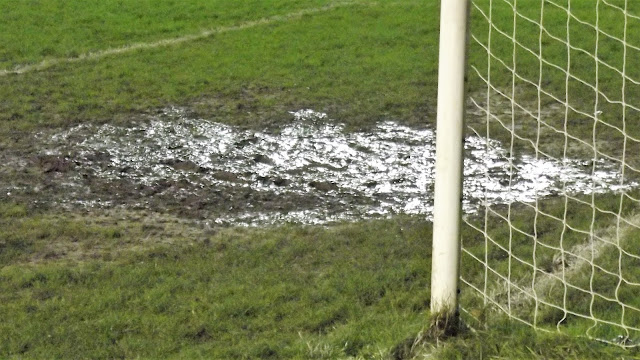 The Monday at work was hellish as Mondays are and after giving them 2 hours overtime I was fed up and had had enough. The greed of accepting too many orders when we haven’t got enough staff is selfish and that was with plenty coming in on their day off and staying on. I was glad to have my Tuesday night off and after a decent nights sleep, I walked down town for a bit of exercise. After coming back I spent the afternoon relaxing, even placing a few bets online for the first time in ages. Research continued apace for my Frankfurt trip early next month with plenty of websites coming in useful, and forums gleaned for information that I was unsure about. After a dinner of Chilli Stir Fry, I left just before 5.30. The journey down was slow with small delays on the M40 and M3 but surprisingly hassle-free on the M25. I arrived at 6.40 and after popping into the clubhouse to find there wouldn't be a programme for tonight I went and had a look on the high street to see if there were any decent cider pubs. There weren't so it would be another sober Tuesday for me. To pass time I chatted to the barman Nobby who had plenty of stories of how he used to be a quite a player back in the day and also told me how the club has suffered after a change of council led to the club's rent on the ground going from £5 a year to £4000 and then they had expensive pitch costs on top of that -  with it being flooded often due to a dodgy grate  that kept clogging up. That would probably explain why previous attempts to visit had been thwarted, luckily there were no issues tonight. Around 5 minutes before kick off I went and got some pictures of the ground. One goalmouth was not in great condition but thankfully the referee was not one of those who calls off games at the drop of a hat. 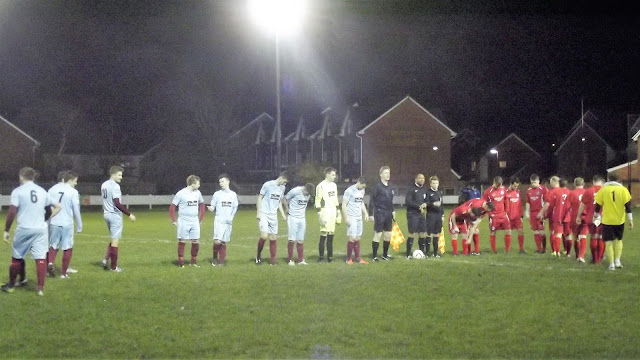 It was pretty even early on but 17 minutes in Farnham opened the scoring. It was a free kick someway out but confusion in the box led to an own goal much to the annoyance of the visiting keeper. I got the moment on video more by luck than judgment. 3 minutes later it was all square - the home keeper saved the initial shot but Wadmore pounced to level for Chertsey. The visiting manager was getting aggrieved that his side were not getting any decisions but the referee was taking no nonsense, being very strict about staying in the technical area and telling the gaffer that he'd be sent off if he kept complaining. A tad harsh seeing as he had kept his language civil and had a valid point. It was a change to what I was used to seeing - the referee being subjected to a string of expletives and not even saying anything. The hosts could have gone ahead on 35 minutes but were on the wrong side of a very tight offside decision. The second half was a bit quieter but Farnham regained the lead on 76 minutes with a close-range finish by Mark Corbett. They made it 3-1 with a Jack Dillon header around 5 minutes from time to seal the game. The penalty shoot-out I'd been hoping for did not materialise but at least it had been an entertaining game. After the game, I made my way home. When I'd set the Sat Nav for home before the game it estimated an hours delay. Luckily it was back to normal by the time it came for me to leave at 9.40. The journey home was not without incident though - work on the M3 meant a diversion down the A30 and a 20-minute delay. I got home just before 11, watching Match of the Day before going to sleep with work at 4am. Next up for me will be Halstead Town v Wivenhoe Town on Friday, as long as the weather does not ruin my plans.


THE MEMORIAL GROUND is a wonderful old ground with plenty of quirks. Barely a straight edge in sight and a nice change from all the modern grounds. There are 2 covered areas - a seated stand behind the goal which owing to the natural way the ground is, is elevated above pitch level. This holds around 150 whilst there is a smaller covered standing area with benches at the back, holding around 50. The rest of the ground is open, with one goal being out of bounds due to space constraints. The bar and tea bar looked pretty standard for this level - as I'd already had dinner I didn't indulge. 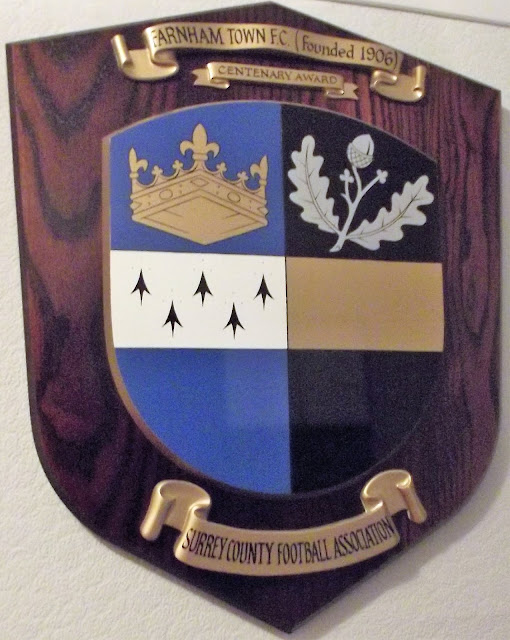 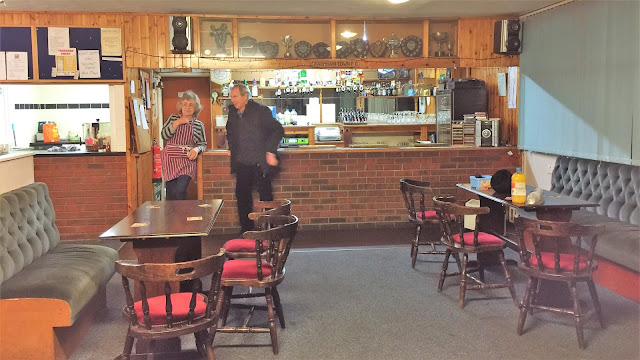 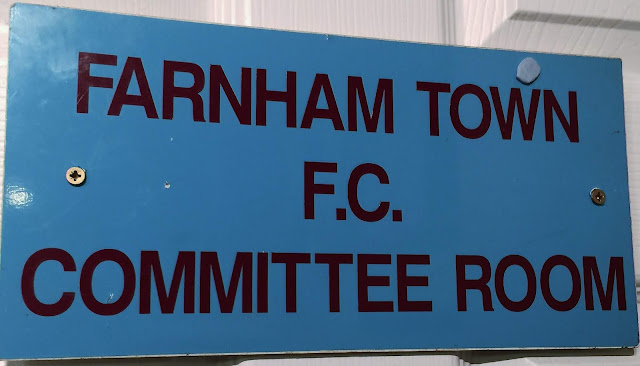 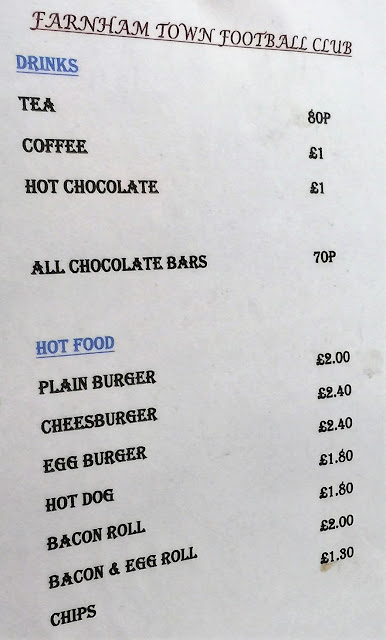 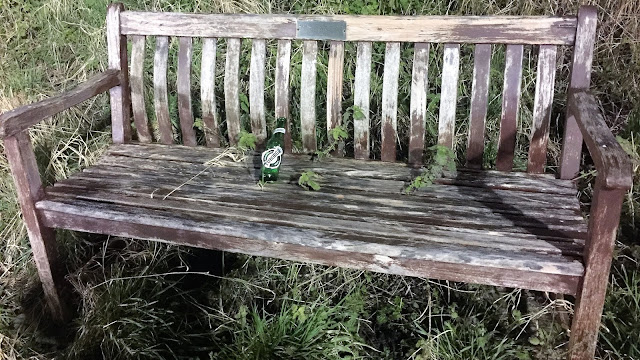 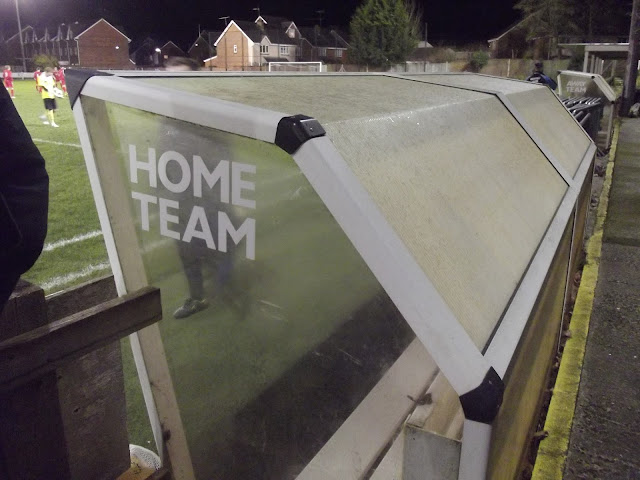 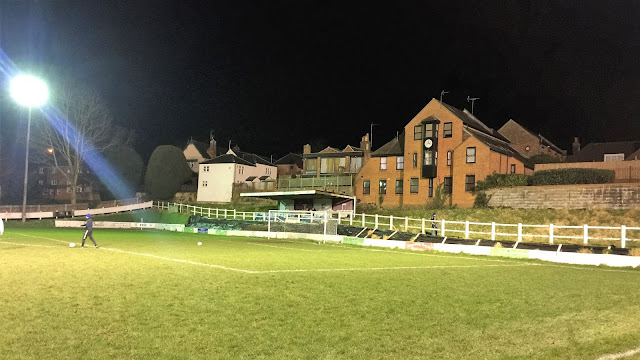 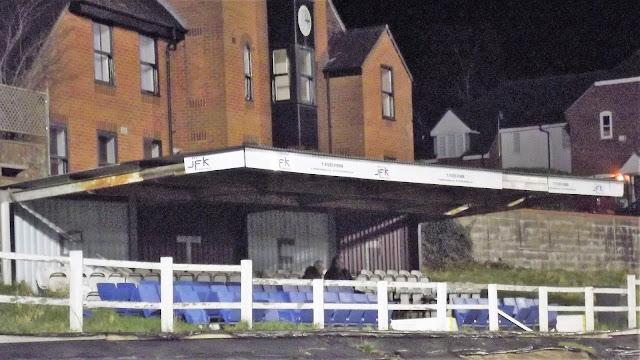 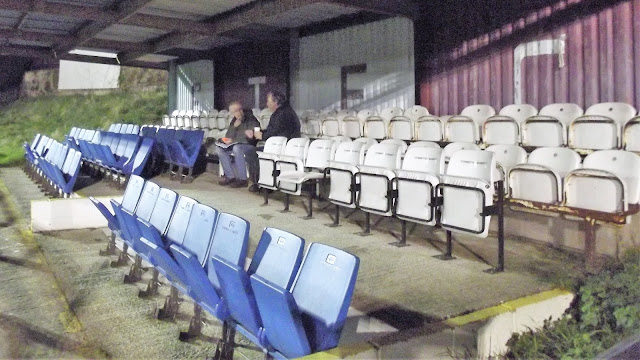 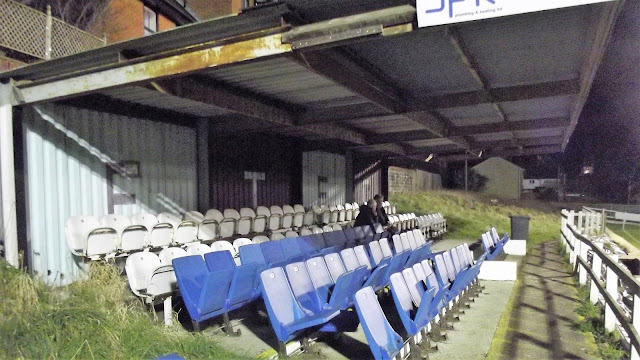 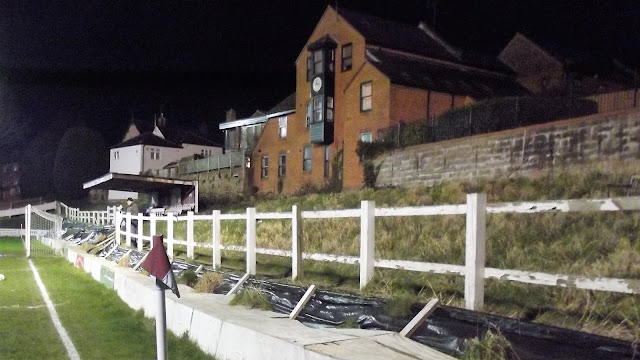 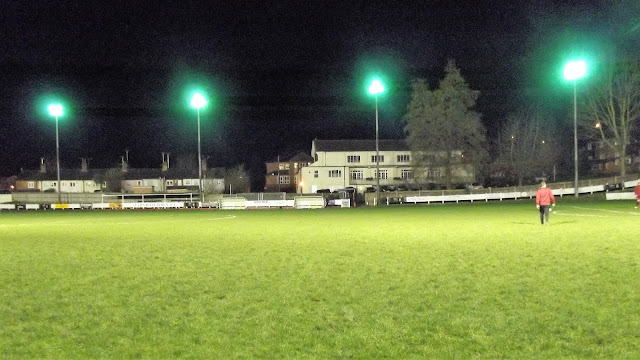 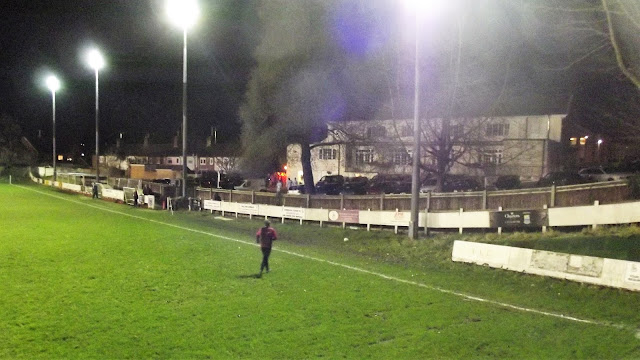 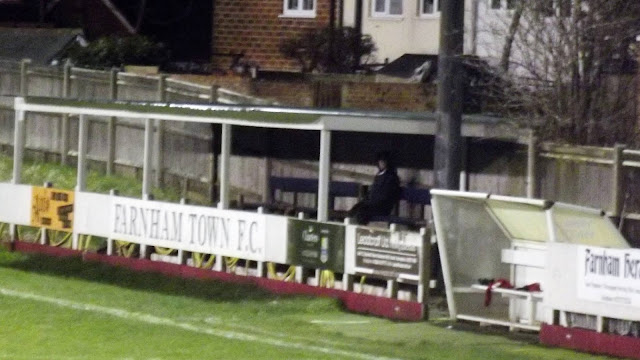 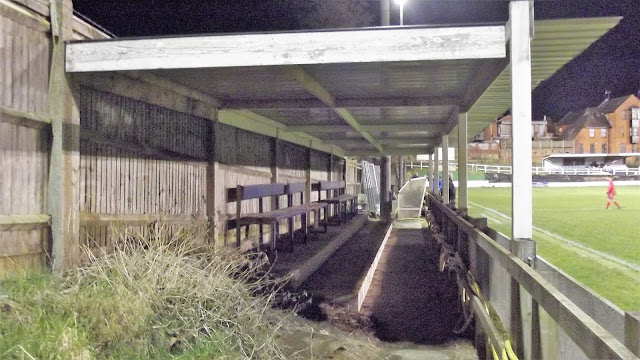 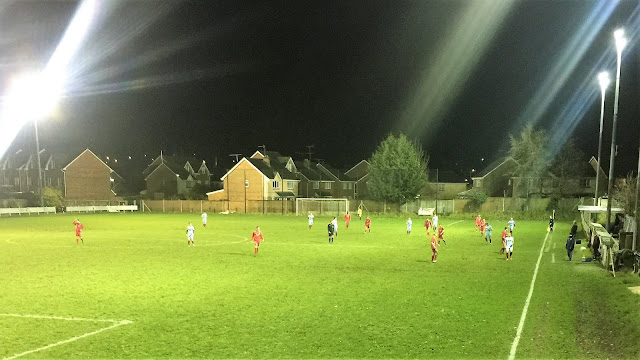 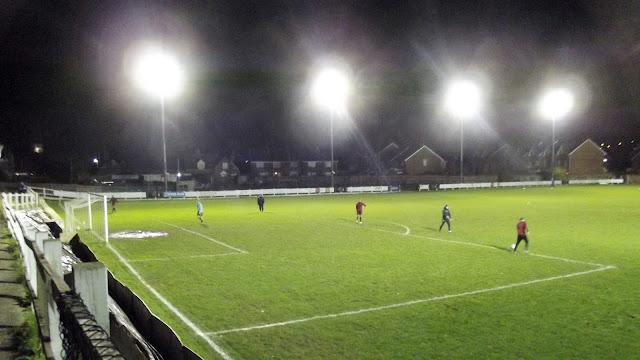 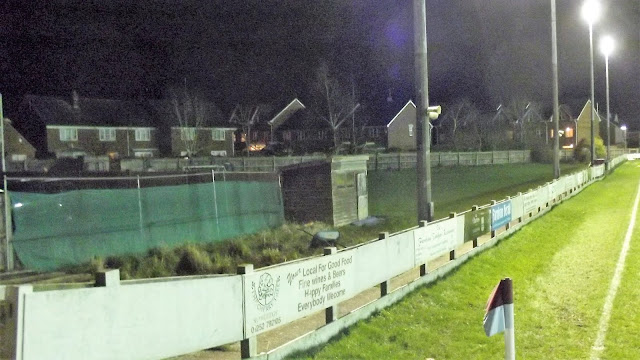