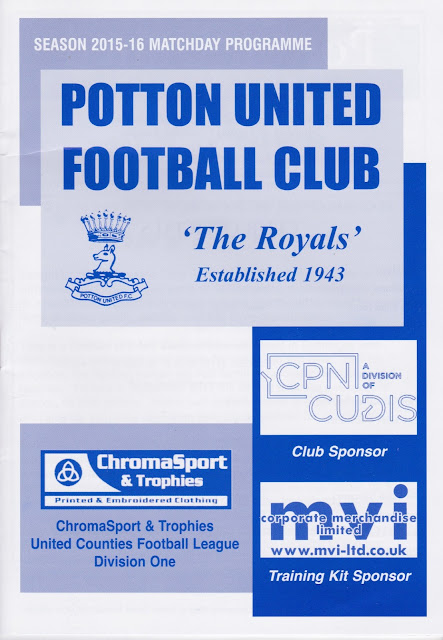 POTTON UNITED FC was founded in 1943 and were an immediate success, winning the Bedfordshire Intermediate Cup a year later. Though they spent their early years in the South Midlands League, they switched to the United Counties League in 1961. They spent up until 2001 in its top division, even winning the Championship on 2 occasions during the 1980s. In 2004 they win promotion back to the Premier Division and were runners up to Cohenhoe United and Woodford United in each of their next 2 seasons. However, they were relegated again in 2009 and have remained in Division 1 ever since. After a series of bottom half finishes, they had their best season in a long time last time out, finishing 3rd and just missing out on promotion.

The club reached the FA Cup 3rd Qualifying Round in 1974-75. After beating Biggleswade & District and Irthlingborough Diamonds they went out to Bedford Town.  The best of their runs in the FA Trophy had come a couple of seasons earlier, the Third Qualifying Round again proving their limit as they exited to Bexley United. The FA Vase saw a much longer run in 1989-90. After beating Cheshunt, Norwich United, Stevenage Borough and Hastings United they faced Billericay Town in the 5th Round. However, their dream ended in Essex just as they had Wembley in their sights as the home side triumphed 2-1. As well as the aforementioned Bedfordshire Intermediate Cup, Potton United have also won the UCL Knockout Cup on 2 occasions. 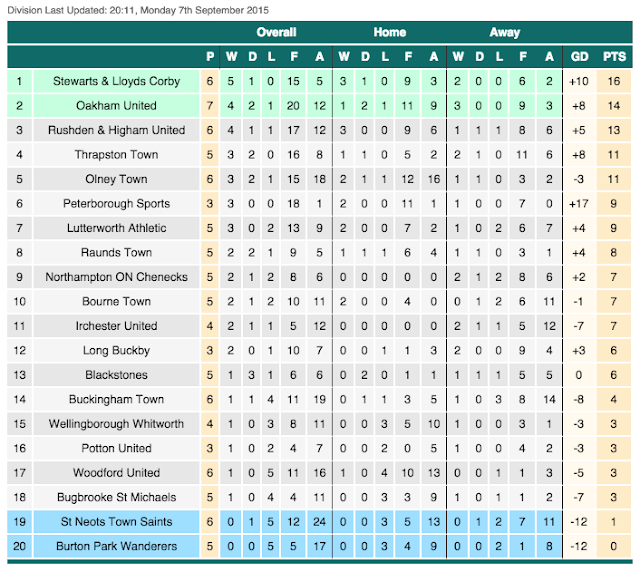 A local groundhop was needed for this Tuesday, as fellow hopper Anwar couldn't leave until late as he had to look after his kids. So looking through the fixtures at half time during Wycombe's 2-1 win at home to Hartlepool United, I picked out the nearest one at Potton United. Anwar was agreeable to the leaving time, and so after double checking on Sunday that it hadn't been moved due to an FA Vase replay, we confirmed our destination for the following Tuesday. Looking on the website, even though it was one of those dreadful 'club website' ones I was pleased to see entry was only £4, with programmes being £1. With me staying up north next week on my week off, it was going to be an expensive one. So I was glad to have a good value and low-cost night out. It was my usual Tuesday off on the day of the game. Annoyingly there was a power cut at home but I wasn’t really bothered as I took my weekly 4-mile walk into town before going back home in the car with my Dad. I didn’t buy much, only getting some cans of Irn Bru but I enjoyed the exercise nonetheless. I spent the afternoon at home and was so lost for what to do I fired up an old Football Manager game that I had not played for about 6 months. I played 7 games, winning 4 and drawing 3 and my unbeaten run stood me in good stead for promotion. I was enjoying it and was disappointed to have to pack up when it came to time to leave. After a dinner of Chilli Con Carne and Rice, I left at 5.15. I got to Anwar in Aylesbury 35 minutes later and we were soon on our way. There was plenty of traffic coming out of Aylesbury but once we had done a few miles we started to see clearer roads. We got to Potton at 7.15, paying £4 entry and £1 for a fairly decent programme. We got some pictures of the ground and I caught up on Facebook while I waited for the game to start. The England game was on in the clubhouse although with us already qualified it was a bit of a dead rubber. Looking at the League Table before the game, it was somewhat of a surprise to see who the leaders were. S&L Corby had gained just a single point last season and finished rock bottom with a goal difference of -139 having conceded 161 goals. But they were flying this time out, having won 5 and drawn 1 of their 6 games so far. 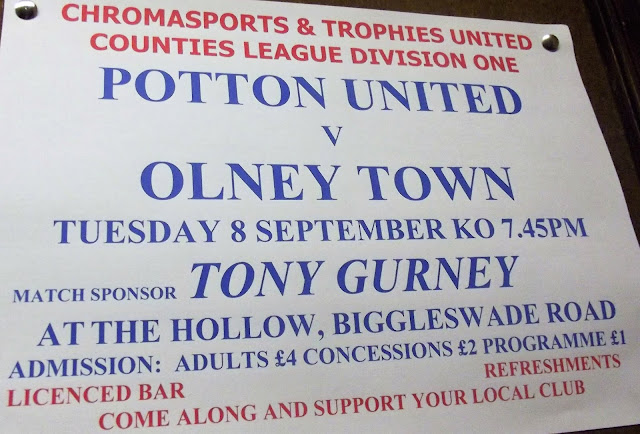 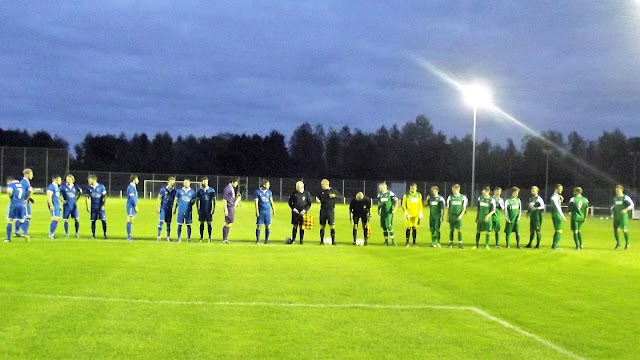 True to form Olney made all the early running. They were ahead after 13 minutes when they opened the scoring with a low driven shot into the bottom right-hand corner. On 25 minutes Potton had their first chance of the game and boy did they make it count. It was a free kick just outside the area and Joe Jordan (no, not that one!) hit a curling low effort to see the keeper well beaten. With the scores level, the home side was invigorated and they had the ball in the net a minute later, only to see it ruled out for offside. From there on in until half time, it was fairly equal in terms of play and the sides went in level. At half time we went in the clubhouse to check on the England score which was 0-0. The second half kicked off a few minutes early but the game was slightly less lively than the first half, but still with Olney shading it. But there was not much in it and 2 minutes from time Mark Umney went in a fantastic individual run and lashed the ball into the net to give the hosts the lead with a blinding goal. It was around 9.40 by the time we left. On the way home, we listened to the reaction from England's  2-0 win over Switzerland where Wayne Rooney scored his 50th goal for England to become record highest goal scorer. Minnows San Marino were unlucky in a last-minute defeat to Lithuania in the same group. We got back to Aylesbury in about an hour and I was home myself just after 11. After watching TV for an hour I went to sleep just after midnight.


THE HOLLOW is a smart and tidy ground that will serve the club well at either step 5 or 6. The main stand holds around 150 and there is also another smaller area of cover. The clubhouse offers a basic range of drinks while the tea bar is better than most at this level. The town of Potton is a short walk away but I am not sure what it had to offer as we didn't drive through it. 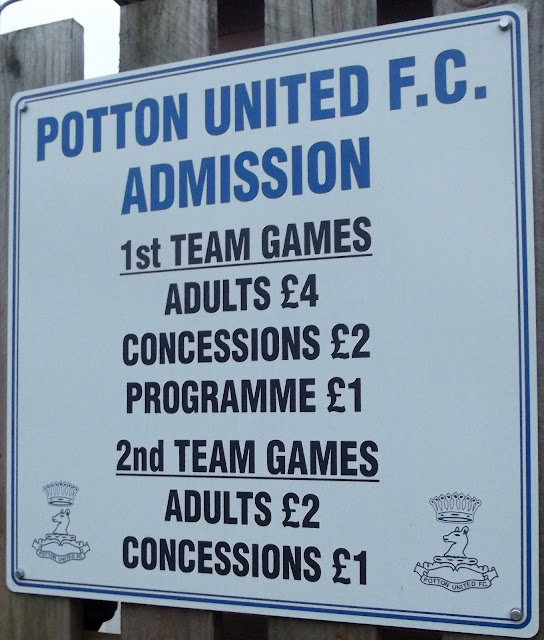 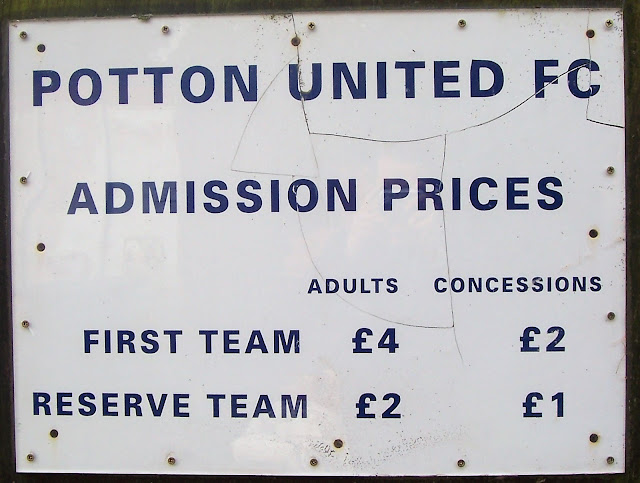 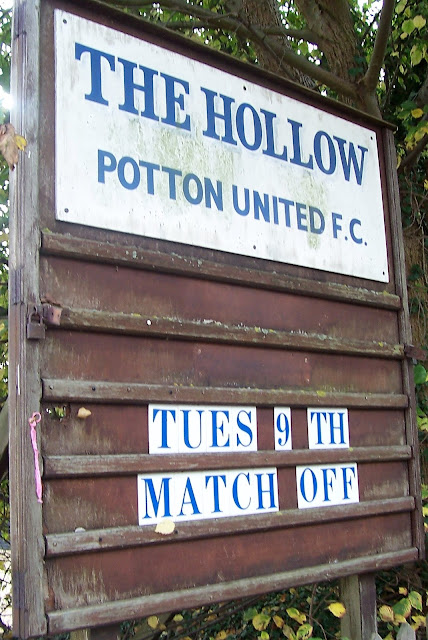 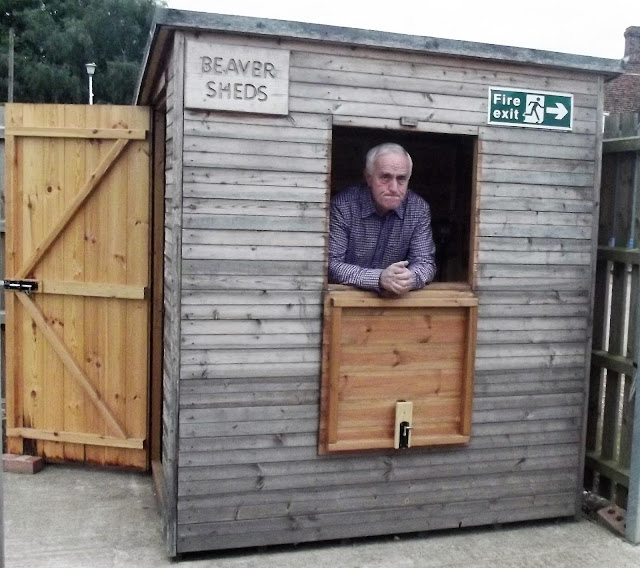 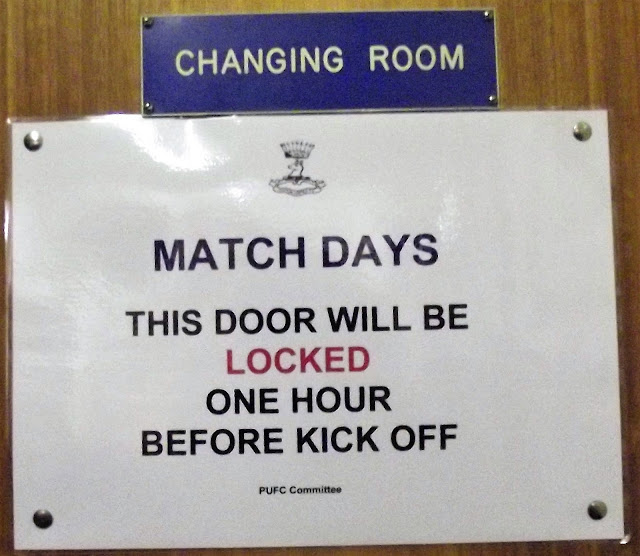 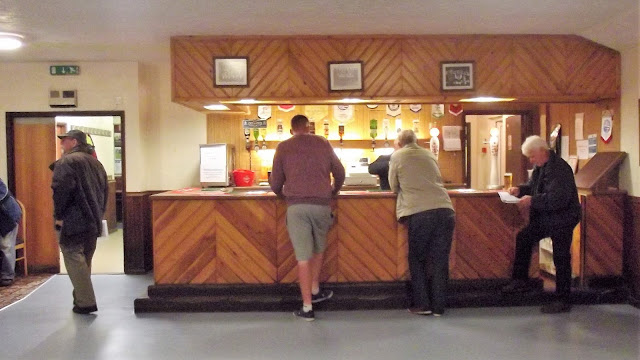 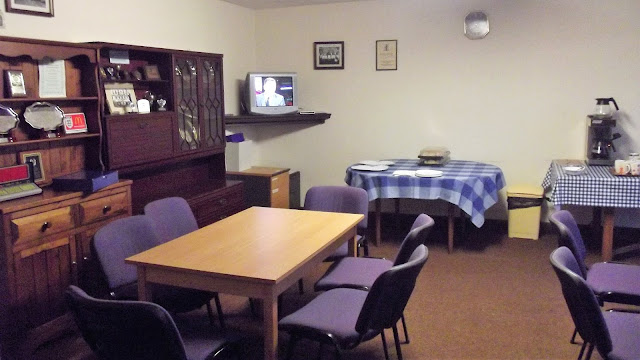 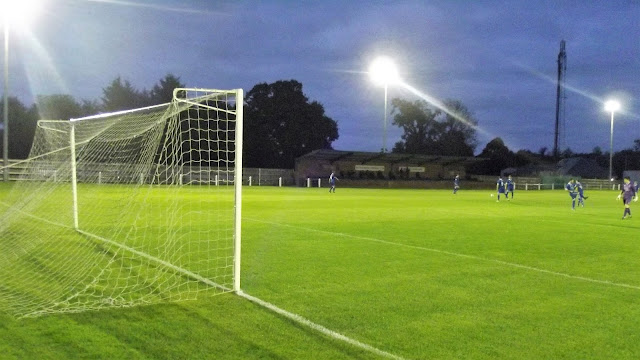 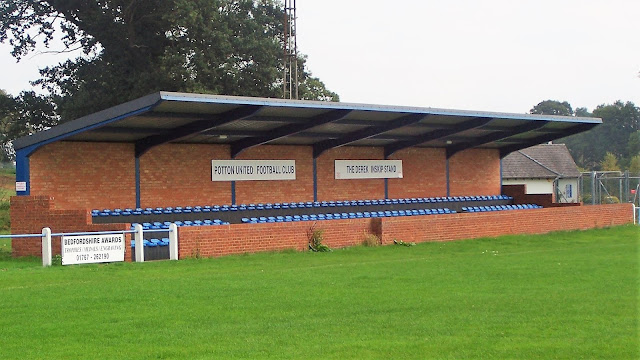 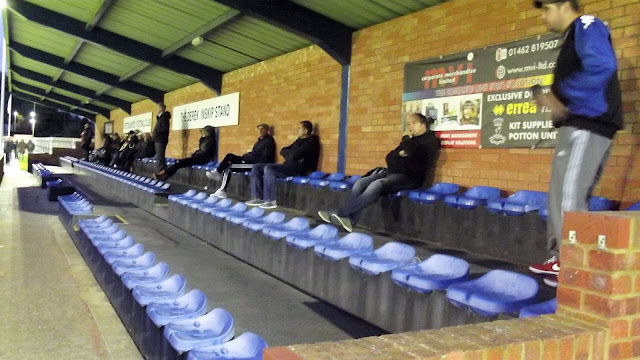 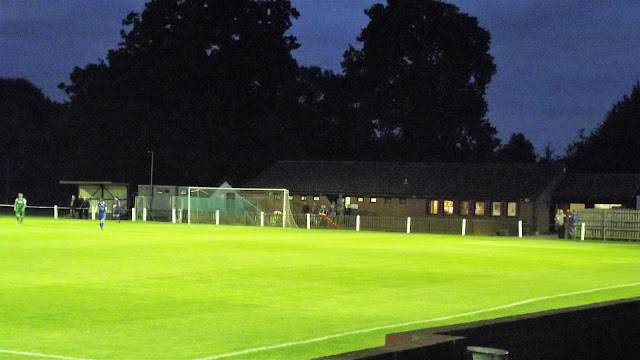 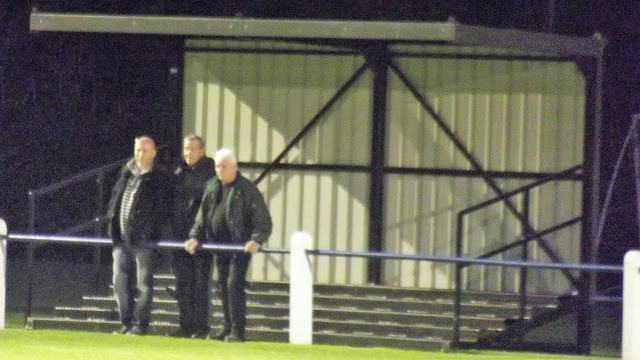 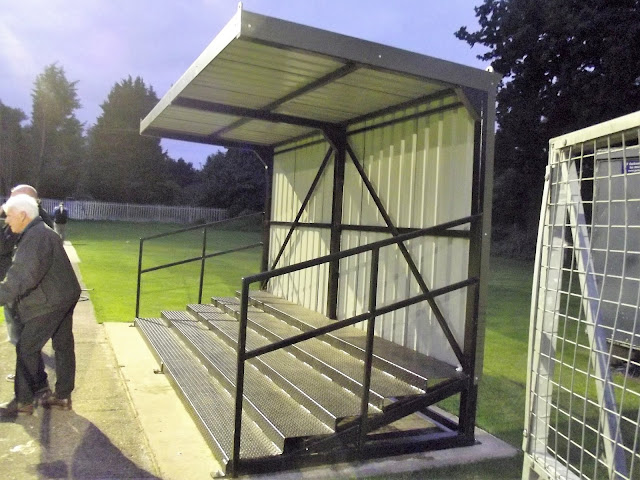 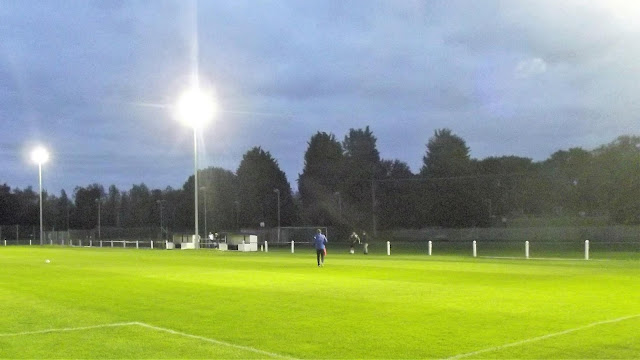 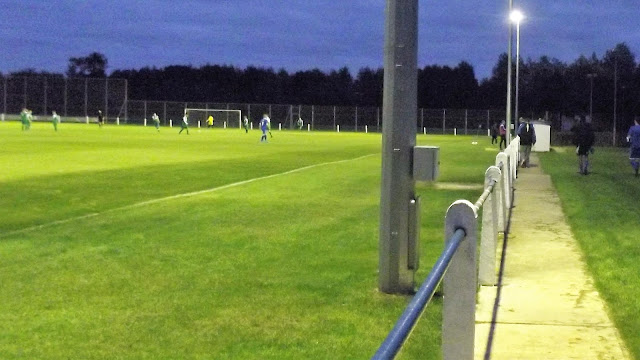 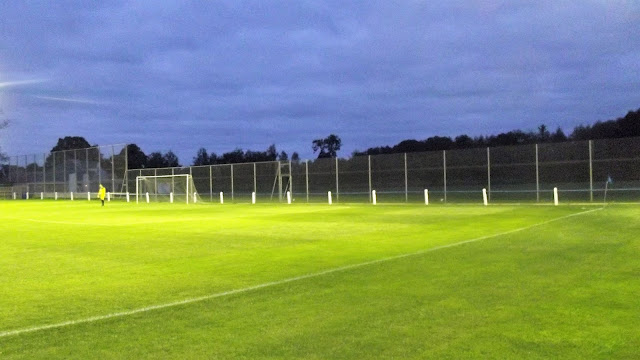