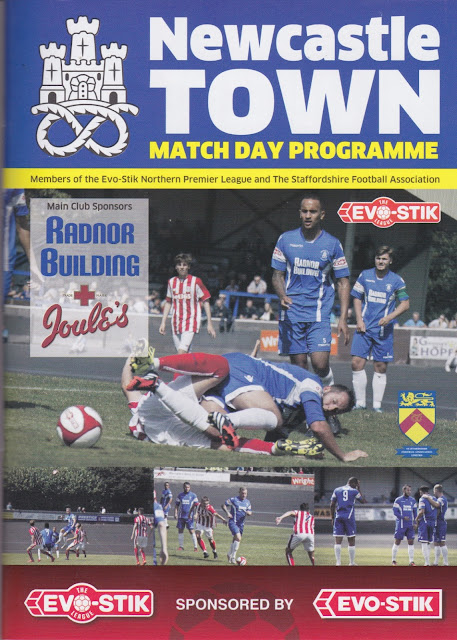 NEWCASTLE TOWN FC was established in 1964, originally as a Sunday League outfit. 2 years later the club adopted it's present form as they merged with Parkway Clayton after the original Newcastle Town ran into financial difficulties. After playing in various local competitions such as the Mid Cheshire League, they joined the North West Counties League in 1987. Starting in the lower of its 2 divisions they were generally successful and after coming second to Bamber Bridge in 1992 they won promotion to Division 1 (later to be renamed Premier Division). Again they were hugely successful with their lowest placing being a respectable mid-table position of 12th in 2007. Indeed they were runners-up on 4 occasions during this time, finally being crowned champions in 2010 with a massive 114 point haul. This entitled them to promotion to the NPL Division 1 South, a division they have remained in ever since. A runners-up spot in their first season was remarkable progress and despite not getting close to that in the next few seasons, last time out they finished 3rd. These 2 high placings led to playoff semi-final defeats to Grantham Town & Sutton Coldfield Town respectively.

In the FA Cup, the clubs previous best run came in 1996-97 when they reached the first round. Starting in the Preliminary Round they defeated Denaby United, Willington, Winsford United, Frickley United and Bamber Bridge in the subsequent qualifying rounds. This set up a huge tie against Notts County and the club did themselves proud, going down to a narrow 2-0 defeat in a game played at Stoke City. Since they joined step 4 in 2010 there has not been much of a run in the FA Trophy. Ten years previous, the FA Vase was a different story when they reached the semi-final. After progressing through 7 rounds, they lost 3-1 on aggregate to Kent side and eventual winners. Deal Town. A huge amount of local trophies have been won, the last being in 2010 when they won the Staffordshire Senior Cup 6-1 against football league side Port Vale. Their illustrious neighbours included 5 players with extensive first-team experience, including former Premiership striker Geoff Horsfield.

Originally for my week off, I had been planning to go to AFC Fylde v FC United of Manchester, thanks to a pretty cheap hotel in Blackpool. But it would still be an expensive journey fuel wise, plus I’d be stuck for stuff to do during the day as there’s only so much time you can spend on a pub crawl, especially if I’d have to drive after the game. So instead I decided to base myself at home. I decided that my Wednesday game would be Bradford Town v Hungerford Town - and I was hoping Anwar could come along to help out with fuel. He wouldn’t be coming on this Tuesday one though, as he was watching another FA Cup replay. as his own team Aylesbury playing Chesham United. Normally I’d have picked whatever was nearest, but as it was my week off I wanted to do something decent. So after highlighting 12 potential games, I set some criteria….

A game where I could go via Milton Keynes Market, as I wanted to go to a retro games stall there.
A ground that had a good programme shop
A ground with a decent pub nearby (in other words new ciders)
A ground with somewhere decent to eat before the game
Somewhere within 150 miles so as not to let the costs get too stupid
But most important of all it had to be an FA Cup game

After all that, it was narrowed down to 3 games - Stamford v Leamington, Abbey Hey v Thackley (breaking the 150-mile limit, but I’d be going into Manchester on the tram) and the option I finally plumped for - Newcastle Town v Coleshill Town. What swung it was the fact that I had seen Coleshill smash Ellesmere Rangers right back at the start of this seasons FA Cup and thought it might be nice to pick up the chain again. There was the temptation to go with another mate Laurence to Stamford and save a bit of money but then it wouldn’t have been so much of a day out with him leaving after work and the ground is around a mile or so from the town. 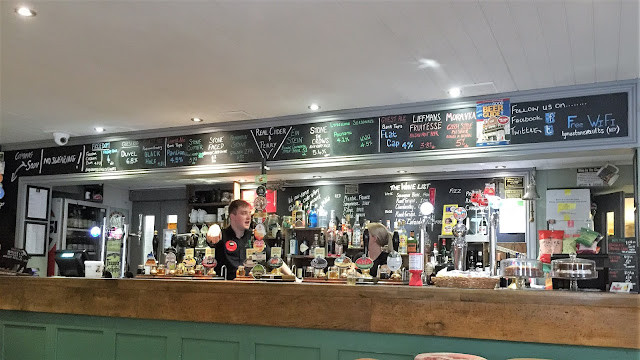 On the day of the game I woke at around 7.30 and watched last night’s Coronation Street in bed. I then had a bath and started researching tonight’s blog while I watched Wheeler Dealers. As I wanted to go to a couple of places on the way, I left shortly after midday, stopping at B&M Bargains in Aylesbury, before going on to Milton Keynes Market. I got what I needed in Aylesbury but Milton Keynes was a bit of a let down with the retro games stall not there. I left just before 3 after having a bit of trouble finding my car because everywhere looked the same. It was a slow but steady journey to Newcastle with miles and miles of average speed check and around half an hour delay due to traffic. It could have been worse due to an accident on the M6 but I had the foresight to come off at Stone. I got to the ground at 5.10 and took the 25-minute walk into town. There were a ton of great pubs, but I plumped for The Lymestone Vaults which turned out to be a real gem with about 15 different ciders all told. I had a few halves before going on to find some dinner. 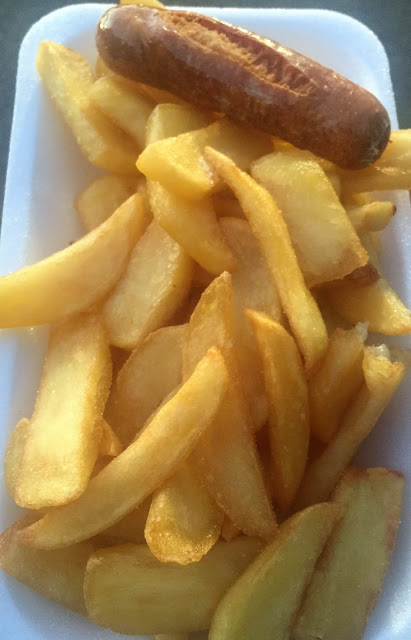 I found a takeaway called Mo's Kitchen and got myself some salt and pepper chips. They would be freshly cooked unlike the chippy next door, which I was told was a bit parsimonious with their portions. They were very nice with some decent garnish as well. Before going back to the ground I stopped at Aldi, getting some chicken, some cakes and a box of cider to take home. By 7.05 I was back at the ground and put my stuff in my car before going in. I paid a very reasonable £7 to go in, plus £1.50 for a nice thick programme. They opened the club shop for me but there was barely anything in there to buy apart from old programmes. As I wasn't going to be drinking anymore I got myself a sausage and chips for £2.20 while I waited for the game to start. 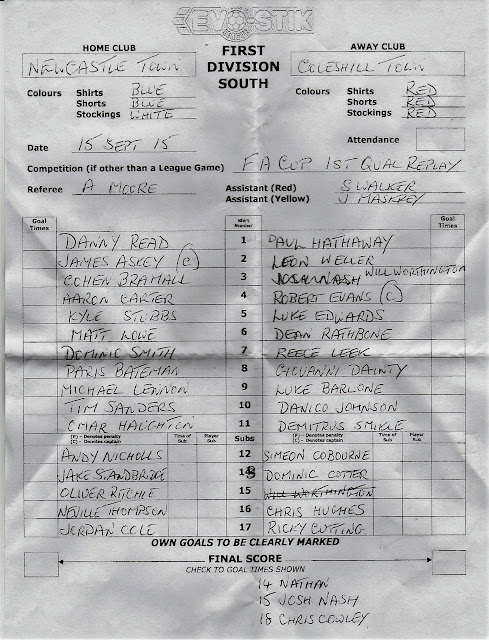 As for the game, it was pretty equal early on. The visitors took the lead on 10 minutes when Demitrious Smilkle curled in a shot off the right-hand post. Both sides were having chances but it was Tim Sanders who equalised for Newcastle on 23 minutes, tapping in after a low ball across the 6-yard box. Coleshill were the better side though and just before halftime Reece Leek sprung up to give them the lead at the interval. The second half started with Coleshill well on top and they extended their lead on 58 minutes when Smilkle got his second when he shot past the keeper. Apart from the occasional breakaway, the lower league visitors continued to dominate and they had several chances to make it 4, not least on 71 minutes when they forced home keeper Danny Read to save smartly with his feet. Visiting keeper Paul Hathaway had to tip the ball around the post during a rare Newcastle attack 10 minutes from time. That was pretty much it as far as chances went and Coleshill fully deserved their win. The journey home was a pain with a 40-minute delay overall after I had stopped at ASDA for petrol. Most of this was caused by the M6 being closed for a junction and everyone being sent on a diversion with massive queues to get off the motorway.. There were also other stretches that were restricted speeds, but at least they were moving. I got back home at 12.50 having had a good day out, even if the shopping aspect of it had disappointed a little.

THE LYME VALLEY STADIUM is a unique stadium, thanks to it’s cycling velodrome track that is around the pitch. Unlike an athletics track, it doesn’t really impede your view, with only the ends being a massive distance away from the pitch. It’s mainly open, with the main area of seating holding around 300 and being raised well above pitch level and offering good views. There is also a smaller stand reserved for officials. Over the other side of the pitch is a fairly large covered terrace holding around 700.

The tea bar is decent, offering large portions at good value prices, while the bar offers the usual choice you would expect from a football clubhouse. The club shop has a load of old programmes but not a lot of merchandise and had been downscaled since I had visited to take pictures of the ground in 2007. The pleasant town is a mile walk away and offers the excellent Limestone Vaults pub which is one of the best establishments I have been to. 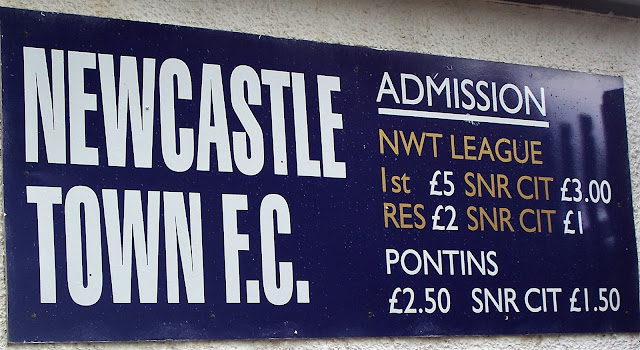 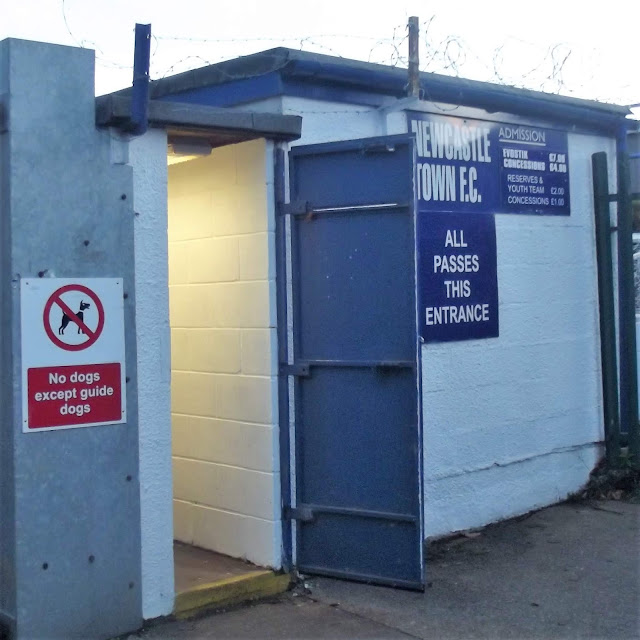 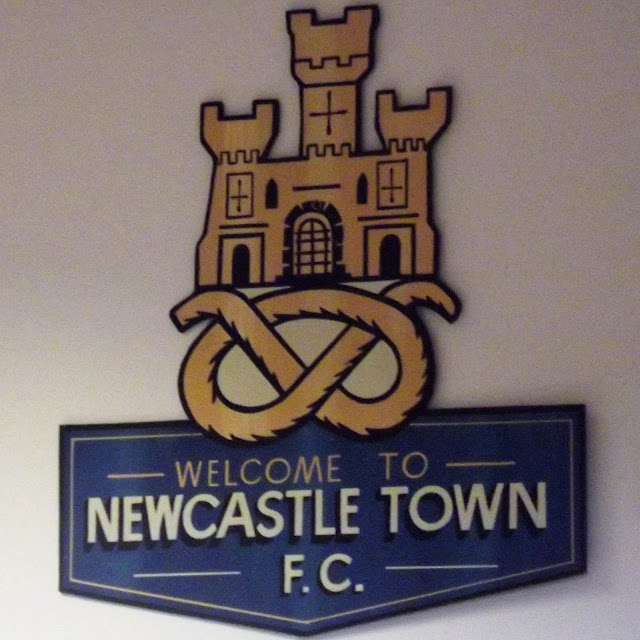 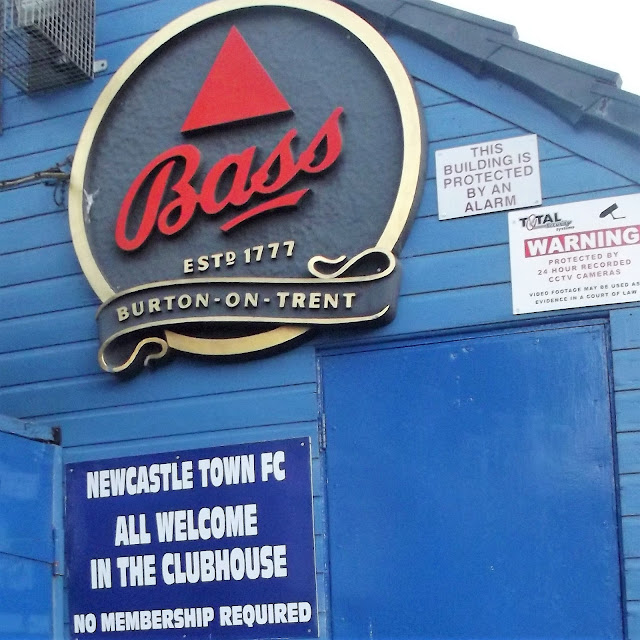 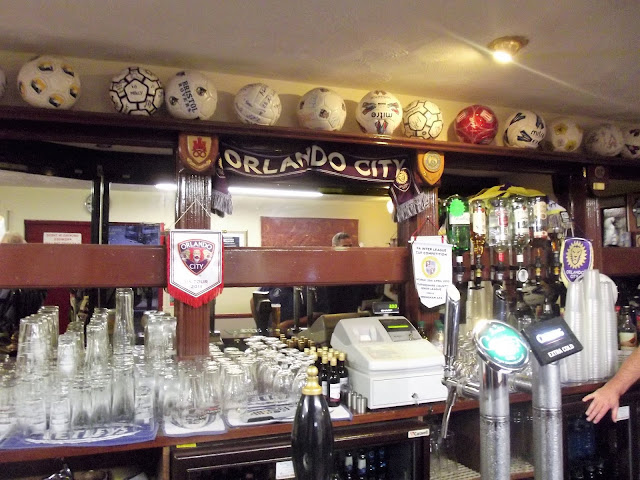 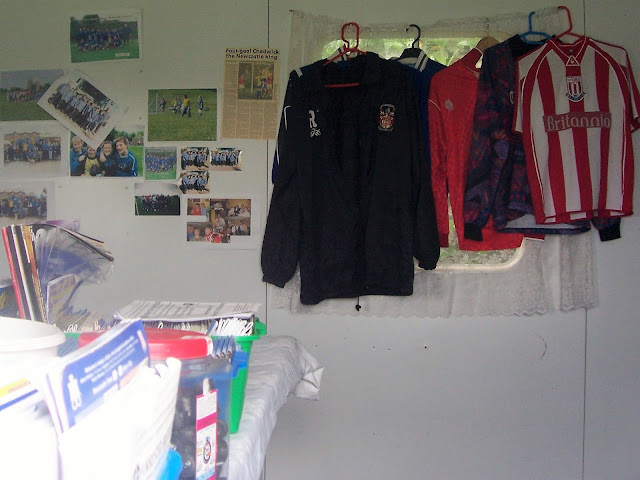 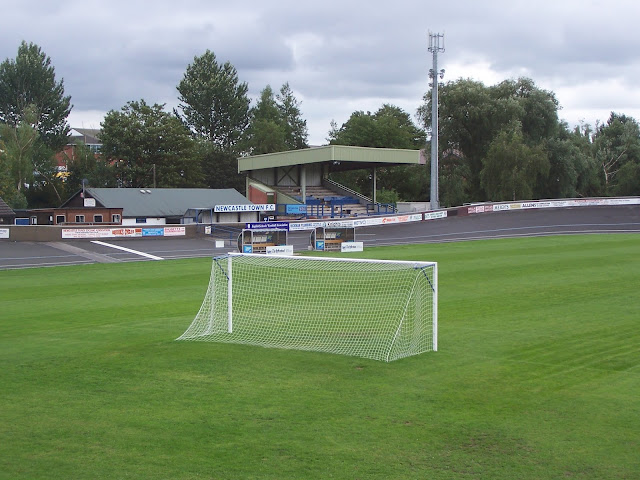 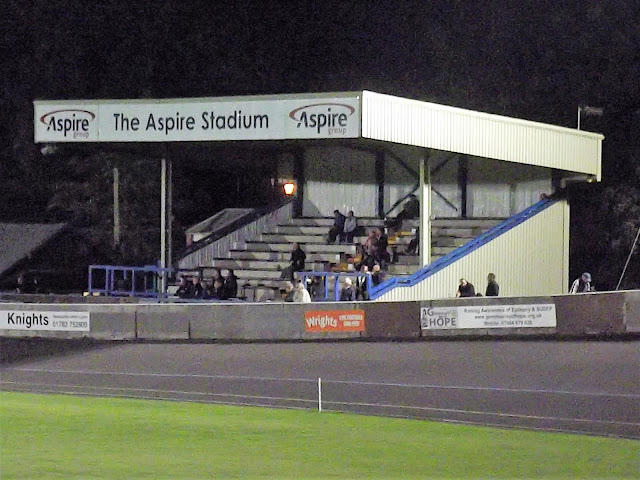 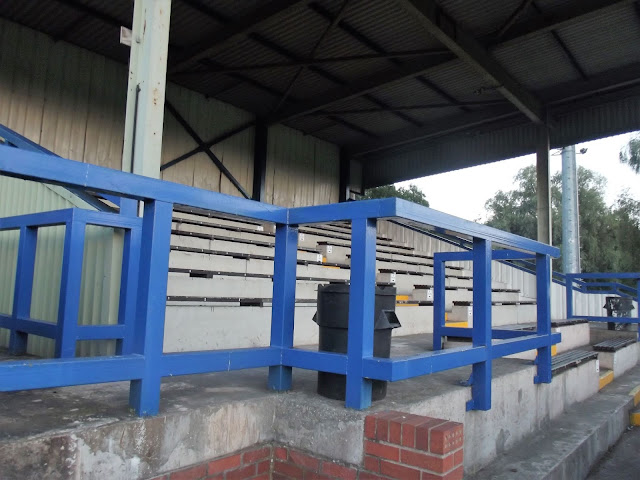 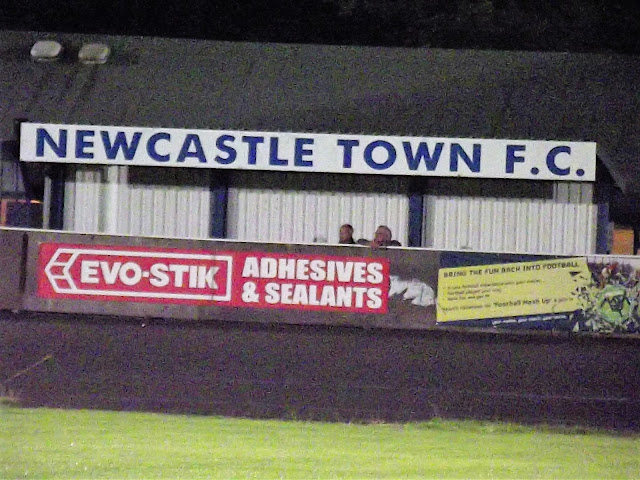 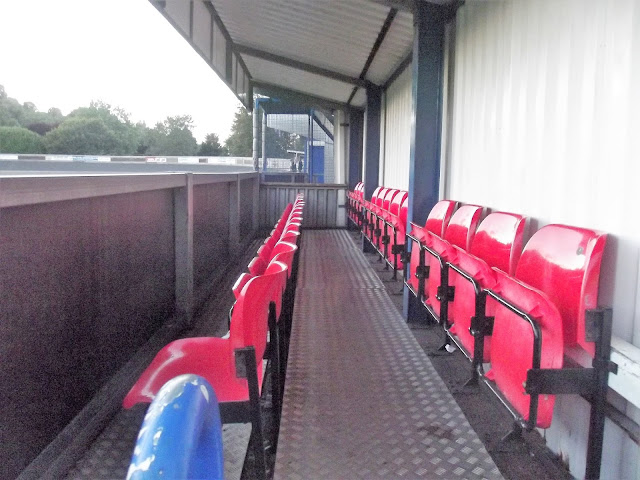 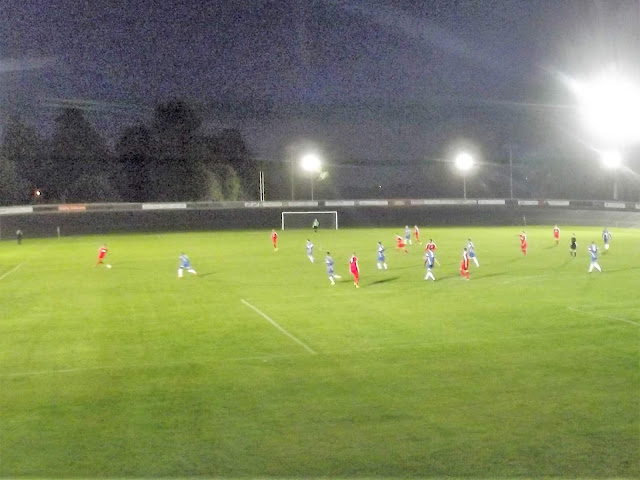 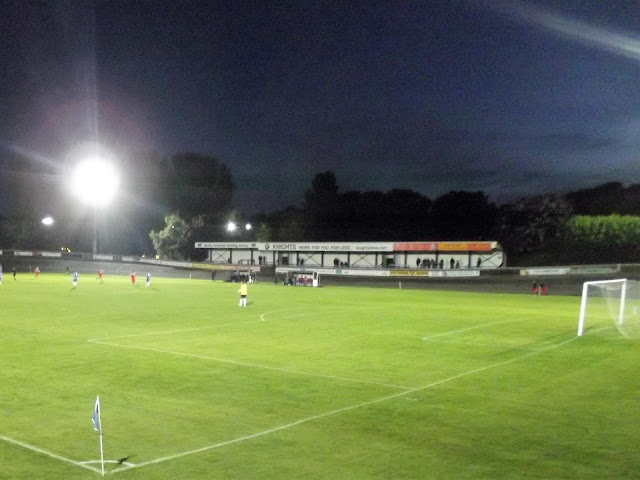 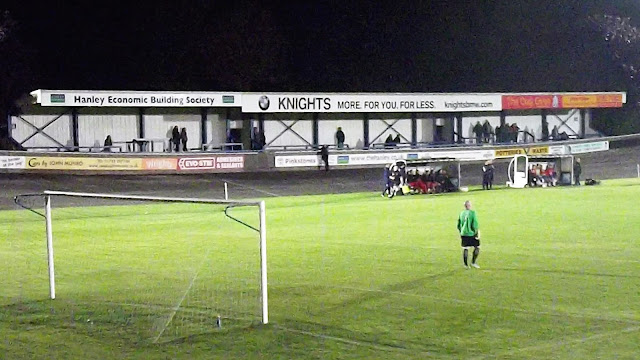