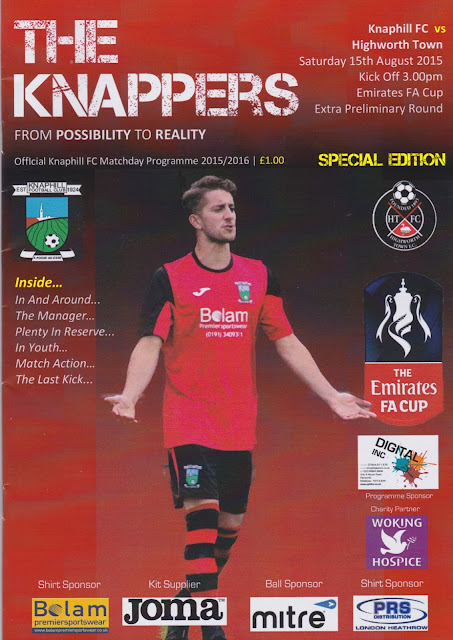 KNAPHILL FC was established in 1924. Little is known of their early days with them playing in various local leagues including the Surrey Intermediate. in 2007 they joined the Combined Counties League Division 1. A series of well-placed finishes were achieved but in 2014 they finished 3rd behind Spelthorne Sports and Eversley and California. This was deemed good enough for promotion and they took their place in the Combined Counties League for the 2014-15 season. A mid-table finish of 13th represented a solid first season at the new level. The new season has started with a win at Bedfont Sports and a defeat at Horley Town in their 2 leagues games so far.

FA Cup wise, this would only be their second season in the FA Cup. Last season they had a decent debut - beating Fairford Town and Badshot Lea before a narrow 2-1 defeat to Southern League side Fleet Town. In the FA Vase, last season was also a decent effort, equalling their previous best finish of the 2nd Round. Woodley Town & Lordswood were defeated but a loss to fellow Combined Counties League side Hanworth Villa ended their interest in the competition. There is a highly comprehensive Wikipedia article covering all kinds of facts HERE. 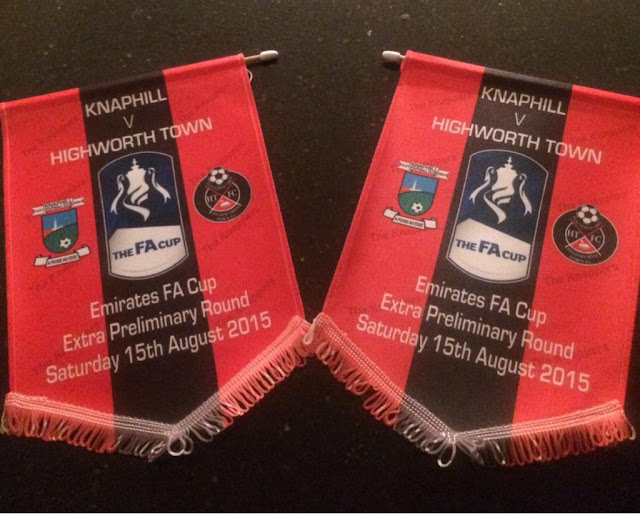 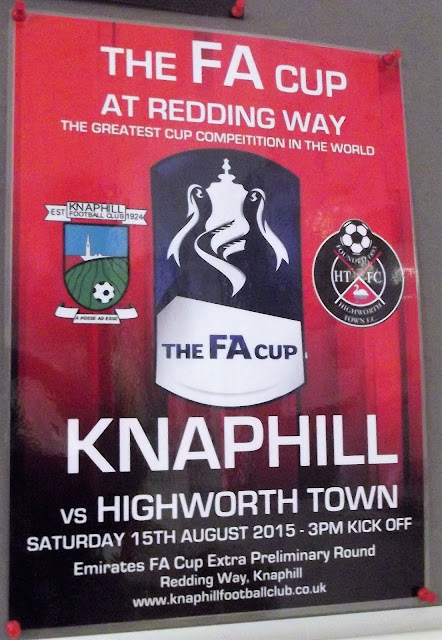 With Wycombe being away at Barnet, I decided to seek an alternative game. I’d been to The Hive 2 seasons in a row and fancied a bit of a change. Seeing as I loved the early rounds of the FA Cup it was certainly going to be a game in that competition. As I’d be without Anwar, I was looking for something local and if possible south of my location. For pretty much the whole time I was off to Knaphill v Highworth Town apart from when I thought I might make a day of a game in London. But on Friday I’d pretty much made my mind up, barring any last-minute changes if I’d had to go to Borehamwood to pick up a laptop I’d made an offer on. Knaphill was near Woking, but it caused much confusion amongst people near me as Naphill (same name but without a ‘K’) is a village 2 miles from my house. On the day of the game, I woke around 8am. I spent the morning loafing around and researching today’s blog. I had to pop into work to sort out a parking ticket I had been incorrectly given when I had a hire car back in May, so after having some Chilli Con Carne for lunch I left at 12.45. After stopping at ASDA I drew some cash out and was shocked to find out that I was in overdraft. I quickly transferred some money from my Paypal account to cover the deficit so that I didn't get any nasty charges. 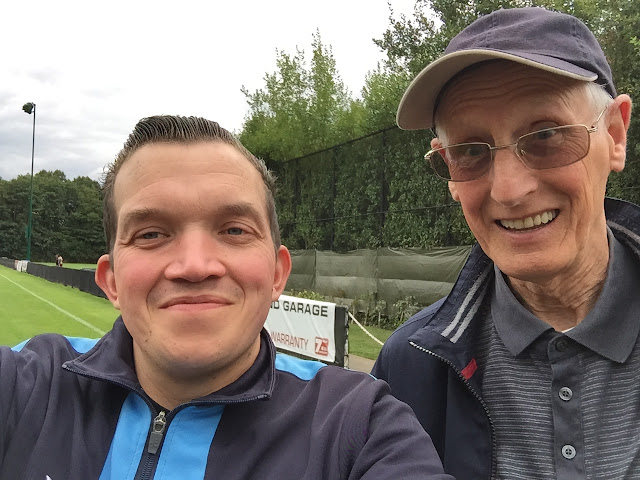 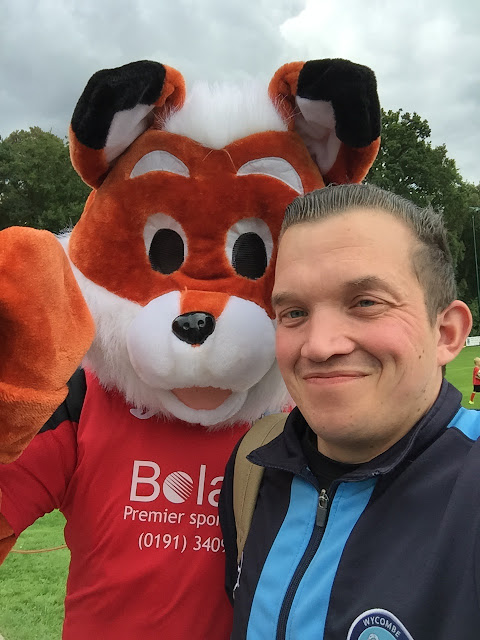 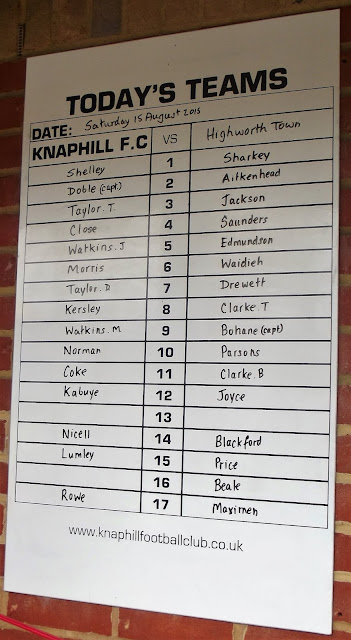 Once I had avoided the M25 which was knackered as ever, it was not a bad journey. It took around an hour from ASDA and I was in Knaphill at 2.15. As I was going in I met Leicester Alan who was also hopping this game. I paid £6 to get in and £1 for a very nice programme. I went to the bar and had a pint of Bulmers while waiting for the game to start. It was a very quick start to the game. Brad Clark opened the scoring with a fantastic goal into the top right-hand corner after just 18 seconds. Knaphill equalised on 21 minutes through Mark Watkins. 4 minutes later there was a pretty dreadful challenge on the Knaphill keeper but the referee didn't even book the offender. Highworth retook the lead on 36 minutes. A good cross picked out Richie Saunders and he finished with aplomb. There was plenty of good play but not much end product. Nathan Blackford sealed the game for Highworth on 80 minutes. He got away from the home defence and finished well. In the end, it was a fair result and a reasonable game, though it was a shame that there were not more shots on goal. After the game I drove straight home, getting back at 5.45. Looking at the results and planning my Wednesday night, I was disappointed to see that there was no viable FA Cup replay, barring Padiham getting a draw at Whickham tomorrow. I guess I will finalise things tomorrow when the game is played and the Non-League paper gives me some alternatives. I'll be at a game myself as Epsom & Ewell take on Erith & Belvedere in another FA Cup game. 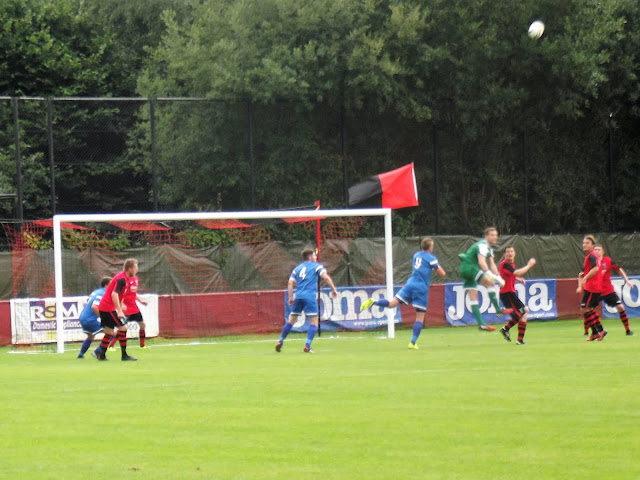 REDDING WAY is a nice place to watch football. It is typical of newish builds with 4 small stands. 2 of them are seated and a 2 are standing with probably 50 capacity in each of them. The rest of the ground is open although behind the far goal is closed off to fans. The bar and tea bar were decent enough and there was merchandise on sale too. It's quite close to the town if you have time. Overall a very friendly club and well worth a visit. 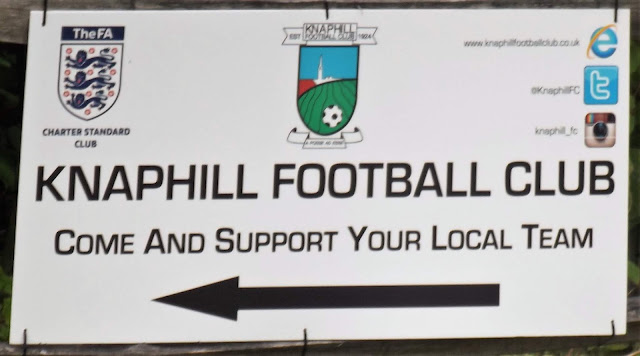 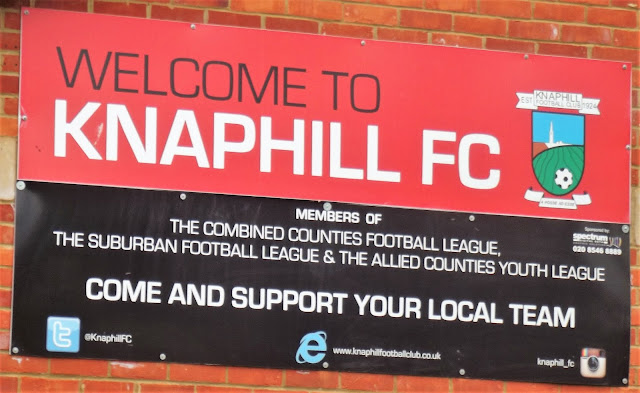 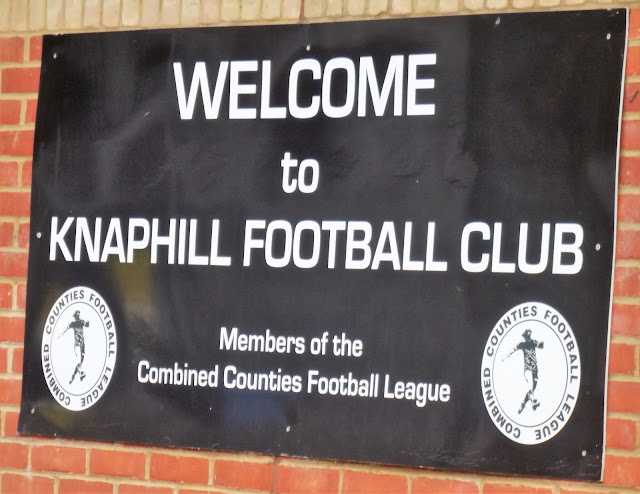 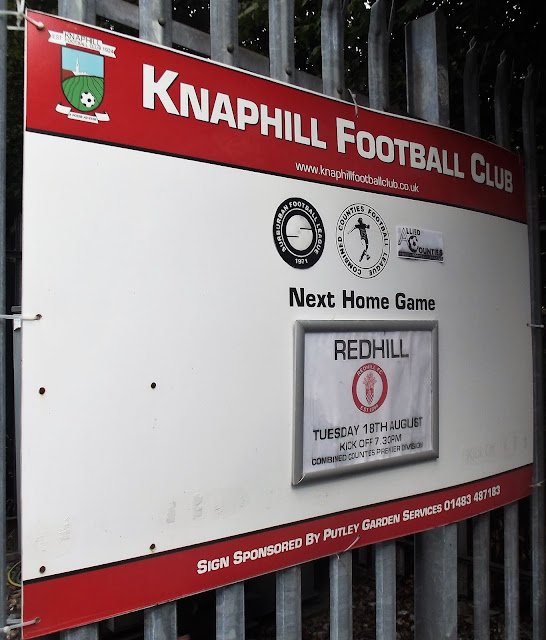 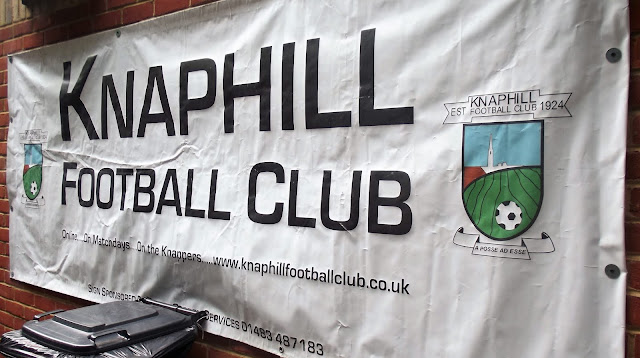 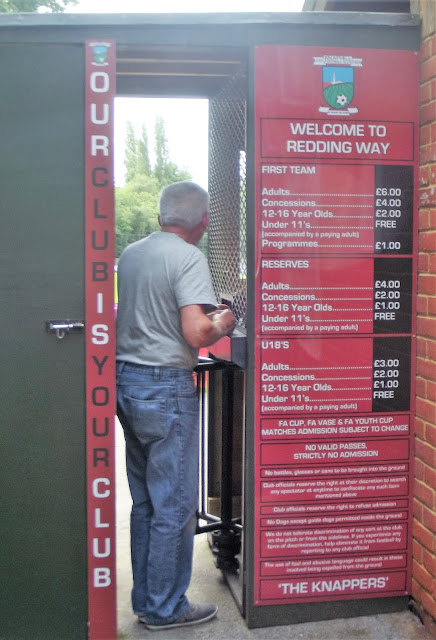 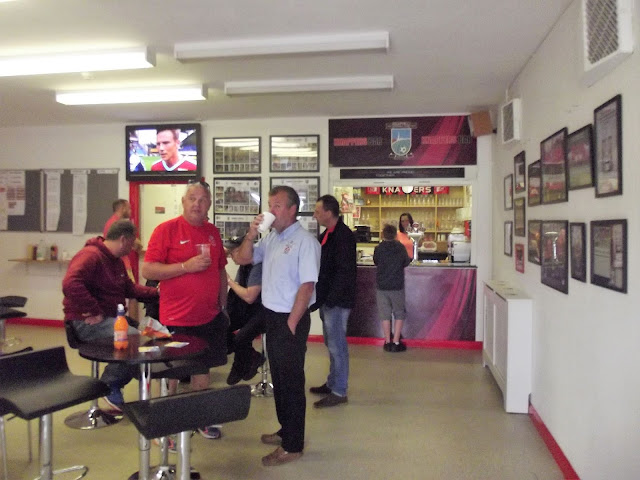 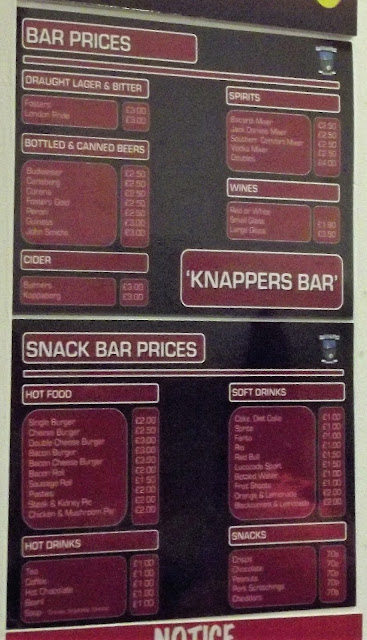 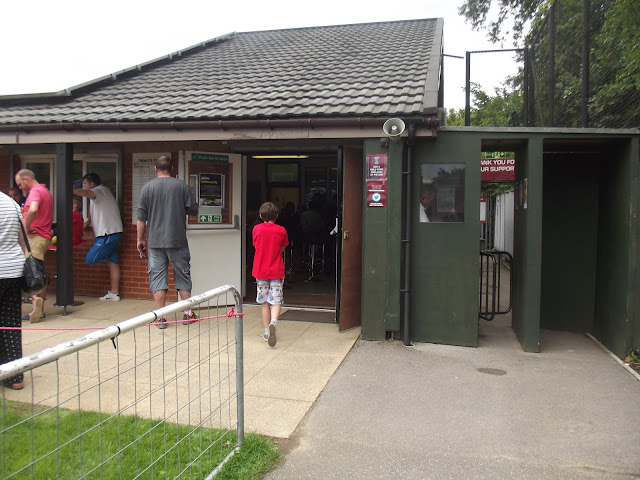 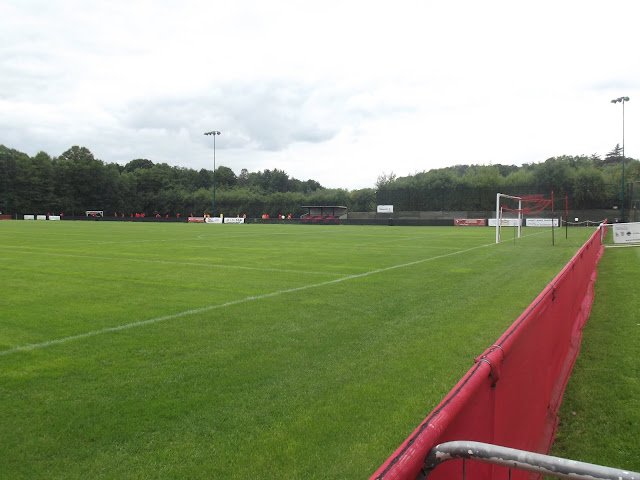 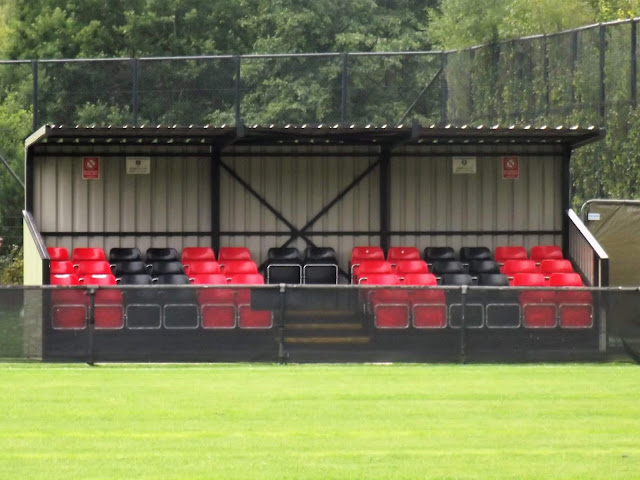 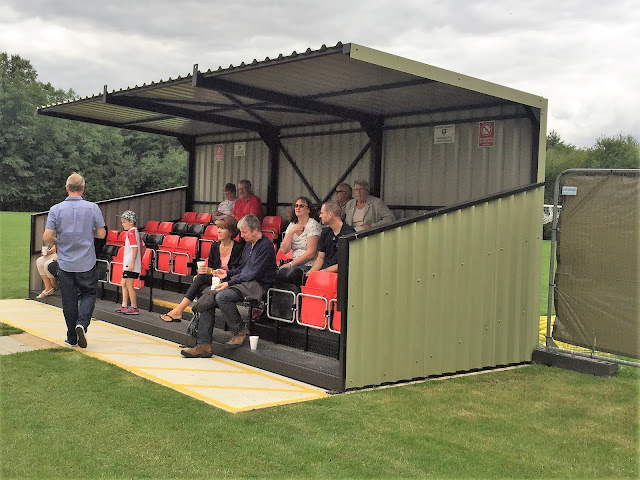 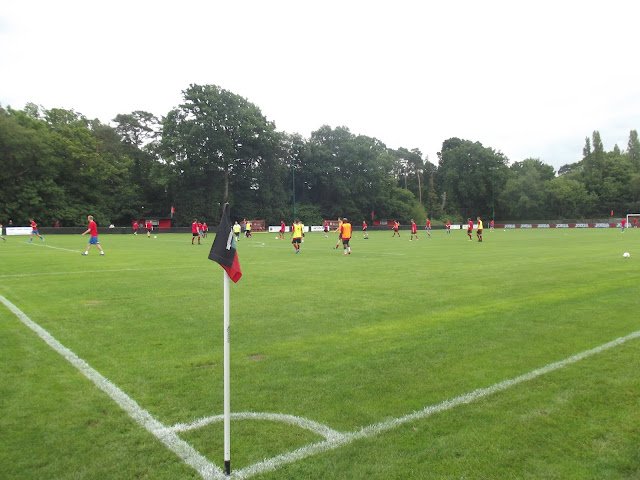 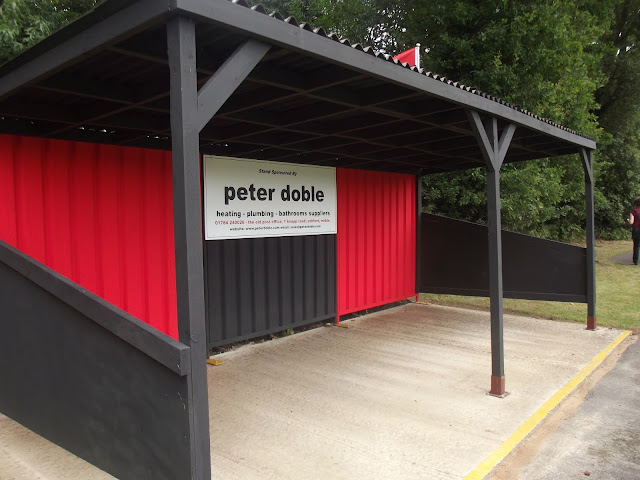 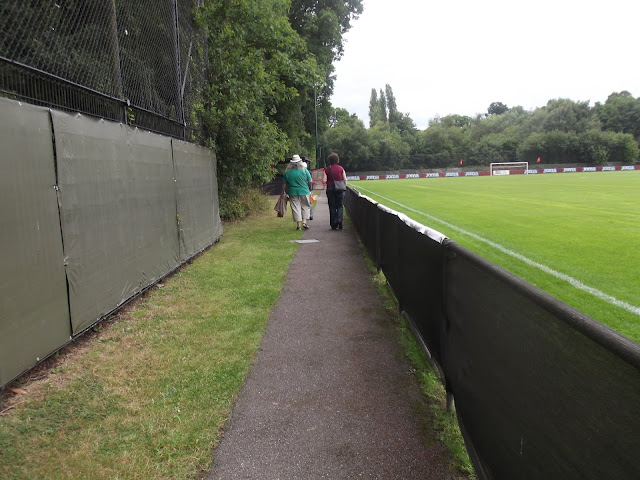 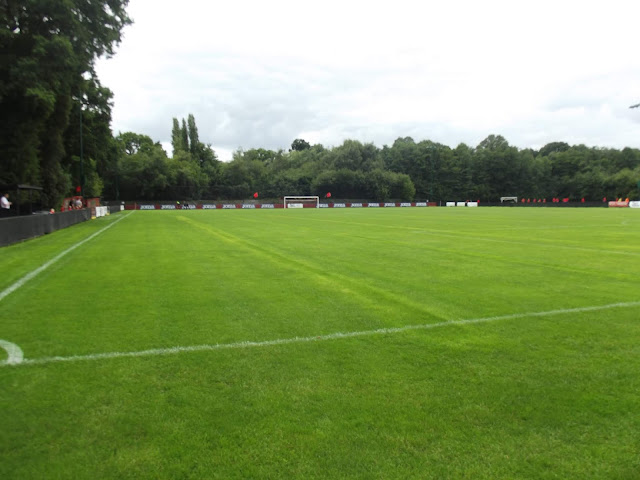 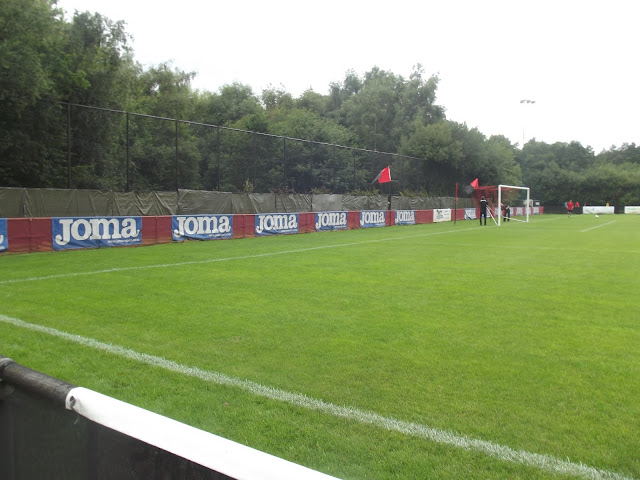 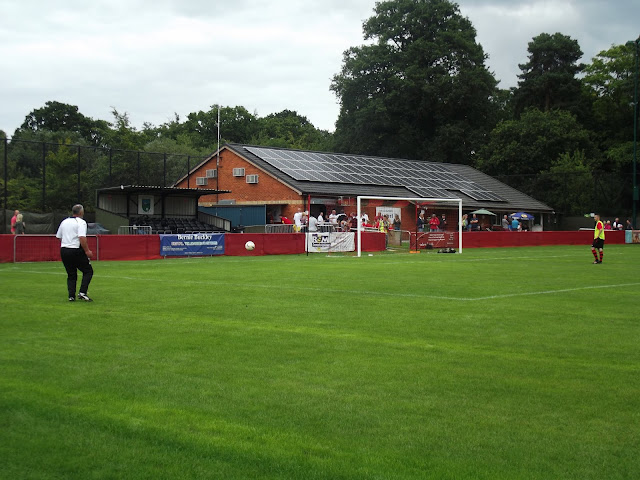 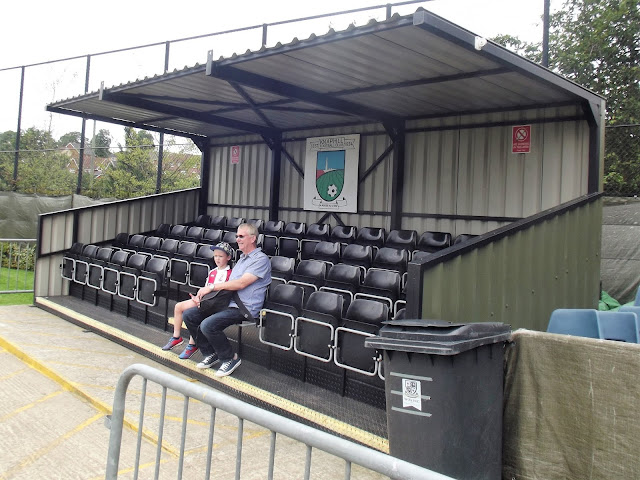