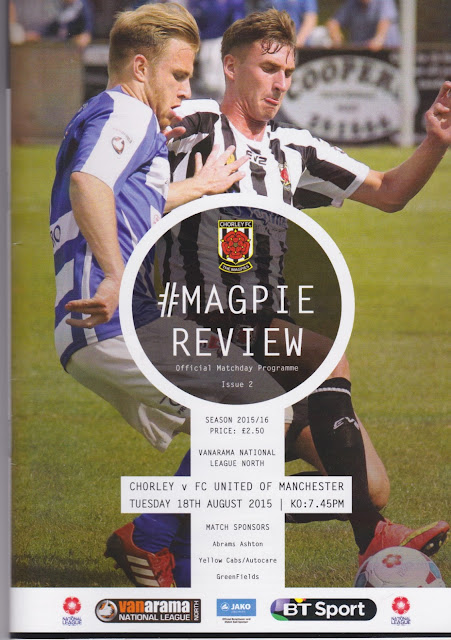 CHORLEY FC was formed in 1883. They spent much of their early years in the Lancashire and Cheshire Leagues, with a few seasons in the NPL at the start of the 1970’s. They made the switch full time in 1982 and after seasons of mixed results, they won the league in 1988. This meant promotion to the Conference - the top tier of non-league football. A couple of generally unsuccessful seasons would see them finish 17th and 20th, the latter placing meaning they were relegated back to the NPL. A period of decline followed, and in 1999 they were relegated again to the NPL D1, with results not really improving until 2011 when a 3rd placed finish saw them finish in 3ed place and win the playoffs against AFC Fylde. Since then they’ve not looked back. After finished of 3rd and 8th, they won the NPL Premier in 2014. A 4th placed finish in the Conference North last season could have meant promotion but they lost out to Guiseley in the end of season playoff final.

The club might have struggled in the Conference but it was during that time they hit national headlines in the FA Cup. It started back in the 1st Qualifying Round where they beat Horwich RMI 2-1. Further victories against Penrith, Armthorpe Welfare and Bishop Auckland set up a duel against fallen giants Wolverhampton Wanderers who were in Division 4 at the time. Owing to their own ground being considered as not good enough, they moved the game to Bolton Wanderers’ Burnden Park ground. They drew the first game 1-1, and that was the same score in the replay at Wolves. Back in the day, replays didn’t go to penalties and so it was back to Bolton for a second really. This time Chorley shocked Wolves by hammering them 3-0. They were rewarded with a local; derby against Preston North End and although they managed to draw in their ‘home’ game at Blackburn Rovers, they lost the replay 5-0.

They’d have to wait around another 10 years for their best ever FA Trophy run when they reached the semi-finals. They beat Atherton LR, Eastwood Town, Boston United (after a replay), Gainsborough Trinity, Boreham Wood (again after a replay) and Gateshead to set up an encounter with that season’s Conference reigning champions Macclesfield Town. Considering they finished 14th in the NPL Premier that season they had done great, but the Cheshire side were too strong for them, triumphing 4-2 over the 2 legs. Their current manager is the former Premiership player Matt Jansen who most famously played for Blackburn Rovers. Amongst their league successes, he also helped them win the Lancashire FA Trophy for the 16th time last season.


I’d wanted to go to Chorley’s Victory Park ground for some time. I’d actually been to take pictures of the ground, back in March 2005 before Wycombe’s game at Rochdale. Back then I was only really interested in getting photos of grounds, but in the last few years I have become a serious groundhopper. And Victory Park is up there with the best regarded out there. When I looked on my week off, I saw that they were at home to FC United. Even better I managed to bag a hotel right in the town for a reasonable £27 a night. This meant I’d be able to park up in at the hotel, go into town for a few pints without worrying about driving. I don’t think I’ve been able to do that on any of my weeks away, so it was a real bonus.I was a bit concerned that the game might be all ticket given that it was one of their biggest games of the season, but nothing was announced.

On the day of the game, I awoke around 6am after a restless nights sleep, which always tends to be the case when I've had lots of Irn Bru the night before. I looked on the Internet before having a bath and packing my bags. After I'd watched Coronation Street on my tablet I went and put my stuff in my car and went to Morrisons for a nice fry up. After breakfast, I still had nearly 5 hours to kill so I walked a 3 miles round trip to Salford shopping centre but even then it was still only 10.30 when I got back to my car. 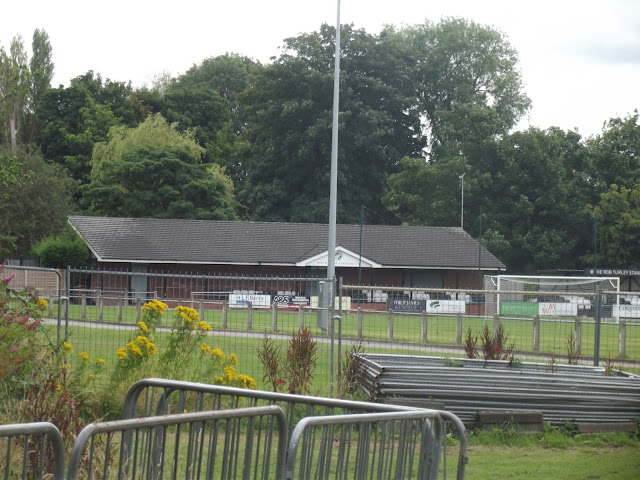 I killed more time by going and having a look at West Didsbury &  Chorlton FC which was all locked up but thanks to the zoom on my camera I did at least get some pictures. I then got stuck for an hour on the M60 after someone flipped their car. Usually, I'd be cursing them but on this occasion, I was quite relaxed about it as I still had time to spare. I went and had a look at Lancashire League side Euxton Villa which was all shut up, but at least I got a picture of the sign. After a toilet stop at Tesco I made my way to Chorley. My hotel (or at least it's car park) was tricky to find in the tiny streets but by 1.40 I was parked up in the 3 space car park. As there was no answer I made my way to the micropub on the market called the 'Bob Inn' and had a pint of Farmer Jim's cider. 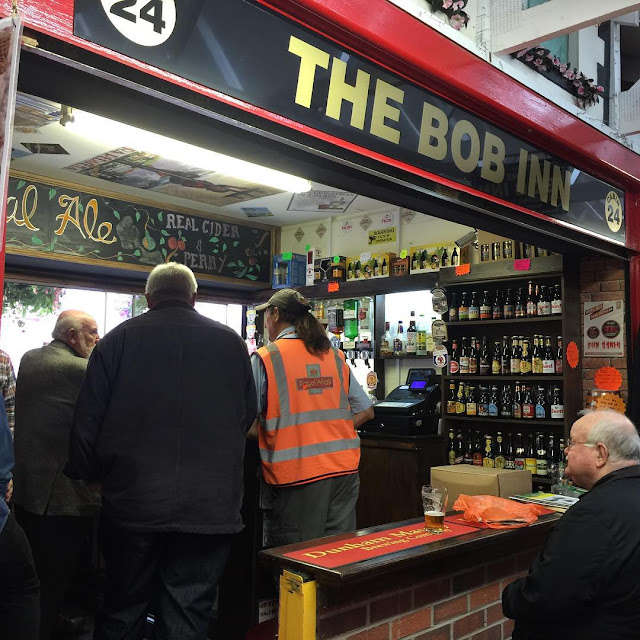 It was 2 by now so I went and checked in before making my way to another micropub called 'Shepherds Hall Ale House. There I had a pint of Merry Monkey cider which was really sweet. By then I fancied something to eat, so I went to Pound Bakery. A Mexican Chicken bake and a beef chill bake were consumed. I got the two of them for £1. Very nice they were too. After that, I had a look round the shops before going back to my room at 4. I chilled for 90 minutes or so until it was time to leave for the game.

At 5.40 I went over to the local Wetherspoons, Sir Henry Tate. As it was steak night I got myself a 14oz Aberdeen Angus steak with a pint of Strongbow for £8.35. It was tipping it down by now and I was hoping it would clear up before the time I had to leave. I had a pint of Black Rat cider and waited for the rain to die down, leaving at 6.30. 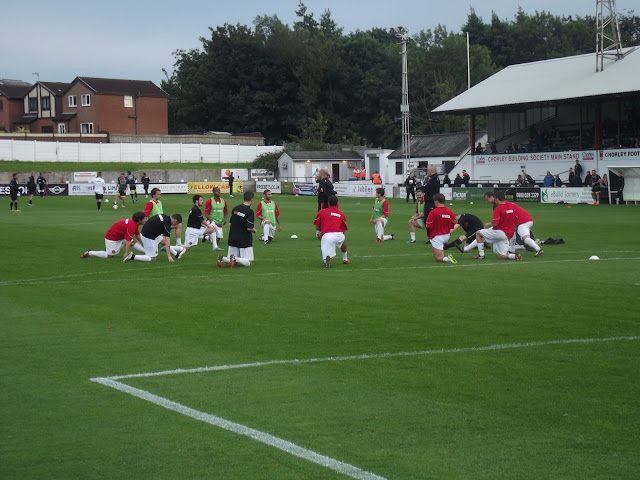 It was around a 10-minute walk to Chorley FC and thankfully the rain had stopped. I got there about 6.45, paying £10 to get in and £2.50 for a nice thick programme. I had myself a pint of Strongbow to help the club out because that's the kind of guy I am. Once I had sunk that I went to the club shop to buy a pen and took a seat in the stand for the game. When I’d planned to go to the game I’d expected to be seeing a battle between 2 promotion favourites, despite it only being a few games in. This turned out to be the complete opposite of reality with the hosts being bottom with their sole point coming on Saturday when they drew 2-2 at Corby Town. That was the same day FC United got their sole point against Tamworth but owing to goal difference they were a couple of places higher. Below is the report from the FC United website. 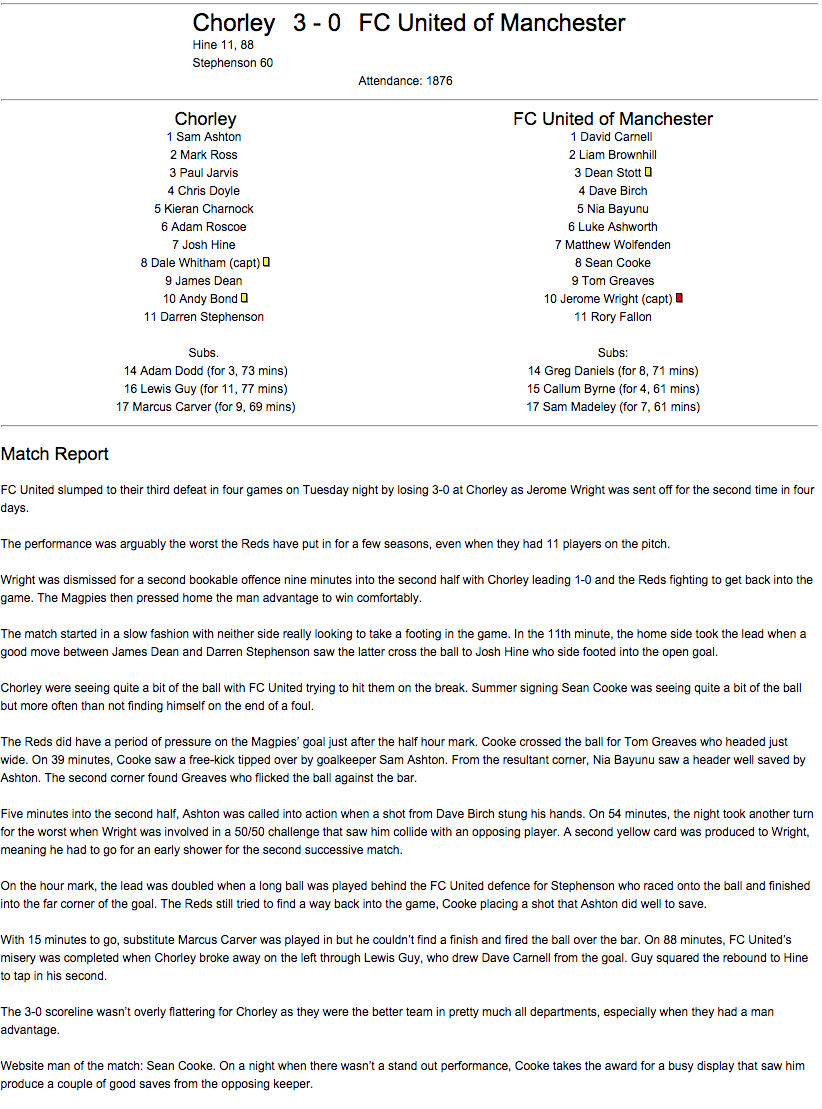 After the game, I went back to the Wetherspoons and had myself a pint of Somerset Fruit Forager before returning to my room at 10.30. I watched a bit of 'Dave Gorman's Modern Life Is Goodish' before going to sleep just after 11.30. It had been a good day at one of the better grounds I have ‘hopped’ in recent times. 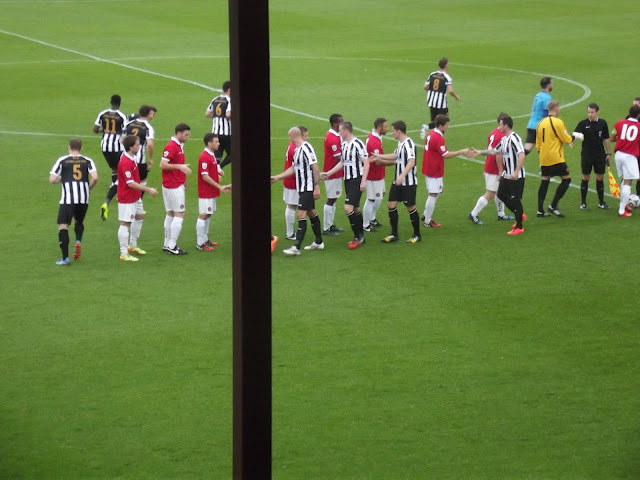 
VICTORY PARK is a traditional non-league ground and of a type that is becoming ever rarer in modern times. The main stand holds around 900 and has some terracing down at the front. The seating area itself is raised above ground level which offers a nice elevated view, albeit with the pillars getting in the way occasionally as with all old stands. Opposite is open flat standing. The 2 ends are both terracing. To the left is a substantial open terrace which used to have a roof which was removed due to safety reasons. To the right is a smaller covered terrace which has grass banking on both sides.

The bar is pretty much your standard clubhouse with a reasonable range of drinks. I didn't try the tea bar but it seems to have a good reputation. The club shop did a reasonable range of merchandise but not old programmes from what I could see. The ground is a short walk from the town which offers a huge range of food and drink outlets including a decent Wetherspoons and a couple of great micropubs. 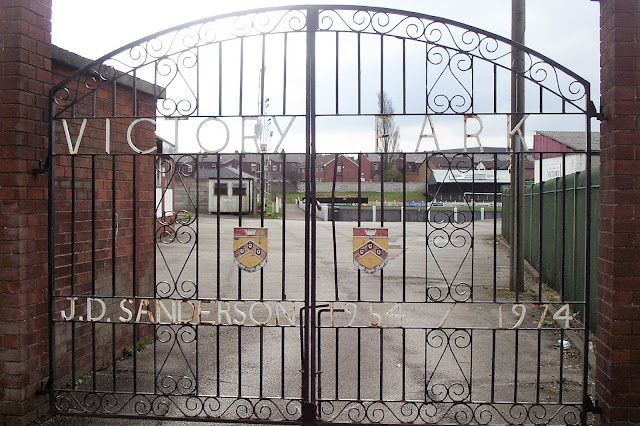 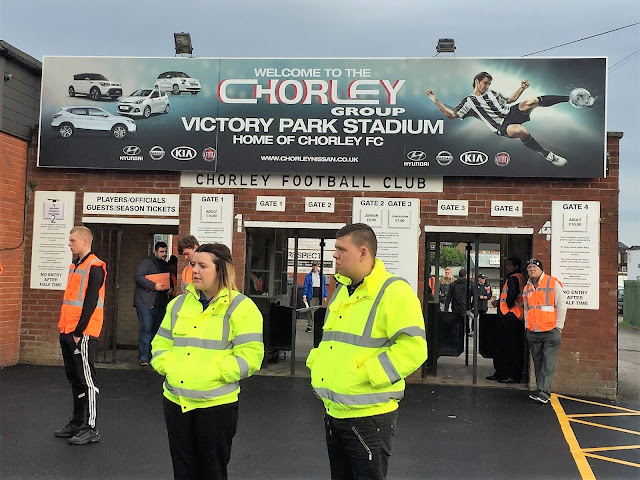 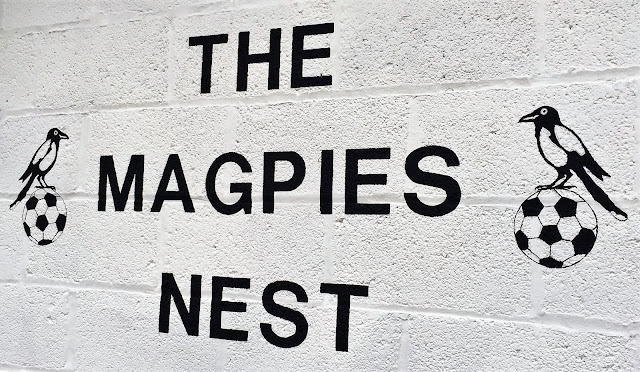 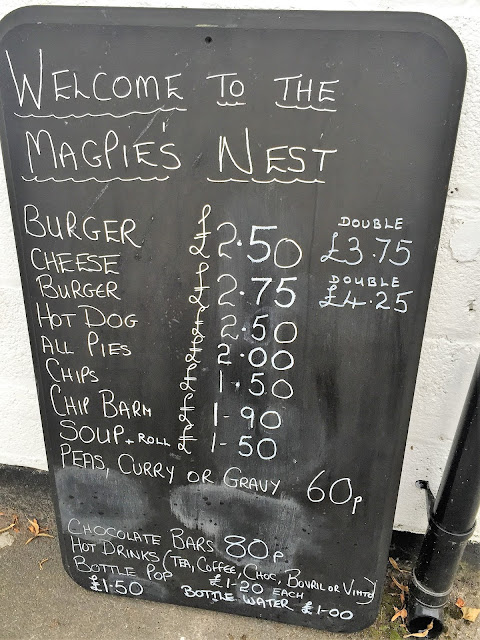 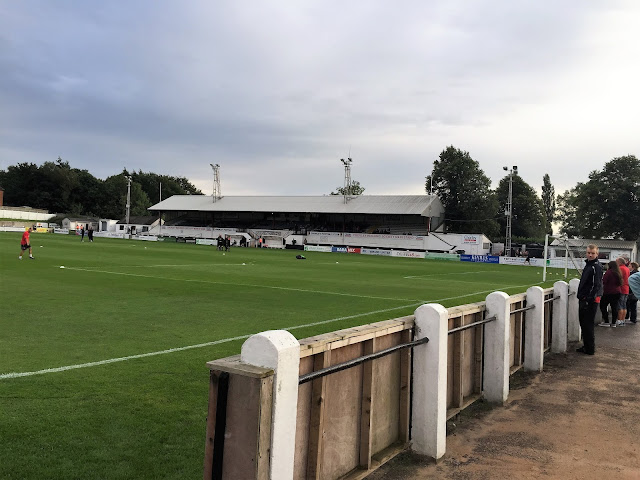 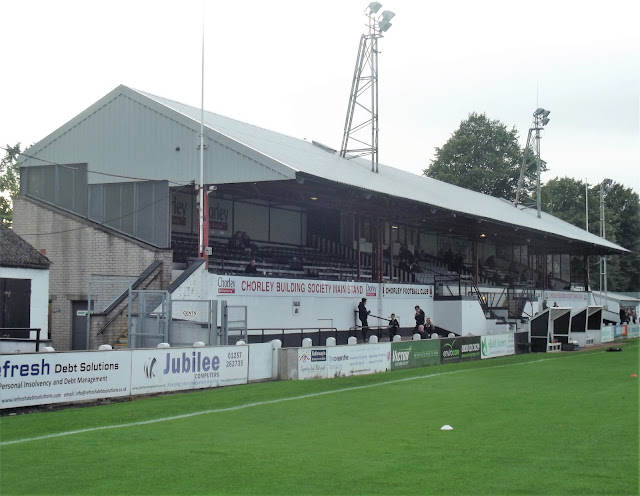 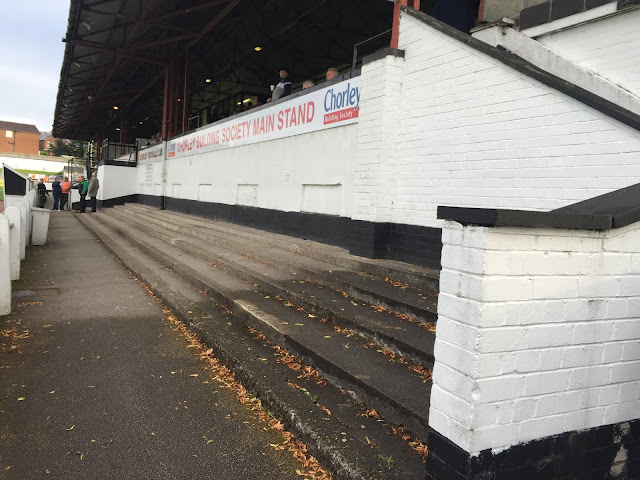 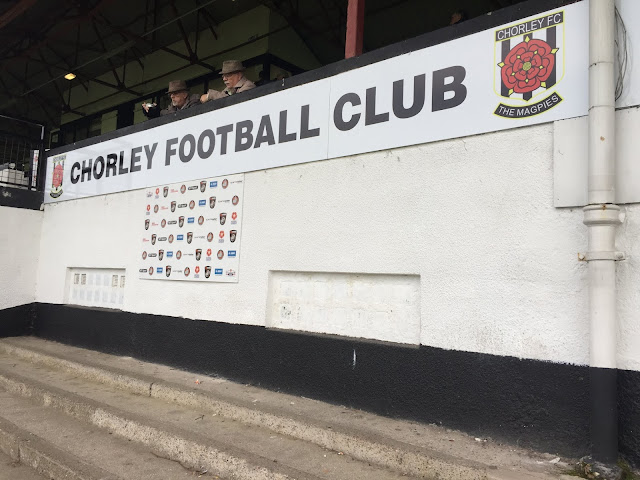 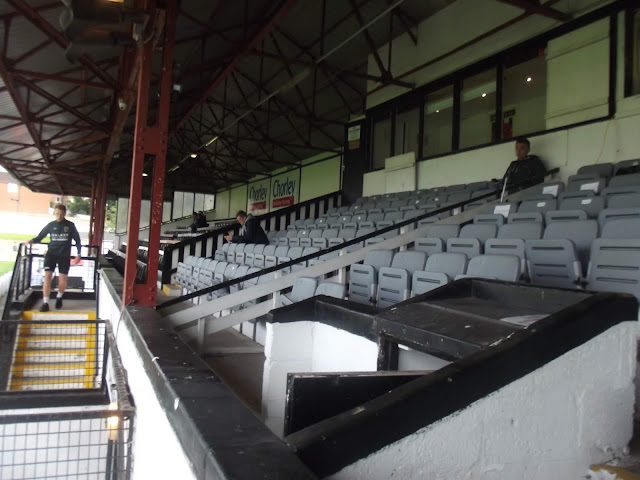 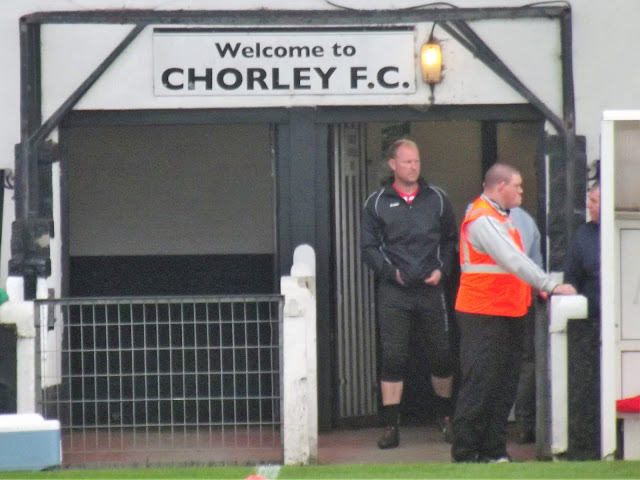 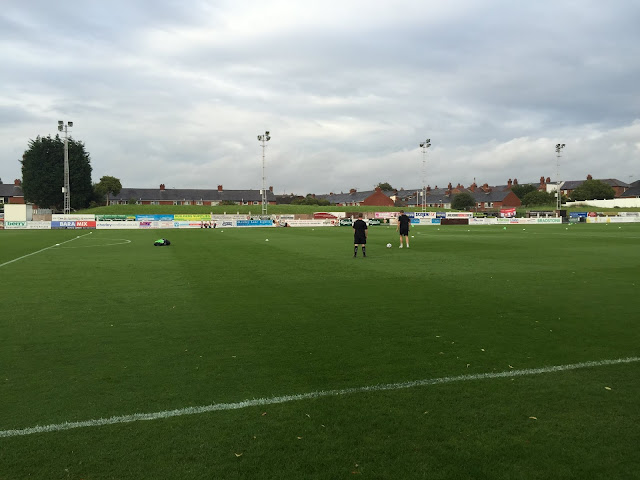 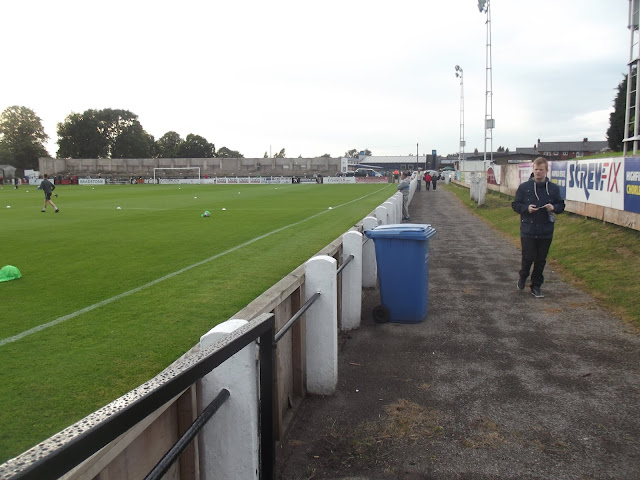 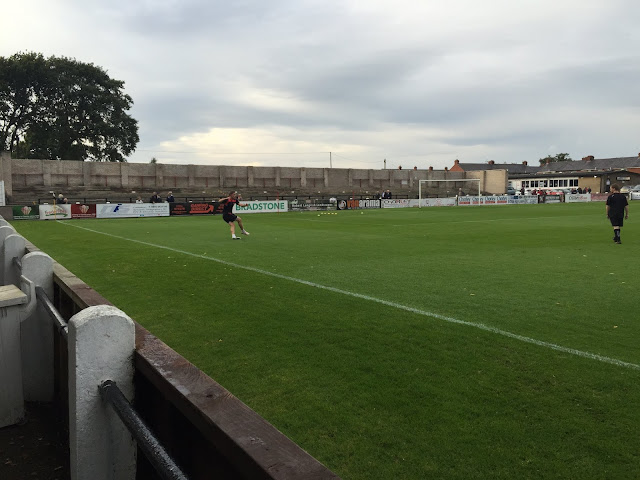 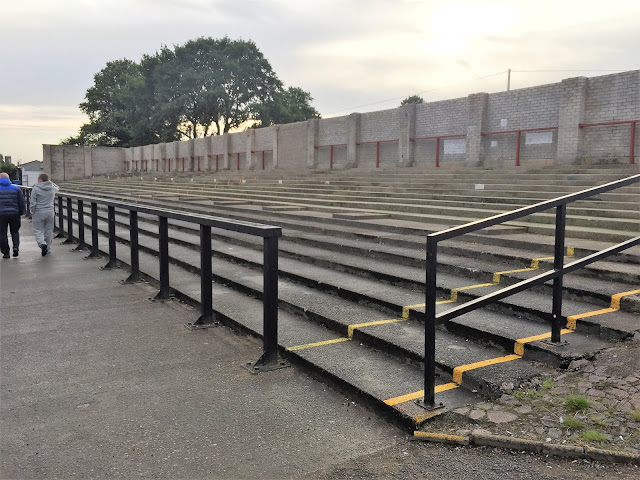 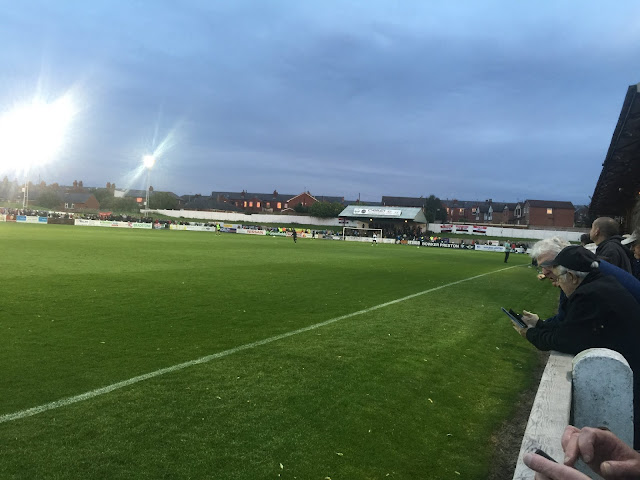 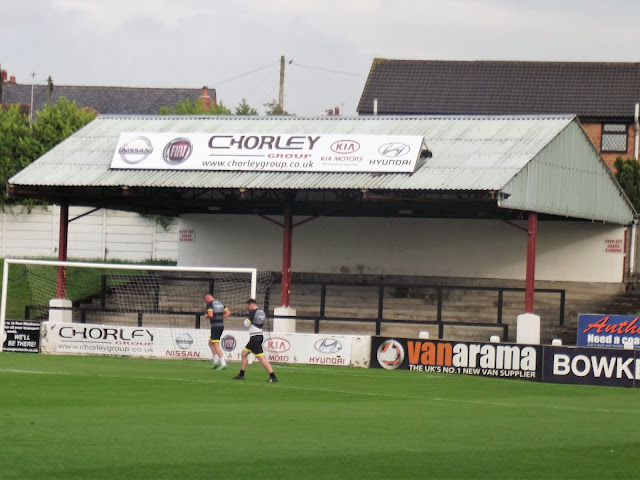 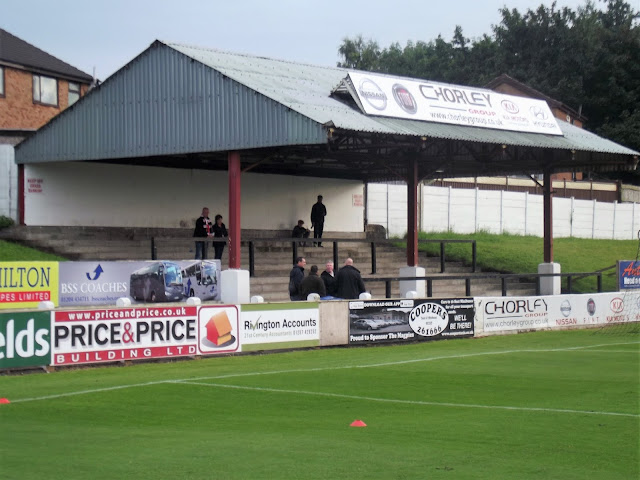