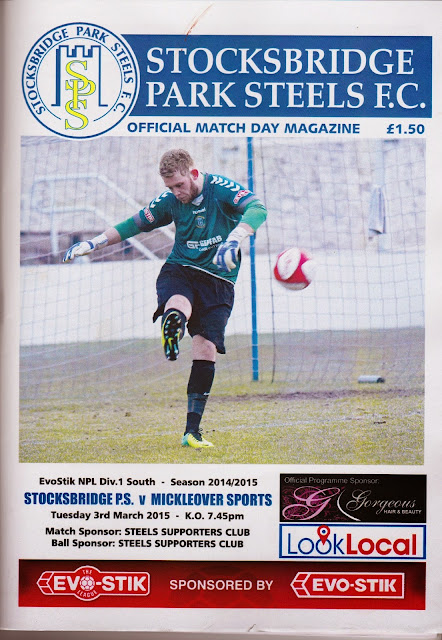 Stocksbridge Park Steels were formed in 1986, following a merger of Stocksbridge Works and Oxley Park FC. Initially starting where the Stocksbridge Works team had left off in NCEL D2 the league was absorbed into the higher Division 1 in 1991. Despite finishing around the halfway mark before the leagues joined together, they were champions of the new style format in 1992. They finished in 16th place in the NCEL Premier in their first season, winning it the following season on goal difference. However, their ground did not meet the standard required to gain promotion and so they had to wait until 1996 to go up after they finished runners up behind Hatfield Main. They stayed in the NPL Division 1 until 2009 when they beat Belper Town in the playoff final. During their time in the NPL Premier, they were always in the bottom half of the table and finally last season they went down after finishing in 23rd place. Despite a disappointing start to this season with them sitting in 19th place, they were at least safe from the 2 relegation spots for the immediate future.

In the FA Cup Stocksbridge had a great run to the FA Cup 4th Round in 2003. However, it was bought down to earth with a crash as they lost 6-0 to Northern League side Shildon, in the process missing out on a plum tie against Notts County. They gained their record win in this competition in 2002 when they thumped Oldham Town 17-1 with Paul Jackson helping himself to 10 goals. They reached the 3rd Round of the FA Trophy in 1999, even taking then Conference side Scarborough to a replay. In the FA Vase, they reached the 4th Round in the 94/95 season, before going out to Eastwood Hanley. They have won a few local trophies - most recently the Sheffield & Hallamshire Senior Cup in 2009. 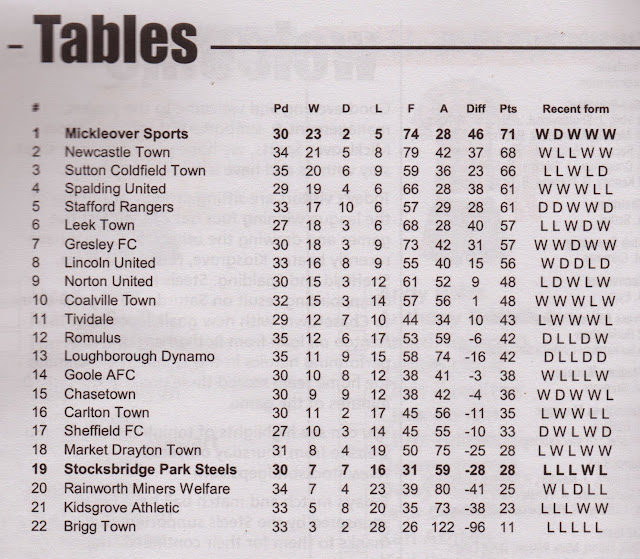 I was looking forward to planning another of my breaks up north on my week off work. I had favoured the North Lincolnshire and North East areas initially but with nothing that took my fancy when I booked my accommodation, I instead opted for the Yorkshire area, initially favouring Liversedge v Worksop Town as it was one I wanted to do for a while, as it was my friend and fellow pub enthusiast David's local team. I drew myself a backup plan in case he was unable to make it however, as he had recently got a new job and might have to work. On the day of the game, I awoke quite late at 9am. Most days I would have turned over and had another hour in bed, but I wanted to get off fairly early. I got up, checked a few things online before having breakfast and a bath before leaving at 10.30. Or at least that was the plan. I had lost my keys and after a 45-minute search, found them in my dressing gown pocket. What a jerk! Anyway, I ended up leaving at 11.15 and after initially deciding to go to Milton Keynes market despite my allotted time being reduced, I then decided against it after encountering slow drivers along the way. This turned out to be a decent decision as there was a road closure which meant a 4-mile diversion to get on the M1, plus 40 miles of slow road while they messed around with roadworks. 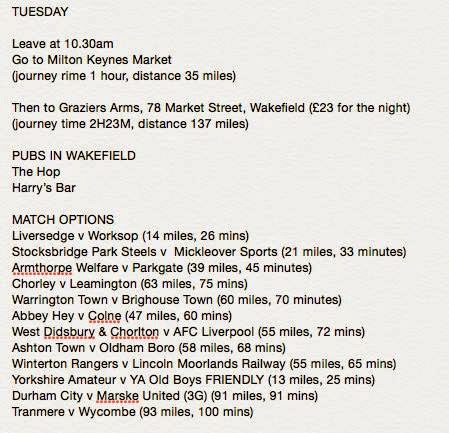 Eventually though, after a toilet stop at Trowell services, I got there at 3pm. My hotel was not ready yet, so I went into town. As the decent pubs were not open I made do with a half at Wetherspoons while I caught up online. After that I went around some shops, getting some pasties and some cakes at Pound Bakery, plus a couple of PS3  games and a new clock radio at Cash Generator. By now a decent pub, The Hop was open, so I stopped by for a pint of Bramley Swiggings before going back to my room for a couple of hours. After testing the clock radio I had bought (it worked fine) and watching the Chase, I went out and got some food. A random place offered pizza, fries and a drink for £3, a right bargain. They were very good too. It was about 6.30 when I set off for my football fix. Originally I had decided on Liversedge, but with various people unable to meet me, I decided upon a change of plan and a trip to Evostik League side Stocksbridge Park Steels, so as to offer a bit of variety. The journey there was good, and I was there by 7pm. I paid a very reasonable £7 entry, plus £1.50 for a programme. I was there a while before kick-off, and as it was cold, I went up to the bar to get a pint. I was pleased when I found it was one of my favourites, Sam Smiths cider, and only £2.70 a pint too. I then caught up on Facebook and took some pictures while waiting for the game to start. The tea bar was good, and through the evening I got myself pie, peas and gravy, as well as a mug of homemade vegetable soup. I also got myself a scarf from the club shop table, seeing as they were only a fiver. 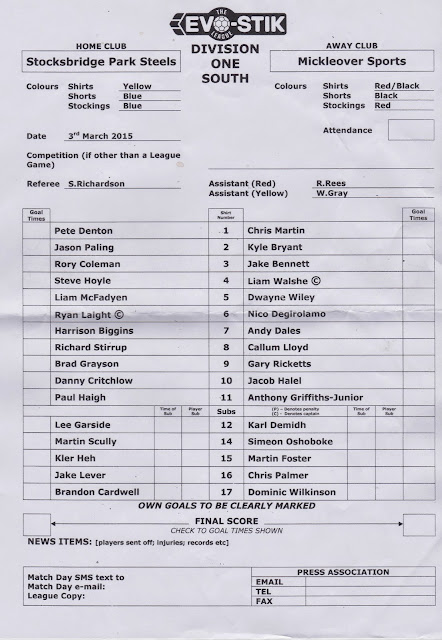 The game was a pretty one-sided affair, with the table-topping visitors easily taking the points. Despite this, however, Stocksbridge Park Steels took the lead on 29 minutes as they enjoyed a decent opening period, opening the scoring through Dan Critchlow. It was all square at the break, with Andrew Dales equalising on 39 minutes. Despite their dominance, it wasn't until the final 20 minutes that this was reflected in the scoreline. Karl Demidh got a brace after coming on as a sub, with Jacob Hazell getting the other. After the game, I made my way back to Wakefield. I was delighted to see that Wycombe had won up at Tranmere, so I listened to the final few minutes of that and the interviews after via BBC Radio Merseyside on my phone. I got back to my hotel at 10.20 and went straight over to Harrys Bar, where I met Eddie, a Grimsby fan that I know. We had a pint there and then a couple back at The Hop. By the time it got to midnight everywhere was closing so we said goodbye before I went and got some chips to complete a thoroughly unhealthy day. A combination of drink and tiredness saw me fall asleep as soon as my head hit the pillow, it had been a good day.
THE GROUND

BRACKEN MOOR (currently known as the Look Local Stadium for sponsorship purposes) is a great looking stadium that is amongst my favourites visited. The covered seated stand holds 450 and has seats that had previously seen use at Sheffield Wednesday's  Hillsborough ground. There are around 3000 terrace spaces, a decent amount of which is covered, mostly behind the near goal. The 4th side of the ground is out of bounds to supporters, due to them sharing with the local cricket team.


The clubhouse is excellent, warm and cosy with a great view of the pitch and showing the Sky games. They serve a wide range of drinks, including Samuel Smiths beer and cider which is very nice. The tea bar is good as well and has lots of space inside to sit down inside to enjoy your food. There is also a club shop table with old programmes and a range of club merchandise at wallet-friendly prices. 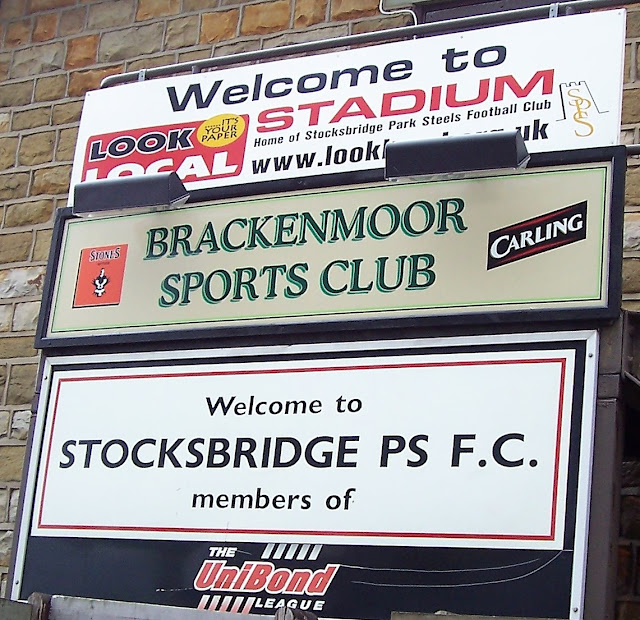 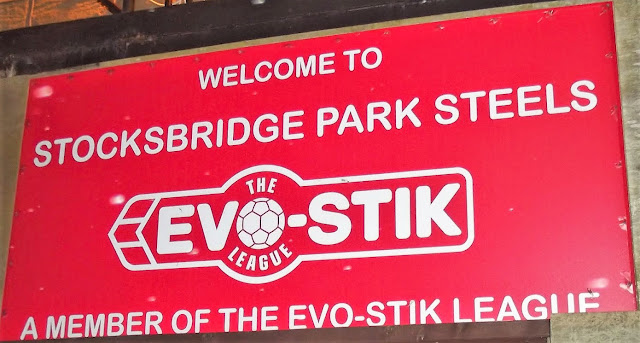 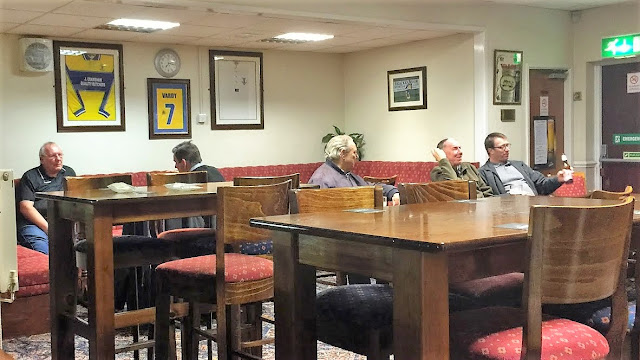 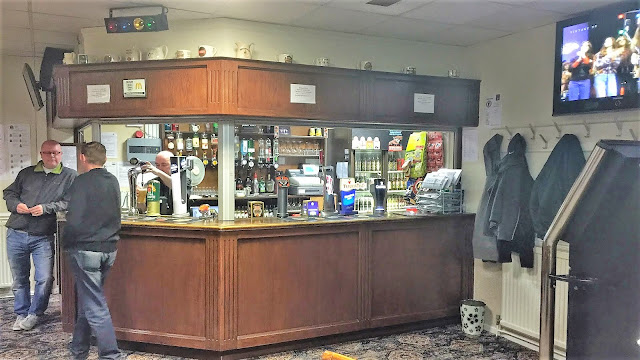 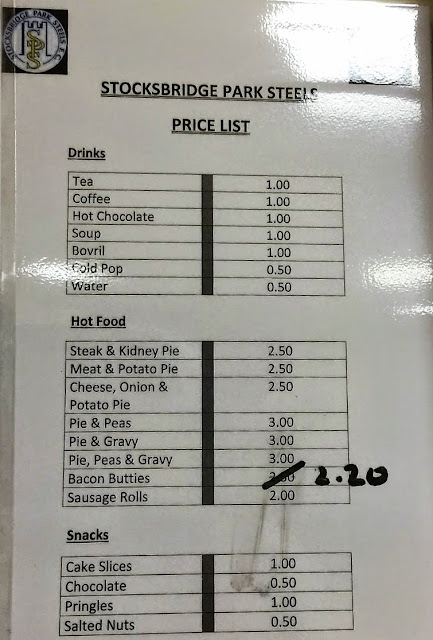 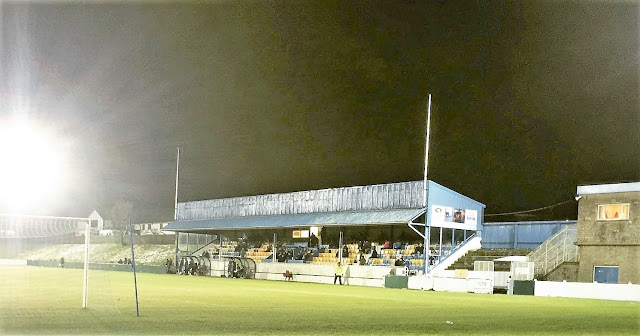 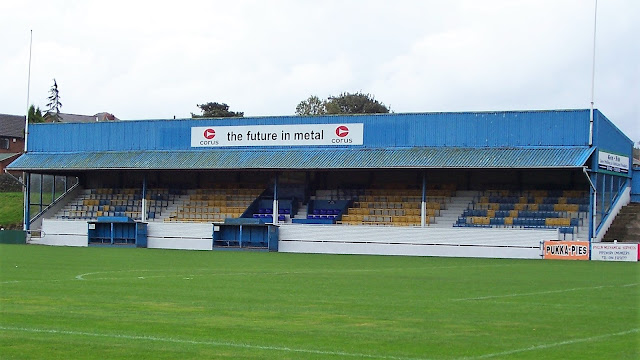 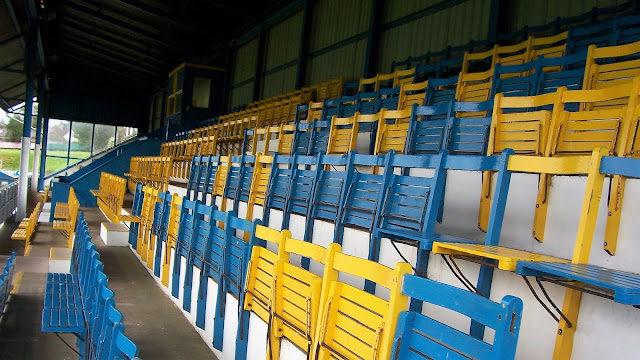 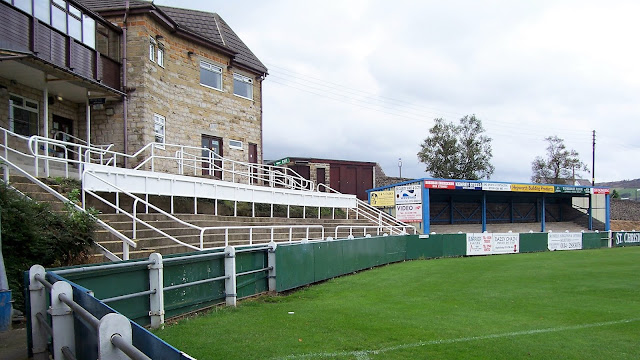 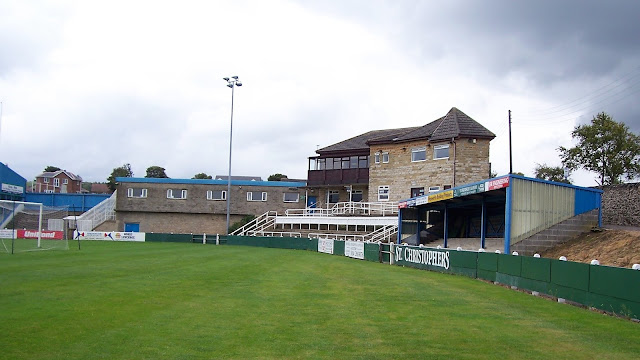 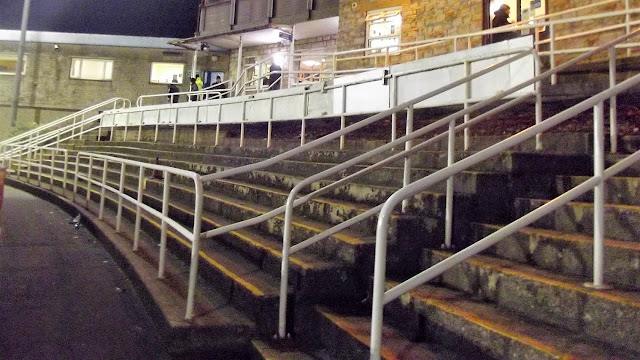 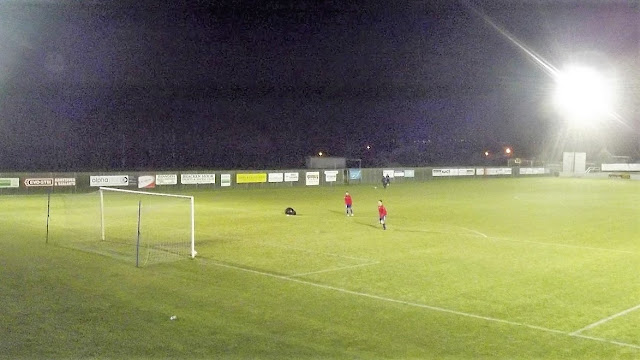 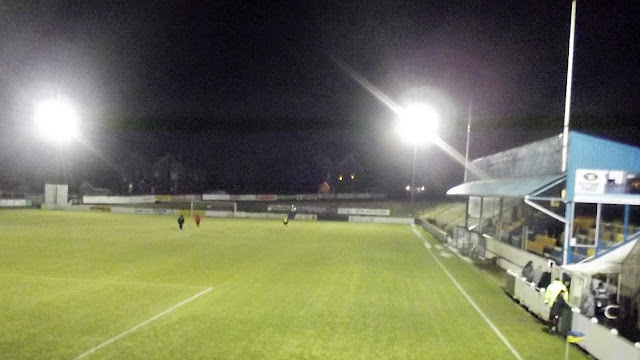 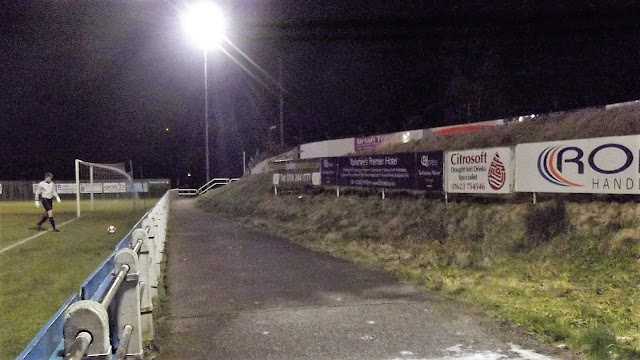