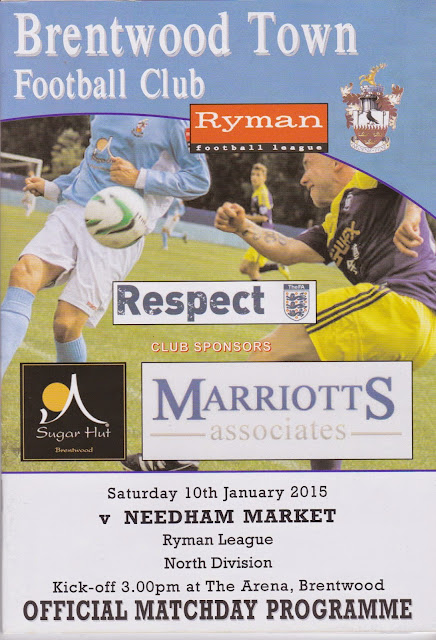 BRENTWOOD TOWN FC has been known under several names under their history, having been formed in 1954 under the name Manor Athletic. They have also been known as Brentwood Athletic and plain old Brentwood before settling on their current moniker. They started life in the Essex Olympian League and after a brief spell in the Southern League, they joined the Essex Senior League in 1974. They have spent most of their history in this competition with varying degrees of success. In 2007 they won the league for the second time and took a promotion to the Isthmian D1 North. Since going up they have always finished in the top half. They had their best ever finish of 5th in 2011 and despite a 19th placed finish last season they were in 4th place before the game, though they slipped down to 5th after tonight's loss.

The club suffered a 10-1 defeat to Aylesbury United in the FA Cup Preliminary Round in 2001, this was a far cry from the late 60's when they reached the proper rounds of the FA Cup 2 seasons in succession. Though they lost 10-1 to Southend in the 2nd Round in 1968, they reached the 3rd Round the following season before narrowly losing 1-0 to Northampton Town. They had to beat football league side Reading in the 1st Round to get there, so it was a really good season for them. They reached the FA Vase 3rd Round in 1995 before going out to Thamesmead while in the FA Trophy their best progress was to the 1st Round in 1969 when they took Hereford United to a replay. 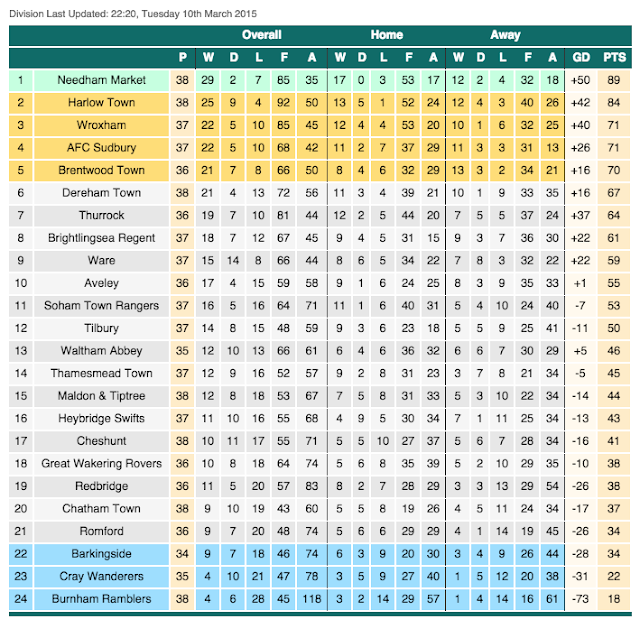 After a very busy week off, I was back at work, but still keen to do a groundhop. I was glad to have Anwar back in the passenger seat - firstly as I had not seen him for ages and secondly to help out with travel costs. I had decided in advance that I was going to have a sober week, what with my body taking a hammering last week, and with that in mind it was going to be a fairly short trip too. I presented a list of around 8 games to Anwar and we both chose Brentwood between us, though I was tempted by Highworth Town as well
After all the car trouble I had when I was having on the Welsh Groundhop, the start of the week was an expensive one for me. On Monday a new tyre cost me £57 and then on the Tuesday new pads and discs for my brakes cost me £262. There was also a problem with the gearbox making a clicking noise, so I booked that in for next Tuesday. Elsewhere the day was spent catching up with my blog and going down town with my Dad. I left home at 4.50 after my car had been sorted, meeting Anwar at 5.20 in Aylesbury. On the way to the game we discussed our future plans, and after our fellow friend Lewis had agreed to get me a young adult ticket for Luton, I'd agreed to drive to the game in return. It meant that I'd miss out on a week away up north, but after a pricey weekend in Scotland before, my body and wallet would be glad of the rest. 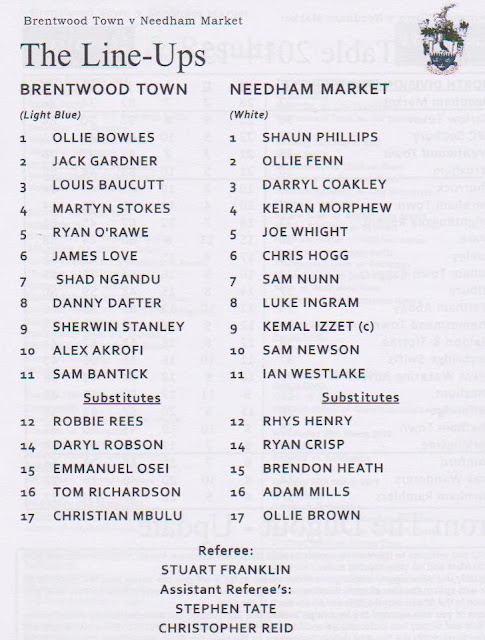 I thought that Brentwood would be a pain to get to what with the M25 but the Sat Nav confirmed an arrival time of just after 6.30. The M25 was well behaved for once and we got there as scheduled. We didn't see anything on the way and hungry we walked 15 minutes to a parade of shops we had found on Google. The Chinese was closed but luckily the Indian was open and I got curry, rice and naan for £5 It took around 20 minutes to come and when it did, it was worth it. It was delicious and was a good portion size for the price. So if you are ever stuck for food in Brentwood, then the Basmati comes highly recommended. From then on it was a 15-minute walk back to the ground, with us getting there at 7.25. We paid £8 to get in which is the norm for this league. We had to wait a few minutes for our change as they didn't have any. Getting into the ground, it was deserted with only a few in. Brentwood's vocal support was provided by 3 youngsters who made me laugh with their ribbing of the Needham Market players. 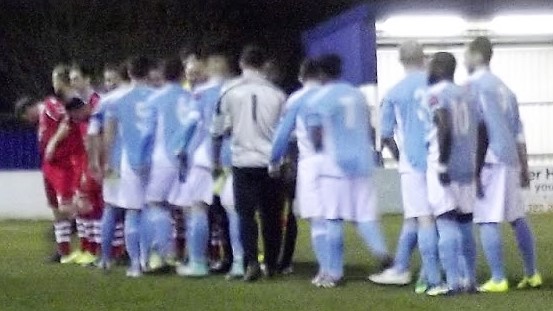 The first half was quite dull with some good play but little end product. Both keepers made good saves though but it was no surprise that it was scoreless at the break. The visitors opened the scoring on 52 minutes, and what a goal it was. Luke Ingram's 25-yard volley flew in the top right-hand corner and was one of the best goals I have seen all season. They extended their lead on 68 minutes when Ingram got his second with another neat finish. It was a goalkeeping error that led to the third goal as the home custodian fumbled Sam Newson's shot into his own net on 81 minutes. Brentwood's got one back right at the death through Sherwin Stanley and they deserved that for their efforts on the night. In the end though, the quality of Needham Market's ex-football league players shone through, and it's their know how that sees them top of the league. It was getting quite chilly towards the end of the game as we were seeing the back end of Winter. We left the ground just after 9.40 to make the journey home. It was a good journey home making good time. Maybe too quick though as I got flashed by a speed camera doing 70mph in a 50 limit. There were no roadworks present as claimed, but I doubt that will stop them trying to scam me, and I guess I will just have to keep my fingers crossed. In case I had enjoyed the evening and dropped Anwar off at 10.40. Little after 20 minutes later I was back home and after watching TV in bed, I went to sleep just after midnight.


BRENTWOOD CENTRE ARENA is a pretty standard ground for the Isthmian Division 1 North. There is an old seated stand, holding around 250. There is further cover behind the goal in a much more modern stand, probably holding around 350. The rest of the ground is open. There was a tea bar and clubhouse, but I didn't use them. As mentioned above, local Indian takeaway Basmati is excellent and is only 15 minutes walk away. 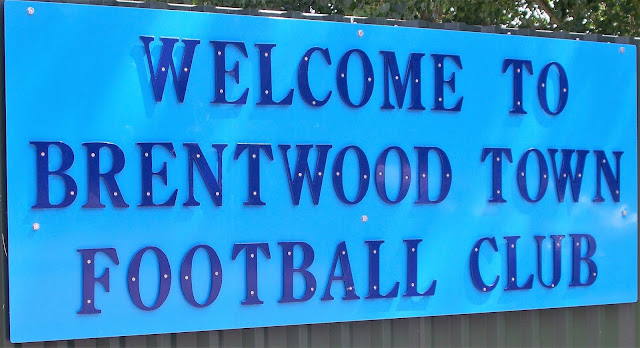 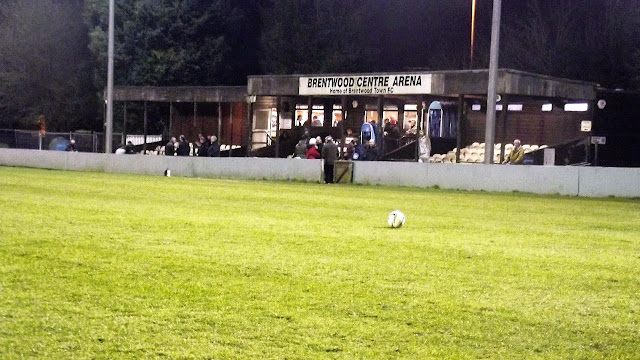 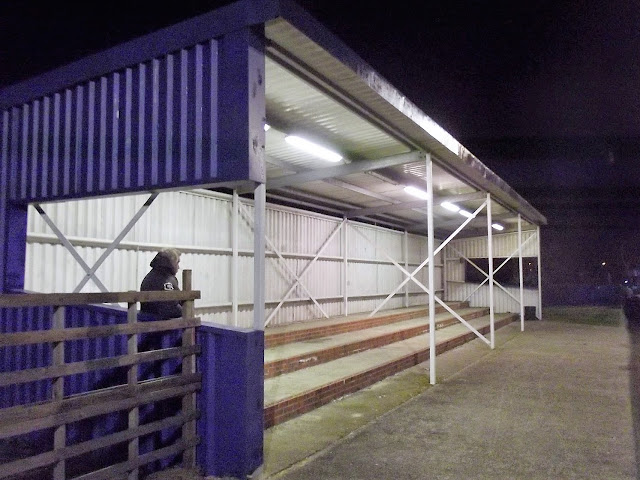 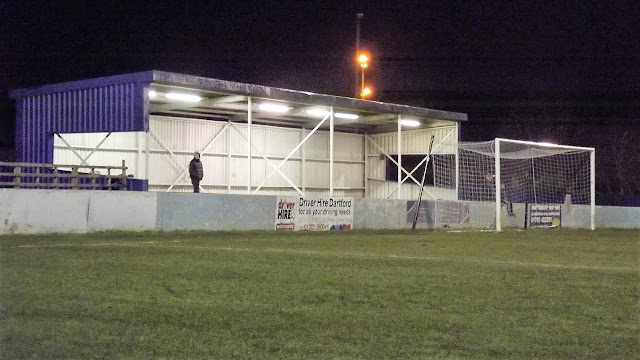 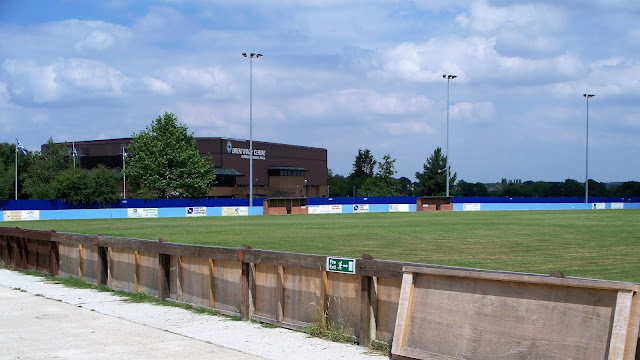 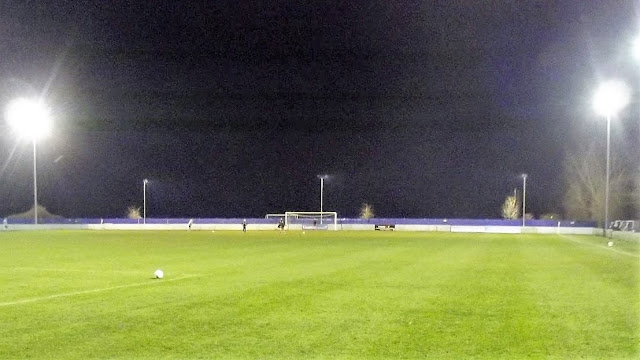 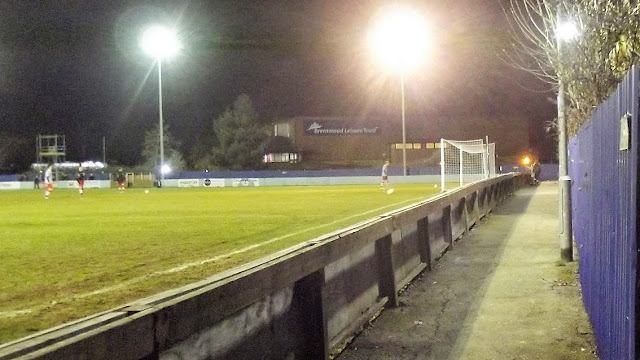