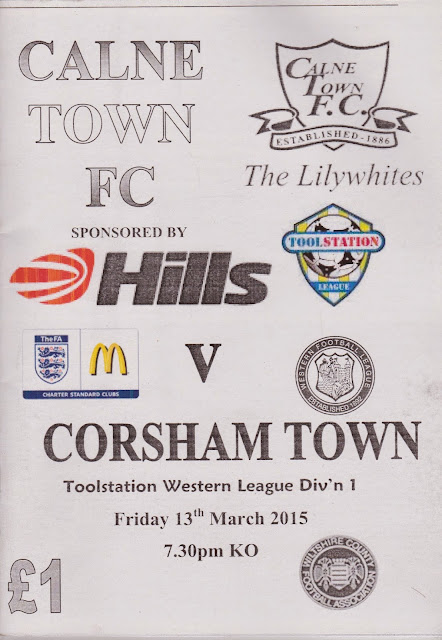 CALNE TOWN were established in 1886, making them one of Wiltshire's oldest clubs. After playing in local leagues for much of their history, they made the step up to the Western League in 1986 joining at Division 1 level. Despite a 19th placed finish in their first season things soon improved and after a series of respectable finishes they were promoted to the Premier Division after finishing as runners up to Odd Down. They stayed in the higher division until 1999 when they were relegated after finishing bottom of the table. They had to wait 5 years to return but in their first season back they finished 5th which to date is their best ever finish in the Western League (though strictly speaking 7th place in 1997 was higher as it was a step higher in the Pyramid at the time) Their second spell in the Premier Division ended in 2010 and despite a 4th place finish of 4th in 2012, they have not looked like returning to the Premier Division. At the time of the game, they were sat in 14th place, with their opponents in 7th.

In the FA Cup, they reached the 3rd Qualifying Round in 1997 before a defeat in a replay to Basingstoke Town. The Hampshire side went on to beat my team Wycombe Wanderers before finally losing to Northampton Town on penalties. Their best run in the FA Vase was to the 3rd Round in 2006 before they lost 4-1 to fellow Western League side Slimbridge. They have won the Wiltshire Senior Cup on 4 occasions, most recently in 2012 when they defeated Bemerton Heath Harlequins in the final. 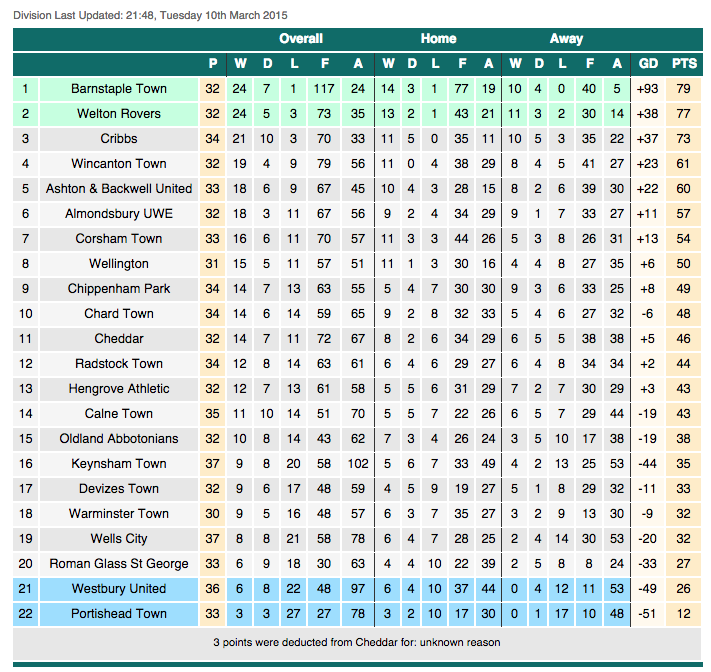 Initially, on this Friday, I was planning to go up to Daisy Hill v Atherton Colleries, a local derby between 2 teams that play near Bolton. It would be a hell of a long way, especially on my own, but I'd decided to go for it as I knew a few people from the visitors. That was until I opened the Non-League Paper's list of fixtures and saw that Calne Town were at home. This would save me around 200 miles on the round trip, which given that I had been going through an expensive time. Another potential bonus was that Anwar said he was considering coming, which would cut the costs down even more. The Western League and its clubs were just learning about the benefits of Friday night football. Around a month or so ago I had been to see Keynsham Town on a Friday night and they had got treble their average attendance for the game as groundhoppers and football fans flocked to see the game and I was hoping that other clubs would take note and provide me with some entertainment after my week at work. On the day of the game, I worked until 12.30 on what was a fairly decent day for a Friday. Before leaving I bought a few bits for the weekend. I got home, had lunch and a bath and spent the afternoon relaxing until it was time to pick up Anwar. I got to Aylesbury at 5 and for once he was there waiting for me. It was a fairly decent journey down, despite an accident on the M4 meaning that we had to take another route. After a couple of hours though we were at the ground having taken a route that was more suited to a cross country rally than a road trip.  We paid £5 to get in plus £1 for a programme before going back out to visit the bar. I was glad to try a new cider in West Country gold and the first pint of the week went down well. After that, we went into the ground and I got myself a couple of sausage rolls for a quid plus a scarf for a fiver. Later I got a cup of OXO  for 80p. While I was browsing Facebook I noticed that Daisy Hill v Atherton Colleries off, so I was glad I went to this game instead of having a wasted journey. 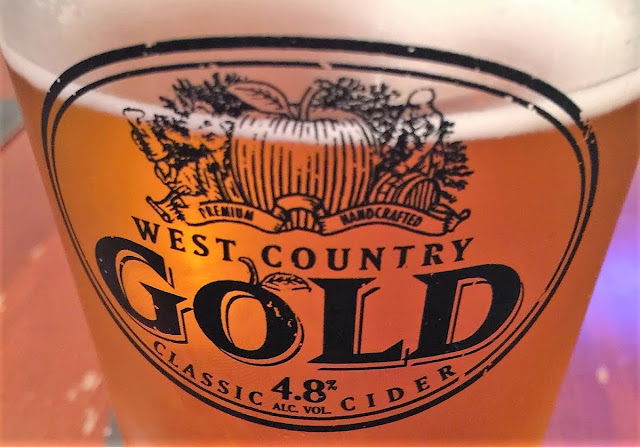 The opening stages were dominated by Corsham and they opened the scoring with the aid of a deflection after 10 minutes.  The game was not the best and chances were at a premium with the visitors still leading at the break.
The second half was much the same but Calne started to play a bit. They got their reward on  60 minutes when a shot was bundled in from close range after the keeper could only parry the initial effort. The Corsham number 5 got his marching orders on 68 minutes when he bought down the last man, thus denying a goalscoring opportunity. This gave them a real advantage and they had a dominant spell which culminated in them taking the lead on 79 minutes. A great touch set the striker in on goal and he finished with aplomb from the edge of the 6-yard box. They had chances to extend their victory but in the end, it stayed at 2-1. So after another decent night of football, I was hungry. Paul, who I met last week in Wales and also at tonight's game recommended a place called Mario's. I didn't want to spend much so I looked for the best value thing on the menu. This was Scampi and Chips and it was only £3.50. Though it was nothing amazing I enjoyed it and it was a generous portion for the price. After that, it was time to drive home. We made good time with me dropping Anwar off at 11.40 and getting home myself just after midnight. I caught up with goings on Internet wise before watching TV in bed and going to sleep around 2am. 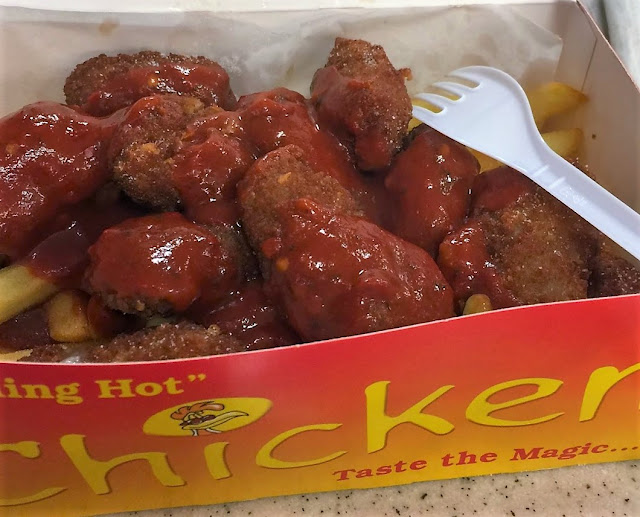 BREMHILL VIEW is a decent ground for step 6. There is only one covered area with seating and a few standing spaces for around 150. The rest of the ground is open. I visited the ground in the daytime some ten years previously, hence the old version of the stand. The tea bar is pretty basic but the clubhouse is brilliant with a wide choice of drinks. Scarves and badges are available from the tea bar for reasonable prices. If you want a wider range there are a few choices for food and drink nearby. 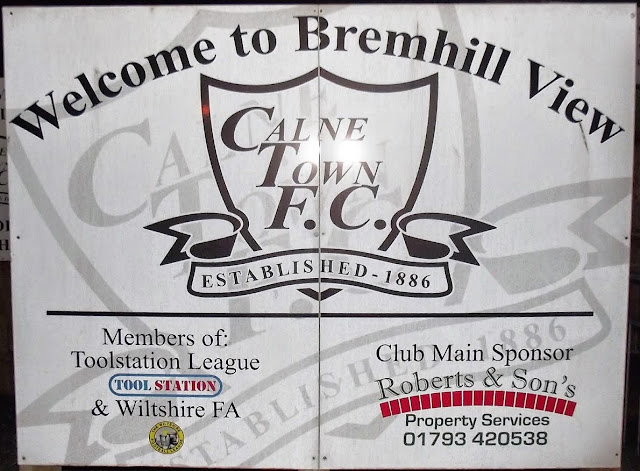 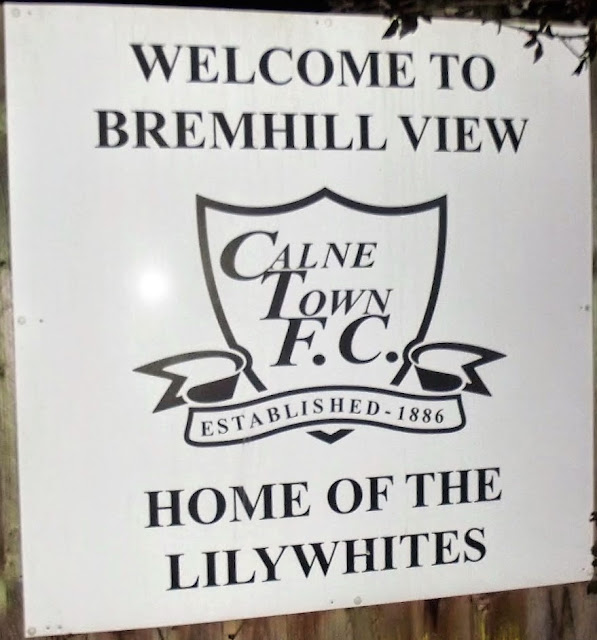 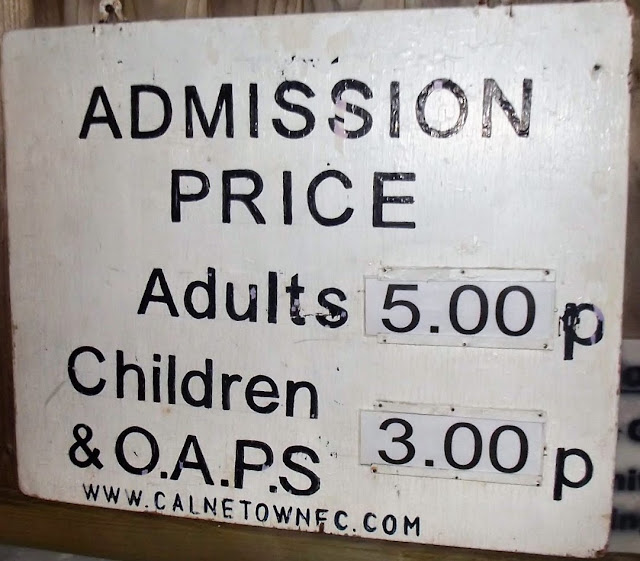 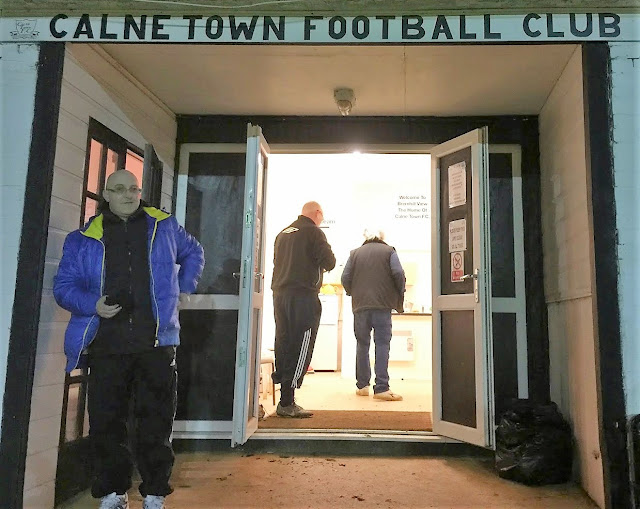 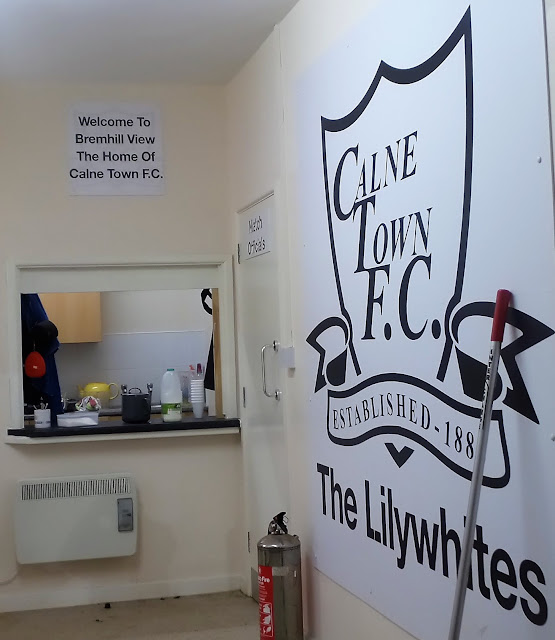 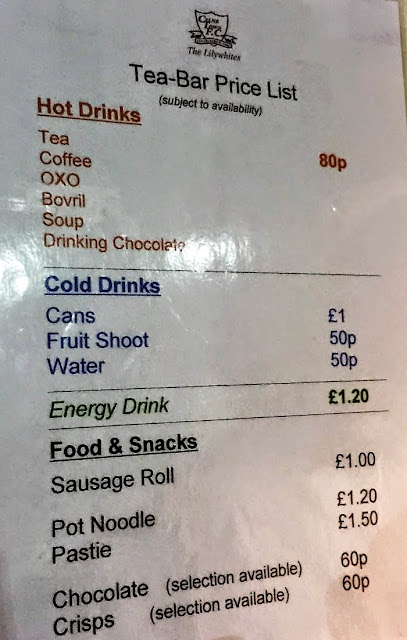 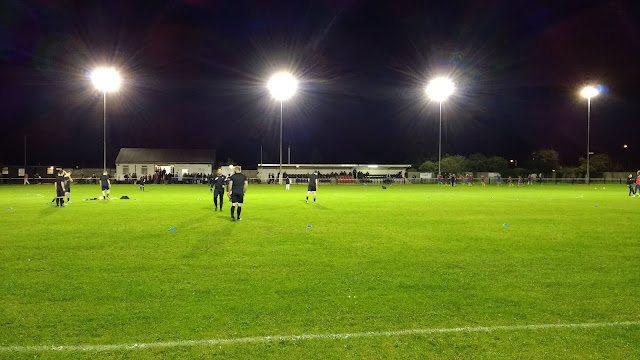 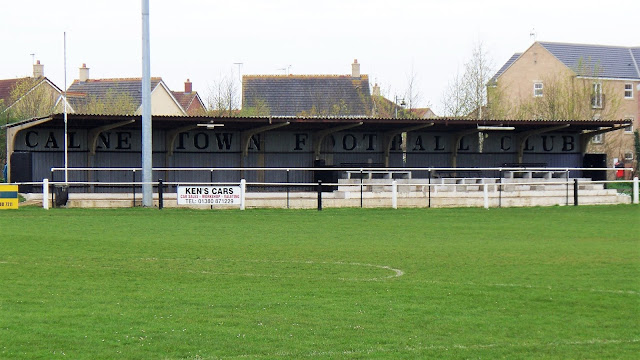 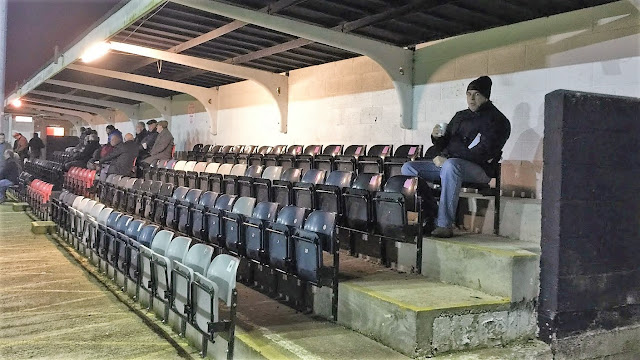 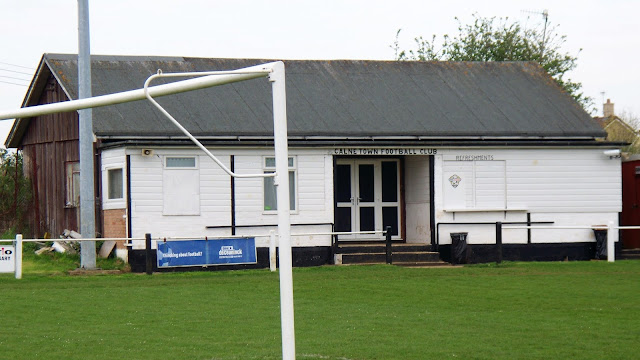 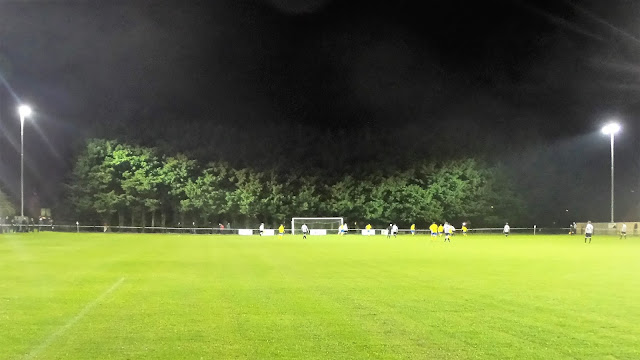 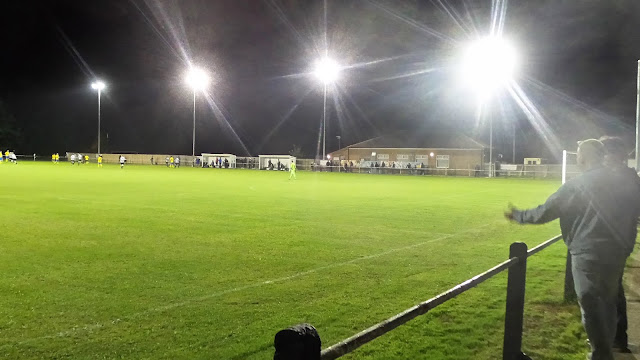 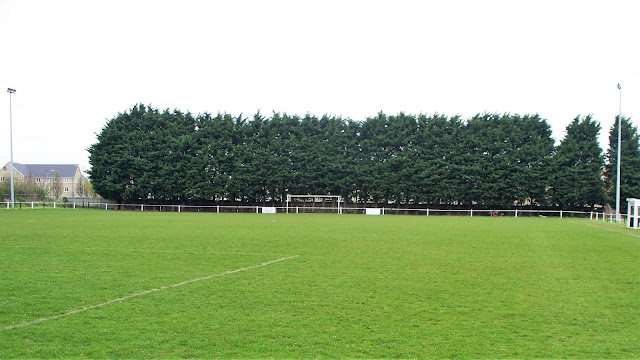 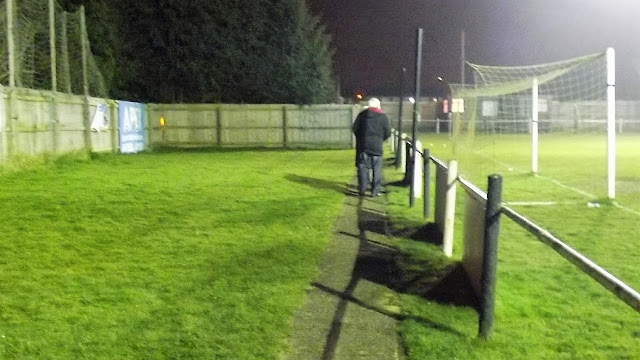