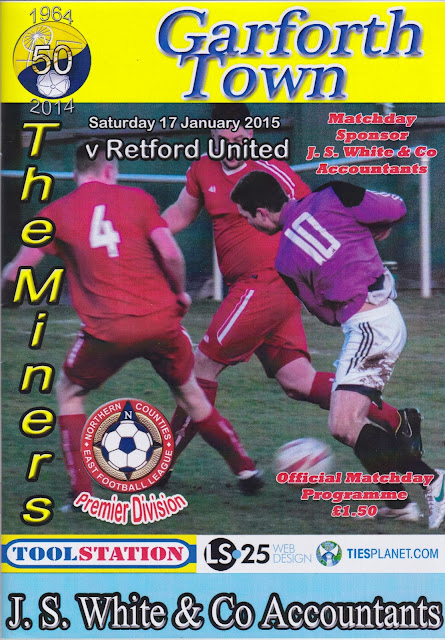 GARFORTH TOWN FC was formed in 1964, and so this was their half-centenary season.  They were known as Miners Arms (after a local pub) and then Garforth Miners before adopting their present monicker in 1985. The club were founder members of the NCEL in 1982 and remained there until 2006 when they were promoted to the NPL. They were generally successful but after a best ever 5th placed finish in 2012, they finished rock bottom the following season. This meant relegation back to the NCEL and in their first season back they finished 14th. This season saw little change, with them sitting 13th at the start of play.

They reached the Quarter Final of the FA Vase in the 1986-87 season, eventually losing to London based side Collier Row. As for the FA Cup, they reached the 2nd Qualifying Round on 3 occasions. Famous players to represent the club include former Manchester United player Lee Sharp, and amazingly Socrates, captain of the epic 1982 Brazil team. The latter came about due to former owner Simon Clifford's Brazillian Soccer schools and certainly bought much attention to the club from the national media. 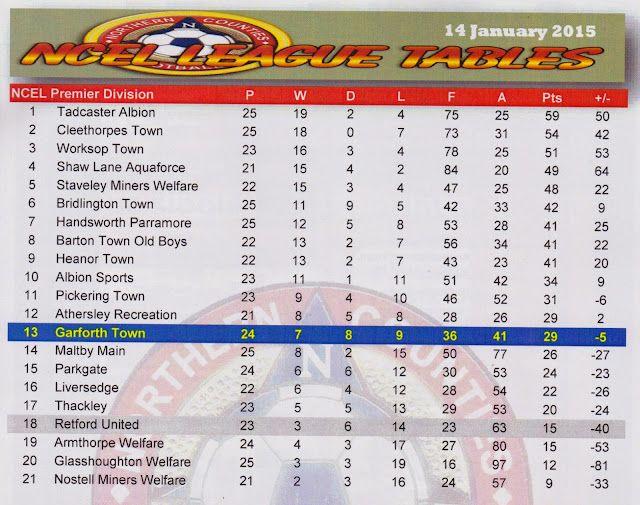 For this Saturday I would be back in my happy hunting ground of the North for a game. I had agreed around a week ago that I would drop fellow groundhopper Anwar and our mutual friend Howsy off at Leeds United as they had not seen a game there yet. I thought it would be a simple choice of selecting the best game and day out for me, and with the weather not looking horrendous, I was fully expecting to be at Ossett Town v Bamber Bridge, a game I had selected mainly because of the nearby Beer Huis off licence and micropub, as well as it being a decent ground. But it transpired as the week rolled on, that things might not be so simple. The weather forecast was looking ominous and so for that reason, I drew up a list of 49 possibilities, even including a revisit to Gigg Lane for Bury against my own team Wycombe. That took 2 hours of my Friday night when I should have been heading west for Slimbridge v Bristol Manor Farm. But unlike potential target Gresley on Tuesday, who didn’t communicate, they were excellent at keeping fans in the loop, even Tweeting me personally to make sure I didn’t have a wasted journey. That will push them a bit closer to the top of the list when it comes to deciding what game to attend. So that evening was spent having a few drinks instead, but I didn’t go too mad as I knew I had to be driving in the morning. It was a fairly quiet night, even so, it was a blow to my new year's resolution of trying to be more healthy. On the day of the game, I woke up fairly early, just before 7am. I watched some Youtube videos and checked out if there was any early news of pitch inspections before having a bath, getting dressed and leaving home at 8.30. 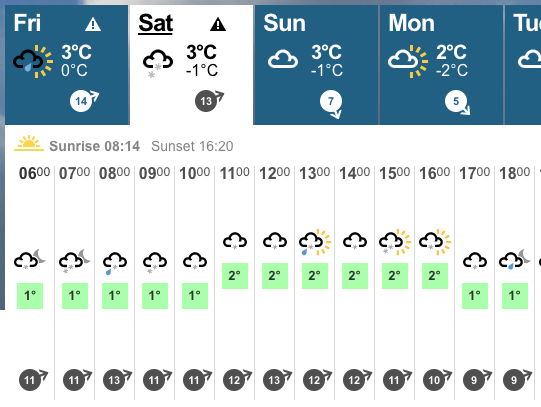 I got to Anwar's just before 9 but had to wait 10 minutes for him. We then went to get Howzy, more waiting but by 9.25 we were away and after a good journey, I dropped the lads at Leeds at 12.15. I already knew that Ossett was off, thanks to them tweeting me and I had Anwar check my second choice at Pontefract. Thankfully it was on, and so I made my way over there, arriving 20 minutes later. I got to my target pub, the Robin Hood just before it opened at 1 and had two halves, sampling Lily The Pink and Scrumpy Wasp ciders. Though when casually checking Twitter, I was horrified to find out that the referee had called the game off, despite it looking fine to me. Third choice at Chadderton had already bitten the dust, as had the 5th choice at Eccleshill. I had decided to put Colne aside as it had a nice micro pub which I could save for when I had more time. So down the list I went, Garforth was next and luckily that was on. I had to jog back to the ground first though, and I was slightly worried that everyone might have gone home and locked my car in the car park as it had a couple of gates. Luckily they hadn’t and so I drove the short distance to the other side of Leeds for my alternative game. 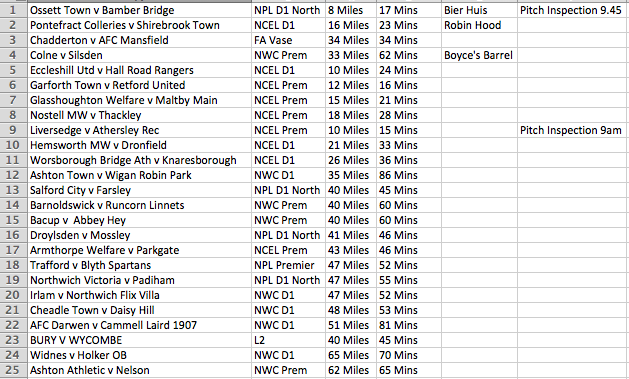 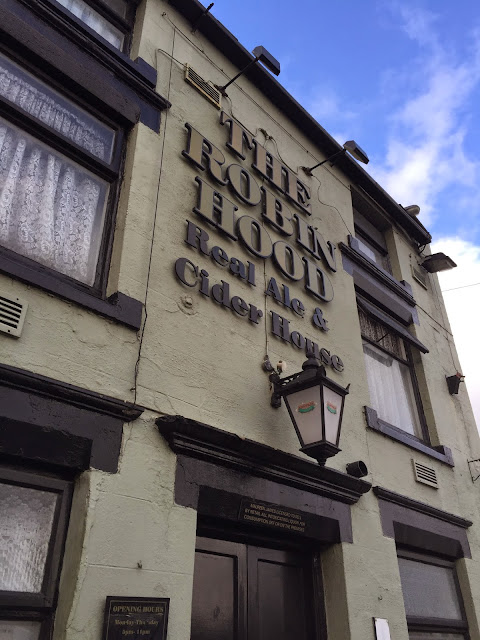 I got to Garforth at 2.10 and went in the bar, as the turnstiles were not yet open, watching the BT Sports match which was Grimsby v Barnet. I was delighted for my Mariners pals that Grimsby were 3-1 up and grateful to Garforth for giving me a game. I got a programme and a golden goal ticket to help them out. While I was watching the TV game, I also had a look at my programme. At £1.50 it represented excellent value for money, with lots of reading and very professionally printed. Something like this is what I am used to paying a quid more for at a higher level. At 2.40, I decided to brave the cold, going out and paying £5 to get into the ground. I had planned on eating lunch in Pontefract, but thanks to the referee’s intervention with the earlier game I had to rush off and so by now was pretty hungry. I ordered a Balti Pie which was pretty mediocre, but at least it came with the all-important mushy peas. I’ve had better, but at least it was good value at £2.50. I then went to choose my place to watch the start of the game, and opted for the top row of the striking looking stand, but with it being high up and with its strange roof arrangement it was freezing up there and so I walked around the ground, standing on the far side for most of the game. 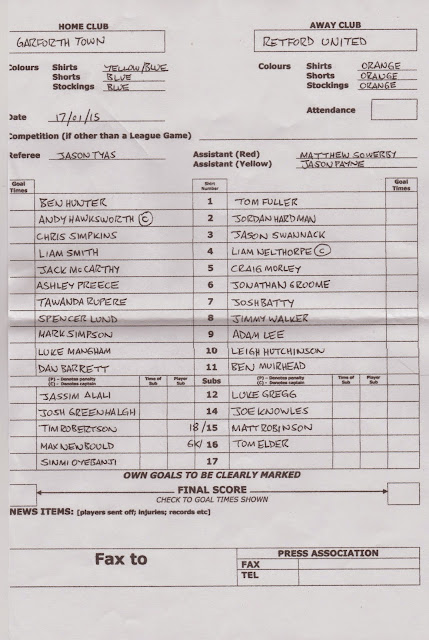 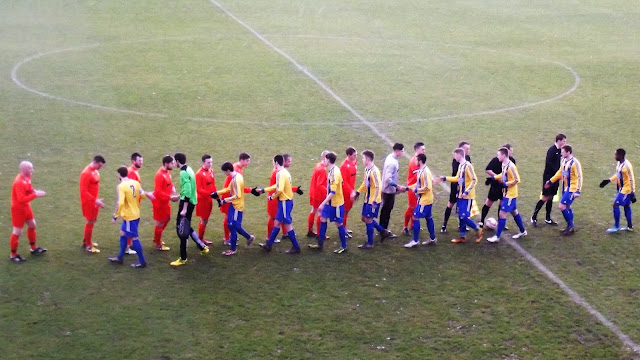 It was a highly comprehensive and professional performance that saw mid-table Garforth romp to a 6-1 win over relegation-threatened Retford. The scoring was opened when Luke Mangan’s looping header from a cross past Retford keeper. Tawanda Rupere doubled the lead on 25 minutes when his low drive went in from 20 yards out. 10 minutes later it was 3 as Mark Simpson rounded the keeper and finished from close range. Just after the hour mark, Dan Burrett’s curling shot made it 4-0. It was 5-0 through Mark Simpson on 71 minutes and although Retford got a consolation through Josh Batty’s header. The 5 goal margin was restored just before the end as Jassim Alali’s excellent run ended with his shot from just inside the area going in off the post. I had enjoyed my day and was glad that I got a game in, but now it was time to resume my designated driver duties and pick up the lads. It was only quick 15-minute journey, but due to me being unable to contact either of them due to the mobile phone network being unable to cope with the level of calls, I had to wait a further 20 minutes to meet up. 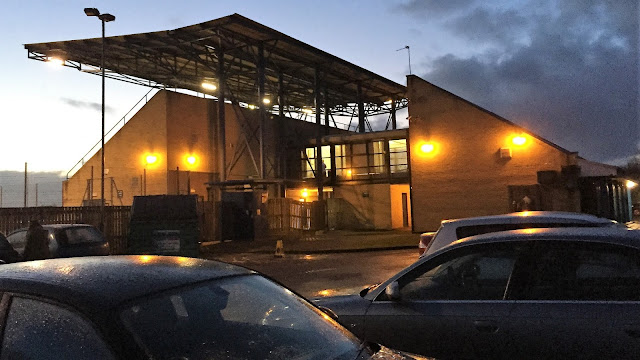 Having been denied the chance to go to the offy that I had wanted to due to the Ossett Town game being called off, I spent the time seeing how many miles going back via Ossett would take. I also wanted some food and to get fuel, and the difference was not much, mileage wise. Eventually, we were on our way. I found the shop and I spent just shy of a tenner on 4 new ciders that I had not had before. I also got some chips, plus stuck £20 of diesel in my car for the journey home. We left just after 6. It always feels a lot slower on the way home as you do not have the match to look forward to. The pathetic 40 miles or so of a needless 50MPH limit through the roadworks did not help, but we filled the time listening to various football phone-ins, but the signal was not great. I dropped both Anwar and Howzy in Aylesbury just after 9pm. I got home myself at 9.30, checking the internet while drinking orange squash until MOTD came on. I was surprised at how many matches survived the weather, I think my top choices were one of the few to bite the dust. For my favourite show of the week, I had one of my ciders, a local one to the area, being from Huddersfield and very good it was too. I went to bed at midnight after the footy had finished. The next day when I had a bottle of Perry whilst typing my blog for this game, I was amused to see that I had travelled nearly 200 miles to buy a drink that was made 15 minutes from my home. It wasn’t made with the same care and attention as the one I enjoyed last night, being commercially made by some Asian company. Even so, it was very nice, and I might well pop down and get a case if they offer such a facility.

WHEATLEY PARK is a modern and smart looking ground. The main stand is the focal point, and it looks marvellous with a striking roof design and connecting tunnel in mid-air to the hospitality areas. Sadly it is style over substance, as with no side panels you are afforded little protection from the chilly wind and rain. There is also a small covered terrace behind one goal, but apart from that, it is all open. The bar provides a warm haven from the elements and shows all the televised games, although with nothing special on the drinks front. The only hot food is pie and peas from the tea bar, but at least it is good value. Club souvenirs are available from the bar. There is nothing that I saw near the ground, but with such a warm and friendly welcome at the club, don’t let that put you off as it’s a great club to visit. 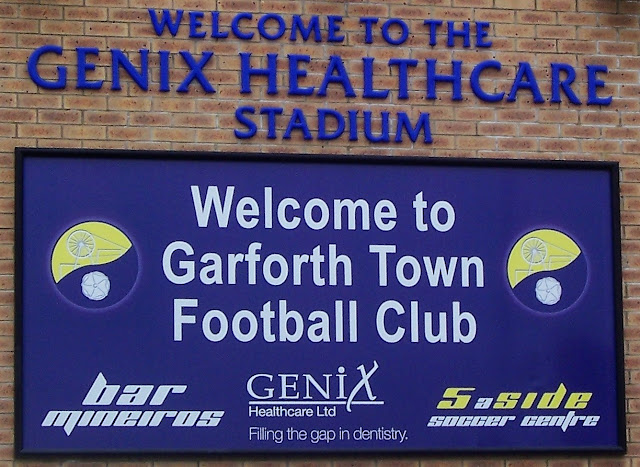 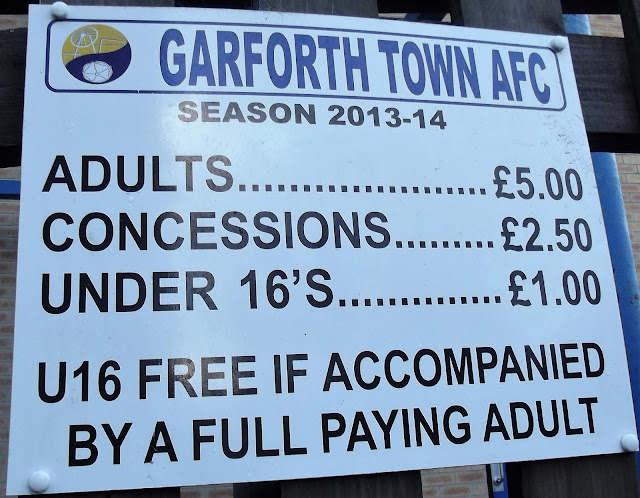 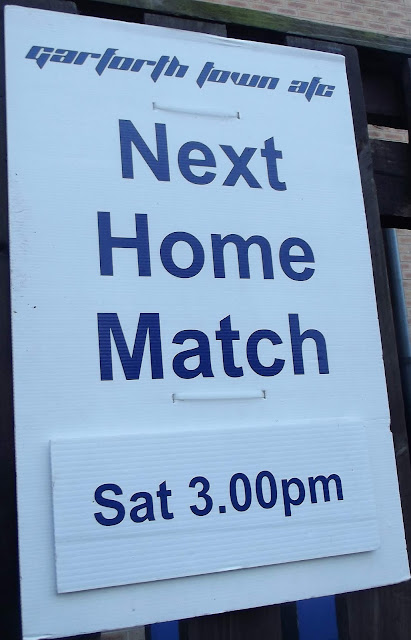 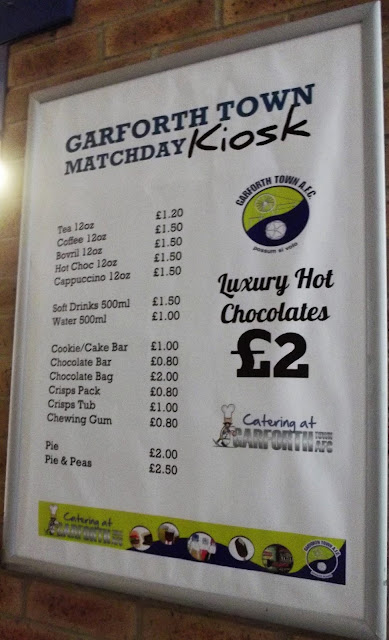 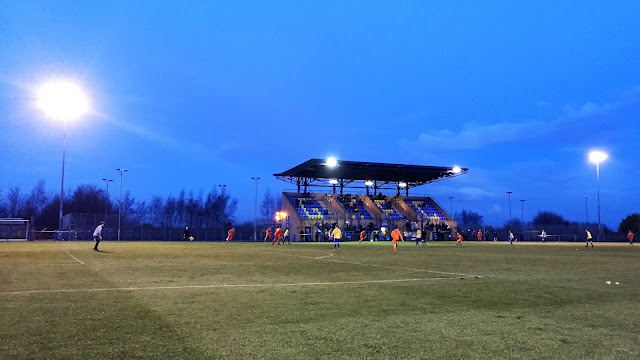 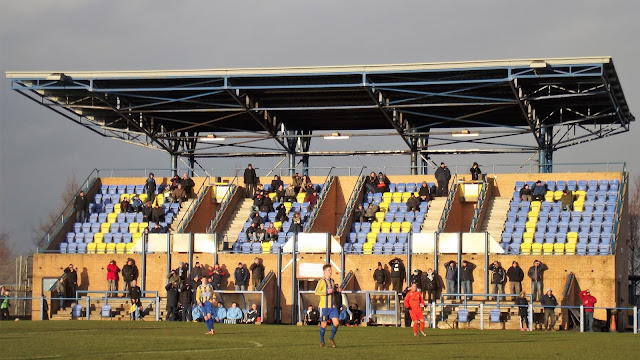 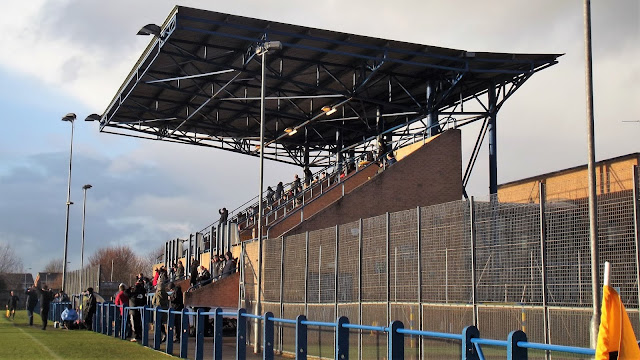 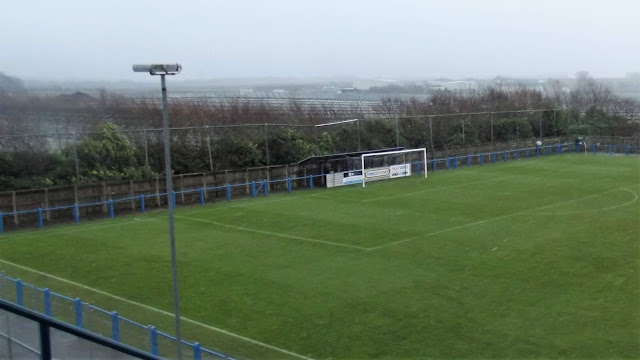 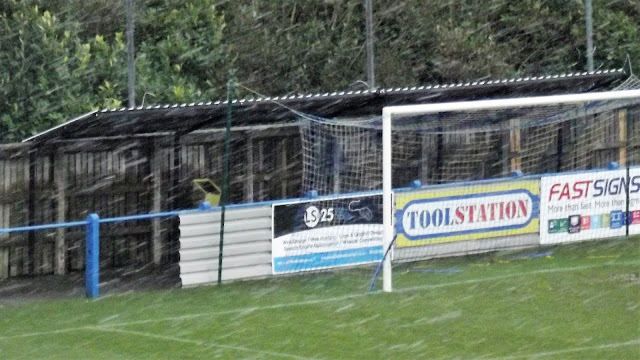 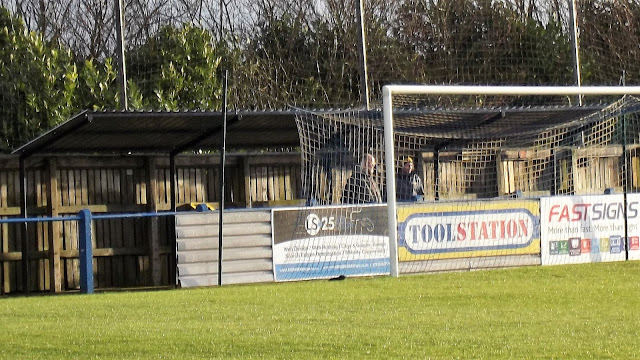 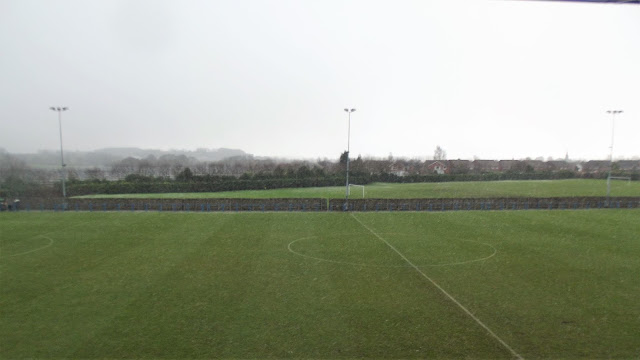 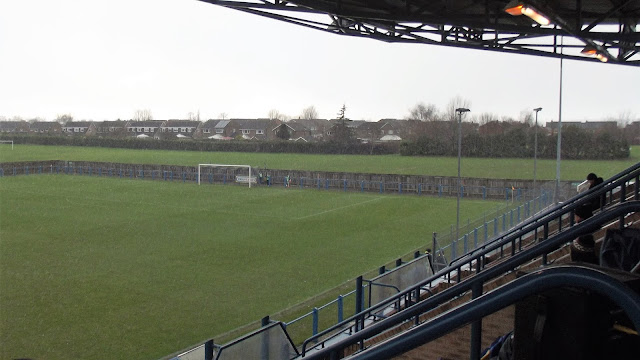