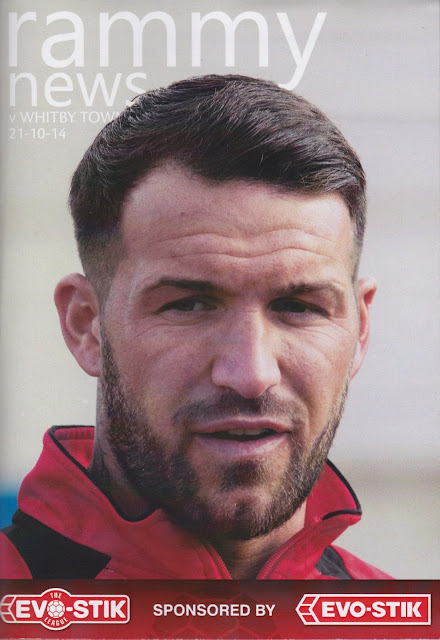 Ramsbottom United was formed in England's World Cup winning year of 1966 by present chairman Harry Williams. The club played in the Bury, Bolton and Manchester Leagues before joining the North West Counties League in 1995. They started in the competitions lower tier but within 2 seasons they were in the Premier Division. A fairly long stay in this division was generally successful and they gained promotion to the NPL Division 1 North in 2012. Again success was forthcoming and last season they completed a memorable few years by winning against Bamber Bridge in the promotion playoff final after scoring an incredible 112 goals, but only finishing 5th. This was all thanks to the great work of young joint management duo Bernard Morley and Anthony Johnson. Again this season they were doing incredibly, with the team being in 4th place after the game ended.

To cope with this rise in leagues, the club has had to adapt their ground accordingly. This includes several items from old league grounds, including floodlights and executive lounges from Oldham Athletic and seats from Manchester City's old Maine Road stadium. They had their record attendance of 1653 against FC United of Manchester in 2007. In the FA Cup, their best run came in their very first season in the competition in 1998/99. They beat Maine Road, Shildon and Billingham before losing to Southport in the 3rd Qualifying Round. In the FA Trophy, they got to the 3rd Qualifying Round last season, whilst the 3rd Round of the FA Vase was reached in 2003/04 with them beating current football league side Fleetwood Town along the way. 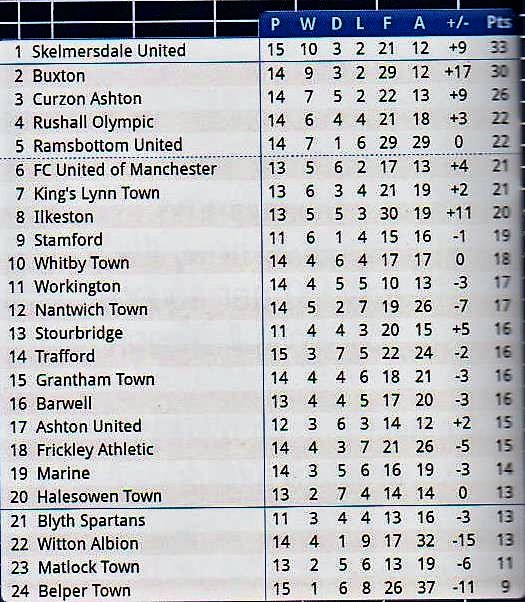 When I was looking for a Tuesday night game on my week away, I wanted to do one at as high as step as possible as I would be at step 5 and below for all the other games. I had 2 options in the NPL Premier - Trafford who had been friendly when I went to visit to look at the ground and Ramsbottom United v Whitby Town. I had also been to that for pictures and it had been a nice looking ground and looking on various sites, it also appeared that looking on various sites, it was the better area for some pre-match refreshment. So I settled on that one and booked the nearest reasonably priced hotel that I could find, 10 miles away in Whitefield.

The previous night I had a restless nights sleep at first, but eventually, I dropped off and woke up at 9am. I checked Facebook and had a bath before catching up on my blog.
I left at just after 10 and made my way to my next hotel near Whitefield. It took a bit longer than usual because of road closures and traffic. I parked up outside and walked to Whitefield tram stop about 10 minutes away and paid £4.30 for a return into Manchester. I had to stop briefly as my tram only went to Abraham Moss. It was only a few minutes wait to get on the next one and by 12.10 I was in the city centre. I was hungry by then so I got a half decent rice bowl for £1 and then walked the short distance to the Angel pub where I tried a couple of new ciders. I was hungry again so I went back to the same shop and got black pudding and chips. After another look around some shops where I bought a Rayman game for 99p. I then went for another look round the football museum which I had visited twice previously. By now it was nearly 4pm and with my phone battery rapidly deteriorating I caught the tram back to my hotel. I had trouble getting in as they had not sent me my code for the day. Phoning them was tricky too as the phone signal was so poor but after 5 minutes I got it sorted and was in my room with my phone in charge. The weather was looking iffy so I was keeping a close eye on Twitter while I was watching The Chase so I  could make last minute changes of destination if needed. There was no such drastic action needed as I left at 6pm. The M60 was slow though because of the rush hour and eventually, I got there at 6.45. After confirming that the match was definitely on I made my way to the pre-match pub that I had found out about online. It was called The First Chop and was totally brilliant with a great range of ciders. There was also a very friendly dog in the pub, which I always enjoy. After the pub, I went to the Stop In takeaway where I had a doner calzone, chips and a can for £3.50. The chips were average but the calzone was delicious and great value. 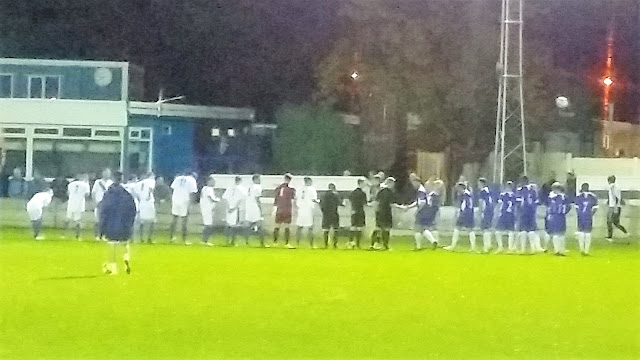 It took me 5 minutes to walk back to the ground and after paying £9 entry and £2 for a programme I went and took some pictures of the ground. My phone battery had been giving me problems all day and I had to limit my usage again, but at least I had football to keep me occupied. A nice halftime treat was Bovril in a proper mug for just 60p.
The opening goal came for the home side after 8 minutes when Jordan Hulme capped a good run with a tidy finish. Ramsbottom were dominating and the visitors had their job made a lot harder when they had their number 6 sent off, apparently for elbowing. It looked a bit harsh from where I was standing. He was being held by his opponent, in return, he shoved him away with his arm, but got his marching orders. The game was put to bed with 2 goals close together The first was a deflected own goal on 74 minutes by Lee Bullock the second a couple of minutes later was a lovely goal by Phil Dean as his shot from the edge of the area went in the bottom right-hand corner.  Whitby's misery was completed on 90 minutes when a last minute penalty was converted by Jon Robinson to make it a deserved 4-0 win for Ramsbottom. After the game, it was a quick 20-minute drive back to my hotel. No pub for me tonight as my phone was dead but I did get a couple of bottles of an American cider that I had not tried before. I drank these while I watched TV, particularly enjoying Dave Gorman's Modern Life Is Goodish. I then watched the Champions League show on ITV where their coverage was actually quite good for once, considering their dire performances when doing the England games.

THE RIVERSIDE STADIUM is a lovely place to watch football. Covered on 3 sides, there is sheltered standing for around 500 behind each goal, plus seating for around the same along the side. The one remaining side has uncovered standing, plus some executive box type buildings. The tea bar and club shop are all in one building and have a fairly good range, while the clubhouse is shared with the cricket club who are based next door.

The programme is excellent and had an interesting article on the costs of football. It was good value for £2 and though the entry was a pound more than my ideal price for this level of £8 it was still good value and one of the cheaper ones at this level. Ramsbottom is a lovely town, the Chop House is a great pub and there is plenty of choices if you want something else to eat or drink. It's also well kept and a pleasant place to spend a day. 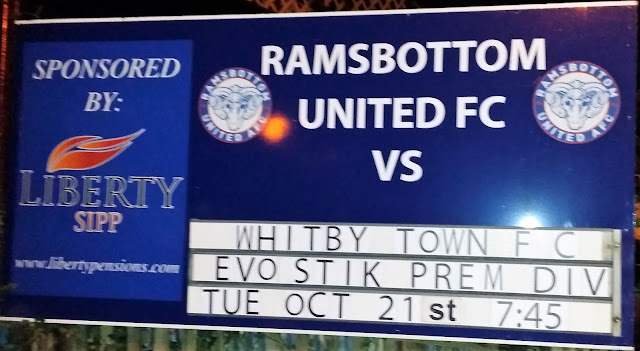 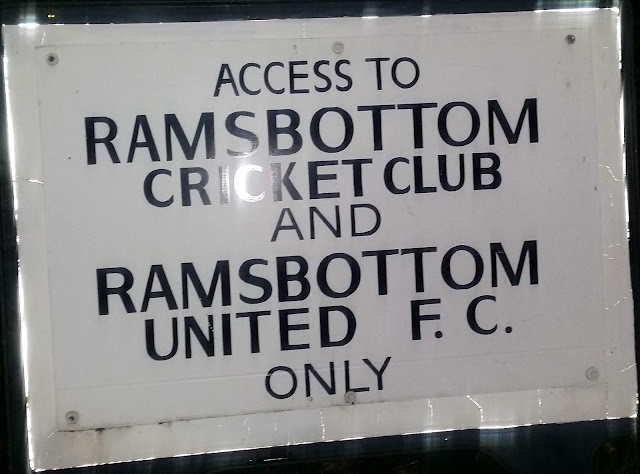 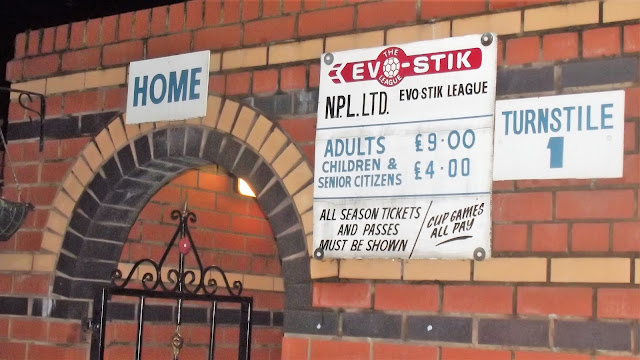 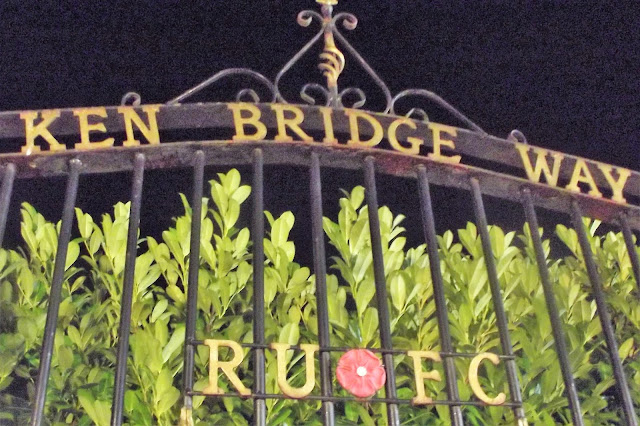 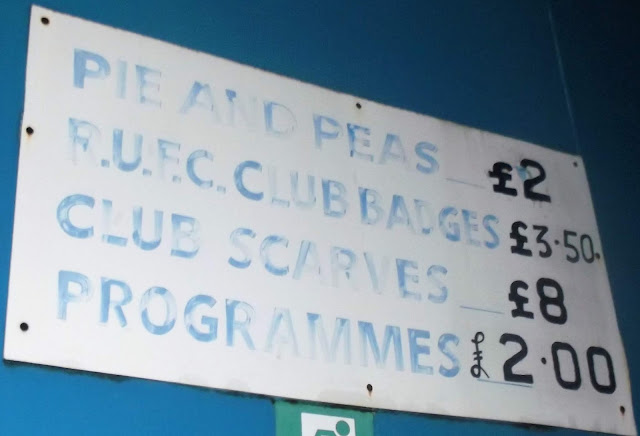 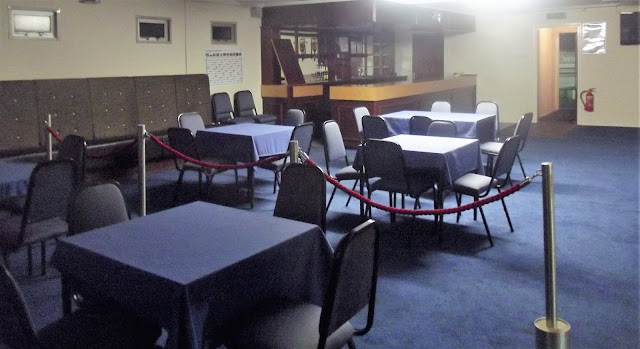 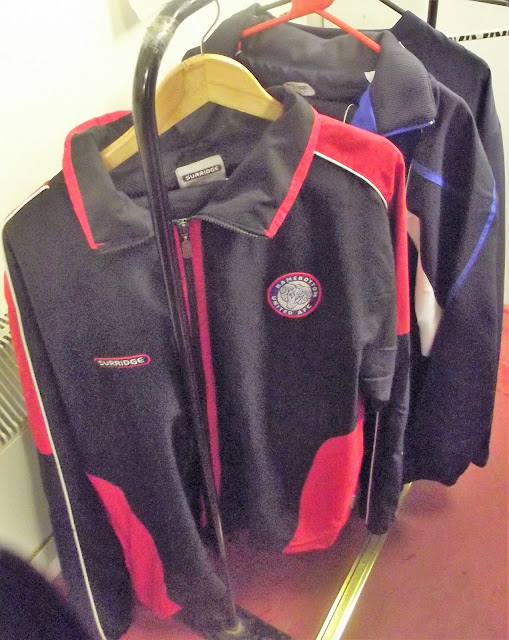 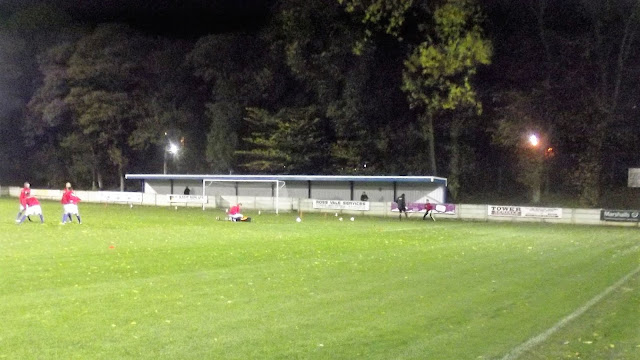 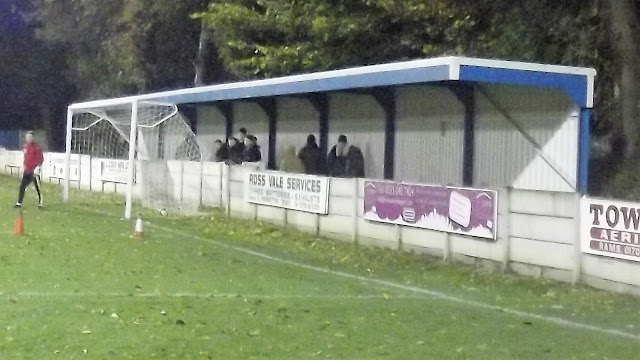 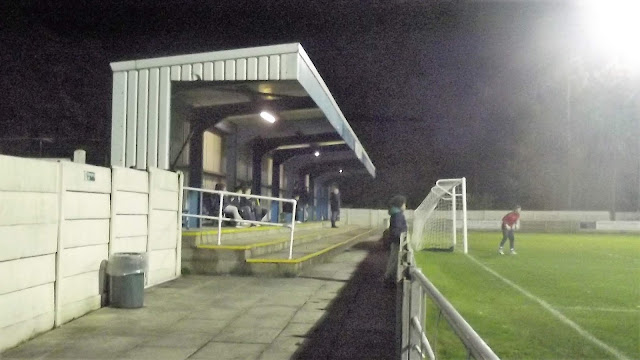 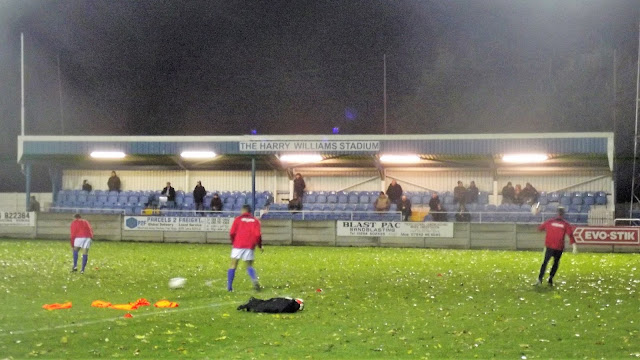 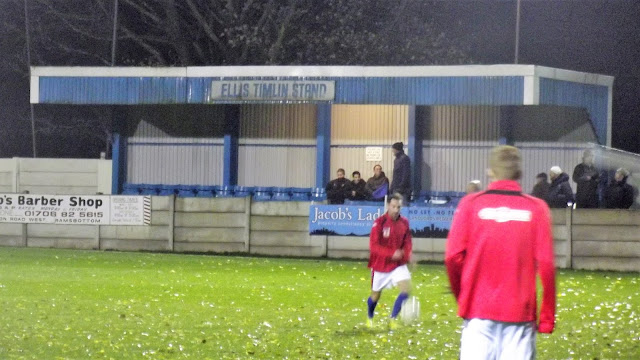 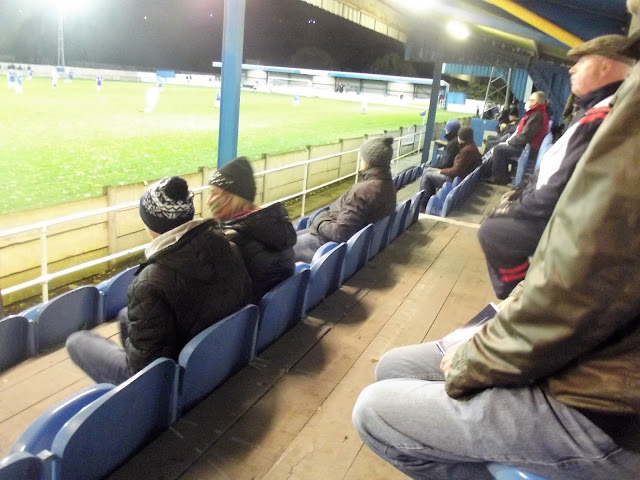 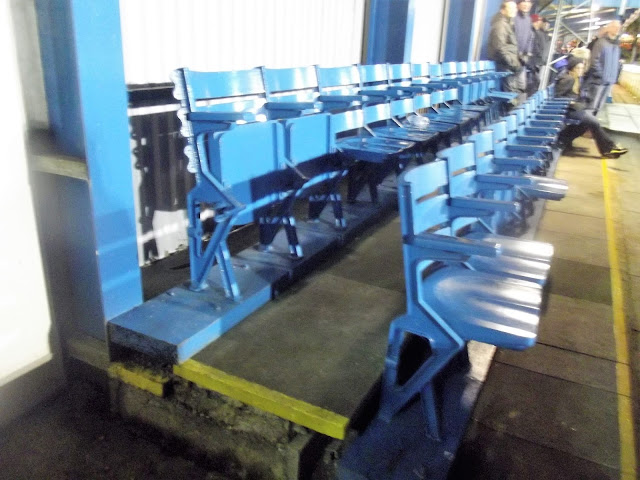 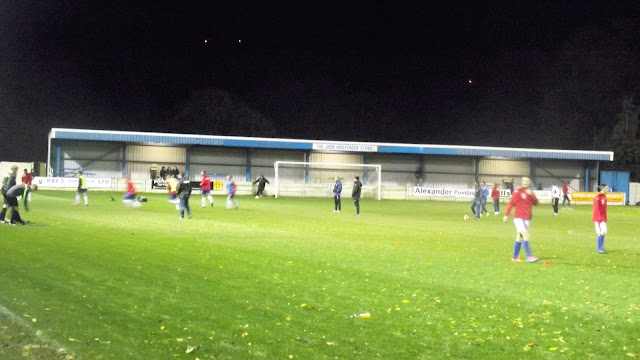 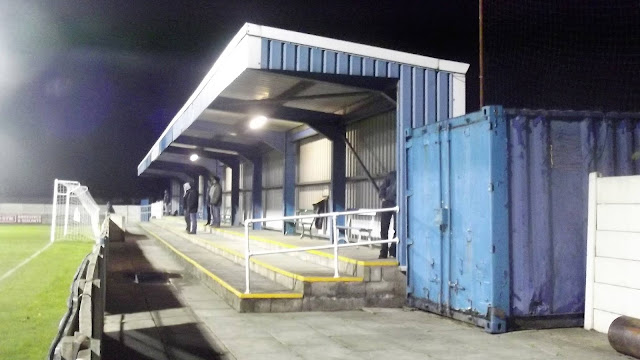 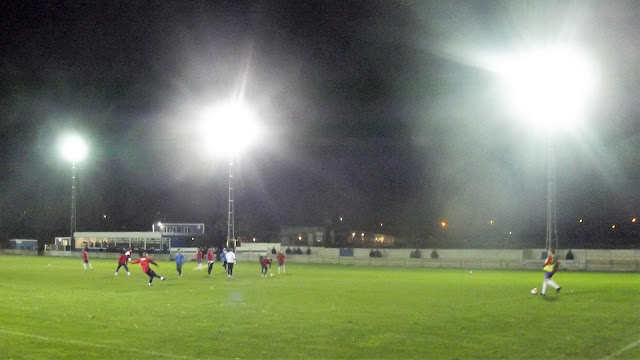