For my last game of the week, it was a trip to the one I had been looking forward to the most. It was also the one I had the most trouble getting tickets for. For although Liverpool has had a pretty mediocre squad the past few years and have not won the league in over 20 years, the support for the club is still fantastic, and they still sell out every week, despite some eye-watering prices. They have not looked like winning the league either. There was a summer about 5 years ago when they looked like by adding 2 or 3 new players they could make a real go of having a bash at the title. But instead, they lost Alonso and signed mediocre players instead. They had even struggled along at the bottom of the league at one point, under current England manager Roy Hodgson. And they had had the ignominy of going out the league cup to bottom division Northampton Town, at Anfield of all places.

But the club had a rich and proud history. From the great players and teams of yesteryear that dominated the football league for so long, to the sensitive and touching way they handled Hillsborough, they have always been a club to do things the right way. That was until Luis Suarez racially abused Patrice Evra and they all wore t-shirts supporting him when perhaps it would have been better to keep quiet. But there is no doubt that 2 stadium disasters have been the low points in the club history 96 fans lost their lives at Hillsborough in 1989, due in part to inefficiency by the police, but mainly due to the barbaric design of the stadium, with its pens and high fences. Without a thought for spectator safety, these were designed to keep fans off of the pitch, even though the main problems with hooligans were outside the ground. And the event that possibly led to this crazy decision, in Heysel, Belgium in 1985. This time, hooliganism by a small number of people claiming to support Liverpool led to the death of 39 Juventus fans. Both events were a tragic waste of human life - you don't go to a game of football expecting to die. 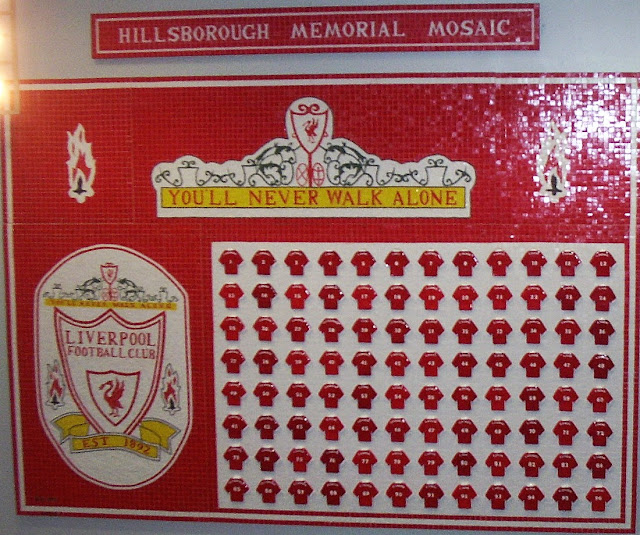 On the day I had to leave my hotel earlier than usual. I was planning to meet a fellow blogger and Sheffield Wednesday fan Tom Jellis in the Ship and Mitre pub in Liverpool, somewhere we had both enjoyed when we had visited on our own on previous occasions. I left my hotel in Doncaster at 9.30am and by 11.15 was parked up in a side street near Anfield, about 10 minutes walk away in fact. I then took the 40-minute walk into Liverpool city centre to the pub where we had planned to meet. Tom was not there yet, so I got myself half of a Swedish cider that I had not tried before. While I was finishing that, he arrived. We talked about everything from football to politics and sank a few drinks during that time. There was a beer festival on, with 7 ciders that I had not tried before. Luckily they did third of a pint glasses, meaning I could have multiple ones. I also had a Belgian Cherry Beer. At 4, we said our goodbyes and I went off in search of food. I found an excellent local chip shop, called The Mussel Pot I think. Anyway, Haggis and Chips was great, washed down with some Irn-Bru. 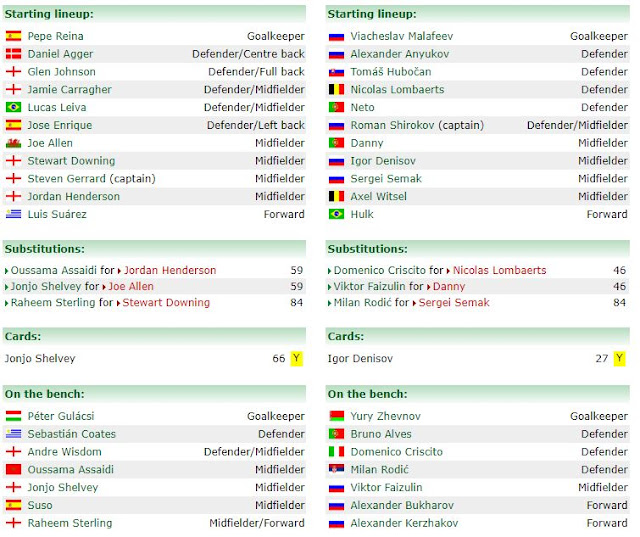 I set off for the ground about 6.50. After a look around, getting some chips and gravy and some biscuits I was ready to go in. I had a look at the souvenir stalls and visited the Hillsborough Justice shop, which is all about getting justice for the families of the stadium tragedy. This has been achieved in part, thanks to a recent court case that found South Yorkshire Police culpable for much of the blame. This is just part of the fundraising, the most famous example being the recently released single, which I was more than happy to stump up for. I entered at the ground at 7.30. I was a bit worried when the steward directed me to a seat right next to a wall, having seen some of the restricted view seats on the internet before. But I needn't have worried. The view was excellent and the atmosphere was good, making Anfield one of my favourite bigger grounds that I have visited. The tannoy announcer was also excellent and has an immediately recognisable voice that I had heard in the background of TV games at Anfield before. The man in question, George Sephton has done the job since the early 1970s. They have a random fan nominate the songs before the game and at half time and naturally, the Beatles, Liverpool's most famous musical export featured. This just added to the feeling of enjoyment as I like their music. Liverpool were trailing 2-0 from the first leg and things looked ominous when Hulk scored for Zenit after a mistake from Liverpool stalwart, and one of the few players that has consistently proved he is good enough to wear the shirt, Jamie Carragher. Liverpool were looking the all too familiar busted flush at this part, but thankfully things changed. The atmosphere was etched up another notch as goals from Joe Allen and a fantastic free-kick from Luis Suarez gave Liverpool a half time lead. By this time they were playing as good as any Liverpool side of old and had the crowd behind them. Sadly despite having most of the play, they could only add one more, another great free kick by Suarez. They were desperately unlucky not to score more and sadly went out on away goals, the earlier slip from Carragher being their undoing. Such a shame for a club legend and a spirited Reds performance.

I left the ground downbeat at the result but having enjoyed the matchday experience. It was ground 91 of the 92, with me still having Sunderland to do. It had been a fitting end to the week of football. Getting out of the ground, driving wise, seemed easy at first, having a clear run for about a mile. I had directed my Sat Nav to go to Asda for Petrol, the last mile of that took around 40 minutes and when I got there it was closed. This was strange seeing as it was a card only pump. I set my Sat Nav for home, hoping to pass a petrol station. It took me over an hour to reach the next station, just near the motorway. I then had to queue for another 20 minutes to get into the station, and the petrol was really expensive too, 5p a litre more than I paid last time out. I stuck in enough to get me home and I had been there so long that the road was now clear. During this time I had listened to a really good show on City Talk with a host called Pete Price, which was a lot better than most of the late night drivel that is on the radio. It was nearly midnight by the time I got on the motorway and it was nearly 3am by the time I got in. It had been a good week, but an expensive one. I had done 1280 miles and spent quite a bit. But I had a good time, and met some great people as well as seeing plenty of games and other stuff that was enjoyable. The next day my phone was whinging about lack of space, so I deleted my photo folder, thinking that they were all backed up online. But they weren't and a lot of my photos were lost, especially of the bigger grounds. Luckily for Anfield, I had been on a stadium tour a few years back and had some pictures from then. It was still annoying not to have some from matchday though and that applied for most of my visits that week.

ANFIELD is a fantastic traditional stadium. While it isn't up there with a few stadiums in terms of modern facilities and capacity, it certainly has a lot of character and history. The capacity is 42000 and all 4 stands are of a similar size. I chose the Centenary Upper as it was the ideal medium between a good view and a cost-effective ticket. There is merchandise stalls galore and the same thing with takeaways. There are also a fair number of pubs, but the best is in the city centre, called the Ship and Mitre. The city is a brisk 30-minute walk away and is well worth the effort as there is plenty to see and do. 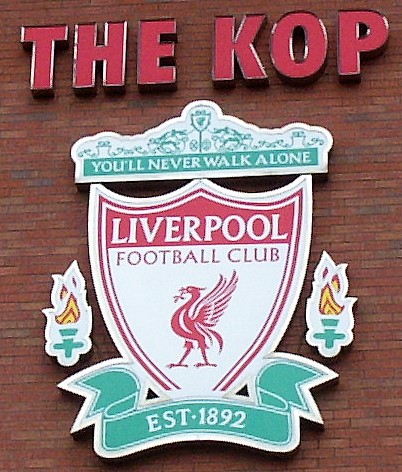 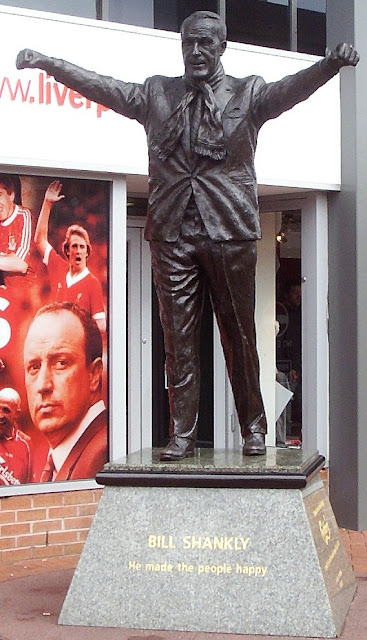 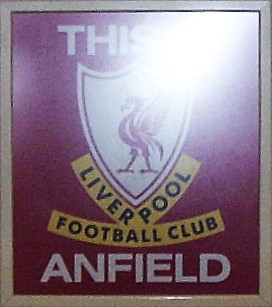 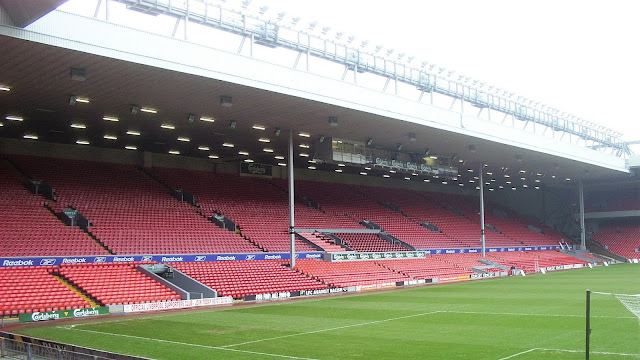 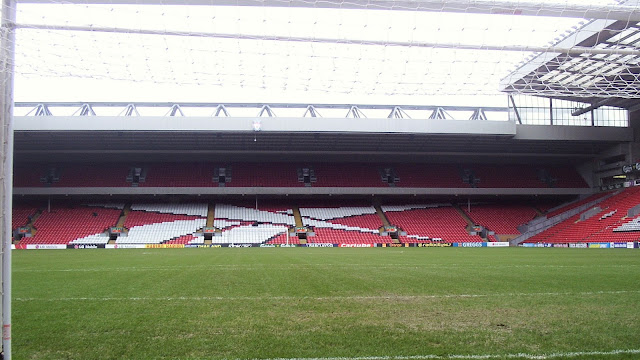 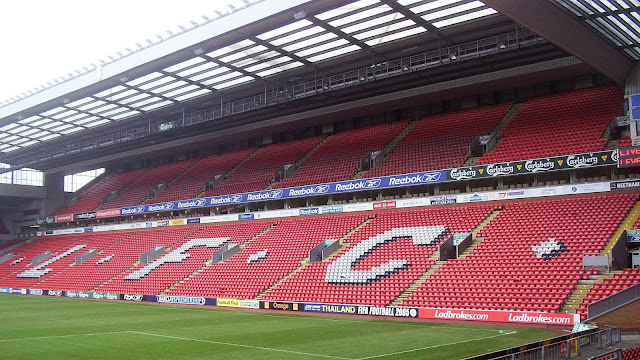