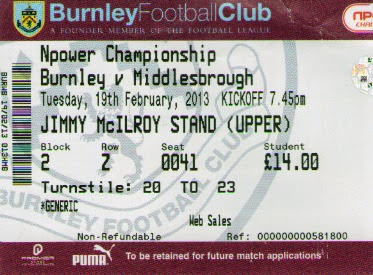 I had been wanting to go to Burnley for a while, as part of my mission to complete the 92 league grounds. This would be number 90, with just Liverpool and Sunderland to come. I had missed out on going here in the late 90s when Wycombe were in the same league as the Clarets. I remember a particularly sweet 5-0 home win against them. We were struggling in the league at the time, and they were pushing for promotion with a number of very good players in their side. The result certainly ruffled a few feathers and the 3 points ensured another year in Division 2 (now called League 1) I was originally planning to go on Saturday, but their game against Huddersfield Town was rearranged due to the Terriers involvement in the FA Cup. Luckily trip up North was not in vain, and I was able to complete it on Tuesday instead. I had opted to just get my ticket up there on the day as they only ever half sell out the ground. They were also doing a cheap ticket deal if you got a season ticket holder to get it for you. Sadly I got no reply to my plea on their message board, so was going to have to pay the going rate. I had spent the afternoon watching Bury Reserves v Burton Albion Reserves at Radcliffe Borough, before driving to Burnley. I got there around 3.30 and my first job was to go and get my ticket for the nights game. I then went into town, looking around the shops before going to a pub, The Bridge Bier Huis, that had been recommended to me. Though there wasn't much I fancied in the shops, they were still good. The pub was even better, I had a cider and a couple of Belgian fruit beers, all at reasonable prices. I then went to a cash machine before getting some keema curry and chips for £2.30 at a local takeaway, which was totally delicious.

My phone battery was only on 18% at that point, so with there being around 40 minutes to kick off, I went back to the car for a quick top up. With it being 7.30, I left with my phone at 32% and went and took my seat in the upper tier of the James McIlroy stand. The view was excellent and really high up. Sadly the game didn't live up to the view and was probably one of the worst games I have ever seen in nearly 22 years of watching football. Seeing that Sean Dyche was in charge of Burnley and was previously considered for the Wycombe job, I am glad we opted for Gareth Ainsworth instead. Instead of getting a point for drawing, both teams should have been deducted points for putting on such a snorefest. After the game, I got out of Burnley pretty quickly and was back at my hotel by 10.20. I had seen a great game in the reserves league, which was probably the best of my week away. And sadly the one in the Championship will not be beaten for dullness for a very long time, or at least I hope it isn't.

TURF MOOR has been modernised over the years with new stands on 2 sides of the ground. These are similar in height and design with the James Hargreaves stand along the side and the Jimmy McIlroy behind the goal. The Bob Lord stand is the other side stand and completing the set is the David Fishwick stand, that can accommodate around 4000 visiting supporters. Both of the older stands have supporting pillars. The stand I opted for, the Jimmy McIlroy upper tier offered excellent views and had good legroom. The town is very close by and offers a much better range of food and drink than inside the ground. Despite the dire football on show, Burnley is still a great day out with lots to do before the game, and friendly locals. Sadly, due to a phone malfunction, my only pictures are from a non-matchday visit, made around 2008. 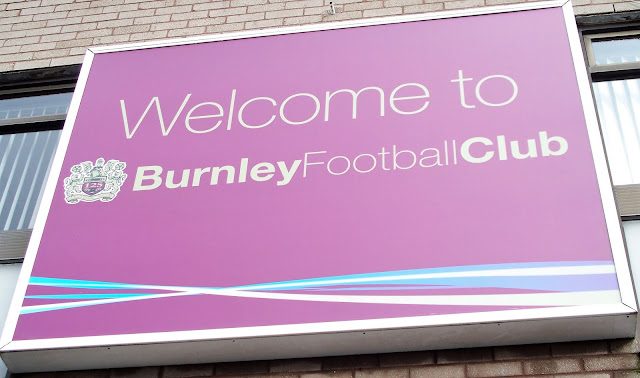 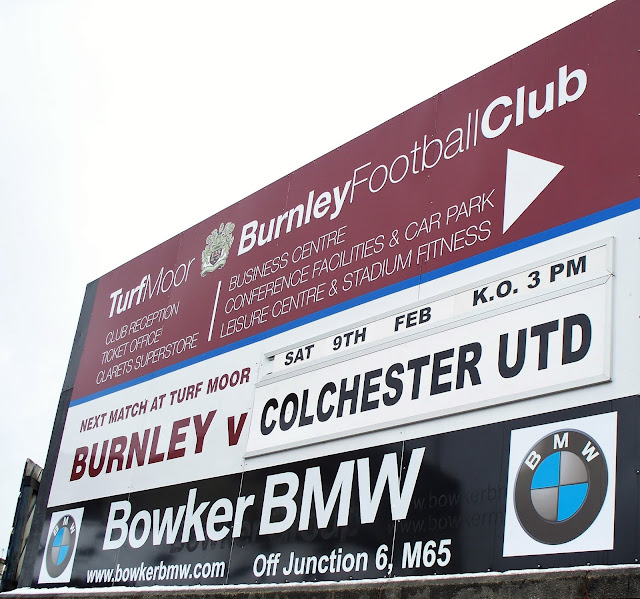 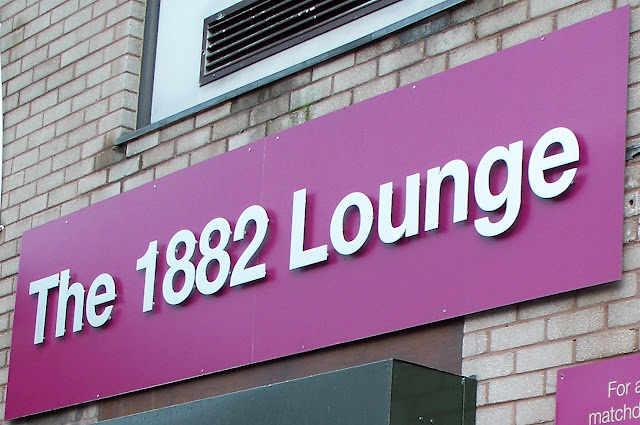 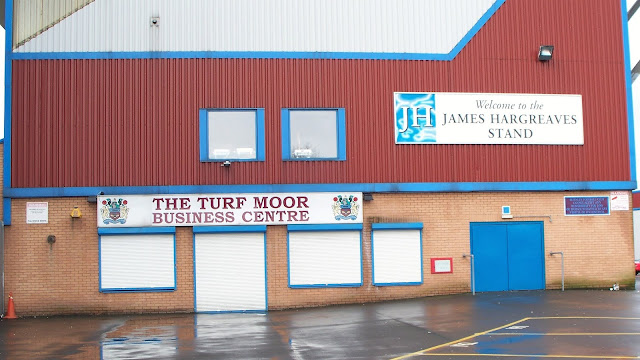 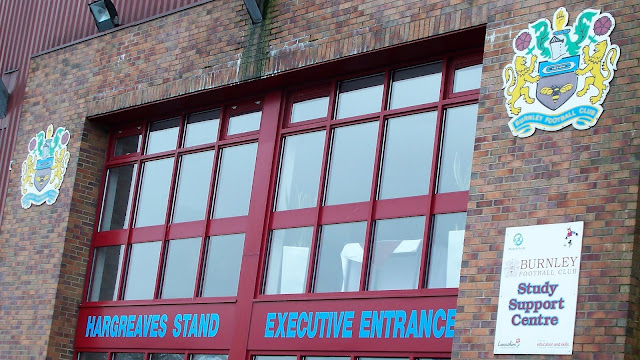 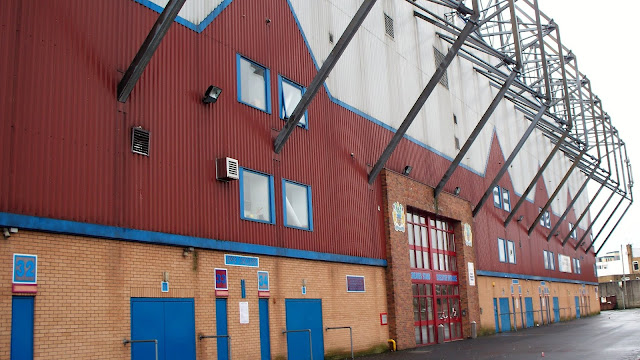 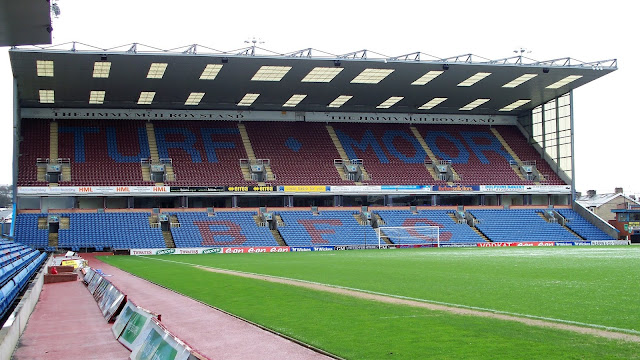 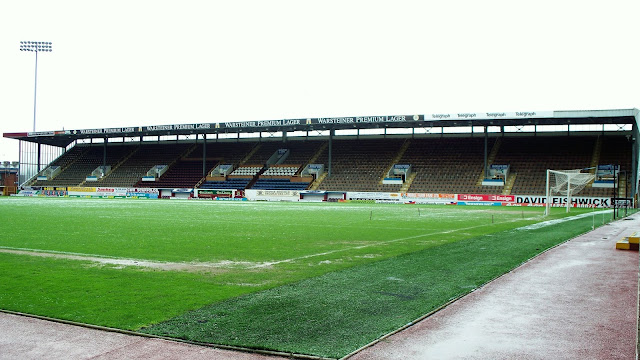 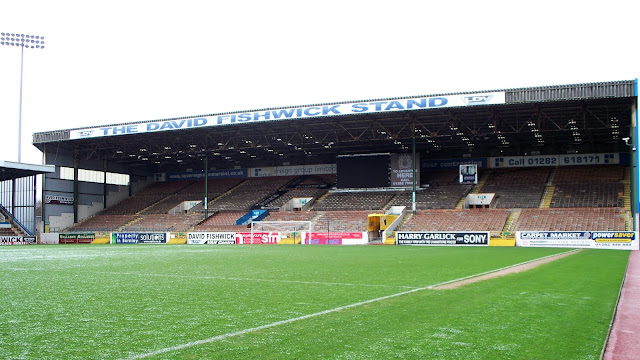 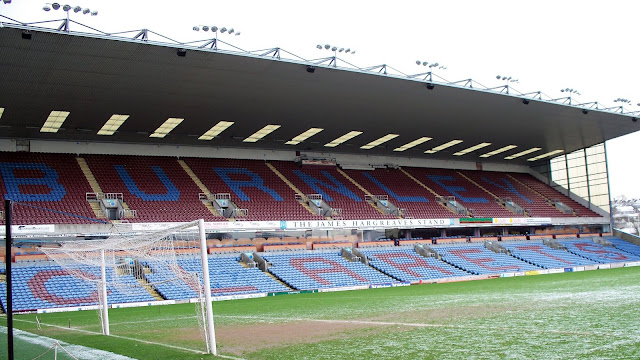