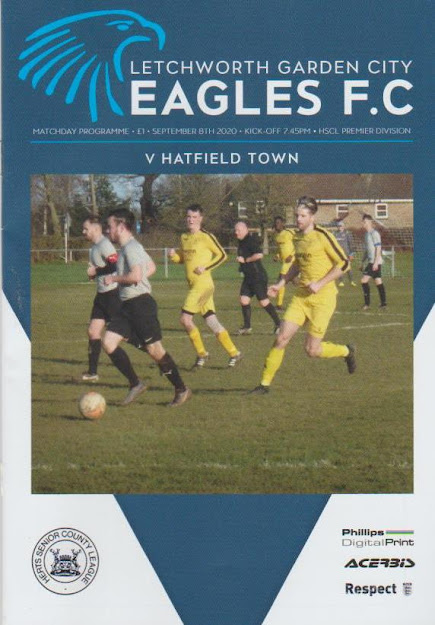 The club was established in 1979 and was initially a team for youngsters from the local Briar Patch Children's Home. There's not a lot of historical information available on the web but they progressed naturally into men's football and played in various local leagues before joining the Herts Senior County League in 2008, starting in Division 1 (step 8). After a mid-table finish in their first season, they were champions in 2010. Since then, they have been in the Premier Division and have been highly successful, finishing as runners-up on three occasions before winning the league in 2019. They were denied promotion by the FA for not having their ground up to standard on time and were dealt another blow last season with them leading the league before it was declared null and void with them winning 16 of their 18 games played.

The club has not yet entered the FA Cup or FA Vase but local cup honours include the Anagram Records Trophy (2011, 2015 & 2017), the Aubrey Cup (2010, 2011 & 2012) and the Herts Senior Centenary Trophy (2015). The town of Letchworth has a population of just over 33,000 and was the home of the UK's first-ever roundabout in 1909. There have been various other teams playing in the town, most notably Letchworth FC who played in the Spartan South Midlands League and used the Herts County FA Ground. Well-known residents of the town have included film director Michael Winner, footballer Dave Kitson BBC presenter Jennie Bond and writer A.A Gill. 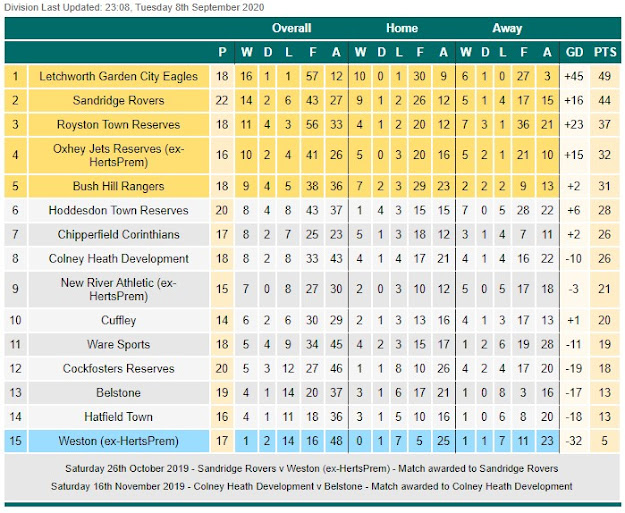 Initially, I wasn't going to do a game on this day, preferring instead to stay in for the England game. But then a number of things changed my mind, not least that I had a couple more cans than intended on Sunday (usually a sober day for me) after the Brentford v Wycombe on Sky. The reason for the extra imbibement was the news of a sharp rise in Covid-19 cases, meaning that potentially my third period of time off in a row could be wasted with vastly reduced fixture choice, or worst of all, no games at all. I'm fairly comfortable with abiding by all the restrictions, but the cancel culture has been rife during this crisis. Football was seemingly the first thing to close down and the last thing to open up, indeed, the first six levels are still enforcing the vileness that is 'behind closed doors'. There wasn't the greatest choice of options at step 1-6, but a trip to the Non-League Matters forum pulled up a decent option in Letchworth Garden City Eagles v Hatfield Town. I'd been to a really nice pub when I'd visited the adjacent Herts County Ground but I'd be giving it the swerve this time. I'd tried to rope in fellow hopper Anwar, but he'd responded with his bog-standard 'I'll let u no' reply. In the end, I decided to do it on my own as it was quite a lengthy detour to go via Aylesbury, though I'd miss his company. 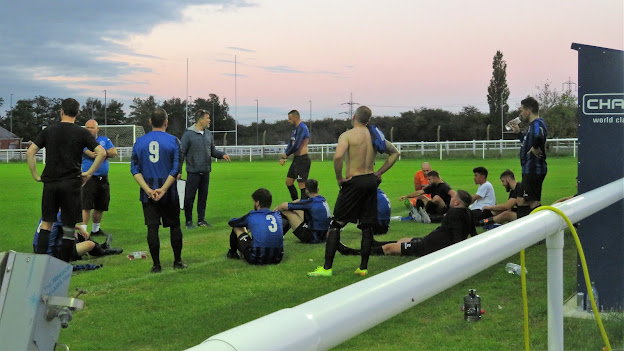 On Monday night, I started putting together plans for my time off, including a few days in Devon. I had a good nights sleep for once, though I woke up at my normal work time, I managed to get back to sleep for a few more hours. I spent the morning relaxing, before going out for a walk at 11. A nice six miles were put in before I came home for lunch. I spent the afternoon at home, trying to make future plans, with Crediton United v Honiton Town being a game I hope to go to on the first Monday of my time off as part of my trip down that way. I had dinner and left at 6, the journey being a surprisingly good one with only around five minutes delay thanks to a lane closure on the A414. I listened to TalkSPORT's build-up of the Denmark v England game on the way, arriving just before 7 and parking in the leisure centre car park. Entry was free, so I bought a programme for £1, though I was a pain as I only had a tenner and had to have £9 back in coins. Everyone at the club was nice and friendly and there were a number of hoppers there, including Graham who writes his 'Modus Hopper Random' blog which is always a good read. 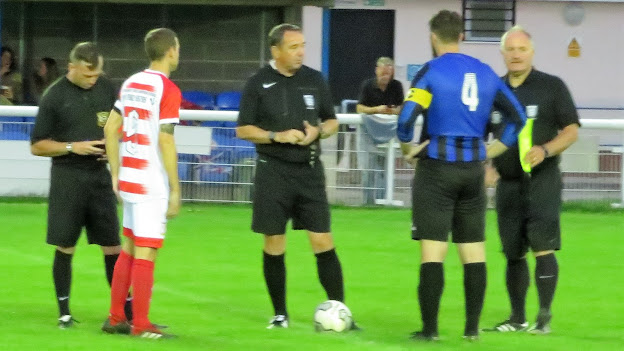 The two sides had enjoyed contrasting fortunes last season with Letchworth Garden City Eagles leading the league by five points, as well as having four games in hand before everything was cancelled. Hatfield Town meanwhile were sitting second-bottom and had not had the best of times since I saw them in a Spartan South Midlands League Premier Division game in early 2014. The hosts had enjoyed a winning start, triumphing 2-1 at league new-boys Glenn Sports, whilst the visitors had drawn 0-0 at home to Welwyn Garden City Reserves. I opted to stand on the far side where it was a bit quieter, the game kicked off fifteen minutes later than the advertised 7.30 kick-off, with the Hatfield team keeping him waiting for a good five minutes. When it did start, the team bonding must have helped the visitors as they were by far the more proactive side. Their manager was very vocal and encouraging and both benches were very active in trying to get the referee on side - there was even a row between a couple of the coaching staff at one point, but nothing serious. Letchworth improved towards the end, but neither side was really testing either goalkeeper at all. The half time period only lasted ten minutes but when the game restarted, the play was more equal. Both sides kept getting caught offside though, which kept the chances down. The only goal of the game came on 72 minutes. A free-kick was put in and cleared a couple of times but when it came out for the third time, the Hatfield man kept his cool and finished with a low shot into the bottom hand corner from just outside the area. The hosts attempted to mount a comeback and they forced a couple of good saves out of the goalkeeper, but it was too little, too late. There were plenty of meaty tackles going in, though nothing serious, though a few insults were traded between the two sets of players. In the end, though, Hatfield held on for a deserved win and their first three points of the season.

A famous night for @HatfieldTownFC as they record a fantastic 0-1 at @LGCEaglesFC in the @hscfl Premier. Great hard working performance from front to back for the visitors. Here's the goal which won it. @NPMetcalfe @NonLeaguePaper pic.twitter.com/6kSmcwSqVT

The crowd of 47 were treated to a decent game on a pleasant evening. I left at 9.30 and listened to Radio 5 as I couldn't stomach TalkSPORT's banal coverage of what had been a fairly tepid draw in Copenhagen. Hardly the greatest result, but not a disaster either. Despite the A414 being closed, I was back home by 10.25. On the way home, the government were their usual cack-handed selves, putting out information about tightening of restrictions in a late-night tweet. What that meant for watching football would be revealed next day, but all the worrying about my time off being ruined kept me awake for ages and I didn't have the best night's sleep before my 4 am alarm the next morning. The following afternoon at 4PM bought reasonably decent news in that Non-League could continue, as long as everyone is sensible. It was a bit of a blow that I may have to wait longer to see Wycombe, but in these times a compromise is to be expected. So it looks like I'll be heading to Chesham United v Wycombe Wanderers on Friday and Broadbridge Heath v Haywards Heath on Saturday, providing the FA don't throw a spanner in the works by misunderstanding guidance, as they did back in August. 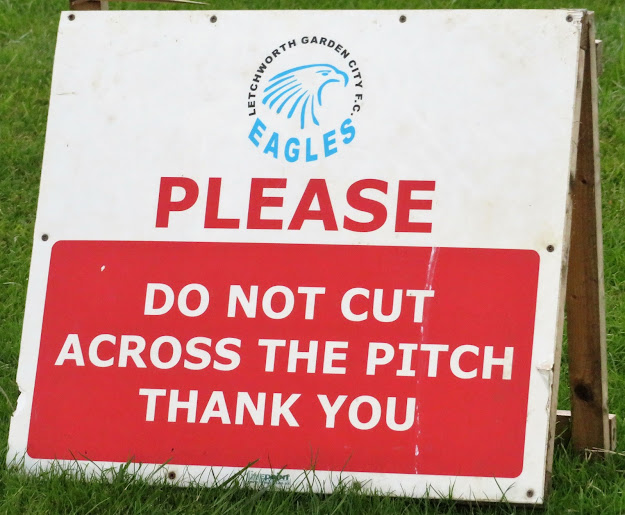 PIXMORE PLAYING FIELDS is a great ground for step 7 and has hard standing most of the way around. There's only one bit of cover and refreshingly, this is a solid structure rather than a metal 'Arena' type stand. It holds around 50 seated. Other facilities around the ground include a bar and refreshments, though these were closed on my visit. Nearby (I visited when I went to the County FA ground) is the excellent Orange Tree pub which despite being in Baldock, is around ten minutes walk away. They have an excellent range of real ales and ciders and also do home-cooked meals. 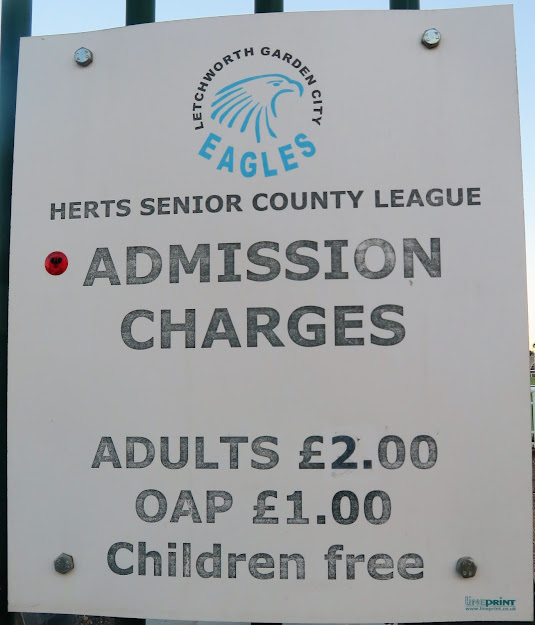 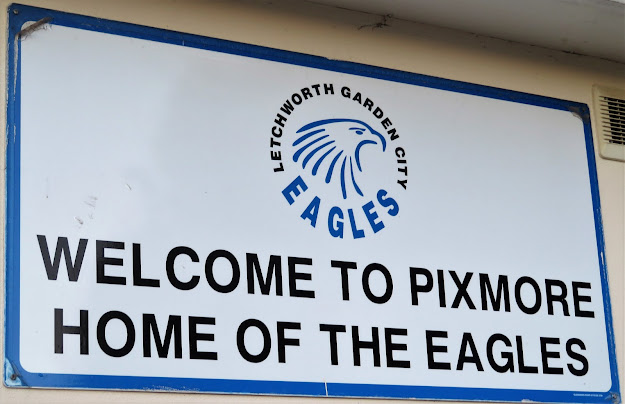 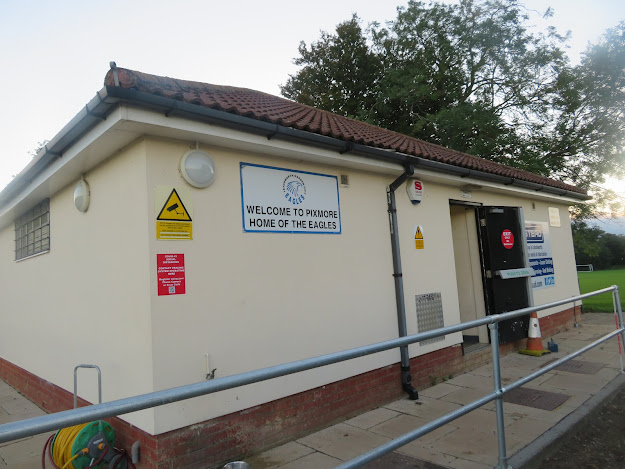 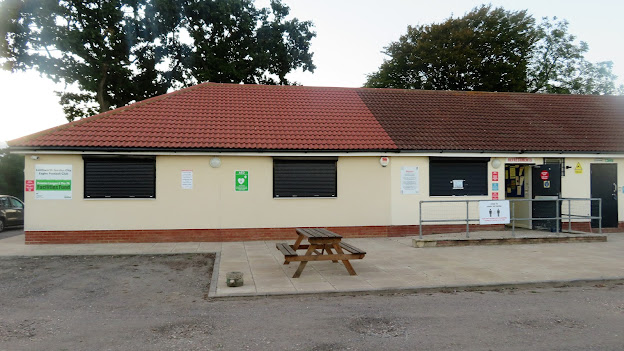 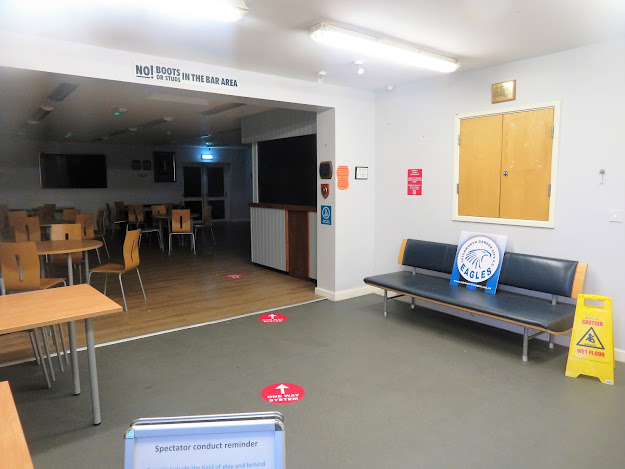 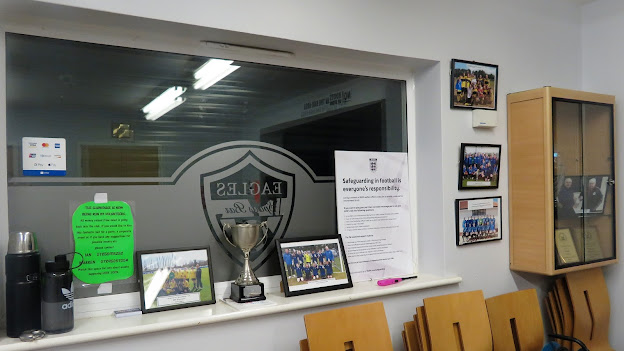 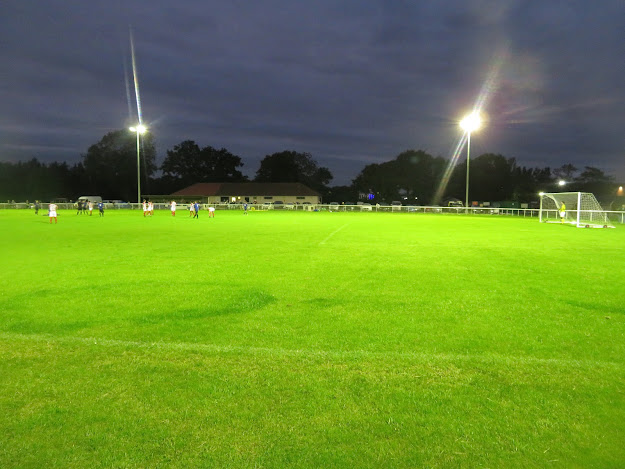 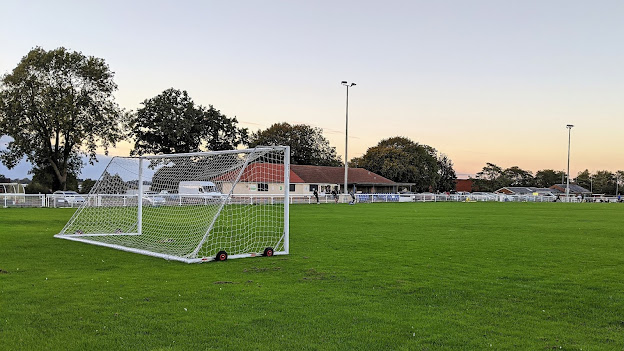 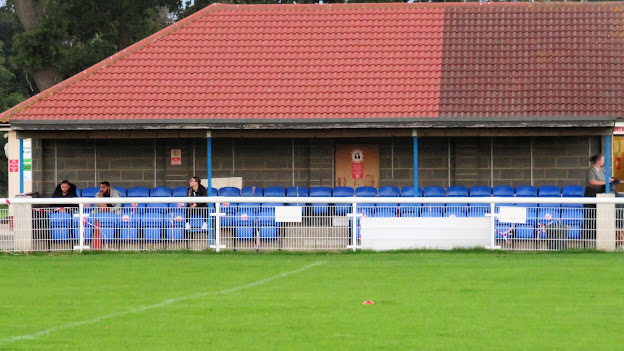 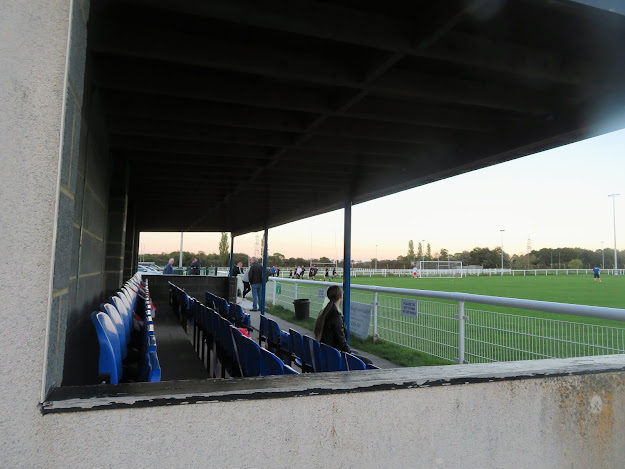 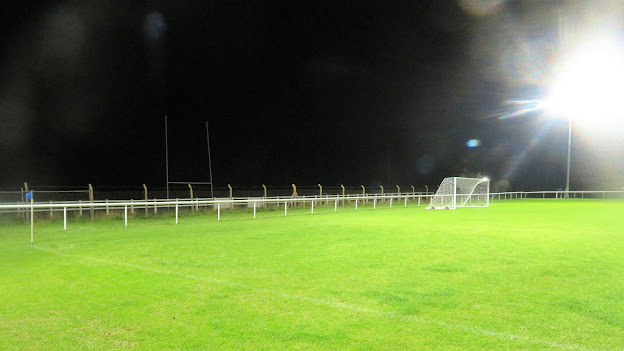 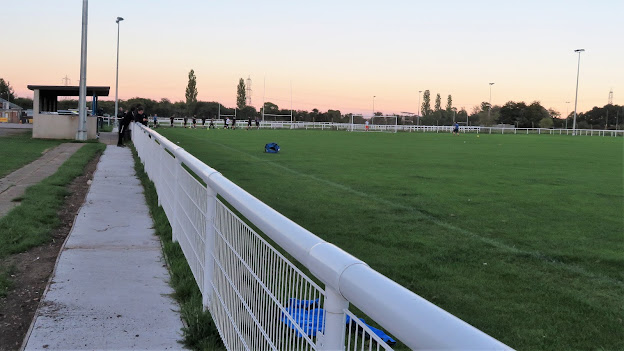 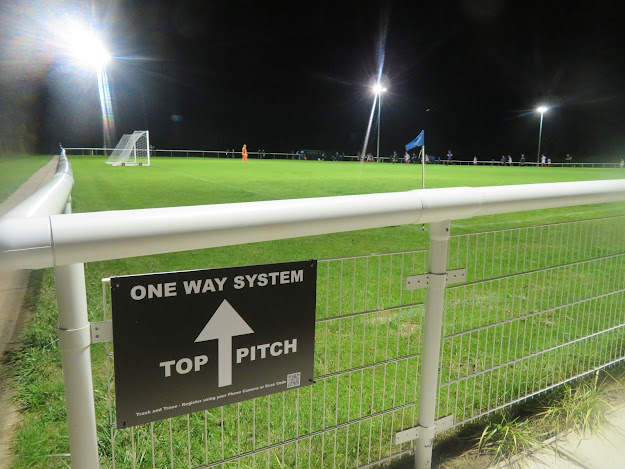 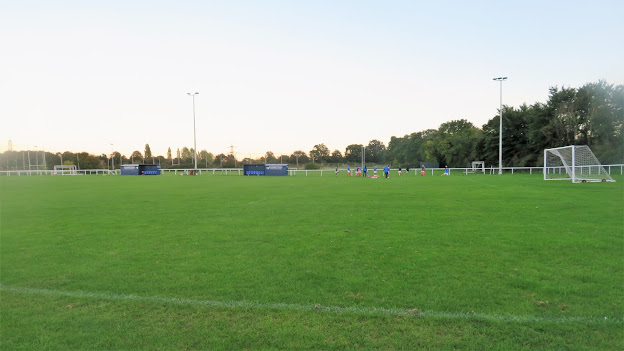 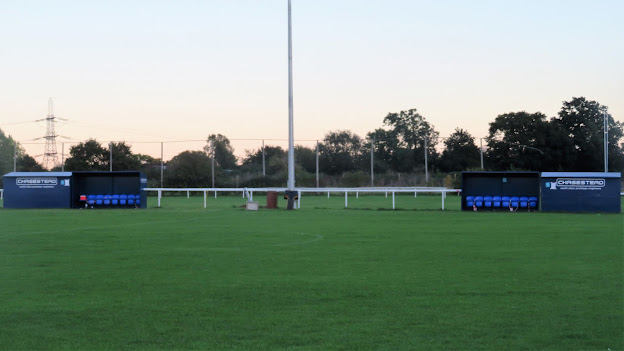 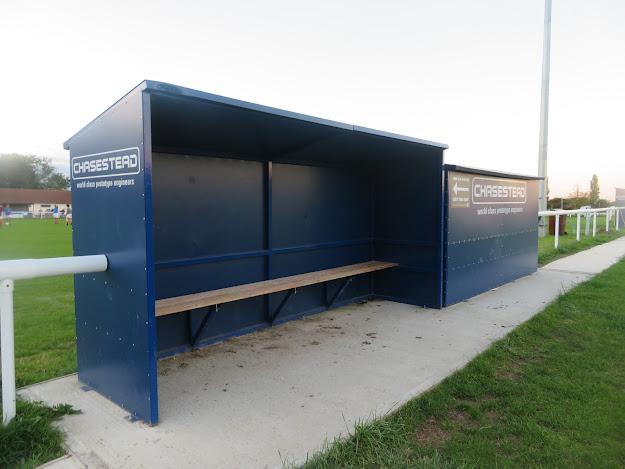 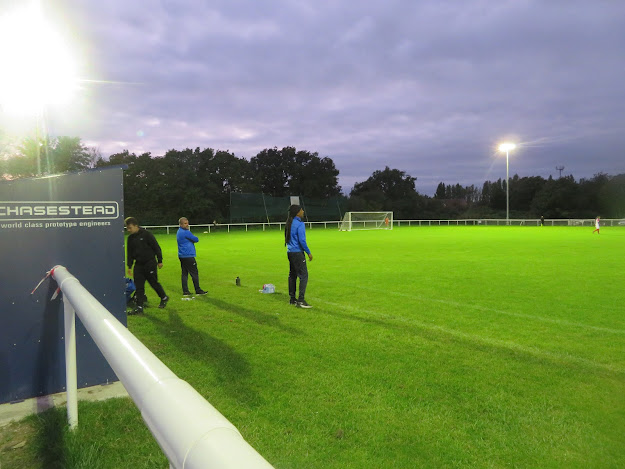 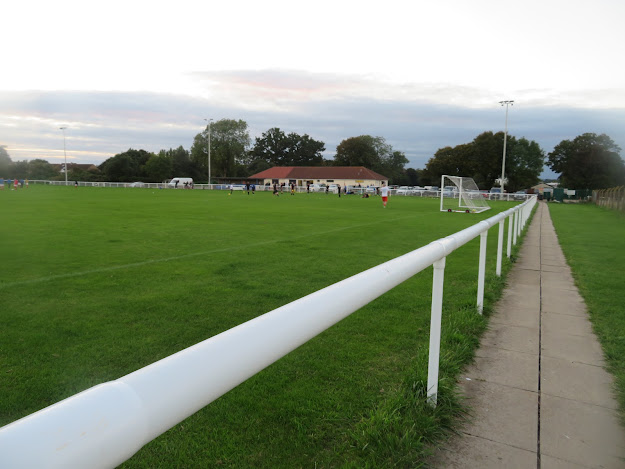