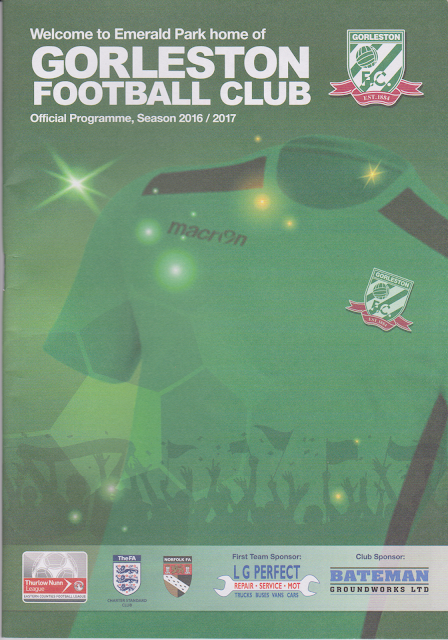 Gorleston FC was formed in 1887 by members of the local cricket club looking for a winter pastime. They initially played in very local leagues before moving to the Norfolk & Suffolk League. After being champions of the league in their last four seasons at that level, they were founder members of the Eastern Counties League in 1935. Apart from a break for the second world war and between 1960 and 1969, during which time financial difficulties forced them to play in the Norfolk & Suffolk League and Anglian Combination. Since the Eastern Counties League became a two-tier league, Gorleston have spent the majority of the time in the Premier Division, with spells in Division 1 between 1994 and 1996 and 2005 and 2011. They are three times champions of the Eastern Counties League, with the last triumph coming in 1981. In its current format, their best finish has been 3rd in the Premier Division in 2013, with the worst placing coming in 2006 when they finished 18th in Division 1. Prior to my vist, they were sitting in 4th, with a good chance of bettering their best ever finish thanks to having lots of games in hand.

In the FA Cup, the club have reached the 1st Round twice, with the first time being one to remember during the 1951/52 season. Initially drawing 2-2 with Leyton Orient at Brisbane Road, their record attendance of 4,473 saw them draw 0-0 at their home ground. The game went to a replay at Arsenal, with Gorleston unlucky to lost 5-4. The second time was one to forget as they lost 10-1 at Gillingham in 1958. 2002/03 saw their best-ever run in the FA Vase, with them reaching the 5th Round before losing to Bridlington Town. The club have won a host of local competitions including several league cups, as well as the East Anglian Cup twice and the Norfolk Senior Cup on sixteen occasions. 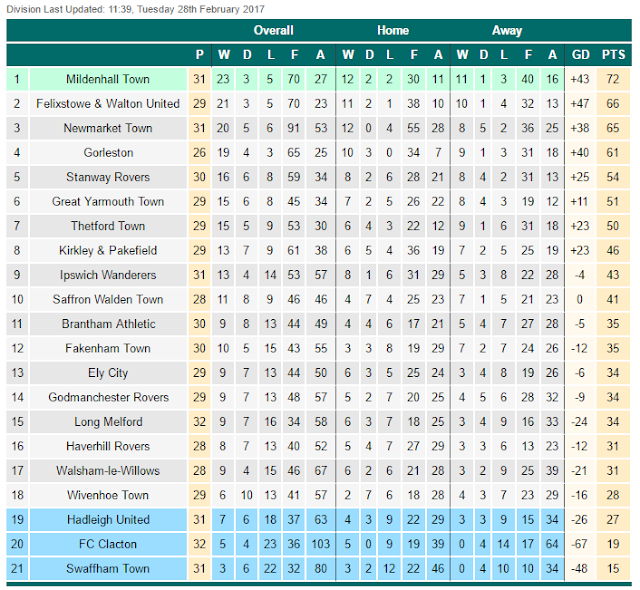 I'd been planning this Friday trip to Gorleston for ages, as it was a rare chance to see my mates from Braintree. I'd not seen them since the 17th December for another Friday night game at Thetford Town. There had been a dearth of Friday night football in the Eastern Counties League, and probably with good reason, what with the weather being really bad. There was plenty of heavy rain scheduled for the day all over the country, so I had Peterborough Northern Star as a backup should Gorleston suffer a postponement. The signs were not promising the day before, with their under 18's game called off, though there were no such problems nearer home as I went and saw my local team Holmer Green's youngsters play.

On the day of the game it was another busy day at work, but there was no overtime for me as I needed to get home. It was a sad day at work as my favourite supervisor left, in fact the only one that knows what she is doing. I came home and had a bath and some lunch whilst I checked Twitter for the latest news. Surprisingly, it seemed positive, with Gorleston optimistic that the game would go ahead. Even so, I was cautious, having had a few wasted journeys in the past, and so left as late as I could, around 3.30 PM. The journey to Braintree was reasonable with reasonable delays for school traffic, but a pretty unreasonable one for rubber necking planks who seemed more interested in gawping at an accident on the other side of the M25 than actually getting somewhere. I was on the outskirts of Braintree just before 5, but thanks to roadworks on what must be one of the worst road systems in the country, it took half an hour to do the final mile and a bit, plus another 10 minutes to wait for Maurice who was also caught in traffic. We left at 5.40 with it taking ages to get out of Braintree, then another huge amount of time on the single carriageways of Norfolk as you were stuck behind the slowest selfish pig that happened to be on the road as it was impossible to overtake. 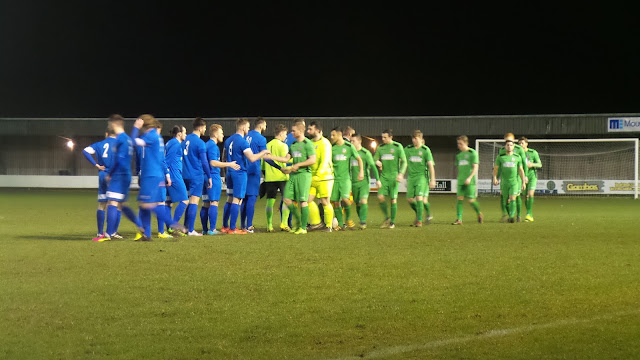 We finally got to the ground moments before it kicked off, with me paying £7.50 for entry and a decent programme. First priority was to get a pint to help relax after 4 and a half hours behind the wheel, and a £3.50 pint of Aspalls did the job. I then went in search of food, initially wanting chips but being told that they don't do them during the week. Instead, I went for the bacon cheeseburger and this was excellent, with decent melted cheese rather than the solid plastic rubbish you get in most places. I'd rate it as the best burger I have had in a football ground. I'd not missed much of the game and joined the others to watch it. Kirkley and Pakefield took the lead against the run of play when they were awarded a penalty on 24 minutes. Nathan Stone was brought down in the area and although the defender looked to have got a touch on the ball, referee Stuart Franklin awarded a penalty. Miguel Lopez stepped up and fired home confidently into the bottom corner of the net. Joel Watts equalised for the hosts six minutes later when he finished from close range following a square ball across the 6-yard box. That's how it stayed until the break and with the second half taking a while to get going, the next goal came when Gorleston took the lead on 62 minutes. It was another cross, this time an unfortunate visiting defender deflected it into his own net although the goal was awarded to Jack Garrod.  Watts got his second and his team's third on 76 minutes when he finished from close range. It had been a deserved victory in a reasonable game for Gorleston, and with that over, it was time to head for home. 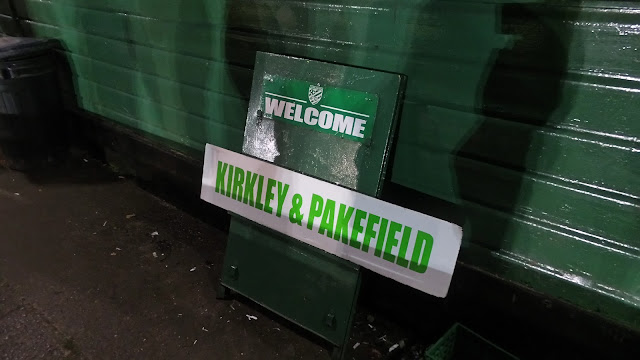 Before we went Dan tried and failed for the second time that night to get a pin badge after another five minute wait in the bar. We were all hungry after that, so headed for a local takeaway called Yummies. I went for a portion of chips for £1.50 and these were decent and generous in portion. I also stopped at Asda in Great Yarmouth to get some fuel and it was there we saw 'Awaydays' Youtuber Ellis getting a bus back home to Gorleston and wondered why he didn't go to the game. It was 10.40 by the time we left, and even after a brief stop so Josh could go to the toilet we still got back to Braintree by 12.10. I'd finished my drop offs ten minutes later and the journey home was good with me getting in at 1.30. I didn't want to go to bed straight away and so after catching up on messages on my phone, I had a couple of ciders with Coronation Street before going to sleep around 3 am. 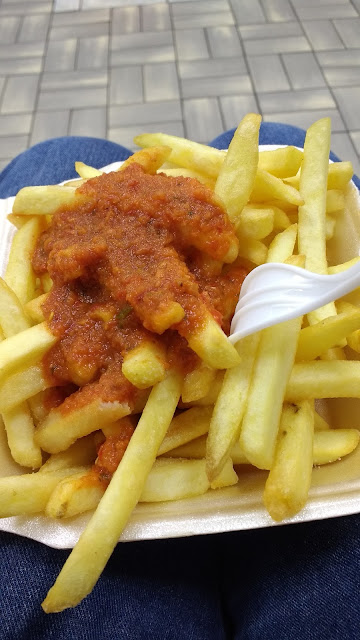 EMERALD PARK is an excellent venue for step 5 with cover on all four sides. Three of these are covered entirely, with the stands even being joined in the corners. There are a couple of hundred seats in total, including a smart executive stand with padded seats which is the only cover on the far side. The overall capacity is 3,000 with around 2,500 of this under cover. The ground looks good to go for step 3 football and even possibly step 2.

The bar at the ground is pretty decent with lots of Gorleston FC related stuff and pennants from other clubs. The ground is around a mile away and has quite a few pubs worthy of investigation of which the New Entertainer looks the best,  There are also a decent array of takeaways. Back at the ground, the tea bar offers great burgers, although it's a shame they only do chips on Saturdays. 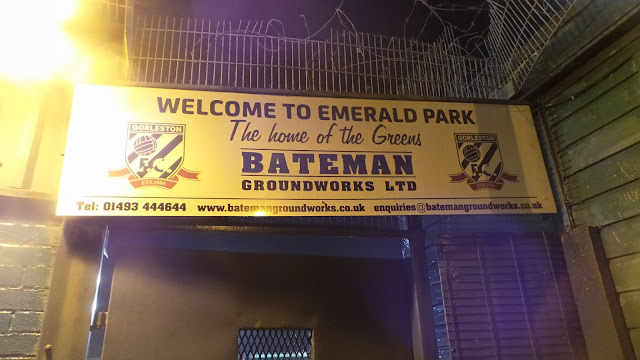 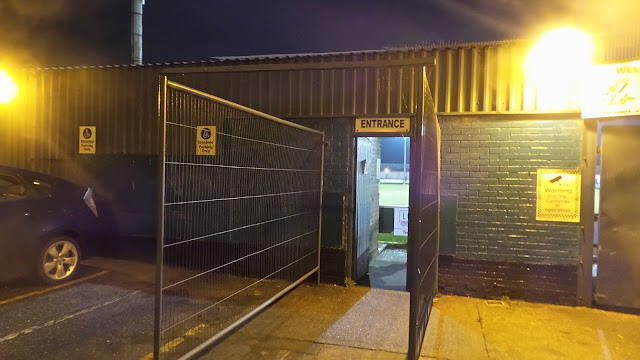 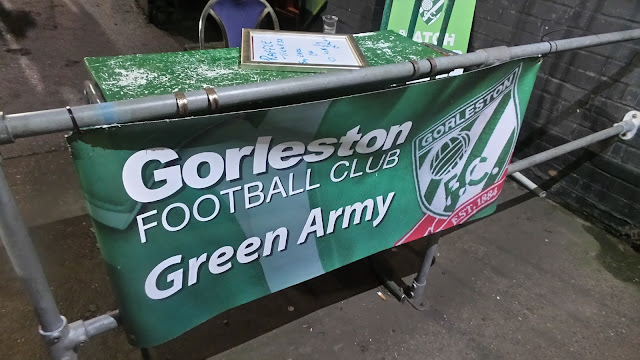 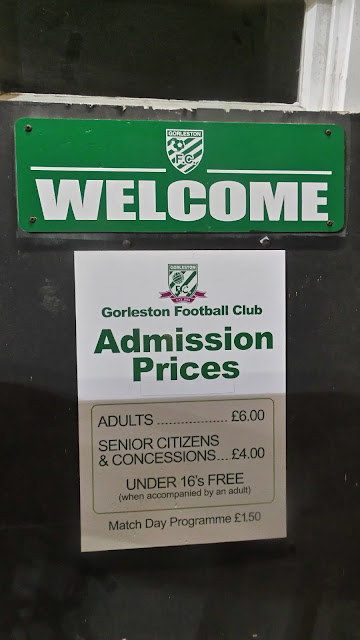 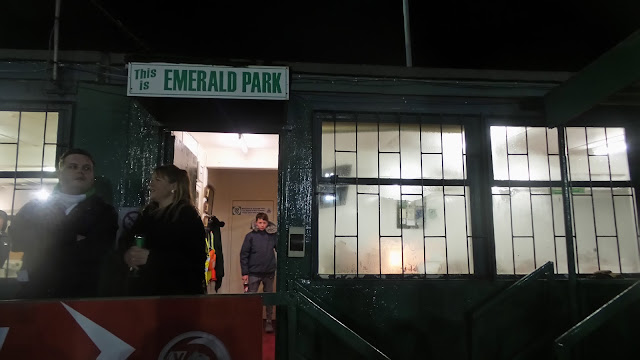 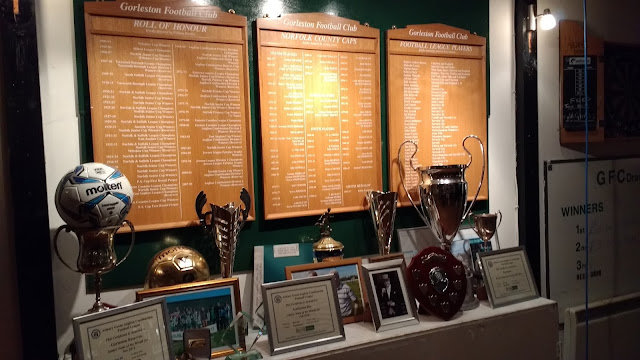 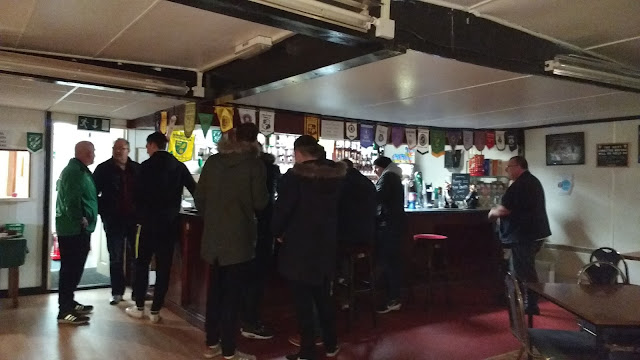 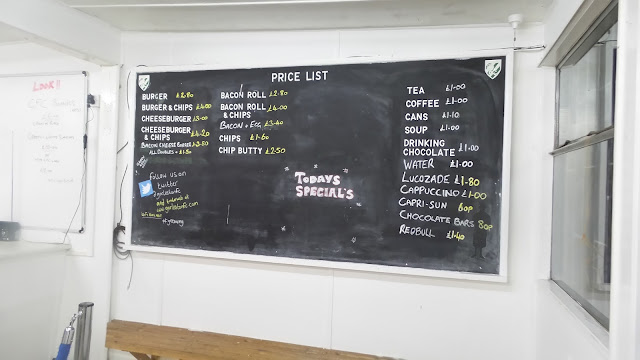 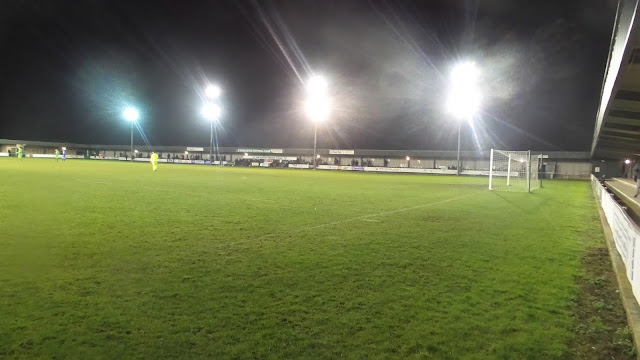 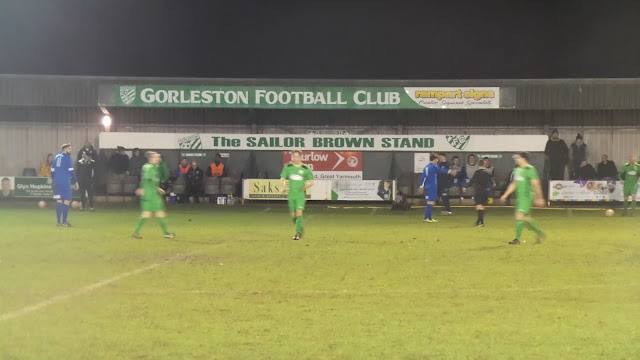 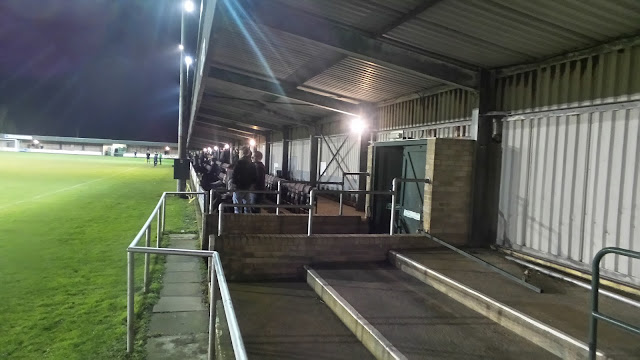 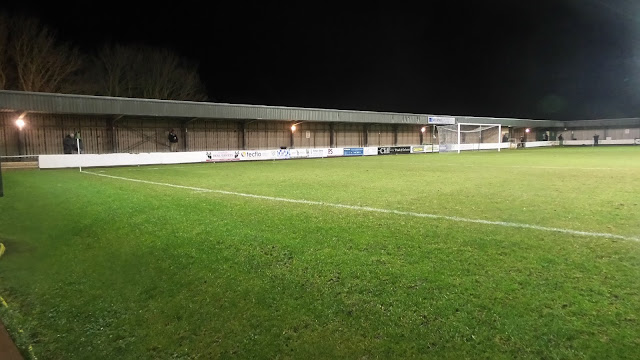 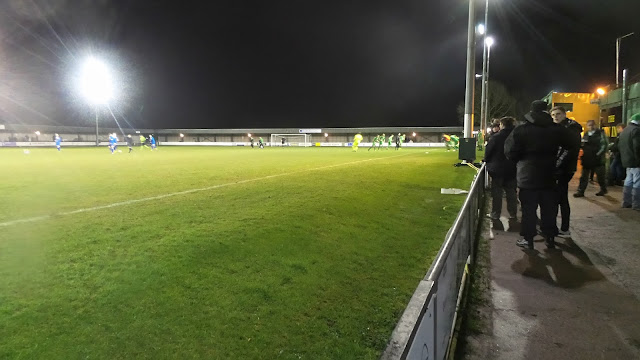 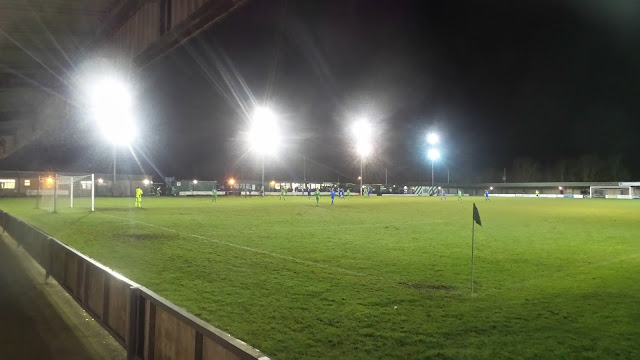 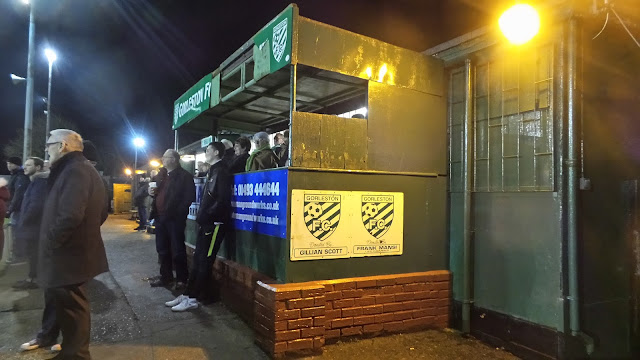