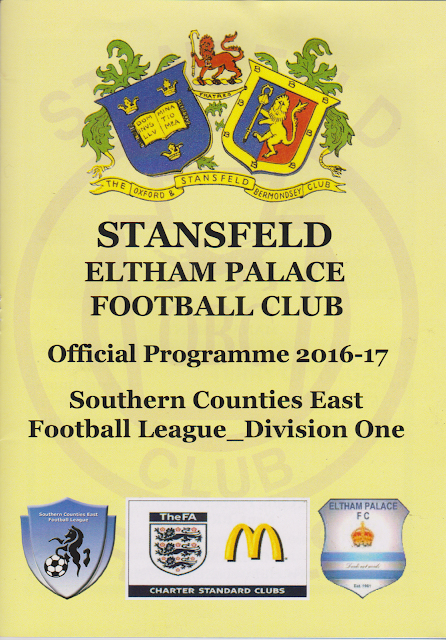 The club was formed in 1961, initially as a team for the ex-pupils of Eltham Green school. After starting out in the South Eastern Amateur League, they moved to the Kent County League. They were generally successful here, finishing as Division 2 West runners-up twice, and Division 1 West runners-up on 3 occasions. 2009 saw a good run of success, being promoted three seasons running, progressing through the Kent County League, and finding themselves in the step 6 Kent Invicta League. Despite having their best-ever finish of 9th in 2014/15, last season saw a lowly 18th placed finish. This season, they are still in the same league, albeit a rebadged Southern Counties East League Division 1.  This season had seen much improvement, with them sitting in 11th before the weekend fixtures, and with an excellent chance of bettering their best-ever finish in the non-league pyramid.

With my parents away, I was keen to make the most of not being committed to being home for dinner by doing as many games as possible. This game ticked all the boxes, with both team's matches being on Saturday's usually, and the midweeks being the standard Tuesday, with a tricky trip around the M25 in rush hour needed. Very occasionally, though, the two clubs who share at Glebe FC were scheduled at home for the same weekend, and this happened to be one of those weekends, with tenants Eltham Palace moved to the Sunday. Another bonus was a couple of decent Micropubs in nearby Sidcup, meaning I could take home something nice with me. There was a bit of confusion over the venue at first, with their ground listed as Sidcup Conservative Club on the very poor Club Website, and a rarely updated Twitter. However, after checking several sources and asking hoppers, it was confirmed that it was being played at Glebe. 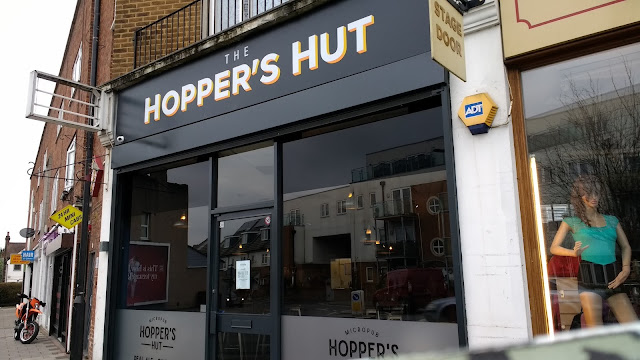 I'd had a good weekend, my 800th visit to Adams Park resulting in a 1-0 win for Wycombe over Portsmouth. However, it was a pretty light week for me booze wise, knowing that I'd eyed up a couple of micro-pubs on Sunday to take something home from. Normally I go out like a light after Match Of The Day on a Saturday night, but for some reason, I didn't get much sleep on the night before the game. Even so, I awoke fairly refreshed on Sunday. I was fairly happy too, as with the boss off, I could do my job without his gerrymandering and interference, and as a result, I was done and dusted by 11.30. There was still some drama though, with the Glebe Twitter account announcing a pitch inspection.  They'd still not made an announcement at 12.10 when I met Anwar, but we set off knowing that we had Erith and Belvedere as a backup if needs be. Finally, 10 minutes into the journey, we got the good news that the game would go ahead as planned. The journey over there was good, with us getting to our stop at Sidcup at 1.45. There I visited the excellent 'Hopper's Hut' micropub where I got a couple of pints of Disco Dudda's cider by Dudda's Tun. It was an ironically named place, given my hobby of groundhopping. After that, I nipped a few doors down and got some southern fried chicken and chips for lunch. It was nothing special but was good value for £2.50. We got to the ground at 2.15, and it was a hive of activity, with several boys and girls teams playing on the many pitches at the complex.  We went and kept warm in the bar with a hot drink for a while, before going into the ground around 20 minutes before kick-off. 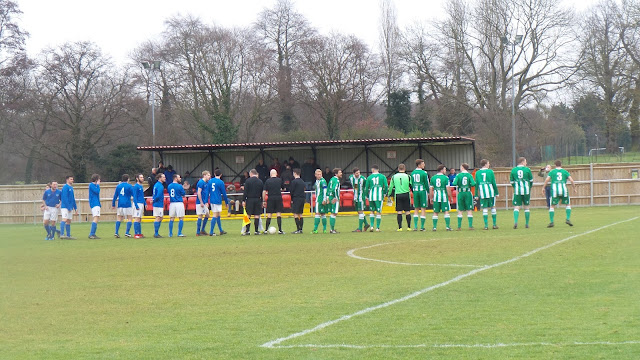 Paying a very reasonable £5 for entry, plus £1 for a very informative programme, we stood along the side by the stand for the game. I learned from the programme that Eltham Palace had been taken over by Stansfeld OBC (Old Boys Club) of the step 7 Kent County League, back in January 2016. So far, results-wise at least, things seem to be going well. Eltham Palace had inflicted Rusthall's only league defeat of the season as they triumphed 2-1 back in the reverse fixture on 3rd December. The Tunbridge Wells-based club looked smart in their green and white stripes but for a while, it looked as they might be facing another defeat to their mid-table opponents as the hosts were having much the better of the game. However, it was the visitors who opened the scoring on 19 minutes when Ian Parsons' excellent free-kick flew in from 25 yards, with me capturing the strike on camera. It was another superb goal a few minutes later, with Eltham Palace getting the equaliser. Good play from the 11 set up number 4 who blasted into the top corner from 30 yards. Rusthall retook the lead after 33 minutes when good setup play and a cross by John Sebbar allowed Parsons to tap home for his second goal of the game. It stayed that way until ten minutes from time when John Philips headed home from a George Rogers cross to make it 3-1 to Rusthall and the visitors completed the scoring when Adam Davies rounded the keeper before slotting home seven minutes from time. Eltham Palace can consider themselves unlucky not to have had a scoreline more in their favour after looking the better side for a lot of the game.


Decent free kick opens the scoring for the visitors, currently Eltham Palace 1-1 Rusthall
A video posted by Russell Cox (@russ_wwfc) on Feb 5, 2017 at 7:27am PST


It had been a really good game for the 67 fans present, with the figure boosted significantly by groundhoppers. It might have been beyond the club's control, but it makes you wonder why more clubs don't try Friday or Sunday games by choice, as prior to today's game Eltham Palace's highest attendance of the season had been 54, and their average 35. Towards the end, I and Anwar had been chatting to a friendly club official to end a good afternoon. The trip home had a few delays, most notably a 20-minute queue to get into the Blackwall Tunnel, but even that couldn't put a dampener on the day. I dropped Anwar home at 6.50, getting home myself twenty minutes later. I cracked open the cider that I'd bought earlier, and it was a real cracker and one of the best I've had in recent times. I cooked myself some dinner to go with it, before watching TV and going to bed at 9.15, what with me being up for work at 4am the next day. 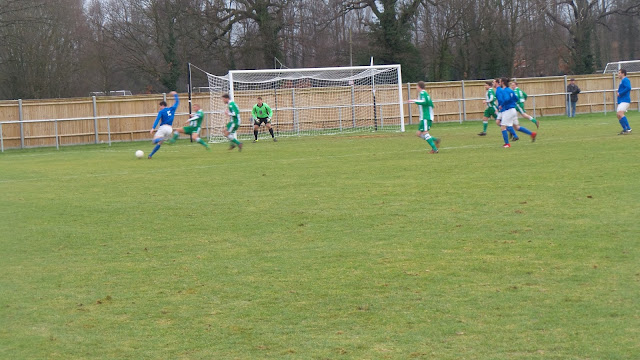 FOXBURY AVENUE is a huge complex, comprised of several pitches which include all kinds of teams from various age group. The main stadium is at the far end, and is a smart, well kept, modern venue. There is just the one stand, the standard metal affair holding around 100. At least they have made an effort by getting it painted and making it a bit more individual. The ground belongs to Glebe FC, and there is also a decent bar at the ground, which is pretty big and shows live TV games. The tea bar is also situated in this building and has a reasonable range of options. 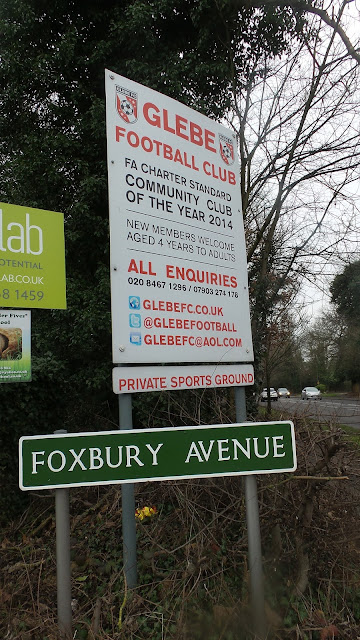 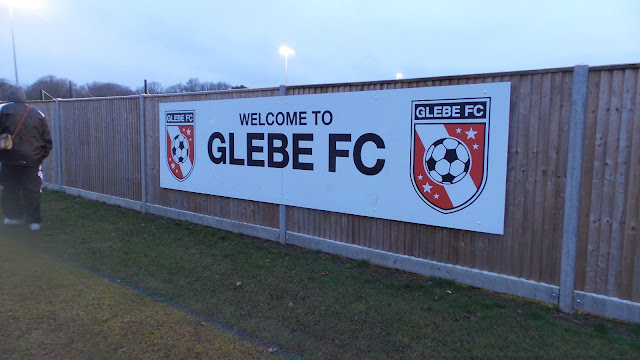 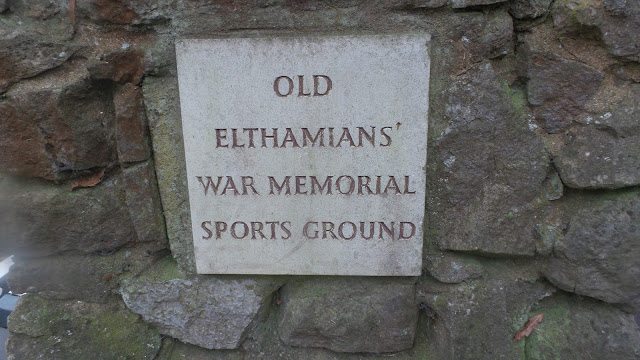 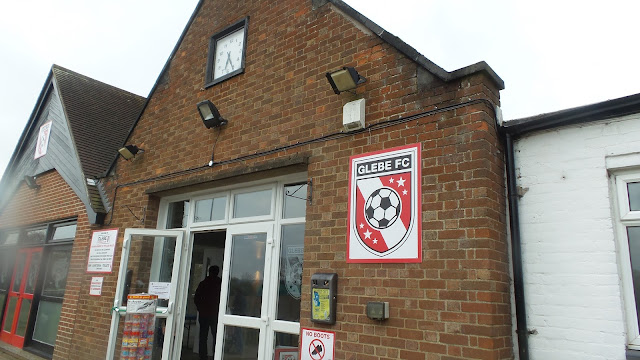 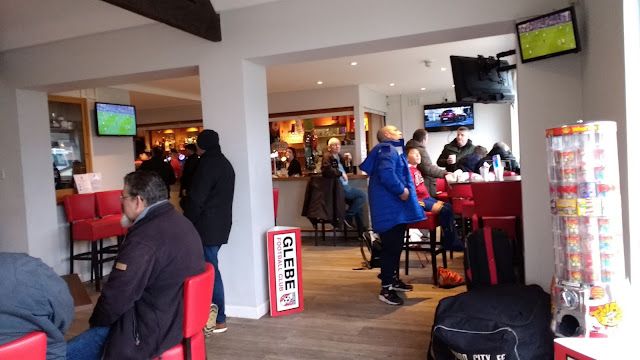 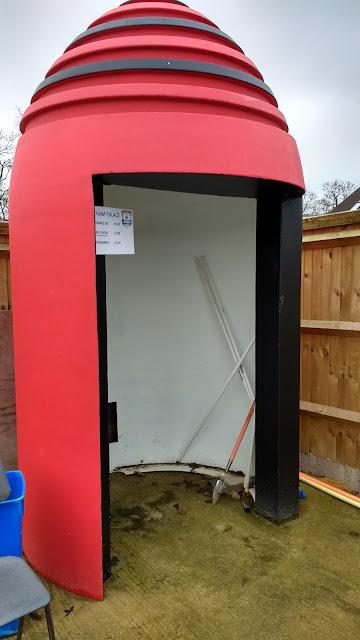 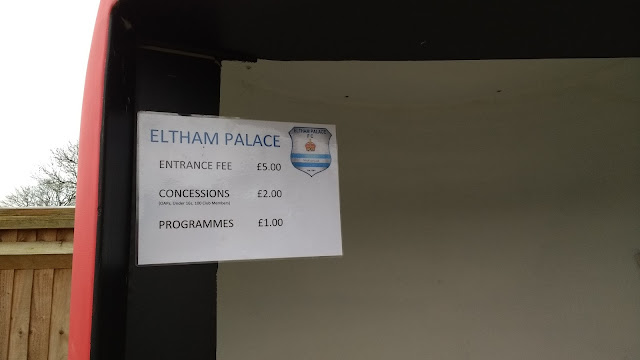 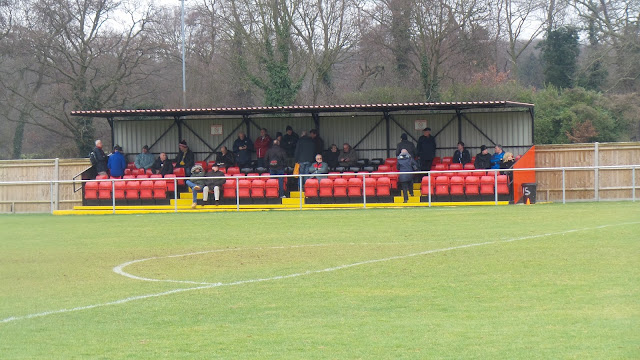 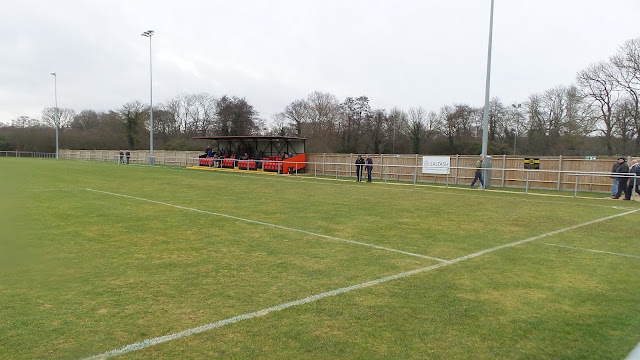 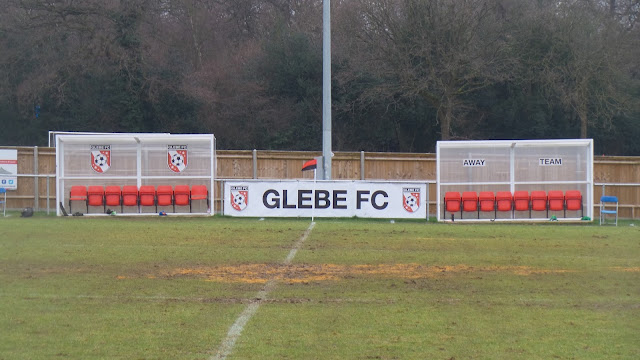 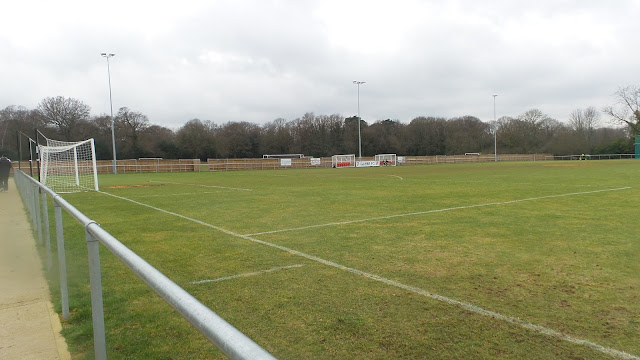 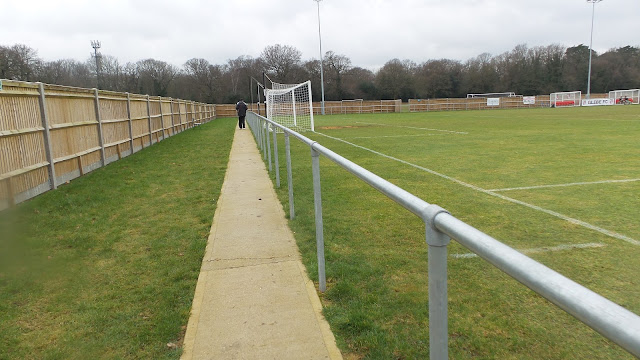 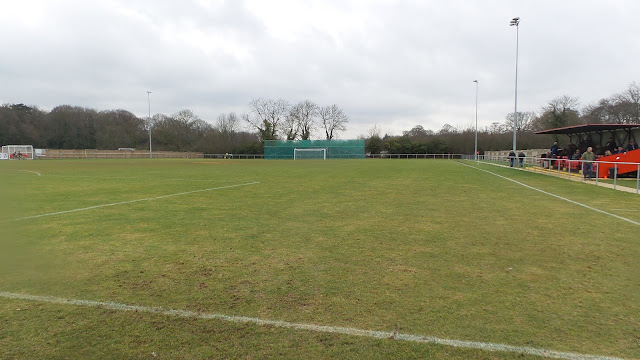 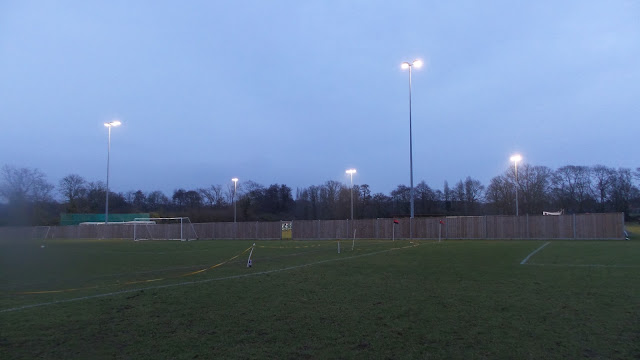