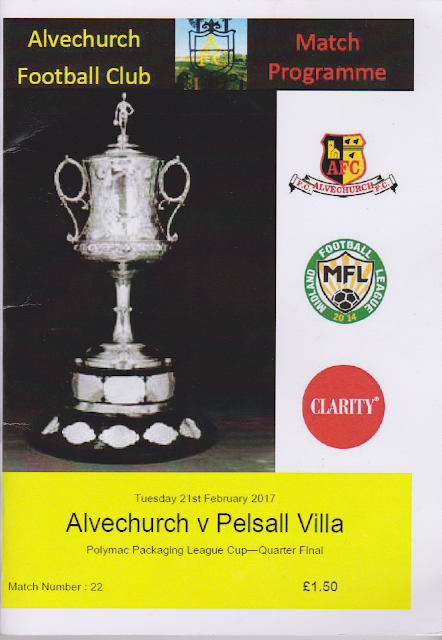 ALVECHURCH FC was formed in 1929. They played in very local leagues up until joining the Worcestershire Combination in 1961. The club was hugely successful in this competition, never finishing below 7th. The league was renamed to the Midland Combination in 1968, but in their 12 seasons here, they were league champions on four occasions and runners-up five times. They joined the West Midlands Premier League in 1973, and the incredible success continued with them being champions for the next four seasons. They'd have to settle for a runners-up spot in the 1977/78 season, finishing a point behind Hednesford Town. This was good enough for them to be accepted into the Southern League. At the time the league was split into two regional divisions, and in 1980/81 they won the Midland section. A two-legged playoff was arranged against Southern Division champions Dartford and after a 3-3 aggregate draw, they were crowned overall Southern League champions after triumphing 4-3 on penalties. The organisation of the non-league pyramid in 1982/83 saw them placed in the Southern Premier and for the first time in their history, the form dipped and they had three consecutive bottom half finishes. Things improved in the mid 80's with Alvechurch finishing 4th in 1986, following this up with 8th and 7th placings in the next two seasons. This didn't last, however, and in 1990, they were relegated to the Southern League Midland Division. Another relegation followed in 1992  and despite a 9th placed finish in the West Midlands Premier, financial worries meant that the club folded at the end of the 1992/93 season.

Alvechurch would be without a football team for a year, but in 1994 a new club, ALVECHURCH VILLA were established. They joined the Midland Combination, changing their name back to Alvechurch in 1996. Despite unremarkable finishes at first, Alvechurch were champions in 2002/03 and were promoted to the Midland Alliance at step 5 of non-league, and they've remained there ever since, albeit in the renamed Midland Premier from 2014 onwards. They enjoyed their best ever finish of runners-up last season, amassing 101 points, but still finishing 7 points behind champions Hereford. This season, they are sitting pretty at the top of the league and barring a collapse, should be crowned champions at the end of the season. 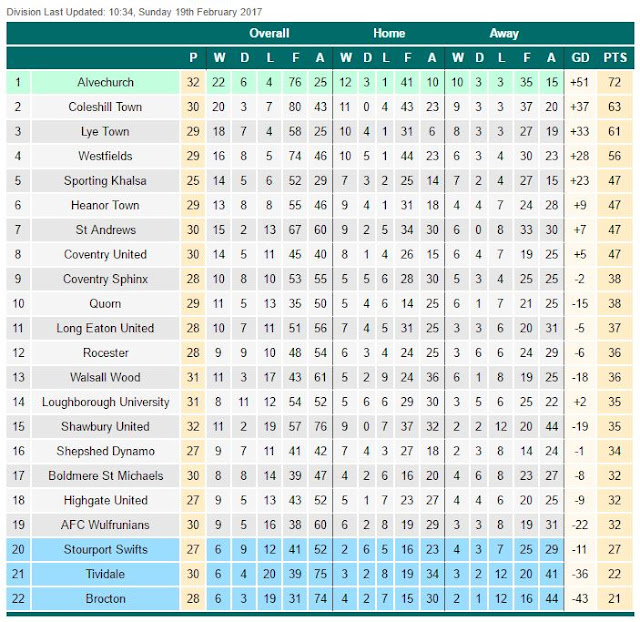 Alvechurch's FA Cup record is mainly notable for having the record amount of replays to decide an FA Cup 4th Qualifying Round clash. Back in the 1971/72 season, it took a total of six games over less than 3 weeks. This duel also included a league game in between, plus the players had full-time jobs to cope with too. There were replays at Birmingham City, Oxford United (twice) before the tie was finally settled 1-0 at Aston Villa.They had to travel to Aldershot a couple of days later. Unsurprisingly, they were knackered and lost 4-2. As remarkable as that run was, they eclipsed that a couple of seasons later when they reached the 3rd Round.Starting in the 1st Qualifying Round, they battled through seven rounds, beating Football League side Exeter City along the way, before going out 4-2 at Bradford City.

Other notable cup runs include a run to the FA Amateur Cup semi-final in 1966, where they lost 1-0 to Wealdstone in a game played at Chelsea. In the FA Trophy, Alvechurch reached the 3rd Round of the FA Trophy in 1981 whilst last season they had their best run in the FA Vase, reaching the 4th Round before losing to Cleethorpes Town. There have been various local cup wins, the most notable of which is a hat-trick of Worcestershire Senior Cup victories. A host of famous players have played for Alvechurch including Rob Green and Graham Allner although the most well-known is former Leicester City and Arsenal striker Alan Smith. The village of Alvechurch has one unwanted former resident - Tracie Andrews who stabbed her boyfriend Lee Harvey 42 times in December 1996, before trying to blame it on a fictional road rage killer. She went on to serve a 'life' imprisonment term of 14 years for her crime.


Originally, I'd arranged to go to Downham Town v Diss Town on this night, but due to the away side progressing in a local cup, fellow groundhopper Chris and I would have to head somewhere else to get our Tuesday football fix. I texted Chris a list of alternative options on Saturday night, and he picked out Alvechurch v Pelsall Villa in the Polymac Packaging League Cup. I was pretty happy with this as I'd remembered seeing a decent looking pub near the ground when doing research a while ago. Sadly, The Weighbridge was closed for refurbishment on the day that we were visiting so we would have to seek an alternative. Luckily there looked to be a few decent takeaways, but any hope of a decent cider within walking distance of the ground had been knocked on the head. I did draw up a couple of alternative plans, but a lot of it would depend on the traffic being kind to us.


Work had certainly been a lot more tolerable lately, but even so. I was looking forward to my day off. I'd had a patchy night's sleep the night before, but even so, I felt pretty refreshed when I woke around 8. In the morning, I walked down town and got a few things before coming back and spending a lazy afternoon googling various step 7 grounds to see if they are worth visiting. It helped that there were a few blogs where hoppers had been to games there, which helped me sort the wheat from the chaff. After getting my things together, I left home at 3.55, getting to Milton Keynes to meet Chris at 4.50. He didn't finish until 5, so I had a 10-minute rest and time to start my blog for tonight. Chris was out at 5.05 and miraculously it was a great journey with barely any delay. The soundtrack on the way up was Abbey Road, which is both myself and Chris's favourite Beatles album, with a number of feelgood tracks on it. Before the game, I'd arranged to stop at a pub in Finstall called the Cross Inn. What Pub website listed them as having a local cider from Bromsgrove called Tardebigge. However, the landlord has stopped stocking it due to the cost, but a pint of Black Rat was a great substitute, even if it was a retry. It was a great pub, a real friendly local place and traditional pub that is all too rare nowadays. From there we made our way to a Chinese takeaway called Trans, situated around half a mile from the ground. There I had Salt, Chilli and Pepper chips with some chicken satay. It was cracking, and probably the best Chinese takeaway I have ever been to, with great portions and tasty food. 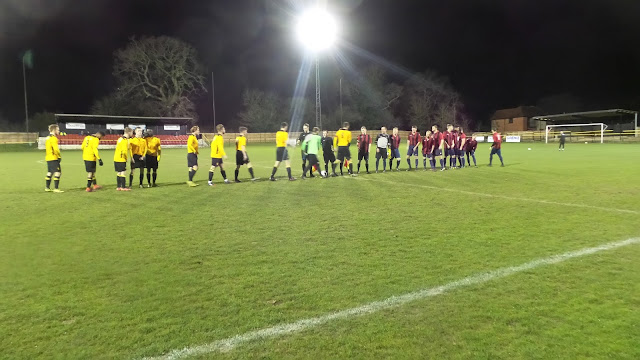 After eating our dinner in the car, we made our way to the ground, arriving at 7.35. Entry was £6 and the programme £1.50. The latter was a decent effort for a one-time buyer, with a comprehensive history of the club, which made for interesting reading. The short time before the match was spent getting some updated pictures of the ground. The game itself started at a decent pace and the hosts were 1-0 up within 5 minutes when Jamie Willets headed in from a curling cross, with the ball hitting the right-hand post on the way in. It was all square a few minutes later, Ryan Wilkins slotting a loose ball into the bottom right hand corner to square things up for Pelsall Villa. Daniel Dubidat restored the hosts lead on 12 minutes with a peach of a volley after a free kick was headed on. The same player got his marching orders minutes later, and it was a strange one. The tackle seemed to be a ball winner and the player went without protest, but I guess it's modern rules where any potential imjury is considered to be a sending off.  This could have spelled a Pelsall Villa comeback, but it didn't materialise despite them having some chances. Alvechurch made it 3-1 six minutes before half-time when Ryan Edmunds finished off a jinking run when his powerful low shot went in off the post. The second half saw fewer chances but Ryan Edmunds got his brace when he converted a penalty. That was it as far as the scoring was concerned, but it had been a great game and an enjoyable night.

We left the ground at 9.40 and headed home. There was more talk on the radio about Wayne Shaw, the Sutton United substitute keeper who had wound up abusive Arsenal fans by eating a pie on the touchline. There was a whole load of fuss as a betting company had offered odds of 8-1 on him eating a pie on camera and people were whining about him breaking betting rules after he tipped off mates. My view is, that if a bookie is going to be so disrespectful as to offer odds on a fat bloke eating a pie, then they deserve all they get when they lose due to a common stereotype. The keeper resigned the following day, after being forced to do so by Sutton United, and I think it's a shame that the club and game have lost a great character. There were a couple of road closures on the way home, but even so, I dropped Chris off by 11. I got home myself 40 minutes later, staying up for an hour or so before going to sleep. 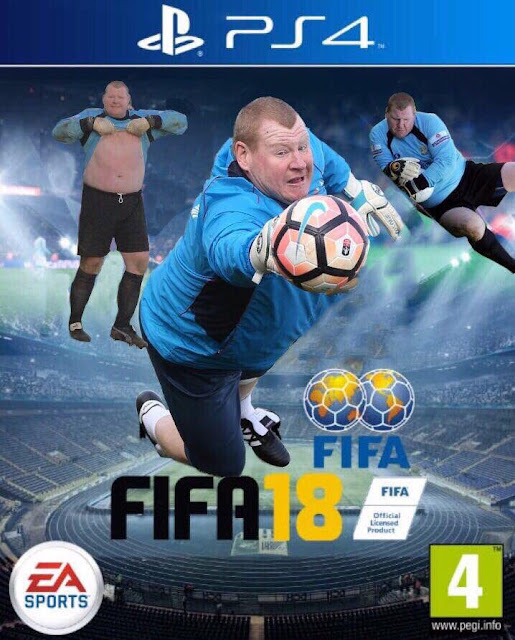 LYE MEADOW is a ground I visited prior to a Wycombe game, sometime around early 2004. The ground was all locked up but a helpful local resident let me in through their back garden to get a shot of the main stand. The ground has an official capacity of 3000, of which the stand, holding around 200 is the only cover. At least that was the case on my first visit.

The second visit had seen a wooden fence added around the ground, and also some new cover behind the goal which had some interesting and extensive terracing. The bar was pretty smart, with club memorabilia on the walls. The burger van was also decent, serving up a generous portion of chips for £1.20 amongst other things. The town is around half a mile away and has a Chinese, a chippy and Indian and a few pubs, of which the Weighbridge looked the best. Sadly it was closed on our visit, and opens at 7pm for midweek games, so time would be tight unless you do a Saturday game 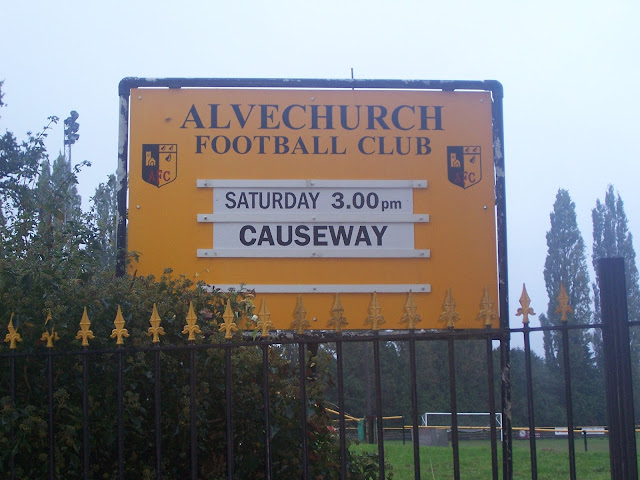 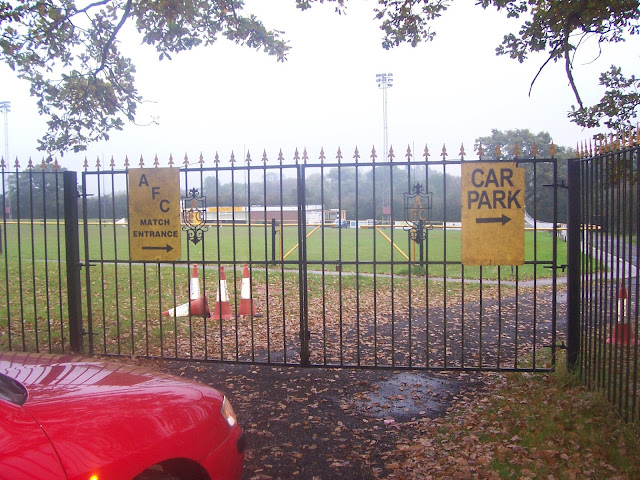 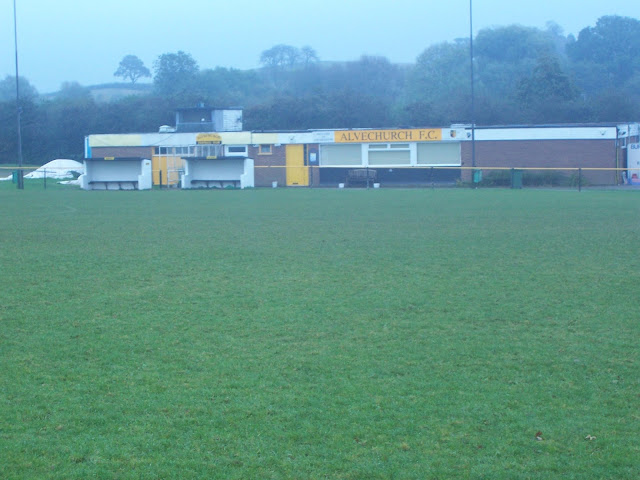 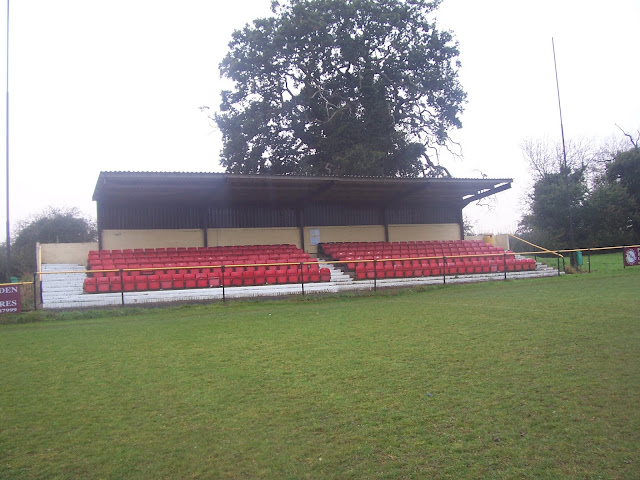 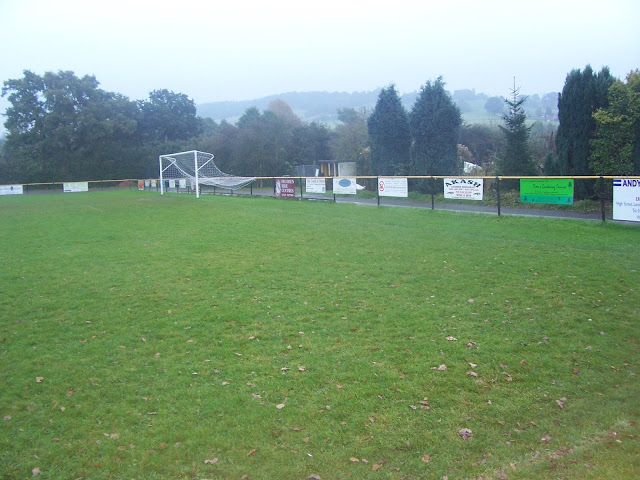 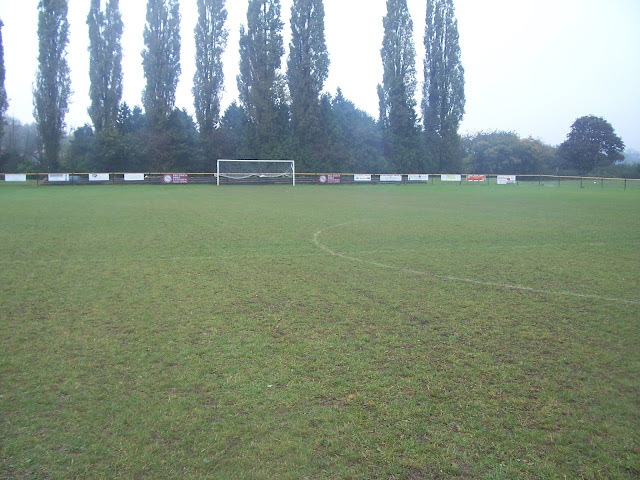 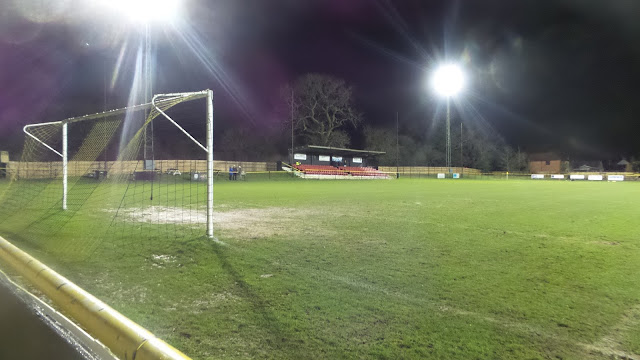 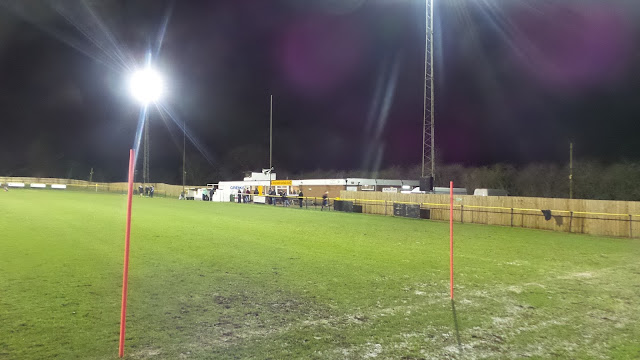 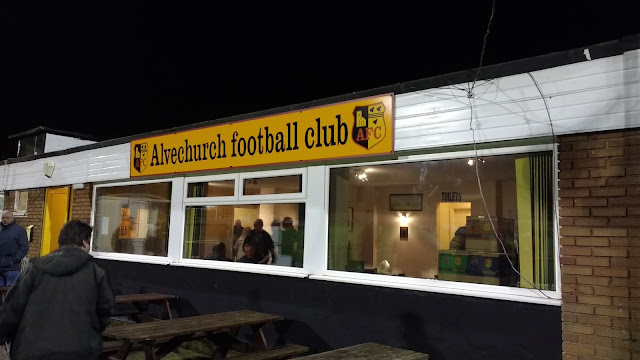 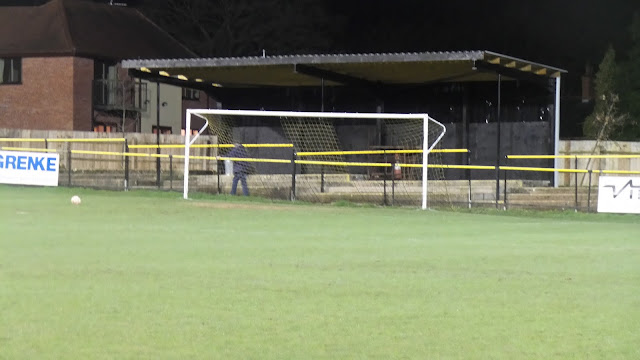 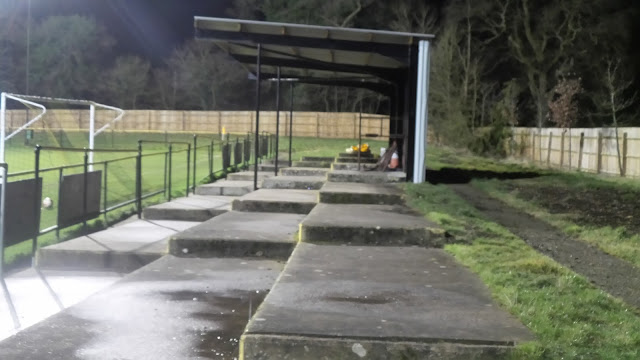 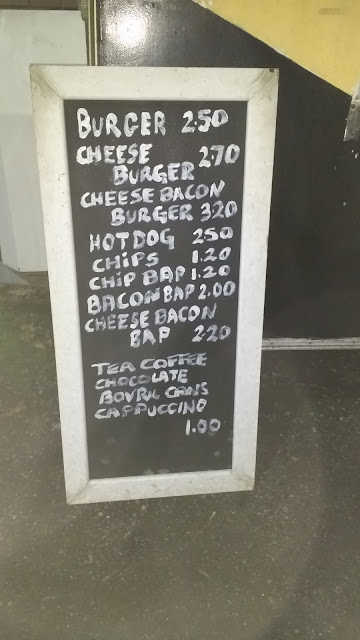