1:  Heart Of Midlothian FC were formed in 1874 with their origins being from a local dancing club.

2:  They are currently Edinburgh's only top flight club with arch rivals Hibernian languishing in the Scottish Championship and Edinburgh City recently promoted to the Scottish League 2 after being in the Lowland League.

3:  Hearts have won the Scottish League Championship on 4 occasions, the last being in 1960. They have also been runners-up 14 times with the latest occasion being in 2006.

4:  The Scottish Cup has been won on 8 occasions. Their last victory came in 2012 as they hammered local rivals Hibernian 5-1 in the final at Hampden Park.

5:  Hearts have won the League Cup on 4 occasions, though not since 1963 when they beat Kilmarnock 1-0 in the final.

6:  The club have been regular participants in European football. Their best season came in 1988/89 when they reached the UEFA Cup Quarter Final. Despite beating Bayern Munich 1-0 at Tynecastle they lost the tie overall after a 2-0 defeat in Germany.

10: Hearts record incoming transfer fee is £9M. This occurred in 2007 as they sold goalkeeper Craig Gordon to Sunderland, a record fee for a British goalkeeper at the time

For the second part of my Scottish European adventure, I was off to Hearts. I was hopeful that they would beat Infonet Tallinn in the prior round and was pleased when they prevailed over 2 legs. Tickets took a while to be put on sale, but when they did I got one of the better seats near the halfway line as opposed to the game at Celtic when availability had been restricted to behind the goal when I purchased. It was a superb value £12 for my ticket, though the admin fee of £1.50 to pick up at the stadium was a bit naughty. I got a good price on a hotel in nearby Leith for £29 and was looking forward to a trip to the Scottish capital. Hearts were facing Birkirkara of Malta with the  game still finely poised with the first leg being drawn 0-0 in Malta the previous week. 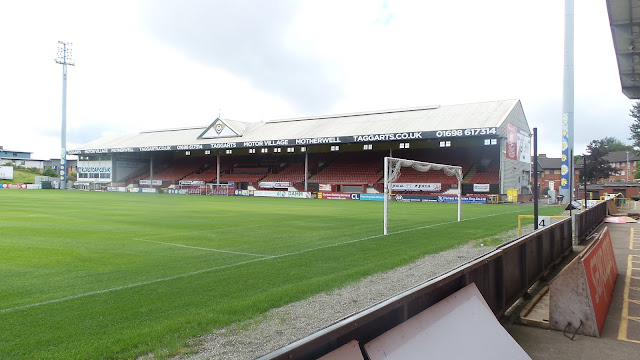 I woke up just before 7am and after catching up online I typed my blog from yesterday on my iPad. After getting ready I went over to the hotel for my breakfast,  especially enjoying the potato scones. After getting my stuff together I had a mile walk back to my car though mainly pleasant parkland. On the way out of Glasgow I stopped to get pictures of Partick Thistle and Rangers.  At the former I managed to get inside and it turned out he knew someone from Wycombe and remembered Steven Craig playing for us. I also went to Rangers and Hibs but was unable to get in to those grounds.  I  arrived at my hotel just before 1 and with an hour to kill I went to the local Wetherspoons,  The Foot of the Walk in Leith.  It was pretty busy but there were none of the 3 ciders that I needed -  instead I had a pint of the Down Down cider that had been made in collaboration with Status Quo. After that. I went to some shops and got a paper and some lunch. By now it was time to check in and I spent an hour in my room to allow my phone to charge for a bit before going out at 3.30. 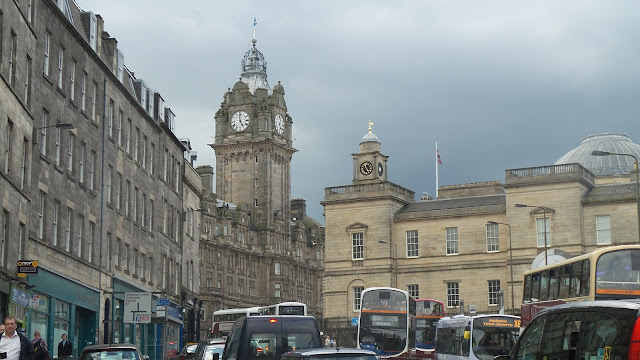 I walked into Edinburgh, first stop my 95th Wetherspoons, The Playfair. They didn't have any of the 3 elusive ciders that I needed but I fancied a rest. I had a fairly light one, the Dark Cider The Moon at 4% while I browsed the news in the Daily Star. Another Wetherspoons was on the cards on my boozy week off , this time I ticked number 28 of the festival. Garden Cider Vintage had taunted me by being listed as available but then not so on a couple of occasions so it was good to get it ticked. The Standing Order proved unsuccessful at providing me with the elusive 2 that I needed but I did at least have a pint of something Scottish. Thistly Cross Traditional was very drinkable at 4% and it signalled that once finished, it was time to make my way to football. 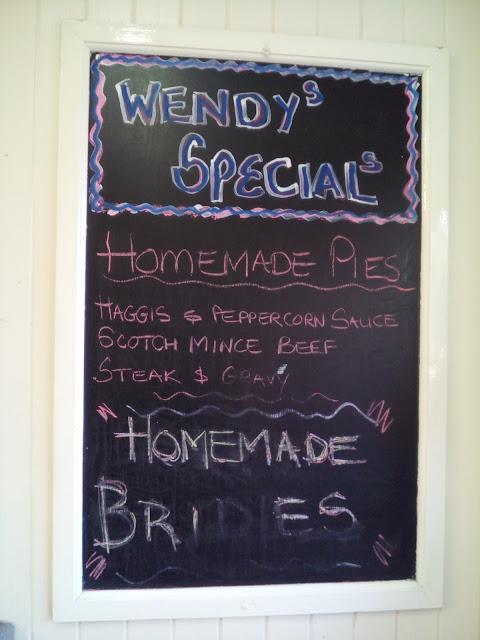 I stopped for food along the way, having a great Haggis and Peppercorn Pie along with chips for £2.60. I also bought a match scarf and a Hearts canvas bag before picking up my ticket. I got in with half hour until kick off, happy with the view from my seat and posting some pictures online. The first half was edged by the home side and they had a well placed penalty saved that just didn't have enough power on it. At the start of the second half Hearts piled on more pressure but just lacked that bite. As so often happens , the team that were under pressure got a break and it was a smart finish that put them ahead. Hearts rallied for an equaliser without having anything clear cut and they were caught again on the break as they piled forward. This goal was an even better effort, giving the home keeper no chance. At last they woke up and started creating, smashing the ball against the woodwork for the second time and finally reducing the arrears from close range. There had been quite a lot of booing from the home fans their night was summed up when they won a free kick near the end. It was by no means a huge chance of scoring but they didn't even test the keeper, smashing the ball high into the stand behind the goal. 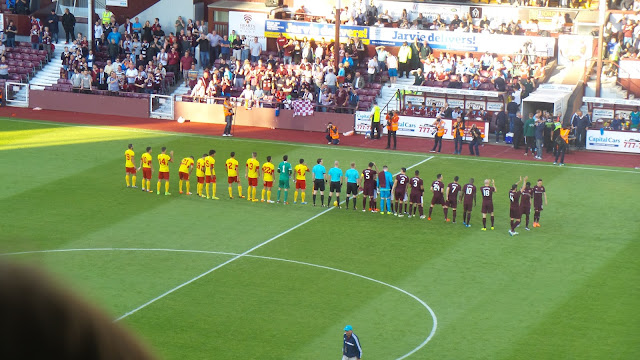 I got some more pictures at the end, including from around the other side. I saw some of the 56 fans that had travelled across from Malta and shook hands with a few. I then walked back into Edinburgh, hoping to find the last 2 ciders that I needed. The Alexander Graham Bell came up trumps with the Texan Style Cornish cider with just the Driftwood to try, which I have not seen any sign of at all. While I was having my pint, I typed my blog and caught up online. It had been a good evening, despite the result. I always cheer the British team on with a few exceptions when it's a European game. Rather than walk the 2.5 miles back to my room I instead got the bus for a very reasonable £1.60. It was nice and quick and dropped me right outside my hotel at 11.30. I watched TV for a bit before going to sleep around an hour later. 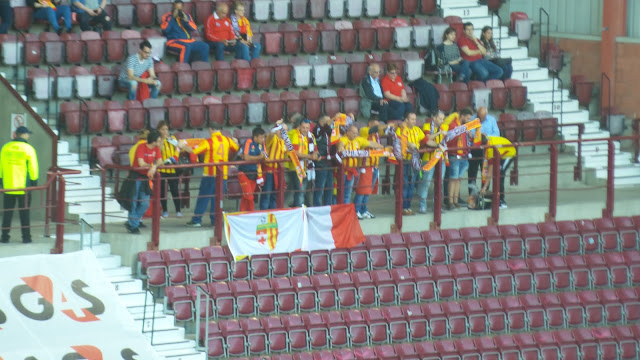 TYNECASTLE is a decent stadium for a club of Hearts size and suits them perfectly. The ground is a reasonable walk from the city centre which has loads of choice, plus there is a good selection in the immediate vicinity of the ground. An all seated stadium there are 3 new stands which replaced terraces following modenistation, plus the older main stand. 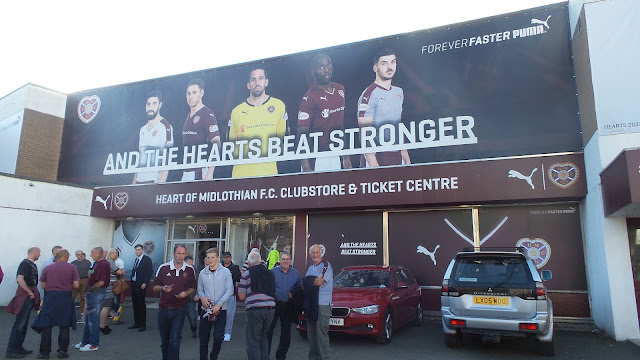 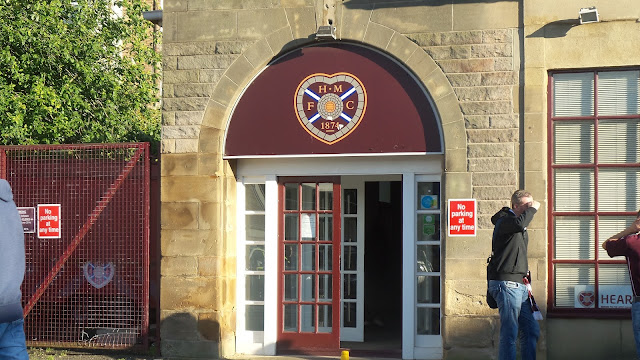 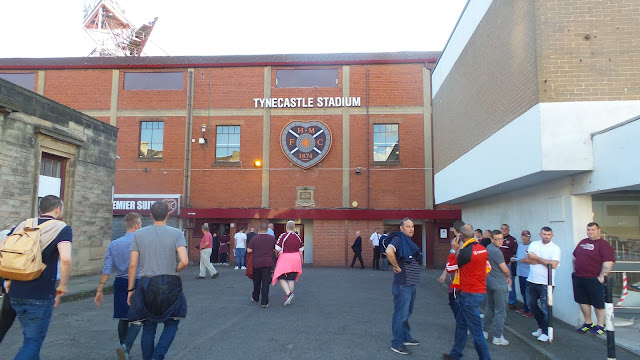 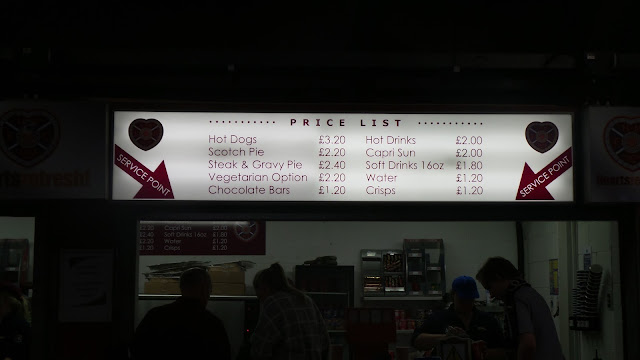 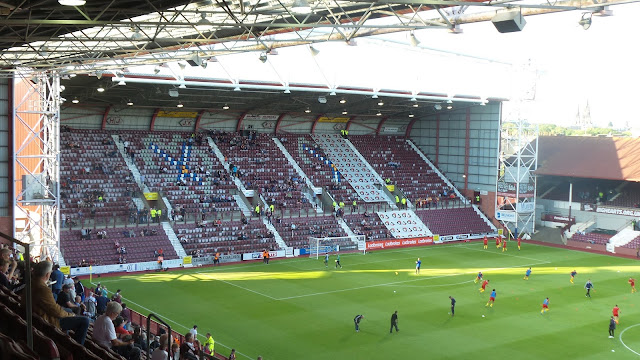 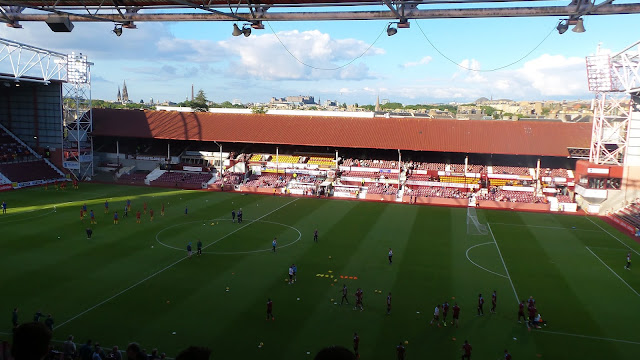 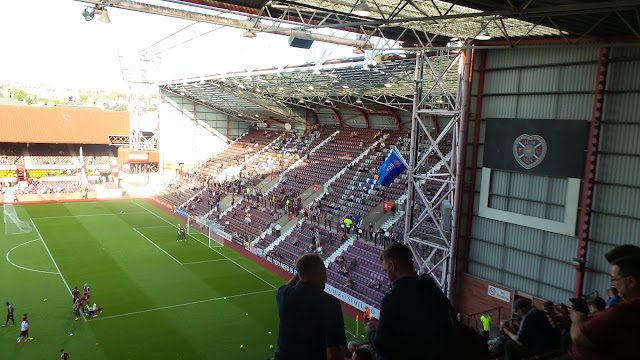 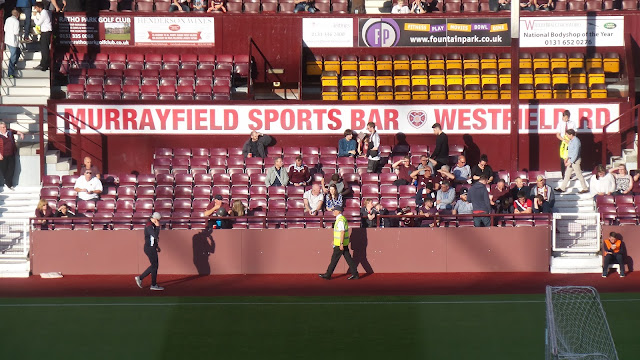 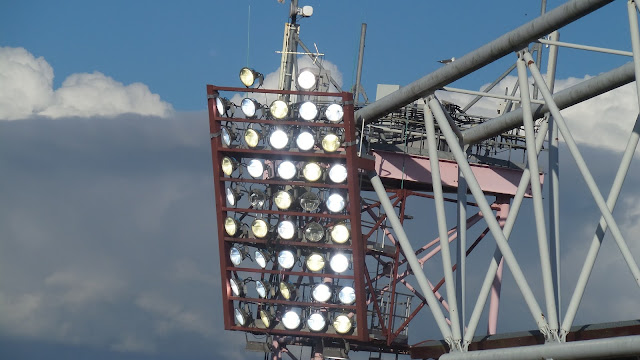 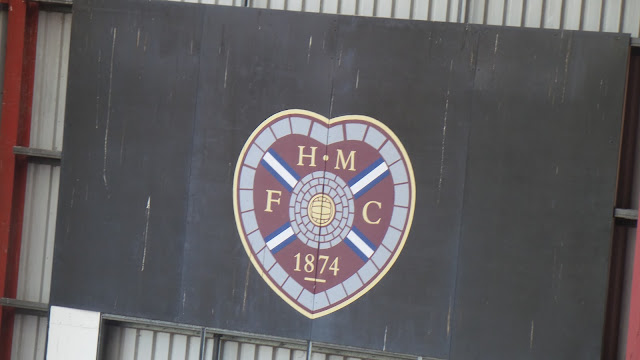 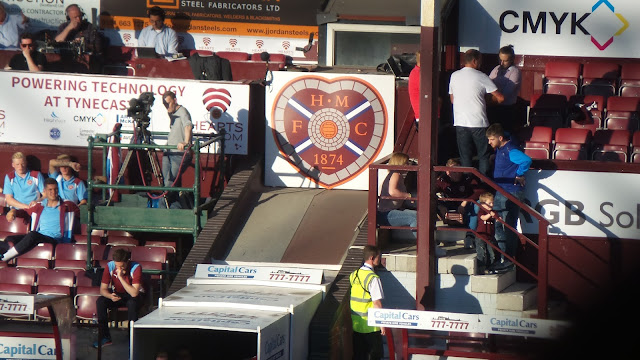 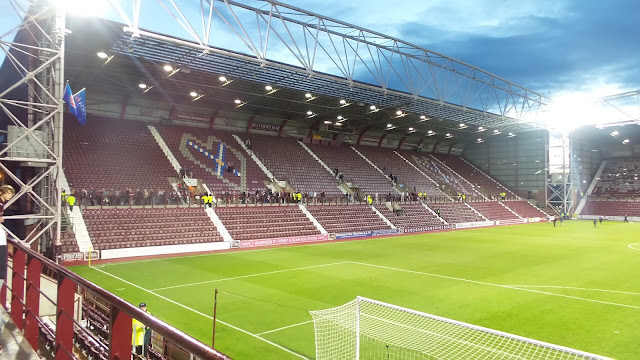